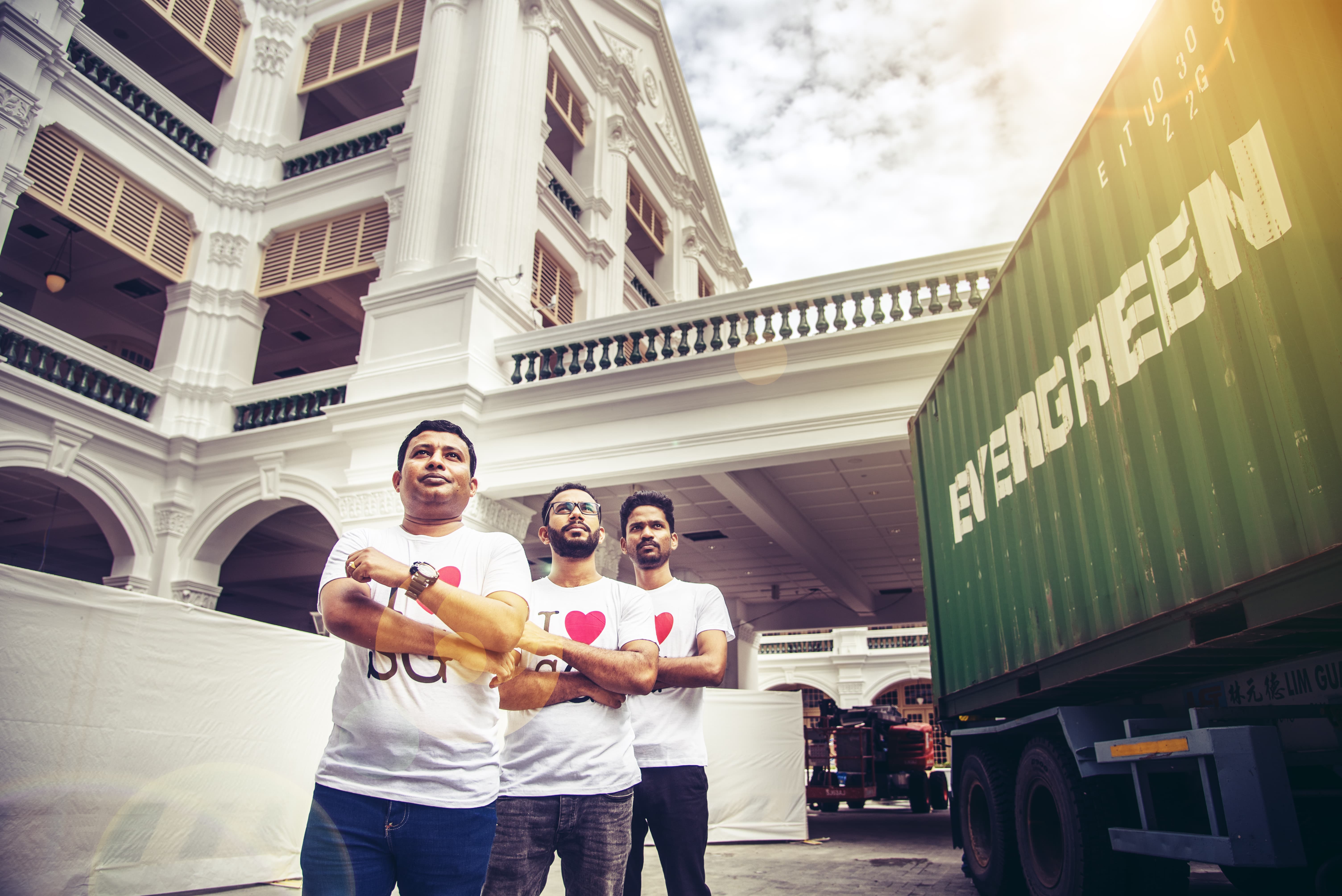 In the now immortal words of Dick Lee as sung by Singaporeans everytime August comes around, “this is where I won’t be alone, for this is where I know it’s home.”

But as much as it’s nice to imagine that we live as one Singapore, it’s important to remember that reality isn’t often as rosy as National Day songs might lead us to believe, and far too much of the time, we forget the marginalized, a growing minority who fall between the cracks and don’t belong, as ‘Home’ so proudly proclaims.

In the case of artist Sean Cham’s This Is Where, the 24-year old photographer has chosen to zoom in on the plight of migrant workers across all industries working in Singapore today. From the Filipino domestic helper to the Bangladeshi construction worker, Cham’s project, presented as part of the 2019 M1 Singapore Fringe Festival, brings these invisible figures into the light through a series of satirical photos.

Meeting Sean at Plain Vanilla in Tiong Bahru over a cupcake, the young artist explains the origins behind This Is Where. On how the work relates back to the theme of Still Waters this year, Sean explains: “I looked at Suzann Victor’s work and looked at the idea of objection and how things are often overlooked. In some sense, migrant workers fall into that abject status, often hidden behind safety barriers, sound panels, their homes, yet they’re instrumental to the entire system, and without these guys the entire system just fails.”

Says Sean: “I was thinking about how we glorify and fetishize icons such as majies or coolies, who were themselves migrants, yet today, we marginalize and chastise the new foreign workers. In a sense, This Is Where is an extension from my 2015 project titled Singapore Dream, which was about how the aspirations of migrant workers contrast the realities they face today.”

Sean recounts one of the subjects he met: “Back when I was doing that project, I encountered a construction worker who dropped out of studying medicine to come to Singapore and earn money when his father was hospitalized. While there was a sudden spike in discussion and coverage of their issues back then, not much has actually changed from then to now, and I wanted to continue that conversation with my work. My aim isn’t so much to find the injustice of the system, but more of shedding light on some of the issues these migrant workers happen to be facing.”

Part of the cheeky satire lies in the medium chosen for this work; displayed on various JCDecaux boards around bus-stops in Singapore, each photo is overlain with text that pokes fun at existing ad campaigns, such as a piece depicting two men at Maxwell Food Centre eating simple rice and curry, with text suggesting that Singapore is a food paradise, parodying tourism ads featuring more uniquely Singaporean foods such as Char Kway Teow or Bak Chor Mee.

“I’m hoping people take a closer look at these images and have a think about the issues migrant workers face everyday,” Sean continues. “There’s this image of three workers toasting over Red Bull, and actually, it’s based on this anecdote where I found out many of them eat only substandard packed food from their companies that doesn’t provide them with enough energy to go about each day, and many end up relying on Red Bull to give them cheap sustenance. Because of the copious amount they drink, many end up facing health issues, yet it’s a Catch-22 situation where they need to drink it for their own survival.”

On the process of finding his subjects, Sean explains his method: “I actually featured a few of the workers I previously worked with for Singaporean Dream, and after approaching them, they helped me by inviting their friends who were interested in getting involved, and there was this ripple effect after. My relationship with them isn’t just artist to subject – they’re not objects to be used to make a point, and it was important for me to understand them as people and build up that relationship of trust, like over coffee before a shoot and find out about their lives and using those anecdotes as inspiration for the final image itself. Even after the shoot, we develop a kind of friendship, and I catch up with them, and attend events with them, like the Migrant Worker Poetry Competition.” 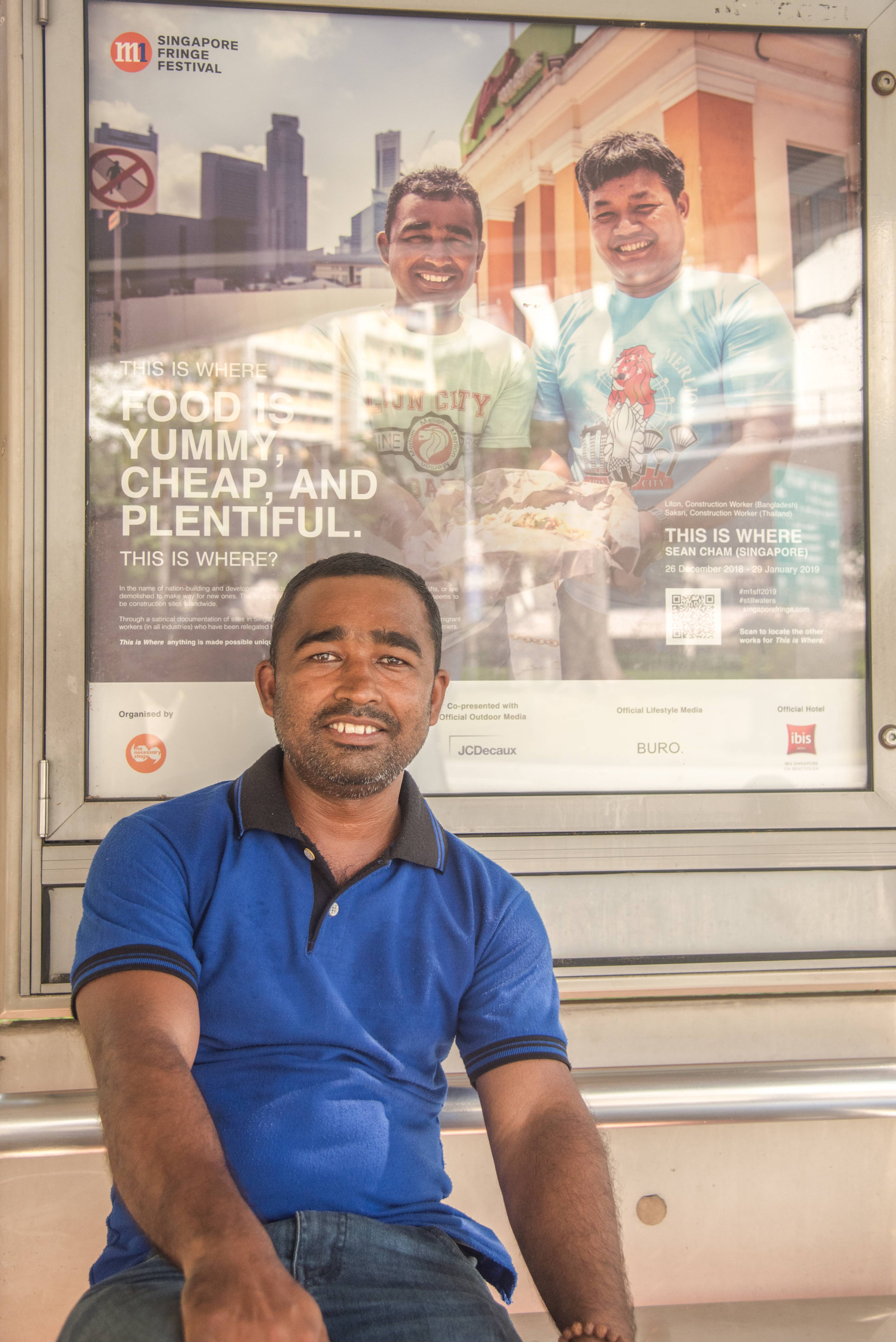 This Is Where won’t be the only thing Sean is working on in 2019 – he’s currently in the midst of working on another new project, titled First Storeys, to be presented in March as part of The Future of Our Pasts Festival 2019. “I’ve always been interested in telling stories,” Sean says. “And this work is my own way of navigating these politics and understand my country better, and share my own views with other people. Some part of me feels it’s incomplete or still has a long way to go; I did want to feature more variety in my series, like how I haven’t managed to feature any Chinese nationals, and even within each nationality, there’s such a wide range of challenges and personalities. To me, inclusivity and capturing that diversity of voices is so important. Maybe I’ll continue exploring that in future.”

But for now, he’s happy and hopeful that This Is Where can make its own impact during the fringe. He concludes: “This Is Where is about questioning the state of affairs in Singapore, and through putting it up in such publicly accessible, everyday spaces, I’m hoping more people in the streets, people who may not access these kinds of subjects online or on social media will be made aware of it, and question their own sense of this ‘Singapore identity.”

This Is Where is displayed across various JCDecaux bus shelters from now till 29th January 2019. For more information, visit the website here

0 comments on “M1 Singapore Fringe Festival 2019: An Interview With Sean Cham, Creator of This Is Where”