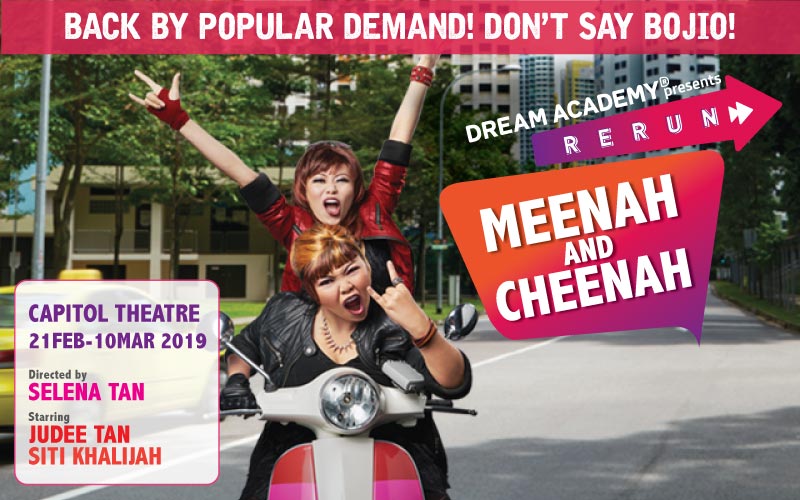 In light of a certain recent incident involving a Chinese person ‘trapped’ in a car, it feels like an act of clairvoyance was involved in Dream Academy’s timely decision to restage smash hit comedy show Meenah and Cheenah. Reprising their roles from the 2016 run are local actresses and dynamic duo Siti Khalijah and Judee Tan, playing the eponymous ‘Meenahs’ and ‘Cheenahs’ respectively. 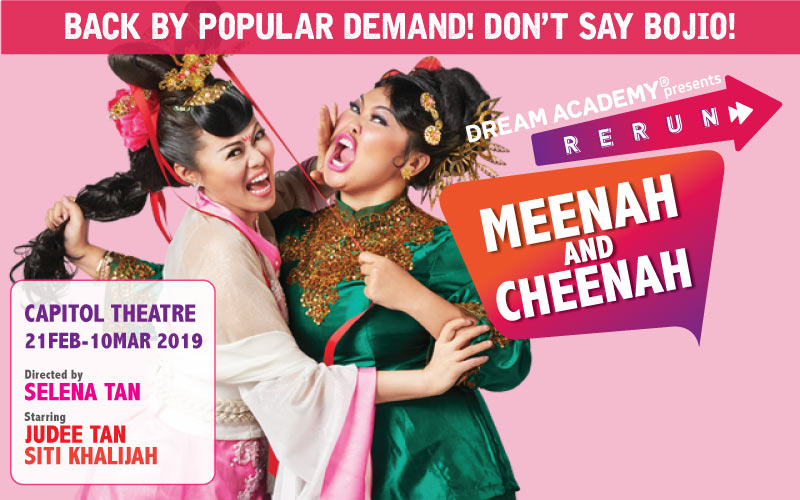 On the decision to restage the production rather than create a new edition, Dream Academy Artistic Director and Meenah and Cheenah director Selena Tan says: “While we’ve updated some of the skits, Meenah and Cheenah is essentially a rerun of the same show we presented back in 2016. Of course, much like an open goal, there were some recent incidents that were just asking to be incorporated into a skit. There’s a lot of good things already going for it, so we wanted a bigger group to come see it, what we think is a seminal work, before going straight into a sequel.”

She continues: “This is a show that I think will have a very special place in Singaporeans’ hearts. See, it’s not a tough sell at all once Judee and Siti get onstage and perform – the laughs come easy, the material resonates and there’s an element of truth in it that touches each audience member’s heart.”

If you missed the 2016 run of the show, then it’s high time you get your tickets to this hilarious slice of quintessentially Singaporean humour. Meenah & Cheenah features a series of sketches poking fun at a spectrum of characters from both fiction and real life, imagining meetings between Malays and Chinese from across the ages, from the legendary Hang Li Po and her handmaiden, to giggling schoolgirls, to a dance-off between Meenah and Cheenah.

While both stars of Meenah and Cheenah are seasoned actresses, that doesn’t mean headlining this show by themselves is by any means easy. Says Siti: “Comedy isn’t just a bunch of texts you keep rehearsing, but a series of sketches that relies on performers being able to anticipate reactions and sticking to the plot. Timing is everything, and we need to hit the punchline just right for maximum precision to garner the most laughs.”

She adds: “The toughest part is that it’s really just the two of us onstage throughout each performance, and we always have to be on top form. It’s very frantic backstage, with insane costume changes, no breaks, and shift from one character to another very fast with no chance to warm up for the next scene.” 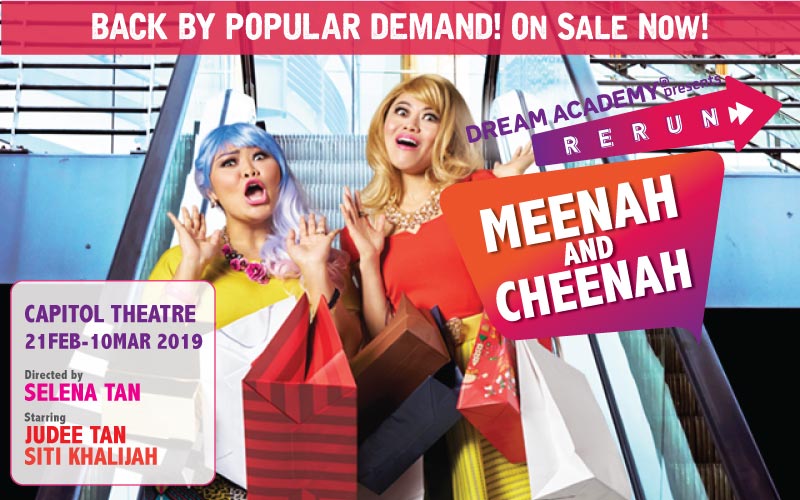 Co-star Judee chimes in, saying: “There’s a keen technicality to the genre, of comedy and our job is to both negotiate and navigate that. A lot of the funniest bits aren’t in a word, but in moments, some of which come one after the other very fast. How then do we translate this to the audience? It’s kind of like magic!”

Adds Judee: “In the previous run, I felt like audiences weren’t sure what to expect when they first came in. Meenah and Cheenah is interesting in that you don’t stick with one particular character throughout, unlike say Broadway Beng or my own character, Dr. Teo Chew Moi. Instead, Meenah and Cheenah represent the whole spectrum of Malays and Chinese, and each role is a little different.”

But beyond the comedy lies a far more pertinent issue at hand – that of making the sensitive topic of race accessible and bringing it into the open for discussion. Says Selena: Selena: “The recent GoJek incident was just so timely, and I always feel like whenever we choose to present shows, something will ‘zhun zhun’ happen to make our show incredibly relevant. I always feel like racial tensions have been around for a long time, and we went through this period of repression where we just never talked about it. Now it’s boiling over and rearing its ugly head in our midst, and we’re here to provide a form of therapy to tell people it’s ok to talk about it, to be open and ask when we’re curious.”

Says Judee: “It’s called Meenah and Cheenah, but we’re not 1 Meenah plus 1 Cheenah – we’re the representation of two races coming together to talk about differences in Singapore. I love talking about these so called ‘taboo’ topics, and really, this show is about getting curious and how we can facilitate cultural exchange.”

Adds Siti: “To succeed at this kind of show, everyone involved needs to be able to and want to talk about these ‘sensitive’ issues. Understanding starts with a discussion, and we need to be very open with each other about what we’re trying to say, as we try out punchlines and gauge if everyone is comfortable and how far we can push our humour.” 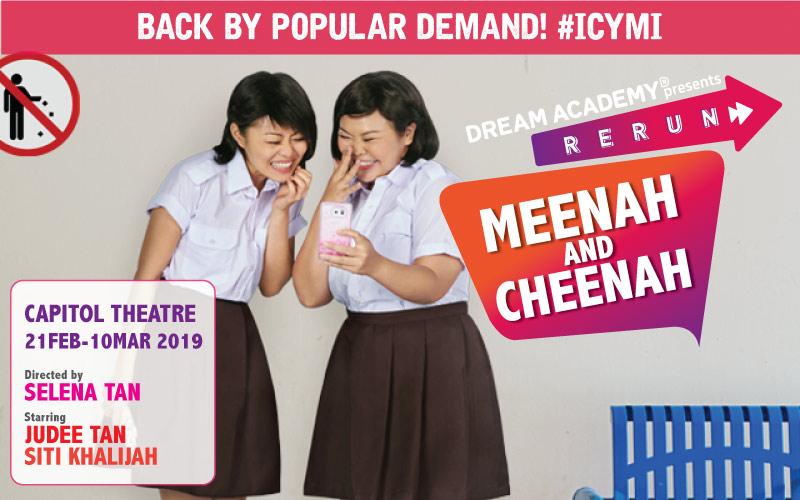 This time around, Meenah and Cheenah has even managed to get away with having no advisory or rating attached to the show, making it easier to convince schools and students to come watch the show as a group, potentially facilitating keen discussion amongst these young audience members about how race can be discussed both onstage and offstage. Says Judee: “The role of theatre and comedy I think, is to push as far as we can, and just put these issues out there and push at the boundaries to their very limits, and let people view it and laugh about it as they reflect. What’s more, being in the theatre with a live audience is so different from being at home watching TV, particularly with the reactions. Sometimes everyone’s laughing at the same time, and if you don’t laugh, then damn malu. And sometimes people laugh you go like ‘eh? how come?'”

Says Siti: “Meenah and Cheenah is all about celebrating our differences. And it’s ok to celebrate difference! Especially when it doesn’t come off as offensive, helped by how we have a very diverse team of writers – Malay, Chinese, Indian also have. Everyone’s opinions matter, and it’s so enjoyable going into rehearsals and revisiting what we did in 2016. This run is going to be an opportunity for us to tighten things up even more, and you can think of it as a better, upsized version from the last round, good for both people who have or haven’t watched it before.”

As the first show of Dream Academy’s 2019 Season, Meenah and Cheenah is setting a very promising tone for the rest of the year, and audiences can expect other familiar shows and characters to be making a comeback, with a ‘bicentennial edition’ of Broadway Beng and a new edition of Crazy Christmas in the works for the rest of the year. Says Selena: “Meenah and Cheenah provides the perfect platform for Dream Academy’s 2019 season. It’s so local and smacks of home. For me, it’s so easy to take things for granted, but it’s important to openly be able to talk about and discuss race, and I just wish we’d be more willing to talk about it more.”

Selena concludes: “The beautiful thing about these skits is that there’s just something about them that’s so timeless. Good humour works for now, but great humour lasts forever. I can imagine that whether this was presented 10 years ago, 10 years in the future, or of course now, these are moments and skits that just resonate with Singaporeans who’ve encountered these incidents in some form before, no matter who or when.”

Want to win yourself tickets to catch Siti Khalijah and Judee Tan hamming it up and nailing punchlines as Meenah and Cheenah? We’re giving away tickets to catch this riot of a show. All you have to do is tag 2 friends and comment on our Instagram post with the answer to:

“Tell us about an experience where you discovered something new about another person’s culture.”

0 comments on “Meenah and Cheenah Strike Again: An Interview with Stars Judee Tan and Siti Khalijah, and Director Selena Tan”