Emotional, poignant drama unfolds at the worst dinner ever.

Dinner parties can be absolute nightmares. But dinner parties aimed to make peace with the parents who bullied your son into suicide? Unthinkable. Such is the case for grieving parents Debora and Michael (Janice Koh and Edward Choy) in Late Company, who invite Tamara and Bill (Karen Tan and Adrian Pang), and their son Curtis (Xander Pang) for a meeting that hopefully, clears the air. But death is never an easy topic, and it’s not long before the initially amiable affair explodes into an all out confrontation as accusations are lodged, tears are shed and guacamole gets spread.

Written by Jordan Tannahill, it’s incredible to think about how the Canadian playwright penned this script at the age of 23. Late Company is a play that grips in every scene with the sheer tension produced from the awkward situation alone, and still manages to exceed all expectations by going far beyond simply being an aggrieved mother baying for blood and punishment. It is a play that adroitly brings up the pitfalls of parenthood and narrowed perspectives brought on by grief, deliciously chilling and hard-hitting drama that is both fresh and wise beyond years, its central issues of Internet bullying, LGBTQ youth and mental health almost timeless in their relevance. Each line feels carefully calculated to bring out maximum impact, a single sentence able to abruptly fill the entire room with uneasy silence, or an awkward riposte after, encouraging nervous laughter from the audience to momentarily break the visceral tension hanging in the air. 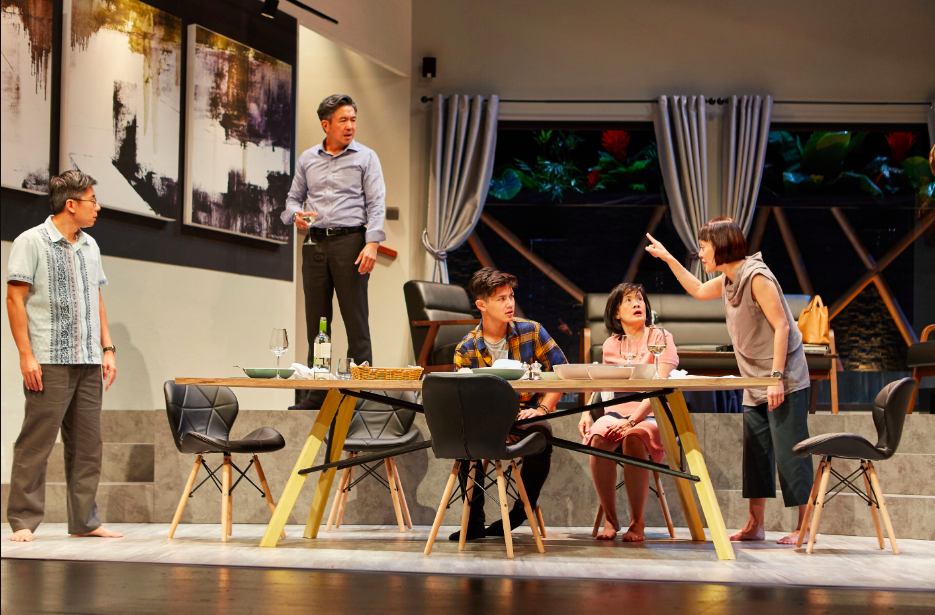 Pangdemonium has a strong track record of producing quality domestic dramas, and Late Company ranks among their best. Kudos to director Tracie Pang for pacing Late Company to perfection; it’s easy to get swept up in the multiple points of view thrown from character to character, all eighty minutes of this production flying right by, yet still remarkably easy to follow the trains of thought as we watch each one deliver one valid point after another, begrudgingly accepting that even the most distasteful of characters can at times be right. Under Tracie’s direction, there are emotional moments that catch one completely by surprise, such as Debora describing an innocent photo of her deceased son, or the impact of the minor tragedy of how in another life, under different circumstances, characters like Debora and Tamara might in fact have been close friends, rather then the rapid breakdown that happens before our very eyes, crushing all hope of reconciliation.

The localization of Late Company has also been effectively carried out making its themes and narrative feel immediately relatable and urgent to the Singaporean audience. Every reference and utterance is relatably Singaporean, from references to Michael’s role as a prominent MP (and the lack of choice in voting his party in), to discussion of the (upper-middle class) school environment the sons grow up in, with mention of quintessentially local Odyssey of the Mind to awards from the David Suzuki Foundation. One cannot help but recall one’s own schooldays, be it as bully or bullied, and reflect on our own seemingly innocent actions and words that may have cut far deeper than we ever could have imagined on schoolmates’ psyche. 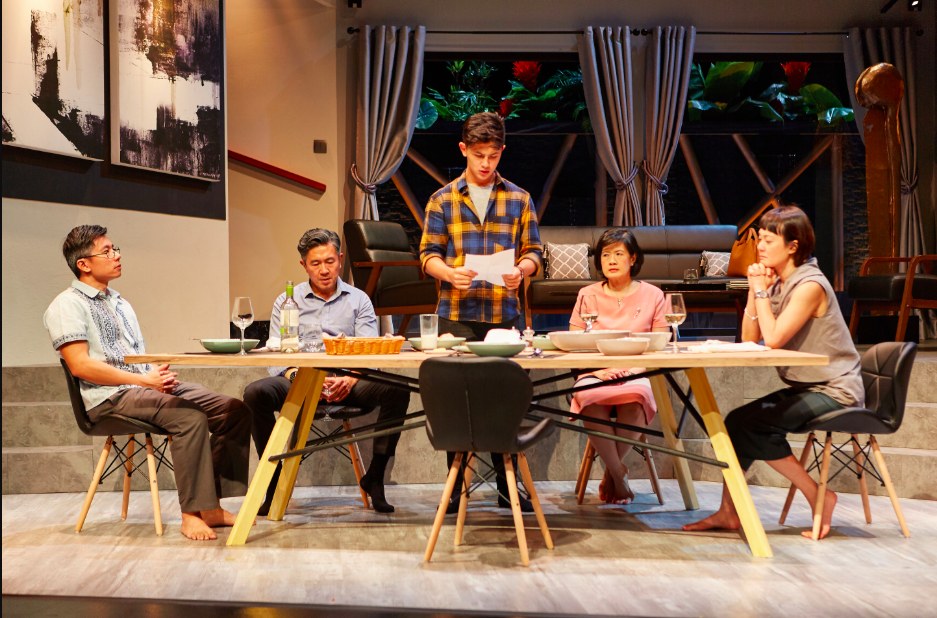 Set in Debora and Michael’s home, Petrina Dawn Tan’s gorgeous, intricate set easily resembles a typical landed property located in the likes of Katong or Bukit Timah. The level of detail she has imbued into her set is amazing, fully utilizing the depth of the Victoria Theatre stage that makes it seem far bigger than it actually is, including a water feature one, or the glare of headlights as a car pulls in evident on the window blinds. Yet, underneath the glamorous veneer of golden sculptures and bespoke furniture, how perfectly placed and organised everything is, the messy, dark undercurrent of grief running through the entire house feels even more poignant in contrast, and the eventual, hellish dinner party made more distressing still taking place in a house that otherwise suggests class and elegance.

Above all, it is the efforts of the talented cast, each cast as a character in their element, that makes Late Company as arresting as it is. It is a delight to watch Adrian Pang play the ‘bad guy’, with a ‘boys will be boys’ mentality as he exudes toxic masculinity, while Karen Tan’s unwittingly tone-deaf attempts to play peacemaker as she trivializes the death feels like an uncomfortably familiar relative at awkward family gatherings. Xander Pang, as their sullen teenage son Curtis, looks just the part as he grunts and speaks as if uninterested, angst emanating from him even when he is silent, while Edward Choy feels appropriately distanced and aloof as a politician father. 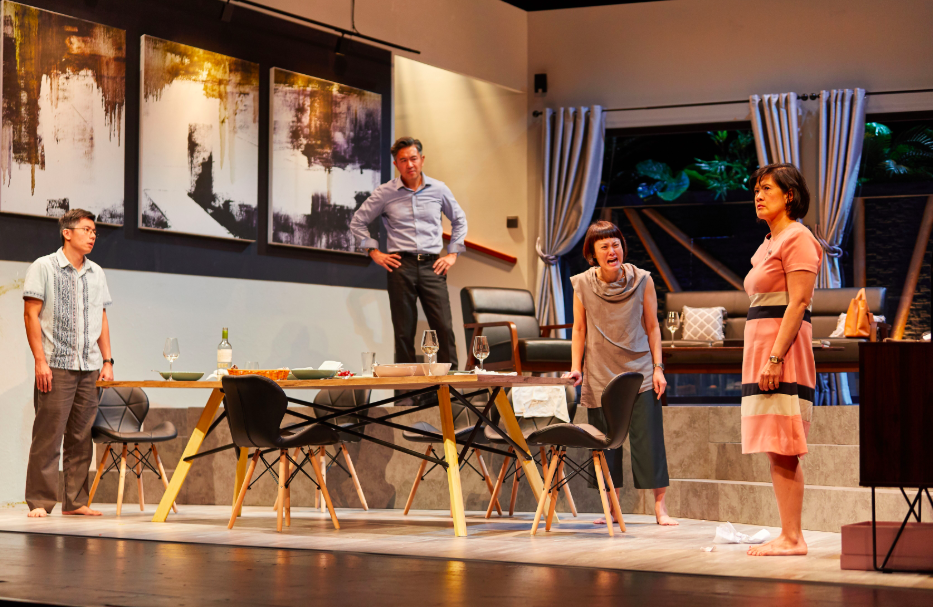 But of the cast, it is Janice Koh who steals the show with her masterful performance. As Debora, her character swivels from nervous, emotional wreck to combative, accusatory executioner, having laid what feels like a deathtrap for Bill, Tamara and Curtis. Her anger, depression and pain come bundled like a tightened fist, ready to strike out the moment she can, her agitation subtle but evident from the very beginnings of the play before becoming full blown attacks by the time dinner is underway. Both manipulative and vulnerable, Janice delivers a devastating performance that has earned a spot in our hearts as one of her best yet.

Poignant, gripping and fiercely relevant, Late Company is a powerful, moving production that will leave you devastated, and is essential viewing on the perils of and destruction bullying wreaks, be they parent or child. Although just Pangdemonium’s first production of the year, it’s already a strong contender for one of the best of 2019, spelling good tidings for the remainder of their season ahead. This is important, socially impactful work that delivers on all fronts, from production value to performance to a smorgasbord of lessons and thoughts audiences will take away, and marks a welcome return to form for Singapore’s favourite ‘ass-kicking theatre’ company.