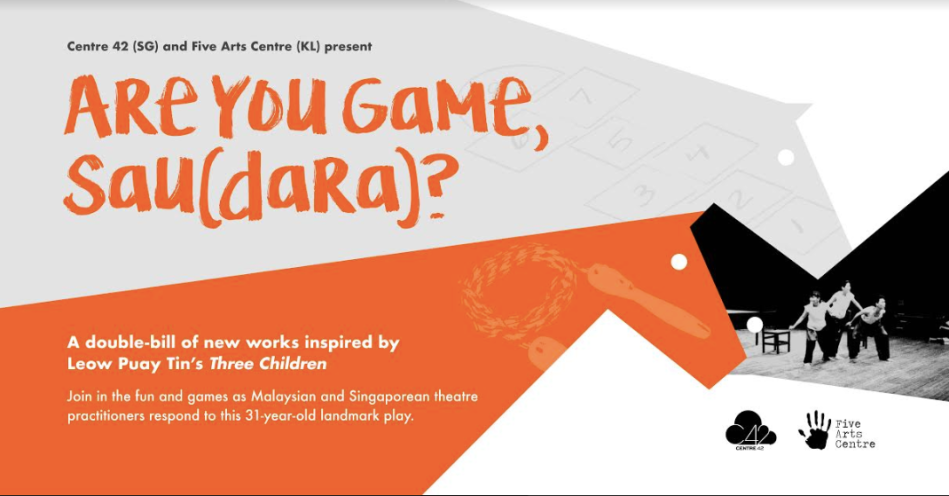 Are You Game, Sau(dara)? comprises two works created as a contemporary response to Malaysian playwright Leow Puay Tin’s boundary-pushing 1988 play Three Children. The first piece, Are You Game?, was created by Malaysian director Fasyali Fadzly, is a devised piece that revolves around the idea of memories and identity seen through a contemporary Malaysian lens. This work-in-progress response to the original play Three Children is semi-interactive, and seeks to playfully engage with audiences.

The second piece, titled Sau(dara), was devised by Singapore-based theatre company Bhumi Collective, and was previously performed while still a work-in-progress in 2018 under Centre 42’s The Vault programme. Sau(dara) explores childhood, memory, and play, primarily surrounding issues of trauma and friendship. Its premise is based on the artistic team’s own childhood experiences, while also incorporating scenes from the original script of Three Children.

Says Centre 42 Company Manager Ma Yanling: “We’re excited to embark on a new collaboration with Five Arts Centre. Through this co-presentation, we hope to explore new connections and approaches between independent artists, as well as between independent art centres. This deepening of relationship with Five Arts Centre, Bhumi Collective and Fasyali Fadzly is especially meaningful as Centre 42 has worked with each party on different occasions over the last two years.”

Echoes June Tan, Five Arts Centre producer: “It’s exciting for us to see how a new way of archiving/recording is considered with responses by contemporary practitioners on text/performance strategies previously employed by the past production(s) of Leow Puay Tin’s Three Children. Puay Tin and her work have had close relationships with Five Arts’ members such as Krishen Jit to Chin San Sooi, Chee Sek Thim and others. We are curious and encouraged to see how we can expand this thread to include Fasyali, Amin, Centre 42 and the host of contemporary practitioners working on this double-bill, both on the Malaysian and Singaporean side.”

Are You Game, Sau(dara)? plays in Singapore from 8th to 10th March 2019 at the Centre 42 Black Box. Tickets available from Peatix

0 comments on “Preview: Are You Game, Sau(dara)? by Centre 42 and Five Arts Centre”