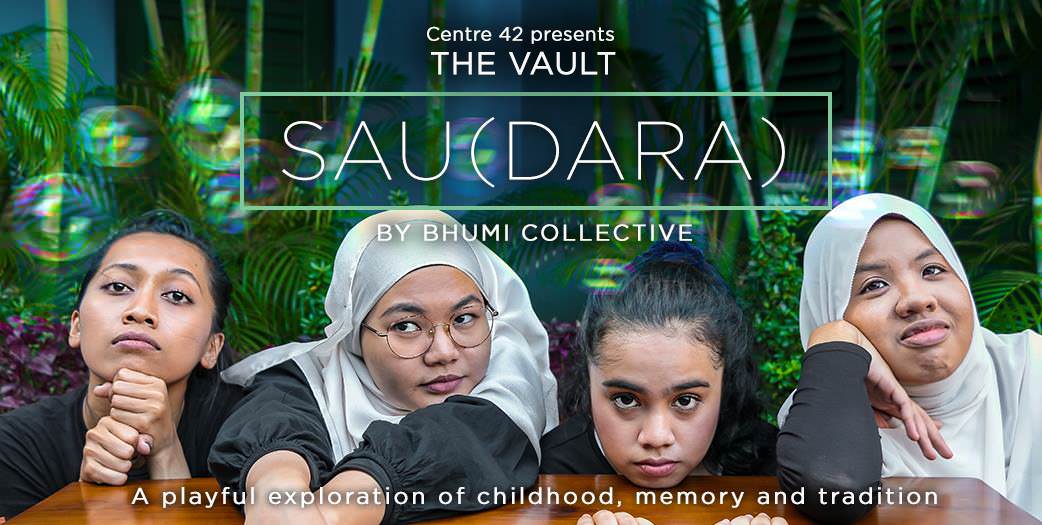 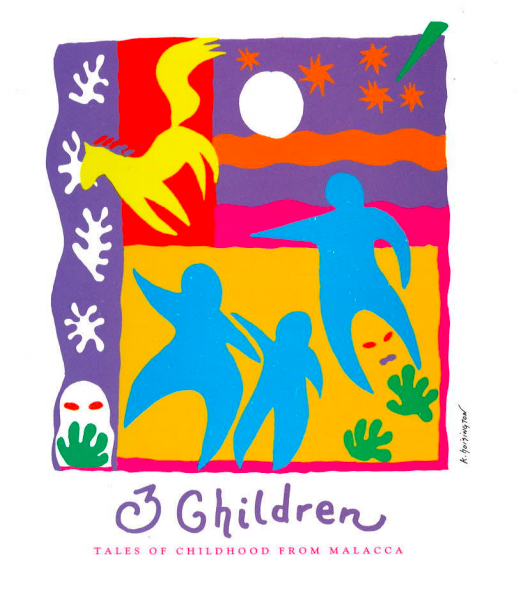 Considered lightyears ahead of its time, 3 Children follows two sisters and a brother returning to their home as adults on Kappan Road, Malacca in a dream journey of children’s songs and games as they are forced to confront their pasts. For three months, the directors trained and devised the play further with their actors, incorporating elements such as traditional art forms and eschewing a linear narrative, before eventually opening on 11th November 1988 at the Drama Centre to critical acclaim.

Now, 30 years later, local arts company Bhumi Collective has revived the piece in a new form. Part of Centre 42’s The Vault programme, which examines plays of the Singapore canon in a new light, the company has crafted a performative response to the original play, casting four young Malay actresses (Lyn Hanis Rezuan, Suryana Norddin, Syafiqah Shaharuddin and Syafiqah ‘Adha Sallehin) in Sau(dara). While the full title translates directly to ‘siblings’ in Malay, when broken up, it carries the additional meaning of ‘virgin’ (dara) and sau, meant to represent the sound of wind, a concept they wished to evoke in the performance. 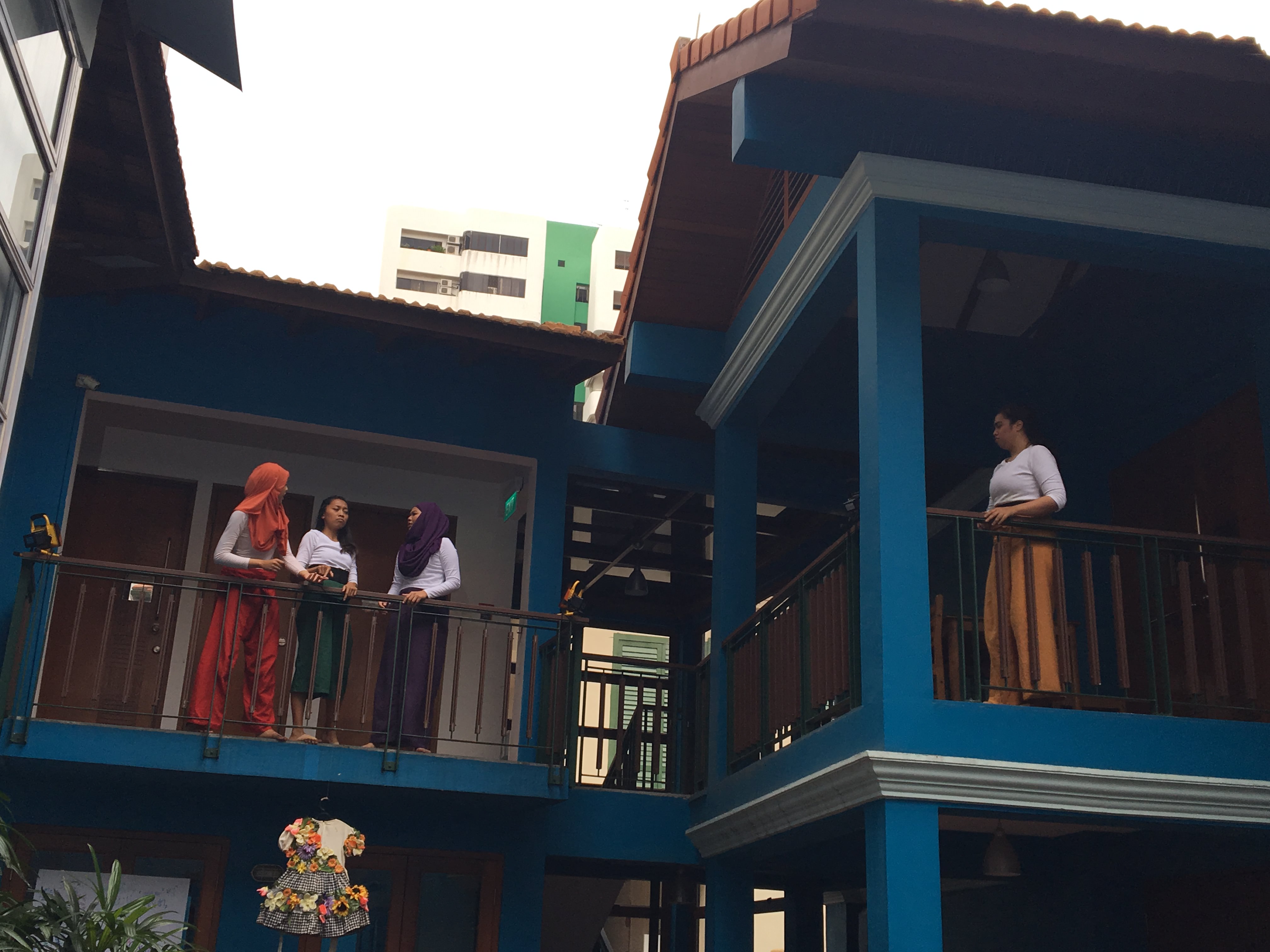 Directed by Soultari Amin Farid, much like the original play, Sau(dara) remains fiercely experimental in its form, taking a leaf from the original’s book as the performance begins with the four actors play various children’s games, from hide and seek to hopscotch, with the ‘narrative’ finally beginning proper when the four characters ‘ride’ into the jungle on an imaginary animal. 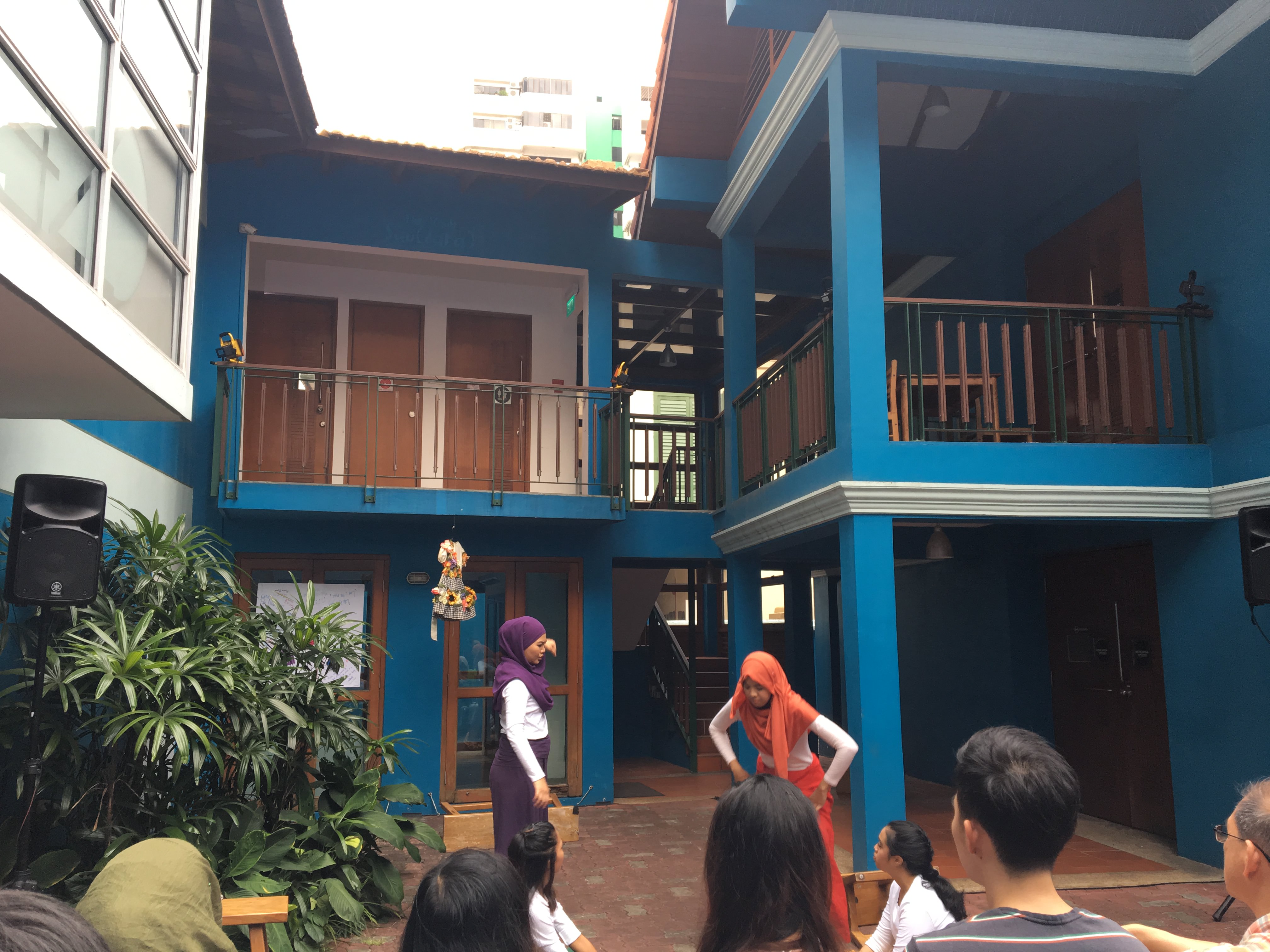 Using child-like language that betrays the actresses’ years and a youthful energy that has them springing up and down stairs, this innocence is betrayed by a darkness that pulsates at the corners of the play, with each character haunted by their own memories of the past. The brief sketches we see in Sau(dara) were harvested not only from the original play, but also from each actress’ own individual experiences growing up. From the sense of abandonment to fears of not being a good friend, the mood Sau(dara) evokes is that of a psychedelic wasteland devoid of adulthood, a place where the trauma of childhood thrives and is a cause for arrested development, hellishly replayed over and over again. 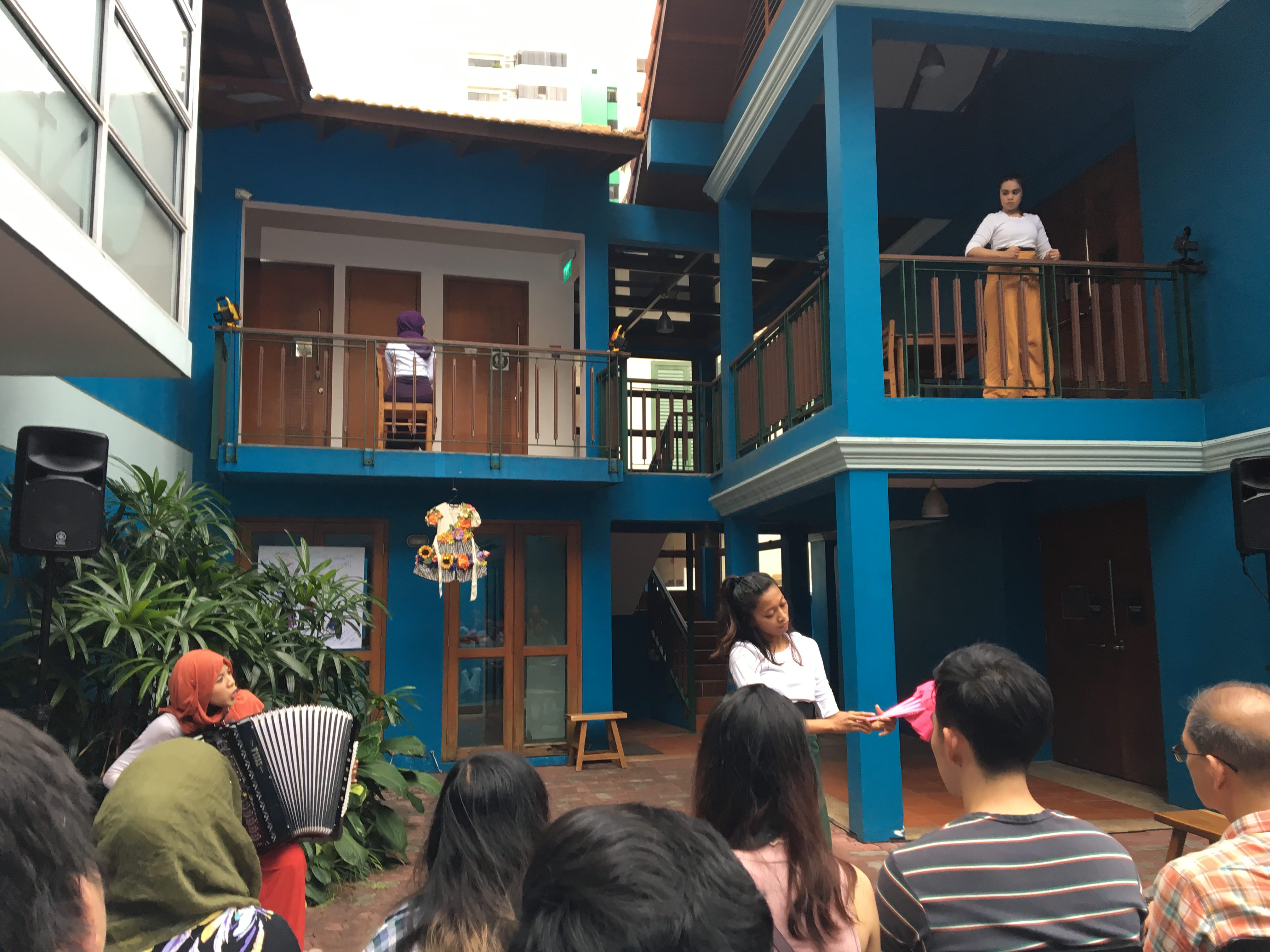 Similar to the original, Sau(dara) also boldly weaves in non-traditional theatrical elements into the performance, with its cast very much tapping on their own individual strengths to bring new dimensions to each scene. Indonesian dance form Pakarena for example, is strongly infused into the performance in its second half, evoking the image of wind and bringing to mind the flow of time itself, where the past whips suddenly into one’s presence before being blown away just as suddenly, much like the nature of memories. Meanwhile, performer and musician Syafiqhah adds a sonic element to the piece with her own ‘wind’ instrument – the accordion, as she delivers music that shifts from nostalgic to the devastatingly eerie and discordant the more she recalls her fears of invisibility to those she cares about, while even Chinese dance movements are incorporated later on. 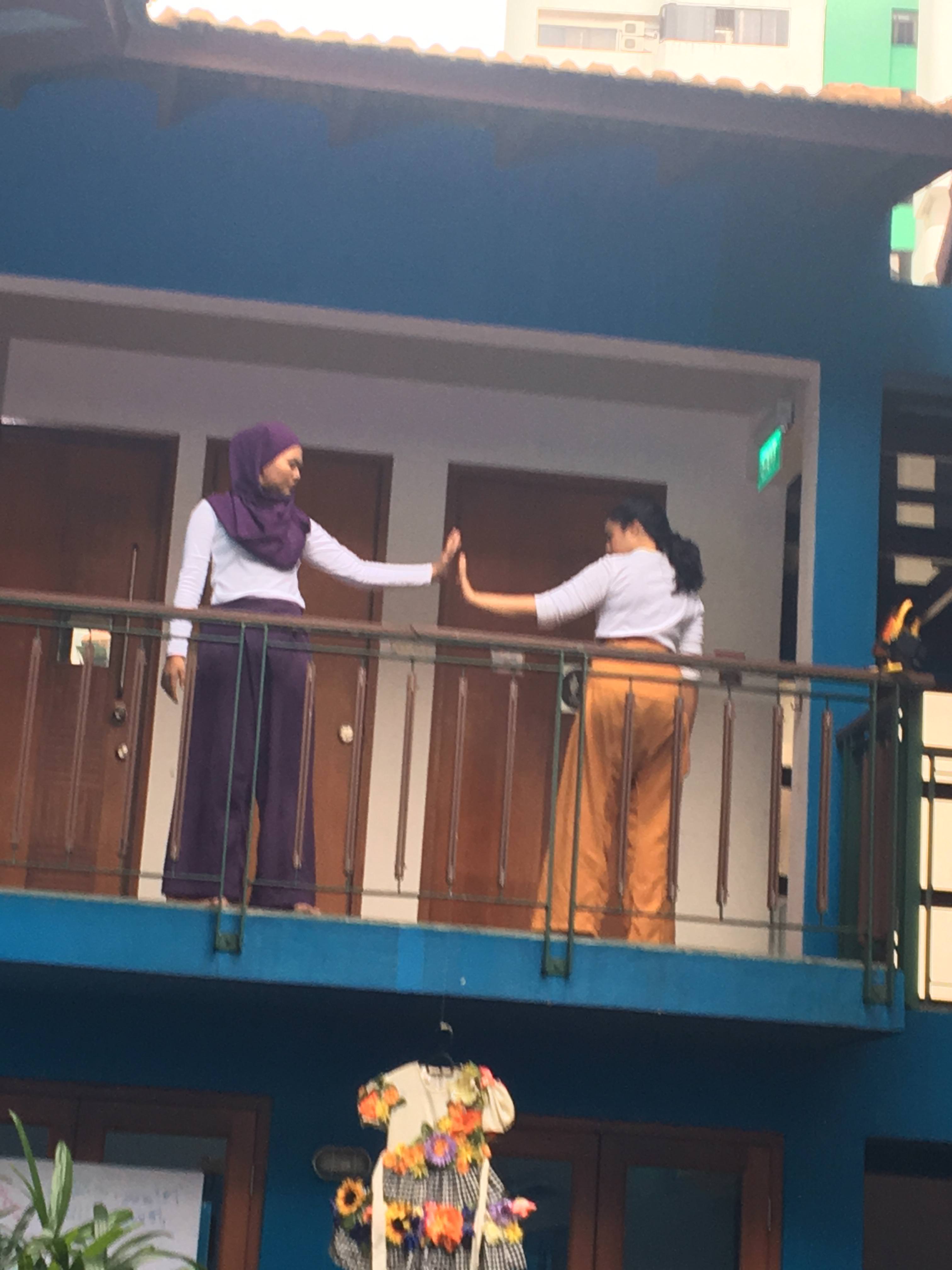 Sau(dara) also takes place not in the Centre 42 Black Box as originally planned, but in the Courtyard behind, certainly a rare and pioneer effort. A floral printed child’s dress hanging from the ceiling of the first floor, while the performers utilise the entire space, running up and down the perimeter of the Courtyard and stairs, bringing their performance across floors as it expands our field of vision and plays with our line of sight. As an outdoor environment, the occasional residual noise from outside affects the performance too, and a surprisingly appropriate church bell rings at just the right time to layer the performance with further ominous dread. 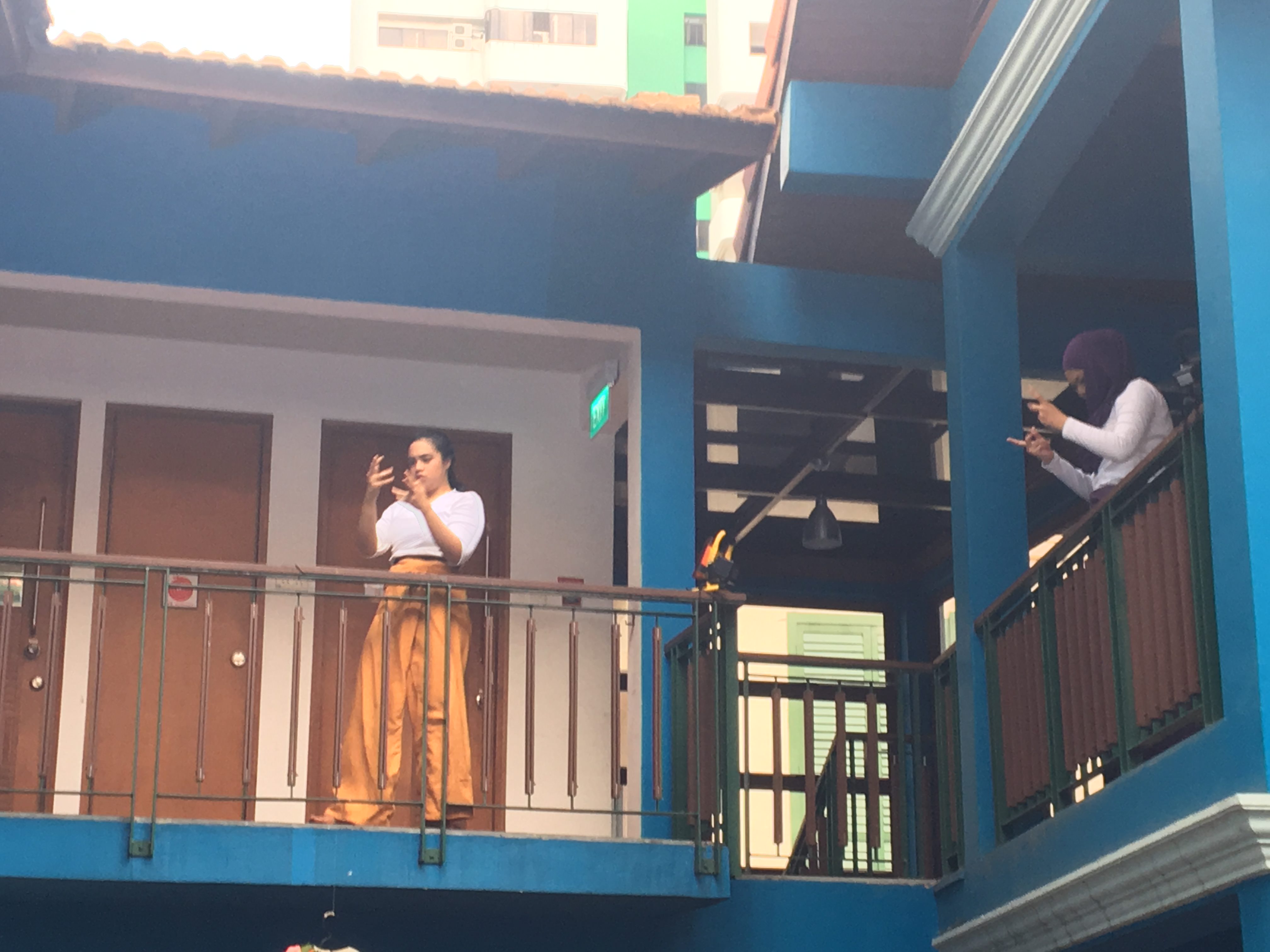 Sau(dara) ebbs and flows like a reflection of childhood and how it shapes the way we grow into adults, utilising the medium of childhood games to further emphasise the omnipresence darkness lurking even in the most innocent of memories, leaving one surprised, moved and devastated when we realise just how little of our own psyche we really know until we dig deep. But just as time heals all wounds, the performers end Sau(dara) not crushed, but renewed through its choice to confront personal traumas head-on, a trial by fire that leaves them better people than before.

Sau(dara) played at Centre 42’s Courtyard from 6th – 7th October 2018. In March 2019, Bhumi Collective will be heading to Five Arts Centre in Kuala Lumpur to perform Sau(Dara), while Five Arts Centre will bring their own response to Singapore in the same month. Visit Centre 42’s website for more information

0 comments on “Centre 42’s The Vault: Sau(dara) by Bhumi Collective”