A bleak portrait of the problems haunting Malay youth.

The teenage years can be hard, but when you belong to a certain group or class bogged down by stereotypes, it can be even harder.

For the six Malay youths in Noor Effendy Ibrahim’s Anak Melayu, teenagehood is practically a nightmare, as each one deals with a different facet of discrimination, all messed up even before adulthood begins. First written in 1992, this new version, directed by Adib Kosnan, still feels as relevant today as it did before, with the stereotypes presented here still rampant throughout society.

Anak Melayu opens with an introduction to each of our characters, one at a time: Kak Liza (Airah Yahya), a drug addicted chainsmoker, Joe (Fadhil Daud), a macho-acting boy embodying toxic masculinity, Fuad (Hafiz Hanafi), the good boy constantly bullied by Joe, Hayati (Tysha Khan) as a girl desperately seeking attention and hopelessly crushing on Joe, Shalawati (Masturah Oli), a sexually charged flirt, and Khaizal (Mish’aal Syed Nasar), a slower, mentally-challenged youth. The six teens are gathered in a nondescript area, lepak-ing on a brown butcher paper-covered set, along with three street lamps. Possibly a barbecue pit, possibly a void deck, this space is primarily a place where these youths might gather at. 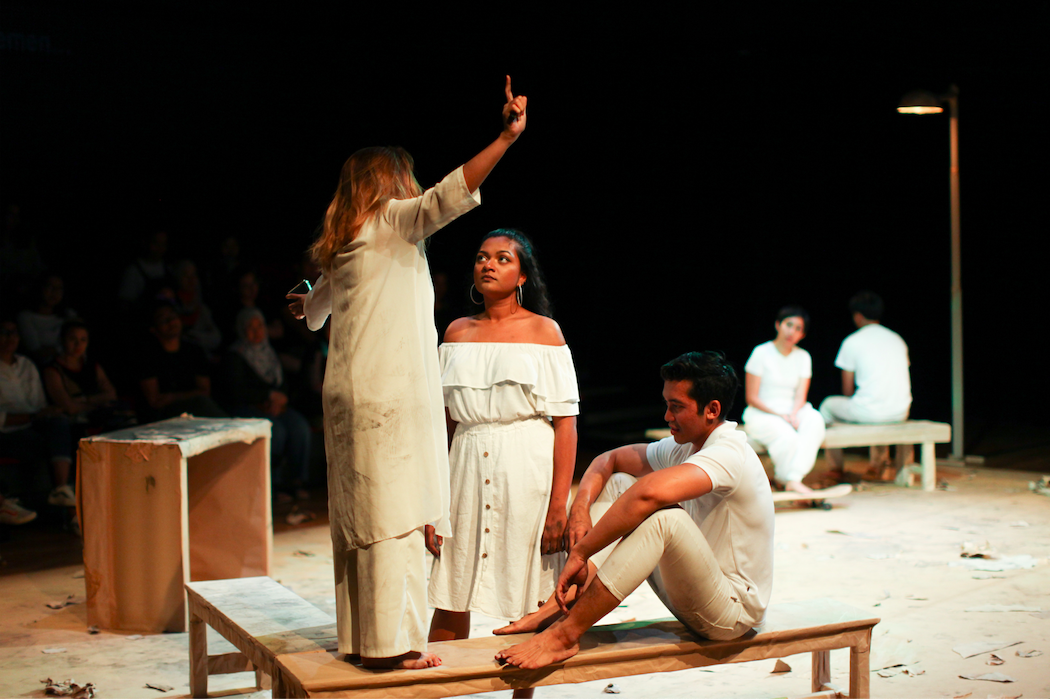 Clocking in at just one hour, it’s impressive how even in his youth, Noor Effendy’s writing feels visionary, with a succinct script comprising the most necessary of lines, amazing for the amount of depth and breadth it covers in its short runtime. Character establishment relies heavily on actors’ performances, with a heavy emphasis on tone, expression and physicality. Bereft mostly of a plot, we watch as these youths interact and develop their tangled relationships with each other, a rollercoaster of confusing emotions that leaves them more lost than when they first began. 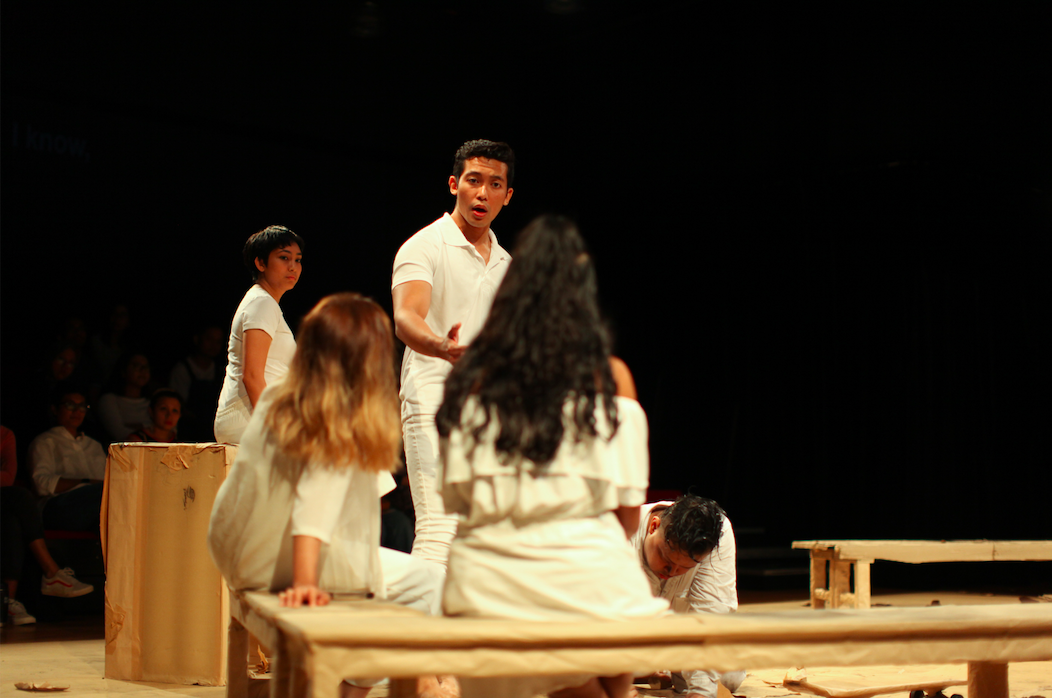 The problems each of them face are evident from the outset, as scenarios depicting each of their descents play out before us – Joe is key to most of the tension present in the play, recounting getting into a fight with someone else in a display of chauvinism, while dealing with his own shame of his Malay-ness (he rejects his full, obviously Malay name). Fuad, the good boy, is constantly at the mercy of Joe, forced to drink from a paper-bagged bottle of alcohol after being subject to a violent neckgrab, before Khaizal grabs the bottle from him to take a swig, incurring Joe’s insults. 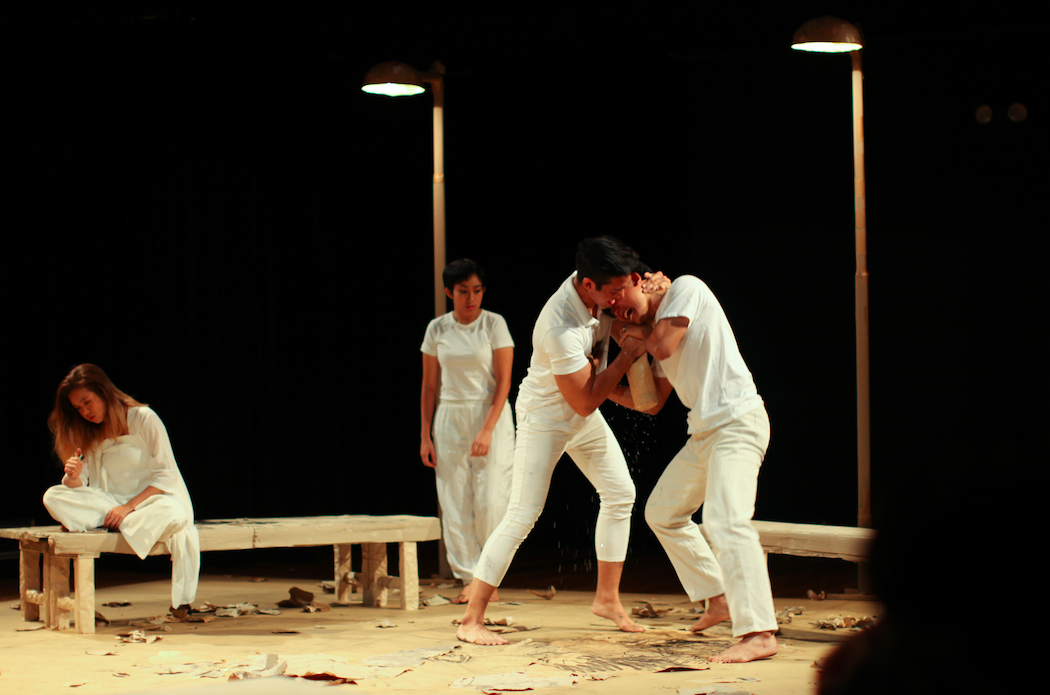 Meanwhile, Shalawati attempts to get sexual with Joe, sidling up to him and attempting to cosy right up, much to the dismay of Hayati. Khaizal attempts to snap the drug-addled Kak Liza out of her stupor, to no avail, hopelessly addicted and swaying as she moves across the stage, vehemently voicing her refusal to ever give up smoking, and that it’s her life anyway – why should it matter to anyone what happens to her?

All throughout, Khaizal doodles on the paper around the set with black charcoal, seemingly lost in his own world, the only thing he can possibly do to keep him sane amidst the madness and violence he is surrounded by (Mish’aal does an especially good job amidst the cast of truly embodying his character’s quirks and physical traits and idiosyncrasies). Yelled at by Joe for making ‘stupid art’, Joe pours his drink over the drawings, spreading the black charcoal all over. With the cast completely dressed in white, by the time the play is over, their garments have all been stained, as if it is teenagehood itself that has tainted the purity of their youth, growing up in society that has somehow enforced their behaviour, leading them with narrow paths and little hope for the future. 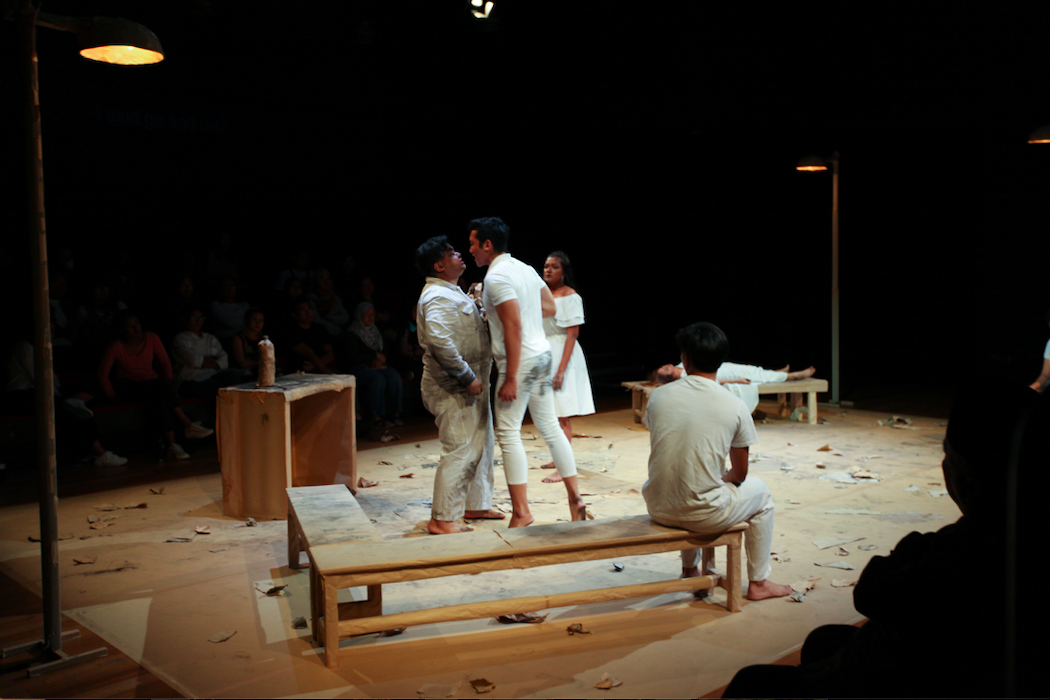 In Anak Melayu, actions speak louder than words, and it’s kudos to director Adib Kosnan for having led his cast into bringing out the subtle nuances of the deceptively simple script and layers to their characters through their performance alone. This bleak snapshot of life of Malay youth is pitch black, and is particularly disturbing considering it deals with issues of impressionable youth, stark in its subject matter and made more terrifying by realizing that all this is still very real. Through Anak Melayu, one is reminded of the doomed youth of today we forget amidst celebrating the successes of others, and wonders if there is any way at all we can somehow reach out to them, and save them from themselves and the hellish society they’ve entered into.

Anak Melayu plays from 27th February to 2nd March 2019 at the Malay Heritage Centre. Tickets are sold out.