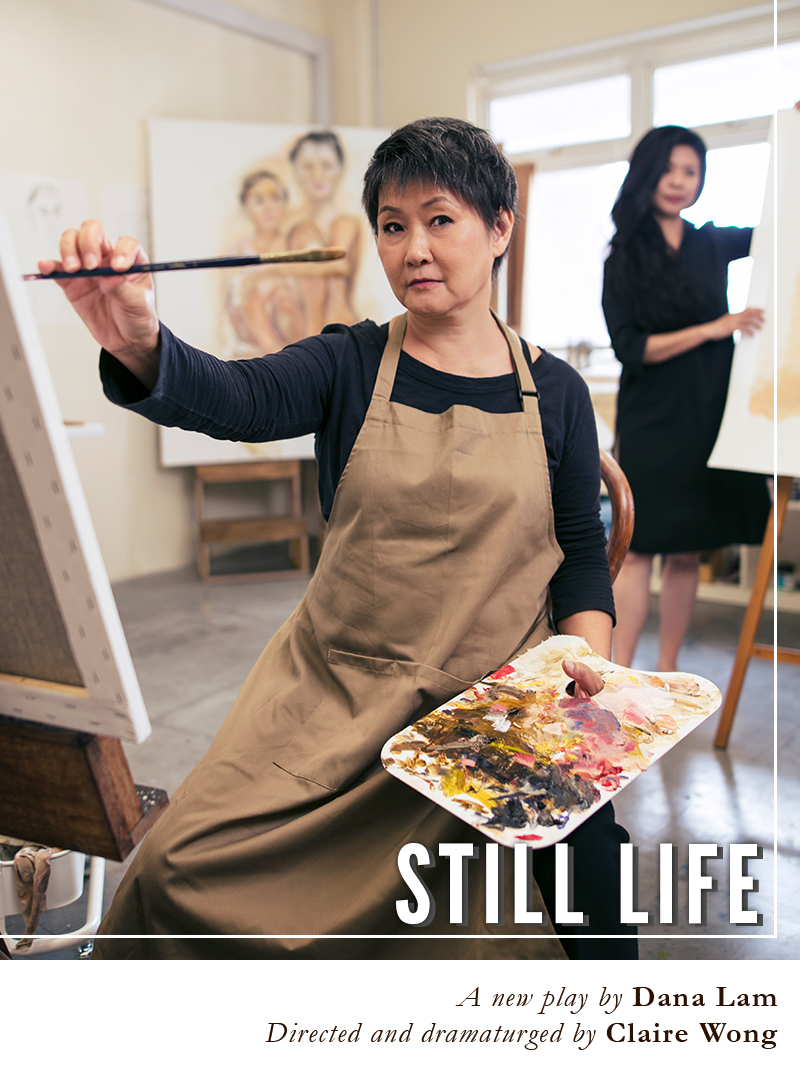 An activist uses art as a means of  finding new ways of seeing and recalling her mother.

Former AWARE president Dana Lam is known more for being an activist than an artist. But take a peek at her biography in the programme booklet, and you’ll notice that she’s performed in more shows that you’d expect. In addition, Dana is also a trained painter, and it is this hobby she returns to for a year, painting furiously each day to make up for lost time, while managing to also use this act as a means of accessing her memories and understanding herself, and her troubled relationship with her late mother, the main subject of her new play Still Life.

Directed by Claire Wong, the moment one steps into the space at 72-13, one already feels a deep sense of the personal that characterizes the entire venue. All around us, the paintings and art Dana has crafted over the past year year are arranged, with various nudes hung up on the walls, and a gigantic pile of twigs hanging just above us, like the nest of some kind of massive bird. Essentially a reflection of Dana’s own psyche, the space feels surprisingly intimate under Petrina Dawn Tan’s set design, with the ceiling lowered, and a combination of regular folding chairs, cushioned seats, bar stools and even rattan chairs surrounding the performance space for seating, making the entire set-up feel like an actual studio, cosy, welcoming and warm, settling audiences in to quite literally enter the world of Dana. 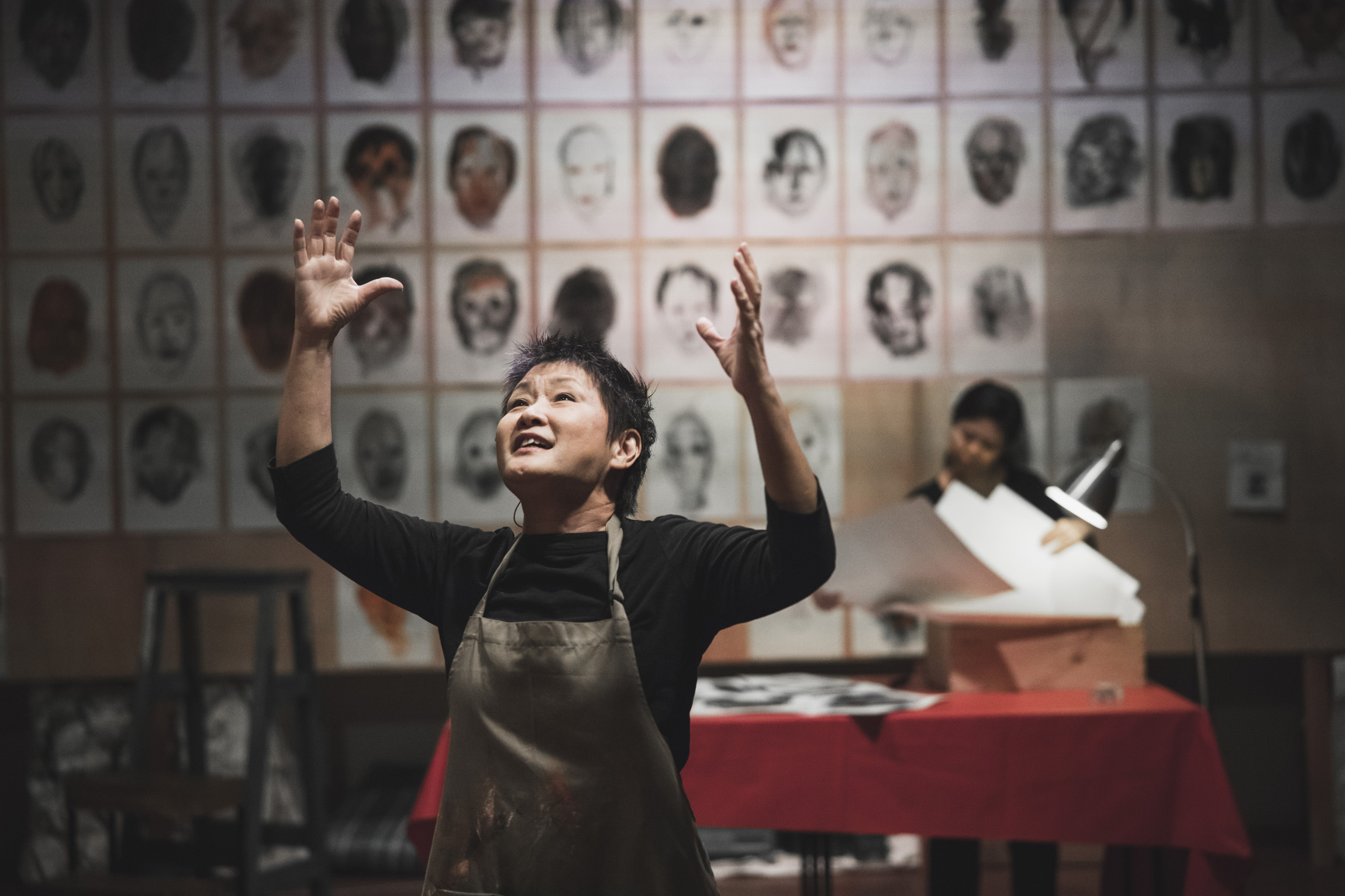 Still Life, like the nature of memory itself, is a fragmented piece, leaping back and forth between the past and the present to paint a fractured portrait of Dana’s life. While it begins with Dana recalling the difficulty of her own daughter’s refusal to pose for a still life for her, what Still Life then evolves into is Dana recalling her relationship with her own mother, often a tumultuous affair filled with regret, pain and confusion. Time flows in strange ways in Still Life, starting with her mother’s last days and death, speaking of them in front of a wall of abstract portraits, some benign, some eyeless and resembling Edvard Munch’s The Scream, many of which are interpretations of her mother, showcasing her often complicated feelings towards her. We listen to her recall awkwardly explaining to her teacher why her last name is different from her father’s, to slamming a door in her mother’s face upon seeing her caring for her children, to another childhood memory of sitting in a car in Malaysia with her family, momentarily, possibly happy.

Under Claire’s direction, the familiar story behind Still Life manages to come through, helped in part by the way Dana’s own art enhances her words, with certain visual cues help us to focus on the action onstage. In one scene, the paper mache moulds of a pregnant belly are layered (by co-performer Jean Ng) on to Dana as she recalls giving birth to her daughter, later, re-using them as candle-holders lain out on a table. In another, as she remembers her mother having her photo taken, the lights are suddenly dimmed, recreating the effect of a photo studio. While at times bogged down by its poetic language, losing us in her own nostalgia, there are powerful moments where something quintessentially relatable comes through – we cannot help but laugh out loud when Dana explains her procrastination methods as she turns to “transcendentally” cleaning the house from top to toe, stemming from the power of truth in Dana’s words. 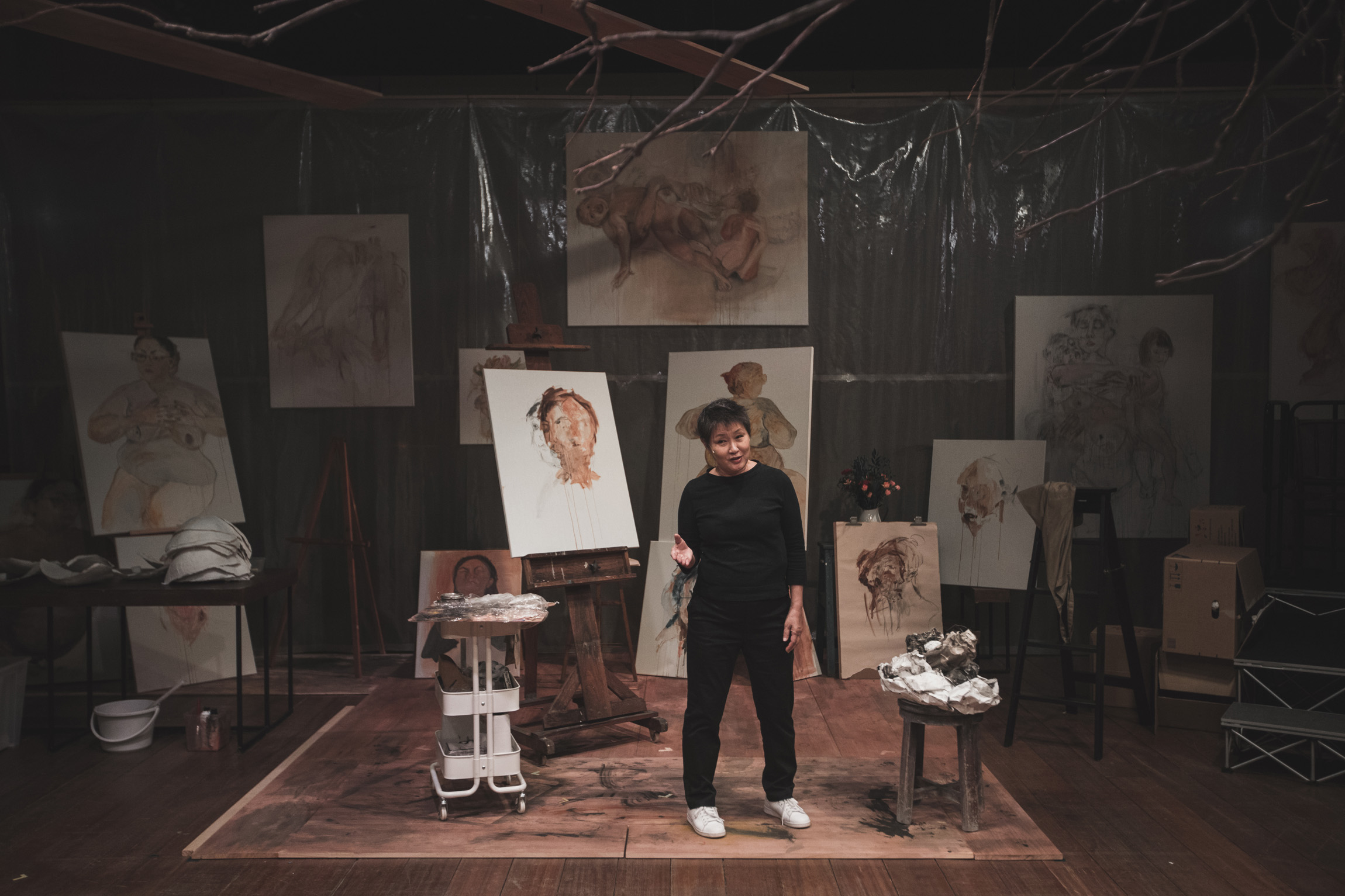 But beyond all that, nestled in Dana’s ‘studio’, listening to her recollection and surrounded by her collection of work, there is a strange closeness we feel to her speaking about a topic and medium so close to her, and we too begin to see the world through her eyes. Much like how Checkpoint Theatre wove hip-hop into theatre with Thick Beats for Good Girls in 2018, Still Life similarly does the same with visual art, to use a different artistic medium close to the subject’s heart to give audiences a pair of brand new eyes as we learn to see Dana’s worldview through her artistic lens. While certainly, Dana has had enough time and told this story enough times already to internalize it, Still Life remains a brave production that puts life itself into perspective, an installation given life with a true story, and the lesson that art itself is worth doing.