Review: First Storeys by Sean Cham (The Future of Our Pasts Festival)

An art installation on Singapore’s housing history with a theatrical twist.

Singapore’s housing history can feel like a dry topic. But artist Sean Cham has deemed it worthy enough to unearth and utilize as the main subject of a visual art installation piece at Yale-NUS’ The Future of Our Pasts Festival. While the final year Yale-NUS student is better known as a visual artist and photographer, his new work First Storeys tacks on an additional theatrical element, seeing him play director as well in this site-specific installation.

Taking over an abandoned compound at 300 Jalan Bukit Ho Swee, the former site of the Bukit Ho Swee Community Centre built on the site of the Bukit Ho Swee fire, the installation imagines audiences as Singaporeans undergoing resettlement by the fictitious Singapore Housing Improvement Trust (consider the acronym) in the 60s-70s, taking place in the Trust’s ‘office’ as we are lectured and introduced to the ‘future developments’ the government is working on, before individually meeting a resettlement officer to ask more probing questions. 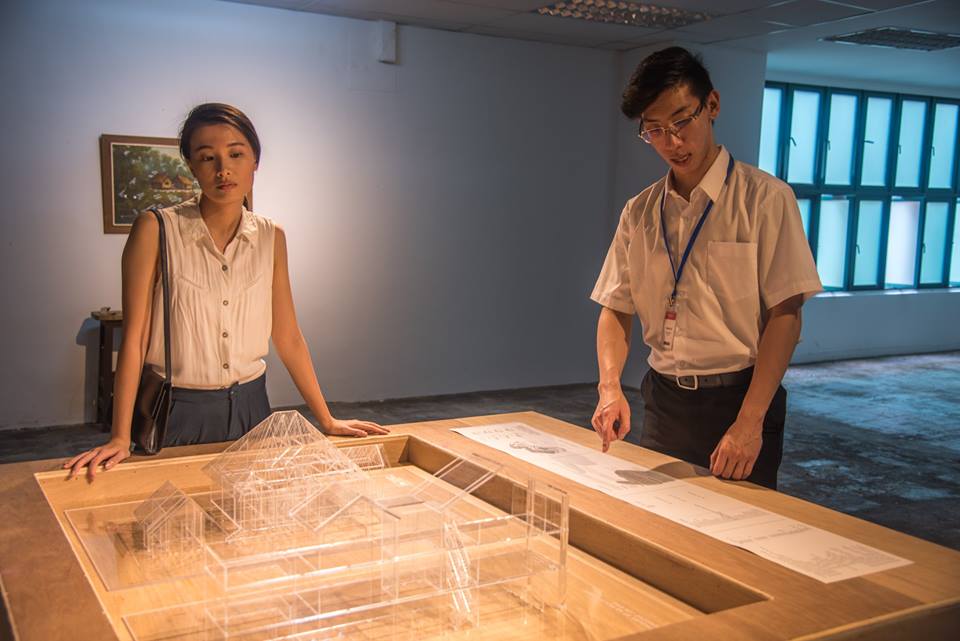 Grouped into various waves so as to stagger each tour, we found ourselves with Officer Pillay (Hemang Yadav) as he brought us around the compound, with various exhibits to introduce us to the new government initiatives. These exhibits include a neatly arranged deconstruction of flat paraphernalia (including bamboo poles to the tiles used) to whitewashed plastic fruit to represent the compensation one would receive upon resettlement, to a map of Singapore made of the surface of old dining tables to showcase development plans of the future. 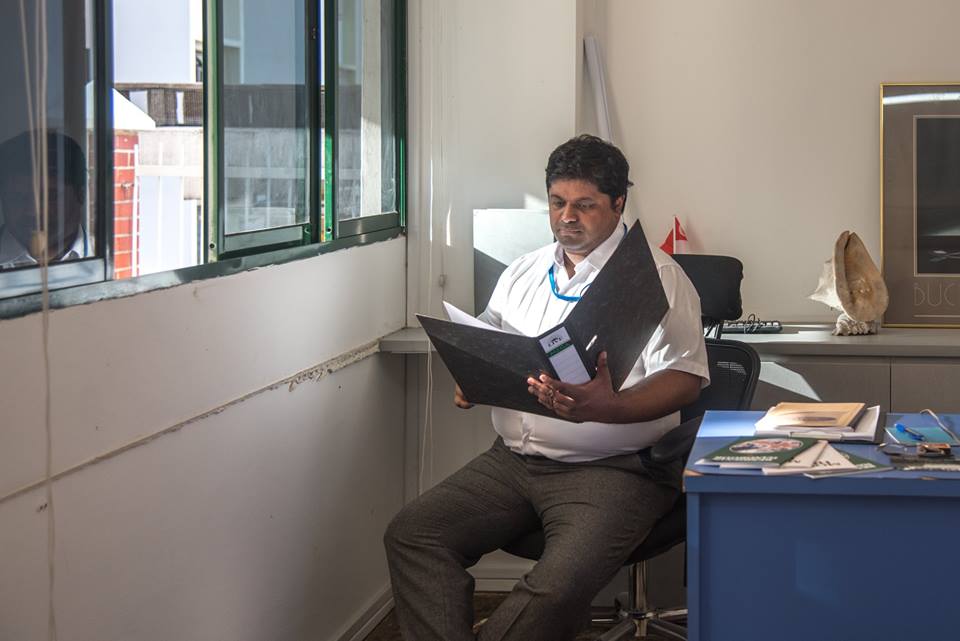 There have been plenty of efforts made at making the experience as ‘real’ as possible, from having to queue with our NRIC/Passport to register, to having our smartphones taken for safekeeping, to receiving a file containing booklets easing new residents into how to resettle into their new homes (designed by Sean himself, featuring old school white and blue illustrations with himself cheekily inserted as a ‘how to’ model). Officer Pillay’s explanations in particular felt exactly like what a long-serving civil servant would say, as he made sure to speak in step-by-step detail about the process us citizens would have gone through. However, the space in this former community centre feels oddly utilized, with rooms selected as the site of exhibits seemingly for the sake of spreading the exhibition across a bigger area within the compound, and in order to create an actual ‘walking’ route rather than keep it within a smaller area. Often, this results in a tour that drags somewhat due to the amount of movement required between rooms, and the audience members who lag behind within the relatively large group. 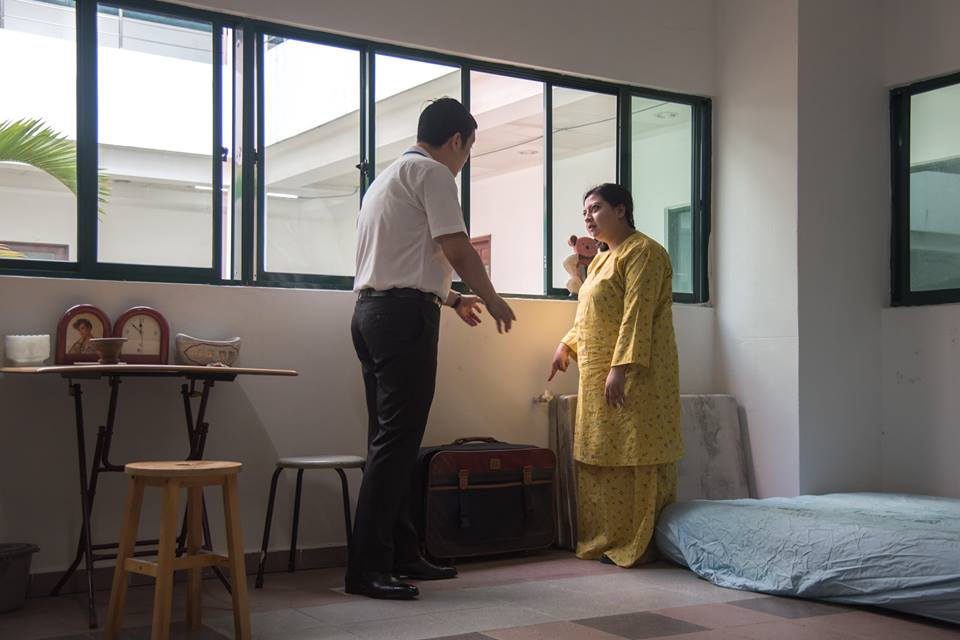 We are then shuttled to the resettlement office to meet with our individual officers, free and easy as we sit around in a room waiting for our number to be called. It is to our joy that the set-up of this room is dedicated to realism, with a boxy, small-screened television showcasing grainy old videos, genuine magazines from the 70s making for interesting reading material, and a children’s play area complete with a hobby horse. Being confined to the area however, while good for control, is met with growing ennui (perhaps to resemble the actual act of waiting), while not every audience member will be given a chance to meet their officer due to limited time. 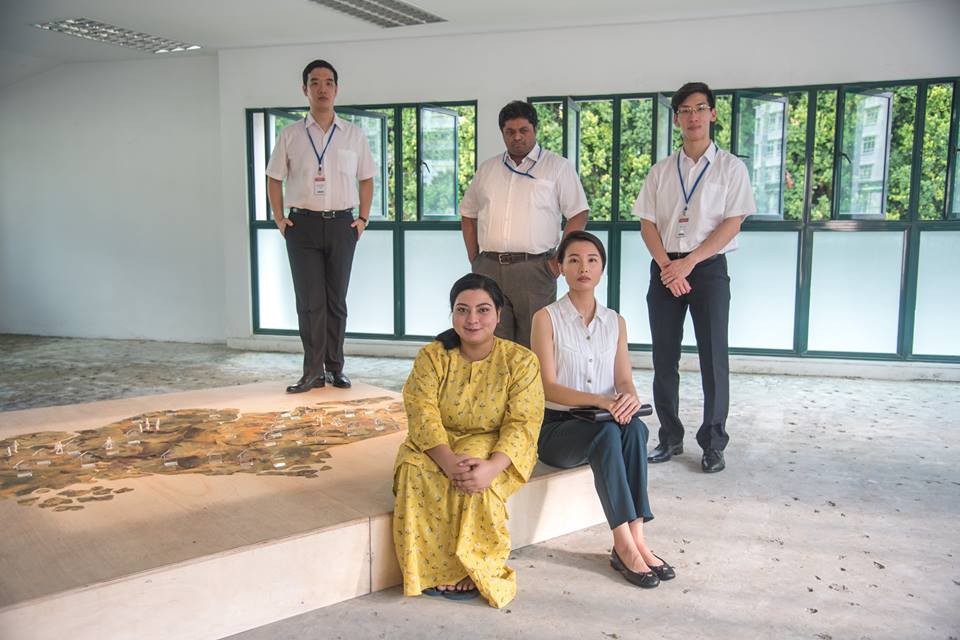 Furthermore, it is at this stage that the theatrical elements truly come into play, with performers Regina Tan and Hasyimah Hassan playing two fellow citizens waiting for their turn, their disgruntlement escalating into full-blown arguments with each other and the officers before long. While this is certainly a ‘realistic’ scenario, the source of their argument comes off as too weak a reason to keep most audience members interested in the nearly 45 minute ‘performance’, with some cheering them on for a little before most, if not all, return to their seats and simply watch languidly from afar due to a lack of engagement.

First Storeys is a worthy artistic attempt at interpreting the resettlement schemes of early Singapore, a work that is rife with potential on a subject few people have discussed at length, yet underdeveloped in its execution. What this theatrical installation ends up becoming is a recreation and re-presentation of the past, the site haunted by its own significance as these imaginary characters are brought to life for a beginner’s introduction to Singapore’s housing history, one that is informative, a little tongue-in-cheek, but mostly, undecided about how it wants us to see these initiatives given the benefit of hindsight.

First Storeys: A Theatrical Installation runs from 1st to 10th March 2019 at 300 Jalan Bukit Ho Swee, Former Bukit Ho Swee Community Centre, and will be performed in English, Malay, Mandarin, and Hokkien, with no surtitles, as part of Yale-NUS College’s The Future of Our Pasts Festival. Tickets are sold out.

For more information about The Future of Our Pasts Festival, visit their website here