A 10th anniversary is always cause for celebration, and for T.H.E Dance Company, the 10th edition of the annual M1 CONTACT Contemporary Dance Festival marks a significant milestone in the company’s history, as it returns this year from 15th June to 21st July.

Set to feature over 50 events, comprising shows, classes, workshops, talks and more, this special edition brings back artists featured in past editions, as well as an increased amount of support for local dancers and choreographers, as well as accessibility for audiences with disabilities. Says Festival Director and T.H.E Artistic Director Kuik Swee Boon: “I started the festival in 2010 because I wanted to dispel the myth that contemporary dance is always something very intelligent or cheem. For this edition in particular, I wanted to highlight a greater diversity of artistic voices in our society, and in particular support more local artists by giving them a platform to showcase their work and strengthen their profiles.” 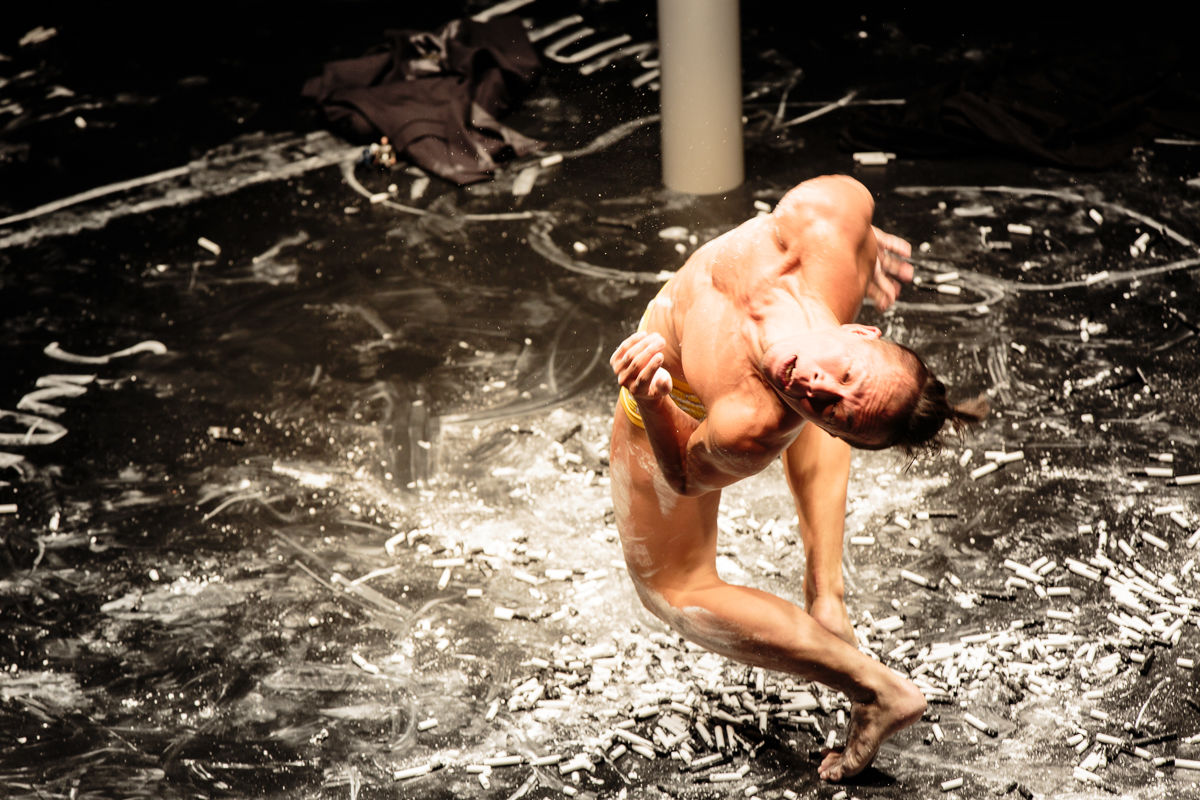 Highlights from the festival include this year’s edition of Binary – International Artists Showcasem featuring Danish artist Kitt Johnson as the performs Stigma, an enigmatic solo first featured in the Festival in 2013, as well as Sweden-based Japanese artist Shintaro Oue, last seen in the Festival in 2014, with the full length work 談ス (Dan-su) at the Esplanade Theatre Studio.

Also set for a restaging is 2013’s Mr. Sign, as choreographed by T.H.E Dance Company’s Korean resident choreographer Kim Jae Duk, who also composed the soundtrack comprising Indonesian gamelan, traditional Korean trot music and reworked pieces from Tchaikovsky’s Swan Lake. Performed by an all-new 6-member cast from T.H.E Dance Company, the performance marks the main company’s first ticketed public show in Singapore after a month-long performance tour in Europe this year. Says Swee Boon: “It’s been quite challenging because of the tight schedule we’ve been having for rehearsals. It’s a very fast-paced work that the dancers had to learn in two weeks due to Jae Duk’s limited time with us. We’re about 95% there at this point though, and at this stage, it’s all about them digesting the work and learning to insert their own movements and individuality into it rather than copying the choreography wholesale.”

For their open call for involvement in the M1 Open Stage programme, the Festival received 171 submissions from 39 countries between September to November 2018, requiring an advisory programming panel to whittle down the final selection to just 8 works to be presented. Over three different programmes, M1 Open Stage presents a series of contemporary dance performances, including 4 selections from partner festivals in Japan, Korea, Israel and Italy. The programme is particularly integral to the local dance community, as collaborating festival directors and programmers from these countries, as well as those from Australia, Hungary, Hong Kong, Macau and Spain, have been invited to the Festival to watch and select pieces from these three programmes.

Says Faith Tan, Head of Dance & Theatre, The Esplanade Co Ltd: Over 10 years, M1 CONTACT Contemporary Dance Festival has grown into a significant platform for developing dance in Singapore by enabling many emerging artists to present their work, initiating artistic collaborations and connecting international dance presenters to Singapore. Esplanade has been a collaborating partner since 2011, and we are excited to support their anniversary edition of the Festival.”

The Festival also aims to spur the next generation of emerging choreographers and showcase their work, this time with DiverCity, now a separate platform from M1 Open Stage, with 2 solos and a duet created and performed by rising Singaporean independent dance artists. These works, namely, are Amelia Chong’s NAMUH, first presented in Off Stages in 2018 and further developed and presented at Supercell: Festival of Contemporary Dance Brisbane, while the other two works will be a solo by former Frontier Danceland full-time artist Adele Goh, who will be collaborating with Germaine Cheng on a work that explores the body as space or architecture; and DBL.TAP, a duet exploring social media addiction by Rachel Lum and Edwin Wee, the latter having spent a decade as a performer and choreographer and 7 years as rehearsal director in Arts Fission.

Giving the young choreographers such a platform was integral to the development and showcase of their work, even linking them up with dance studios to provide them a rehearsal and development space, with a failsafe to the quality of the work being that they must complete a version of it a month before the production, after which more advanced choreographers will come in to continue helping them grow the work into its final form.

Also making a return is free outdoor performance Dance at Dusk, held at the Esplanade Outdoor Theatre and featuring excerpts from Kuik Swee Boon’s Silence, as performed by members of T.H.E Second Company. First introduced to the Festival in 2017 as a family-friendly show, this year’s rendition will see the Festival team collaborating with Access Path Productions to incorporate elements that make the shows more meaningful and enjoyable for audiences with disabilities or sensory sensitivities. Not only is the succinct 30 minute programme aimed at bridging new audience members with contemporary dance; the collaboration with Access Path Productions’s aesthetics of access, the works will also attempt to remove as many barriers to the disabled as possible regardless of physicality or aptitude, offering captioned sound for the deaf to better understand the work or with ramps for the wheelchair-bound, enabling them to appreciate the work without fear of missing out.

The Festival also continues to widen its cultural network with more partners beyond Asia with a new collaboration with Italy under the “Crossing the Sea” project, where Italian choreographer Isabella Giustina was selected to collaborate with T.H.E Second Company to create a new work, to be featured in the Co.Lab.Asians programme. Formerly known as the Asian Festivals Exchange (AFX),  the platform name has been changed to reflect a more accurate trajectory, which embraces the spirit of collaboration and paves the way for an expanding network. Co.Lab.Asians will also feature a new creation by Korean choreographer Ji Kyungmin in collaboration with T.H.E Second Company, and a duet co-choreographed and performed by returning artists Lee Ren Xin and Miwa Okuno, following intensive residency periods lasting from 3 to 6 weeks.

Dancers will also be pleased to know that a wide range of classes, workshops, intensives and talks will be included as part of this year’s Festival, including a 5-day Hofesh Shechter Company Intensive led by Singapore’s very own Zunnur Zhafirah, as well as a talk for audiences new to contemporary dance, held in collaboration with Hotel G, Patron Hotel of the Festival. Zhafirah will also be presenting a duet alongside three other local and regional works at the Off Stage platform, focusing on the work in progress element of a choreography rather than the polished final product, with a 2-night showcase. Finally, Polish company Zawirowania Dance Theatre will b presenting award-winning Spanish dance artist Daniel Abreu’s Real Love, exploring the mystery of birth, passing, and death, as performed by three women at different stages of their lives.

Swee boon concludes: “So many artists have unreservedly shared with us the richness of their artistry and left indelible memories in the hearts of audiences who have followed us since our early years. By inviting some of these artists back this year, I hope to provide our local dance community and audience with a space for deeper thought and reflection as we experience the timelessness of these restaged creations and witness the growth of returning artists who will be sharing their latest works with us.”