A timely reminder of the genius and timelessness of Jit Murad in this reflection on the Malaysian identity.

KUALA LUMPUR – It’s been 13 years since Jit Murad’s Gold Rain & Hailstones was last produced in his own home country of Malaysia. So it’s about high time then that a revival is in order by the Instant Cafe Theatre Company this March.

Gold Rain & Hailstones follows the outspoken and liberal Amy (Farah Rani), constantly feeling like a foreigner in her own home. It’s only when news of her dying father reaches her that she returns home ten years later after studying abroad, and in the midst, attempts to reconnect with her old friends Nina, Jay and Man (Sharifah Amani, Ghafir Akbar and Redza Minhat). Soon, she finds that she’s not the only one struggling to belong, as she discovers her friends have made difficult choices in choosing to remain in their own country, each one seeing Malaysia in a different light. 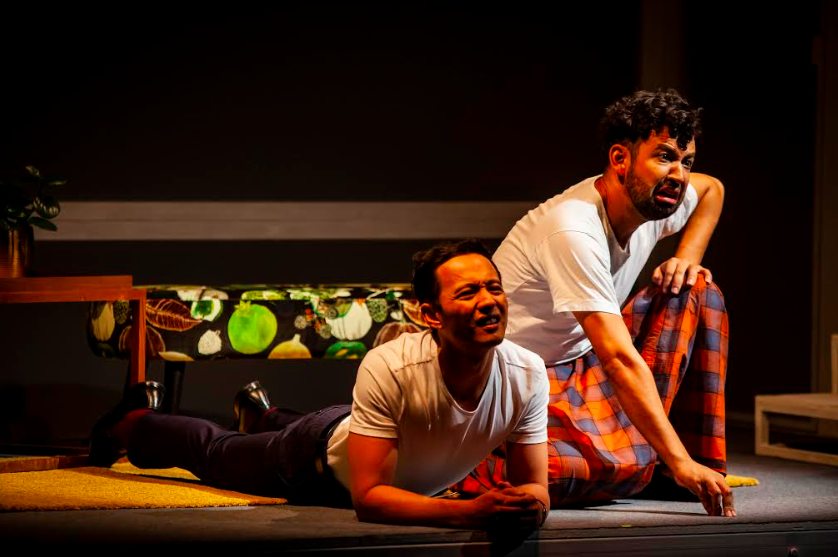 First staged in 1993, Gold Rain & Hailstones is a play rife with the fierce, inquisitive energy of a young playwright, questioning the Malaysian identity and its status as a home to Malaysians from all walks of life. In certain ways, it becomes more poignant than ever in 2019, as the Malaysian identity is in flux once again, and cries of discontent and feelings of unbelonging run rampant throughout the country. Directed by Gavin Yap, the play opens with a projection of childhood photos of the cast, bringing to mind a more innocent time, where identity felt as simple as black and white, before a cinematic opening sequence featuring both the eponymous ‘gold rain’ and ‘hailstones’ as we are welcomed to the show, and given a brief on what to expect. 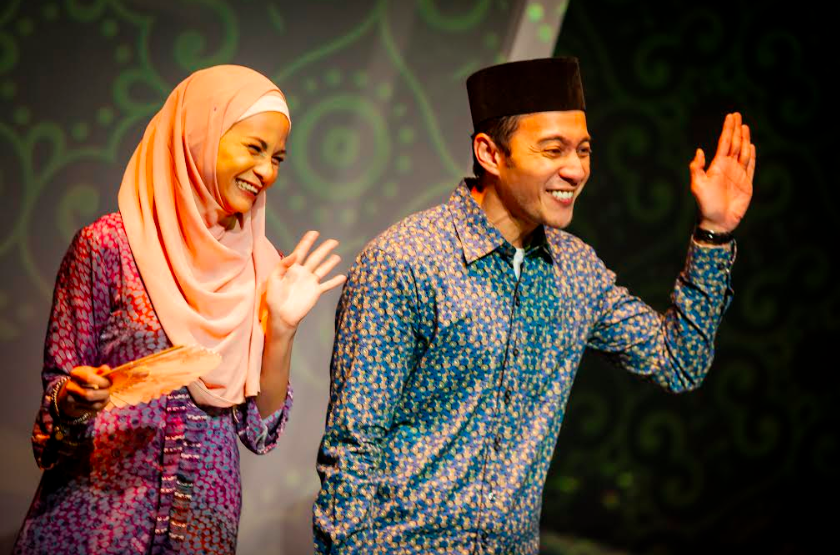 These ‘gold rain’ and ‘hailstone’ projections by multimedia designer Tan Chung Cea remain throughout the rest of the performance, appearing in projection format as a constant reminder of the two opposing views of Malaysia as either home or not that exists throughout the play. These themes are further encapsulated in the strong performances delivered by the entire cast, each one playing a myriad of side characters in addition to their own, transitioning smoothly between each one and immediately nailing the essence of every one of them. For example, the scene between Amy and Jay at a bus-stop in San Francisco was carefully captured by the multimedia design, with the multimedia image reflected the ghetto neighbourhood with the graffiti and grunge.

Protagonist Amy is surprisingly representative of the modern millennial generation, a youth who, as much as she feels frustrated and constricted by her citizenship, still misses her Gardenia white bread sandwiching quintessential Malaysian kaya – a relatable moment for anyone who’s ever lived overseas for a period of time. One particularly sees the contrasts in Amy’s background and education when she sits in a taxi, asking the driver (played by Ghafir) to go to the ‘Monte Carlo’ condominium, with the driver finding great difficulty in even pronouncing the name. Farah Rani delivers a particularly powerful performance as she goes through the entire gauntlet of emotions, returning home and dreaming of being by her father’s bedside in hospital, emboldened by ‘his’ words to not be afraid of anything, and bravely push forth with her whole life ahead of her still. 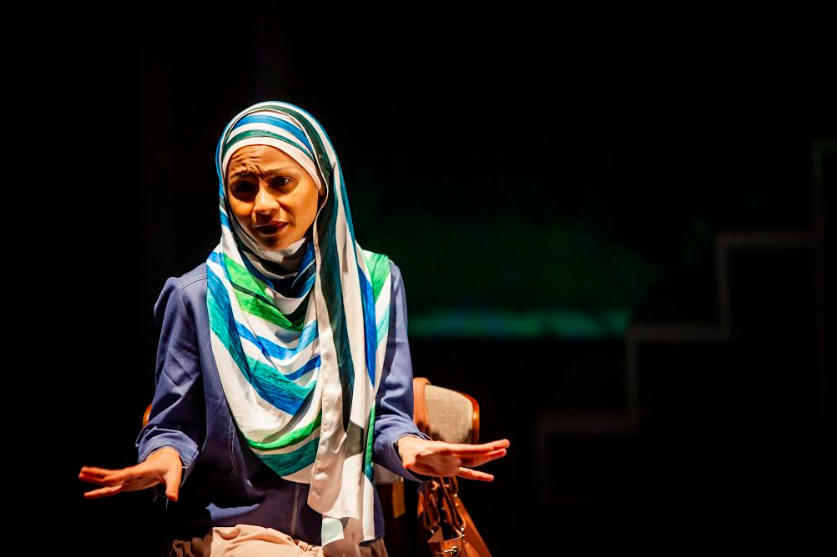 Farah is of course, backed by an equally capable supporting cast, each fully committed to their characters, imbuing them with a believability that makes us feel a distinct connection with each of them, all with their own problems and stories to tell. The play itself opens with Redza Minhat, as Man, coming out to the audience and setting the scene well as he introduces the audience to the premise of the play and Amy’s circumstances, having not heard from Amy herself of her return. He then dons a tudung and becomes Man’s mother, speaking to another ‘nenek’ and gossiping something we can connect with, a familiar character archetype we immediately connect with. Later on, it is revealed that as strong as Man seems on the outside, he hides a stark loneliness in the world that Redza captures in just the right amounts. 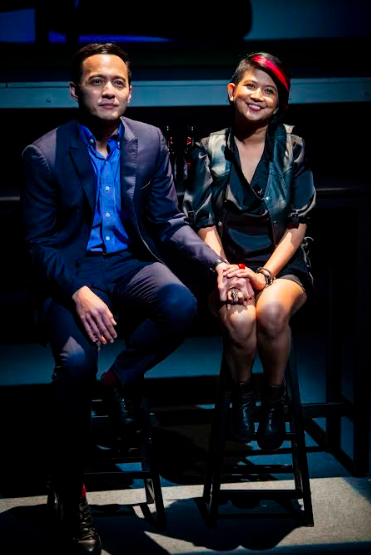 As an upper-class wife, Nina appears to be living the perfect life where she has it all, yet similarly, holds a lot of unhappiness within her behind the masque of joy and satisfaction, a role Sharifah Amani relishes and delivers with gusto. As the fabulous celebrity make-up and beauty guru Jay, Ghafir Akbar delivers a sensitive performance, bringing out a strong sense of vulnerability in a flashback to Jay’s childhood, as he stops getting bullied by selling out his artistic talents for acceptance. The chemistry between Ghafir and Redza is particularly important when it is revealed that there is a strain on Jay and Man’s relationship, due to Jay’s ‘soft’ nature and the implications it might have on Man for associating with him. 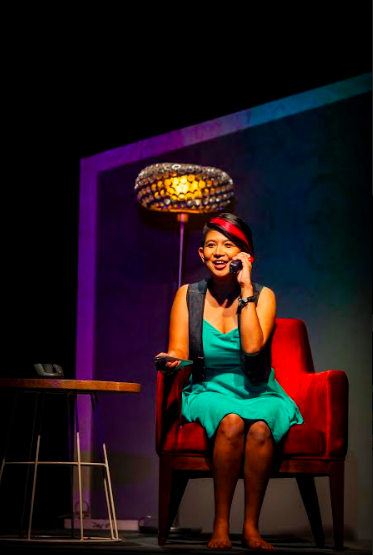 Towards the end of the play, Amy receives a phone call informing her that her father has passed away, and despite how much she and her friends’ lives have changed, they gather as four, finding comfort in each other. Nina’s conversation is simple: she simply wants to be Amy’s friend, and one is struck by how in spite of the distances we put between each other, in spite of the time that passes, true friendships remain stronger than steel and last through everything. Amy stands alone onstage smoking her cigarette and delivering a monologue about her father, and one feels the sincerity of Farah’s performance shine through, believing well and truly that love and friendship do indeed conquer everything, something we are wont to remember to remain united in an increasingly divided world, and to stay steadfast in the relationships that we develop. 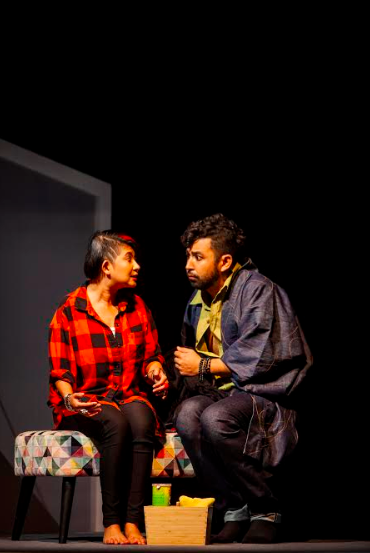 While the premise is certainly simple enough, about a returnee attempting to rediscover her roots and lost friendships, Gold Rain and Hailstones was hailed as a theatrical favourite in its premiere year for a reason – it’s sharp, witty, and incredibly intelligent at teasing out the greater themes of identity and home without being too heavy. Gold Rain and Hailstones is the quintessential Malaysian play – showcasing a wide range of familiar characters one might have encountered in everyday life, a play with recognizable issues that simply put, reflects life itself.

The stories gathered in this play are those worth telling over and over, the realization that it is friendship that triumphs and withstands the test of time. While wordy, it is the visionary direction of Gavin Yap and Jit Murad’s language that keeps the audience members riveted throughout, constantly engaging and with performances that captured each character’s nuances, perfectly on point. Gold Rain & Hailstones is the kind of writing that makes one believe that Malaysia has so many more unspoken voices and stories waiting to be unearthed and told. Jit Murad truly is one of Malaysia’s greatest theatre treasures, and certainly, one who brings the gold rain amidst the hailstones.