The ties that bind us are frayed in this revival of a Singaporean LGBTQ classic.

Written by Eleanor Wong in 1993, 16 years on, Mergers and Accusations remains one of Singapore’s most seminal queer theatrical works. Dripping with sarcastic wit and rapid fire legal jargon, the play remains relevant even today for its unabashed portrayal of citizens afraid to come out of the closet for fear of the impact it would have on their personal and professional lives. It seems inevitable then that it would eventually have received a restaging at some point, this time as part of the Esplanade’s 2019 The Studios season, in this new staging directed by Chen Yingxuan. 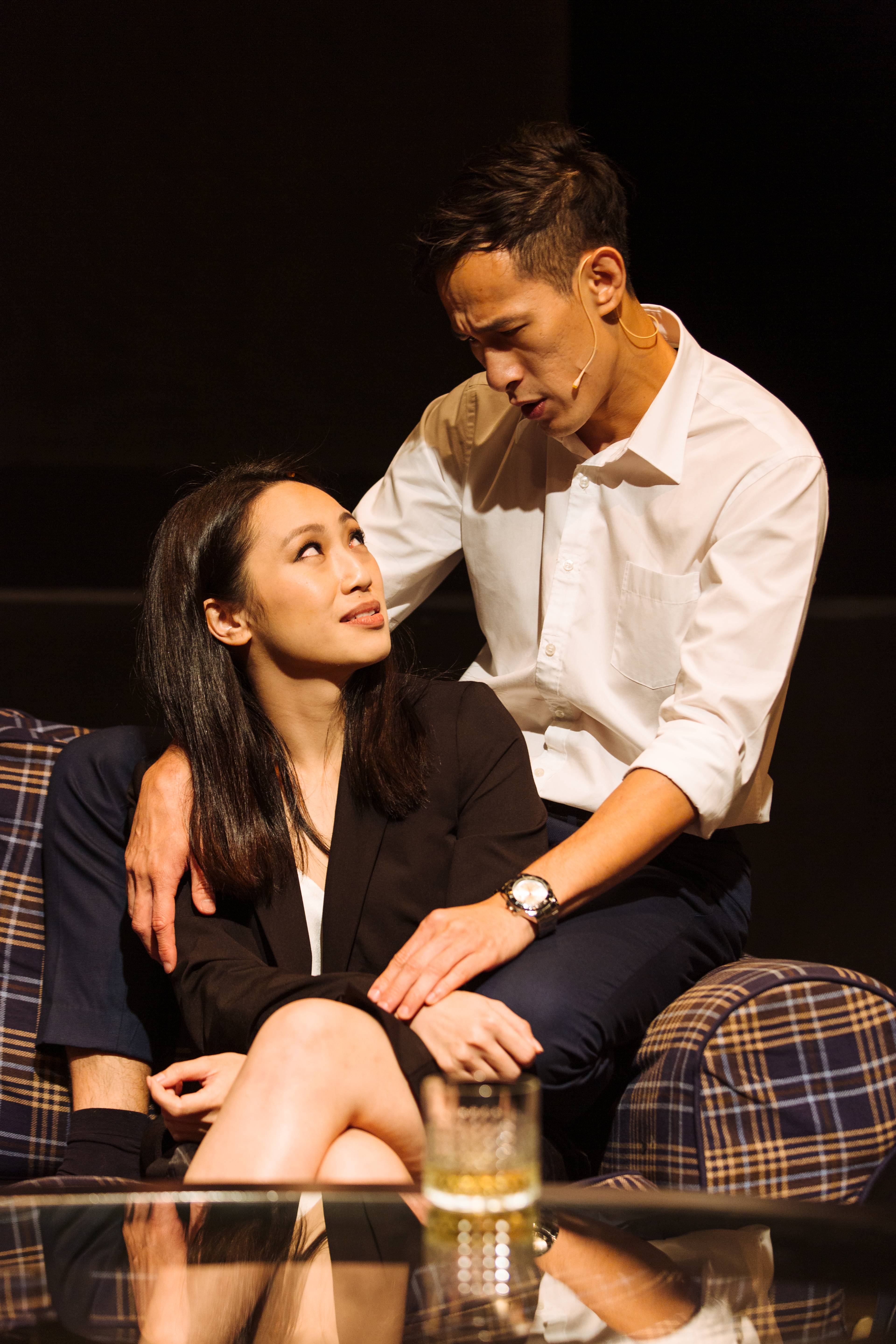 Mergers and Accusations is by no means an easy play to stage, with its structure primarily comprising lengthy dialogues between characters and the inherent drama contained in introspection and less outright drama. The play, in brief, follows hotshot lawyer Ellen Toh (Oon Shu An) and her romantic entanglement with best friend and colleague Jonathan Chin (Shane Mardjuki). Ellen might be gay, but Jonathan still wants to marry her, and thinking about her string of unsuccessful same-sex relationships with no future, Ellen relents to start a family with him. It’s not long before Ellen begins to desire something more, something Jonathan cannot provide for her in their quaint arrangement, especially as out and proud Lesley (Nessa Anwar), the ‘lesbian lawyer from London’, arrives at the firm and catches Ellen’s eye. 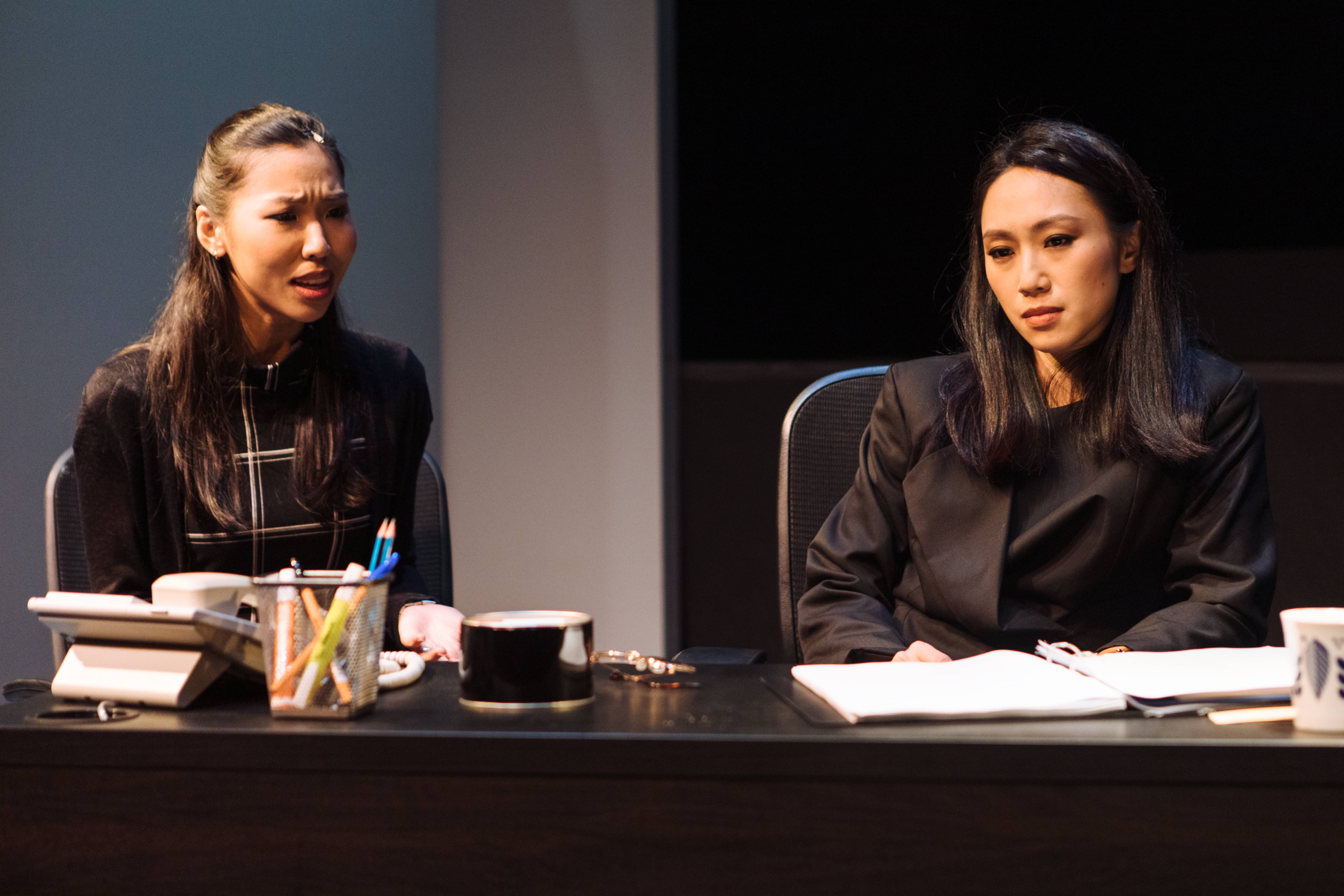 As protagonist Ellen, Oon Shu An equips herself with the husky voice of a chainsmoker addicted to her work, sharply dressed in stylish but practical, form-fitting business suits by designer Anthony Tan, displaying genuinely heartbreaking emotion in a fight scene between Ellen and Jonathan towards the play’s denouement, one that sees her wrestling with her own inner demons in the realisation that she’s been sailing a sinking ship for years, and the fear of finally confronting her truth. Meanwhile, Shane Mardjuki is given a particularly challenging, inherently problematic role as a (half-jokingly) ‘homophobic man-child’, tasked to charm the audience despite his character’s flaws. It is to his credit that he thrusts himself completely into the role of the Peter-Pan like Jonathan, evoking a natural boyish charm that makes it hard to hate his character completely, and displays a good  variation in energy over the course that encapsulates Jonathan’s frustration as an exhausted househusband after the initial romance fades away. Onstage, both Shu An and Shane  share an uneasy chemistry that makes it easy to see why their characters’ relationship eventually fall apart, far better as friends than lovers. 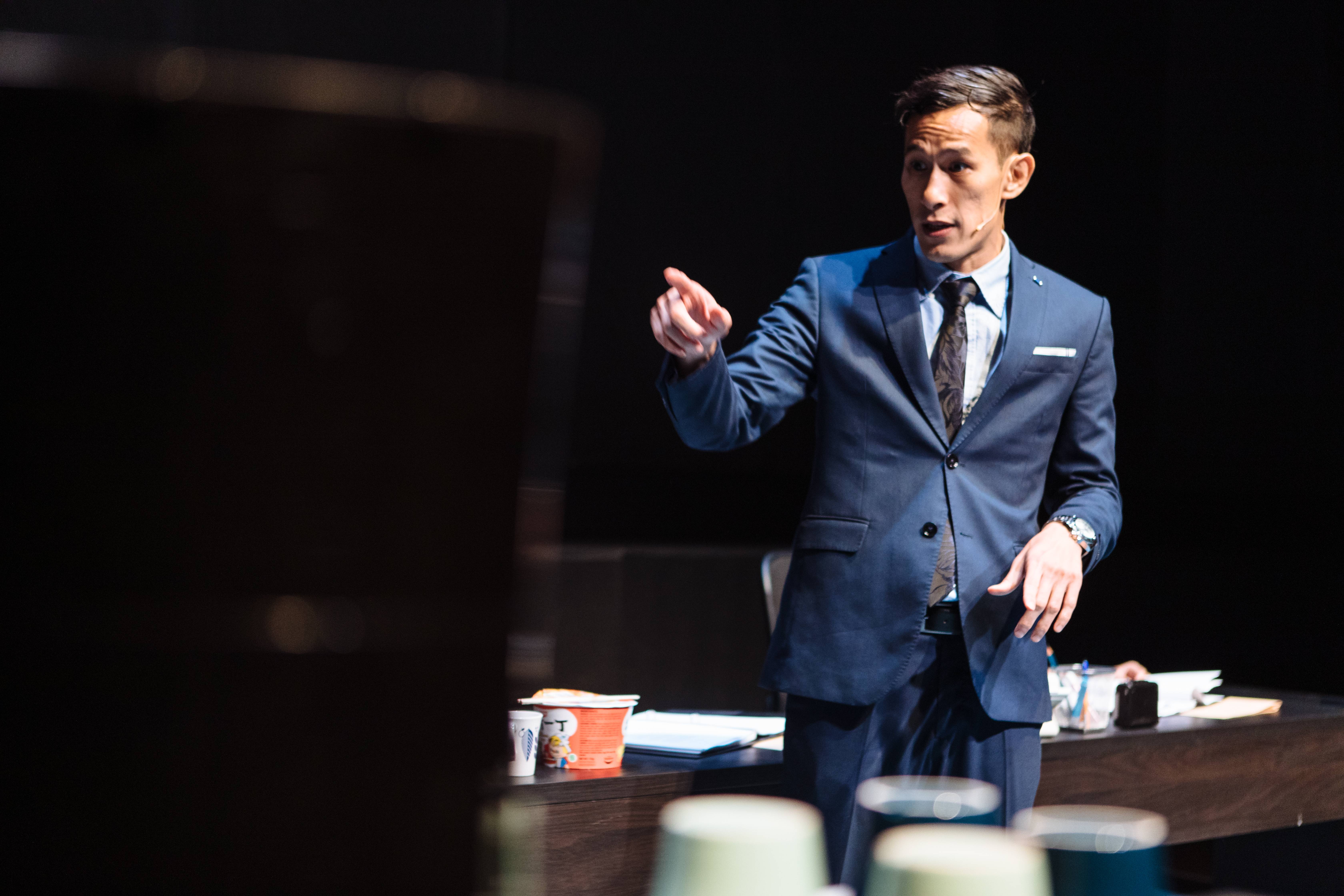 As Ellen’s longtime friend and also colleague Mary, Amanda Tee plays the role well, offering acceptance without judgment, as much as she does not understand the arrangement between the two and consistent belief in the stability of the nuclear family model. Meanwhile, as Lesley, Nessa Anwar struggled somewhat with maintaining a consistent British accent throughout the play, distracting somewhat from some of the play’s most important lines about the importance of being out and proud. However, it must be said that even today, it still takes plenty of courage to portray same-sex intimacy onstage, and the kisses shared between Shu An and Nessa as Ellen and Lesley respectively felt genuine. 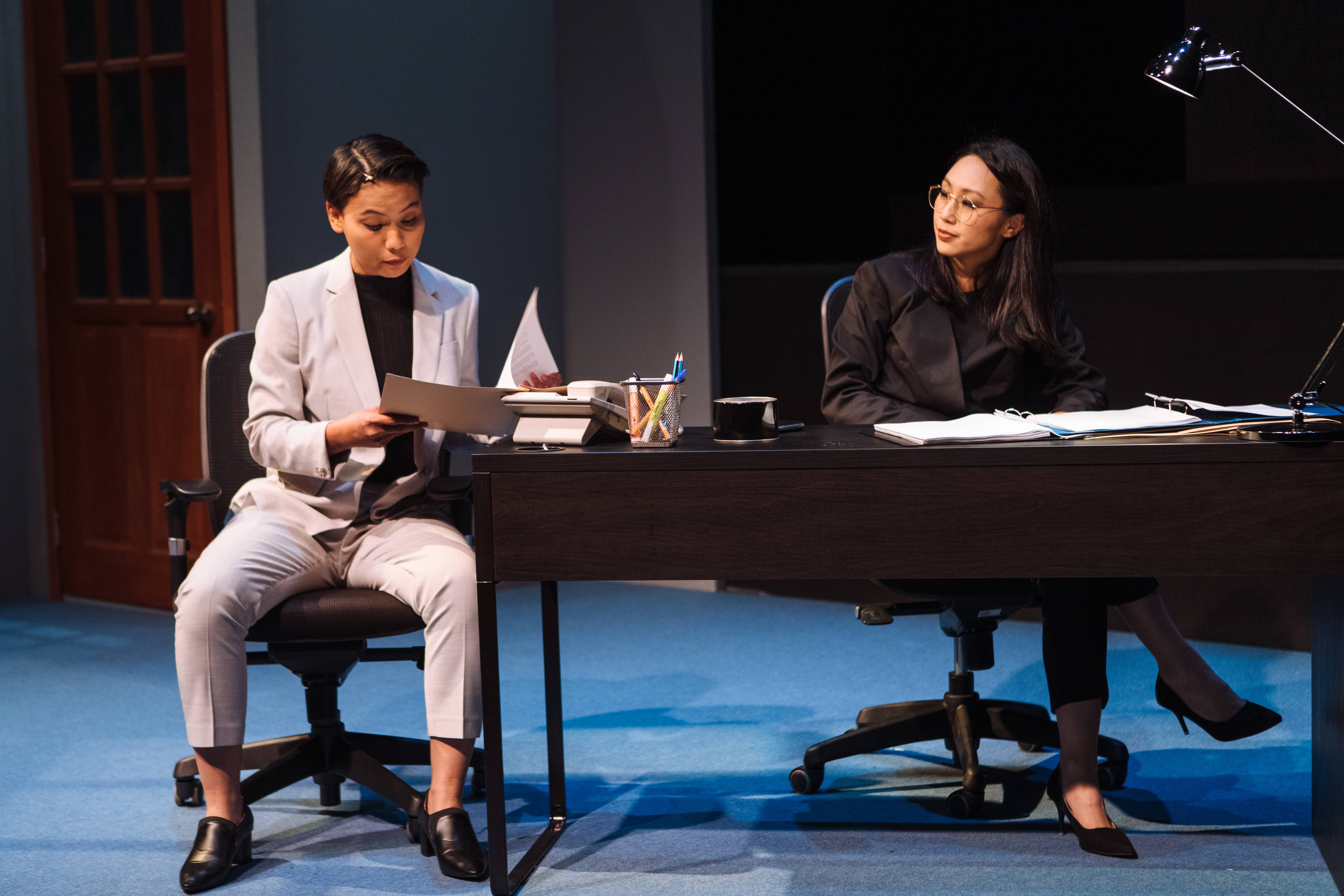 In terms of its set, Mergers and Accusations might have been a rare dip in designer Wong Chee Wai’s illustrious career. Comprising of four distinct ‘rooms’, each capturing the essence of their respective environment, one acknowledges the level of prop detail involved, especially with the pantry portrayed in the office set, along with the minimalist kitchen in Jonathan’s home. However, while one was initially wowed by the use of a sliding door reveal, this later on became more hindrance than help, making certain scene transitions particularly clunky. 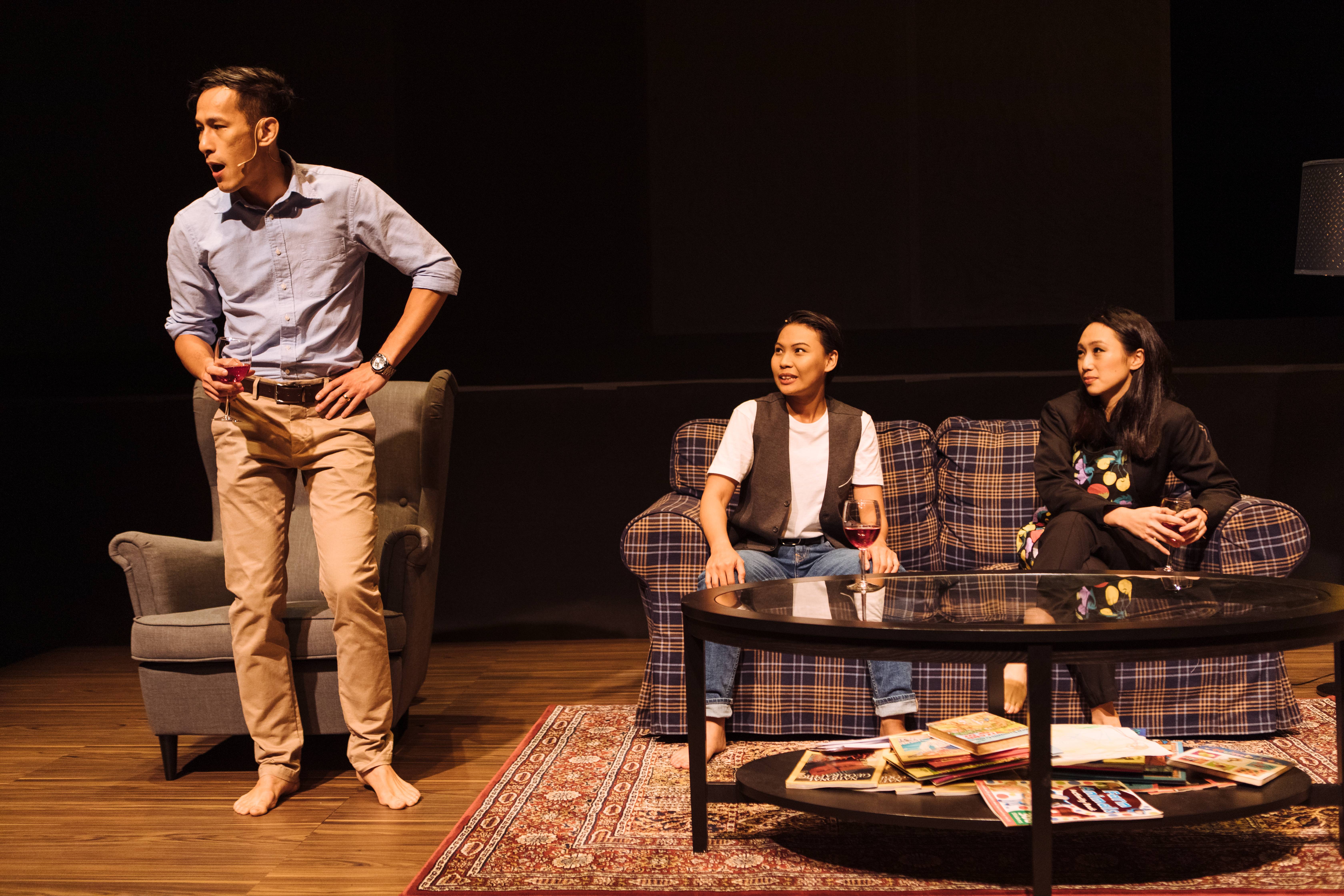 At its heart, Mergers and Accusations remains poignant even today for its portrayal of an abusive relationship doomed from its outset. Resonant for both queer and straight audience members, we feel the pain of both Ellen and Jonathan in their holding on to a social contract that cannot last, a desperate need for something ‘normal’ to feel the semblance of happiness in each of their broken hearts. It is only when they admit to themselves that they were never meant to be together that we can reach the play’s bittersweet ending, rendering both parties wounded but ready for a new beginning, one that leaves them open for true happiness, hopeful that it lies somewhere on the horizon. 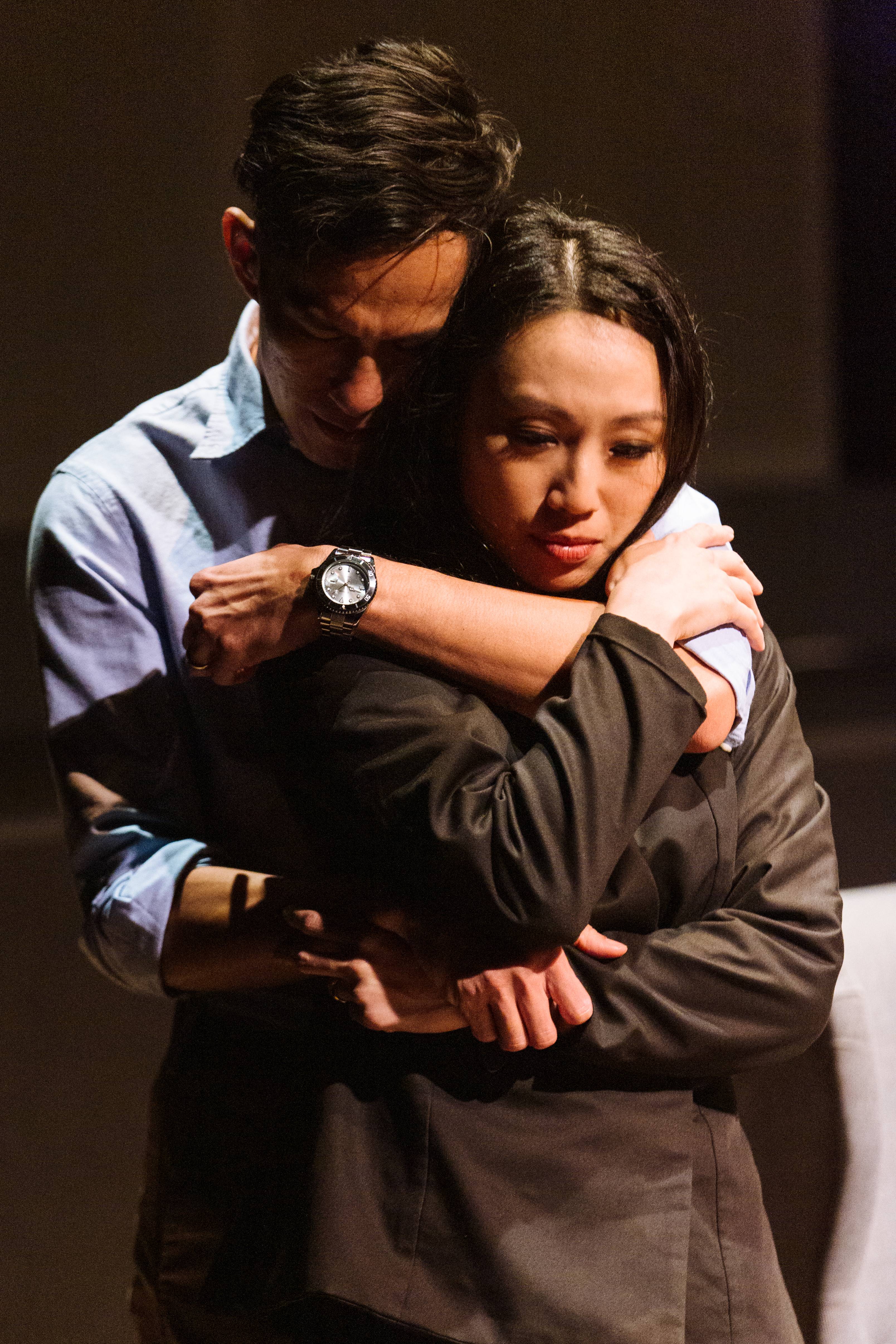 Mergers and Accusations played at the Esplanade Theatre Studio from 11th to 14th April 2019.

0 comments on “The Studios 2019: Mergers and Accusations (Review)”