A call to reduce the distance technology has created.

In the age of Tinder, WhatsApp, and other social media applications, the need to ever meet someone else in person for the sake of conversation has rapidly decreased. But is there still value in that face to face interaction that we’ve forgotten? That’s the crux of contemporary dance company RAW Moves’ latest production, as Ghost Call explores the modern ways we communicate through movement and dance.

Collaborating with playwright Nabilah Said for the first time, Ghost Call begins with a group briefing as we step into the Goodman Multipurpose Studio, explaining how over the course of the performance, audiences are allowed to cross over to either of the two ‘rooms’ at any time, each containing either dancer Matthew Goh or Stephanie Rae Yoong who will be performing. Separated by a divider, it is initially impossible to see what the dancer in the next ‘room’ is doing, seemingly setting each dancer in their own separate worlds. 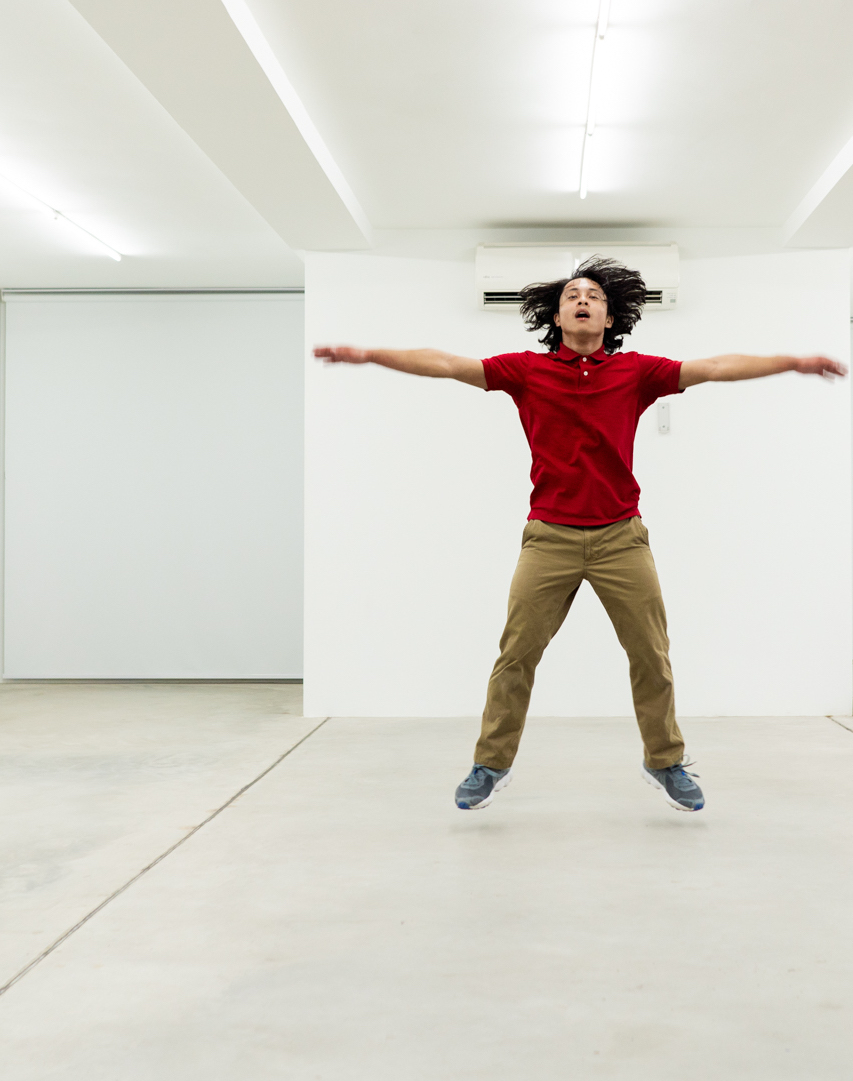 This mystery of not knowing what is happening in the other room at any one point of time is part of what makes Ghost Call such an interesting watch, genuinely sparking a sense of curiosity and fear of missing out at almost all times. Throughout the performance, we see and sense the change in energy and atmosphere as various audience members move seamlessly and quietly from room to room, playing into becoming part of the performance. For us, we chose to stay in Matthew’s room, with the performance beginning with Matthew mingling with the audience members, from time to time penning down notes on a Post It pad, while we hear technological sounds in the background. Dressed in casual everyday wear, Matthew could even pass as an audience member, hard to differentiate him from the audience, coming to represent an ordinary person engaged in a daily routine. Matthew then sticks up his notes on the barrier, and curious, the audience edges closer to read what exactly they say. It turns out that Matthew has been penning down his observations of audience members, discussing the kinds of clothing they wear or the thoughts going through his head. 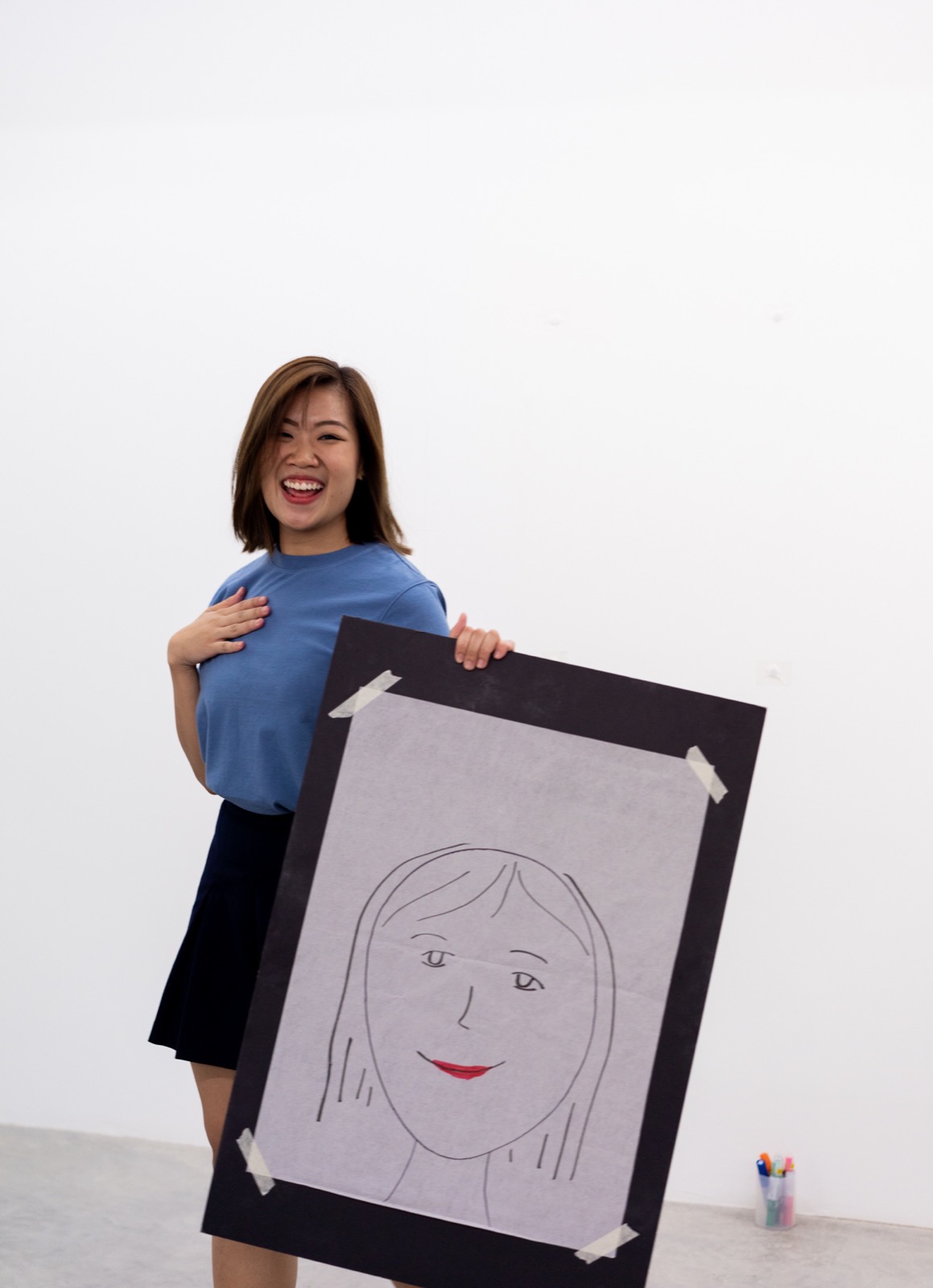 The performance really begins proper when we hear a voiceover that introduces us to the world Matthew and Stephanie have found themselves in. We begin by being tasked to draw two portraits of Matthew’s face, a good means of audience participation as we threw ourselves into the activity. With the portraits complete, the voiceover speaks once again and asking us to vote for the better one, echoing the words ‘the more popular you are, the happier you’ll be’, a reminder of our ‘likes’ obsessed culture with channels such as Instagram or YouTube. Without being told exactly how to vote, it’s interesting how audiences seemed to automatically react with applause or cheers for their preference, eventually deciding which portrait was the clear winner.

Matthew and Stephanie then slip each of their winning portraits under the barrier to each other, and we hear the audience on the other side react, while we watch Matthew examine the depiction of Stephanie with interest, with the voiceover commenting: “a match made in clicktopia’. We think of our own digital messaging culture, where we exchange photos over text, but so rarely manage to find time to actually meet and get to know each other besides the photos we choose to define ourselves by. 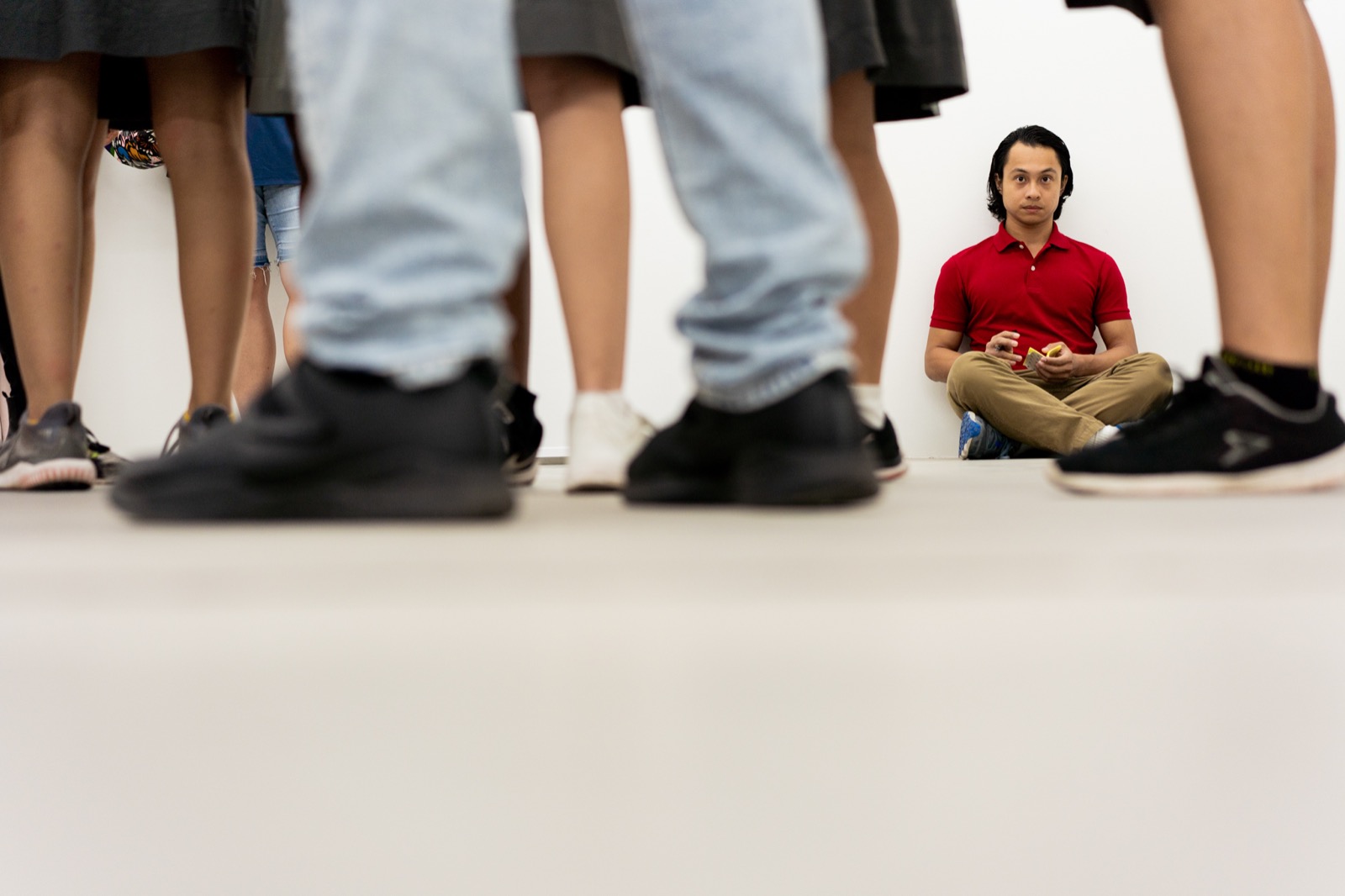 The voiceover then begins to repeat itself, over and over again, moving into a monotone. The dancers grow frustrated, their movements frenzied as the voiceover assures them that ‘everything will be fine’, over and over again. Reacting to this, Matthew’s movements go berserk, thrashing haphazardly, dramatically around the space and he expends his energy. Taking a peek into the other room, we notice that Stephanie’s room is the polar opposite, the lights turned off, herself tucked under a blanket with a torchlight, yet still visibly struggling, showcasing how different people handle their problems differently. 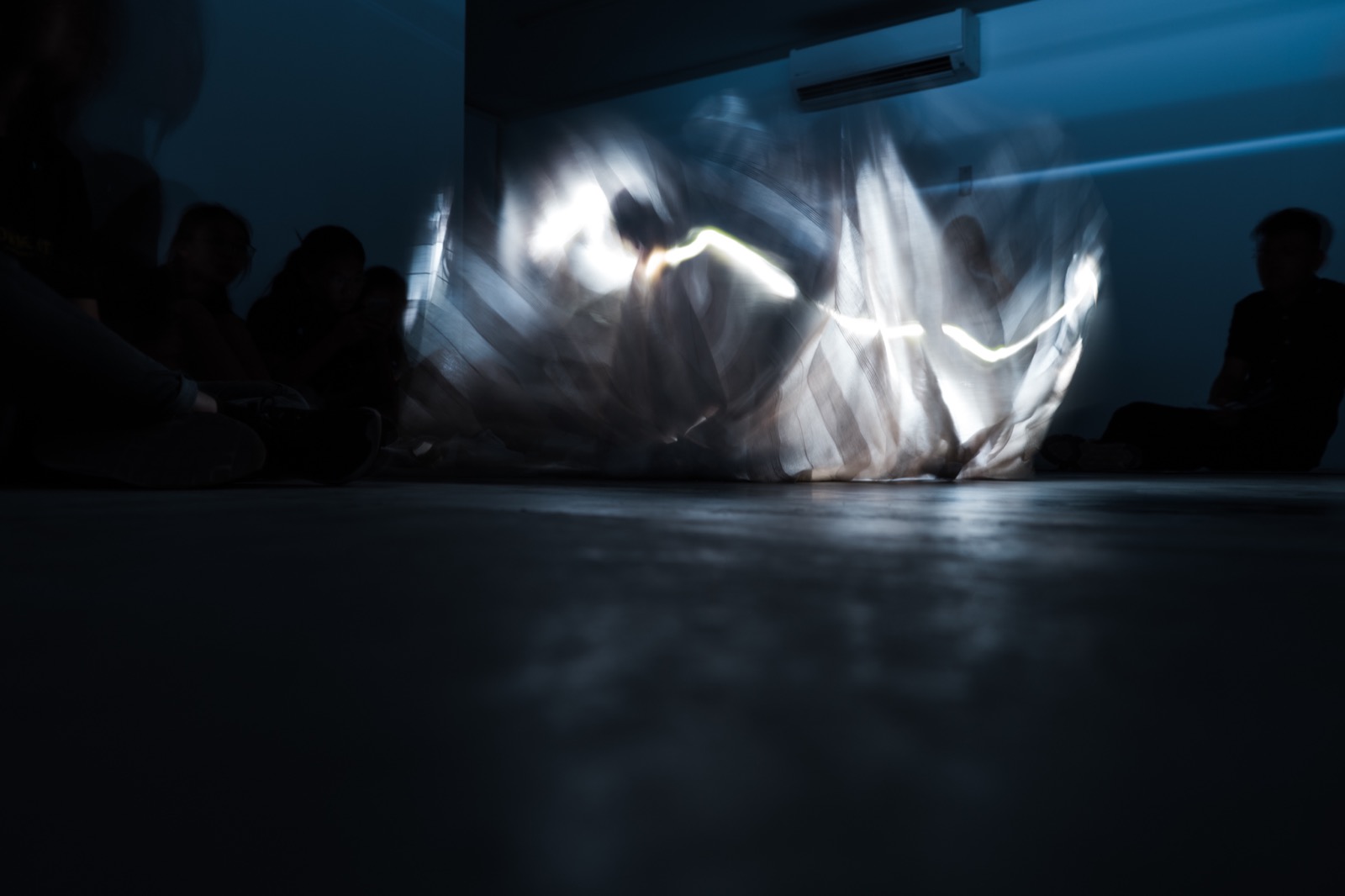 Suddenly, there is a breakdown in the ‘system’, and the barrier is no longer ‘functional’, allowing Matthew and Stephanie to remove it and finally, reveal their own worlds to each other. As they stand there facing each other, the audience too on either side witnesses each other, at last able to simultaneously see what is happening in both ‘worlds’ at once. The dancers turn on a bulb beside them, as if reaching an epiphany, and take out their phones to call each other. Saying hello to each other, we hear their voices for the first time, and they turn their heads to look at each other; one could imagine them with their hearts beating rapidly and excitedly, the tension finally breaking as they finally see each other in real life.

We feel a warm and fuzzy feeling from that single moment of genuine interaction, impressed with how Nabilah and the dancers have created this story, this moment where we ourselves become aware of how cold our technological interactions can be, and become keenly aware once again of the importance and necessity of meeting someone in person, and the value of human face to face contact.