Tadashi Suzuki draws out the wicked and the divine from a classic Greek tragedy .

Staging a classic Greek tragedy has never been an easy feat for any theatre company – as enduring as these stories are, the true challenge lies in having a production simultaneously bring something new to the tale, while still preserving the essence of message of the original tale. In the case of Dionysus, Japanese theatre director Tadashi Suzuki does all that and more, managing to metamorphose Euripedes’ classic play into something that transcends even the source text, coming across as a sacred ritual one has the rare privilege of witnessing live.

Dionysus, in short, sees the eponymous god of wine exact punishment over Pentheus, King of Thebes, who seeks to eradicate all followers of the Dionysus cult. What follows is a tale of trickery and tragedy, as Pentheus is lured to observe their worship on Mount Cithaeron, where he meets a grizzly end at the hands of the delirious worshippers who tear him limb from limb, including his own mother Agave.

While the version we caught last year in Jogjarkata possessed an eerie air of the supernatural (owing to being performed in front of the imposing Prambanan Temple), this staging of Dionysus still manages to retain the sense of the epic and mystic through its performance alone. Tadashi Suzuki’s direction bestows an unusually powerful air of discipline and professionalism upon the international cast of Dionysus, unmatched by few other companies or even productions. It is especially interesting how each actor continues to speak in their native tongue (Chinese, Javanese and Japanese), yet the script manages to flow perfectly, the performance transcending language barriers, and evidence of the discipline and chemistry Suzuki has instilled in his entire cast. 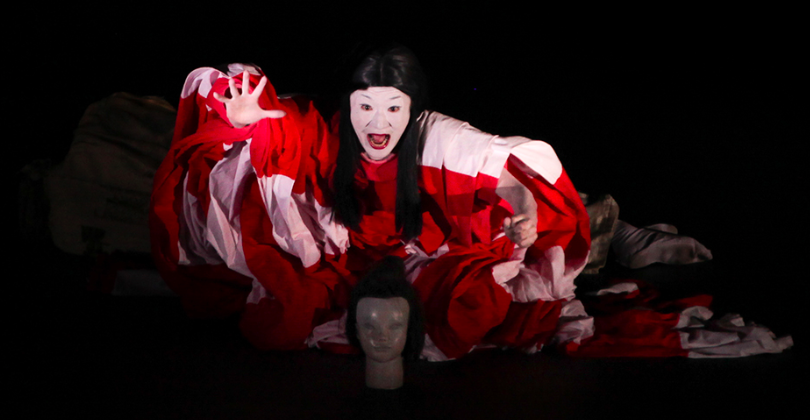 Dionysus’ set is deceptively simple – just six chairs upon which the priests of Dionysus are seated, along with Niwa Makoto’s sparse but focused lighting. But in truth, this is all Dionysus needs to have the desired impact, with our eyes always focused on the acting itself, undistracted by anything else, with the direction displaying complete control and mastery over knowing exactly where each and every actor must be onstage at any point to create the maximum impact and emotion. From the very first jarring, terrifyingly ominous notes of Takada Midori’s score to the precise, choreographed footwork and movements of Dionysus’ bewitched followers, every stage direction and moment feels deliberate, every action fully committed to and seen through, each one imbued with a heavy sense of gravitas befitting this tale of man versus god.

As the priests arrive onstage, clad completely in ghostly white makeup and costumes, their movements are sharp, structured and synced, emanating the sense of an ancient ceremony. This feeling is felt throughout Dionysus, particularly as the Maenads (female Dionysus believers) make their appearance, clad in flowing red and white robes from designer Auguste Soesatro that trail across the stage as they go by, perhaps a metaphorical lake of blood, passion and anger to represent their frenzied worship, and a striking contrast against the inky blackness of the rest of the stage. The Maenads have an almost supernatural aura with the way they move, deathly serious in their expressions, their faces painted white, while a cloud of white powder manifests itself around them with every action. 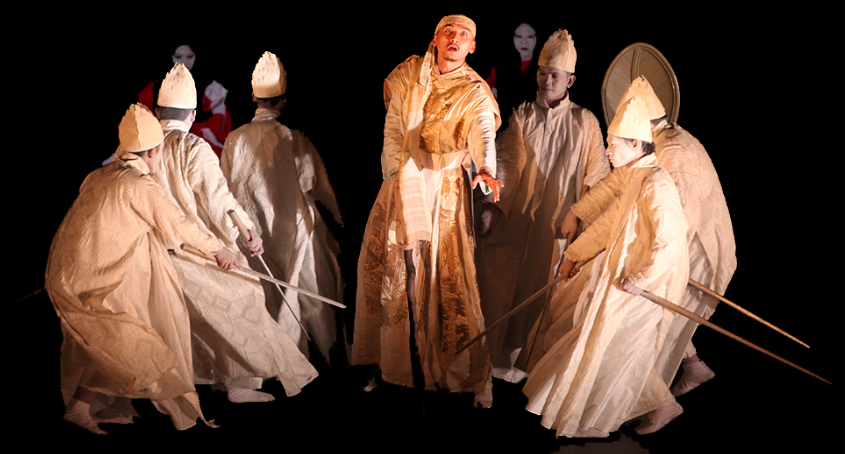 As Pentheus, Chinese actor Tian Chong speaks with complete seriousness, his face locked in an expression of grim determination as he threatens the priests with complete evisceration. Interestingly, this works to Dionysus’ advantage in managing to create uneasy humour later on, as Pentheus breaks his stoic front to become aghast and embarrassed at the thought of becoming disguised as a woman. One is left particularly disturbed once he finds himself completely consumed by madness, his eyes widening and his words insane, before the priests destroy him, running circles around him before elegantly drawing their swords, one by one stabbing and slicing his body, as he collapses in one of the most poetic stage deaths we’ve seen. 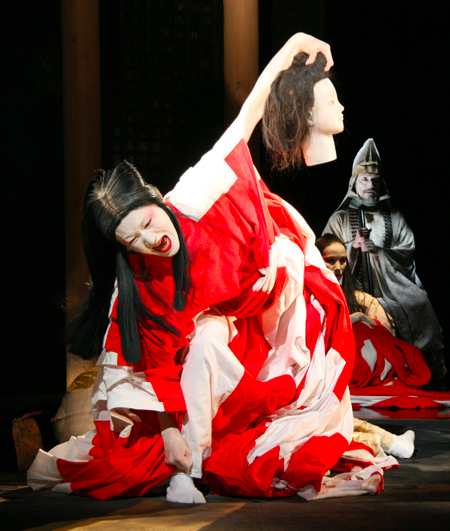 Of the entire cast though, it is Japanese actress Naito Chieko, as Pentheus’ mother Agave, who steals the show the moment she emerges from the shadows, eyes unblinking as she makes her way to the front, stepping over the dead body of Pentheus. When she speaks, her voice is lowered, possessed as her lips warp and stretch to enunciate every word with gusto, savouring every sentence as she gleefully brags of her kill, deliriously fantasising of the praise her father and son will shower upon her. When she finally snaps out of her madness and realises the terrible sin she has committed, her cry of anguish echoes through the entire theatre, plunging the audience into the same utter hopelessness and agony that reverberates through her entire body.

With Dionysus, Tadashi Suzuki more than proves his status as a modern theatre master, having inculcated his actors with a kind of sorcery as they channel the very spirits of Greek tragedy past to perform a work that haunts with its devastatingly beautiful imagery, the precision and commitment displayed in every cast member in every scene, and the pure, visceral emotions evoked. Dionysus acts not only as a violent warning of the pitfalls of blind faith, but doubles as an exemplary show of what an auteur and visionary director is capable of producing in a performance, each actor utterly devoted to bringing to life Suzuki’s vision, as we spectate upon this bloody tragedy and ache with existential dread.

Dionysus played from 17th to 18th May 2019 at the Victoria Theatre.