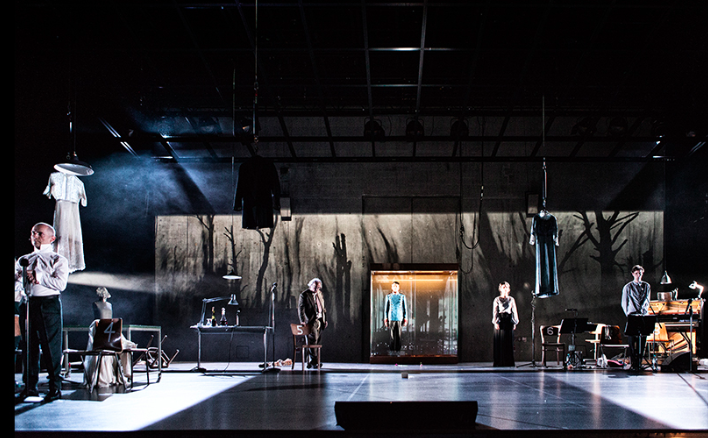 After closing SIFA 2018 with An Enemy of the People, Germany’s Schaubühne Berlin has now returned to open SIFA 2019 in an almost poetic act of programming continuity. In a similar vein to their production last year, Beware of Pity is a scathing, pointed look at the darkness of the human condition, and this time around, sees the ensemble team up with legendary director Simon McBurney to lend his hand and vision to bringing the work to life.

Adapted from Stefan Zweig’s 1939 novel of the same name, Beware of Pity follows Anton Hofmiller, a young Austrian cavalry officer stationed on the Hungarian border in 1914 as he befriends a local family and finds himself increasingly drawn to Edith, the crippled daughter of patriarch Kekesfalva. As much as he has good intentions in his heart, Hofmiller’s actions are blinded and driven by obligation to his sense of pity for the girl, and as he makes one blunder after another, it’s not long before he drags her into a rollercoaster of ‘will they won’t they’, hurtling the play towards an inevitable tragedy. 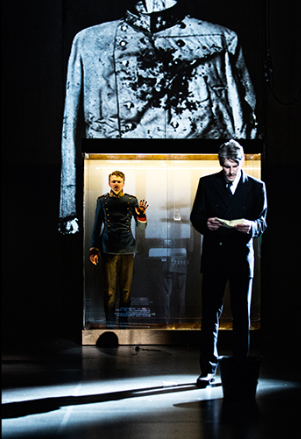 Clocking in at nearly two and a half hours without intermission, McBurney’s adaptation of Zweig’s novel is given the necessary gravitas and weight to feel like a work of staggering importance, presenting a personal tragedy exacerbated and illuminated by its precedence to the earth-shattering World War I. In part due to its sheer length, this is a production that, if it is to be appreciated, requires a degree of audience investment from the very beginning if one is to see it through to the bitter end.

Beware of Pity makes it obvious from the start of its constructed nature, the house lights dimming only after actors make their way onstage, framing the entire play as a recount from Hofmiller’s point of view. In an almost Brechtian fashion, we are constantly aware of the likely biased account of events we are seeing, with Hofmiller the narrator (Christoph Gawenda) speaking, while Hofmiller the memory (Laurenz Laufenberg) performs. When characters speak, they are ventriloquist puppets for the ensemble to speak through, with Edith (Marie Burchard) in particular given an almost maniacal, inhuman voice by Eva Meckbach, and the audience keenly understands that way we are seeing things is entirely through Hofmiller’s eyes. Perhaps, by understanding the play as a human construct, we are granted power via understanding that we too are able to take control of our narratives and dictate our lives the way we want to, without falling to the same mistakes the characters do. 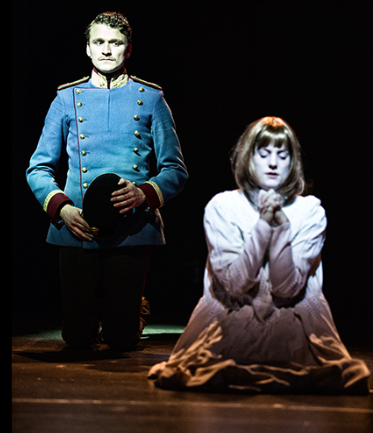 At the heart of Beware of Pity is its concern precisely with the nature of pity, and how the degree of sincerity behind moral actions have very real consequences. Given the context of war, there is the additional theme of trauma from battle one can only assume Hofmiller suffers from as he showers Edith with his pity, using her as a vessel by which to bestow ‘kindness’ upon and assuage his own guilt. Hofmiller’s supposed acts of kindness continually complicate his predicament, with his unwillingness to commit fully to an act his fatal flaw, leading Edith on before throwing her aside with his indecisiveness. Hofmiller himself becomes a subject of pity for his ill-conceived ideas, consistently failing in spite of his best intentions, and it is through this that we are made to realise the dangers of falling prey to the lure and instant gratification of ‘doing a good deed’ without considering its impact.

Throughout the play, one cannot help but feel constantly discomforted by its multi-faceted characters, their moralities somehow eerily slimy as they directly oppose the words coming out of their mouths. Every character hides a shocking double personality, with how a con artist ends up going down on one knee to propose to his victim, or simply pulling away physically leads to characters’ suddenly threatening suicide. Nothing is ever as it seems, and in its own way, there is a painfully savage realism to the way these characters are portrayed in all their human foibles, each character a warped mirror onstage by which we reflect on our own thoughts and actions with fear, knowing full well that whether able or cripple, soldier or citizen, we are all very much capable of doing harm to others, our own conscience capable of that same whimsy and indecision, the first step to a downfall. 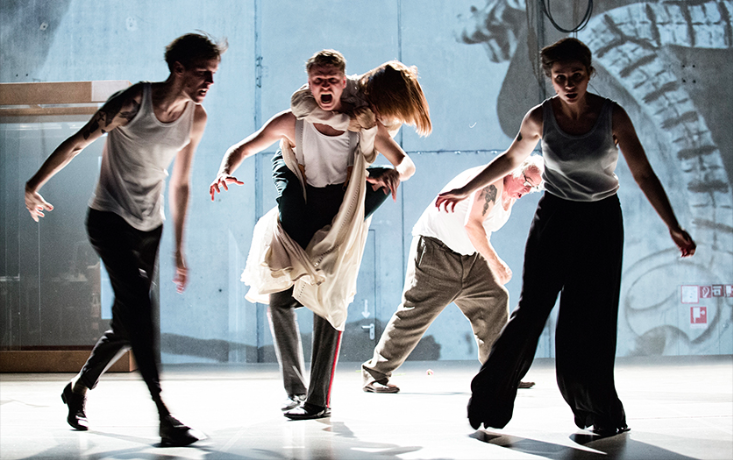 Beware of Pity also works because of its technological mastery, wherein various elements come together to craft an ambience of dread. The use of video projection from Will Duke stretching across the entire wall at the back of the stage keeps audience members hooked on to the visuals, with stark landscapes of frenzied battlefields and monochrome hills contributing to the bleak atmosphere that characterises the play, or the inventive use of a visualiser to amplify mood via objects such as letters or a pair of razor sharp scissors. Pete Malkin’s score is nervewracking, keeping us on tenterhooks as we watch Hofmiller precariously tiptoe around his lies, while Paul Anderson’s riveting lighting design completely transports us from dreary castle to bustling pub, or dramatises an already fearsome storm with an aggressive flash of strobe lights, making the onstage action crawl to a slo-mo. Perhaps it is these same strobe lights that are themselves revealing of what Beware of Pity aims to incite in its audiences – a distinct sense of discomfort and unease as we watch what should be an act of charity subverted to become the planting of the seeds of doom and destruction instead. 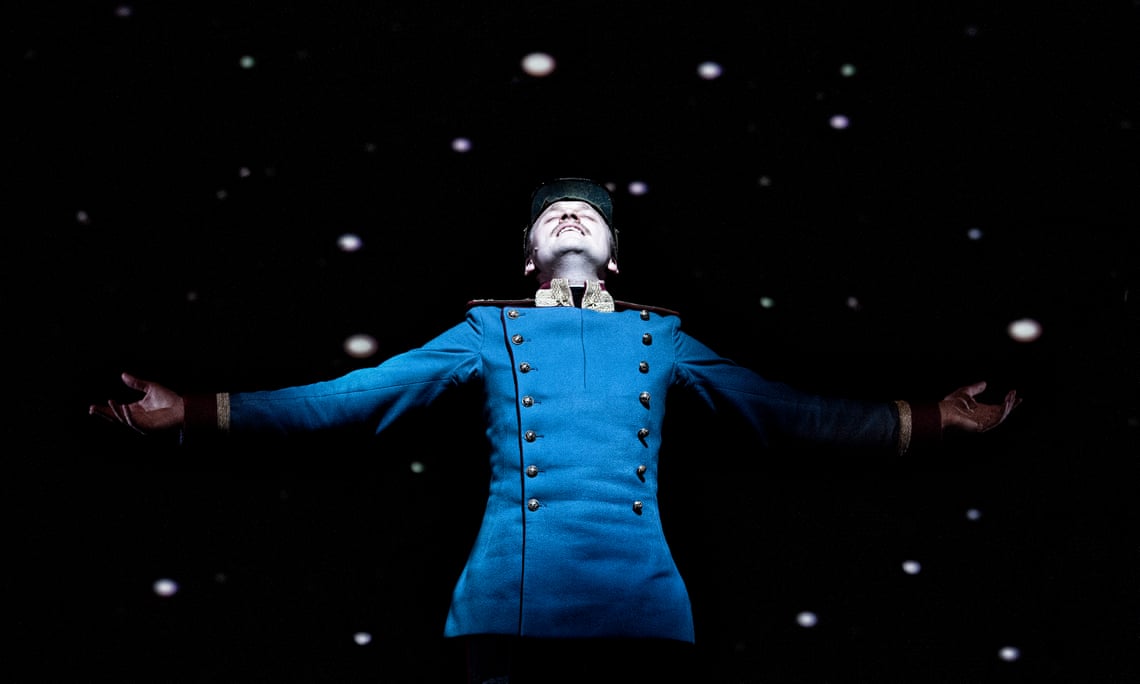 By the end of the evening, Beware of Pity has revealed itself to be a richly textured play, akin to a novel brought to life onstage with its layered, detailed script that only adds to how much we feel for each characters. Even beyond Hofmiller, each character is complicated in their own way, from Kekesfalva’s secret past as a con artist, to Edith’s primal, vivacious thirst for life in spite of her disabilities. This power is felt, in part thanks to the ensemble’s strong onstage chemistry with each other that allows every word and action to hit with unexpected force, and Simon McBurney’s ability to make every small movement feel as significant as the impact of a sledgehammer. These characters are rarely, if ever victims, each one’s fate very much a result of individual choice and the way they’ve been stereotyped or programmed by society’s unspoken rules and regulations that lead to their fall.

Beware of Pity then acts exactly as its title suggests – a warning to all of the often problematic nature of charity and goodwill. As Simon McBurney himself states in an article in The Guardian, “intentions are merely a veneer, a kind of superficial cultural glue from which we are, frequently, unable to free ourselves.” We watch Hofmiller trapped in a glass case, the invisible walls of guilt constructed from societal obligation his prison to bear, and know that to avoid the same fate, we must approach pity with care, understanding that we act not out of selfish means to make ourselves feel better, but a genuine want to help, by seeing the other person as an equal.

Beware of Pity runs from 16th to 17th May 2019 at the Esplanade Theatre. Tickets available here