Using the labyrinthine world of Hong Lim Complex to tease out issues of conflict and change.

Much like their name suggests, contemporary dance company Dance In Situ is best known for their productions taking place in unexpected locations, eschewing the traditional stage to perform in everyday, neighbourhood spaces ranging from Bedok Maze, to Ang Mo Kio 3G Centre, to Chinatown MRT Station. This time around, with their 5th production, the company takes on the labyrinthine world of Hong Lim Complex, a sprawling, multi-storeyed collection of apartments, offices and shops, leading audiences all around it in a ‘performance walk’.

Choreographed by P7:1SMA’s Norhaizad Adam, and co-created with sound designer Chong Li-Chuan and the ensemble of eight dancers (Muhammad Sharul Mohammed, Nah Jie Min, Syarifuddin bin Sahari, Hasyimah Harith, On Wei Tian, Jonit Zunnur Zhafirah binte Sazali, Chia Kok Kiong Jason and Xie Shangbin), Complexnya begins in the courtyard on the fifth floor of Hong Lim Complex, where we are asked to take a moment and enjoy the beautiful view as the sun sets over a panorama of Chinatown, making conversation with our fellow audience members while the dancers mill around the space, some gazing into the distance, and others breaking fast. 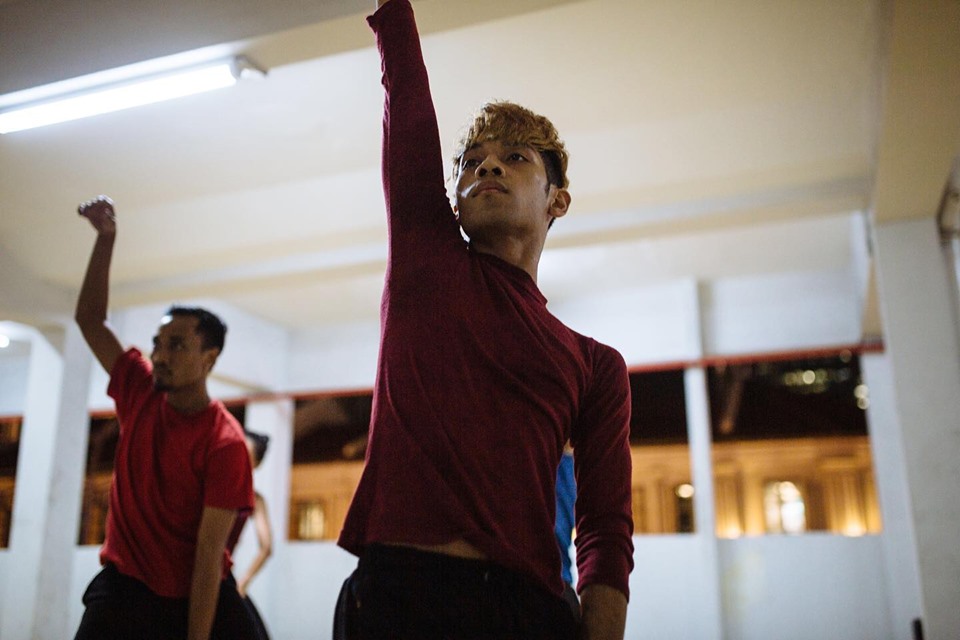 The performance itself begins suddenly and without warning, with the dancers dropping to the floor and crawling backwards, spider-like, as if possessed, slowly making their way to a single pillar. As they assemble, they join hands and surround the pillar, all eight connected in some way and locked in a kind of writhing embrace, like a strange protector. One thinks of the desperation to preserve the old buildings, their history, and their foundations.

From here, the dancers break off suddenly, darting away to dash to a different part of the complex, and we move to follow them. One is impressed with the amount of direction and planning that has gone into this, as the dancers strategically situate themselves to act as wayfinders, allowing audiences to easily follow and understand the route we’re meant to take, as well as acting as physical boundaries to block our exits at certain points, demarcating the performance space each time.

Noticing that half the dancers wear red shirts and the other half blue shirts, we are reminded of Shakespeare’s Romeo and Juliet, and the conflict between the warring Montague and Capulet houses, something that is reflected in Complexnya with the uneasy interactions between members of the red shirts and the blue shirts. We see the relationships between both groups shift throughout the performance – already we see this in Muhammad Sharul Mohammed and Chia Kok Kiong Jason’s performance at a dark metal stairway hidden away behind the main building, at times mimicking each other as they climb up and slide down, at others, attempting to maintain that distance, or even carrying each other away to safety as they collapse. 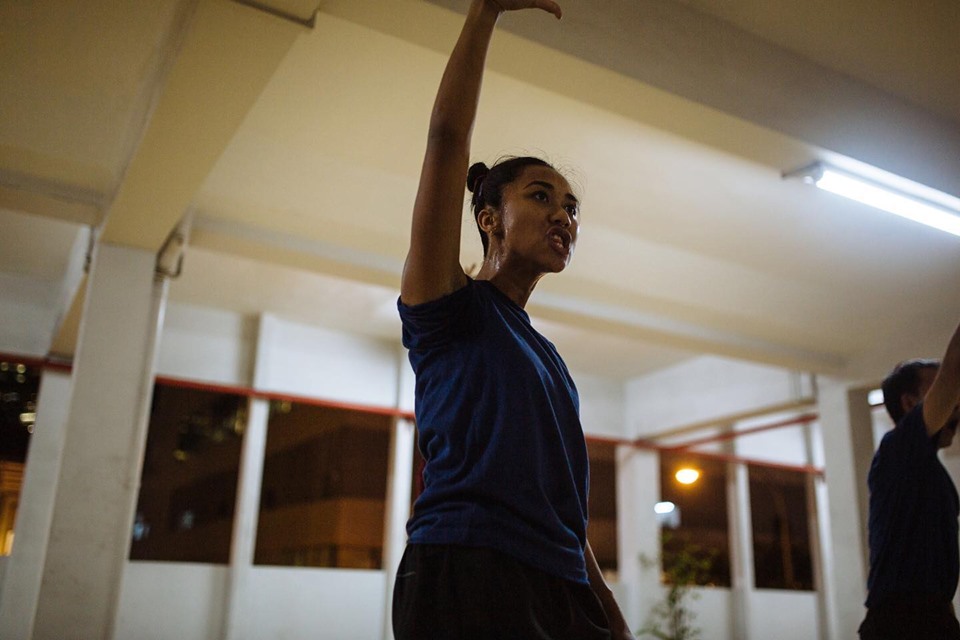 Finding ourselves walking down corridors and narrow stairways, there is a distinct sense of claustrophobia made greater as the dancers confront each other through minor altercations in each ‘scene’. Eventually, we reach a foyer, as Muhammad Sharul Mohammed paces in a set pattern while his hands form shapes reminiscent of Indian dance, before looking down at the floor beneath us, where the other dancers are moving as a group, forming shapes and patterns amidst the wide open space, as if all are engaged in an ancient ritual, while Chong Li-Chuan’s unnerving, throbbing sounds permeate the atmosphere. The dancers dash up to us, and again, they engage in a form of combat as they walk the space, while two dancers in the centre attempt to vie for dominance and attention. The energy here is incredible, and one can see the dancers exerting power and force as they leap onto pipes and thrust themselves around the space, stretching their bodies out. One sees each group as engaging in conflict over territory, almost as if they were rival gangs attempting to oust each other and take over the entire complex for their own.

Before we know it, the dancers suddenly split into two groups based on their respective colours, and run off in opposite directions. Audience members are given a choice – which group do we follow? Catching up to the blues, we find them huddled together, as if communicating some kind of battle strategy to perhaps foil the reds. They work together, using their own bodies as a stairway for each other to climb to a high point, before we are led to a darkened space, right in front of a foreign worker’s makeshift dormitory. The dancers arrange the audience members one by one into a line, seemingly to no end with no discernible logic in mind, preparing us for battle, before finally, we are led down a narrow walkway, a white space dead centre, a strobe light flashing upon it. We see the other group of audience members on the other end, supposedly having done the same as us, and we are all squeezed into that small white space. Successfully having fit us all in, they dash away, and the performance ends. 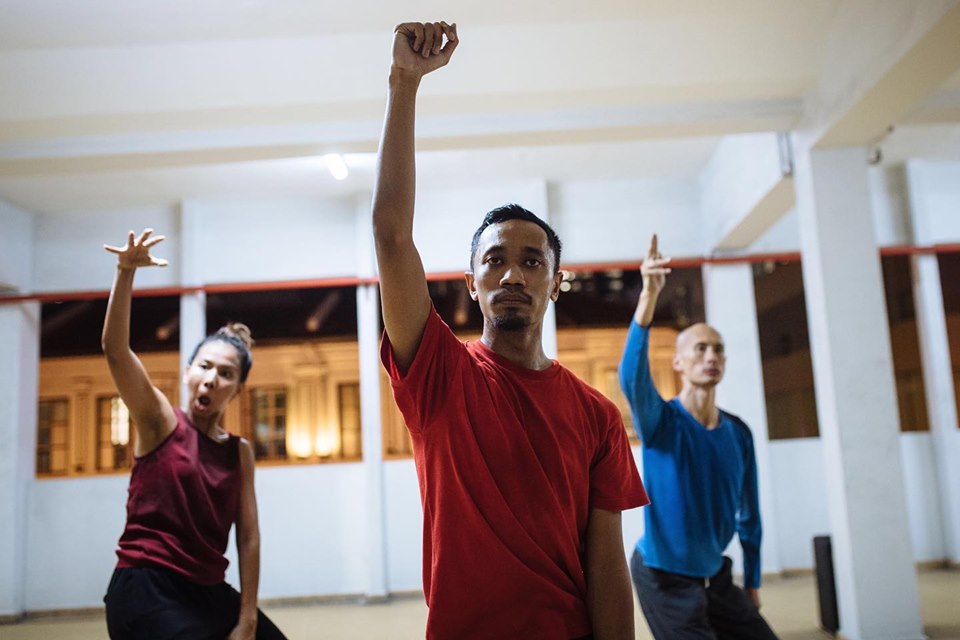 By placing the entire performance within Hong Lim Complex, one interprets the conflict at the heart of it as that of the many paradoxes and conflicts that the building itself contains. One thinks of how this place has somehow withstood the test of time, a place whose own identity is in a state of flux as we walk amidst its maze-like walls, a concrete wonderland, with surprising structures, businesses and images that await us on every corner one would never expect to find in here. This is a place where time and space themselves seem to collapse, a place of many faces, home to youths and seniors, housing both the new and the old, the modern and the vintage. As much as these various characteristics may seem to clash at first, in fact, almost at odds with each other, what we must ultimately understand is that the solution is not for one to eviscerate the other, but, like the ending of Complexnya, to find a way of fitting everything and everyone into this one space, coming together and making peace with our individual differences as one complex society.

Complexnya runs from 28th May to 2nd June 2019 at Hong Lim Complex (meet outside Chinatown Point KFC). Tickets are sold out.

0 comments on “Review: Complexnya by Dance In Situ x P7:1SMA”