As the first Asian woman to ever win a Tony Award after originating the role of Kim in Miss Saigon, and the singing voice of not one but two Disney princesses, musical theatre icon Lea Salonga needs no introduction. While she most recently starred on Broadway in the Tony Award-winning revival of Once on This Island, Salonga is no stranger to performing in Singapore, having appeared in shows such as God of Carnage (2012) alongside local actor Adrian Pang and presented by the Singapore Repertory Theatre (SRT).

Now, SRT is set to reunite her with Singapore once again, as Salonga headlines the cast of a brand new production of Stephen Sondheim’s Sweeney Todd: The Demon Barber of Fleet Street. 40 years on from its original Broadway premiere in 1979, this production will mark the first time Sweeney Todd will ever be staged in Singapore, certainly a treat for any Sondheim fans or those interested in a little bloody ‘musical thriller’. 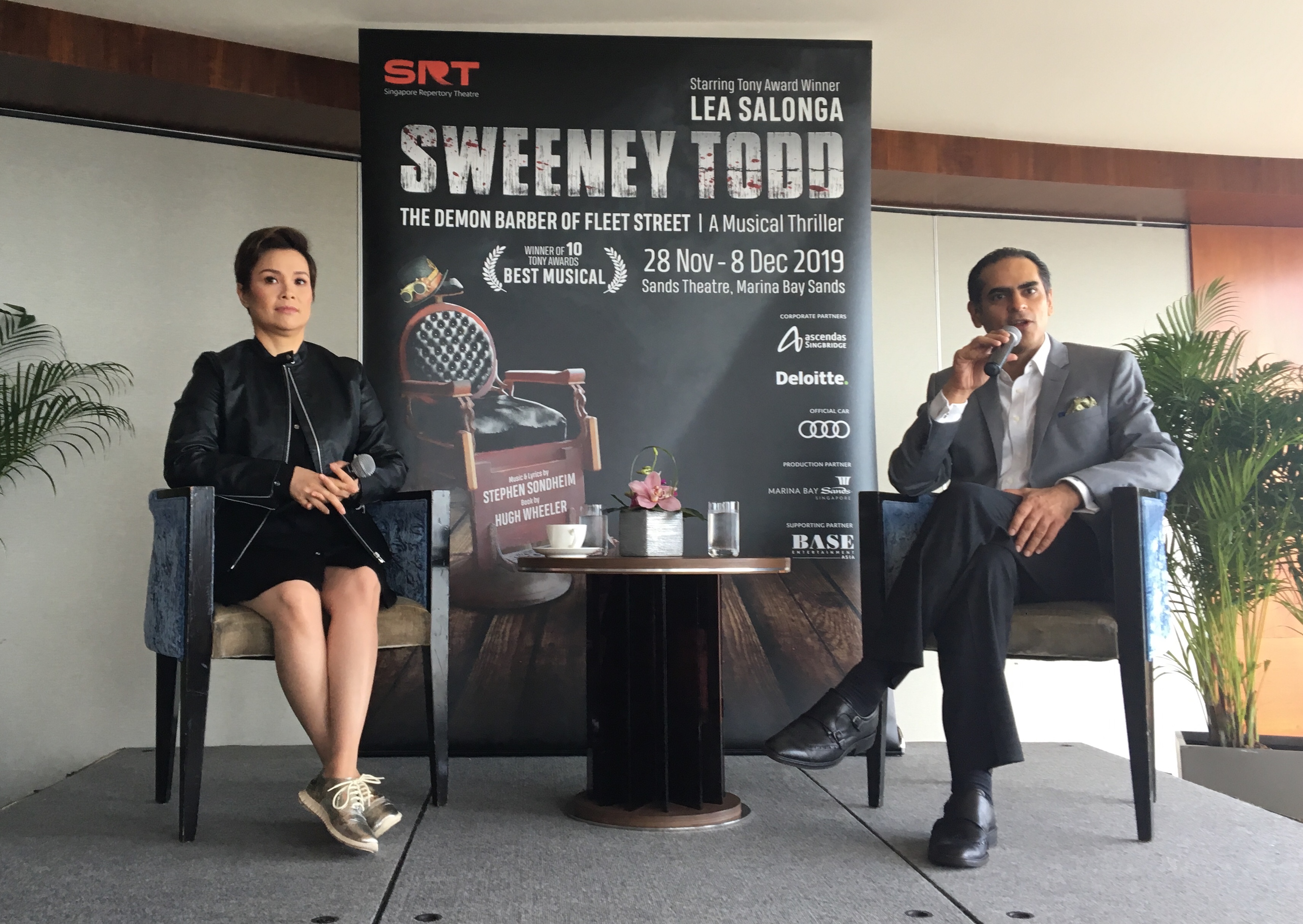 Based off an 1846 penny dreadful, Sweeney Todd follows the titular ‘demon barber of Fleet Street’ as he returns from exile to seek vengeance against the lecherous Judge Turpin, responsible for framing Sweeney in the first place. The road to revenge leads him to Mrs. Lovett, a resourceful proprietress of a failing pie shop who falls head over heels for the vengeful barber. Things get gory when Todd’s thirst for blood inspires the integration of a brand new ingredient into her meat pies that has the people lining up for seconds, as revenge is carried out one cut at a time.

While Mrs Lovett has been played by stars from Angela Lansbury to Patti LuPone to Imelda Staunton, Lea Salonga is more than ready to take on the iconic role and get started on rehearsals, expressing her adoration for the cast and the creative team she will be working with, including prolific theatre director Bobby Garcia, scenic designer David Gallo, lighting designer David Weiner and costume designer Rajo Laurel. Sweeney Todd himself will be played by Jett Pangan, frontman of prolific Filipino rock band The Dawn. “Getting to know the cast over the last couple of weeks,” she says. “It was like Christmas had come, and we’re very excited to get started. Bobby has gathered people from all over, from opera, musical theatre and even someone with a rock music background. They’re all people who’ve proven their vocal quality and resilience, and their storytelling skills in previous productions. I’ve seen so many of them in action before, and I can tell you these are all stellar human beings and incredible actors. Audiences are in for a treat, and in rehearsals, my ears are just gonna be so happy.” 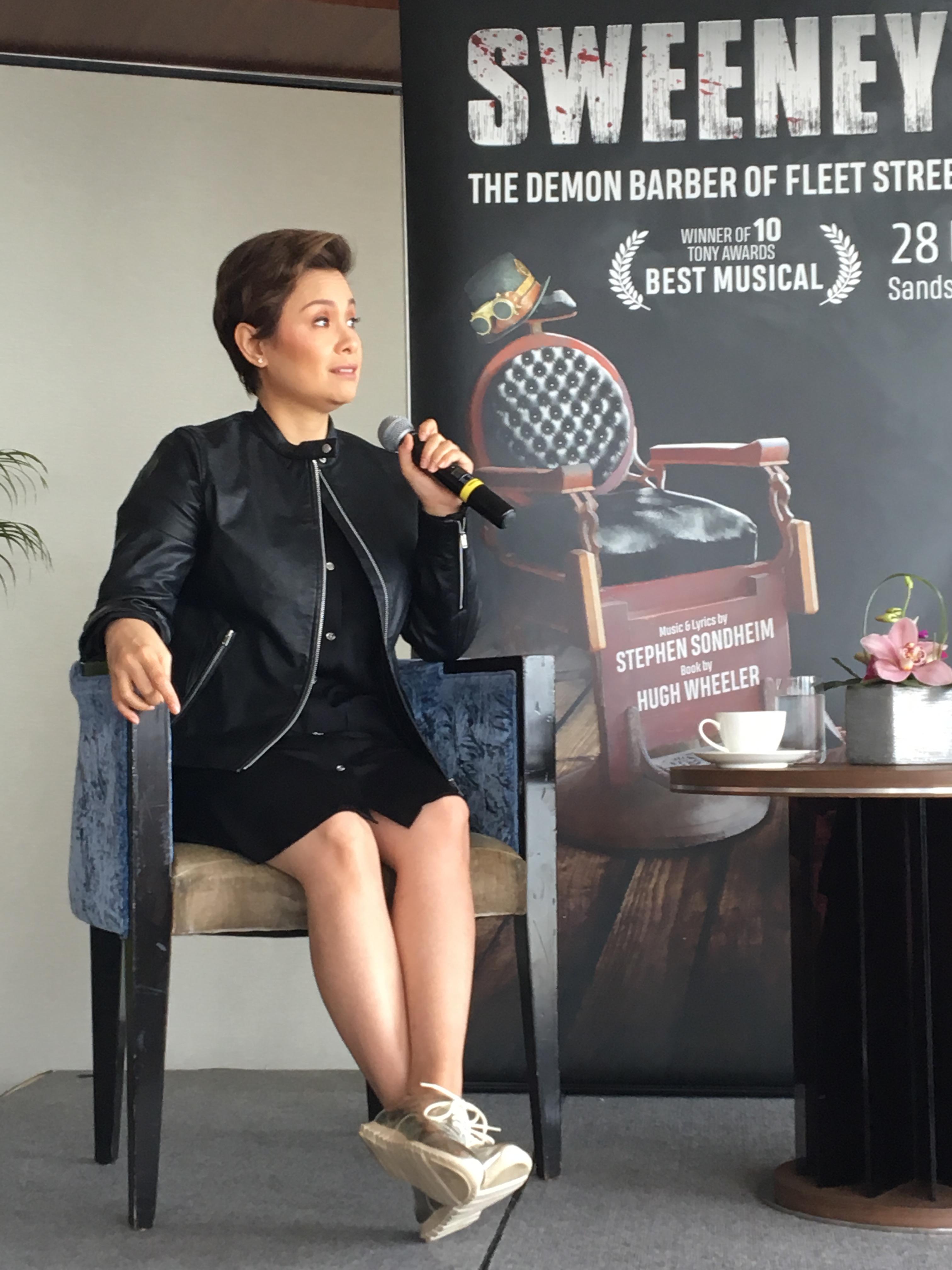 Sondheim is notorious for complicated soundtracks and lyrics, having composed for shows such as West Side Story, Gypsy, and A Little Night Music. Lea however, being the veteran that she is, is more than up for the challenge, and has even covered a number of Sweeney Todd songs over the years during concerts. Not to mention, the first musical she ever did with SRT was actually Sondheim’s Into The Woods, way back in 1994. Says Lea: “Sondheim is known for having so many different changes in time signatures and wordplay, but the thing is, as one of my friends told me before, once you get it, he never leaves you. It’s all about understanding the patterns in the wordplay and rhyming, and all of a sudden, it’s like there’s this very clear path you see that helps you navigate his shows.”

“When I sang Send In The Clowns,” she adds. “Even though it seems like such a simple melody and simple lyrics, the moment you start singing you just feel this flood of emotions, as if Sondheim has this tap that goes from your brain to your heart and out of your mouth, and the next thing you know, you’re just overcome with emotion. I don’t know how he does it, but it’s just crazy amazing. Once it’s in the body, his songs feel organic, and it’s just so fulfilling to do one of his musicals.” 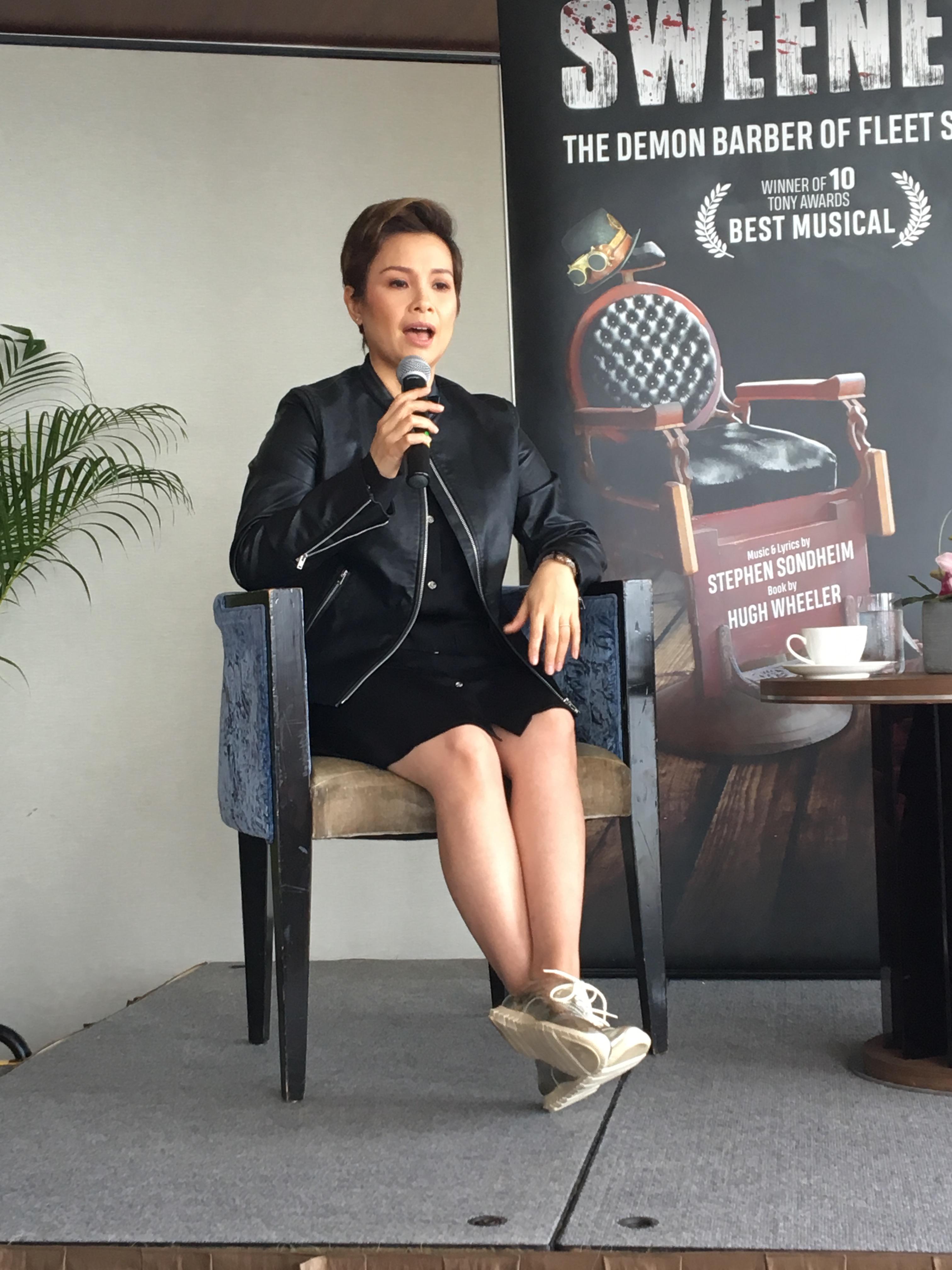 Over the years, Sweeney Todd has seen success in all forms, from winning Best Musical at both the Tony Awards and Olivier Awards when it premiered on Broadway and West End, receiving a film adaptation directed by Tim Burton in 2007, and even a critically-acclaimed production set in an actual pie shop by Tooting Arts Club. On its enduring quality and continuous revival, Salonga says: “I’ve seen Sweeney Todd maybe two or three times in various places. Each time, it’s not the grisliness that hits me, but how powerful people can just move about in the world with such impunity, and how people are unjustly accused and removed to fulfil the desires of someone else. There’s just so many bits and pieces of Sweeney Todd that never get old, it’s still so timely and current because it’s about human nature, and how dark it can be.”

“I like to think that Singaporean audiences are very hip, and because Sondheim is so urbane, they’ll be very responsive to his clever wordplay,” she continues. “I’m honestly surprised that it’s the first time it’s showing in Singapore, and I think they’ll be affected by both the humanity and the inhumanity of the piece. People are going to empathise with both Sweeney and Mrs Lovett, and how the judge is the one who’s actually evil. I think a lot about how people in the US who’ve been wrongly accused or subject to police brutality, and how people will relate that to the ideas of people in power trying to quash and silence those beneath them, and you end up being able to justify everything both Sweeney and Mrs Lovett do. It’s one of those musicals you can, pardon the pun, really sink your teeth into, and when you get into the heart of it, you just realise my god, human beings really can be so heinous at times!” 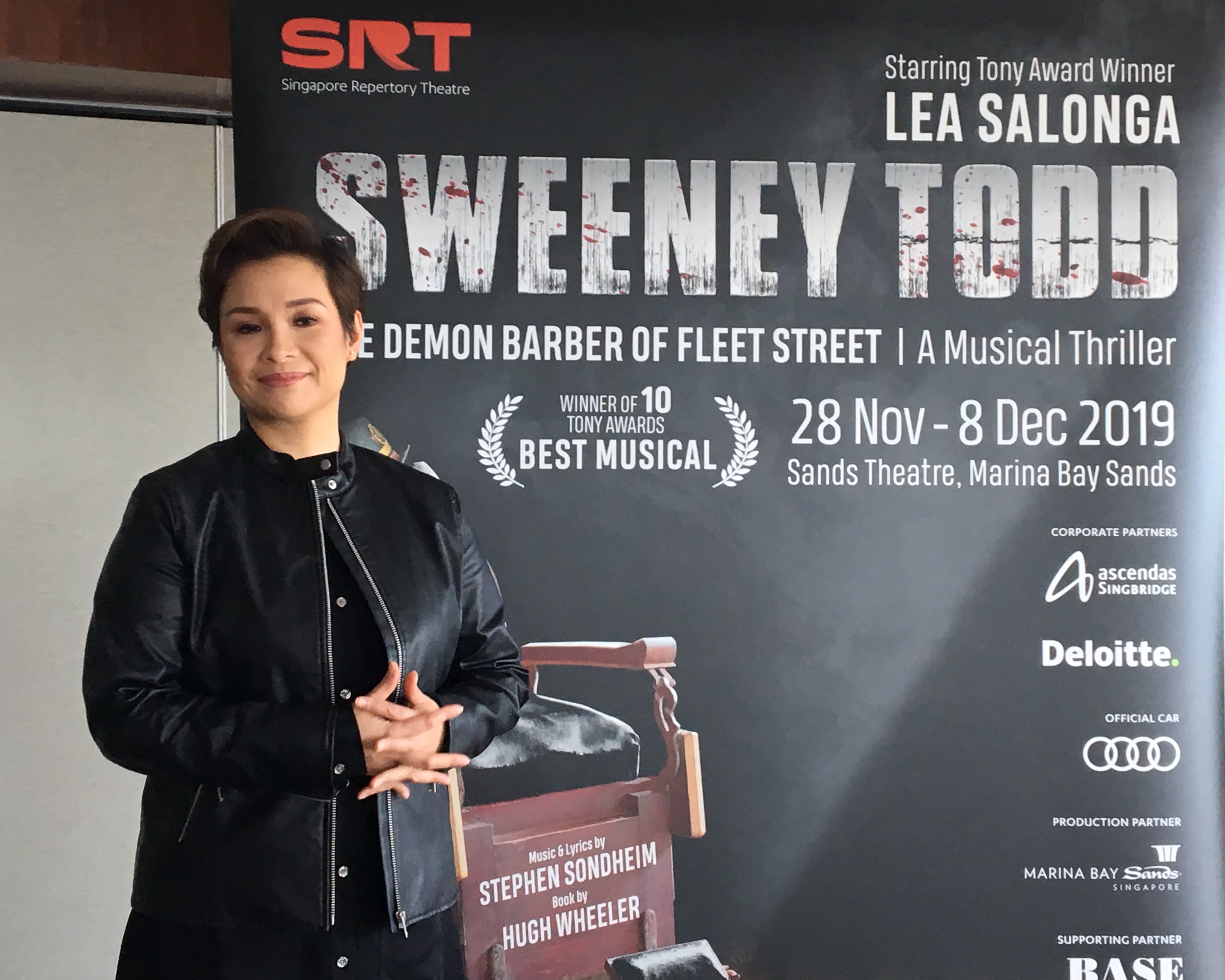 Fans of Salonga may remember that she was initially slated for a concert this February, but had to cancel due to a broken tibia sustained during a ski trip. Thankfully, Salonga reassures us that she is recovering well, and that she’ll even be making up for the cancellation with a rescheduled performance in March 2020. Says Salonga: “Not everyone will see it that way, but actually, this was kind of a blessing in disguise. During my recovery, I just stopped everything, from working to singing, so that gave me time to heal and just stop to appreciate my work and friends. People came to visit my (and make fun of my leg), and I spent more time with my family, to be home when my daughter came home from school, and just to be present in life, not having to stress so much about travelling and performing.”

“Of course,” she adds. “I was so happy once I actually got back to working again, and felt really grateful that what I do for a living really is something I love to do. Sometimes, it just takes a break to realise and remember and appreciate that.” 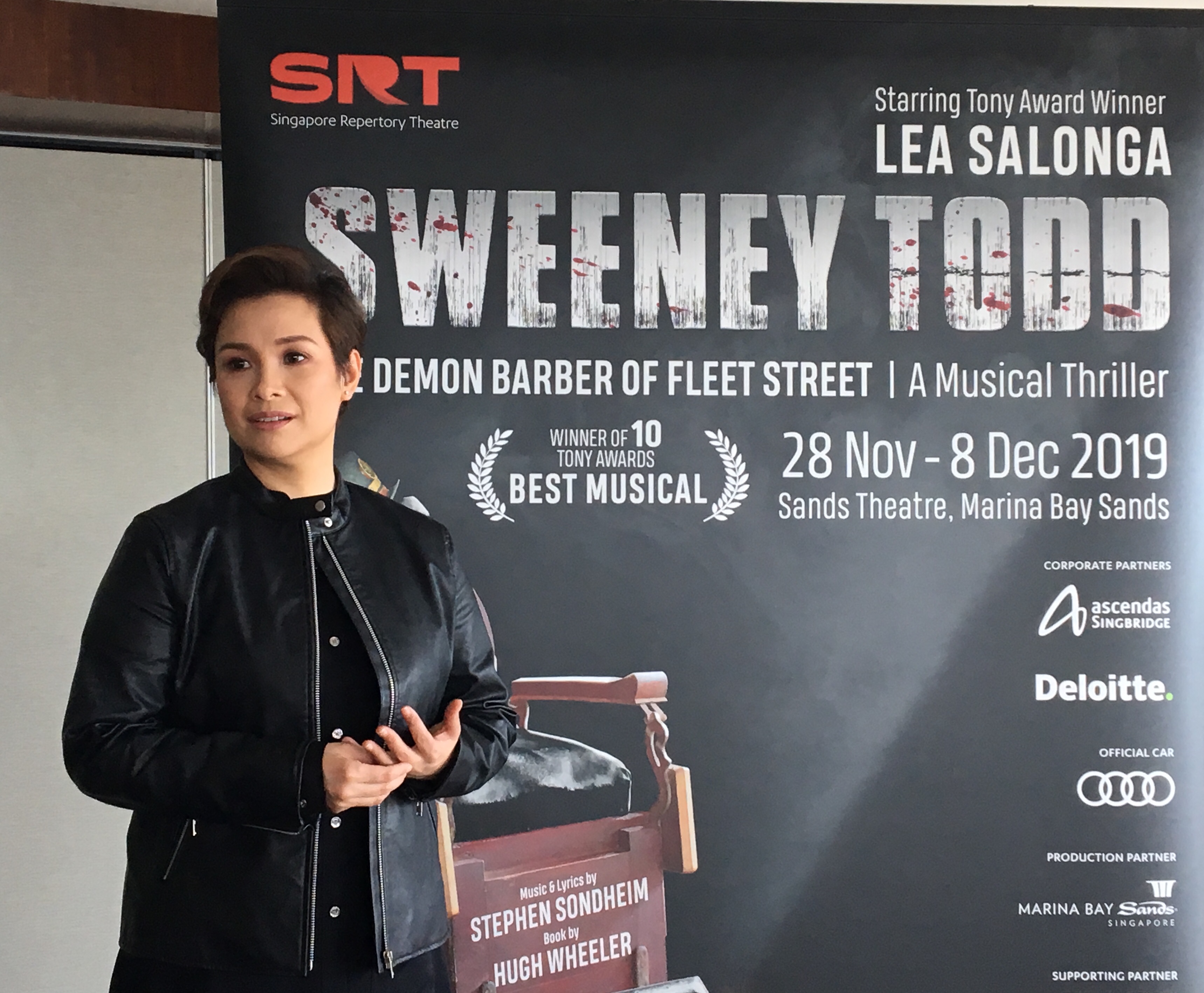 “Part of the fun of getting older is actually how I now get offered parts like Mrs Lovett,” says Salonga. “I’m 48 years old now, and I’m at the point in my life where I think I really understand the character and the show, and can now play the role with authenticity, and truth and honesty. Shows seem to come into my life just when they’re supposed to, and I like to think that when something bigger than you decides something is going to happen, the forces of this entire world and beyond will see that it does, and that’s how and why Sweeney Todd is finally happening.”