As one of the founding fathers of modern absurdist theatre, the works of British playwright Samuel Beckett have been celebrated over the years, adapted in one form or another. This July, local art collective Grain Performance & Research Lab present the latest iteration of one such adaptation, bringing to stage not one but two of his plays in Happy Waiting – a brand new play by Beverly Yuen that takes inspiration from Beckett’s Happy Days and Waiting for Godot. 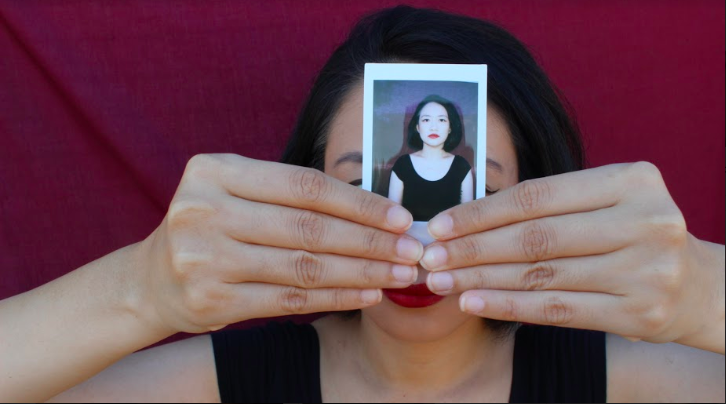 On the concept behind the work, Beverly explains: “I was inspired a lot by the idea of waiting. Most of my inspiration of course, comes from Beckett,  draw references to both Waiting For Godot and Happy Days. I thought about how often, we do such routine things in life and a lot of our life revolves around the notion of waiting, and psycho-ing ourselves to stay happy all the time. I’m also trying to make my work connect better with Singaporeans, and hoping that they’ll be able to identify with it.”

She adds: “For my style, I start with the imagery. If you see the key visual of the work, there’s red heels, her legs coming out of the mound of sand, and there’s already a story told from the images. I put myself in a box, played with my own legs, and tried to experience what it was like to be trapped like that, and figure out how to express myself given that limited space, still with passion and freedom.”

The plot of Happy Waiting concerns itself with Vicky (Intercultural Theatre Institute alumnus Sonia Kwek) finds herself trapped in a mound. But contrary to how you think she might react, she remains cheerful, and begins to recall memories of the stories told by her folks when she was young, happier days left in the past. While she waits, she gets visits from Bobo (Neo Yan Zong) who dances past her frequently but does not seem to respond to her.

Directed by dance artist/choreographer Bernice Lee in her directorial debut, Bernice does not feel that her lack of formal director training will hamper her helming the work, instead seeing things from a choreographer’s standpoint. Says Bernice: “I think of it more as choreography rather than directing, and especially because to me, Beckett is all about rhythm, and as a person who’s very dance-oriented, think I can translate that to stage via movement.” 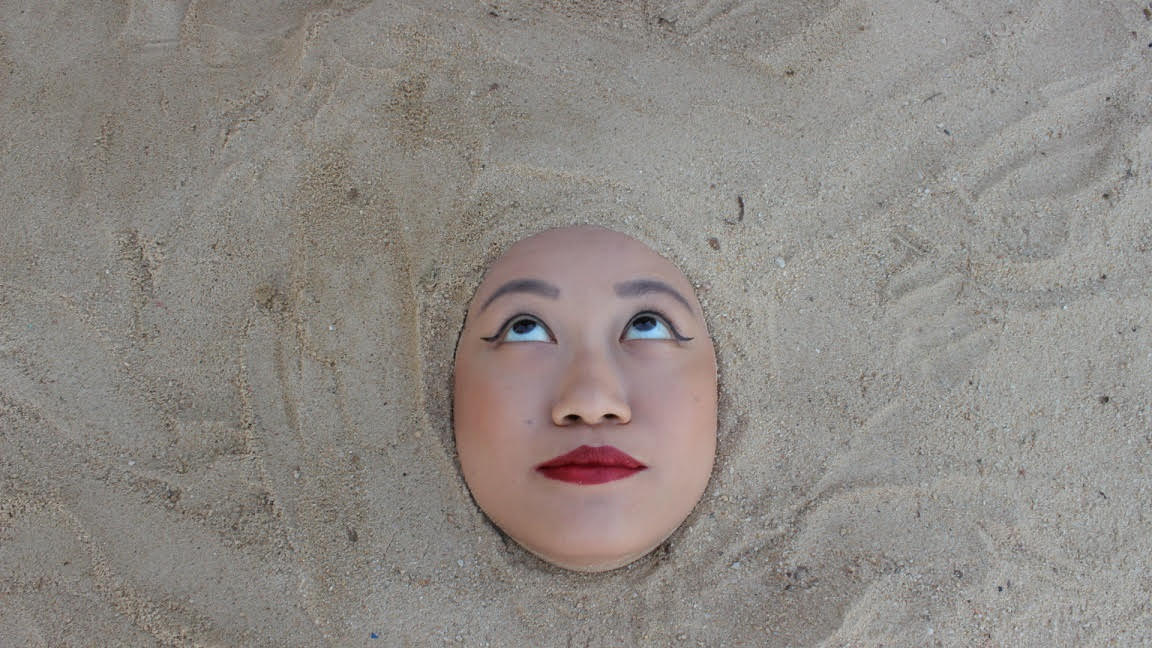 She adds: “I’m interested in what my performers and Beverly bring to the table. For Sonia especially, she’s someone who’s quite comfortable with both movement and text, and she brings this staunchly feminist world view to a work that focuses on the female performer. It helps that she was also very struck by Beckett’s themes of mortality and depression. Not to mention, Sonia was trained at ITI, so she contributes a lot of skill and perspective. On our end then, we’re shaping the direction, be it vocal projection or the emotional treatment of the characters. Meanwhile, I chose Yan Zong because we can tap on shared movement interests and dance vocabularies, and he’s very open to ideas and conversing about them. A lot of my style then uses such conversations we have in real life, and see how we then mange to connect it to the play.”

On Beverly’s writing, Bernice comments: “Compared to Beckett’s original works, Beverly’s script is a little more linear and easier to follow now. The feelings of being happy and feeling trapped are both familiar one, and it’s easy to build up those layers with this play. I didn’t want to clearly demarcate that oh, this is going to be the dancing part, this is going to be the acting part.” 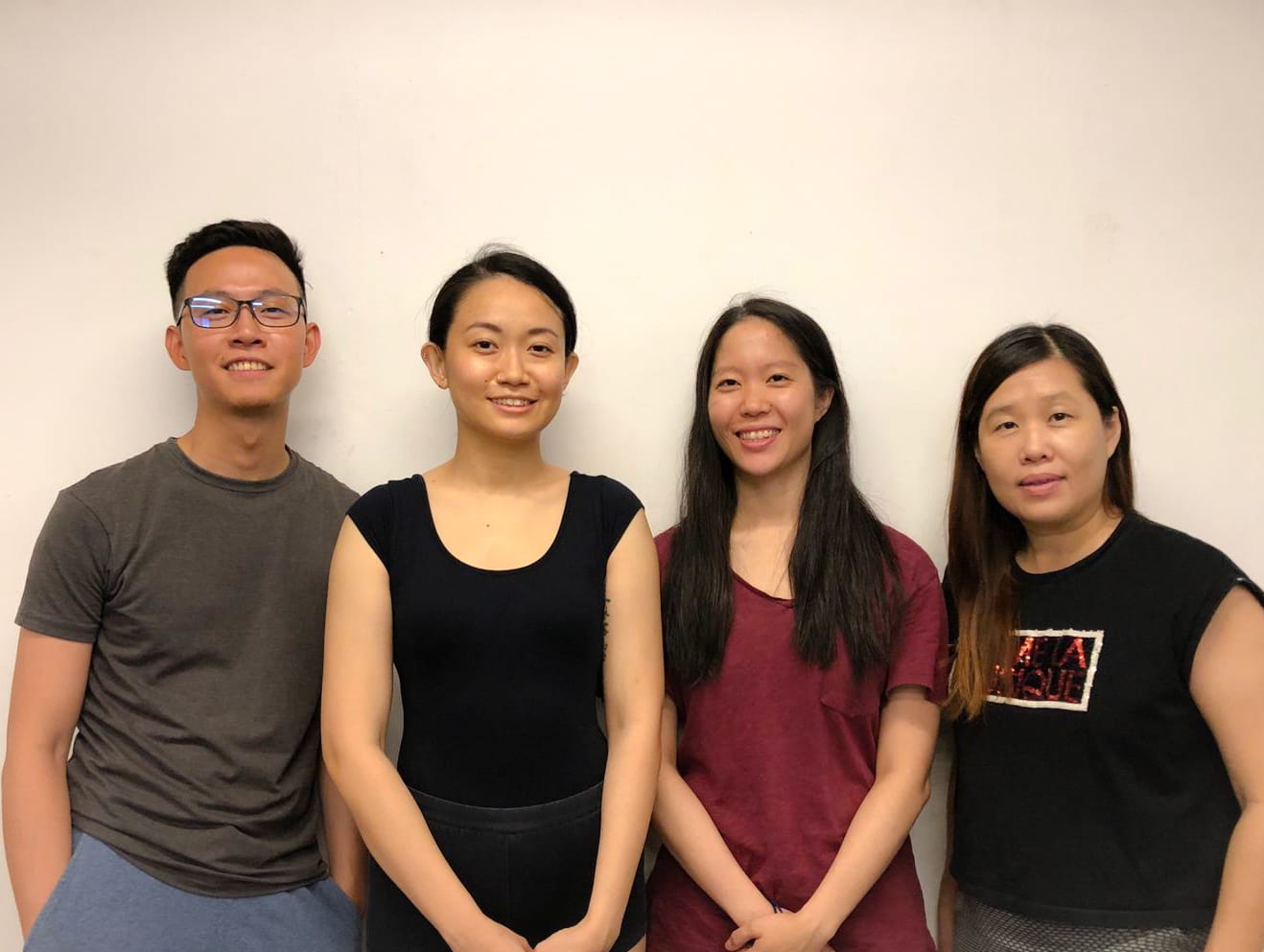 Bernice concludes: “Honestly, this play is about making the most of a situation, and figuring out do we get out of it or do we stay in it? Maybe it applies to  a bad romance or a workplace situation, or even the country you’re living in. Either way though, you see that Vicky is happy, and it’s about deciding for yourself whether she’s deluding herself into that, or truly is the most blessed person on Earth.”