One of my earliest memories of coming into contact with local theatre is picking up a copy of Fat Virgins, Fast Cars and Asian Values in the late 2000s, collecting some of the Theatreworks Writers’ Lab’s most seminal plays from the 1990s. Naturally, as its title suggests, this collection contained Ovidia Yu’s Three Fat Virgins Unassembled, a script that hooked me from its opening lines, continuing to enchant and entrance with its simultaneously laugh out loud funny and depressingly real sketches of women marginalised and abused by society.

So to get a chance to see this play staged was certainly a highlight I was more than looking forward to this July, with a new staging by director Grace Kalaiselvi, playing as part of Theatreworks’ brand new N.O.W. public project. While certain lines and references have been updated for present day, Ovidia Yu’s script has remained largely unchanged from the original 1992 version, proving tragically how only that those same issues raised in the 90s continue to haunt the women of today. 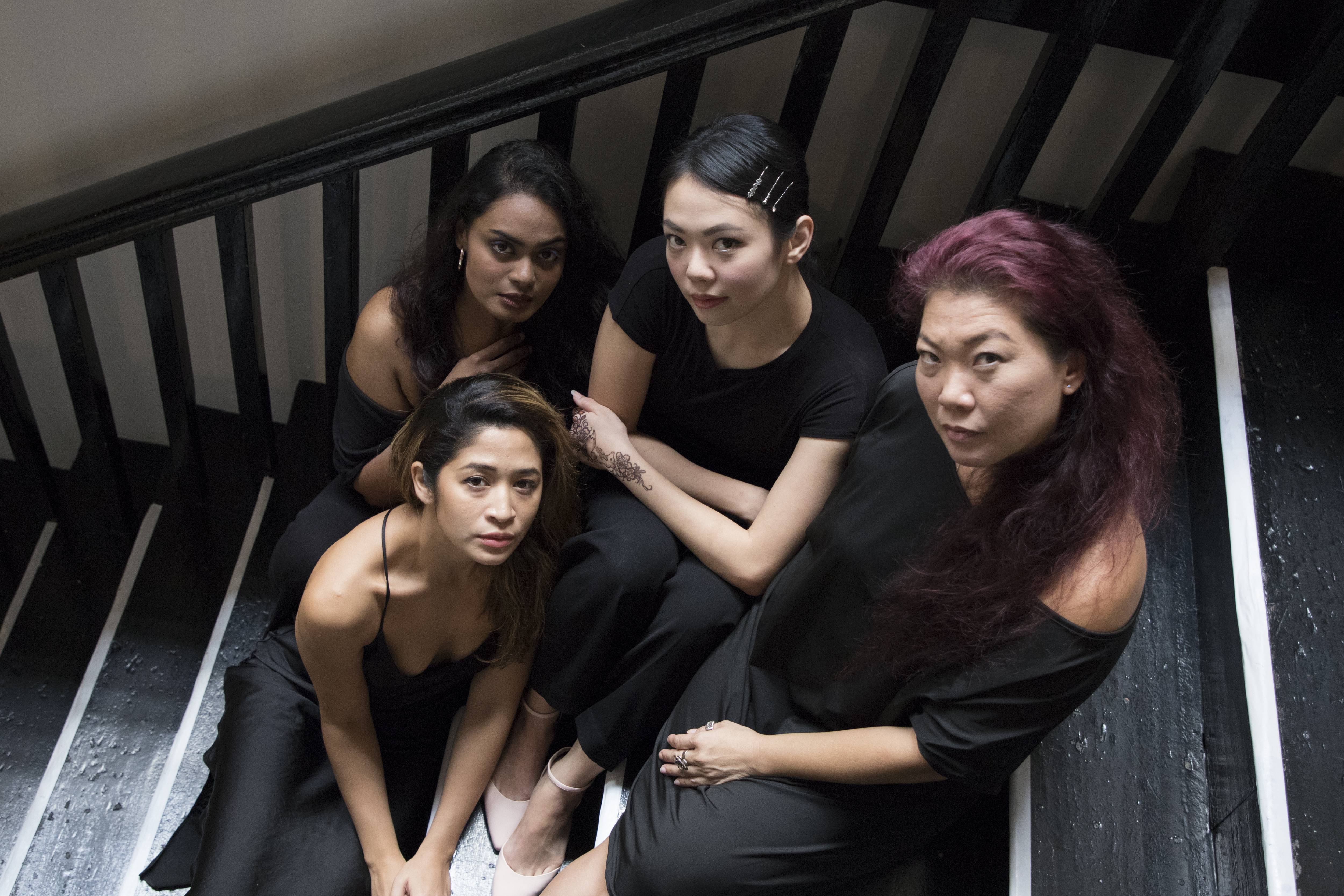 Three Fat Virgins Unassembled, in short, loosely follows three women (Zelda Tatiana Ng, , Munah Bagharib and Chanel Chan) as they meet one day and talk about their lives. Narrated and framed by Rebekah Sangeetha Dorai, the play delves into a tragicomic, documentary-like examination of what it means to be a woman today, showcasing a spectrum of struggles across society that serve to highlight the ever-pressing need for greater gender equality.

We open on a sparsely decorated set by Bernice Ong, minimally furnished and cold, with plenty of empty space and a white, circular projection screen uncomfortably, ominously hanging overhead (this is only emphasised more when images of a cratered moon or a blinking eye are screened). One thinks almost of a stark, nuclear winter devoid of life, as the sound (designed by Inch Chua) of low, somber drumbeats fills the air, funereal in mood with long, giant shadows cast by the various actors upon the wall. We see the ‘three fat virgins’ in various states of rest around the stage, each dressed plainly in dull pink tops and black pants, allowing us to easily imagine them as any of the many characters they end up playing. Rebekah Sangeetha Dorai then enters, dressed in a corporate suit and a crop-haired wig, authoritative and confident as she opens the play. 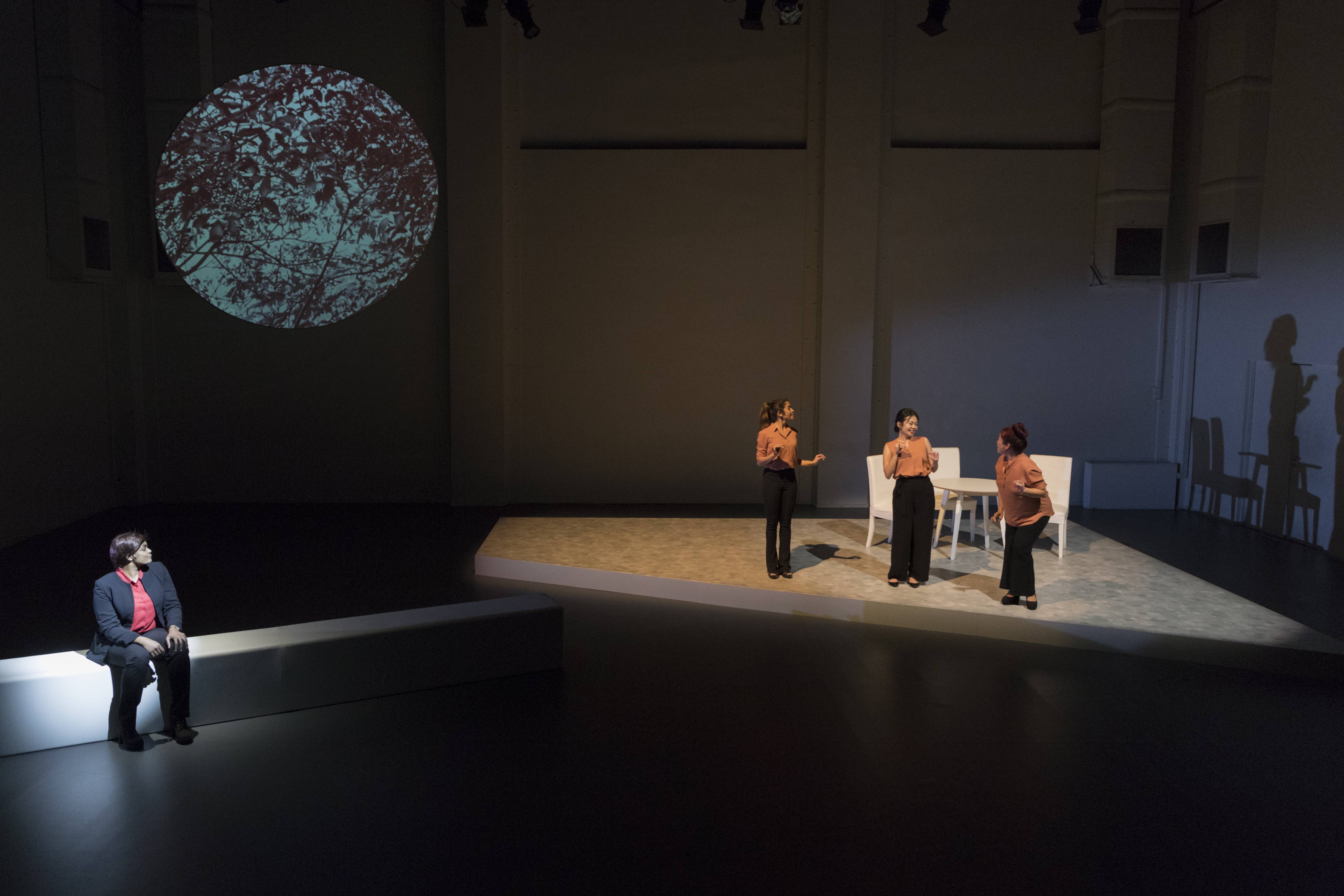 The strength and timelessness of Ovidia Yu’s language makes Three Fat Virgins Unassembled a riveting watch from start to end. Filled with recurring motifs and rich symbolism, one thinks of the coded language by which we have embedded into society, hiding unfettered rage behind cordial language. In this play, no high tea is simply a high tea – beneath the otherwise benign activity lies a cesspool of unaddressed issues, brought to light under the guise of laughter and casual conversation, and easily segueing from the past into unresolved traumas of the past. The more closely one watches this show, the more cracks it hammers at the existing flaws in society.

Three Fat Virgins Unassembled’s greatest strength then lies in how it is uproariously funny, teasing out hard truths and disguising them behind dark humour as we laugh before feeling a dull, emotional ache in our chest. From a mother admonishing her daughter going overboard in a primary school science project, to a perverted boss whose perceived inclusivity ends up becoming sexual harassment, these are all characters we know of or have encountered in real life at some point. It helps that the cast has such strong onstage chemistry as well, playing off each other naturally, and feeling like a gloriously bizarre team of Charlie’s Angels in group scenes with each other. 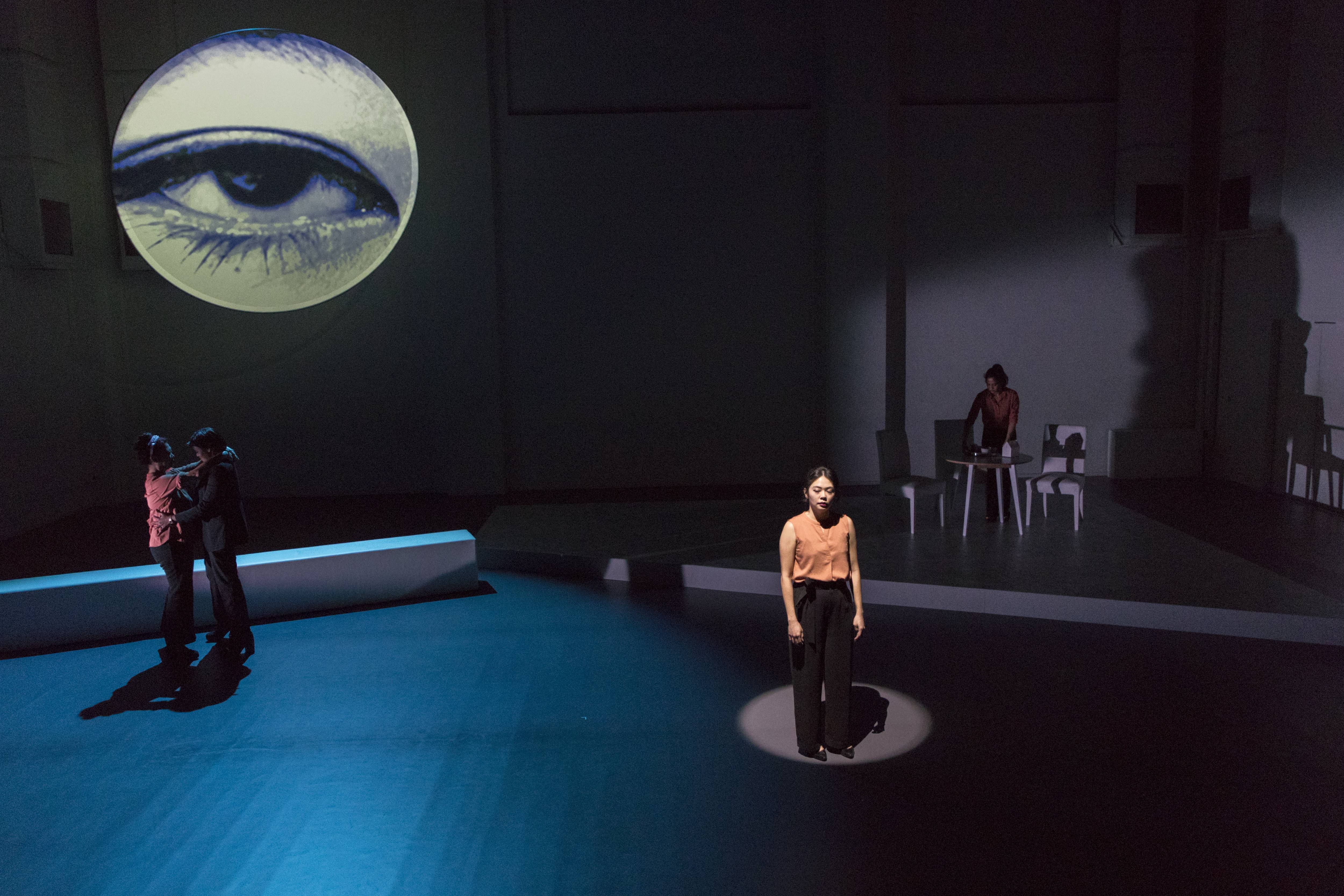 Brought to many of their exaggerated extremes, the laughter comes easy when the stereotypes are at their most ridiculous, such as Zelda Tatiana Ng’s simpering “dah-lingks” she croons while playing a mistress. Munah Bagharib, on the other hand, has turned in one of her strongest stage performances to date, proving her as a potential force to be reckoned with in the theatre scene, from her innocent, unabashed portrayal of a young girl wanting to grow up to be a “slut”, to a frustrated young office lady, always on her guard.

Of the cast though, it is Rebekah Sangeetha Dorai’s chameleon-like ability to play multiple characters that impresses us the most, from playing a suspicious Indian night security guard at Fort Canning, to a haughty theatre director amalgamated from multiple familiar figures in the scene. Most memorable is when she takes on the role of a modern Aunt Agony, answering queries on Reddit and Quora that escalate from the absurd (cucumbers as dildos) to the downright tragic and unanswerable, when it comes to women trapped in impossible family situations. It is here that Rebekah displays her dramatic prowess, as she takes us on a journey, watching her character go from brazenly confident, to complete powerlessness when she finds herself at a loss for words. 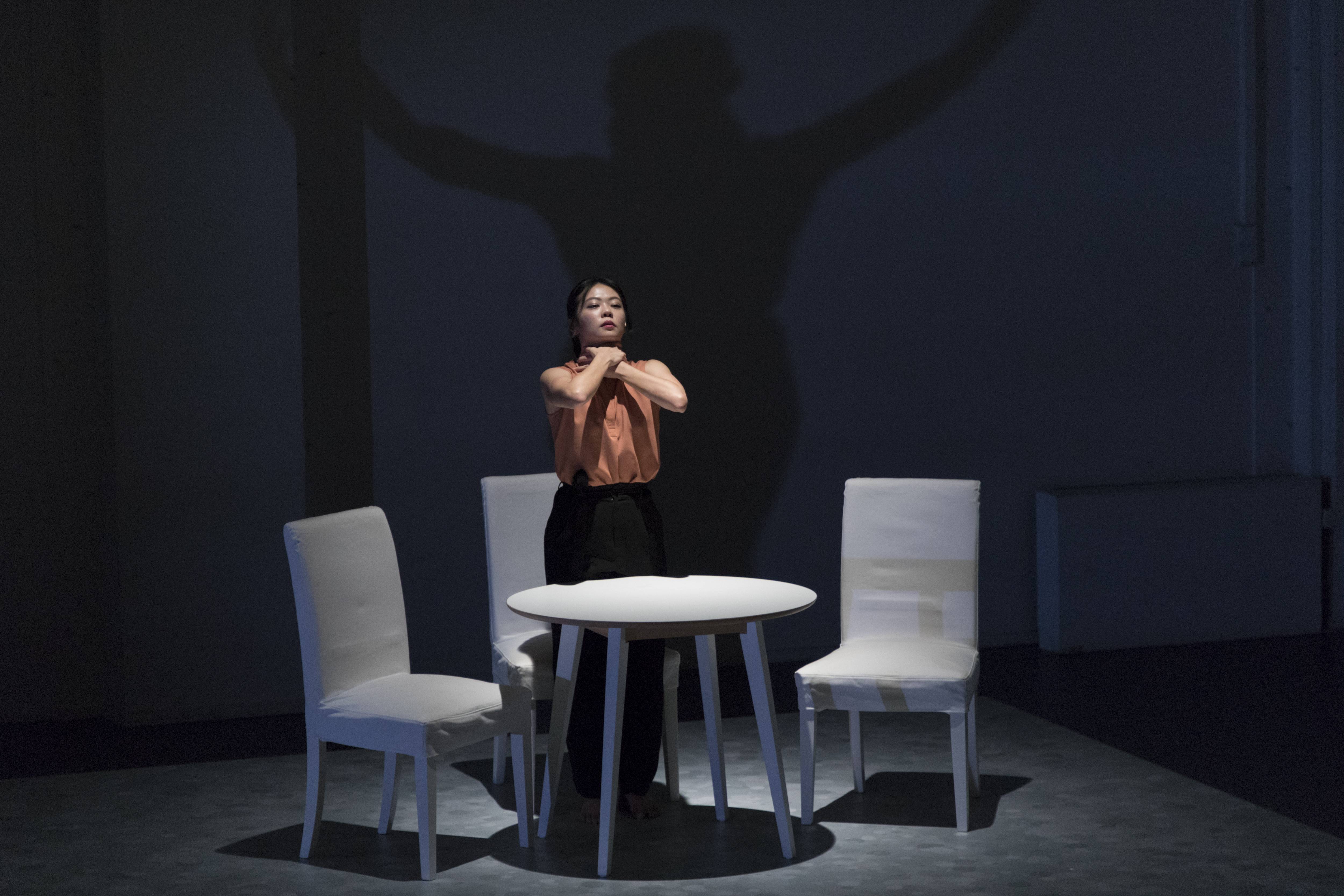 What director Grace does so well in this staging is in how she manages to clearly bring out each of the three women’s underlying storylines, allowing audiences to develop bonds and emotional connections with each one, elevating Three Fat Virgins Unassembled from sketch comedy to devastating documentary. Particularly for Chanel Chan, whose story arc only gets increasingly distressing as the play goes on, her twist ending differing from the original script still feels completely appropriate given the sympathetic treatment of the character. Even single scene characters are given sufficient space to develop, such as Zelda Tatiana Ng’s schoolteacher wanting to “broaden her horizons” in the arts, evoking sympathy from the audience as we watch her hopeful optimism taken advantage of, and cheering her on as she rebels against her oppressor.

Perhaps though, the most terrifying thing about Three Fat Virgins Unassembled is how even when as a group, there is an unquestionable loneliness that characterises every scene, with each character often finding themselves in isolation or with few allies or people to turn to in their greatest times of need. It is clear then that women, be they in the play or in real life, require all the solidarity and support they need, evident from how towards the finale, Rebekah sings an original song while we see the names of iconic women across history projected onscreen. Darkness and discrimination against women continues to cloud our society, even almost 30 years on from the original staging, and it is all we can do to stand together and keep fighting the good fight, and bring society to a brave new world for all women to live safely, confidently, and proudly.