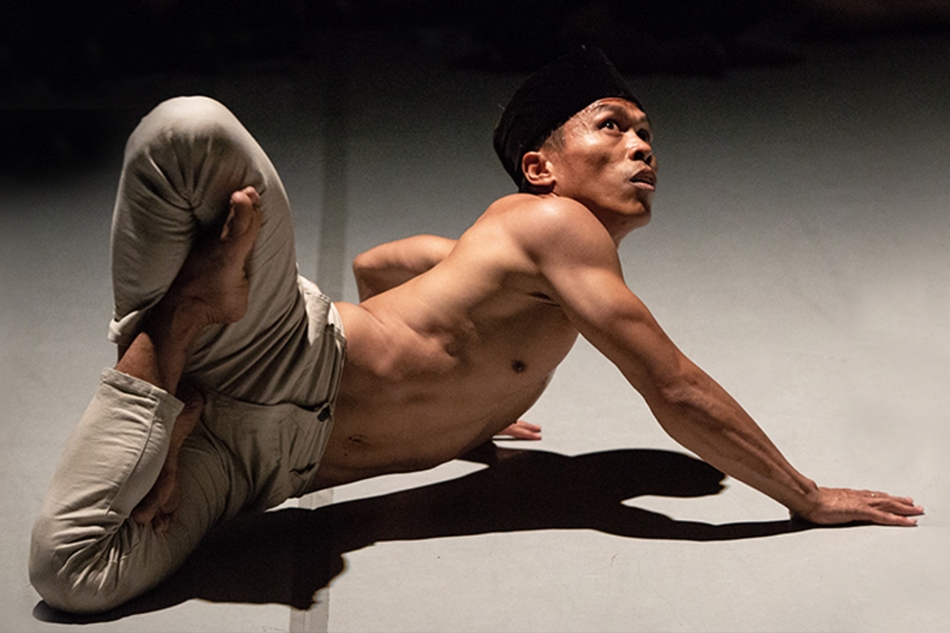 Strong potential evident in each of these works-in-progress

Created as a platform to showcase new works-in-progress from local and regional dance artists, the M1 Contact Dance Festival 2019’s Off Stage presented four draft pieces at T.H.E Dance Company’s studio at Goodman Arts Centre. Inviting both members of the public and local/international dancers and choreographers, Off Stage not only gave audience members a chance to preview these works before being professionally staged, but also to be a part of the process through feedback and suggestions, integral to each choreographer’s creation process. 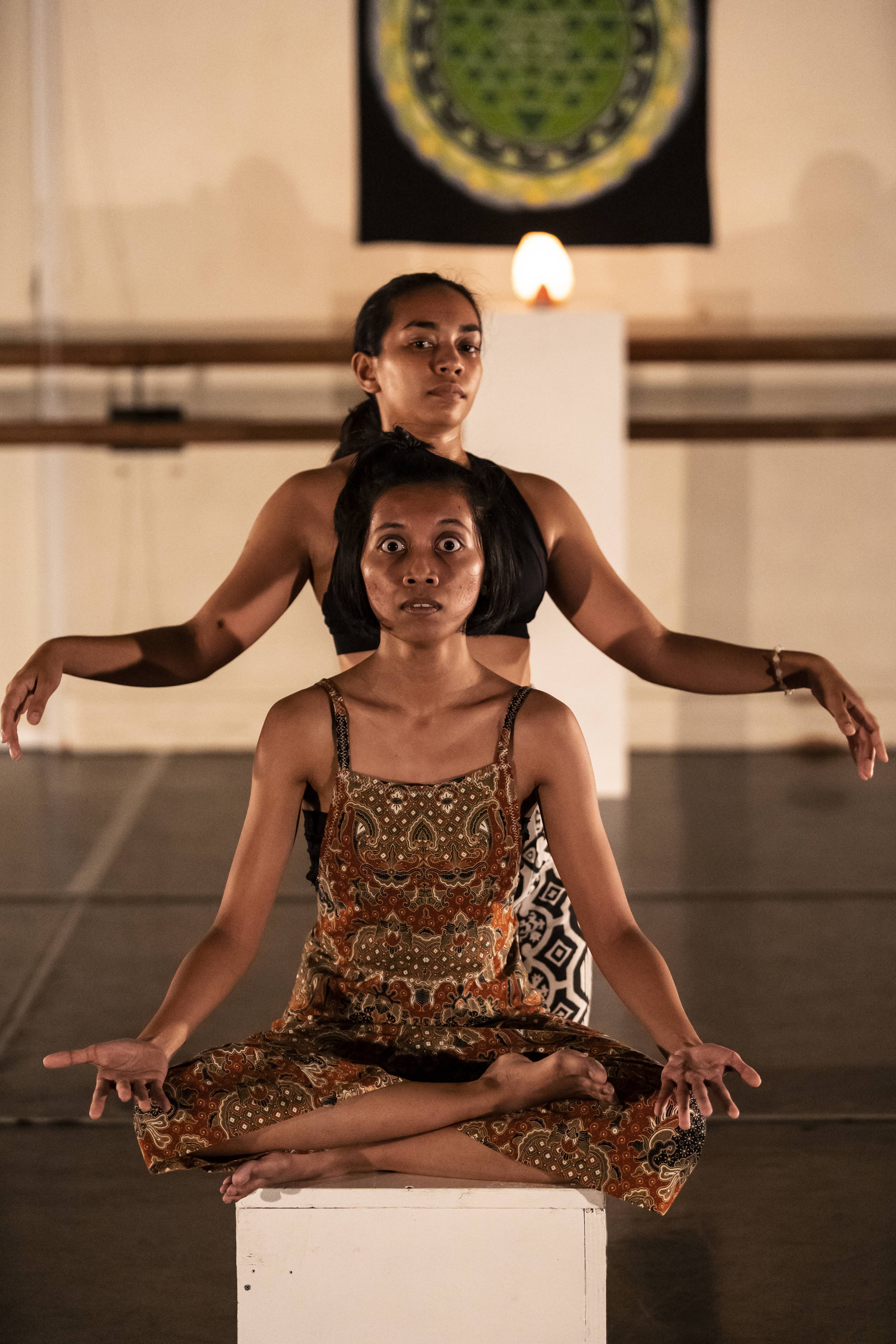 Even before entering the studio, the performance, in a sense, had already begun when we smelled the aroma of incense burning outside, set up on a small altar. Drawing us into her world of mysticism with smell, we started the evening with local choreographer Zunnur Zhafirah’s Luna(s), a meditative work on looking inward and the power of soul gazing. Much like the use of the incense, there is plenty of symbolism and ritual involved in the set-up of Luna(s) – we see a mandala set up at the back of the studio, illuminated by the light from a salt lamp. Dancer Chloe Chotrani stands in front of it, staring, while Lyn Hanis sits in front on a platform, her legs crossed and arms poised in a meditative position, while layers of batik cloth are thrown on, almost giving the illusion that she is levitation.

As the performance begins, Chloe moves frenetically at the back, while Lyn remains still, only her hands and fingers moving, as if entering some kind of trance. Reaching some kind of awakening, Lyn stands, and it is as if we’re watching a completely different side to both dancers as they channel some form of spiritual energy in each and every one of their movements. Accessing the animalistic sides of themselves, there is a cat-like energy about them as they move about the stage, sleek and sensual, with emphasis on hip movements and an almost liquid way with which they extend and move their arms. At the same time, there are occasional displays of strength and ferocity, as they poise themselves to stab with an invisible knife. One thinks of this duality as an all-encompassing portrait of the female form, specifically, the brown-bodied female form, shifting between the nurturing and the violent. We sense an almost mystical energy evoked from both dancers, is certainly a force to be reckoned with, leaving us in awe of the sacred nature of this ritual, and the sheer power it has over us. 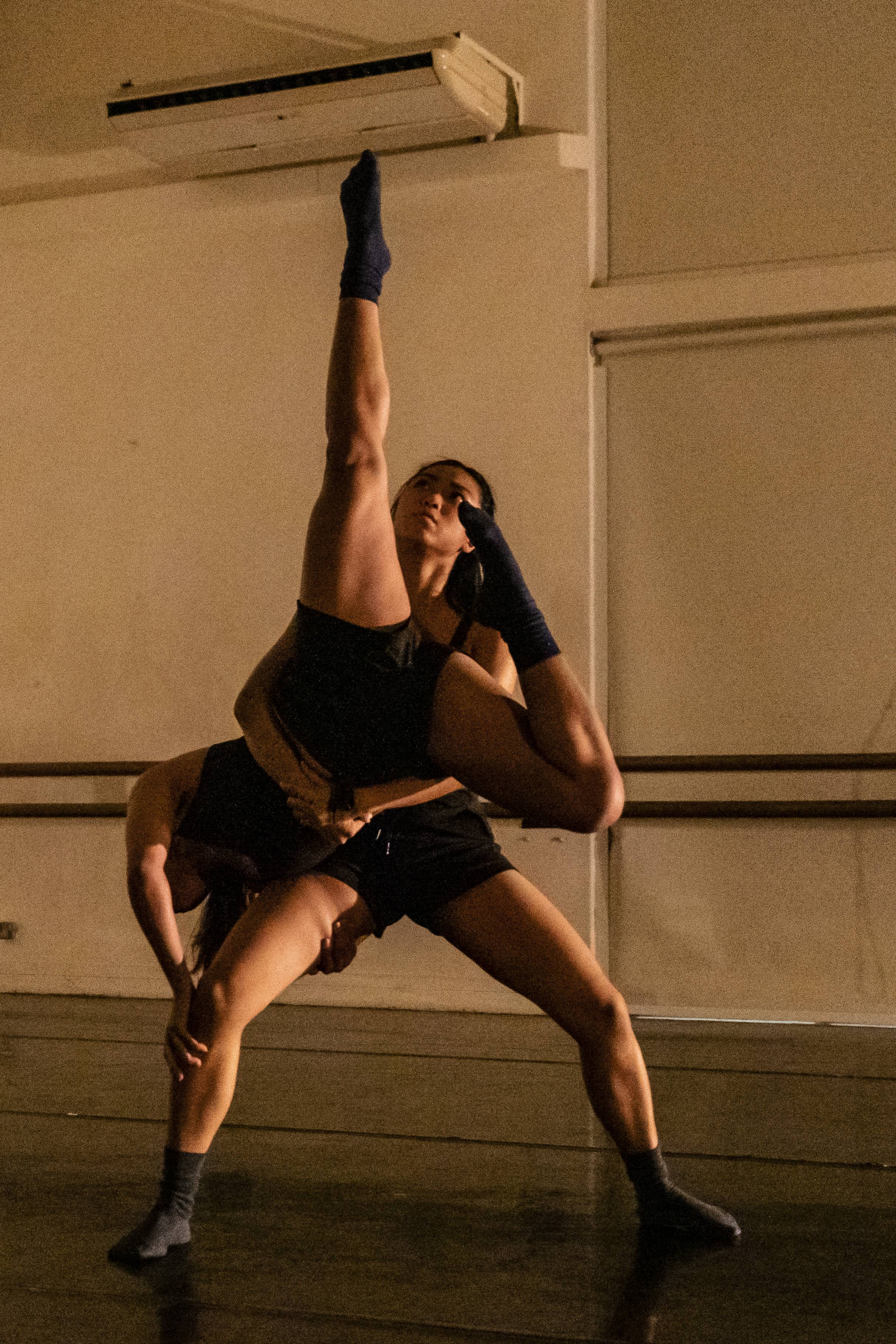 In H O M E S I C K, choreographer Michelle Lim explores themes of displacement, identity and belonging, inspired by her own experiences forced to return home due to immigration issues. The work begins in darkness, as we hear dancer Maybelle Lek marching rhythmically on the spot. Dim lights come on, and we see both Maybelle and fellow dancer Charlene Clyde, dressed in a black undergarments and black socks. There is an immediate sense of vulnerability, as they seem unarmoured, exposed to the elements. We hear the sounds of water and wind, as Maybelle begins to rotate while marching, Charlene stretching out. There is a sense of loss, of searching for some kind of ground or rootedness as they begin to navigate the space around them.

Midway through, we hear Michelle’s voice, muffled but distinct enough to make out brief words – “I was once told that walking through a doorway could cause someone to forget even the most precious memories they had.” Both Maybelle and Charlene face each other, and their actions become forceful, violent, clutching each other’s face, almost as if wrestling with each other. Instead of the idea of being sick for home, we think of a person who is sick of home, as their performance become more agitated, yet still smooth and well-executed, a mixture of ballet and more contemporary movements. The two dancers remain separate by the end of the showcase, and we cannot help but think – what traumas have happened in this onstage household to have left them with such scars, fears and confusion, as the lights fade into black. 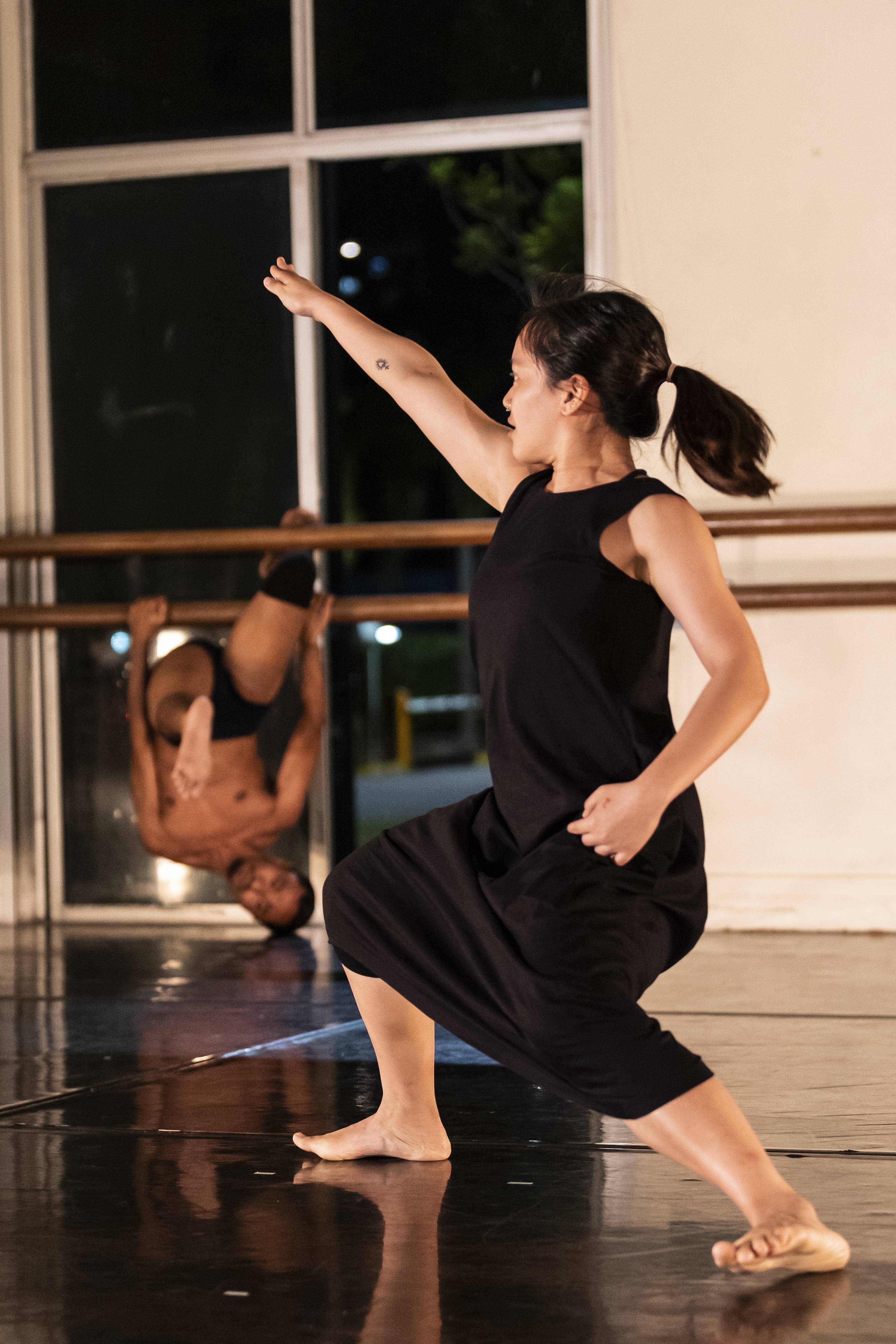 Local choreographer Syimah Sabtu then presented H A S E R, herself performing alongside Syarifuddin Sahari and Jonit On. For this performance, the studio’s doors were opened, allowing us to see into the carpark outside, and further still, cars cruising along Wilkinson Road, while the sound of airplanes flying past occasionally interrupts. Exploring themes of duality of being, only Syarifuddin and Syimah are onstage at first, both dressed only in black underwear. Syarifuddin seems relaxed, casual as he sits on the left, while Syimah, in the upper right corner, begins to count from one to ten in Malay, increasingly loudly while she attempts to scale the walls at the side, as if some kind of spider or lizard. Each time she seems to make progress, she falls back down again with an audible smack, but unfazed, she goes back again and again and again, as if compelled by some otherworldly spirit. 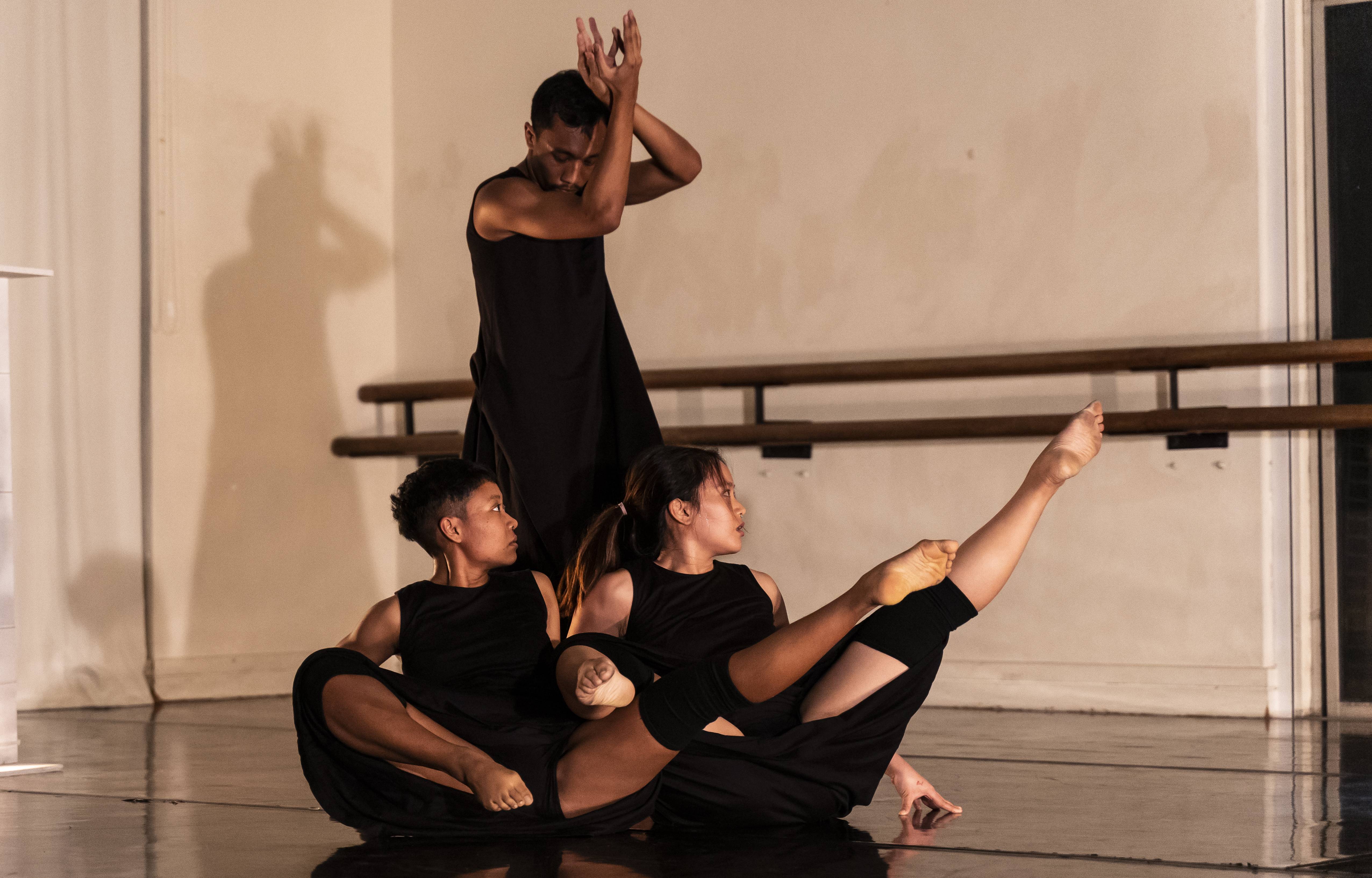 Suddenly, we see Jonit On approaching from the carpark in the distance, one of the most visually stunning moments of the night. Walking slowly and purposefully, there is an ominous, immediate sense of tension when she enters the space. Both Syarifuddin and Syimah react to her, each choosing to don a loose black dress as Jonit does. One thinks of them as akin to the three witches of Shakespeare’s Macbeth, as their movements become wilder, frenzied, and ritualistic, as if getting ready to summon some kind of creature. We think also of the idea of colonialism, or of taming the wild, primal side of us with clothes, synchronising our behaviours and evolving into a member of society as they begin to dance with each other. Towards the end, they being to assimilate into a single being, crossing their legs over each other, and we think perhaps, of a settling of the spirit, of our internal and external selves finding a happy medium and finding peace, as the piece draws to a close. 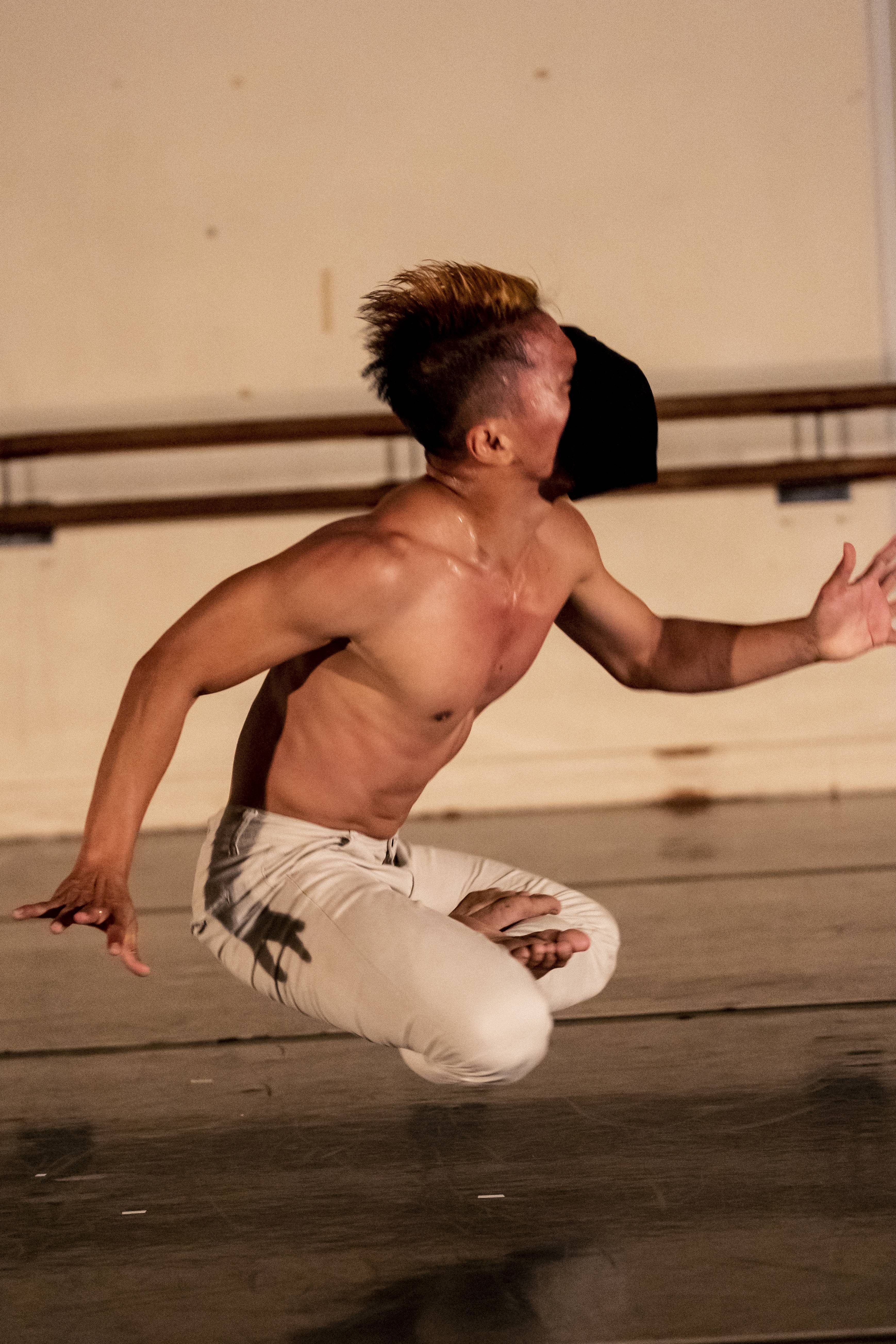 In the final showcase, Indonesian dancer/choreographer Moh Hariyanto presented Sila, exploing his ritual culture that connects his body to a higher being. Moh begins by unzipping his hoodie to become barechested, stepping from audience onstage, as if entering a sacred arena. He crosses his legs and trembling, puts on a songkok and begins to meditate. As if possessed by some kind of spirit, he begins to groan and yell out loud, as if in pain or struggling to fight the impulses of his body. There is true fear that the audience feels as he begins to bounce and vibrate, all while still maintaining the meditative stance. His legs still crossed, he falls on his back and bounces around the stage, showcasing so much strength as we observe his musculature flexing as he performs these feats. It’s raw, primal, animal as he pauses for a moment, legs still crossed while looking directly into audience’s eyes, finding some kind of spiritual connection. He returns to the centre, and just when we think this ordeal is over, he moves the songkok to cover his face entirely instead, before continuing, as if completely consumed by his beliefs, before the lights fade to black, perhaps a warning of religious extremism, or the sheer power of an omnipotent force.

Displaying raw potential in various stages, most if not all close enough to be considered a complete work, each of the works showcased in this year’s edition of Off Stage brim with creative energy, each one powerful in their own right and fiercely distinct, as they show off each choreographer’s individual aesthetic and identity through dance. There is something inherently beautiful about seeing the ways these choreographers’ minds work, and to see their process right before us, a keen reminder of the power of dance and the human spirit.

Off Stage played at T.H.E Dance Company’s studio in Goodman Arts Centre on 16th and 17th July 2019 as part of the M1 Contact Contemporary Dance Festival 2019.