The M1 Contact Dance Festival’s Open Stage programme remains one of the most exciting parts of the festival each year, gathering international dance talents to perform alongside local ones to showcase a range of the very best contemporary choreographies of today, from the playful to the profound. With Programme B, we caught four very different works from female choreographer/dancers hailing from Australia, Japan, Singapore and South Korea, each one special in its own right. 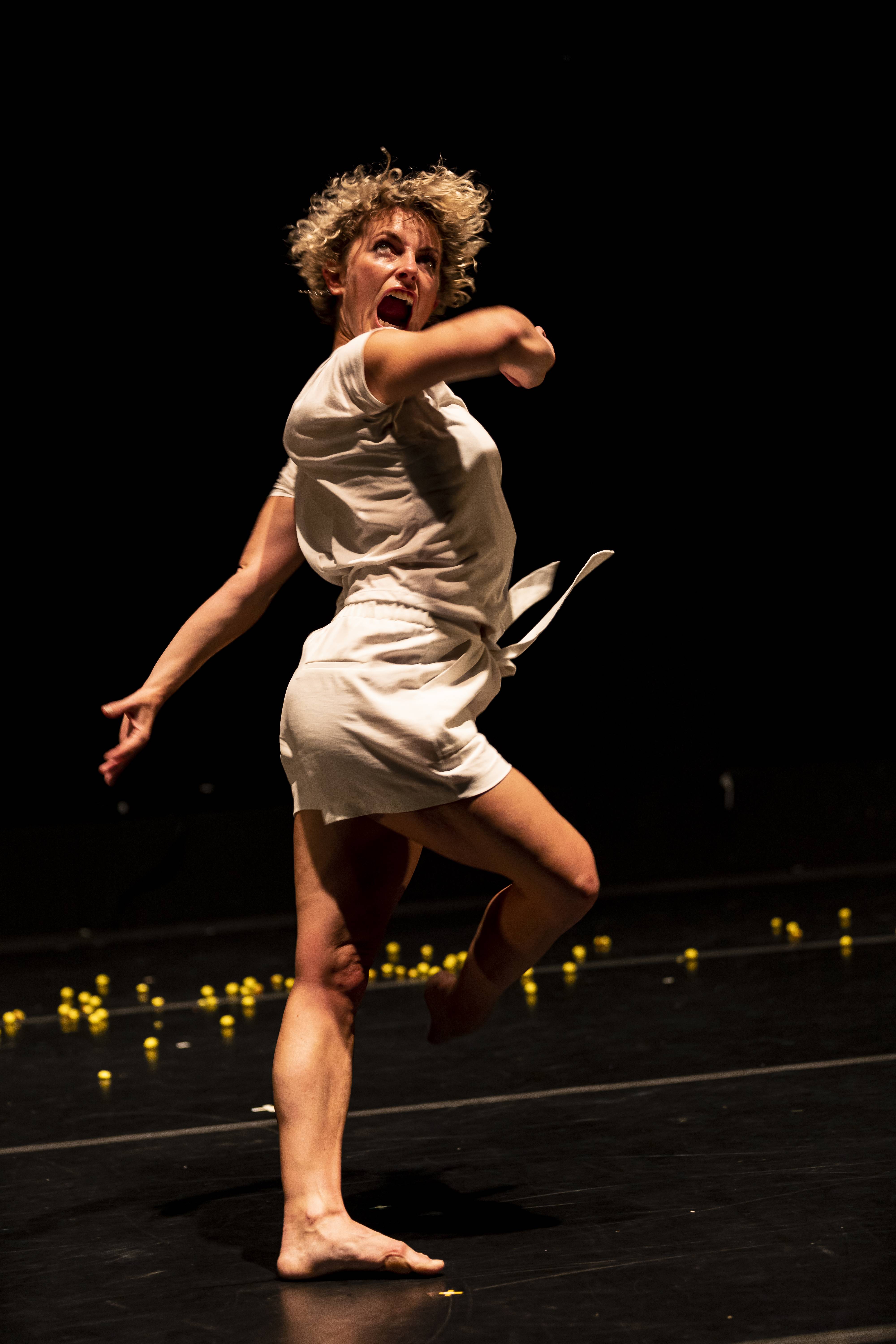 We began with Australian dancer/choreographer Natalie Allen’s Climacteric. As its name suggests, Climacteric is a work that brings us on a journey through the peaks of emotion, from the highs of jubilation to the depths of depression, embracing all of life’s unexpected feelings through movement. Dressed in a white top and white shorts, Natalie begins on the floor, convulsing as if in some kind of pain and suffering. Blackout, and we see her walking lightly, like a goddess of the harvest as she sprinkles popcorn all over the Esplanade Annexe Studio. 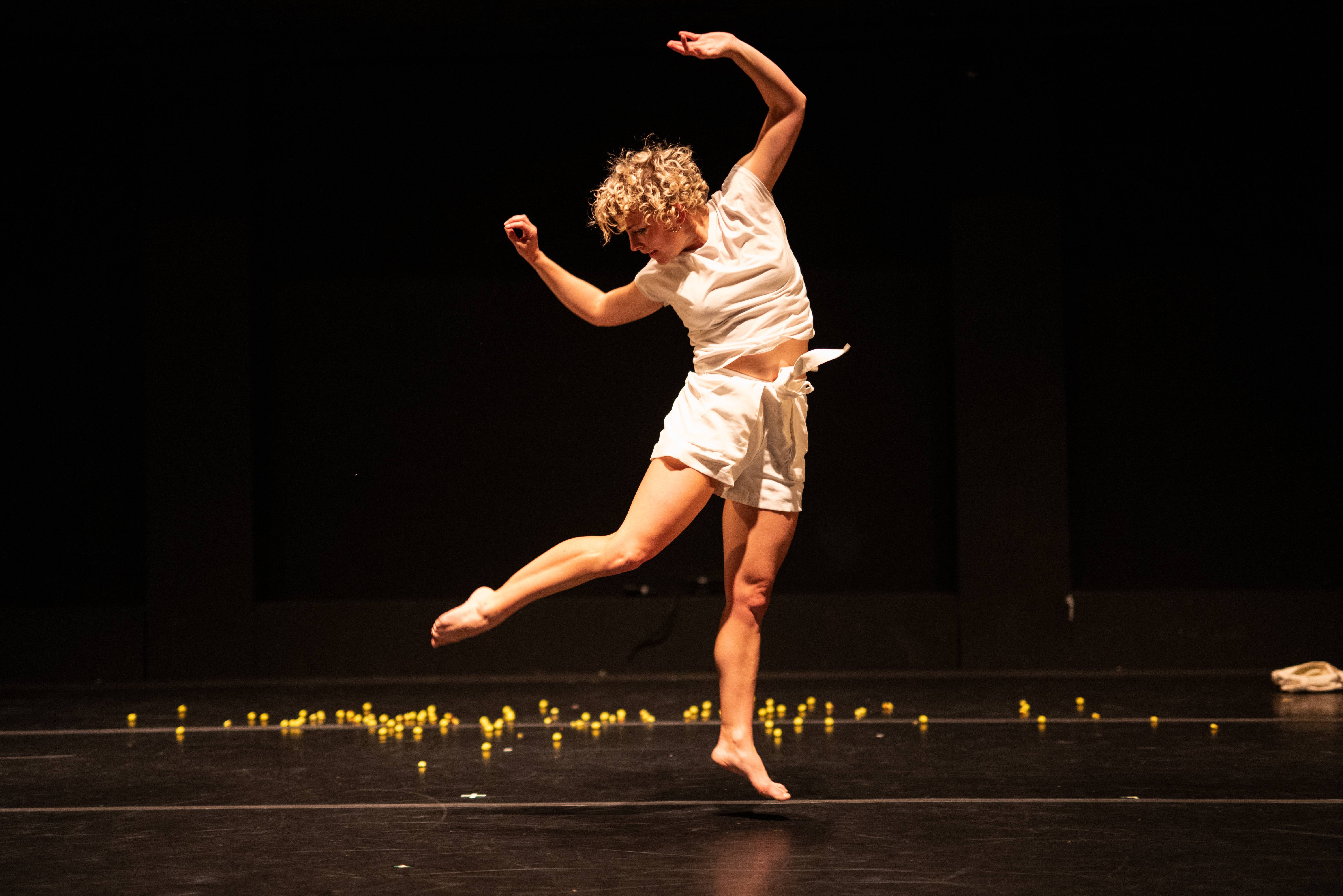 She dances, exuberant, moving rapidly around the stage and exuding pure joy and ferocity. But with the next blackout, we find her once again on the floor, convulsing. We think of those suffering from manic-depressive, bipolar disorders, as she repeats the sprinkling of popcorn in the next scene once again, caught in a cycle of joy and despair. It is all she can do then to use dance as a means of resisting these fears and anxieties, as she channels her emotions into movement, living fully, truly, and utterly without holding back, every moment a climax. 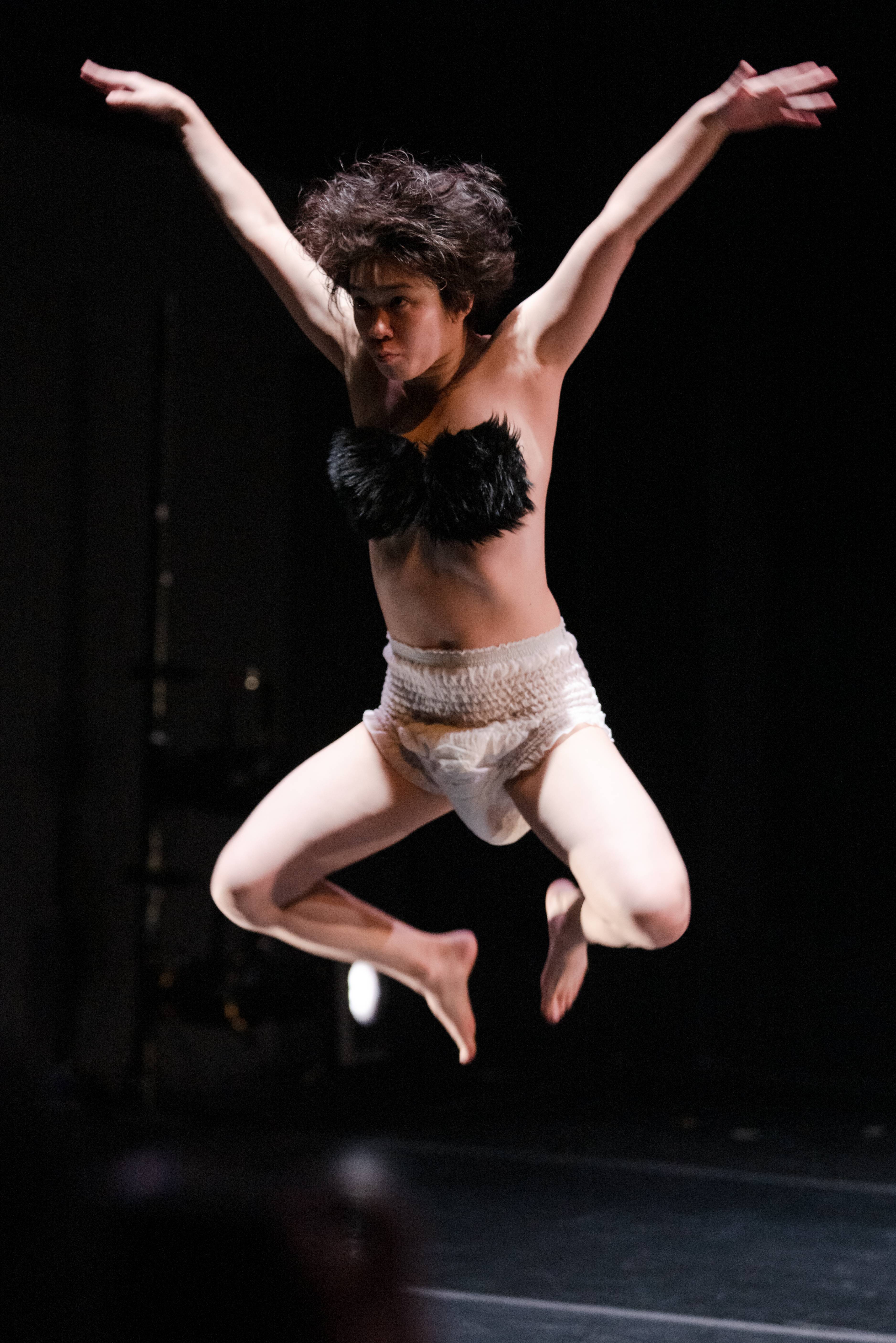 Japanese dancer Reisa Shimojima then presented her unusually titled work Monkey in a Diaper, inspired by a quote from Japanese author and politician Shinichiro Kurimoto, who stated that a human being is a monkey wearing extra underpants. In this work then, Shimojima questions her own humanity, adulthood and femininity, boldly coming out onstage dressed in nothing but a furry tube top (with no backing), wild, unkempt hair and a literal adult diaper. Taking on distinctly animalistic movements, Shimojima can only be described as wild, as she scoots around the stage, face scrunched up as she channels all her primal energy. She squats down, scratches at her crotch, nibbles at her own toes, no filters or cares given in the world and fully embracing the beast that she is inside. Several times, she even pours hot tea into her diaper, her face groaning in pleasure, before she rushes backstage, flings the diaper back onstage, and comes out in a new one. 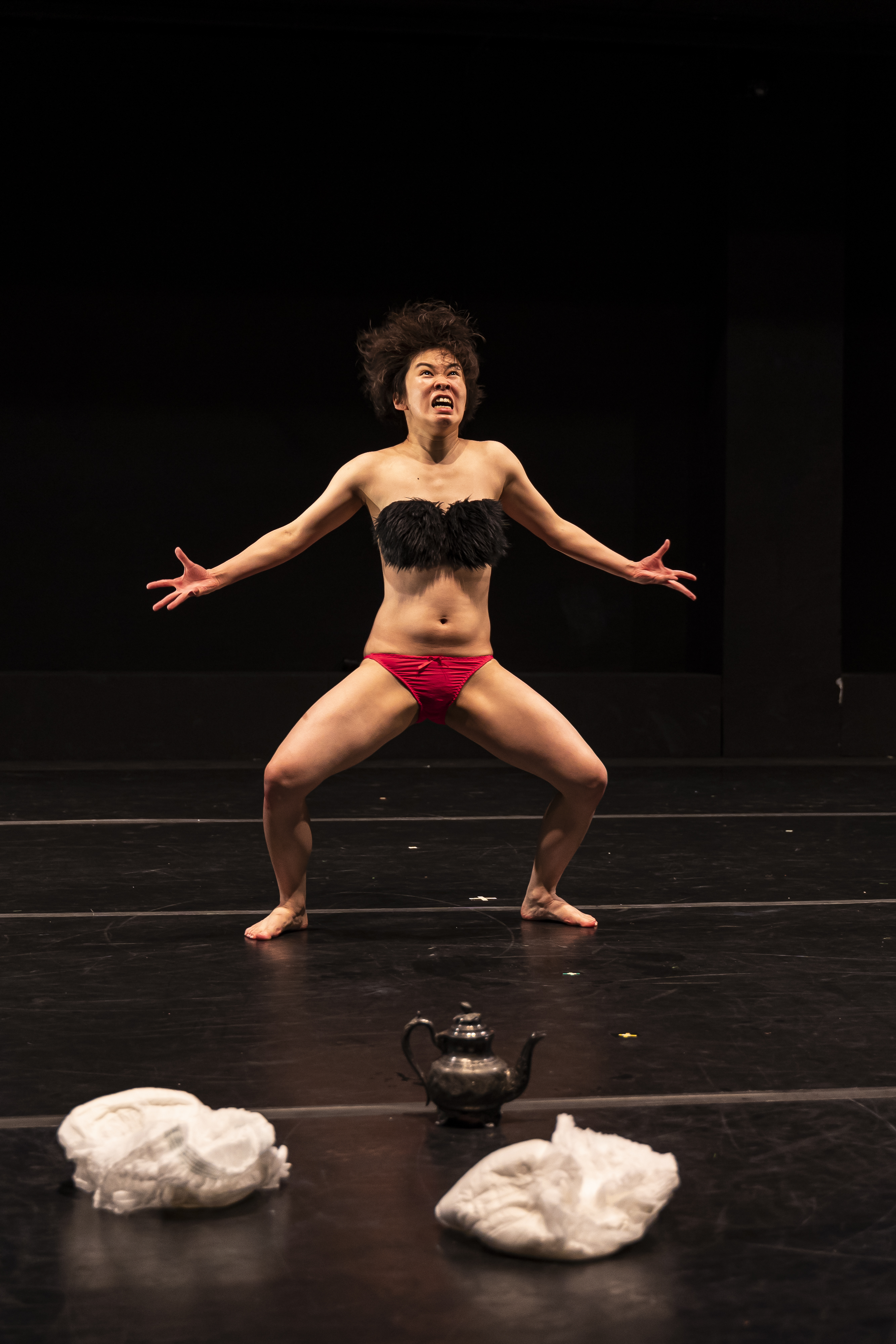 But things change when Shimojima’s own track ‘Opanchu’ plays, sampling a man’s speech and repeating the word over and over again. It is then that she begins to slam herself into the floor each time the word is spoken, forcefully changing her behaviour as she goes from monkey to human. She goes backstage, returns in ‘proper’, skimpy red panties, as we hear doomsday cult Aum Shinrikyo’s anthem play, while Shimojima marches, all smiles. We think of the fine line of what differentiates humanity from the animals, and to what extent we have chosen to tame our very own natural sides, the real parts of us, as society, cult-like, swallows us whole. If we truly are monkeys in underwear, should we then embrace it? Shimojima offers no easy answers, except that if we are in underwear, it damn well better be sexy. 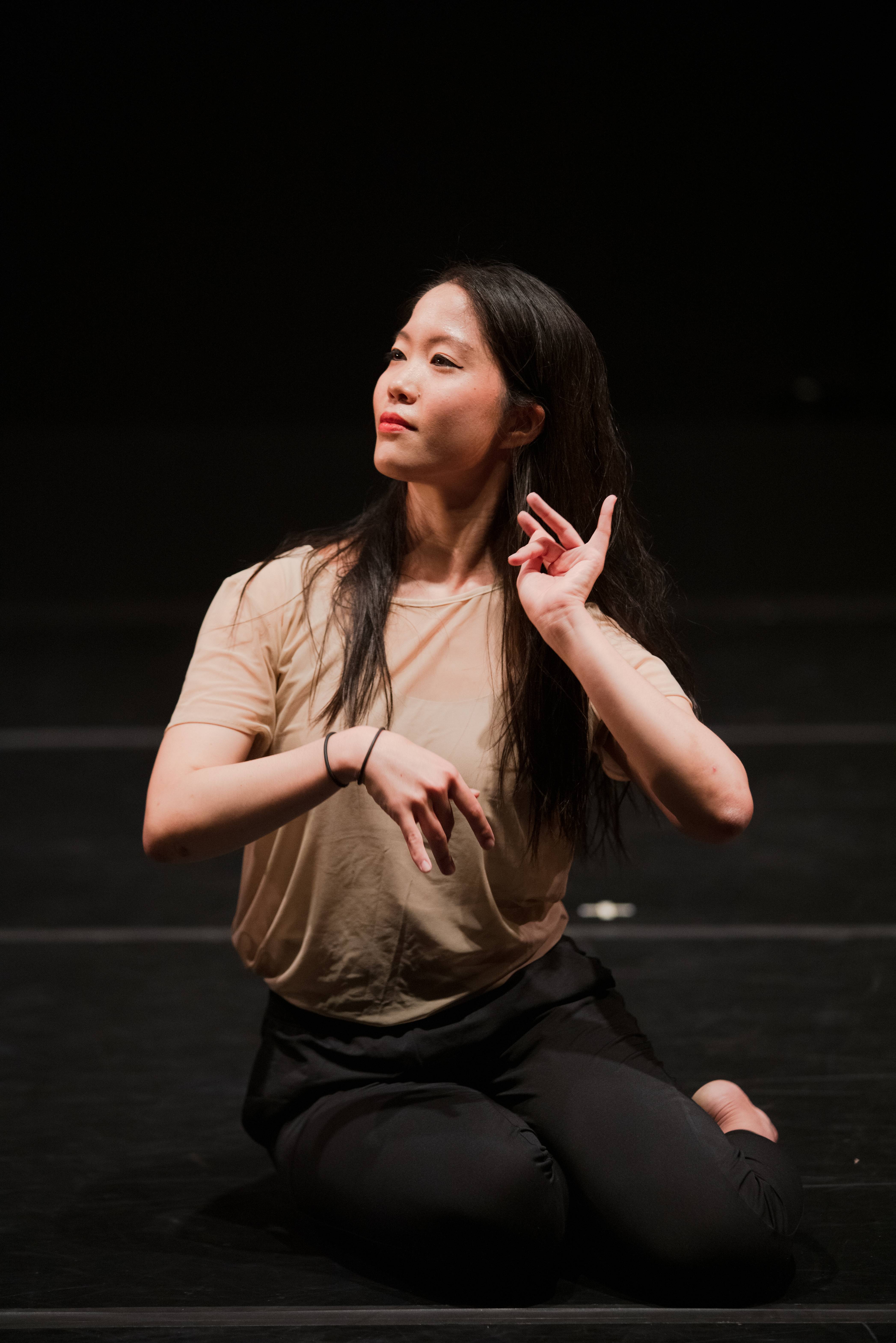 Local dance artist Bernice Lee then presented her work: Ghosting: Indelible in the Hippocampus. Unusually, Bernice begins by stepping onstage with a laptop, walking up to the audience and using the webcam to take a wefie with us. Setting down the laptop, she then returns to the stage, holding up butcher paper that informs us that we are free to record her as we please, and to even tag her on social media when we do so. By allowing us to do so, any and all recordings are made on her terms, imbuing her with a kind of commander status as her performance begins proper. While the title is never made entirely clear, the ghosting it refers to is likely more the idea of one becoming a ghost, rather than to ignore someone completely. Inspired by Christine Blasey Ford, the woman who accused Trump’s assistant of sexually assaulting her almost four decades ago, Ghosting then becomes a commentary on how we are to find our own voice and power once again, even in the face of a world that refuses to listen. 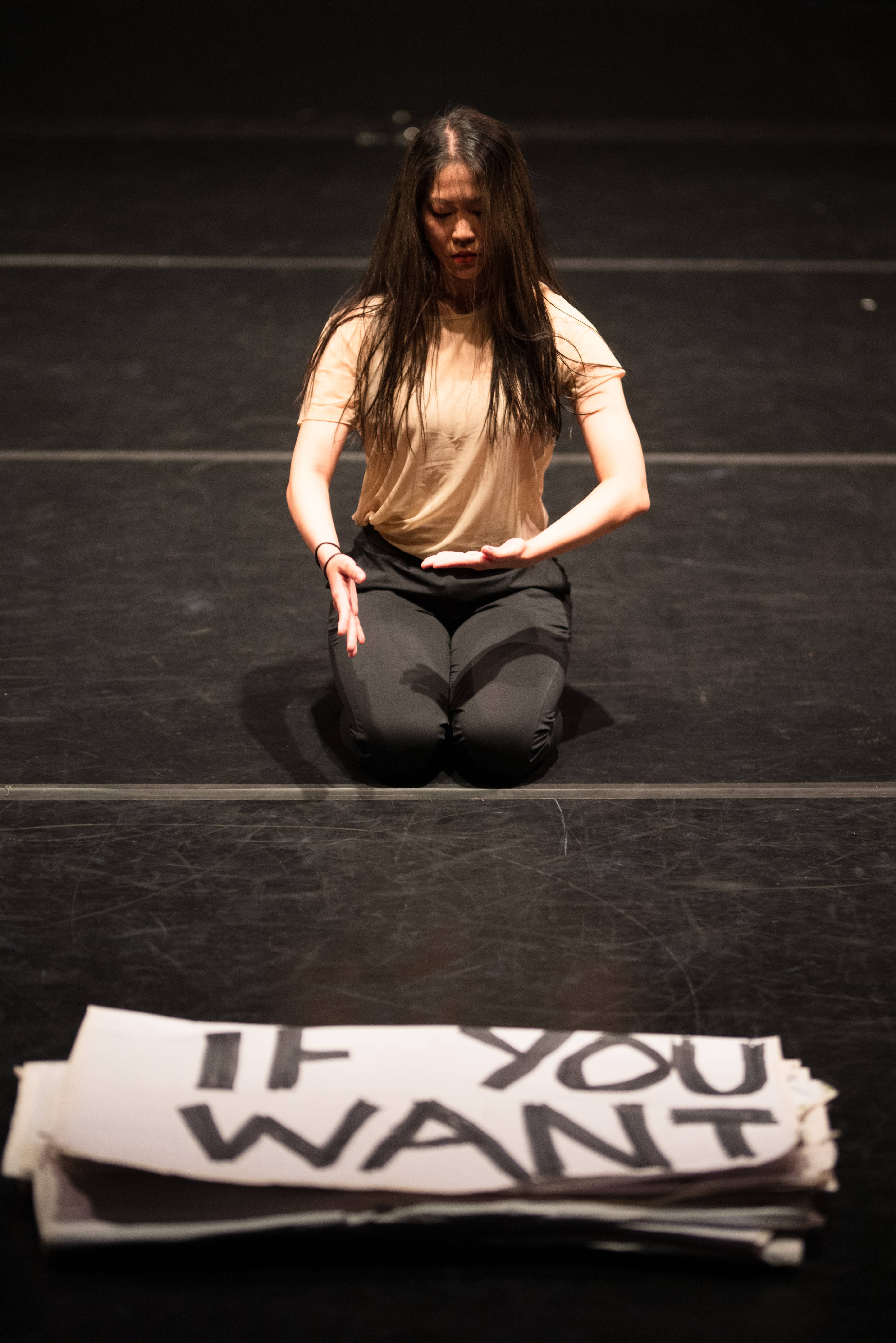 We watch as she attempts to get a handle on her own femininity, brushing out her hair before despondently looking at the strands that fall out and shoving them quickly into her pocket. There is the sense of one’s own mortality and the temporal status of beauty evoked from watching such scenes play out before us. With no soundtrack, our attention is completely on Bernice and every movement she makes. Suddenly, she begins swinging her head, her hair obscuring her face and she yells an absurd sounding sentence, relating to the hippocampus (the part of the brain that controls our emotions), as if she is trying to control all of it, to not feel as bad as she currently does. The ghosting and dying of a body seems inevitable, yet, Bernice wants to gain control over it again. We end abruptly and suddenly as she yells ‘STOP RECORDING’, before the lights black out. Bernice has shown that she can and will find some form of control, as futile as it seems, and we must never let ourselves fade away to simply becoming ghosts of our selves. 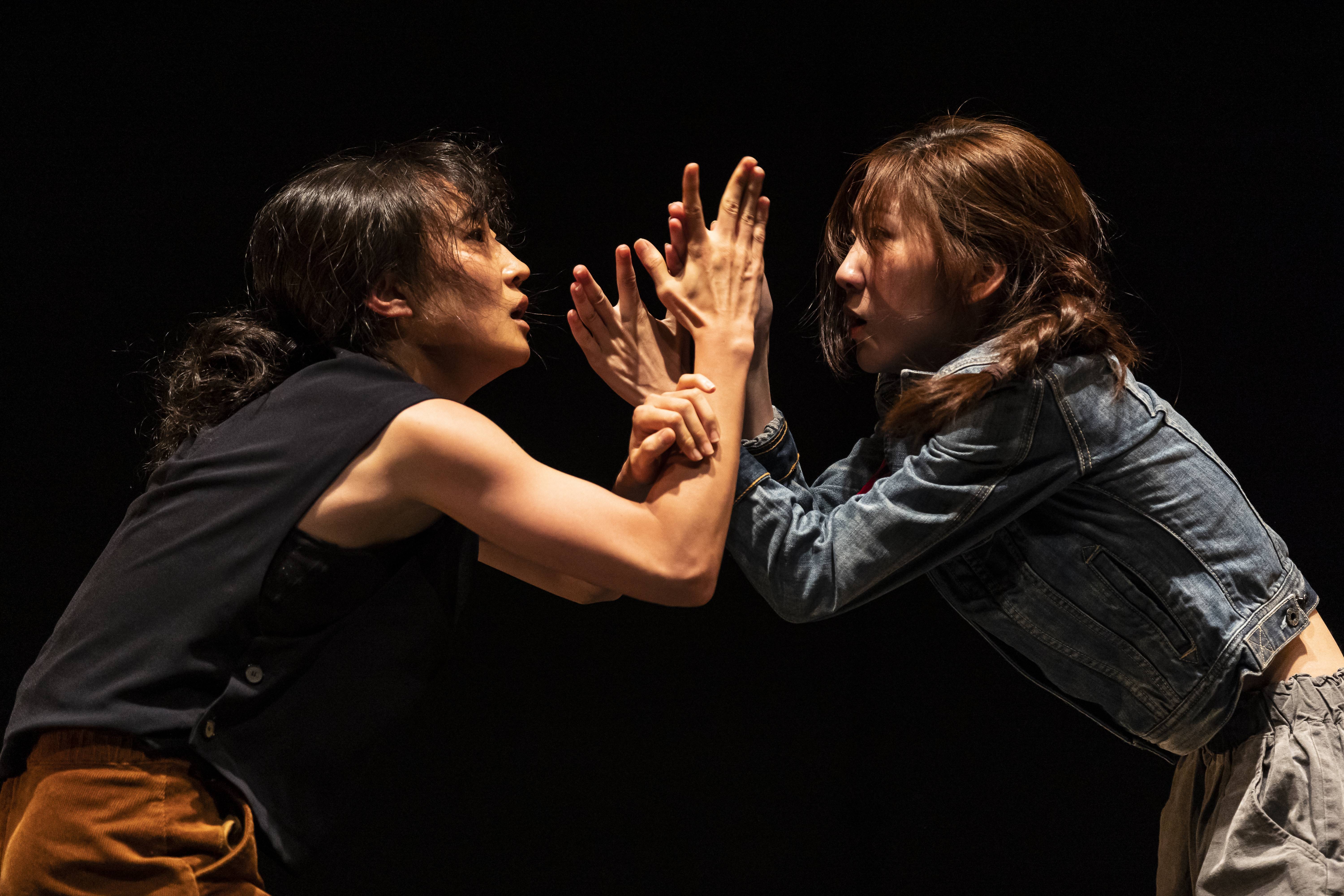 Finally, Programme B concluded with South Korean artists Lee Kyunggu and Lee Yeonju from Goblin Party, as they presented Breathing Hole. Taking inspiration from watching footage of North Korean defectors crossing the border, the artists imagined them as small seeds, trying their best to push through the suffocating soil to find some kind of breathing room, to germinate and eventually powerfully push their heads to live even after trampled on. Ostensibly humourous, we hear the sound of blustery winds in the background as both dancers shuffle about the stage awkwardly and comically, seemingly inhuman as they go on what seems like a journey. It’s quickly established that the characters they play are best friends, sticking together amidst all odds as they travel great distances, helping each other over difficult obstacles, from imaginary mountains to rivers, reminding each other to remain quiet when the need arose, and to run as required. 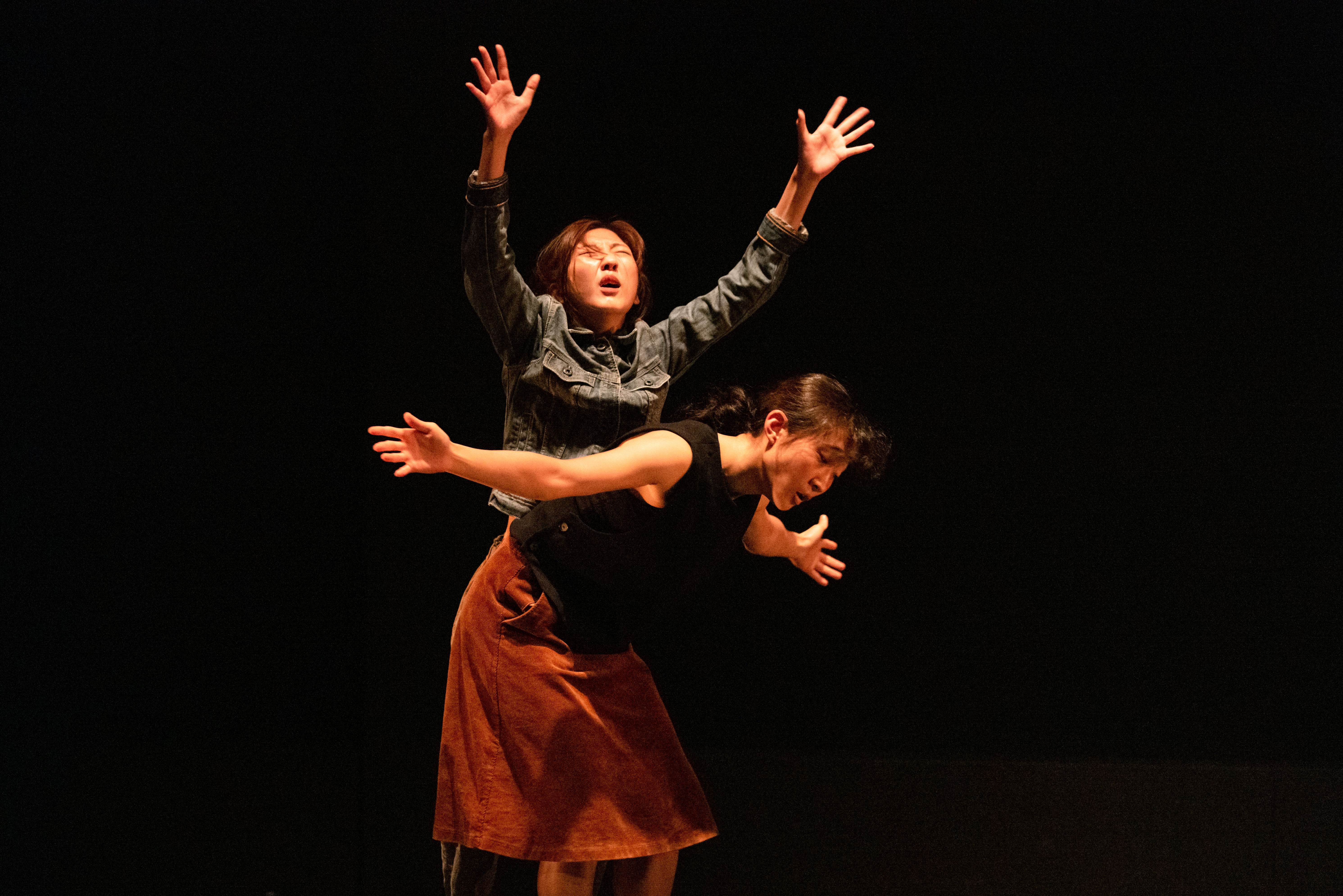 Knowing the context of the performance, as well as hearing M83’s incredibly emotional track ‘Wait’, Breathing Hole had this reviewer in tears midway through as he watched these two best friends go through thick and thin together, refusing to give up and always finding a way to stay together even when threatened to be torn apart. The movements are humorous yes, but the context serious, and one cannot help but root for them as they make their escape. At one point, the two even sit down and blow soap bubbles, as if trying to remind each other of the good times they’ve had together in an attempt to motivate each other to carry on. There are moments where hope seems futile, as they pin themselves against the wall, as if preparing for death by firing squad, yet they seemingly make it through alive. Certainly the most epic, most completely realised piece out of the four presented, Breathing Hole ends with one of them piggybacking the other, supporting each other to the very end as they step into the light they so deserve, and into a brighter future after their long and arduous journey together.

Open Stage played at the Esplanade Annexe Studio on 18th and 20th July 2019 as part of the M1 Contact Contemporary Dance Festival 2019.