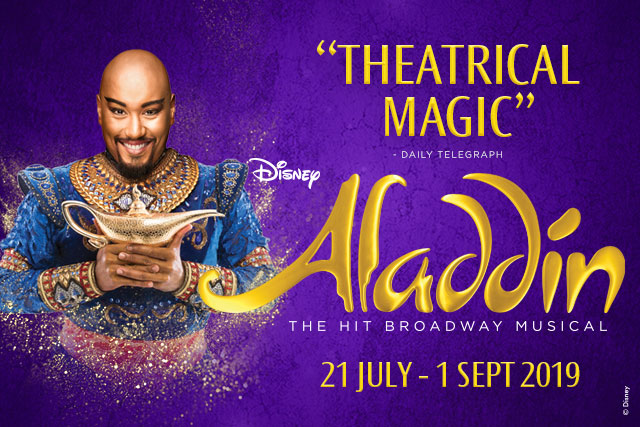 It doesn’t matter how much you love the animated film – this staging of Aladdin is a whole new world in itself filled with theatrical magic of the best kind.

For all of Disney’s theatrical adaptations of their films, Aladdin certainly ranks among one of the best, effectively bringing out the colourful world of the film to the stage. Adapted from the 1992 animated film of the same name, Disney’s Aladdin the Musical stays mostly true to its source material, as we follow the titular ‘street rat’ Aladdin (Graeme Issako) as he lives out his life on the streets of the Arabian-inspired city of Agrabah. Things take a turn for the better however, when a chance encounter with the princess Jasmine (Shubshri Kandiah) gives him the opportunity to retrieve a magical lamp – whereupon he discovers an all-powerful Genie (Gareth Jacobs), ready to grant him three wishes to fulfil anything his heart desires. 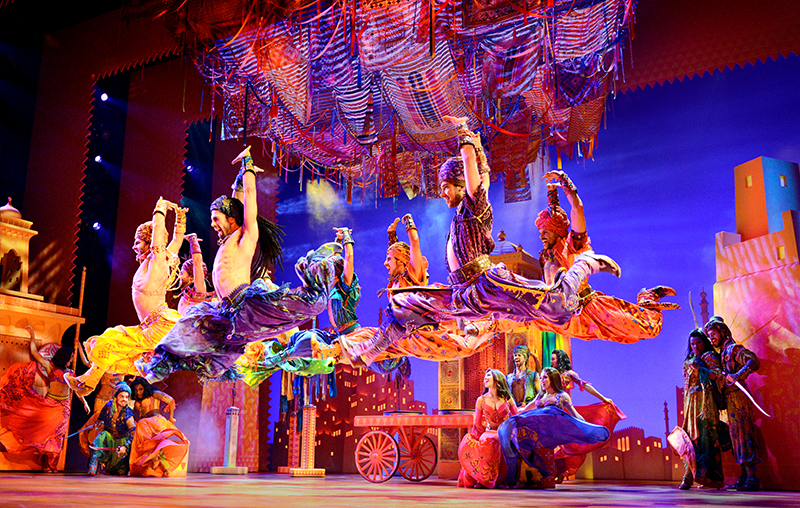 From the moment the curtains open, one is immediately drawn into the world of Agrabah – scenic designer Bob Crowley’s incredible set features buildings that grow and shrink, hidden exits and smaller ‘rooftops’ creating the illusion of depth that make the Sands Theatre stage feel like an entire city. Alan Menken’s familiar opening number ‘Arabian Nights’ is no longer a long, mystical drawl from a single singer, but an energetic full ensemble number that immerses us straight into the Agrabah, with our narrator the Genie making cheeky meta-theatrical references to how the citizens practically thrive on song and dance. Later on, we’re also introduced to well-composed and written originals, from emotive solos for the main cast (Aladdin with ‘Proud of Your Boy’ and Jasmine with ‘These Palace Walls’), along with perfectly pitched rearrangements that fully capitalise on the theatrical context and spectacle (‘Friend Like Me’ and ‘Prince Ali’). Led by music director Bren-Alan Huffman, all of these songs are capably brought to life by the 15-piece orchestra. 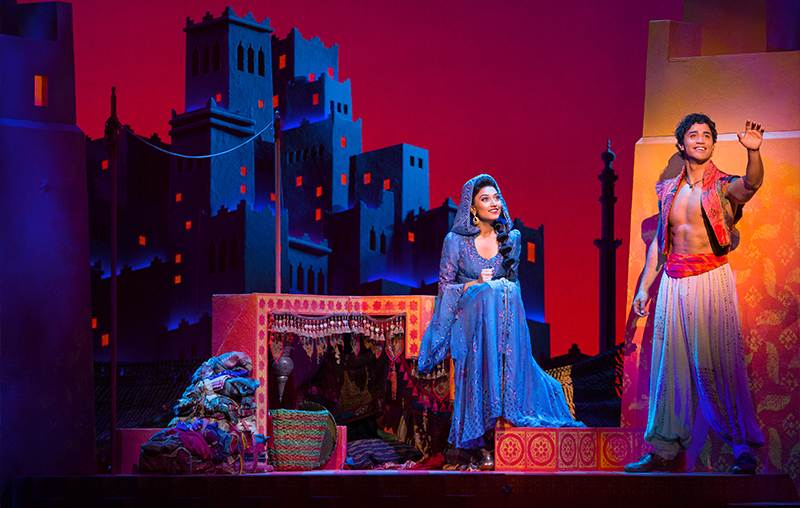 It’s not long before we’re introduced to our hero Aladdin, played by the suave Graeme Issako, showing off an irresistible charm that makes it completely understandable why the women of Agrabah all swoon over him. Issako displays strong athleticism in his scenes as he leaps from building to building while pursued by the authorities, yet his performance is balanced by an emotional vulnerability that comes out in new song ‘Proud of Your Boy’. Here, Issako’s voice is filled with emotion as Aladdin vows to do his late parents proud, trembling slightly in the character’s fear, and ending on a strong note of determination, one that firmly establishes him as a hero we want to support throughout. Meanwhile, Shubshri Kandiah is the spitting image of an Arabian princess, cutting a lithe, dainty figure, yet filled with a fiery energy to remain fiercely independent and answer to no man. As Jasmine, she impresses from her very first introduction as she aches with desire to be free from ‘These Palace Walls’, giving this version of the princess a far stronger feminist overtone that updates the character perfectly for the modern world.

Issako and Kandiah’s performances are individually strong, but together, divine, with every shared scene only strengthening our desire to root for from the moment they set eyes on each other. Already in the duet ‘A Million Miles Away’, their destiny with each other is sealed as they find a curious trust and attraction to each other. Naturally then, this comes to fruition perfectly with the eagerly anticipated rendition of ‘A Whole New World’, one that left audience members gasping with its visuals and its portrayal of the iconic magic carpet ride, their onstage chemistry leading to a more than believable romance as they soared (literally) into a starlit sky. 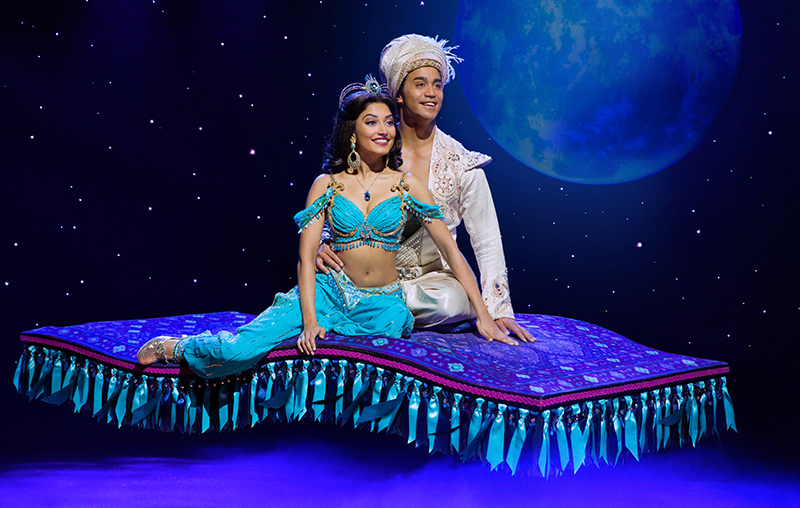 In all honesty, if there’s just one reason to see Aladdin, then the performance by Gareth Jacobs as the Genie alone makes it worth watching. While better known as the big, blue entity made famous by Robin Williams, as our narrator, Gareth Jacobs puts his own spin on the all-powerful being and manages to bring the larger than life character to life with his performance alone. As the first character we meet, the Genie is key to introducing audiences to the world of Agrabah, and Jacobs is charming from the outset as he moves onstage with a lightness to his steps, enthusiastic in every word and an utter riot who steals every scene he appears in, as he guides us through the entire journey of Aladdin.

When we’re reintroduced to the Genie in the Cave of Wonders though, and Jacobs takes it a step up as he and the cast of Aladdin deliver the single musical number that blows just about every other out of the water. With the 18-minute long ‘Friend Like Me’, Aladdin becomes the very definition of spectacle, and the number alone could practically be considered a Broadway musical in itself. Involving the entire ensemble performing mass numbers, literal pyrotechnics, a ‘The Price Is Right’ parody and a string of rapid fire illusions, ‘ Friend Like Me’ is an extravaganza bound to leave any and all audience members stunned, with Jacobs keeping the energy up in from start to breathtaking end, right on into the next scene and into the intermission. 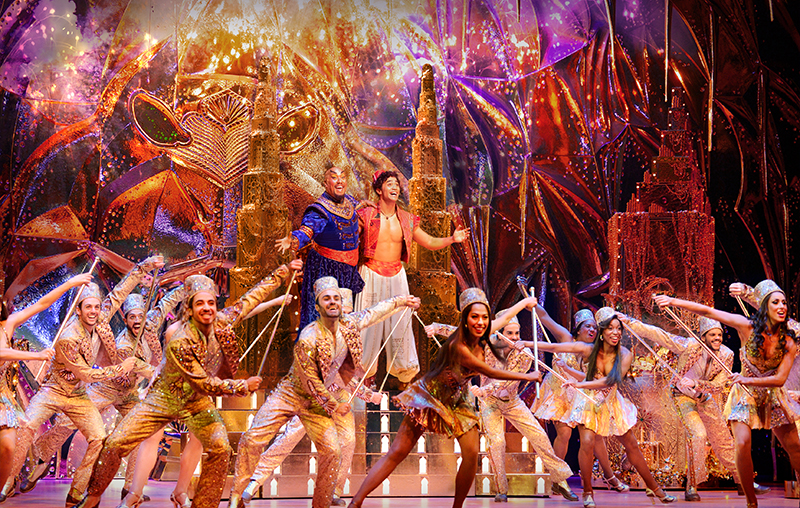 Speaking of the Cave of Wonders, the creative team behind Aladdin gets so much of the details just right – menacing from the outside before transforming into an opulent golden cavern that glistens perfectly thanks to Natasha Katz’s lighting as Aladdin steps into it, complete with echos each time he speaks. As Act 1 draws to a close, Aladdin gazes off at the palace in the distance, a vision of grandeur resembling India’s Taj Mahal that tricks the eye into seeing both the building and its ‘reflection’ in the water before it, simply by using precisely-cut set pieces.

Beyond the set, spectacle awaits in almost every other scene in Aladdin, with Act 2 opening number ‘Prince Ali’ the second most impressive number after ‘Friend Like Me’, bringing out a nearly endless stream of carnival-esque performers that raises the energy of the entire theatre. Gregg Barnes’ colourful costumes immediately bring to mind a fantasy version of the Middle East, with several outfits dripping in Swarovski crystals that catch the light just right and literally shine onstage to give the cast that extra level of class. Thanks to the backstage crew, Aladdin nimbly pulls off theatrical feats such as a whopping 108 costume changes in just an hour, and scene transitions are always smooth, with the pacing and energy well-maintianed throughout. Even in the market scenes, there is such smooth choreography we witness that takes us from one end of the stage to the other, then up into chase scenes across and in and out buildings, while the rest of the ensemble portray the marketers and shopkeepers naturally, with appropriate reactions and physicality, no matter how ‘small’ their roles are. 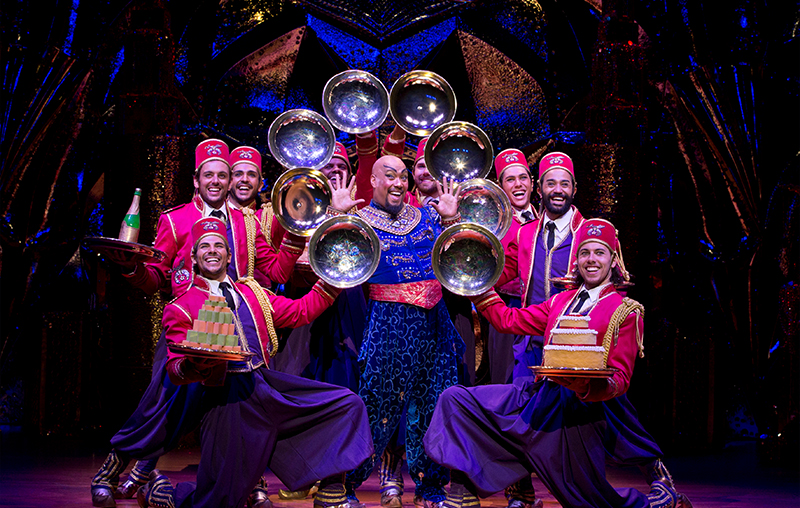 Also deserving of praise would be new characters Kassim (Rob Mallett), Babkak (Troy Sussman) and Omar (Adam Di Martino). Never once do they feel out of place, acting as fellow thieves looking to turn over a new leaf and Aladdin’s best friends. When together, all three provide a jovial quality and show off a real sense of camaraderie evident in their performance that uplifts the energy of the entire cast, whether they’re busking for cash in ‘Babkak, Omar, Aladdin, Kassim’ or hilariously going on an eventful rescue mission in ‘High Adventure’, every unexpected fight scene a delight to witness onstage. Their brotherhood and sense of loyalty to Aladdin is admirable, and provides both comic relief and reaffirmation of the ongoing message of trust and friendship Aladdin espouses, one that audience members of all ages can relate to.

And as for the villains? Both Patrick R Brown and Doron Chester are a joy to watch as they indulge completely into their roles as villainous vizier Jafar and minion Iago respectively, their master/sidekick relationship hilarious and inspiring a real love-to-hate response from the audience as they plot against the palace, or even when they share an evil laugh together. The contrast between Jafar’s greed and Aladdin’s own fears is clear to see when they exchange ownership of the lamp, and one even appreciates, in the climax, how Jafar ‘grows’ physically the more powerful he gets, along with the sorcerous quick costume changes that happen in mere seconds, before satisfyingly getting his just desserts minutes later. 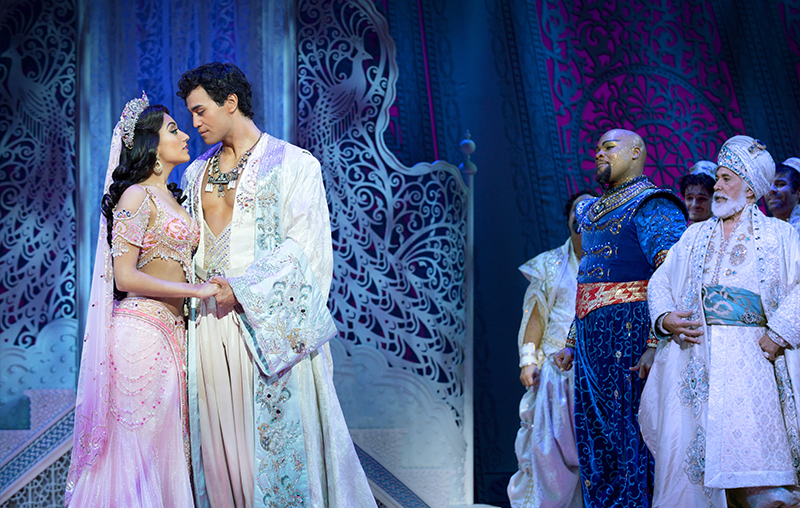 By the time we reach the inevitable happy ending, Aladdin has proven itself time and time again that it is a musical worth catching for its sheer dedication to making every scene a theatrical feat, enchanting each audience member with a sense of wonder and magic that leaves us constantly gaping with awe. Each actor not only displays stellar performances, but also takes us through emotional arcs that show growth, change and ultimately, renew our faith in the power and value of friendship, filling us with an undeniable warmth as we watch Aladdin and Jasmine fly off into the distance on their magic carpet. Boasting one of the most stellar casts and ensembles we’ve seen in a musical, Aladdin the Musical knows exactly how to deliver high-quality numbers from start to end with a simple yet timeless tale you’ll remember for years, making it a production completely deserving of the standing ovation we gave it.

Aladdin plays at the Sands Theatre at Marina Bay Sands from 21st July to 1st September 2019. Tickets available from SISTIC

2 comments on “Review: Aladdin the Musical presented by BASE Entertainment Asia”