Issues of poverty performed by those who actually suffer them.

National Day is just around the corner, yet, how can we truly celebrate justice and equality when there remain countless citizens who don’t enjoy it? Directed by Rizman Putra, assistant directed by Izzaty Ishak, and performed by The Community Theatre (part of Beyond Social Services), of which multiple members hail from lower income households themselves, docu-performance The Block Party then seeks to shine a light on these issues still prevalent in modern day Singapore. 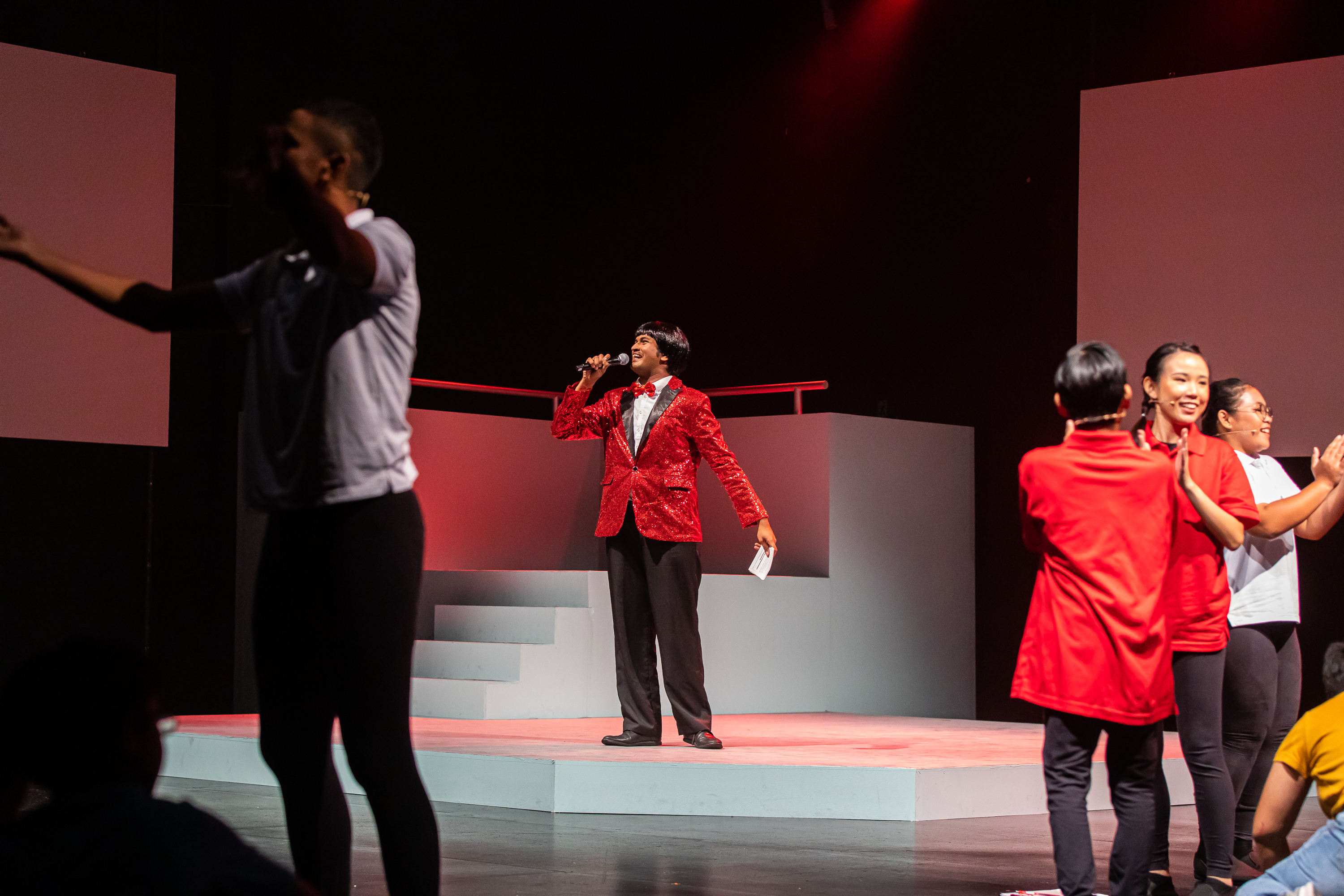 Entering the Esplanade Theatre Studio, we’re immediately greeted by a scene of celebration. Cast members are decked out in sparkling red and white outfits, and it feels as if we’ve stumbled into the midst of a National Day observance ceremony. The festive atmosphere was compounded by pre-show activities, from getting the audience to do the Kallang Wave together, to hearing 53A’s ‘Tomorrow’s Here Today’ playing over the sound system, with the mostly student audience singing along. Emcee ‘Jamie Rosario’ appears, and the stage manager prompts him to begin the show proper, as if we really are at a prestigious event of some sort, complete with being asked to all rise for the arrival of ‘Guest of Honour MP Ong Swee Swee’ with a security detail. 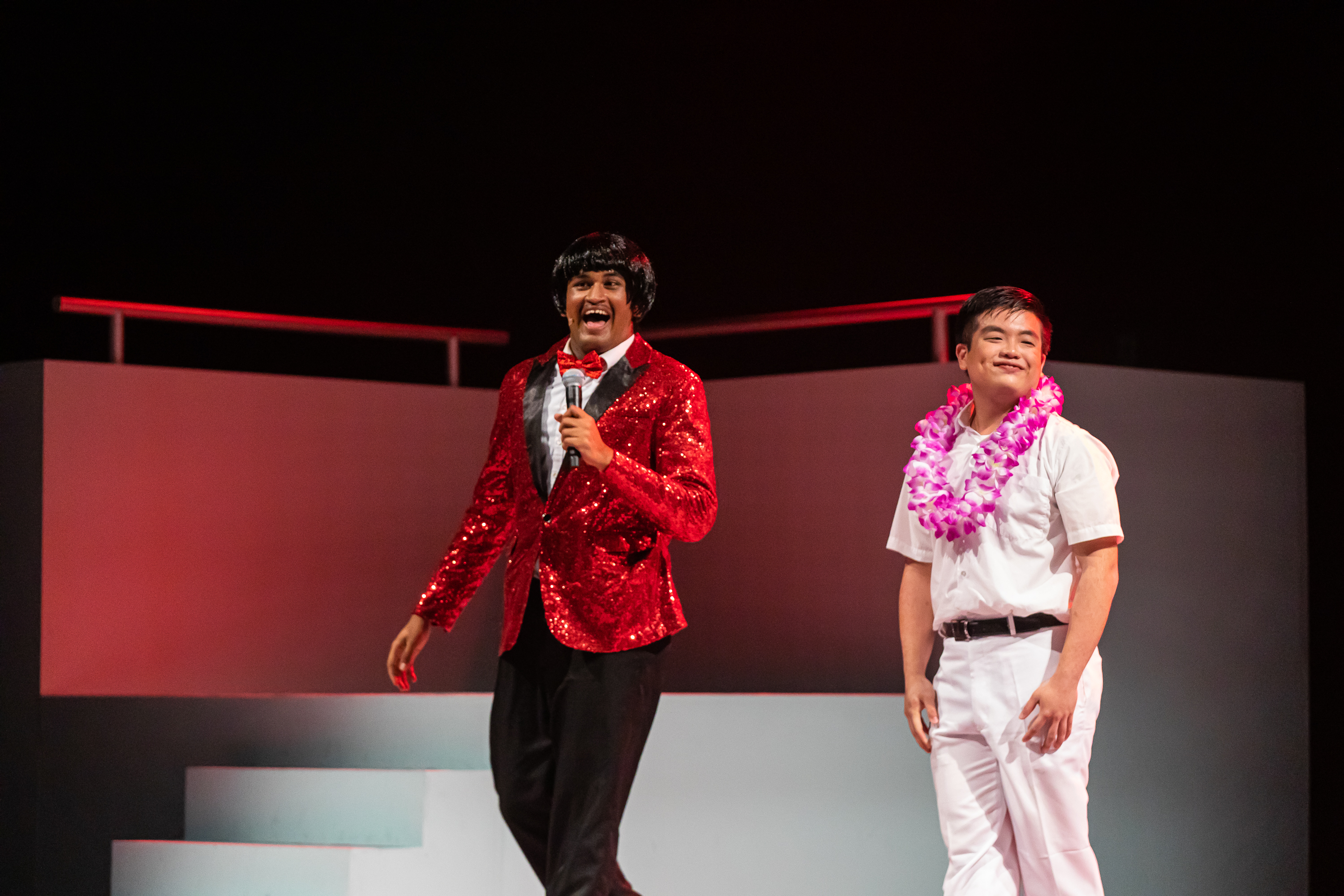 The show itself comprises a series of scenes, as we take a closer look at the various forms poverty and the lower class manifest themselves in Singapore. We begin with a scene of a kampung, watching the tight-knit community help each other out and living in harmony. But when forcefully relocated to HDBs, we see the villagers begin to fragment, as some are happy with the arrival of modern day conveniences, while others lament the loss of the kampung. 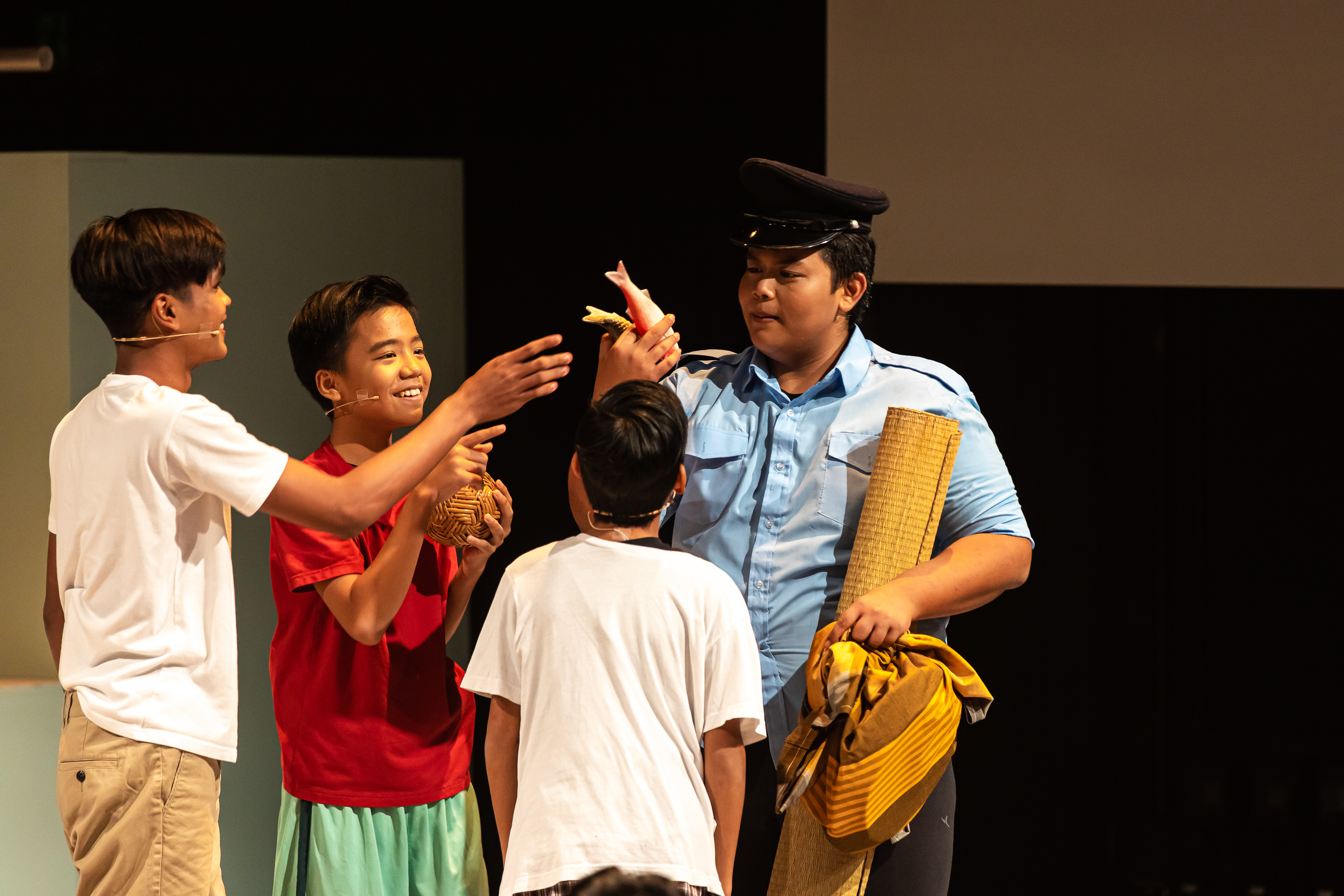 With this comes a variety of changes, especially when we zoom in on the story of 2 young boys – Hakim and Jamil. We watch them grow up as the two younger cast members run off, to be replaced by two older ones. As they play sepak takraw, Hakim awaits his NS enlistment letter, and is plagued by worry about not being able to find a job in the meantime, raising these concerns with Jamil. The two actors have strong onstage chemistry, something that contributes to their believability as they banter. But this doesn’t last for long, as an ‘evil genie’ comes along and corrupts them with vices of smoking, with things only going downhill from there. With time in their hands, it’s all too easy to fall into the pitfalls of negative influences and other problems that would send their lives spiralling. 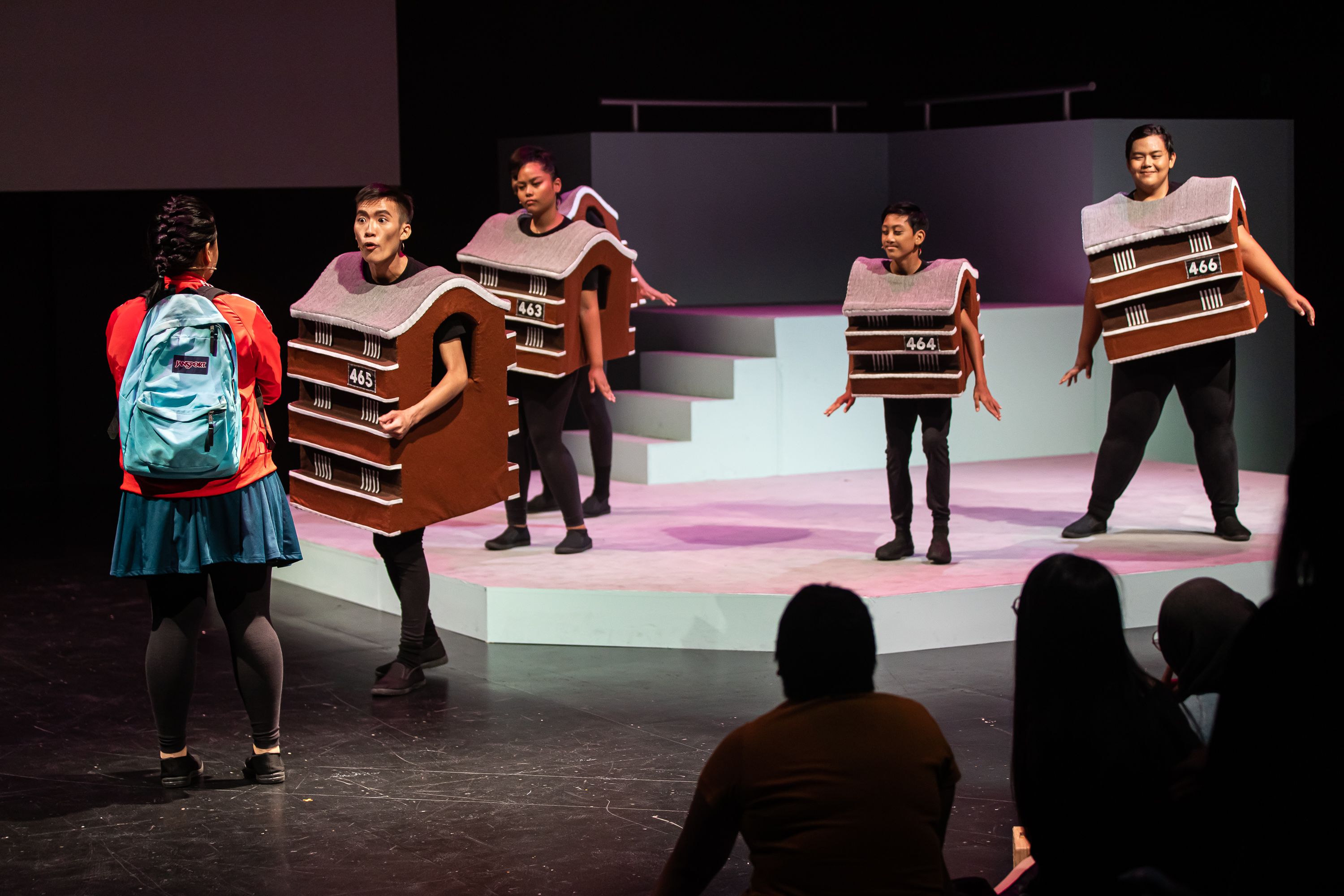 In our next scene, we get a glimpse of old ‘one-room flats’, with actors putting on cubical, house-shaped costumes. We take a look at how those that live here are viewed by others, with an increased number of spot checks done on the residents here due to being in a ‘shady neighbourhood’, with the kids doing homework in void decks and more likely to be questioned by police. It’s a painful reality that those in the audience who have never lived in such an area may never have experienced, opening their eyes up to the truth of living in Singapore. 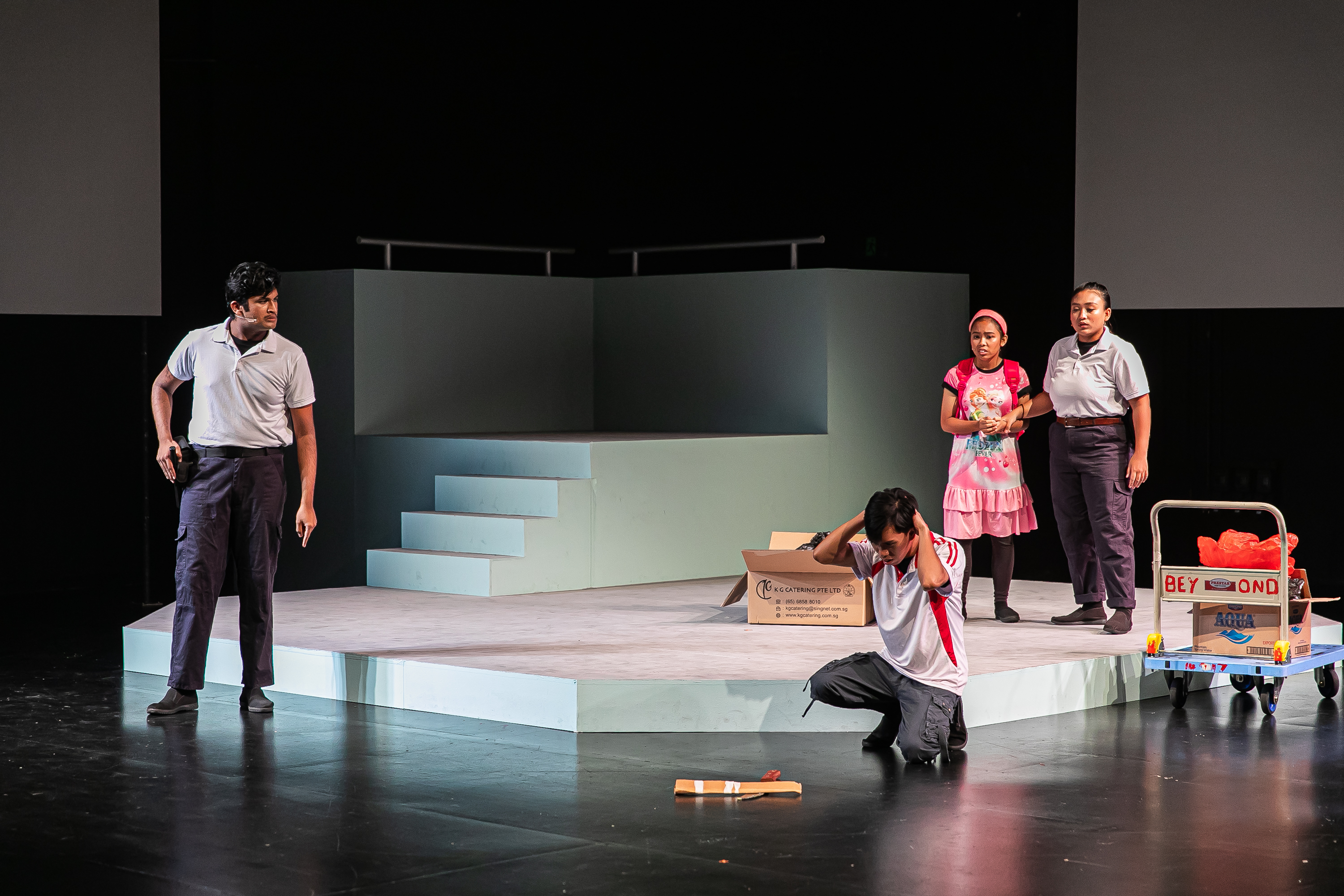 In our next scene, we meet a young girl and her father, a rubbish collector. As the two search through trash for ‘treasure’, they find surprisingly useful items, such as a school bag in good condition, and we realise how much waste we produce in our positions of privilege. Knowing that this father would do anything for his daughter, we cannot help but feel touched. But as the father brings out a machete from the trash, swinging it around for fun, the lights suddenly change, menacing almost, as the police arrive and accuse him of trying to hurt his daughter, once again emphasising our harmful assumptions and first impressions based on people’s circumstances. 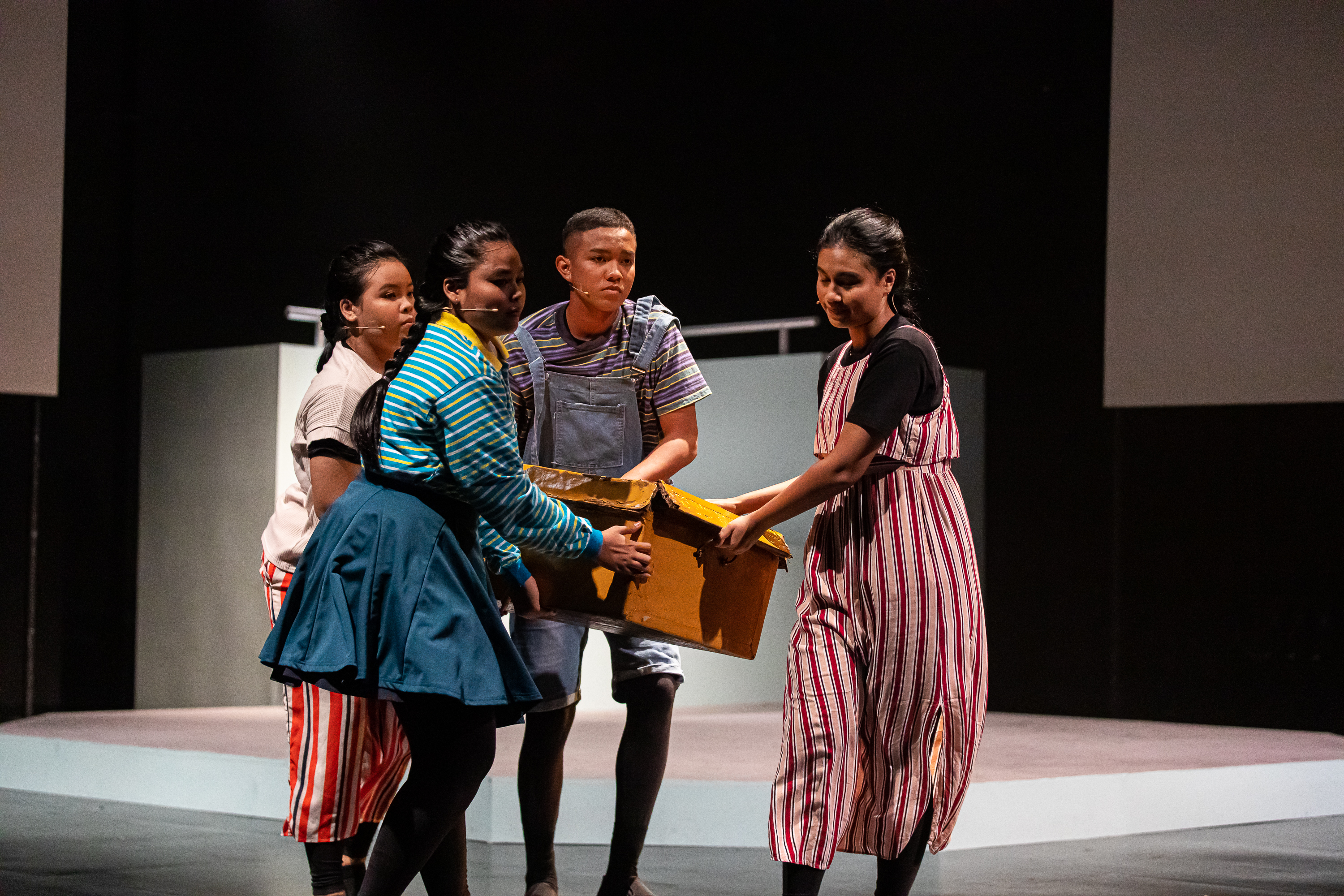 In the scenes that follow, we continue to see instances of how various people need help, but often cannot fulfil conditions to be met that would allow them to benefit from certain policies, rejected and stuck. When a teacher raises a hypothetical question about how many soccer balls one can possibly fit into a tent, one girl uses math to calculate it based on volume. A far poorer student recalls her own experience living in an actual tent, and the fear of not knowing when someone would knock to evict them, or the discomfort of being in a tent on a hot day or a stormy one. 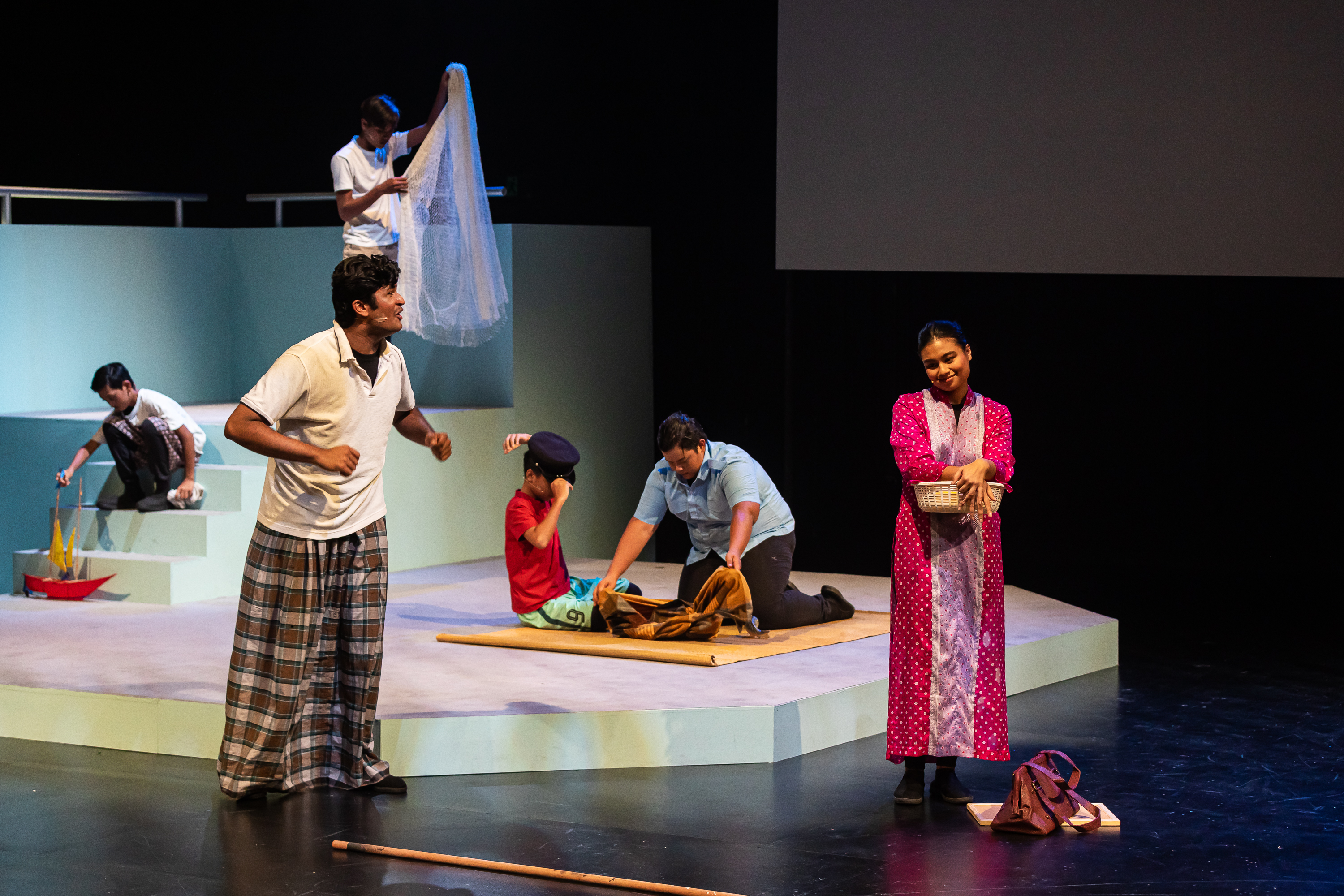 But even amidst the doom and gloom, there are small pockets of hope within The Block Party – we hear, in a video, how the mother of one of the actors still finds time to spend with the family to go fishing as an act of family bonding, something they’ve learnt the art of patience from. It’s a nice, heartwarming scene that gives us the possibility and hope that good things truly do come to those who wait. 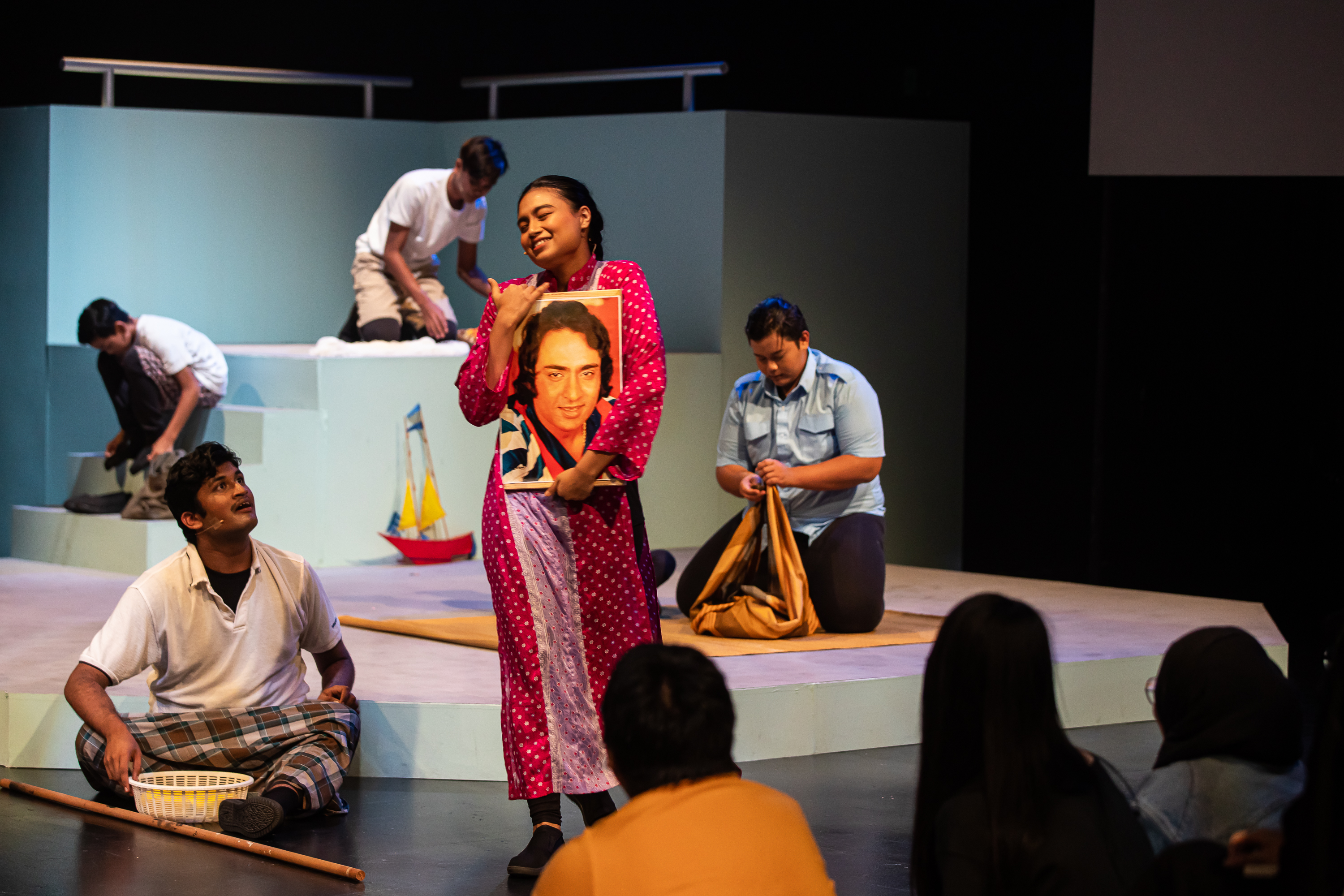 We then hear the actors speak about their own dreams and aspirations. Audience members are each given a sheet of paper to pen down their own thoughts and wishes, before throwing them into the heavens in the hopes they would be answered, filling the space with a sense of possibility that things will eventually get better for everyone. 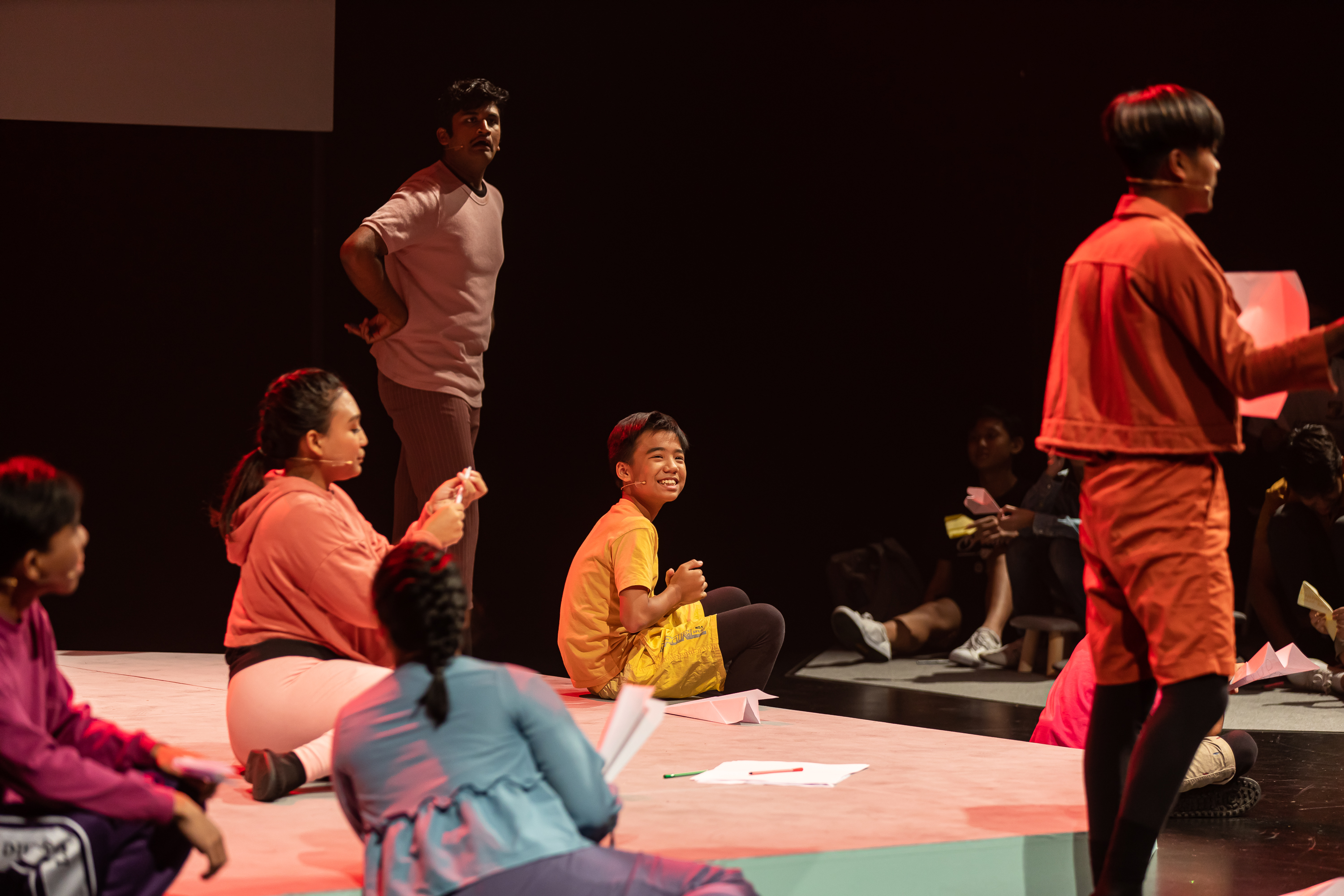 Throughout the performance, we not only get to see the relatively young cast show off both their acting chops (helped in part by the authenticity with which they play their roles with), but also their skills at doing choreography (by Zakia Fathiha), and even performing musically with a special song titled ‘H.E.L.P.’ composed for the show. Incorporating video and multimedia elements into each scene truly made it feel like a bizarro version of a National Day Parade performance, which helped hammer home the importance of these scenes as real things that happened in Singapore, of these rarely heard voices of the underprivileged and unheard in the community. 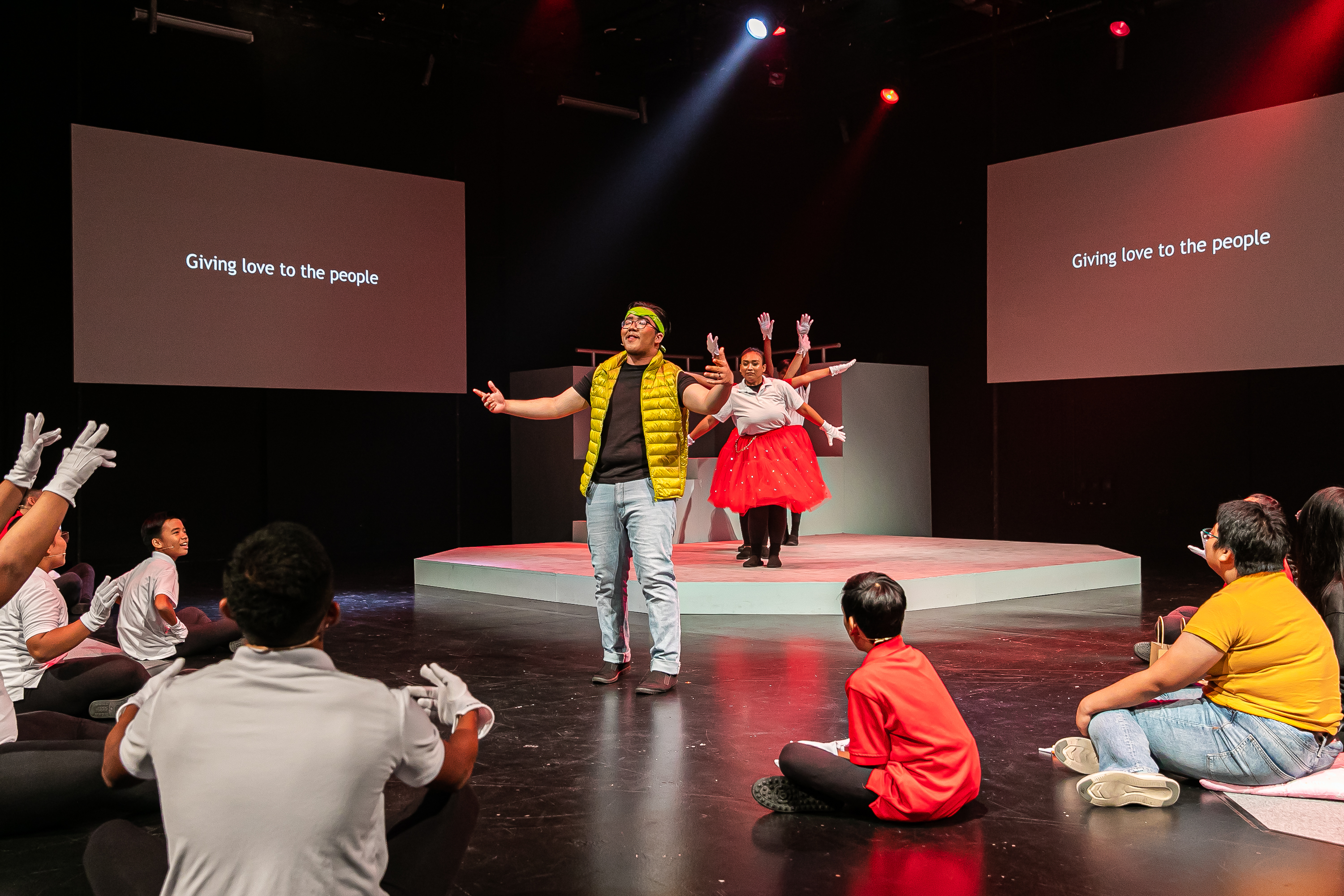 Thinking about the entire process of creating The Block Party, one is impressed how it took 1.5 years, with a cast of non-professional but very dedicated actors to achieve this, and how much work has gone into doing a show that truly matters and comes from the heart. Kudos also, to ArtsWok, the Esplanade and the schools themselves for fully engaging the students in the audience, many of whom were still clad in uniform, having coordinated the buses and initiative to even get these students to come down and watch this performance and expand their perspective on various lives in Singapore. 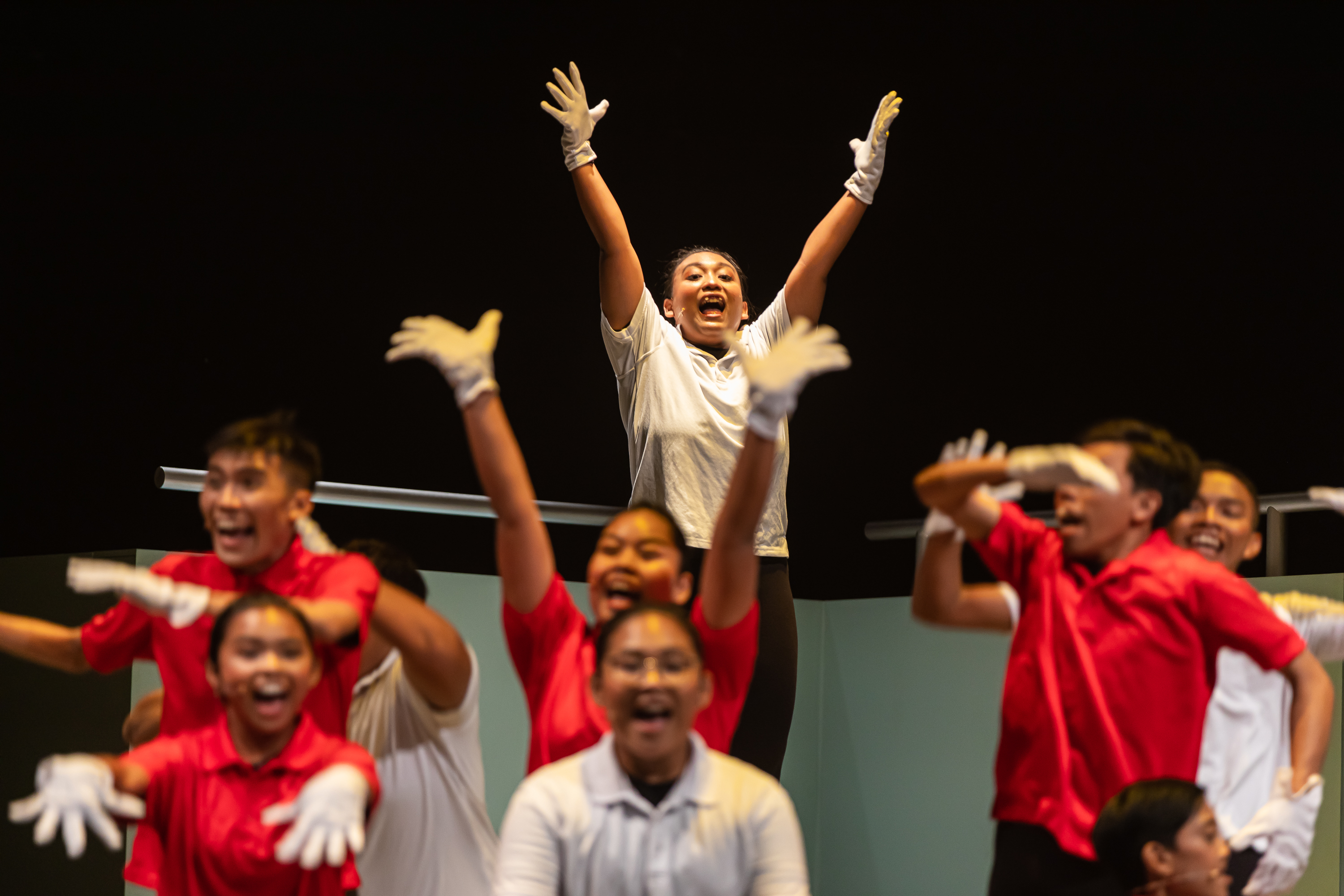 The show draws to a close as the cast leaves the stage and the MP steps down from his seat. Fireworks appear onscreen, and it truly is as if we have reached the end of an observation ceremony. There is the unmistakable air of hope hanging, and we can see the sheer amount of joy from the ensemble and their pride at having put up such a work, including an actor with a cleft lip who still manages to get through each and every one of his lines in the script with clarity. This is a sincere and courageous work that brings out the very best of what the M1 Peer Pleasure Festival is trying to achieve, and that part of what makes good theatre is reliant not on a big budget, but creative direction and a willing, hardworking cast to craft a production that leaves us with the belief that there is a future out there for all Singaporeans, regardless of circumstances.

The Block Party played from 1st to 3rd August 2019 at the Esplanade Theatre Studio.

The M1 Peer Pleasure Youth Theatre Festival 2019 ran from 24th July to 4th August 2019 at the Esplanade. For more information and the full programme lineup, visit their website here