Just how fancy can cinemas possibly get? The answer is: extremely, as Emperor Cinemas proves with their very first outlet in Malaysia. First introduced in 2015, the cinemas have quickly expanded their reach across mainland China and Hong Kong, and finally, have reached out to the region and set up a brand new luxe cinema in R&F Mall, Johor Bahru.

Taking pride in their first-class service, extraordinary interior design, and Hong Kong styled menu, the team is incredibly confident that with this new, never-before-seen cinematic experience in Malaysia, Johor Bahru is about to flourish with even more visitors as they wander over and check out what the cinema has to offer.

Emperor Cinemas are known for possessing a professional, knowledgeable team who have always been well-trained to provide exceptional service to all guests, from theatre managers, to Audio Visual Specialists and Service Ambassadors. Visitors can also look forward to luxurious cinematic interior design, with unconventional interiors when you pass through the doorway.

Examples of this include suspended geometric structures across the entire two-storey cinema, and the overall design which celebrates the various forms of imagination and the possibilities of creativity. Chic and classy, the lobby features a subtle colour palette of grey, silver and bronze to complement the spectacular pendant light above the doorway and the suspended ceiling structures, while the staircase glows with a flight of hidden LED lights. The black hairline stainless steel door to each screening house, and the various shades of blue fabric walls in Hall Type A and the hues of green in Hall Type B all come together as if inviting audiences into another world each time they step into the cinema. 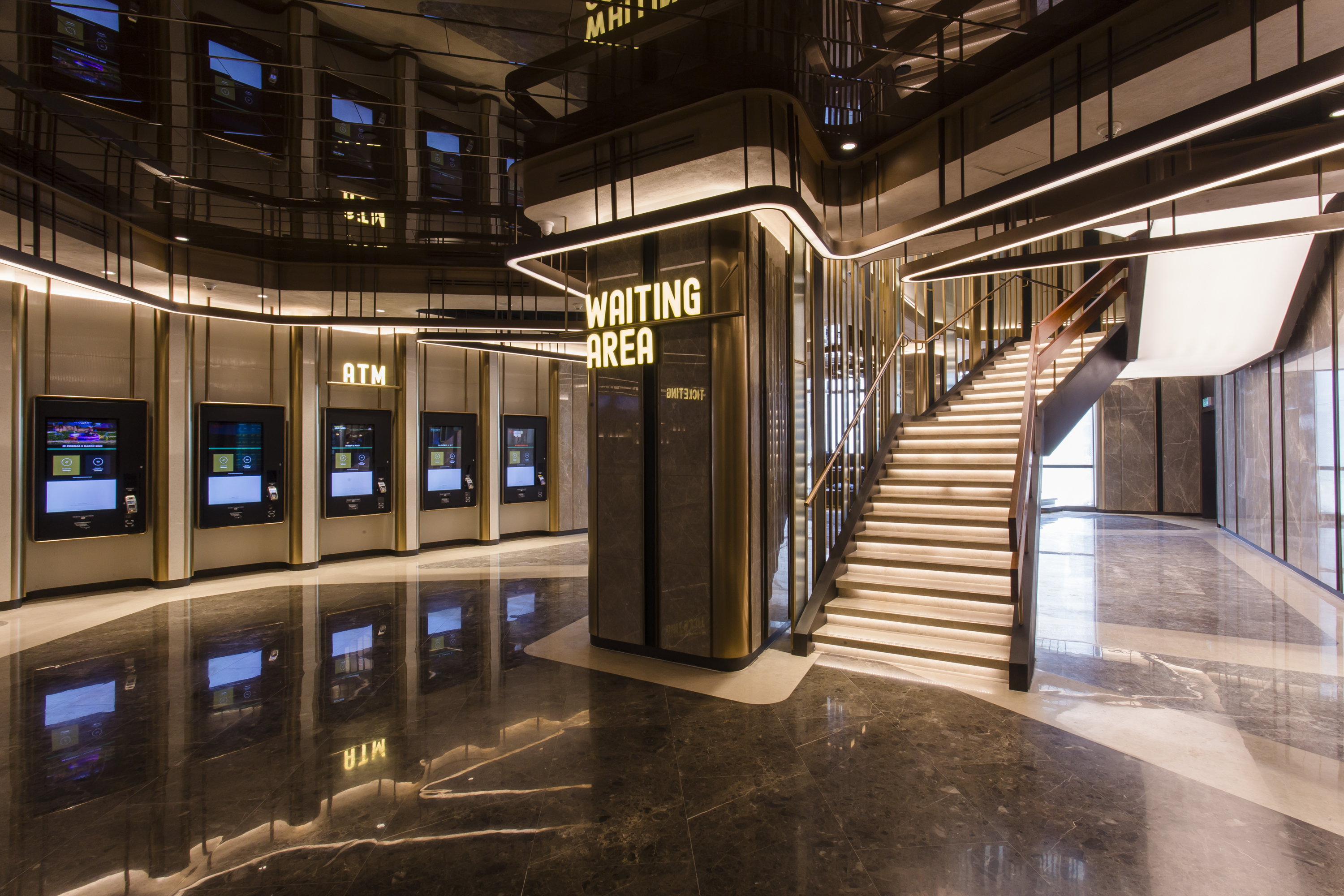 On the food side, Emperor Cinemas goes one step further than the usual popcorn and soda, introducing their gourmet Hong Kong snacks to cinema-goers. The menu includes their signature buttery egg waffles, best topped off with a spoonful of ice-cream. Harkening to the glamorous high teas of Hong Kong, customers can also request for the delicious ice-cream red bean fleecy – a drink is made with adzuki beans, light rock sugar syrup and evaporated milk. Other options include French toast, hotdogs, cheese nachos, crispy popcorn chicken and more, giving all guests a wide variety of choices to pick from, not to mention, the many mojitos and mocktails one can order as well. All of these can be found on the Monkey Cafe on Level 2, and makes for a chill hangout spot even if one isn’t catching a movie.

As for the cinematic experience itself, Emperor Cinemas has spared no expense in ensuring only the highest quality, with a total of 8 halls, 2 of which are Dolby Atmos halls while the remaining halls use a Dolby 7.1 sound system, totalling 745 seats. All seats come with flexible armrests, allowing audiences to adjust according to their needs. “Featuring sofa leather seats, audiences are guaranteed to be delighted with the cinematic experience of high-end comfort and style, and they may even forget that they are sitting in a theatre,” adds Vicky Wong, Director of Administration and Special Projects.

In addition, the halls use the SONY 4K Laser projector system, the first of its kind in Malaysia, with advanced onscreen image quality, with outstanding brightness, high contrast, and superior colour performance. “Cinemas have to constantly raise their game to provide an unmatched immersive experience in both sight and sound,” said Vicky. “We found Sony 4K Laser Projector System ticking all the right boxes for true 4K image quality.”

To assist with long queues and make the entire experience a smooth one from the moment they purchase their tickets, a total of 5 ticketing kiosks and 2 box office counters are available at the cinema to serve visitors. Emperor Cinemas is also providing the sale of e-tickets through their online platform and their newly launched Emperor Cinemas mobile application, where guests can manage bookings and receive the latest news all at their convenience, and even receive a waiver on the service fee, a first in Malaysia. 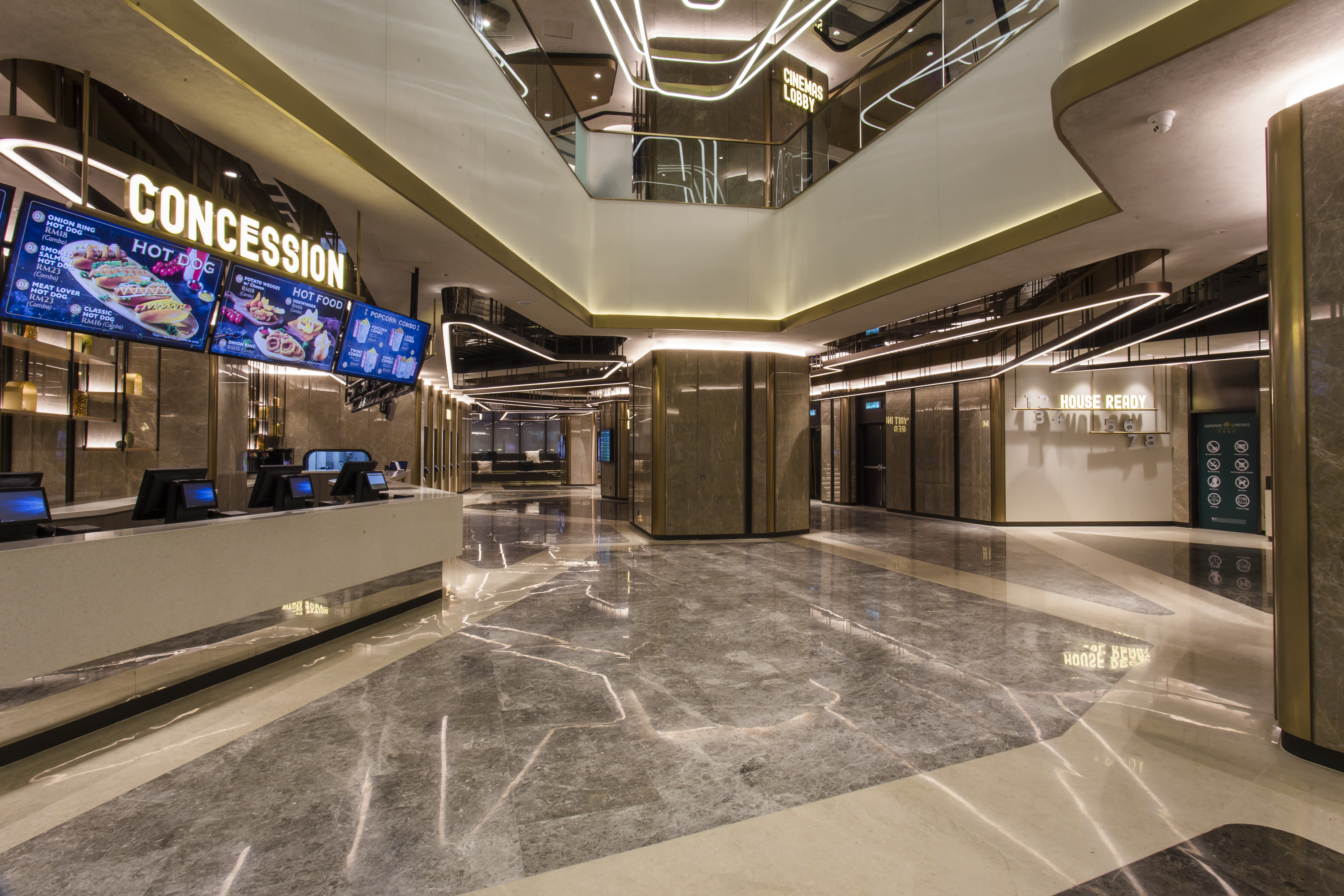 For maximum benefits then, moviegoers are encouraged to join the Emperor Cinemas VIP membership completely free and enjoy a lifetime of exclusive benefits, such as receiving two complimentary tickets on your birthday month, an annual 10% discount on food and drinks, exclusive invitations to member events and more. VIP members can  also accumulate tokens to spend at the cinema and redeem free tickets from the concession counter, all via the app.

Emperor Cinemas also fully intends to position itself as a suitable space to host events, from private screenings to parties. Located just five minutes from JB CIQ, the prime location is sure to attract visitors from both sides of the Causeway, and allows guests the freedom to screen anything from the latest blockbusters to live sports events or even e-sports competitions. Guests are also allowed to create their own themed activities such as birthday parties for kids and adults, family reunions and social gatherings.

Says Alex Yeung, Executive Director of Emperor Group: “I am extremely delighted that ourfirst South East Asia cinema has arrived in Malaysia. Over the recent years, the Group has been keen to expand their presence in the film and entertainment industry by taking a streamlined approach with its diversified business resources, enabling an enhanced viewing experience for audiences across the region.”

Emperor Cinemas is currently in Phase 1 of its release and continues to harbour plans for expansion and improvements in the years to come, along with releasing several more establishments in the region soon. With its flexibility and appeal to the more lux side of cinema, Emperor Cinemas is set to make waves on both sides of the Causeway, orchestrating personalised, smooth experiences that every visitor can enjoy, from the food to the film.