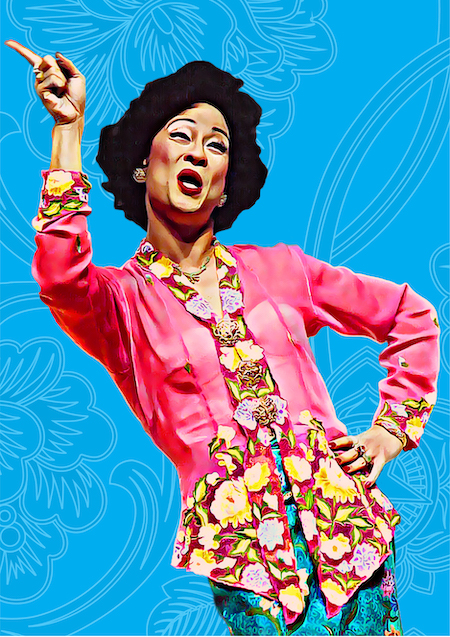 In many ways, Stella Kon’s Emily of Emerald Hill should be considered one of W!ld Rice’s most signature productions. Each time the company has staged it (including as their debut production back in the Jubilee Hall in 2000), W!ld Rice artistic director Ivan Heng has risen to the iconic role, one that he may perform in drag, but embodies utterly in speech and mannerism. With this 2019 production of Emily of Emerald Hill, Ivan once again dons the sarong kebaya (designed by Lai Chan and Raymond Wong) to transform into Peranakan matriarch Emily Gan, welcoming audiences into her extravagant Peranakan mansion for the last time.

Eight years on from the last time he’s stepped into Emily’s shoes, Ivan is now also eight years wiser and more experienced than ever before. Throughout the performance, there is a sense of assured maturity in Ivan’s performance as his body moves with a matriarchal energy to it, commandeering and fully comfortable in this space. Under director Glen Goei, there are also attempts to introduce ‘immersive’ elements to it, with more audience interactions and participatory elements. 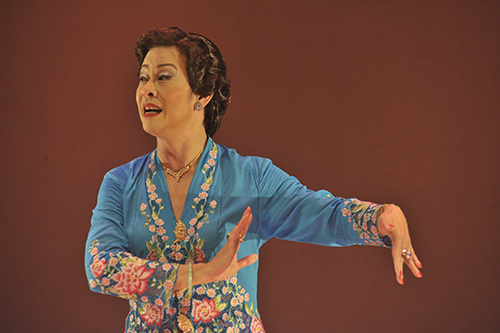 With Peranakans known for their fussiness over details such as punctuality, latecomers to the show are singled out for their tardiness and yelled at by Emily. In an attempt to teach audiences more about Peranakan culture, at various points in the show, Emily breaks from the narrative to meticulously ‘prepare’ us to make pineapple tarts by ensuring we had the right ingredients, and even shares the recipe to prepare her signature ayam buah keluak. As culturally informative as these are, these often distract and deviate from the play, breaking the flow of the monologue. Remove each and every one of these so-called ‘immersive’ aspects, and the play would be much improved as a result. Yet it is undeniable that Ivan seems perfectly in his element here, always maintaining character as a proud Peranakan woman. As the doors are flung open, Ivan as Emily enters the space, fully made up and in a perfectly coiffed wig as she dances a duet with an invisible partner to Sinatra’s ‘Just The Way You Look Tonight’, as if wishing for someone to fill the absence. 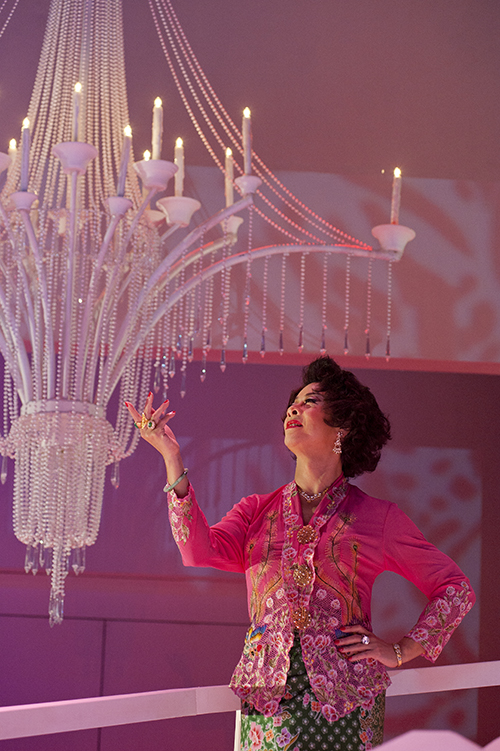 For set designers, W!ld Rice’s new theatre is certainly a challenging one. Audiences may be used to W!ld Rice’s big, lavish sets, but here, the limited space will be a new obstacle to overcome. Onstage, Wong Chee Wai’s faded white house interior acts as a canvas for Brian Gothong Tan’s projections, in an attempt to reflect the grandeur of the Emerald Hill mansion. Clearly visible strings lining the mansion feel like the very threads that are holding it together, symbolic of the family ties that similarly hold the story together, and how easily it can snap and tear that same family apart in an instant. 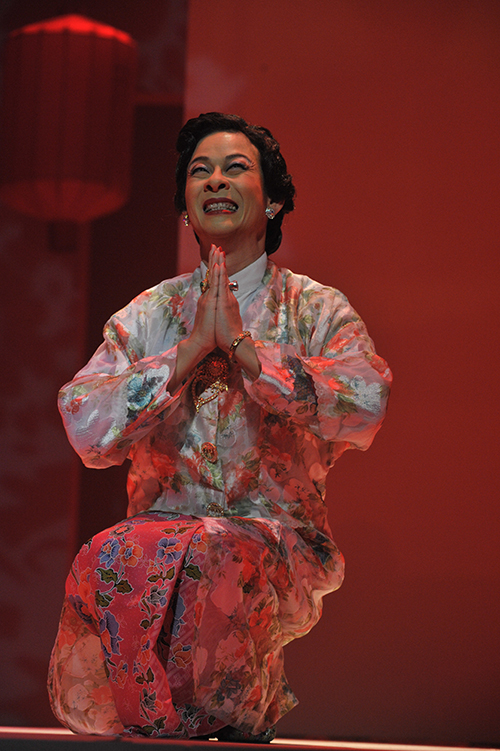 Revolving around the rise and fall of the eponymous Peranakan matriarch, Emily takes us on a vivid journey through her life, starting from her humble beginnings as a young girl coming from nothing. Betrothed at a young age, we watch as Emily recounts her marriage, lanterns descending from the ceiling and the lights bathe the theatre in red. A lucky and auspicious colour in the context of marriage, suggesting love and passion, red also suggests anger, danger and a flurry of intense emotions. As Emily, Ivan captures that complicated concoction of emotions and vulnerability in his expressions, his movements, and his voice, and we feel for the character in all her complicated feelings in this moment. 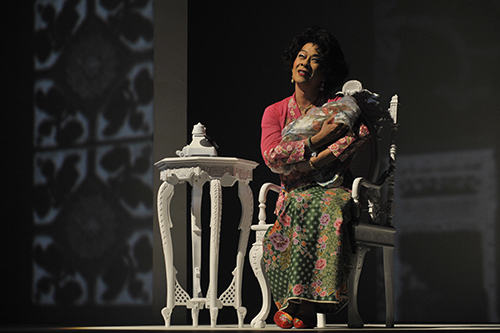 Alone and afraid, we root for Emily as she works her wits to get into her mother-in-law’s good books, a position anyone can relate to, as we’ve all been alone at some point in our life and simply want to find solace and a friend within a new space and home. There is grim determination and genuine effort on her part as she attends to her mother-in-law’s every need, even offering a massage for her tired muscles, one that results in a victory we cheer for. Emily then delves into another ‘immersive’ aspect, teaching us about the culture of the Peranakan patchwork as she gets the audiences in the front row to bring out a basket of cloth from under their seats, explaining to us the significance a piece from a cheongsam or kebaya could hold to a family’s history. 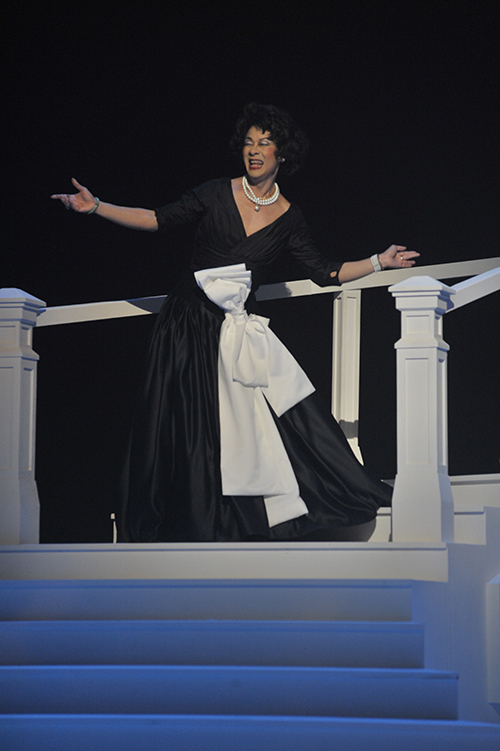 Hitting the high point of Emily’s life, there is sleek direction as she ascends the stairs to change out of her sarong kebaya and slip on a chic black dress onstage. As she descends in her new outfit, it is as if there is a change in scene and mood, as the projections now depict the glitzy sight of stars while she goes about ensuring everything in the house is in its place, before introducing us to a grand Emerald Hill dinner for her son Richard’s 20th birthday. We feel her exuberant joy emanating off her with every step, and nothing seems like it can possibly go wrong when she bids Richard goodbye at the harbour as he leaves for Salisbury for his studies. 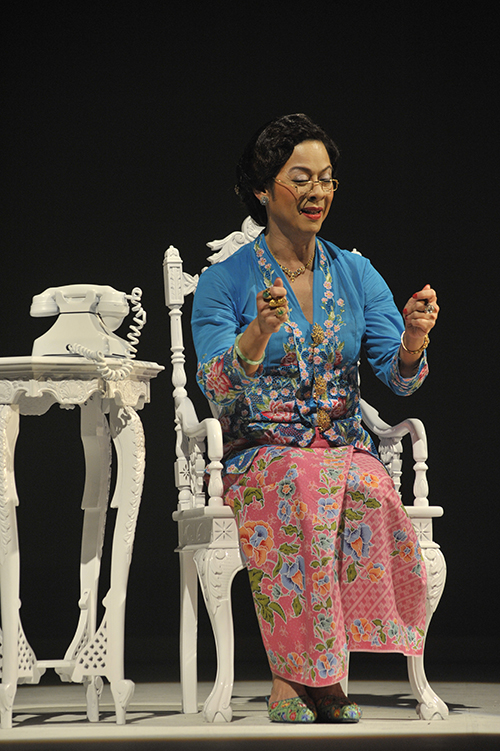 All too quickly however, her fortunes take a turn for the worse as she visits her son in England after receiving a distressing letter that he wants to drop out. Emily as a character represents the worst fears a mother can possibly have – being a bad mother to her only son. When she arrives in Salisbury, her tone is assuring, promising him that everything will be fine. Yet there is an undeniable element of coercion as well, her smile and comforting words hiding something far more ferocious as she piles her own expectations on Richard, steering him towards a narrow path of what she deems as ‘success’ with a combination of guilt-tripping and berating for his rashness. There’s an undeniable familiarity to this style of maternal manipulation that makes the scene hit hard, one that ends only in tragedy for Emily as she loses her son forevermore. 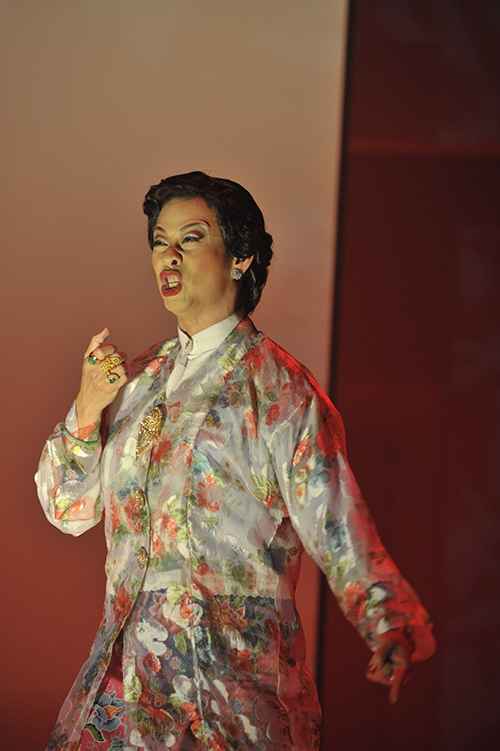 From here, it’s a rapid fall downhill that sees her husband leaving her as well, and soon, everyone else she cares about. At this point, Emily feels older, no longer comfortable in her solitude, but utterly alone as the empty mansion seems to swallow her up. No food nor party can cheer up this once glorious matriarch, and as she sits alone in the corner on her chair, The lights dim and begin to close in on her, and it feels almost as if the space itself is shrinking all around her. Ivan delivers a heart-wrenching performance as he brings out Emily’s loneliness, fragility and sorrow in full, encapsulating the weight of the world taking its toll on her after all these years as she emanates the energy of an impossibly defeated mother as her grief sinks in over all that she’s lost. 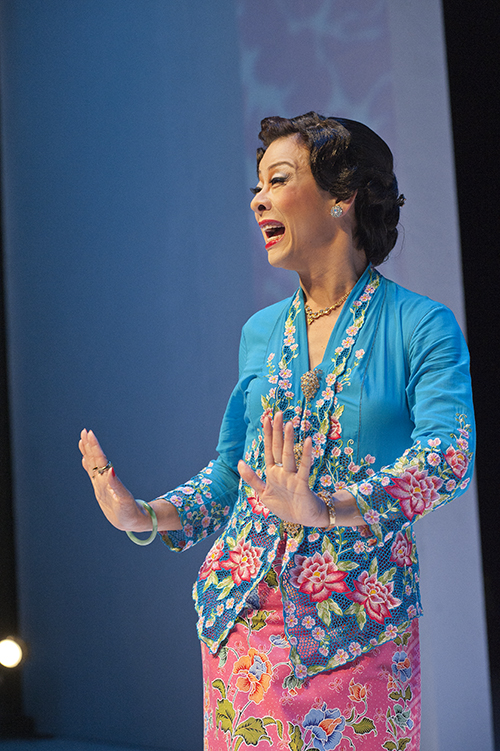 Leaving just as she came with a little joget joget to the same Sinatra tune, Emily Gan exits to a stunned silence at this tour de force of a performance, before Ivan Heng returns for his curtain call, to thunderous applause. This new version of Emily may be rife with tricks in an attempt to update it for a ‘new’ audience, but as Ivan’s performance shows, Kon’s script remains as powerful as it was when he first performed it. All it takes to truly bring out its essence is a seasoned actor who knows exactly how to work each line to maximum effect. With Emily, Ivan has pushed himself to his physical limits with this run, but as tired as he may be, there is a hope that sparkles in his eyes as he takes in all that W!ld Rice has achieved over the last 20 years, and seems to know with certainty that their star can only continue to rise.

1 comment on “Review: Emily of Emerald Hill by W!ld Rice”