Gravity defying, intricate choreography marrying the discipline of ballet with the richness of Cuban culture.

Almost certainly one of the greatest dancers to have emerged from Cuba, Carlos Acosta is a modern legend in the world of ballet and contemporary dance. The first Cuban principal dancer of London’s Royal Ballet, Acosta’s meteoric rise is nothing short of spectacular, and as the opening show for this year’s da:ns festival, promised to showcase intricate, innovative choreographies with his company’s Singaporean debut.

Acosta Danza was created as a means for Acosta to showcase Cuban culture through dance. Combining the richness of Cuban history, imagery and practice with the discipline and form of classical ballet, what arises is an art form with no compare. Across all four works, dancers leap through the air, glide across the stage and display almost superhuman physicality with lithe, flexible bodies, perfectly in sync with one another as they perform each imaginative piece.

Opening with Goyo Montero’s Alrededor No Hay Nada (There is Nothing Around), 10 dancers enter an empty stage, while we hear the voices of Joaquín Sabina and Vinícius de Moraes read their poetry. Donning blazers and bowler hats, a number of duets are performed (to dramatic lighting, also by Montero), as we watch them work their way through a series of movements that shows off their onstage chemistry, versatility and comfort in their bodies.

As an introduction to Acosta Danza, it’s a sleek one, as they move to the rhythm of the voices, their movements smooth, fluid no matter if they’re lifting, posing or stretching, with every moment deliberate, a work of art. Most impressive is when they work not as couples, but as an entire group, be it gathered in a circle to witness a single dancer in the centre performing a solo, or tossing one of them dancer into the air, their arms outstretched as one before catching her. Throughout, they maintaining the momentum and keep going, the voices rising to a climax as they are joined by a steady backing track, the dancers living and performing their best as if no tomorrow. ‘There is nothing around’, as its title suggests, but that is no matter when the performance is all one needs to see the brilliance of Acosta Danza.

With Faun, Sidi Larbi Cherkaoui takes inspiration from 1912 ballet by Vaslav Nijinsky, L’après midi d’un faune, set to Debussy’s original score with additional music from Nitin Sawhney. Performing to a backdrop of a darkened forest landscape, Carlos Luis Blanco awakens as the titular faun – lithe, long and primal as he moves. Displaying taut strength and an elastic flexibility, Blanco is almost playful as he explores the surrounding woods, curious but confident. Zeleidy Crespo then similarly awakens as a forest nymph, mirroring Blanco’s actions as she too wanders the wood all alone, similarly agile, sleek and strong as she traverses the stage, gymnastic and athletic.

When the two meet, there is an immediate kinship and recognition in their shared desire for each other, the lighting by Adam Carree bringing daylight to the forest as the two dancers touch hands and dance in unison. Uncertain at first, then braver, their sensuality only enhances the passion that runs through the piece – slow but controlled, exploring each other as they perform yoga-like poses and stretches, keeping perfect balance as they respond to each other, like graceful animals. The movements are lyrical, and Faun sees both dancers eventually achieving perfect harmony as they become a single being, sliding in and out of each other’s space, channeling the mysticism of the forest and harnessing the power of myth to result in a thoroughly affecting work – a spell that both Crespo and Blanco have cast over us as these mythical creatures of the wood.

In Paysage, Soudain, La Nuit (Landscape, Suddenly, The Night) by Swedish choreographer Pontus Lidberg, the company of dancers returns to the stage as they bring out the romance of the night. But make no mistake – this is no slow dance, but a pulsating rumba, quintessentially Cuban, that sees the dancers twirling and whirling across a field. There is exuberant, innocent energy emanating from each of the dancers, displaying an electric joy as they dance with each other, hand in hand and thrusting themselves towards and away to sweep across the stage.

The lights by Patrik Bogårdh seem to simulate the passage of time as we go from night to day to night again, dramatic as backlight from beyond a row of grass bathes the dancers in a sharp chiarascuro. There is young love burgeoning everywhere we look, the dancers seething with desire and want as they gaze into each other’s eyes, growing stronger with each passing moment. Coming together as an ensemble and syncing their movements is once again one of Acosta Danza’s greatest strengths, and they cut through the air and slide across the stage effortlessly, always beautiful, full of hope and possibility as they embark on a journey together, swinging across the stage as they search for each other under the moonlit sky, smiles emerging on their face each time they unite. 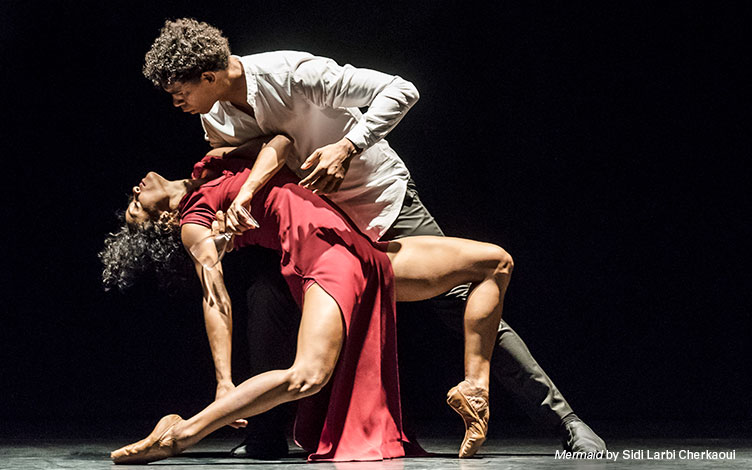 Ending off with Sidi Larbi Cherkaoui’s Mermaid, one could practically hear the gasps in the audience as Carlos Acosta himself came onstage to guest star in this piece, alongside contemporary dancer Marta Ortega in this mysterious, ethereal duet. Clutching an empty wine glass in her hand, Ortega is clad in a red dress by Hussein Chalyan, with two ‘tails’ that transform her into a half human, half fish, as she stumbles about the stage. Yet she never falls, always catching herself and balancing gracefully on pointe, arching her back and supported by Acosta while a vocal, soulful folk Korean song by Woojae Park plays, ebbing and flowing like ocean waves, which both dancers move to. Ortega’s expression is one of confusion, almost as if she is semi-conscious as she slides across the stage, a fish out of water on dry land.

Always, Acosta is there to try guiding her along the way, yet this relationship is one-sided, doomed to end in failure. Acosta, as the skilful dancer that he is, is always pre-emptive of Ortega’s next move, his face full of wonder and always one step ahead as he lowers himself to collect Ortega’s body as it falls, or prop her up again as he pulls her to her teetering feet. For a moment, things seem to click, as Erik Satie’s ‘Gymnopedies’ begins to play, as if both Acosta and Ortega are in a dream or fantasy, both of them in sync as they dance with each other, perhaps a memory of happier days as they finally connect, defying gravity almost as he lifts her in triumph, and they seem, for a moment, happy. But this is short-lived, as Ortega eventually exits the stage, aware that she no longer belongs in this world. Acosta is left alone and defeated, a single spot shining down on him, a steady stream of water dripping down from the ceiling as the lights fade to black.

For their debut performance in Singapore, Acosta Danza has certainly left quite the impression, showcasing brief but impactful pieces. With every piece imbued with emotional depth as each set of dancers take to the stage and showcase pure skill, grace and elegance with every move, the length of applause after each piece is all the evidence one needs to see just how brilliant this company is.

Acosta Danza plays on 10th and 11th October 2019 at the Esplanade Theatre as part of da:ns festival 2019. Tickets available here