When the hard truths are revealed, can we separate art from the artist?

The truth can be incredibly difficult to keep under wraps. J.K. Rowling herself, author of the hit Harry Potter series, published her name using her initials due to the impression that her target audience of young boys would be unwilling to read a book written by a woman. And again, with The Cuckoo’s Calling, she attempted to write under the pen name Robert Galbraith for a sense of liberation, only to be outed mere months after its publication. In this day and age where anyone and everyone can easily be found with a cursory Google search, it’s just about impossible to hide a secret identity.

And so it is that in Heather, playwright Thomas Eccleshare takes that idea to its logical extreme, and imagines what it might be like if an author hides their true identity not out of vanity, but because of a far darker secret they must mask. Making its Singapore premiere, Adeeb Fazah directs actors Karen Tan and Andy Tear in this mindbender of a play as part of his residence presentation under the Gateway Artist-in-Residence Programme. 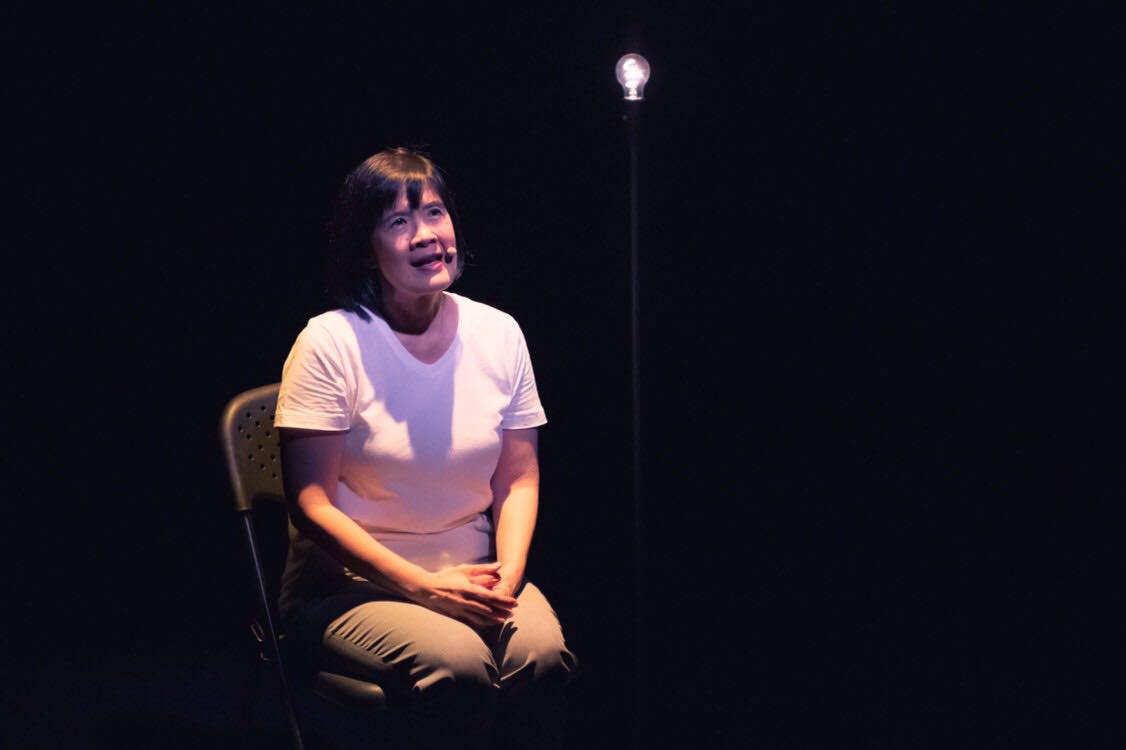 Running at just an hour long, Heather opens on an exchange between Harry and Heather, a literary agent and aspiring author via a series of e-mail exchanges over a number of years. The e-mail exchange chronicles the process of Heather’s debut novel, a Harry Potter-type fantasy series titled Greta and the Magic Pen, as it goes from manuscript to bestseller to hit film adaptation, with an entire trilogy planned for it to keep riding on its success. 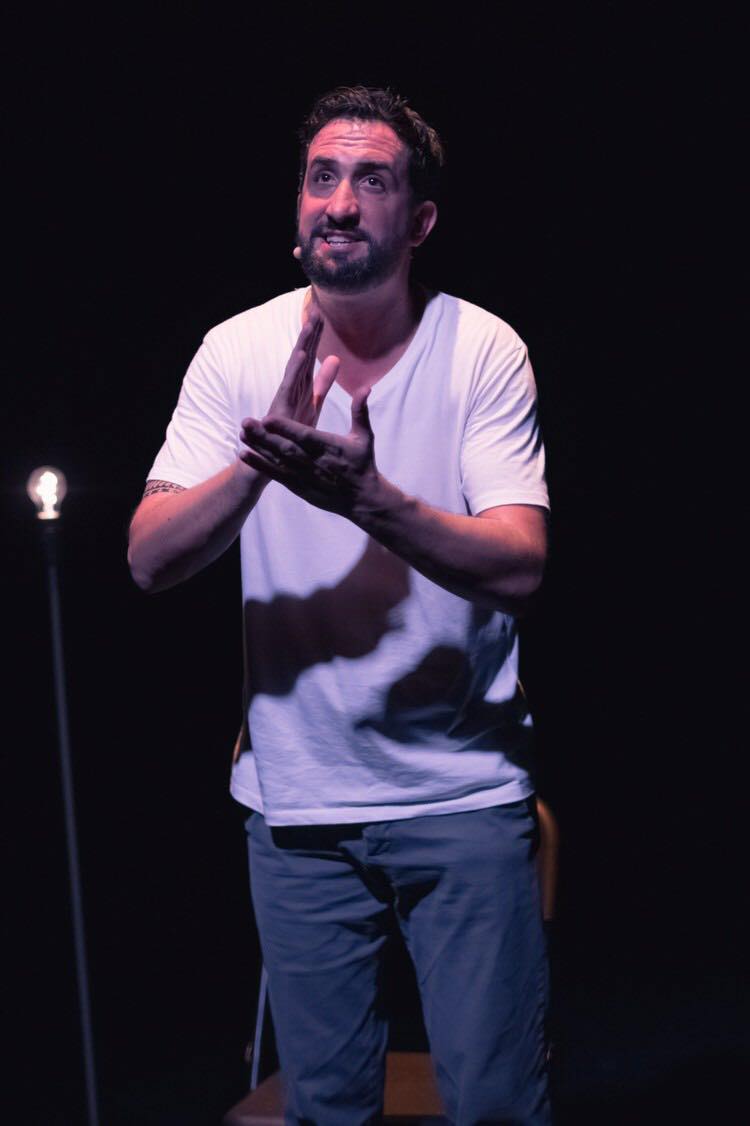 Each seated separately from each other, initially illuminated only by an incandescent light bulb, both Harry and Heather’s faces are bathed in shadow, making it hard to make out who they are or what they’re expressing at first. Further adding to this blurring of identities is how both characters are dressed in identical outfits – plain white tees and pants. The writing here is also deliberately confusing, almost like a tongue twister with the way Heather and Harry sign off with varying degrees of “XXs” and reducing their name to just “H”, muddling who’s the sender and recipient at any one time.

As Heather’s success rises, so does the demand to know her true identity, driving her to build excuse upon excuse of not making a public appearance until finally, she is coaxed to tell the truth – she’s done something truly awful in her past, leading to public outcry, falling book sales and above all, a rift between Heather and Harry in the leadup to the publication of the final book in the trilogy. 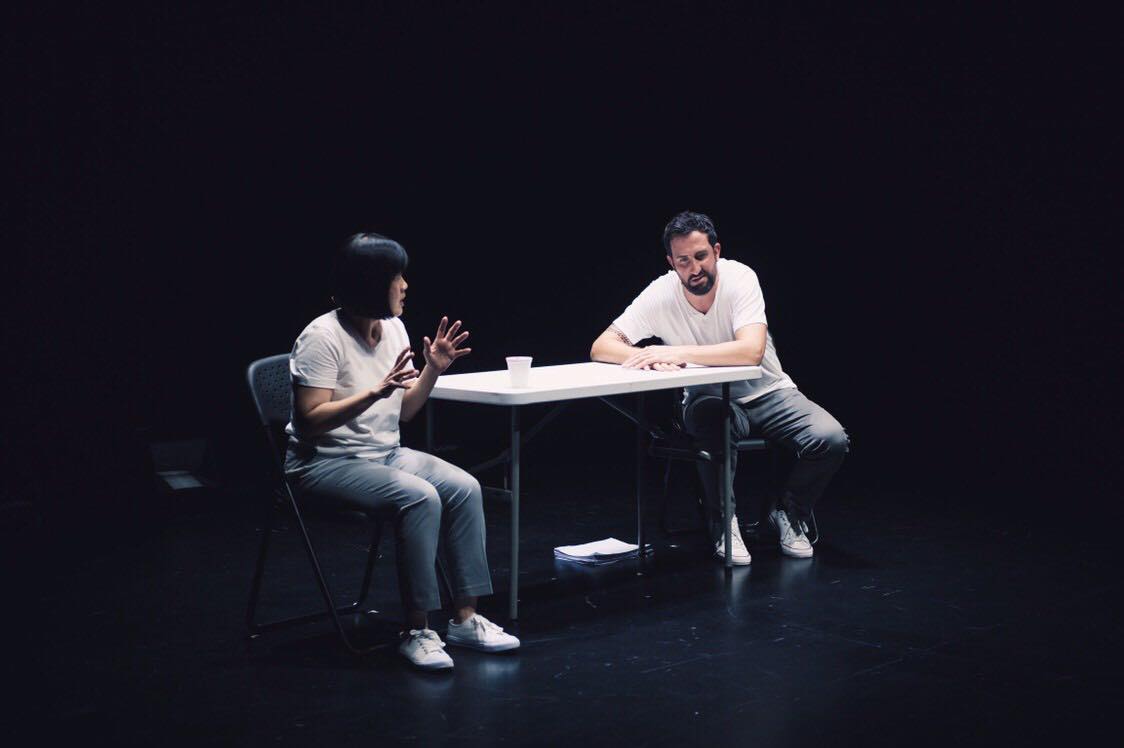 When the two finally meet face to face, the bleak tension in the room is evident as they stare each other down, seated across each other at an empty table, never touching. As Heather puts it, in a rather clever metaphor from Eccleshare, the magic of books is that there’s an image we each form in our heads of the characters, but put that to screen, and the character and impression we had dies, replaced by the actor playing them instead. Karen and Andy capably keep up the pacing of the conversation here, almost like a verbal sparring match as Heather and Harry argue over the former’s revelations, the suffering it’s caused Harry, and the sheer disappointment at the lies that formed their agent-author relationship. 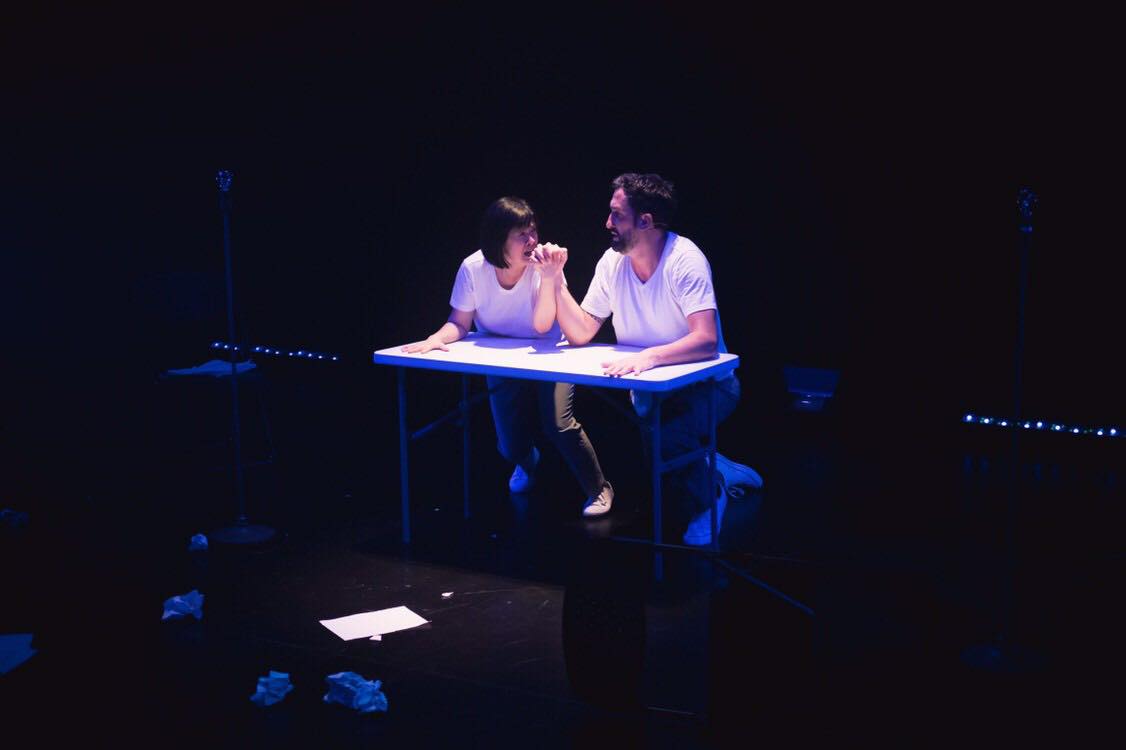 But the thing about Heather is, it’s a play that doesn’t ask us to forgive, instead one that merely asks us to appreciate art for what it is. As hard as it is to turn a blind eye to one’s sins, Heather never spends too much time on Heather’s crime itself, but Harry’s struggle to see Heather the author and Heather the criminal as the same person. If anything, it is the final segment of the play that indeed shows the two Heathers can be seen as different entities, as Harry reads the final book out loud and the stage transforms into a thrilling, dramatised rendition of the text, as if the words came alive before our eyes. 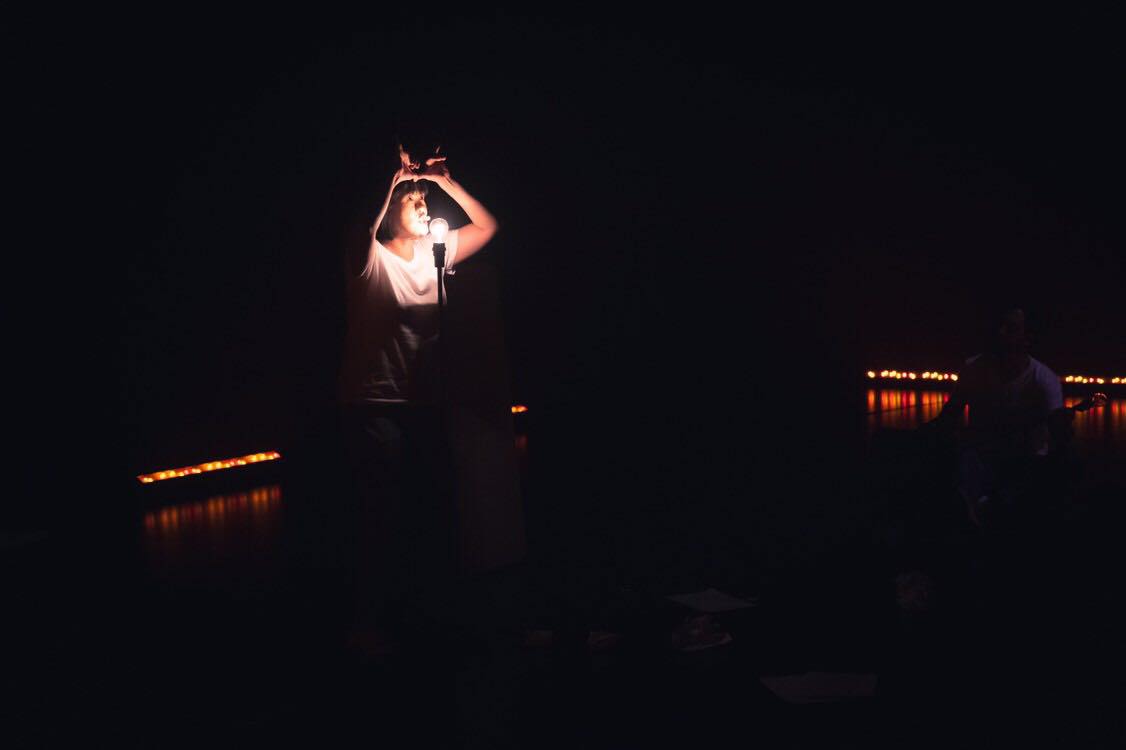 Lighting designer Petrina Dawn Tan has put in some of her best work this year for this production, and coupled with Ng Sze Min’s sound design, metamorphoses the black box into a sprawling, danger-ridden cave, where an epic final battle between mages is waged. Director Adeeb has done well to showcase a completely different side to both characters here, with both Karen and Andy using table, chairs and paper to evoke our imaginations and see this fantastic scene unfold before our eyes. Thanks to Eccleshare’s rich descriptions and thematically-relevant plot, this segment feels powerful, urgent, and above all, the proof one needs that art can stand apart from the artist. 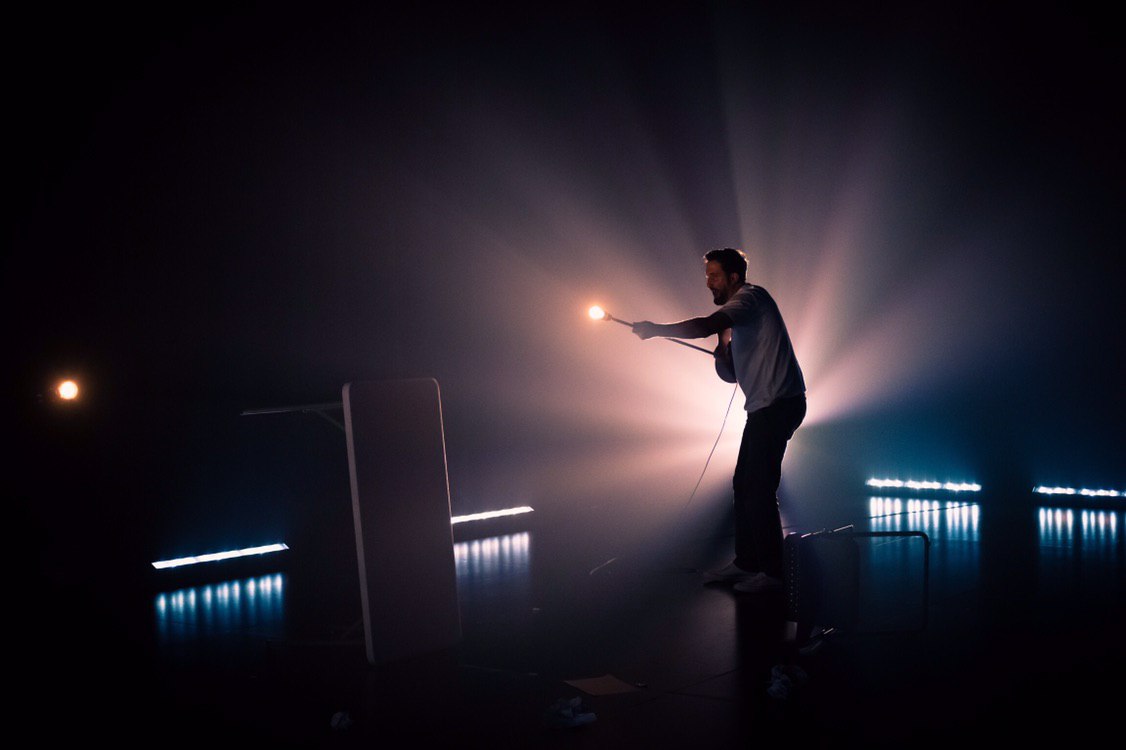 Heather not only shows the power of art as a means to remake one’s identity and redeem one from the darkest of places, but also works as a piece that shows director Adeeb’s versatility and growth over his time under mentorship of Samantha Scott-Blackhall. Punchy, poignant and thought-provoking, this is one book you shouldn’t be judging by its cover.