In the grand tradition of the Singapore Writers Festival (SWF), the ever-popular Festival Debate segment saw a full house at the Arts House Chamber, a historically appropriate venue (as a former space for Parliament to debate policies) to stage it. While still ostensibly taking on the same format as previous editions, something about this edition felt somewhat different, in part perhaps because of the motion being grounded in something immediate, an already hotly debated point of discussion – “This House Believes That Men Are Ruining Feminism”.

Chaired by local literary drag queen Ashley Fifty, while the debate still had strong elements of comedy, these felt powerfully, politically charged thanks to the topic, and the all-female panel was diverse in background and views, well-prepared, and each made compelling arguments. 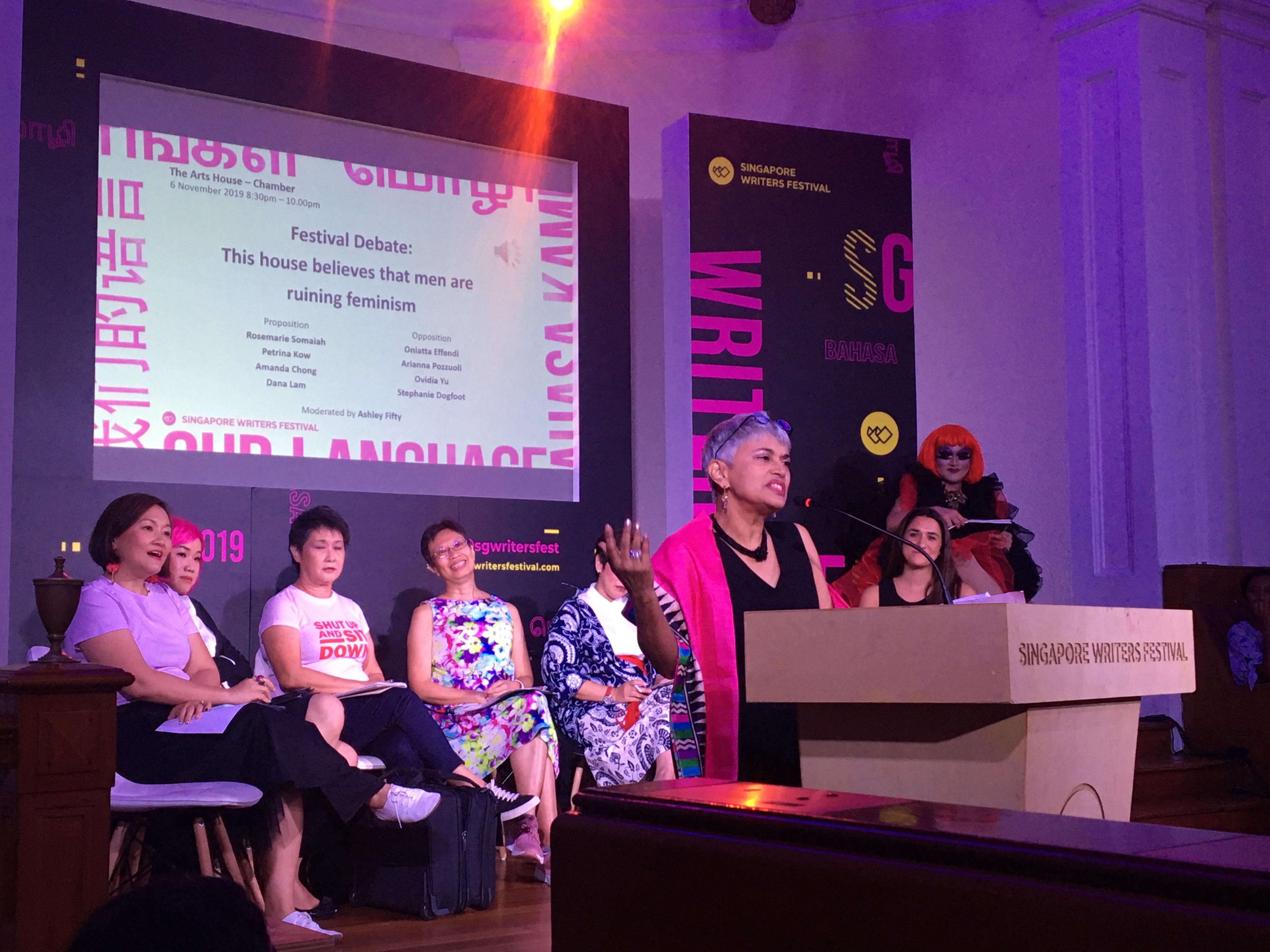 The debate opened with storyteller Rosemarie Somaiah from the proposition team, playfully referring to themselves as the ‘dick-bashers’ but quickly acknowledging that life honestly is hard without men. Calmly sharing a series of anecdotes about her own family life and experiences, Somaiah set the tone for the prop that much of the time, the law wouldn’t bring justice until we strive for it, and the often difficult patriarchy that women face up against. 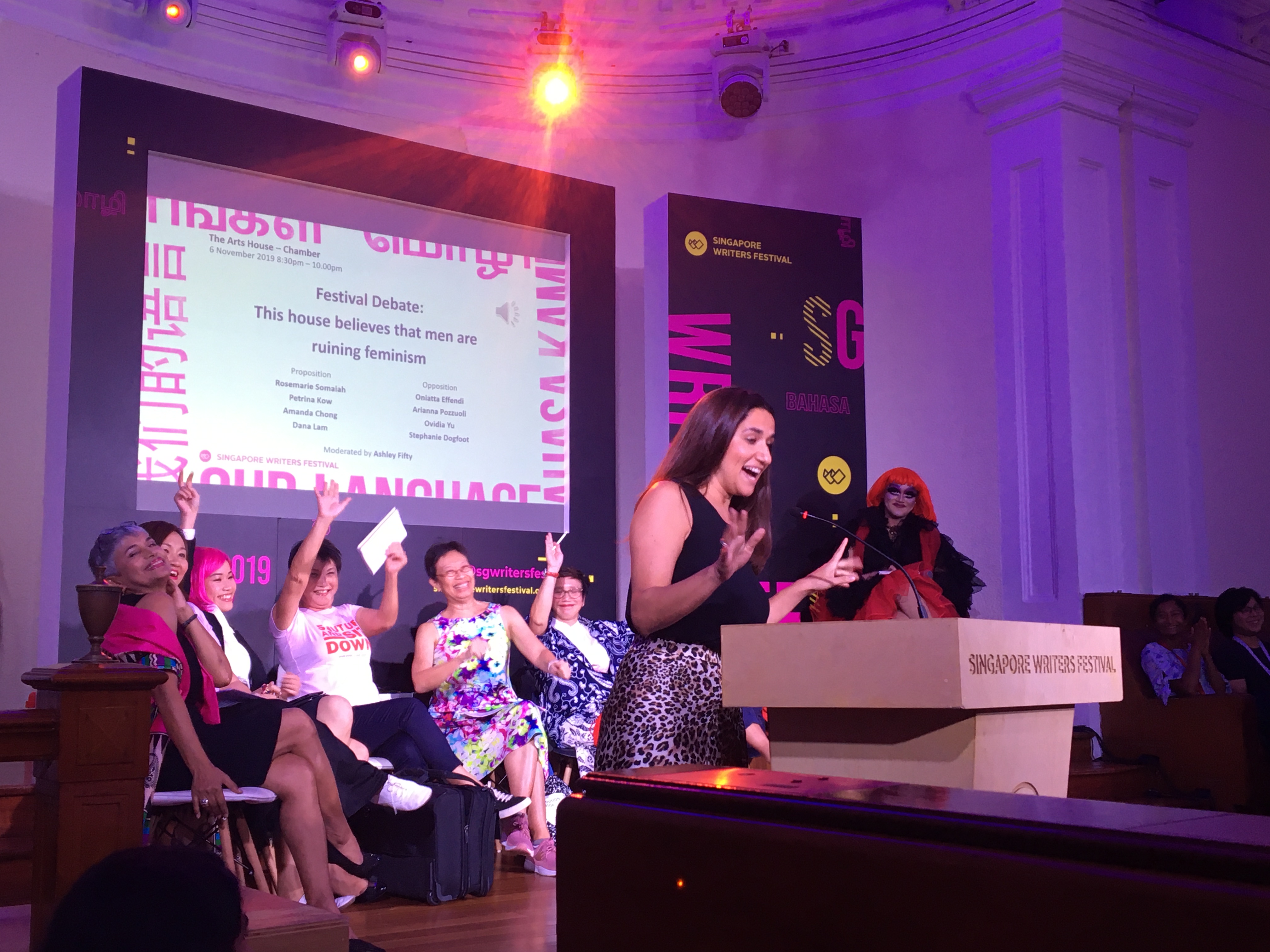 Opposite her, opening for the opposition team was spoken word poet Arianna Pozzuoli, using her literary know-how to deliver a fierce statement laced with strong metaphors and effervescent energy. Performative, witty and fun, Pozzuoli speaks of not being about bra burning anymore (they’re expensive, after all) and targets the very phrasing of the motion, stating that one cannot simply ‘ruin’ feminism like stomping on a sandcastle. 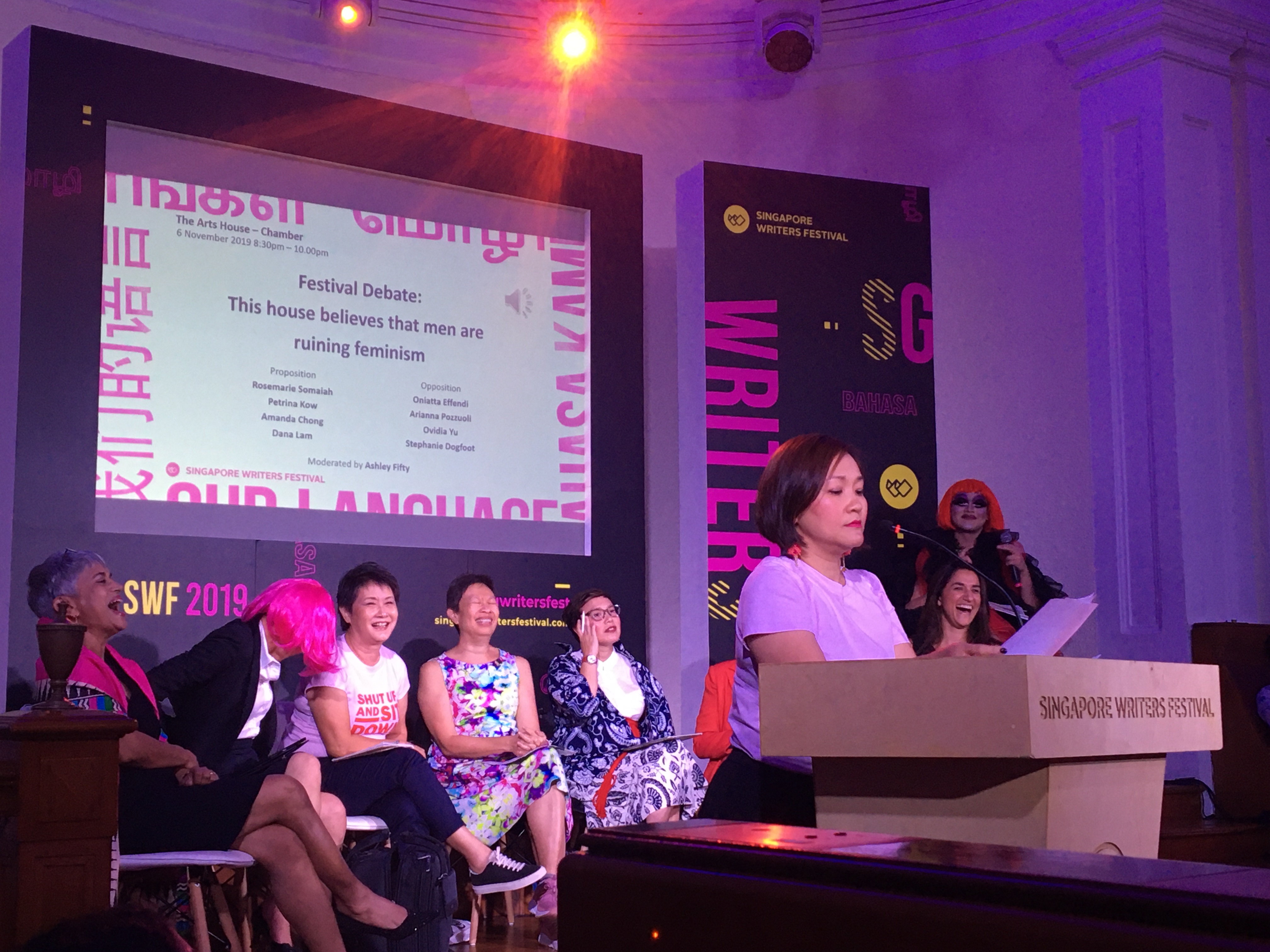 Equally compelling however was Petrina Kow, next in line on the proposition team to take to the stand. A balanced argument with effective wordplay, Kow also acknowledged that while men have ruined feminism, there was still room to change, fully armed with solutions to the problem. Kow demonstrated the brilliant ‘dua lan pa kiap’ – a jumbo laundry peg used to ‘kiap’ men if they ever went too far, along with the easy to remember motto ‘get out of the way’, sticking in our heads as it was repeated throughout. With her ’90 Day Lan Lan Leave’ policy, she suggests men spend 90 days going through what women do, explaining her reasoning clearly, concisely and entertainingly, and gave what was one of the most memorable statements of the night. 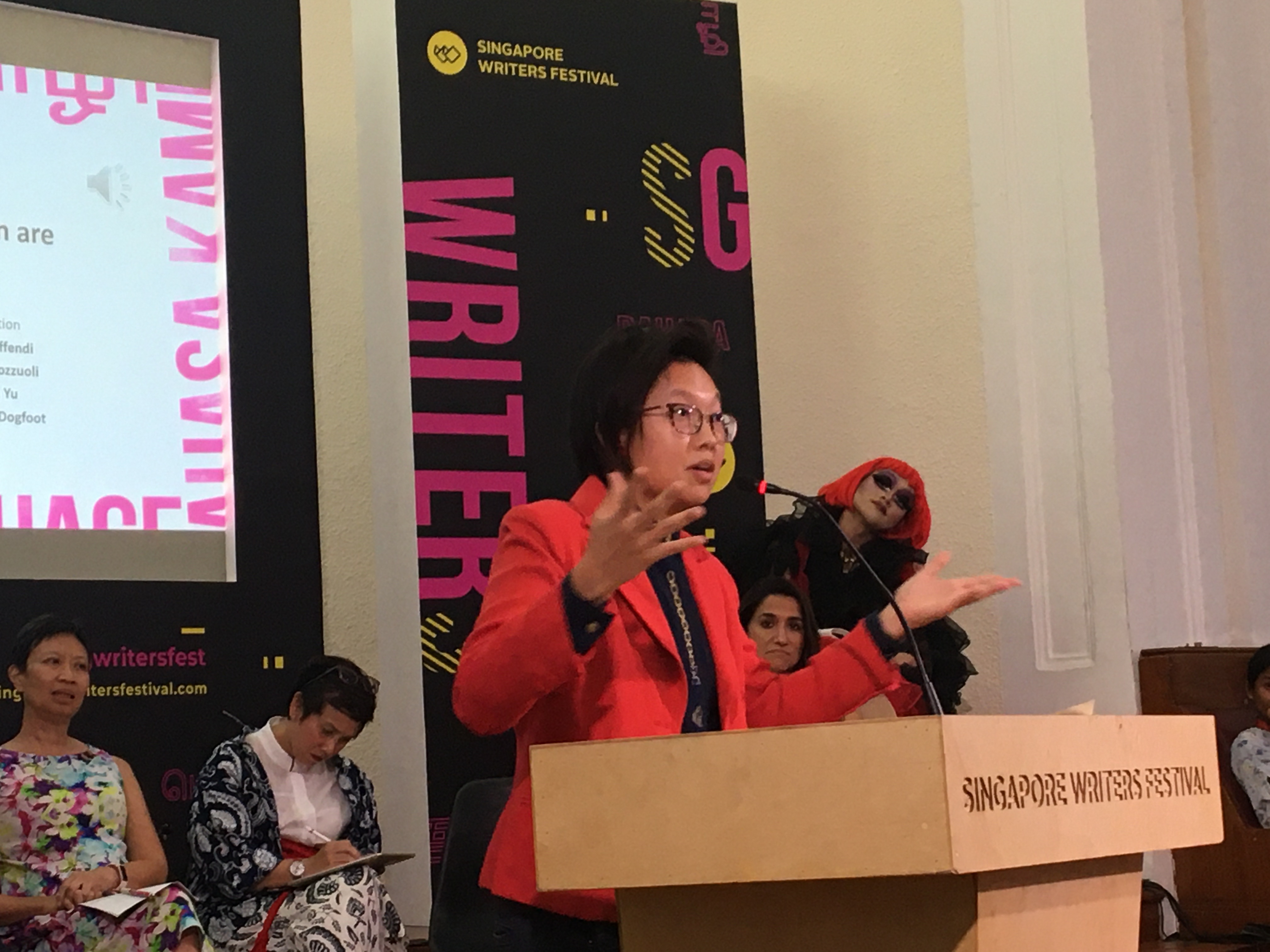 Poet/Comedian Stephanie Dogfoot from the opposition team then took to the stand, arguing on the basis of ecology that one cannot simply bash men, much like how the world still needs flies and tapeworms, as much as they prove to be annoyances. As a non-binary person herself, she looks within herself and employs the argument of intersectional queer theory, calling herself out for her privilege and that as much as men cause problems, so do women, and to move forward, we must band together instead. 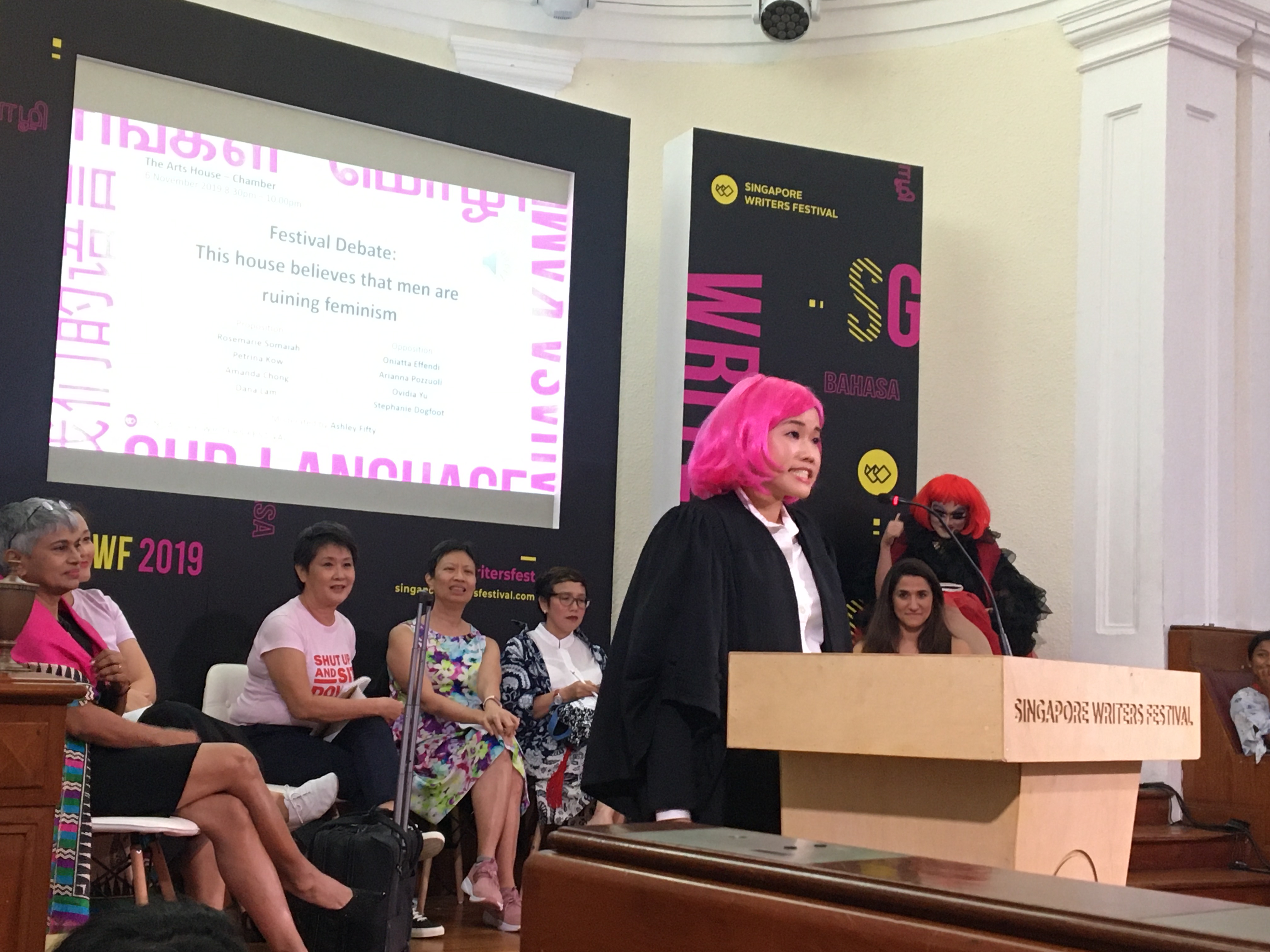 Lawyer/Poet Amanda Chong, dressed in her lawyer garb and a pink wig, ready to go full on dick-bashing and to smash the patriarchy. As violent as all this sounds, Chong brings it to the table with her own experiences of gross men sliding into her Instagram DMs, and the many recent cases of perverts in NUS (and her own experiences having dealt with sex crimes for 6 whole years). Yet she blames not the men themselves, but how they’ve perpetuated the systemic oppression of women with the patriarchy, before resting her case. 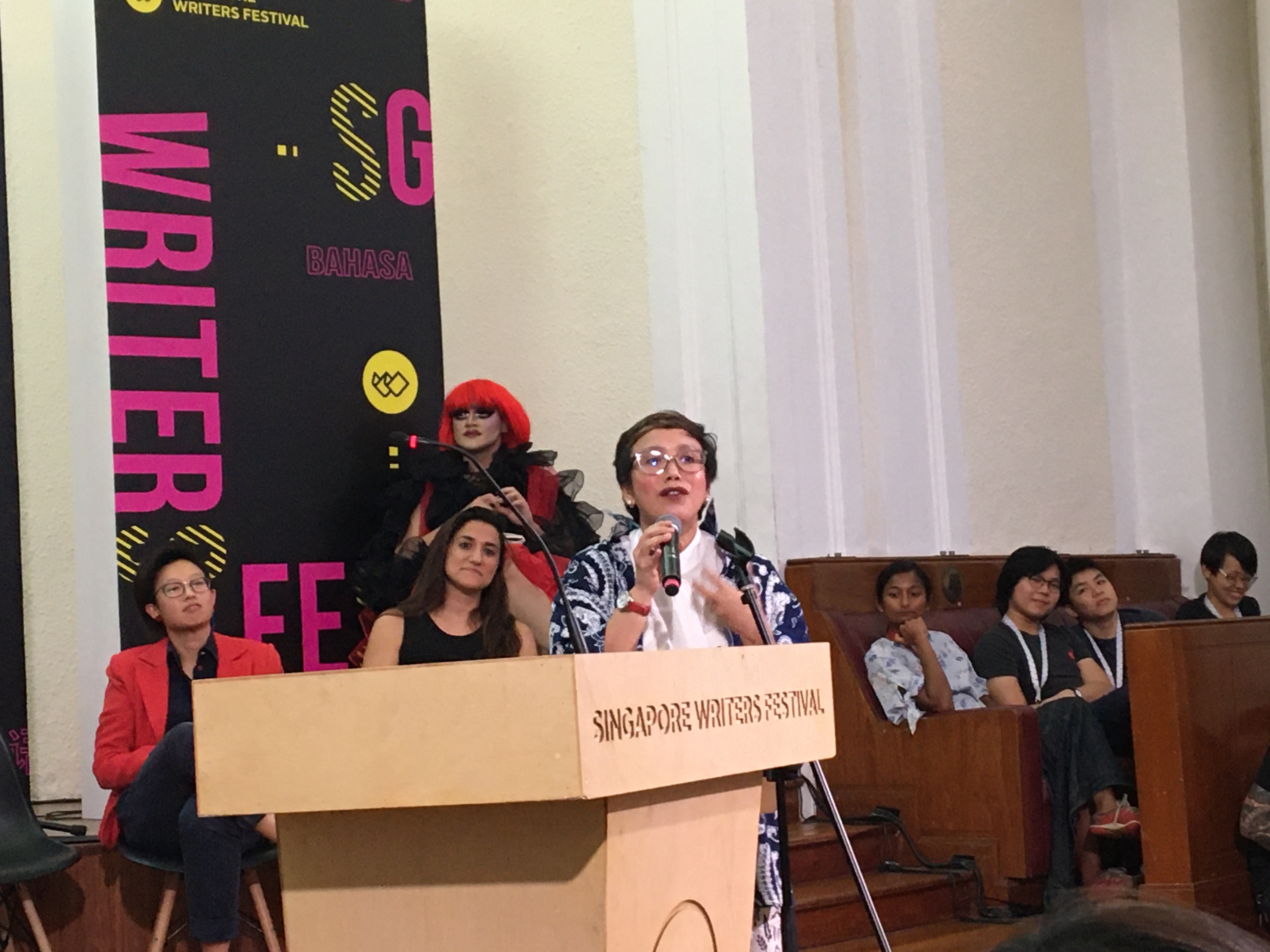 Theatremaker, drama educator and entrepreneur Oniatta Effendi follows this up on the opposition team with the role of men in feminism, such as songwriters for anthems from Gloria Gaynor’s ‘I Will Survive’ to Aretha Franklin’s ‘Respect’. Very much in line with the SWF, she argues on the basis of literary merit, bringing up Imran Hashim’s strong female protagonist in his Epigram Fiction Prize finalist novel Annabelle Thong, and even gets Arianna Pozzuoli to come up and enact a short excerpt from a Haresh Sharma play that argues against the unfair treatment and expectation of women in society. Despite running far overtime, Oniatta is a force of nature that never stops and delivered one of the most varied, multi-faceted arguments of the night. 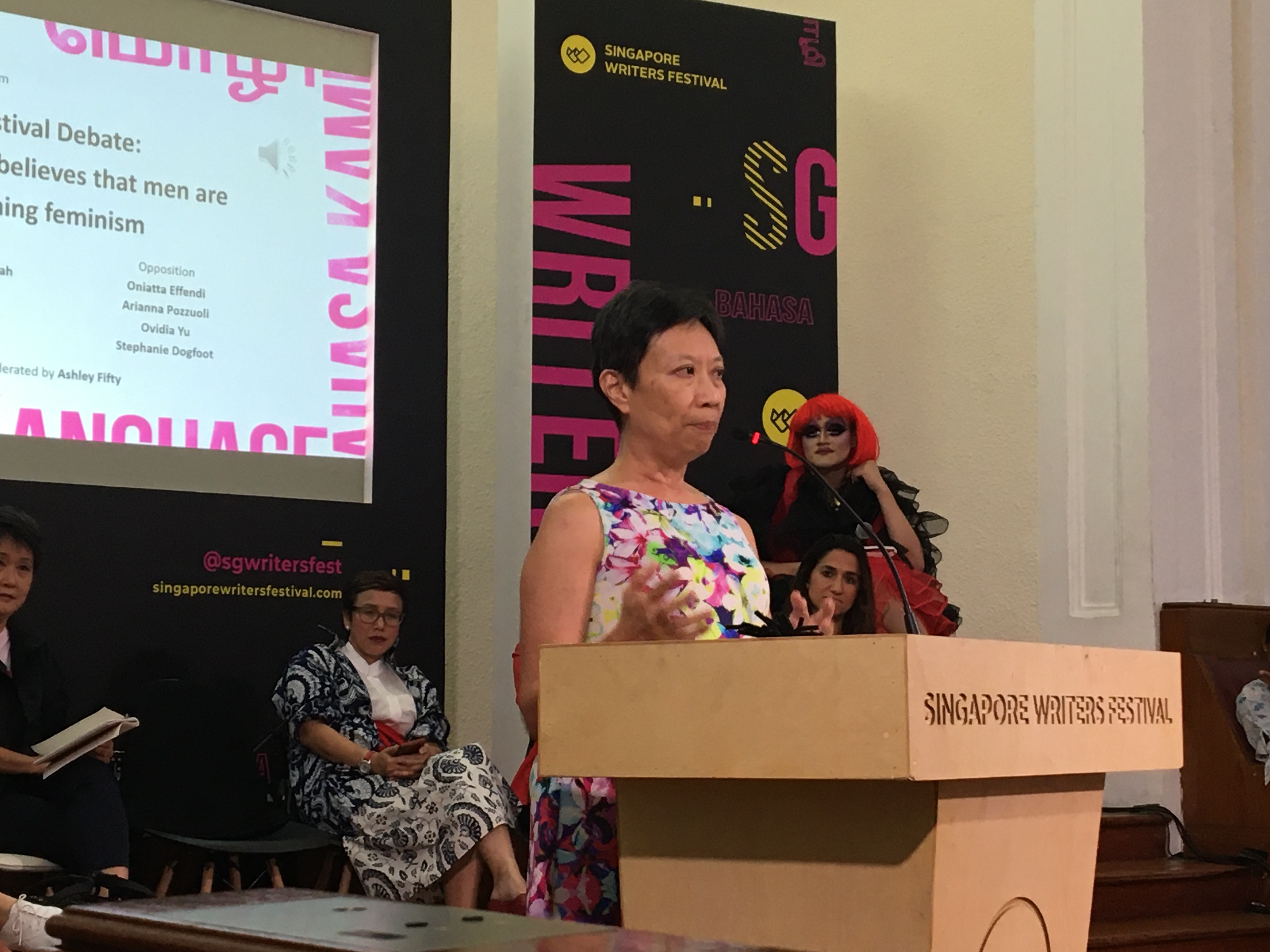 Segueing into the Q&A from the audience, it was fascinating how despite our relatively ‘woke’ culture, many of the questions that came out in fact wondered about issues that were either already covered by the debate, or showed a lack of awareness of the systemic oppression of woman (from a 14-year old). While feminism has certainly come a long way to ensure that is the case, there’s still a far longer way to go and much work to be done in the journey towards true equality.

Writer Ovidia Yu then took to the stand to deliver the opposition’s closing statement, putting on a ridiculous giant moustache as her ‘manface’ and imagining what it’s like for men as they’re left confused by how exactly they’re supposed to react to women telling them that holding open doors is an act of chauvinism rather than chivalry. Essentially, then, the opposition concludes that the real enemies are a lack of education and a need to not shut men out, to acknowledge responsibility on the part of women as well, and to move in the right direction together as one. 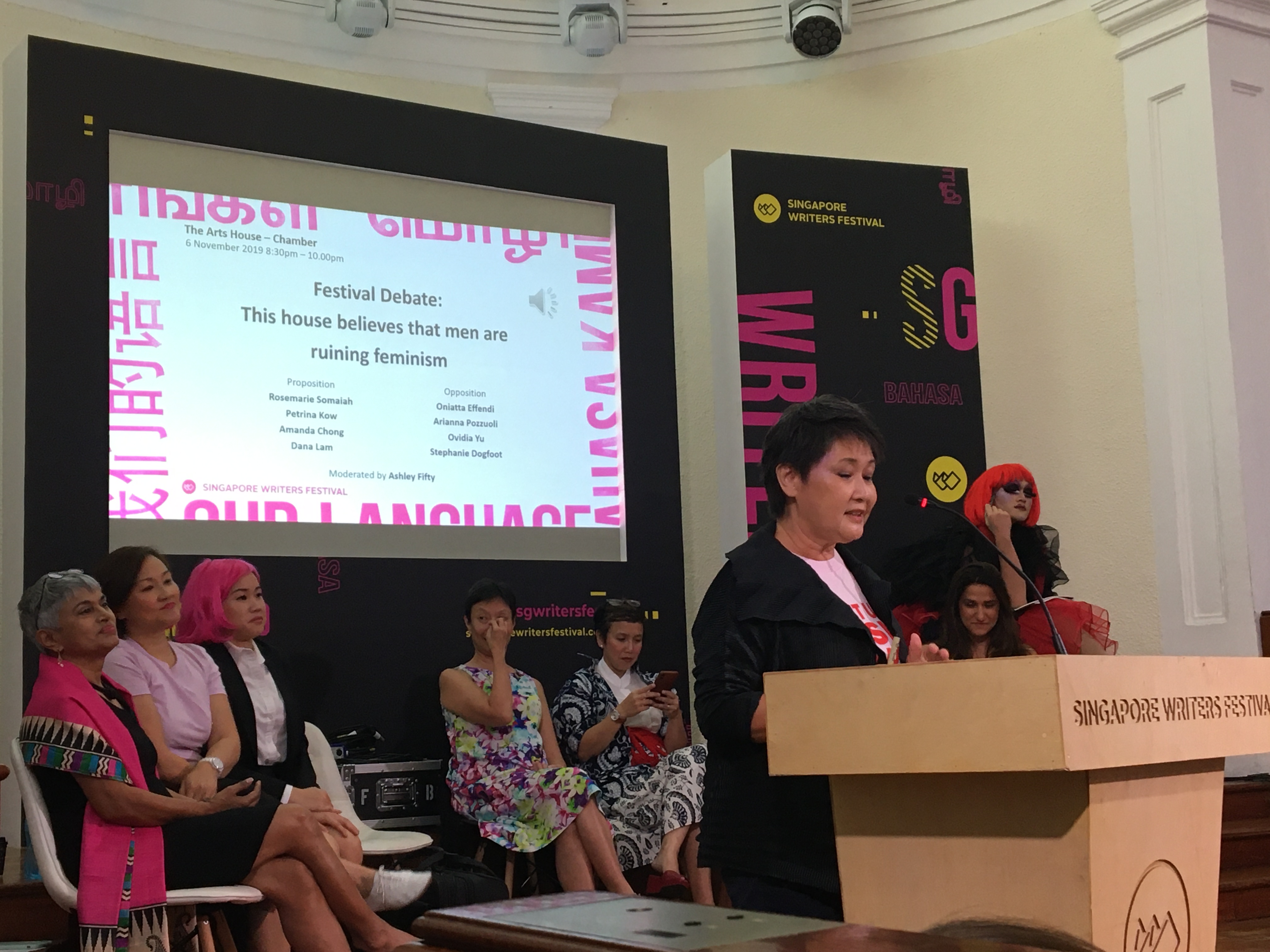 Equally formidable though is former AWARE President Dana Lam as she delivers the closing statement for the proposition, soft-spoken but speaking fiercely of how men have ruined feminism with ‘benevolent sexism and protection rackets’, essentially confining women within their own private space as a form of tokenism rather than enacting exact change. The problem again, is systemic and lies in the patriarchy, and women’s voices must then be heard and acted upon, raising actual parliamentary examples in the past of when women have been outrightly discriminated against for their gender and outdated stereotypes. 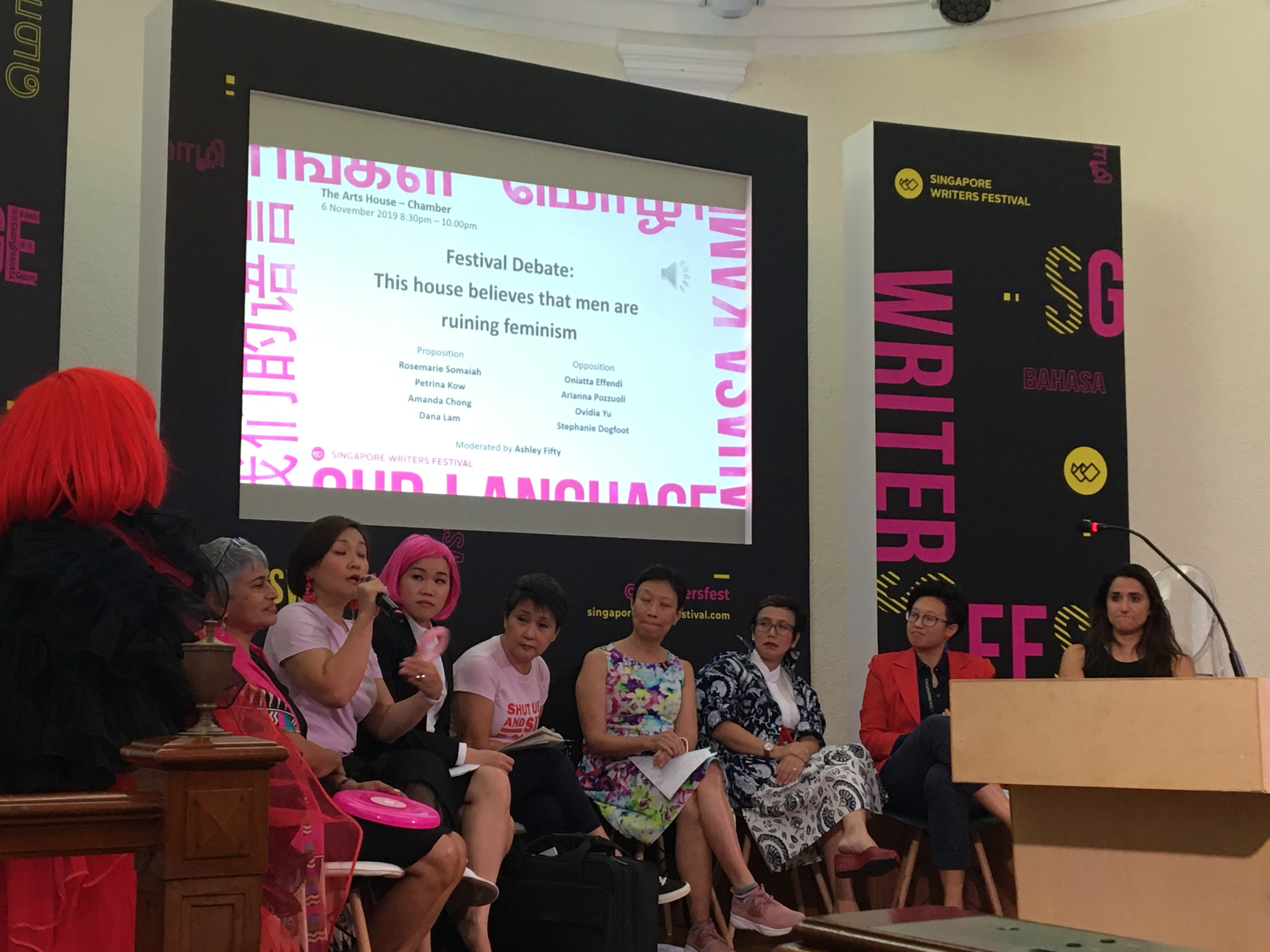 While the opposition eventually does win (by a show of applause), what eventually matters most isn’t so much who wins, but the fact that we’ve noticed how much overlap there is between both sides of the argument, a strong set of nuanced, balanced views that showcase the sheer variety of perspectives the many women in society can have towards this issue. Every member on the panel has proven themselves strong, feisty, intelligent orators, each of them having important, relevant points they’ve argued elegantly (and sometimes hilariously), thanks to the grains of truth so deeply embedded in each voice.

These are some of the most prominent female figures in the local literary scene, and have set a respectable precedent and united front as an example to the audience (including many youths and teens), emphasising that at the end of the day, feminism really is about coming together while respecting various views, making for a successful, well-organised and poignant Festival Debate for SWF 2019.

The Festival Debate took place on 7th November 2019 at the Arts House Chamber.