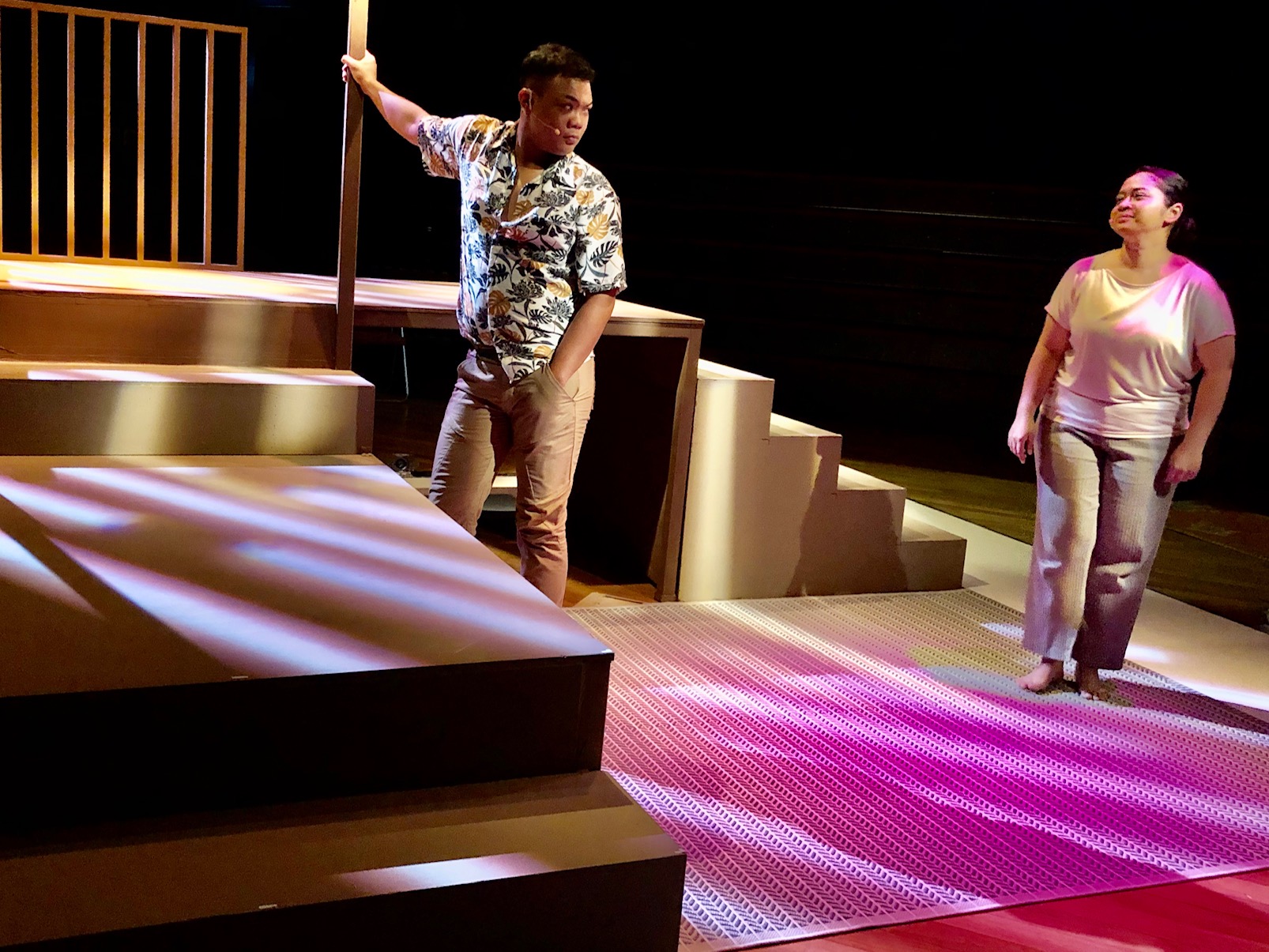 Trapped by the ghosts of their pasts.

Written in response to Noor Effendy Ibrahim’s first play Kerusi Buaian, Cermin, dan Jam (1991), Adib Kosnan’s Rumah Hantu is the result of a year of workshopping under he Malay Heritage Centre’s Projek Bahasa Pengarah (The Director’s Language Project), and sees the rather unusual subject of the haunted house take centrestage.

Directed by Noor Effendy Ibrahim, Rumah Hantu already creates an uneasy atmosphere the moment one enters the space with the eerie music playing and the ominous setting of a decrepit old house in a jungle, a familiar element in any Southeast Asian horror film. We are introduced to the house’s inhabitants: Boy (Farez Najid) and Aini (Suhaili Safari). It is never fully clear what their relationship is, or why they’re there. 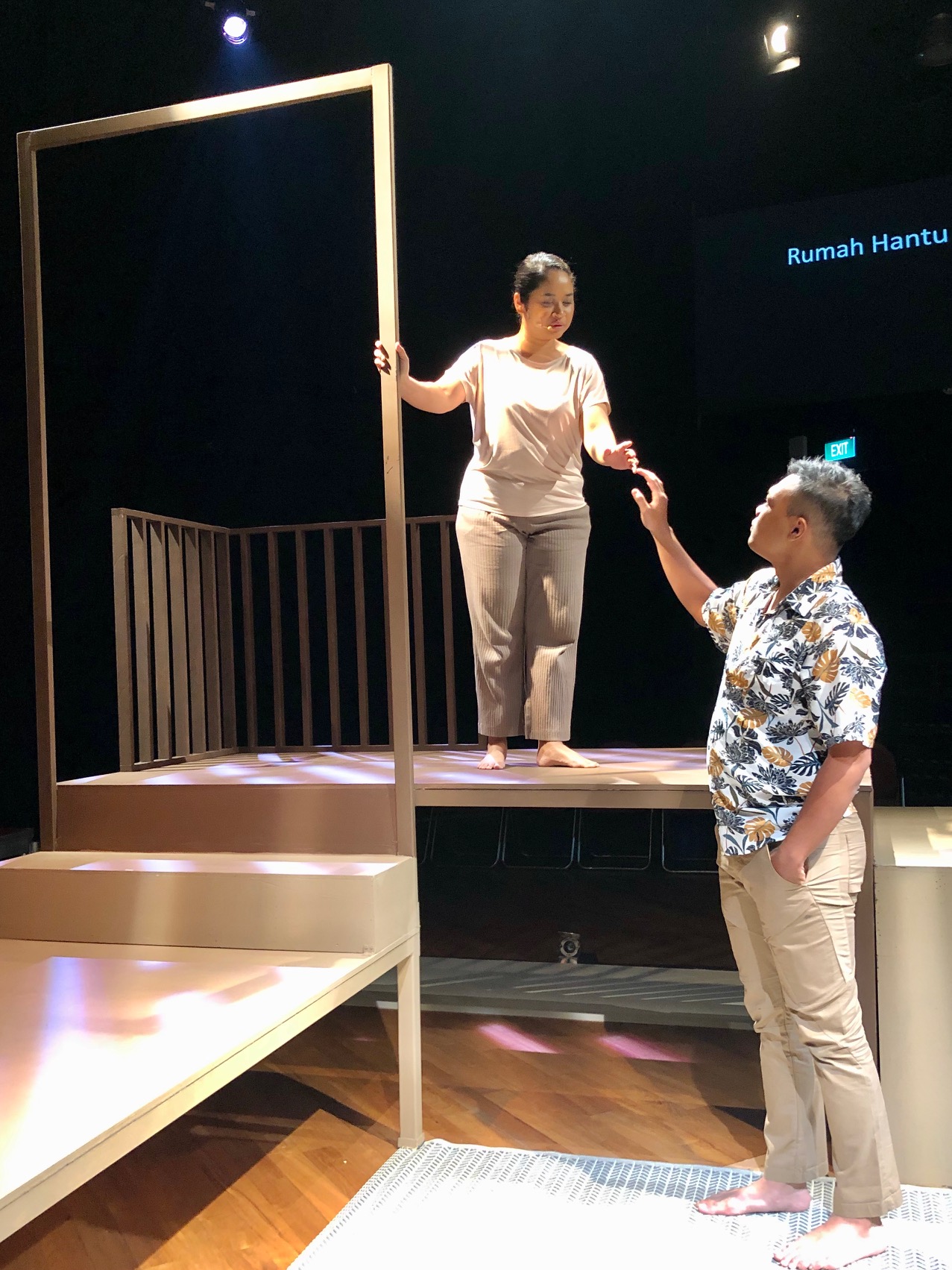 Boy walks into the house, hesitating as he notices something strange in the distance, looking back every once in a while, seeing nothing but still possessing the uneasy feeling of an invisible presence. ‘Where is he?’ Boy asks, before Aini answers that ‘he’ is around. We are still left in the dark – who is ‘he’? All we know is that Aini refuses to go upstairs, for fear of something terrifying that invokes fear in her.

As both of them are now having a drink in the living room, they hear a crash from somewhere in the house. They then go to find the source, with Aini curious but afraid of what may be lurking there. As they walk towards the source of the crash, they both stop. Aini doesn’t know what to do, but Boy, as if possessed, uses force and nearly strangles her, almost forcing her way up and through the door. 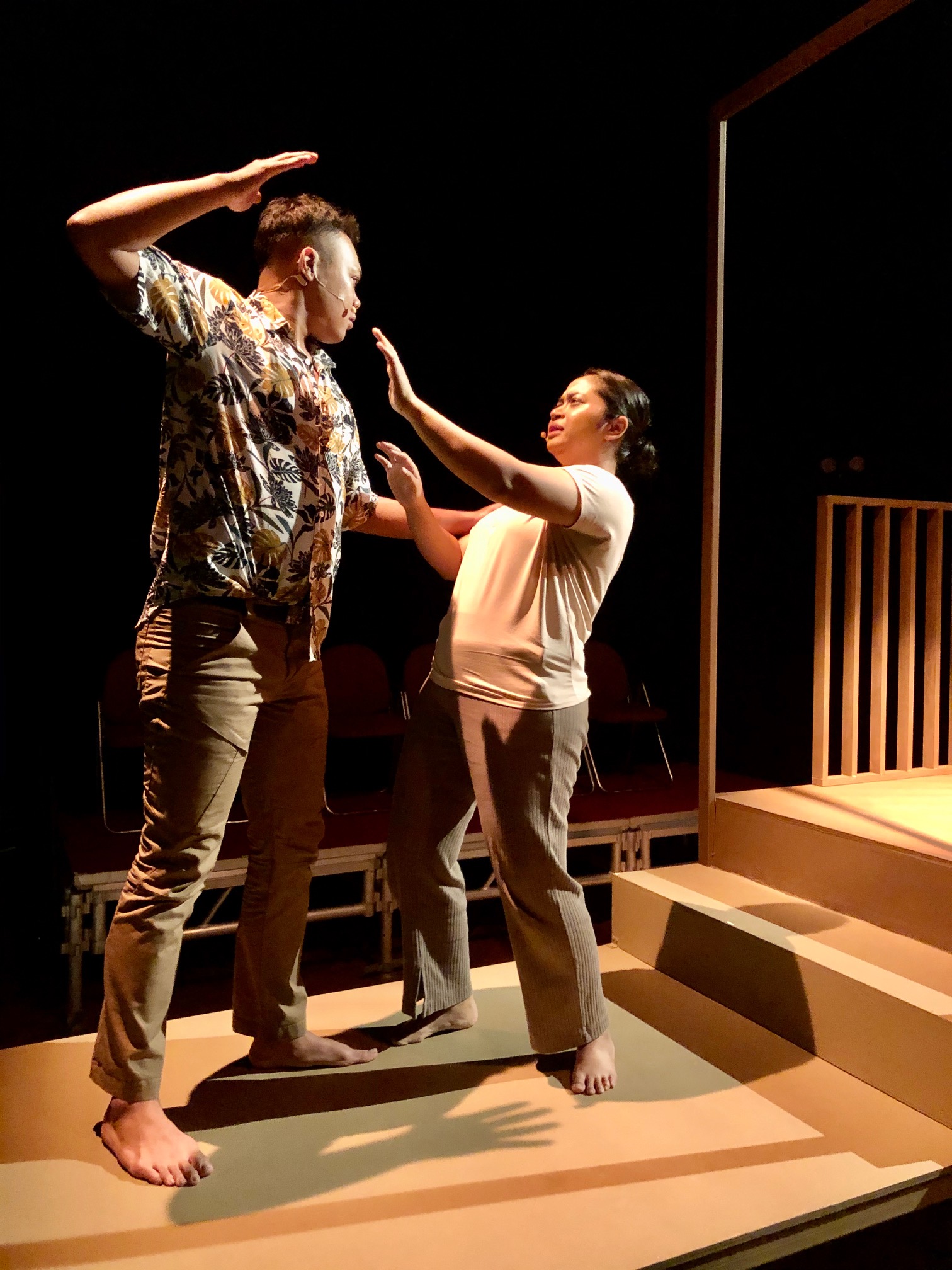 Almost as if they have entered a different realm, one feels that the place they’re in has changed. Aini now finds herself in the living room, where there are several boxes around. She begins swinging a box around, over her head, and red cups spill onto the floor, and she begins to recount her past, and one interprets the boxes and cups as vessels for her memories. She puts on a crimson red gown and collapses on the floor, her appearance reminiscent of a Pontianak. 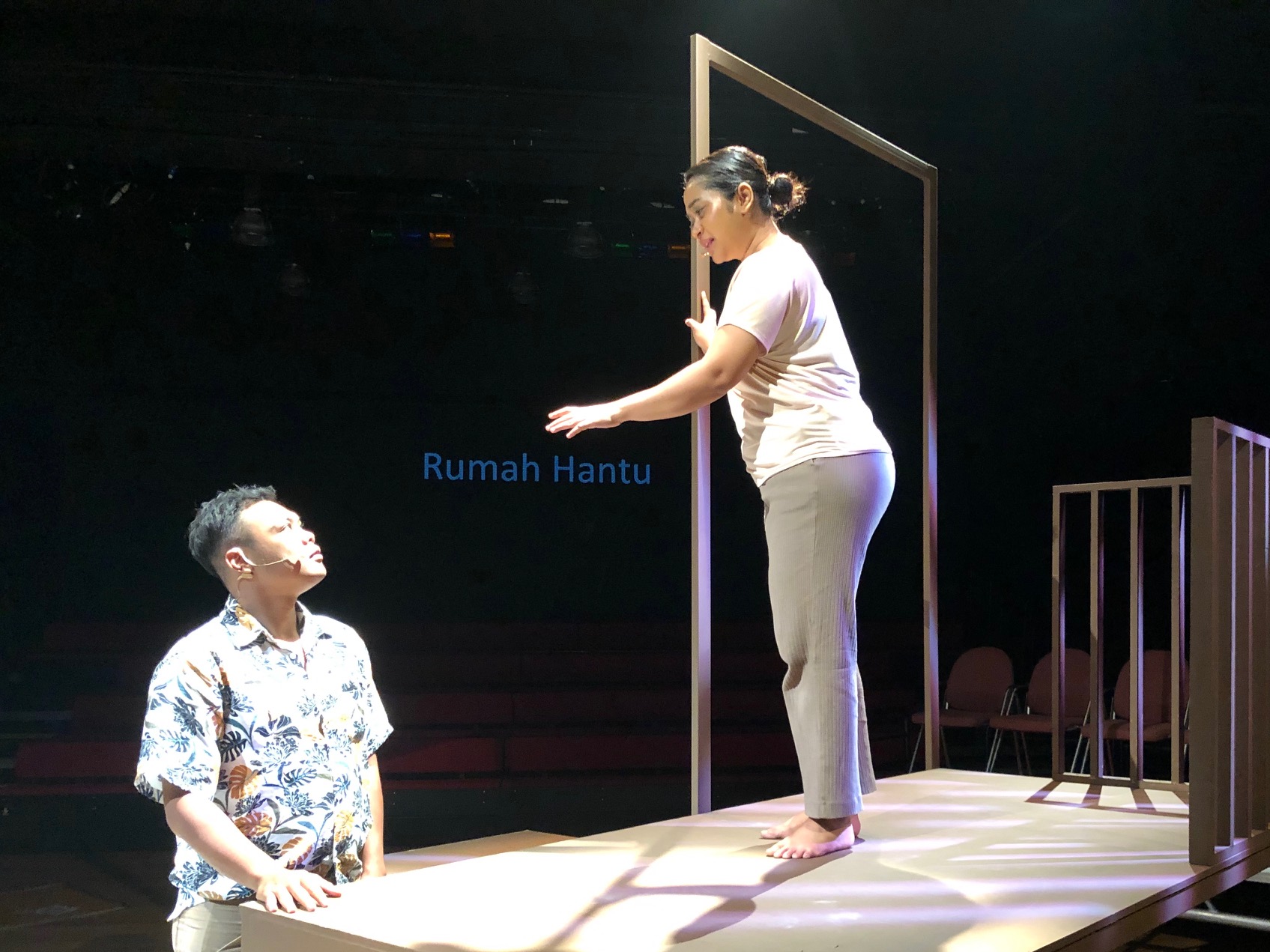 Boy is lost with nowhere to go, knocking on countless doors for help but refused each time. With the sound of rain in the background, Aini puts on her makeup and goes to answer Boy’s knocks and let him in, similar to how a Pontianak lures her ‘prey’ in. She lies down and dries her hair, and allows Boy to dry himself too, before they talk about the ‘wanderer’, saying he’s a good for nothing person. Boy and Aini then begin picking up the cups one by one, putting them back in the boxes, as if holding on to and hoarding these memories once more.

Now in the living room, Aini explains how she met ‘him’ – the person who returned a luggage to her, thanks to the address 19 Serenity Lane tagged on it. She recalls it as love at first sight, and suddenly wonders why are they not searching for ‘him’. Now, Both Boy and Aini then go out to look for ‘him’, holding each other’s hands and exiting the house hauntingly. 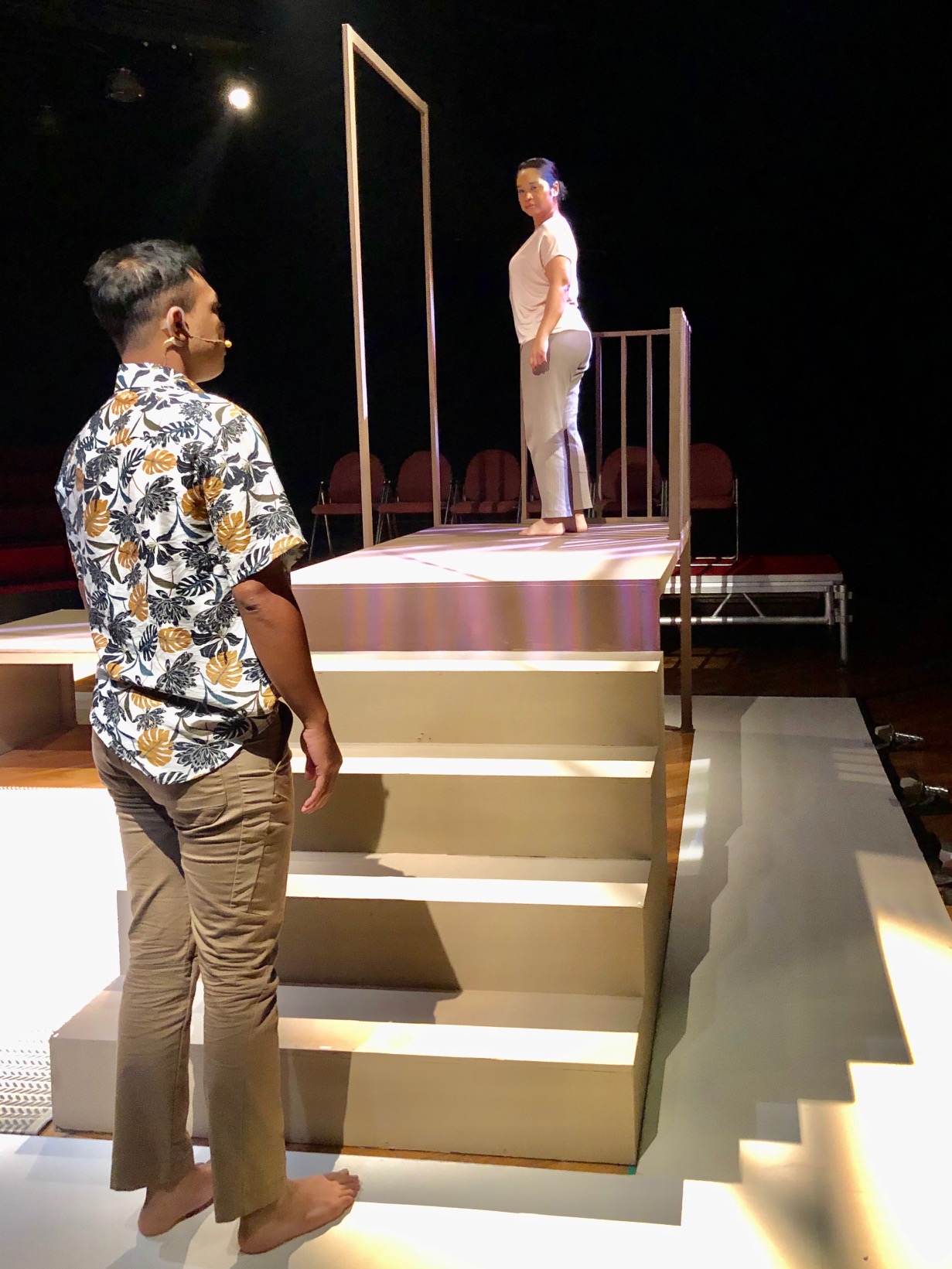 Even though this house has many ‘levels’, we see it as representative of the many layers in the story, where one can imagine it as following a different set of physical rules than our world. There is no real point of entry or set place to where they are, no real sense of ‘up’ or ‘down’, and so much of Rumah Hantu is about visualising and interpreting the events unfolding before us, a space and series of events that is up to us to decide what they are meant to be. 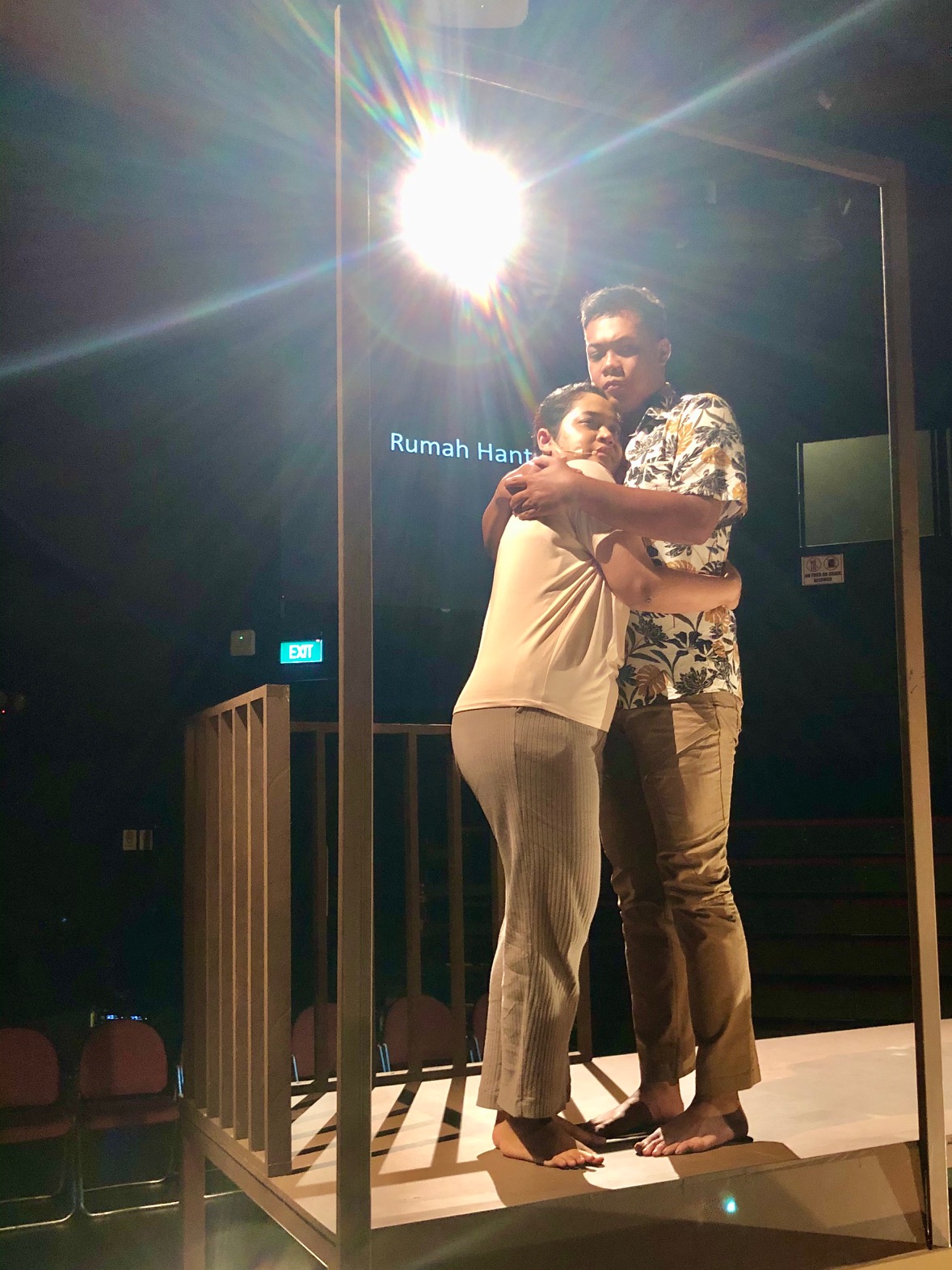 In addition, the surtitles at times do not match what the actors are saying, leaving out certain details. Yet one still understood what was being conveyed. There are certain things that don’t have to be said to be felt, and Rumah Hantu is a play that transcends language and left open to interpretation. While we all know what a ghost story is like, what we ultimately see in this play is wholly dependent on one’s own backgrounds, experiences and memories.

Rumah Hantu played on 1st and 2nd November 2019 at the Malay Heritage Centre. Auditorium as part of Malay CultureFest 2019.