LONDON –  VAULT Festival, one of the largest curated arts festivals in the world, is back for its eighth edition next January! From new theatre and comedy, immersive experiences, cabaret, live performance and late-night parties, this is practically London’s biggest, boldest and wildest arts festival not to be missed.

Come 2020, performances will take place across a whopping 18 spaces around Waterloo and the South Bank with the, with The Vaults on Leake Street itself acting as a central hub for the festival. The Cockatiel at Hello Darling will be a brand new intimate comedy venue, while The Festival will also return to The Network Theatre and Vaulty Towers, alongside pop-ups in the local area. The Gift Horse Stage at The Horse & Stables pub will see half its profits support Child.org’s Team Mum Campaign, helping to fund pregnancy services in rural Kenya that offer health information and medical support for new mothers.

The VAULT Festival Directors and Producers Mat Burt and Andy George comment: “This year’s festival is bigger and bolder than ever before. There is a real sense of crisis and hunger for change from the artists we’re working with. We still believe in the collective impact this festival can have on the industry, our artists, and our audiences.”

“Over the years VAULT Festival has showcased some of the very best shows from both established and emerging artists, and at the same time has become a hotbed for brand new audience experiences that shatter the status-quo. It’s vitally important to us that VAULT Festival is providing a platform for underrepresented voices and stories to be heard.”

The diversity of the Festival goes beyond the demographics of those making the works, but also looks to the style, content and formats of every piece. A welcoming, vibrant, and inviting place for people from all backgrounds, the VAULT Festival 2020 programme expands what live performance can be and who it belongs to – everyone is welcome. The Festival intends to take the temperature of what the best artists in the UK believe work should be discussing and reflect the most urgent conversations happening. This year is no different, and features some of the most radical and exciting new work from the most promising new and experienced artists and companies.

At the forefront is the climate crisis and VAULT Festival are continuing their commitment to becoming more sustainable, this year partnering with Staging Change, an organisation committed to promoting environmentally sustainable practices in the theatre industry. Bringing together paperless tickets, compostable food packaging, and removal of single-use plastics, VAULT Festival will also participate in the Green Earth Appeal’s Carbon-Free Dining campaign, which gives diners the option to donate to offset the carbon footprint of their meal by planting trees in developing countries. All Festival posters and flyers will be printed in an environmentally sustainable way. This sustainability focus is reflected in Eco-Week in Week 4 with shows such as Matt Winning’s It’s the End of the World as We Know It and the Staging Change Award winner, the carbon-neutral musical adventure How To Save A Rock.

In 2020, VAULT will look outward to bring global stories to the heart of London. A devised piece exploring the ongoing Hong Kong protests against China’s Extradition Bill, with Freedom Hi 閪 an urgent reflection on the right to protest and the gendered experience of political resistance. Far Gone is inspired by writer John Rwothomach’s own experiences of nearly being kidnapped by Joseph Kony’s guerrilla rebel group to become a child soldier in Uganda. It explores the complexity of war and the relationship between the West and narratives of ‘Africa’.

Inspired by India’s legalisation of homosexuality in 2018, Santi & Naz is a queer love story set against the backdrop of the partition of India, arguably the greatest humanitarian crisis of modern times. From across the Atlantic, Alex Edelman brings the award-winning Just For Us to London which details his astonishing encounter when, following anti-Semitic online abuse, Edelman decided to covertly attend a meeting
of those same anti-Semites.

The 2020 Festival also provides a platform for championing queer identity and LGBTQIA+ communities. Lesbian student Regi and gay journalist Babs put their friendship to the test when they plan to marry to fool the authorities back home in Nigeria about who they truly love in How We Love. A comedy spoken word show about gender, the media and not fitting any of the boxes, Too Pretty To Punch is full of explosive original songs and kickass video projection.

Wigs Snatched, Perceptions Destroyed is the fake TED talk that needs to go viral as Erinn Dhesi teaches how to monetise and curate your online presence while maintaining just enough of your dignity and identity.  And following their sell-out run at VAULT Festival 2019, The LOL Word are back with their Coming Out Special with brand new stand-up about all things queer. 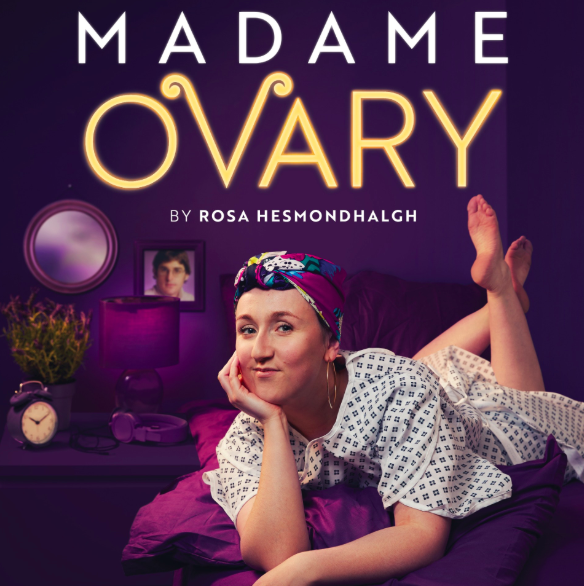 Entertaining and educating audiences on the impact of illness was at the heart of both the Pleasance and the Summerhall Award winners at the Fringe this year with shows based on personal experience. VAULT Festival’s Pick of Pleasance Award winner, Madame Ovary is about the usual struggle a 20-something has with trying to stay relevant alongside the less typical struggle of trying to stay alive following Rosa Hesmondhalgh’s ovarian cancer diagnosis.

Summerhall Award Winner, First Time is a funny and heartfelt solo-performance about HIV+ theatremaker Nathaniel Hall’s experience growing up positive in a negative world. Also coming to the Festival, Supernova is the candid and hilarious pop-culture romp which explores what it’s like to date when dealing with depression. LOVE (Watching Madness) is the searingly honest show about the complexities of loving someone with mental illness and how it feels to care for someone with bipolar disorder who can’t always show that they care for you.

A story about disability and the Me Too movement, Tinted tells audiences to forget the Undatables, because disabled people are cool, funny and sexy, and their bodily autonomy deserves real respect. STAGES is the interactive video game musical with an electronic soundtrack about a teenage boy with autism and what happens when the code of our lives gets rewritten. Blow: A Deaf Girl’s Fight follows Hannah: young, female and deaf, she’s used to fighting, but things get a whole lot harder when she steps into a tough 80s boxing ring.

VAULT Festival continues to stage the most innovative, off-the-wall and creative shows out there; Coming Out of my Cage (And I’ve been doing just fine) is an interactive investigation, through the medium of Karaoke, of how The Killers’ song became a cultural touchstone. The Sex Ed Show from the House of Burlesque will tickle your funnybone, challenge your mind and broaden your horizons: in safe, supportive, rhinestone-gloved hands. Dance with deities, chat with cherubim and grind heavenly bodies with Xnthony and his apostles who are ready to offer Deluxe Access into Paradise.

Soho Drag Lab will showcase the best of the best in the new wave of cabaret and drag, expect avant-garde, glitzy, powerful, political and outrageous work. Beach Body Ready is a defiantly feel-good show which sticks two fingers up at the media’s beauty standards, while Fanboy is a love letter to the things we adore absolutely, unconditionally and obsessively. With pirate queens and space revolutionaries, Asian Pirate Musical explores freedom, found families, and finding fun in the face of our future.

Bin Juice has got mobsters, wipe-down aprons and a gruelling interview process for a
toxic waste removal company, while nobody is quite sure what it is that Tony Law has but a Dadaist, surreal and absurd hour about how he Identifies. The Free Association will bring some their acclaimed improvisation underground, with LGBTQFA starring some of their best queer performers while the Minority Report will be presented by exclusively BAME players. With crime, justice and utter nonsense, The Badge is the riotously funny all-star cop show while The Nearly News Show offers comprehensive in-depth analysis of the audience’s biggest headlines.

I’m Not Here to Make Friends is a juicy and scandalous new reality TV show; Important Art seeks to unearth lost cultural treasures to the audience, lovingly restored and entirely improvised; Starry Starry Eyes is the totally improvised singing talent show you never knew you needed. Super group sensation Sorry are back with a special guest who will prompt the show every night, while the special guest in Jacuzii will take a one-word suggestion from the audience to inspire a monologue and RAD party is the raucously irresponsible show based on the audience’s wildest and weirdest party stories.

With a massive eight-week line-up of shows set to be presented, each Tuesday, more productions will be revealed until the full programme is released on Tuesday 3rd December.

0 comments on “In London’s (Off) West End 2020: VAULT Festival 2020 Reveals First Round of Shows; Committed To Going Green With 8th Edition (Preview)”