The annual Neon Lights Festival returned to Fort Canning last weekend, bringing with them a host of art and music acts both international and regional for one heck of a good time, regardless of age. With the gates opening from 1pm, Fort Canning saw a flurry of activity happening all the way till the end of the day, as families, friends and music lovers of all backgrounds gathered to enjoy the festivities. 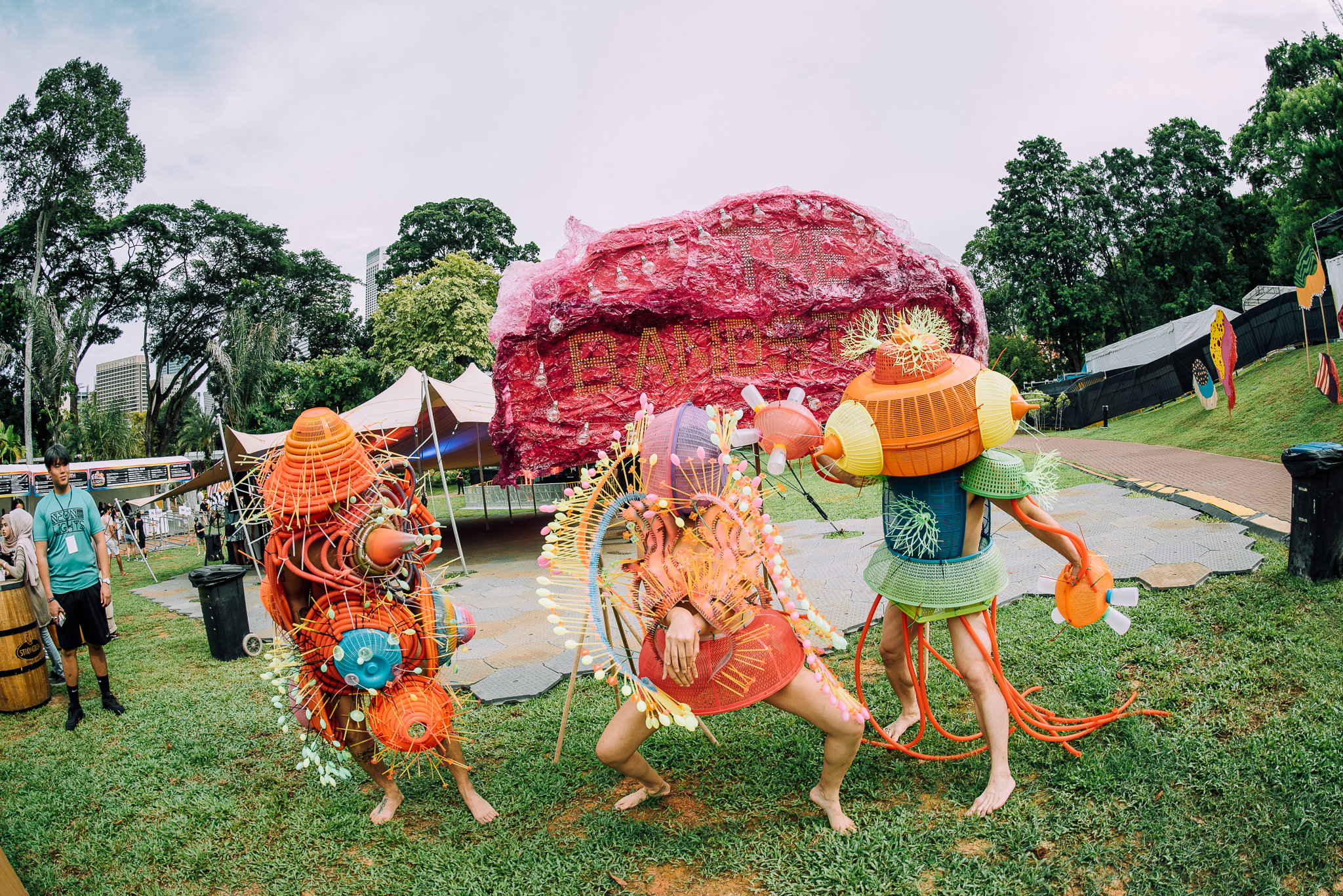 From otherworldly dances by Aliens of Manila X Singapore to a Silent Disco for kids, Sideshow Garden Games and plenty of all-ages acts playing while the sun was out, the faces present were all smiles as attendees immersed themselves in the almost foreign environment created beyond the gates. Colourful, crafty signages adorned the festival grounds, giving Neon Lights a more celebratory feel, and there was more than enough space for all to find a seat or standing area to relax. 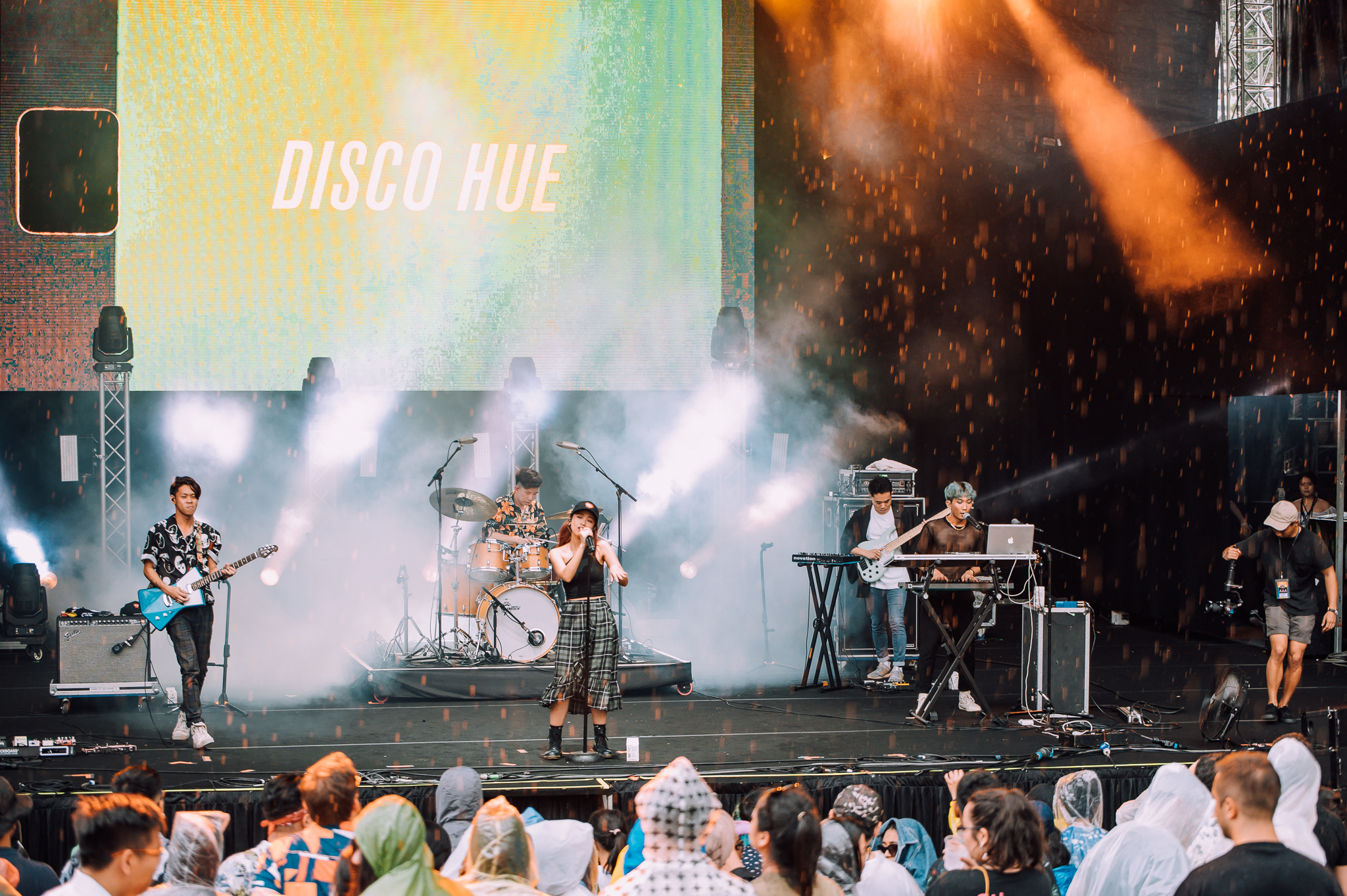 Despite a heavy rain beginning to fall towards 5pm on Day 1, local indie darling Disco Hue took to the stage and sang their hearts out with hits like “Ultra Venus” and the single that shot them to stardom “I’ll Be Waiting”. Clad in ponchos, the crowd went wild for them, and as if chased away by sheer enthusiasm alone, it wasn’t long before the sky cleared and the atmosphere was left cool for the evening’s acts. 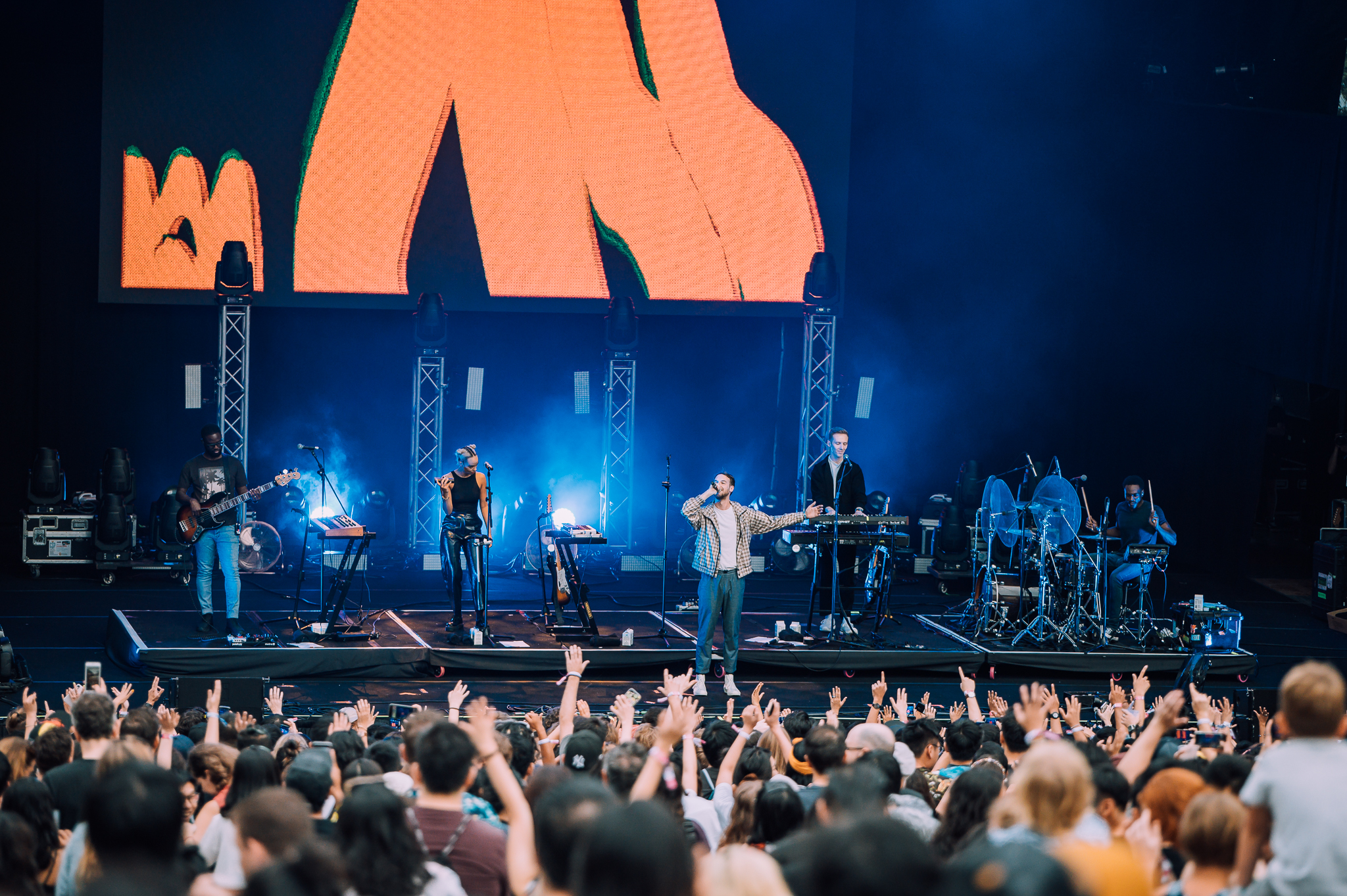 As the sky darkened, English electronic duo HONNE came onstage to perform their chilled out set, complete with guest act BEKA to perform their hit song “Location Unknown”, welcoming the night as they closed their set with “Day One” and leaving the audience transfixed and in the right mood for the rest of the night to come. 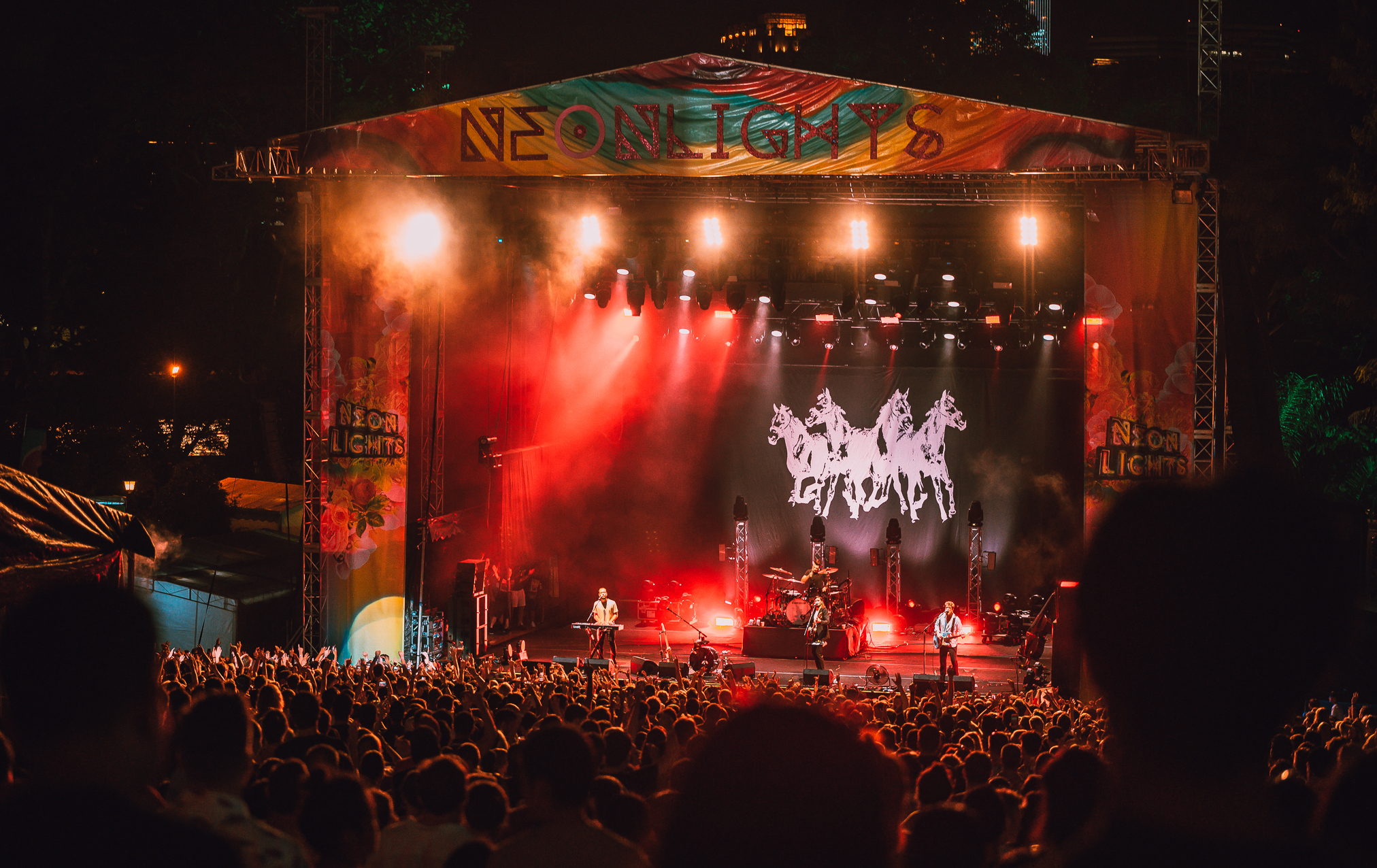 British folk rock band Mumford & Sons took to the stage at half past 7, making their long-awaited Singaporean debut since they first came onto the scene 12 years ago, to a completely full Fort Canning Green as festivalgoers jostled for space and crammed themselves on the hill. Banjos and cellos were featured in full, as were singles from their latest album Delta, including “Guiding Light” and “Beloved”. But longtime fans were also blessed with early hits such as “The Cave” and “Little Lion Man” way back from their “Sigh No More” era in the early 2010s. Knowing exactly how to work a crowd, frontman Marcus Mumford worked in friendly banter in-between numbers, and kept the energy going all the way with their high-octane set. 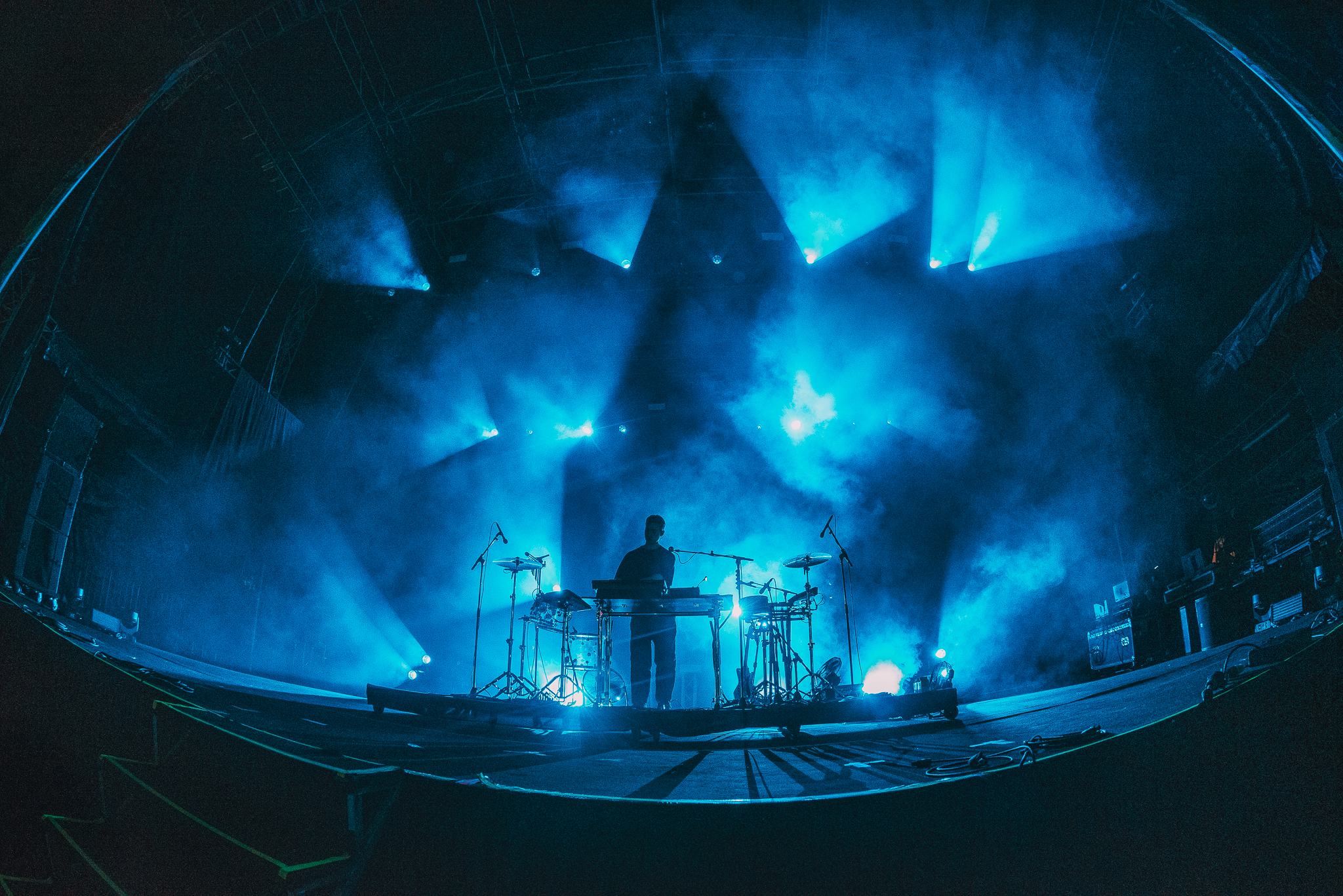 Day 1 ended off with British electronic artist Mura Masa, with a meteoric rise to fame in just a couple of years, with his self-titled debut garnering multiple Grammy Award nominations, amidst other singles that’ve charted. Despite not having his collaborators present (from the likes of Charli XCX, A$AP Rocky and Bonzai), a feisty guest performer provided the female vocals to most of his songs, full of madcap energy even at the end of the night as she danced across the stage and rev up the mood. It worked – the hill was alive with festival goers dancing along to “1 Night” and “Firefly”. 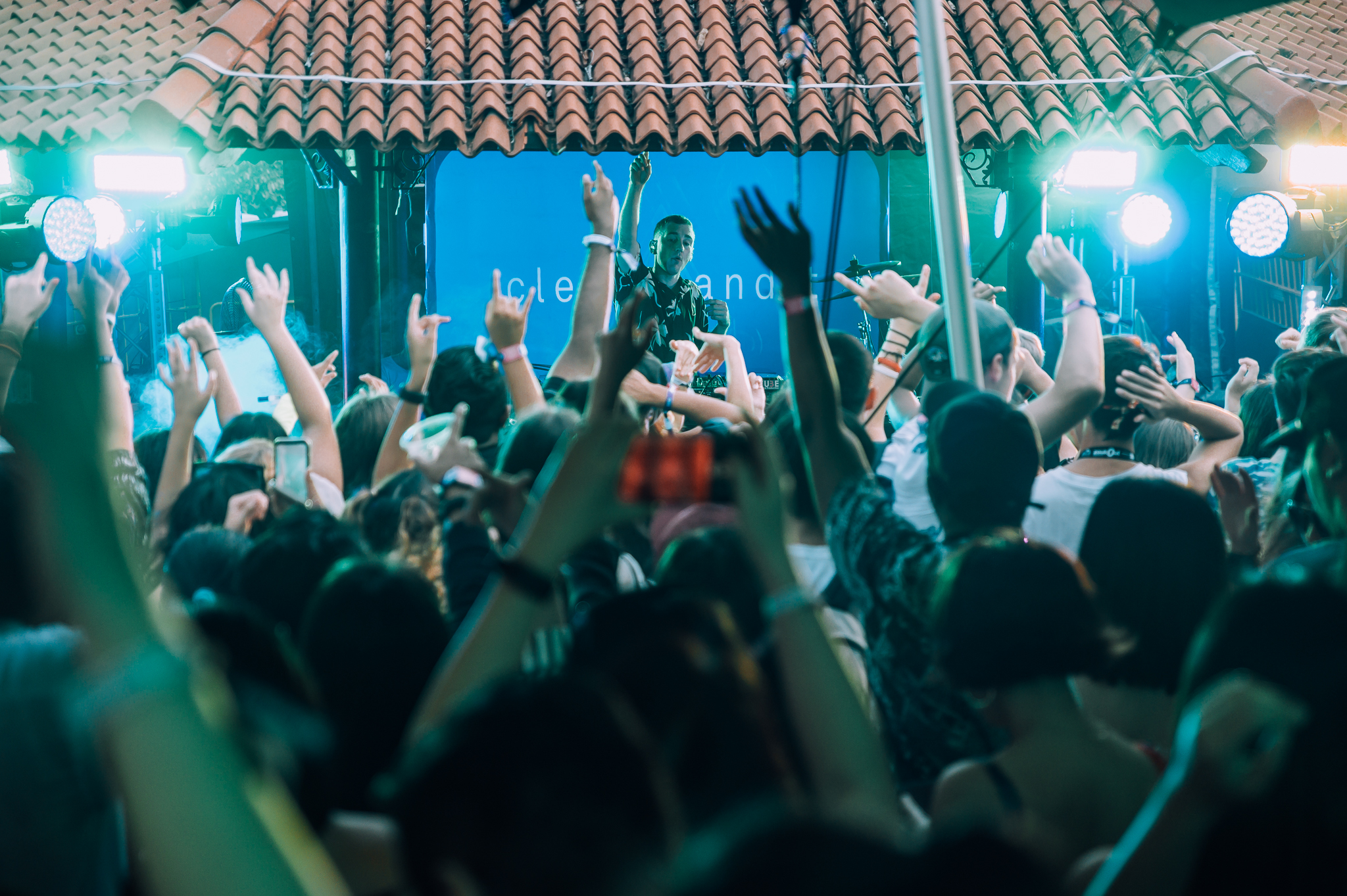 Day 2 met with similar rainstorms as Day 1, but these passing showers quickly gave way to calm skies and more acts to follow up Day 1’s strong start. We began the day with a DJ set by the UK’s Clean Bandit, bringing their hits from ‘Solo’ to ‘Symphony’ to ‘Rockabye’ and ‘Rather Be’ to the stage to get Day 2’s festival goers dancing along, warming us up as we got into the music. 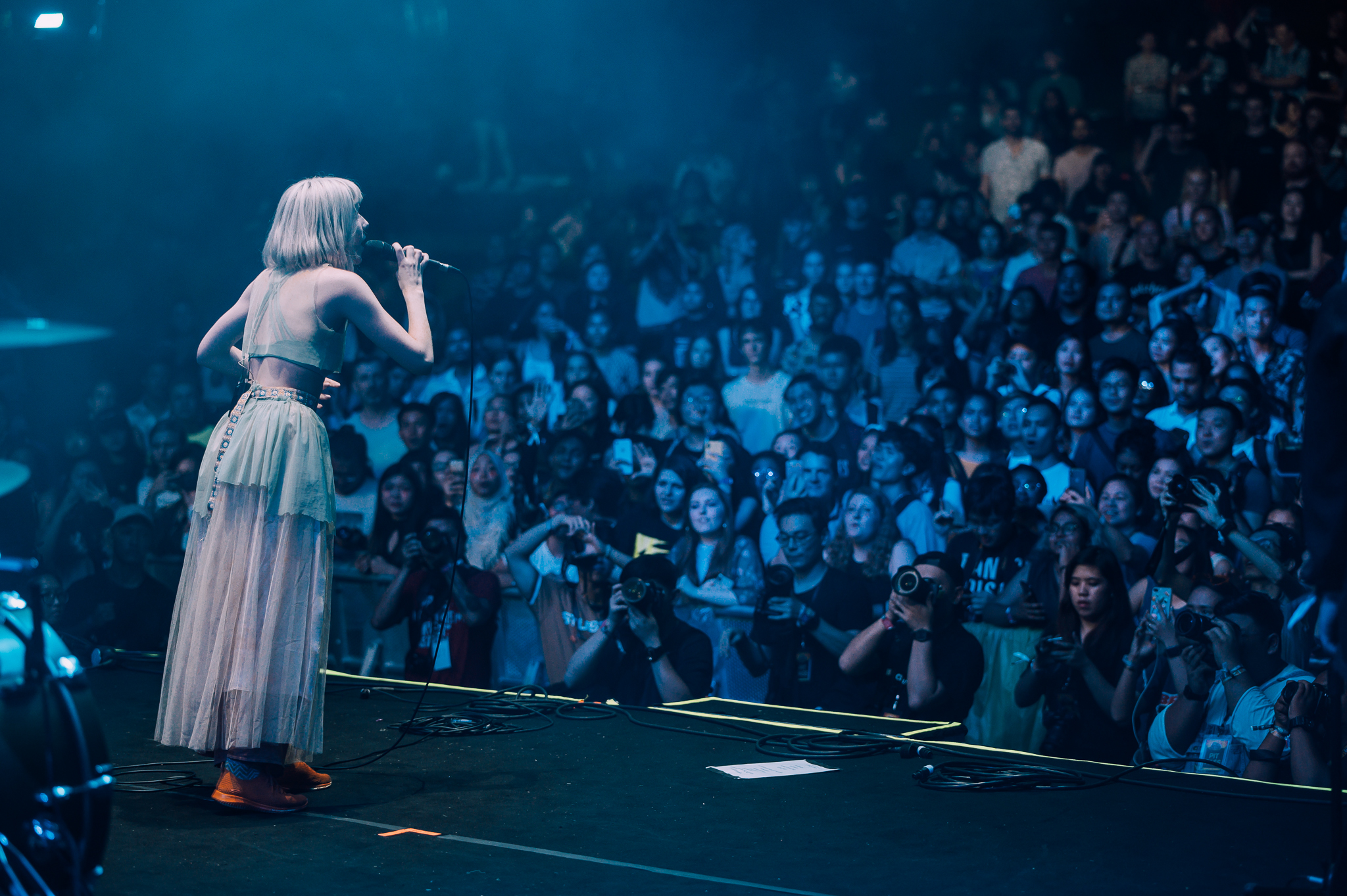 Kicking off the headliner acts was Nordic synth-pop artist AURORA, arriving onstage in a gossamer dress and orange sports shoes, encapsulating her youth and Scandinavian ethereal aesthetic in a single outfit. Utterly charming, prior to beginning each song, AURORA would give a little introduction as to what the song was about, empowering in her messages of self-love, of freedom, of environmentalism, soothing in her assurance and otherworldly voice as she bounces about the stage energetically, full of vigour. Shuttling between the calmer tracks such as “Home” to the more rhythmic dance numbers such as “Queendom”, the high point of the concert was her rendition of “Running with the Wolves”. Encountering a technical hiccup due to a moment of overenthusiastic dancing, AURORA doesn’t miss a beat, getting the audience to sing along while the issue is resolved, and returning to a resounding chorus that places the 23-year old firmly in our hearts as one to keep watching out for. 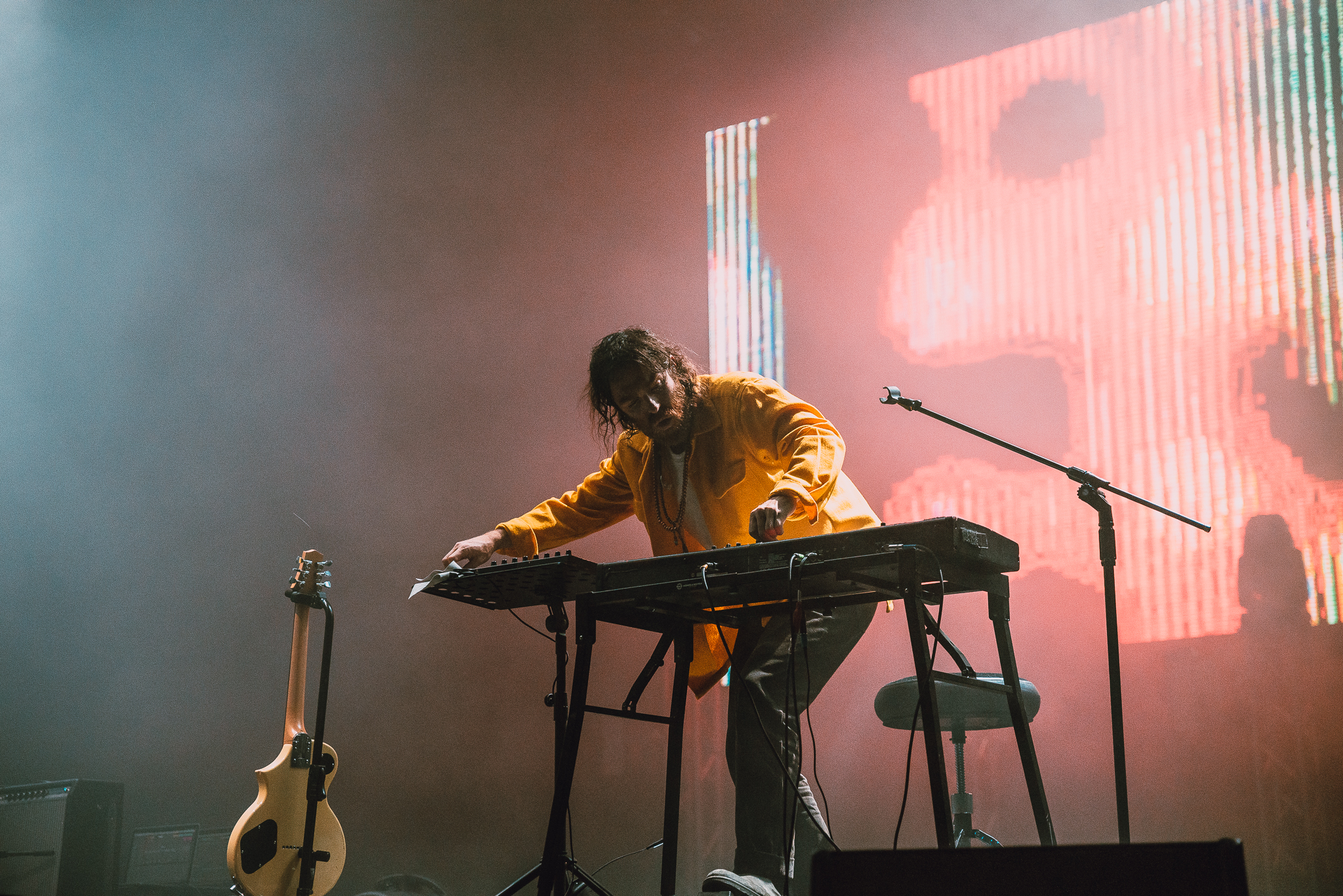 Amidst the lineup for Day 2, Nick Murphy (formerly known as Chet Faker) was undoubtedly one of the acts festival goers looked forward to most, and the crowd swarmed as they mentally prepared for his set. Encountering a number of technical difficulties and soundsystem issues, Nick Murphy left the stage twice before returning to finally begin his set, with a trippy, abstract video playing behind him. The stage was set and the audience was ready, and the feelings ran high as he opened with a rendition of his hit single “Gold”. Noticeably off his game however, the energy felt off as the set continued, with Murphy ending a song seemingly midway through before closing with a final, moody, piano-driven number. Leaving the stage approximately 15 minutes into his set, audiences were left shocked that this marked the end, shouting for him even after the crew set-up the stage for the final act of the night, leaving a damp, disappointed and disgruntled mood all around. 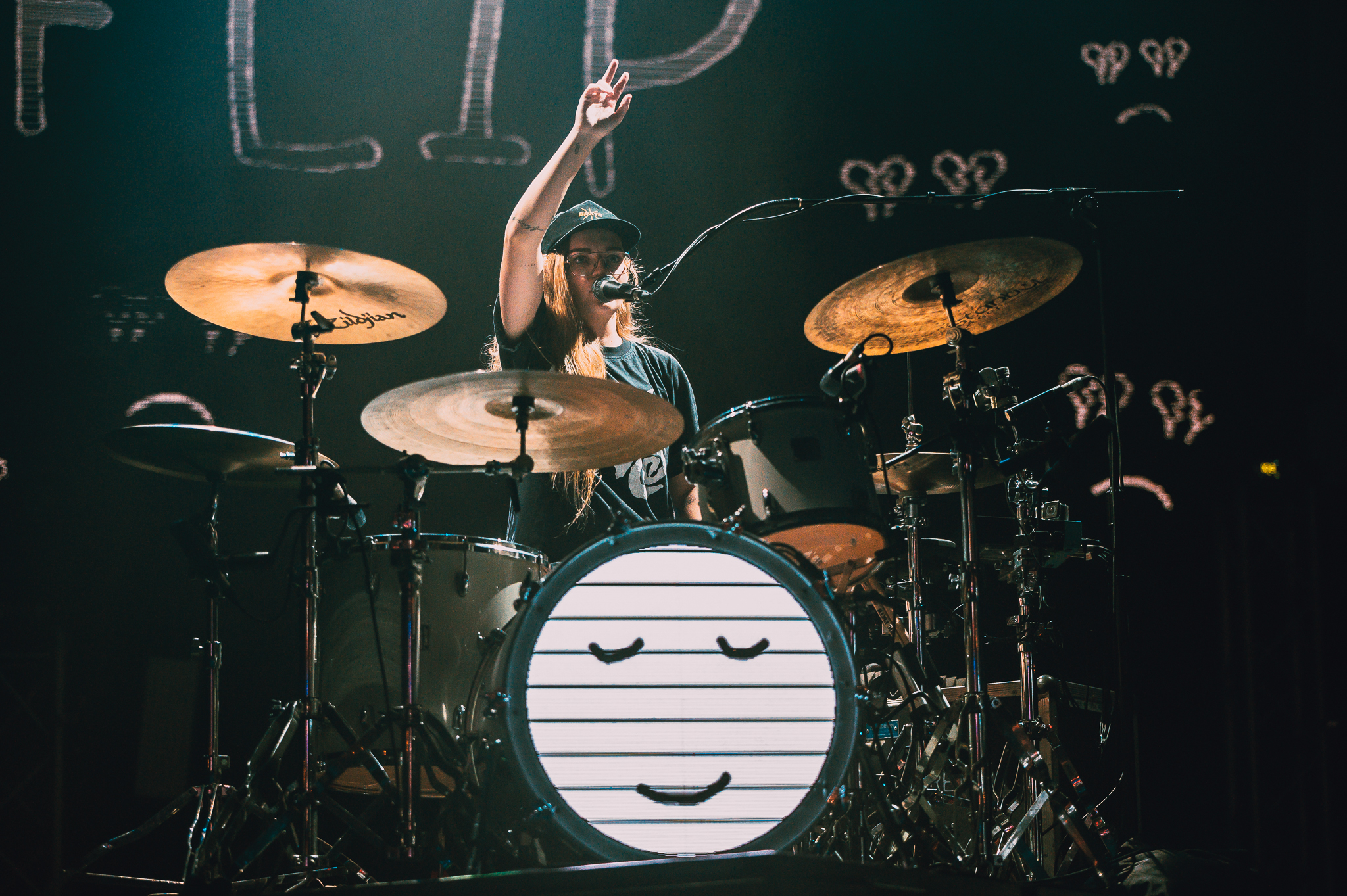 With top billed performer and headliner Halsey cancelling her appearance just three days prior to the festival, it’s no surprise that plenty of audience members called for a refund for their Sunday entry tickets, and following the Nick Murphy debacle, Fort Canning Green was left nearly empty, with the various food and beverage stalls beginning to shut down. Replacing Halsey was rising Australian artist G Flip, a virtual unknown outside of her home country, and the grounds were quiet as crew members set up for her.

But those that stayed on were rewarded by the most uplifting performance of the night, and a triumph of new music as the young but talented G Flip brought the energy way up again. A drummer by nature, the 25-year old expressed love and appreciation for the opportuntiy to perform in Asia for the first time ever, telling her personal story of going from instrumentalist to becoming an artist in her own right before segueing into numbers like “Stupid” and “Lover” – pop through and through, yet emotionally resonant with catchy hooks. Performing a medley of drum solos from popular songs, the crowd on Fort Canning Green only grew as she went faster and faster, playing on her kit (with her bass drum even featuring an animated face that changed as her set progressed). With a strobe light-fuelled, hard rock cover of Jet’s “Are You Gonna Be My Girl”, the now-sizeable audience were fired up, before G Flip ended her set with her song “Drink Too Much”, and garnering thunderous applause from those who remained and saw her through. 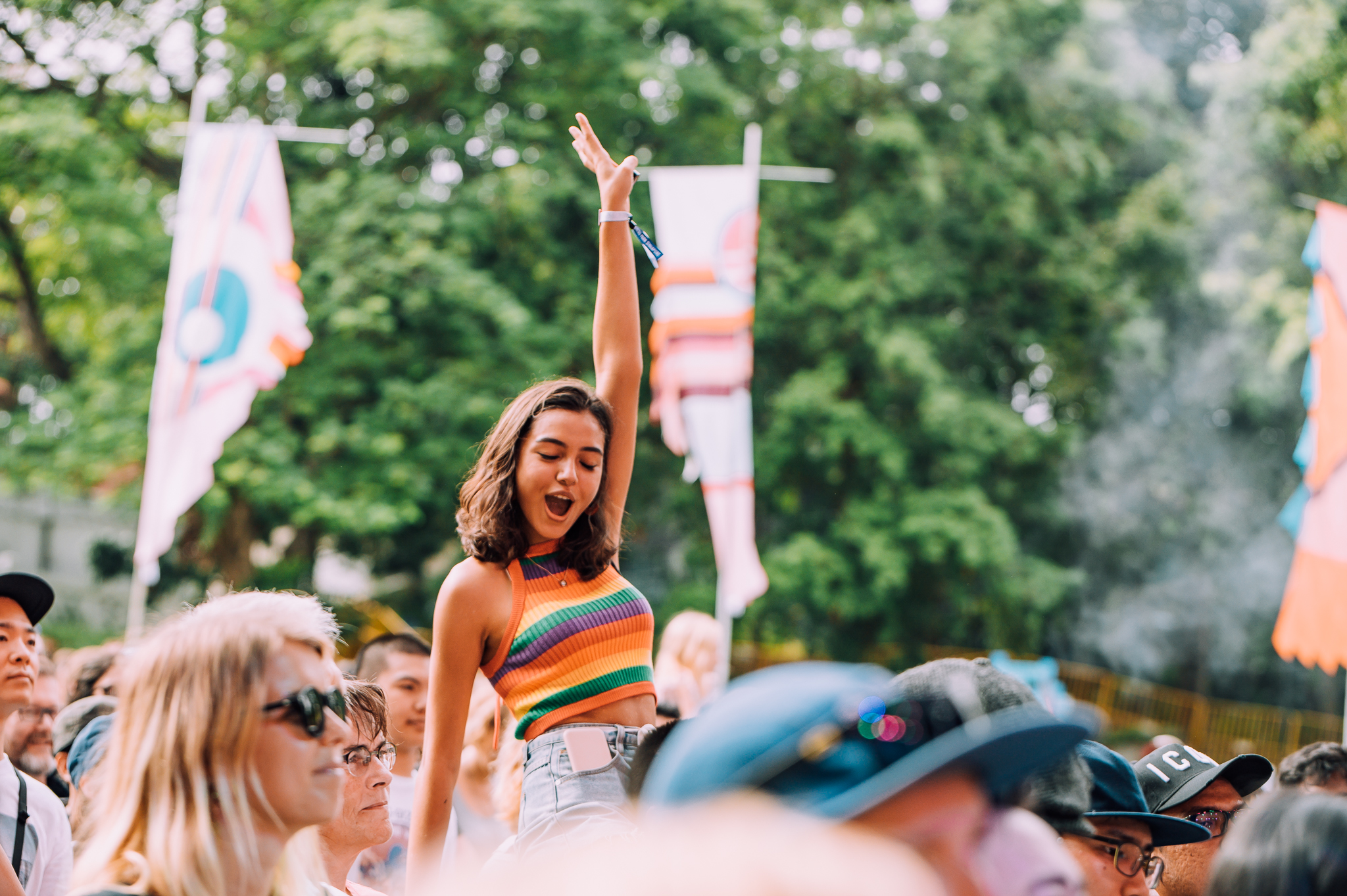 That then, perhaps best encapsulates Neon Lights in a nutshell – a music and arts festival that features top class talent, from the new to the seasoned, introducing those present to fresh beats alongside the favourites they showed up for, sometimes surprising audiences with just how good they are. Neon Lights 2019 may have faced its fair share of challenges and issues, but in spite of the rain, in spite of the cancellations and in spite of the queues, it still delivered one heck of a good show for all those present, if they were just willing to go forth and discover all that it had to offer.

0 comments on “Neon Lights 2019 Wrap-Up: Music That Brings People Together, Rain or Shine”