Sugar, butter, catchy songs and a winsome lead marks a recipe for a musical deserving of a blue ribbon.

LONDON – It’s frankly quite impressive how even the most independent of films have become hit Broadway musicals, elevating the original source material to new heights thanks to the musical form. With Waitress, a new West End transfer adapted from the 2007 film of the same name, the show marks what is quite possibly one of the sweetest new musicals to grace the West End this year.

Directed by Diane Paulus, with a book by Jessie Nelson, Waitress follows Jenna (Lucie Jones), a waitress and expert pie-maker with far bigger dreams than the diner she works at and abusive marriage she’s trapped in. When she gets pregnant, meets the hot new gynecologist in town and learns of a pie contest whose grand prize could change her life, she decides it’s time to make a few decisions that could put her on a brand new path to success. While its plot sounds by the numbers, the execution of Waitress is anything but, and winds up delivering a surprisingly mature storyline of independence and womanhood in small town America, while still being a joyous romp from start to end. From the moment one steps into the theatre, one is already greeted with a whiff of calming vanilla essence, getting audience members hungry for the rest of the musical to come. With songs and lyrics by Sara Bareilles, the indie artist’s pop compositions are melded with Broadway sensibilities to make for a thoroughly unique soundtrack.

Cheeky, energetic and full of heart, most of Jenna’s numbers are a real challenge for even the most seasoned of musical theatre performer, requiring powerful vocals in addition to perfect enunciation while still emoting the character’s can-do spirit. In this respect, Lucie Jones does a spectacular job, showing off her finely honed voice that goes from dreamy in ‘What’s Inside’, all the way to emotional showstopper ‘She Used to Be Mine’ towards the end of Act 2. Jones does especially well in mid-Act 1 number “What Baking Can Do”, her voice delicate and filled with hope as Jenna recalls her late mother’s own baking habits and passing on that love to her. 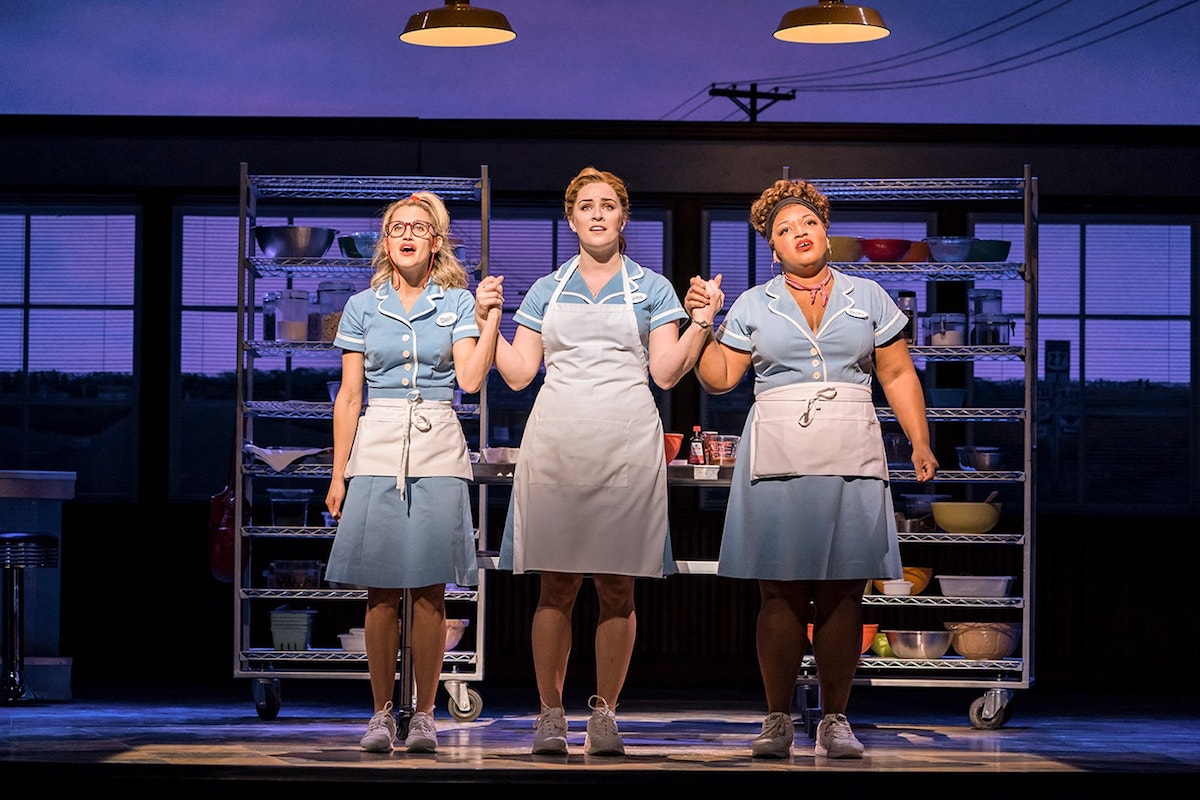 Jones’ onstage chemistry with the rest of the cast is part of what makes Waitress such a delight to watch. There is an all-American, Southern sweetness in Jones’ performance, laced with a quiet, determined strength to her persona that makes Jenna one we root for throughout the musical. There is a vulnerability and innocence to her character that makes us want to reach out and protect her, yet a fierce inner fire that makes us want desperately for her to overcome the odds she’s been saddled with and find success in her pie business dreams.

Joined by fellow waitresses Becky (Charlotte Riby) and Dawn (Laura Baldwin), forming one heck of a vocal team as they cruise their way through numbers like “The Negative” and “A Soft Place to Land”, the trio’s voices come together to bring out their unbreakable friendship. Watching the girls in action, you can’t help but admire and feel the girl power emanating from all three as they stand together in solidarity, supporting each other, never judging, and simply being there for each other, something we could stand to see a lot more in today’s distressing world. Precisely because Jenna is a heroine we root for so much, there’s real pain and fear we feel for her when she faces the wrath of husband Earl (Peter Hannah, terrifyingly toxic as he shuttles between cloyingly sweet and the brink of madness), hoping that she tears herself away from him somehow. We fear for her and her baby’s safety the moment he raises a hand to her, and the tension on stage is raised tenfold each time we cut to a scene within their household, knowing that Earl could appear to wreak havoc at any point of time.

It’s really no wonder she feels such an electric attraction to visiting gynaecologist Dr Pomatter (David Hunter), whose personality seems the polar opposite of Earl’s. When placed together onstage, Hunter and Jones’ chemistry is passionate and believable. Each time the two meet, one can practically see the sparks flying between them, such as in the sexually charged, animal desire felt in Act 1 closing number ‘Bad Idea’ as Jenna and Pomatter begin what results in a hot-blooded affair they cannot tear themselves away from. While Jones is no doubt the star of the show, Hunter is a skilled powerhouse vocalist in his own right whose voice blends especially well with Jones’, bringing out his character’s charms in “You Matter To Me”, a single, tender moment of love between the two that makes us want them to be together, despite Pomatter already being married. Waitress is a remarkable show that allows even its side characters a chance to shine along the way. Awkward Dawn’s storyline sees her finding a beau in equally awkward Ogie (Blake Harrison of Inbetweeners fame), displaying strange antics and declarations of love each time they meet with songs like ‘I Love You Like A Table’ for some great moments of comic relief. Cantankerous boss Cal (Stephen Leask) and smarmy diner owner Old Joe (Andrew Boyer) round off the main cast, each adding their own brand of short-tempered rage or razor sharp remarks to the performance for a dose of realism against the fluffy optimism held by the rest of the characters. Each character’s physicality is distinct and feels uniquely theirs as they move across the stage, precise yet natural even when they’re leaping on tables or making big confessions. 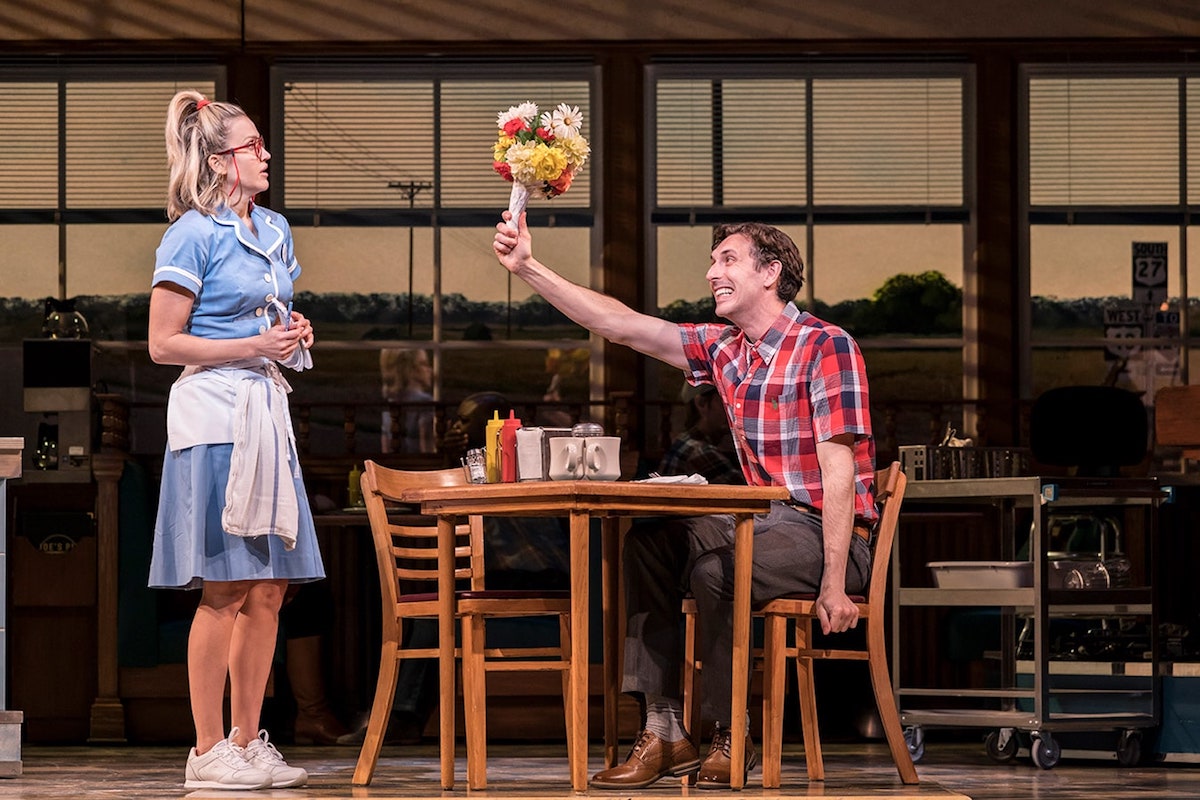 Beyond the cast and performances, the most impressive thing about Waitress is Scott Pask’s gorgeous set that locates us firmly in small town America, with sprawling pastel skies and the feel of a simple diner off a highway. Set changes are incredibly smooth, with entire rooms and clinics coming down onstage in one scene and sliding offstage the next, and as the audience, we feel this shift on the stage too, with Jenna and Earl’s home feeling distressingly claustrophobic, while the diner scenes feel lively, rippling with energy from hungry customers hanging out. These seamless transitions are helped by Diane Paulus’ direction and Lorin Latarro’s choreography, with clever incorporation of the ensemble into numbers by having them sing from diner booths or turn around to reveal surprise pregnancies while the set changes in the background, allowing the entire production to feel like a single movement, with little to no gaps breaking the flow. All of this together then, is Waitress’ recipe for success – joyous numbers, a winsome cast and a storyline that seems typical at first, but will likely end up surprising even the most seasoned of musical-goers. There is a constant threat that the thin layer of happiness Jenna has built up for herself is about to collapse at any point, and Waitress does well to strike a fine balance between giving her these temporary escapes, and the eventual maturity she is forced into adopting as she accepts that real life isn’t always as simple as baking a pie. Waitress then results in a a realistic ending, giving all our protagonists proper, satisfactory closure, even if it isn’t your typical one. While sugar, butter and flour may structure this all-American musical, it’s the secret ingredients of love and friendship that propel it to a blue ribbon victory, and one that’s sure to warm every audience member’s heart.

Waitress plays till 4th January 2020 at the Adelphi Theatre, London. Tickets available from their website

0 comments on “In London’s West End 2019: Waitress at the Adelphi Theatre (Review)”