The American Dream as seen through the rise and fall of a 160-year dynasty.

LONDON – When top global financial services firm Lehman Brothers collapsed and went bankrupt in 2008, the world economy plunged into a recession, one that it continues to struggle with even today. But who exactly were the Lehman Brothers, and how did an empire as magnificent as this collapse so quickly in the blink of an eye?

Adapted from Stefano Massini’s Italian play by Ben Power and directed by Sam Mendes, The Lehman Trilogy is not about the collapse of the entity, but its origins. The lengthy epic of a play spans three hours, and charts the company’s humble beginnings as a small family affair (the literal Lehmans) to the eventual economic monster it would become, before a quiet death as it is sold off, the Lehman descendants no longer possessing any part of it at all. 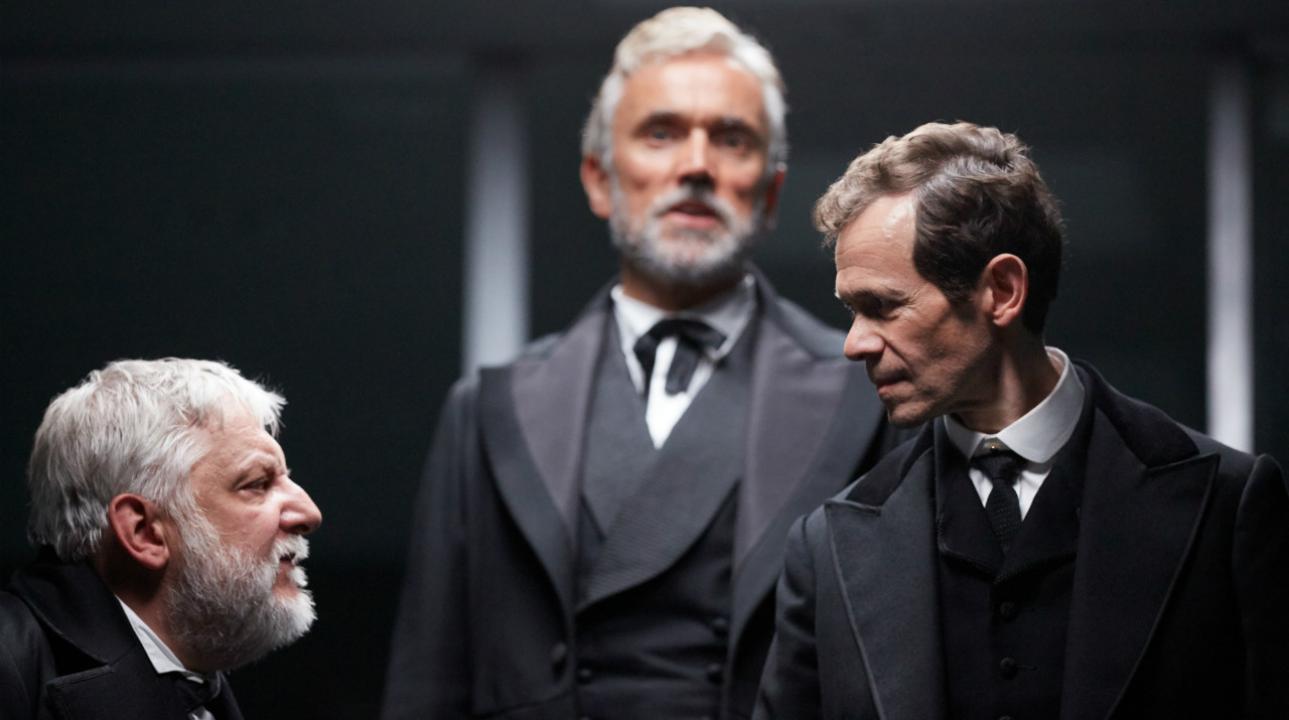 The Lehman Trilogy (so named for the three acts it spans, across multiple generations of Lehmans) begins in 1844, with the arrival of brother Henry, Emanuel and Mayer Lehman on the shores of a New York dockside. This is a story of survival and the history of a dynasty, of immigrants forced to change their names as they carve out a new life for themselves. It reads almost like a fairytale, a morality tale of triumph and the once glorious American Dream with its belief of people coming from nothing, finding success. Each of the three brothers are given clearly fleshed out characters, further differentiated by all three physically distinct veteran actors playing the roles (Simon Russell Beale, Adam Godley and Will Harrison-Wallace). 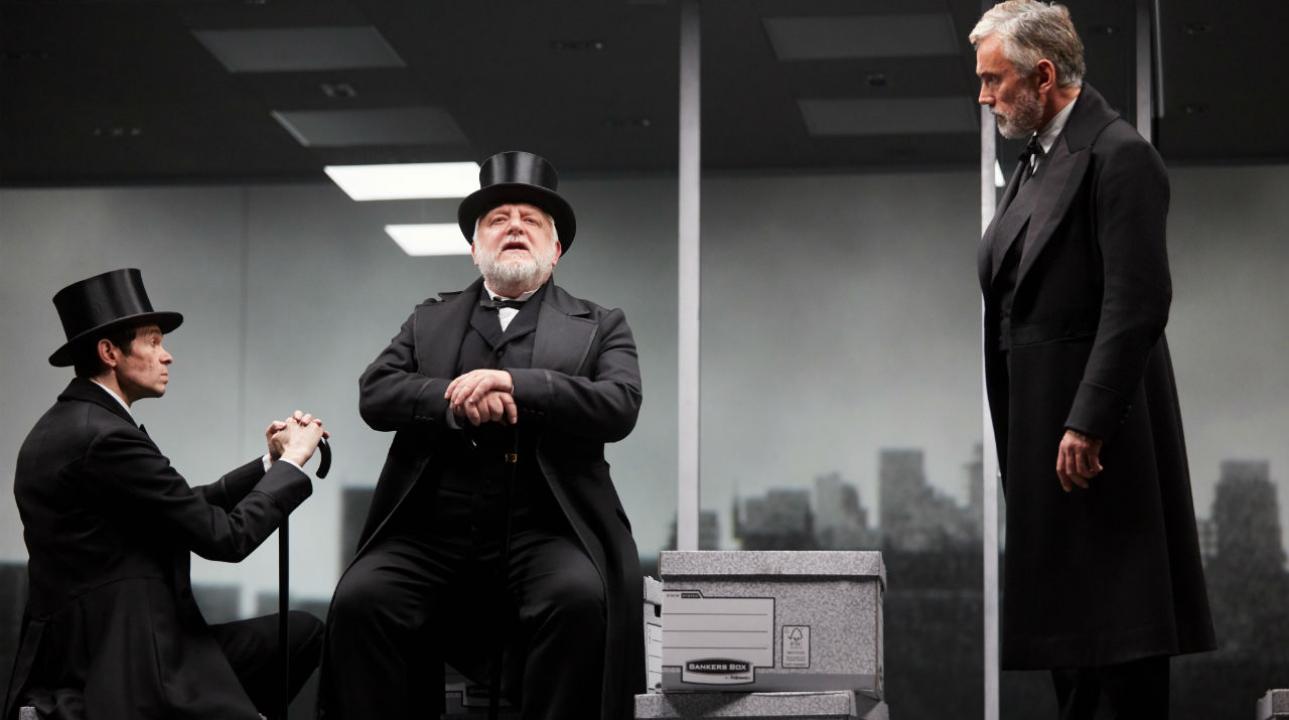 We cannot help but admire this origin story where the brothers, coming from a simple fabrics shop in Alabama, rise to deal in the cotton trade, before somehow involving coffee, before straight up becoming middlemen and setting up the company in New York. Each dressed smartly in long dark suits (designed by Katrina Lindsay), the actors swap between third person narration and playing the characters themselves, the words and dialogue flowing poetically to give the entire play an almost ethereal sense of rhythm. 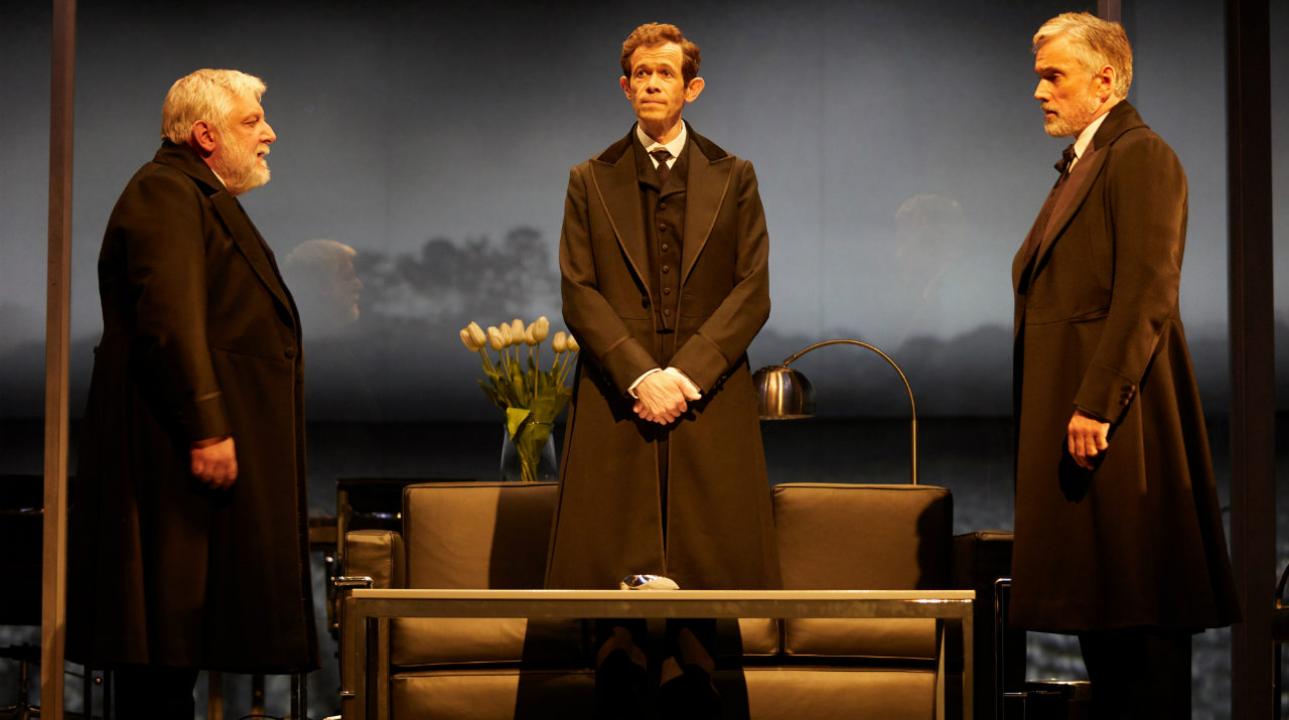 But while initially heroic in their success, the three brothers quickly fade to become memories of the past come the second act as the next generation takes over. The tone here shifts considerably, as the focus changes to that of inheriting legacies, and the circumstances the inheritors find themselves in is ripe for drama as they face new challenges in a volatile economic world and the stress of maintaining the success of their forebears. Far darker and more pessimistic than Act 1, there is an overbearing sense of dread that characterises this segment of the show, and we cannot help but already sense that the Lehman descendents have fallen into a hole they cannot extricate themselves from. 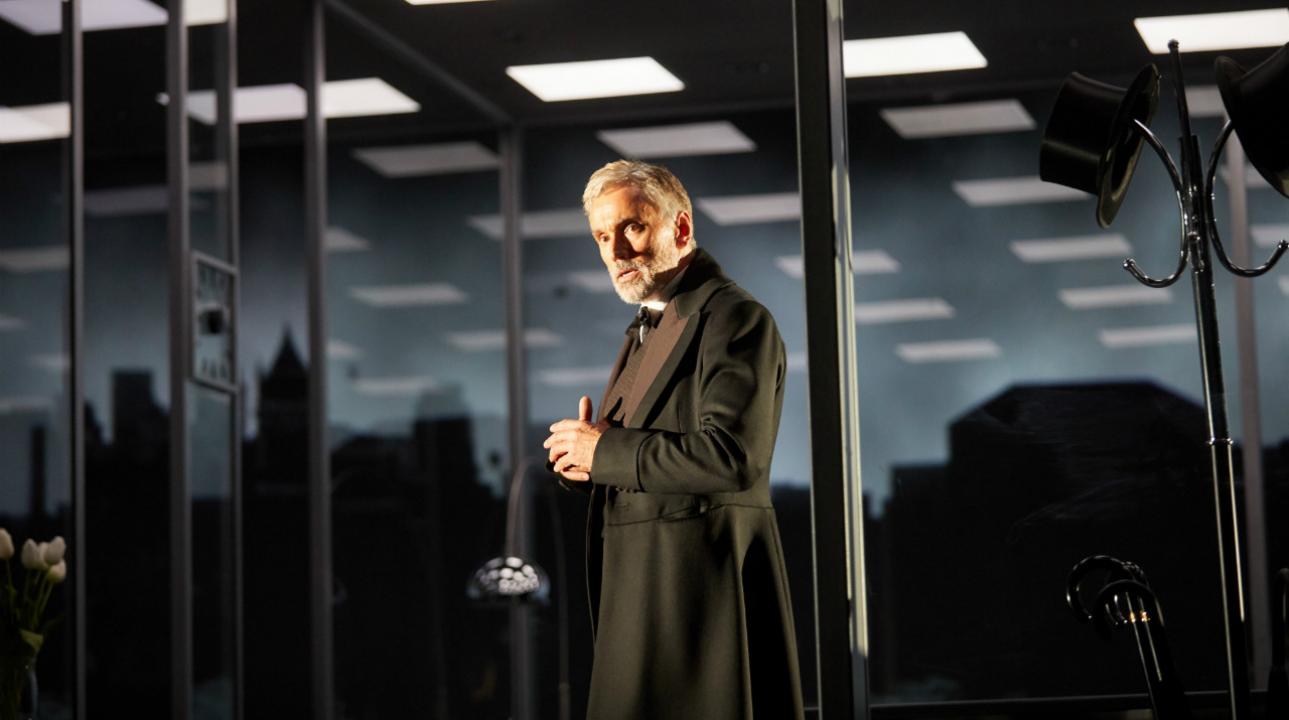 Much of the drama is enhanced thanks to Es Devlin’s simple yet effective set – a revolving platform upon which stands a white and grey cubical office space, with enough furniture and freedom to transform each scene accordingly. This is supported by Luke Halls’ black and white video projections, as well as live pianist Candida Caldicot, whose work helps immerse audiences into each era, the muted colours reflecting the dour mood felt throughout. One could even see the set as a strange form of purgatory, with the actors playing various members of the Lehman family, trapped in this cubical hell for all eternity and generations to come, and so closely associated with their business that they cannot escape it. 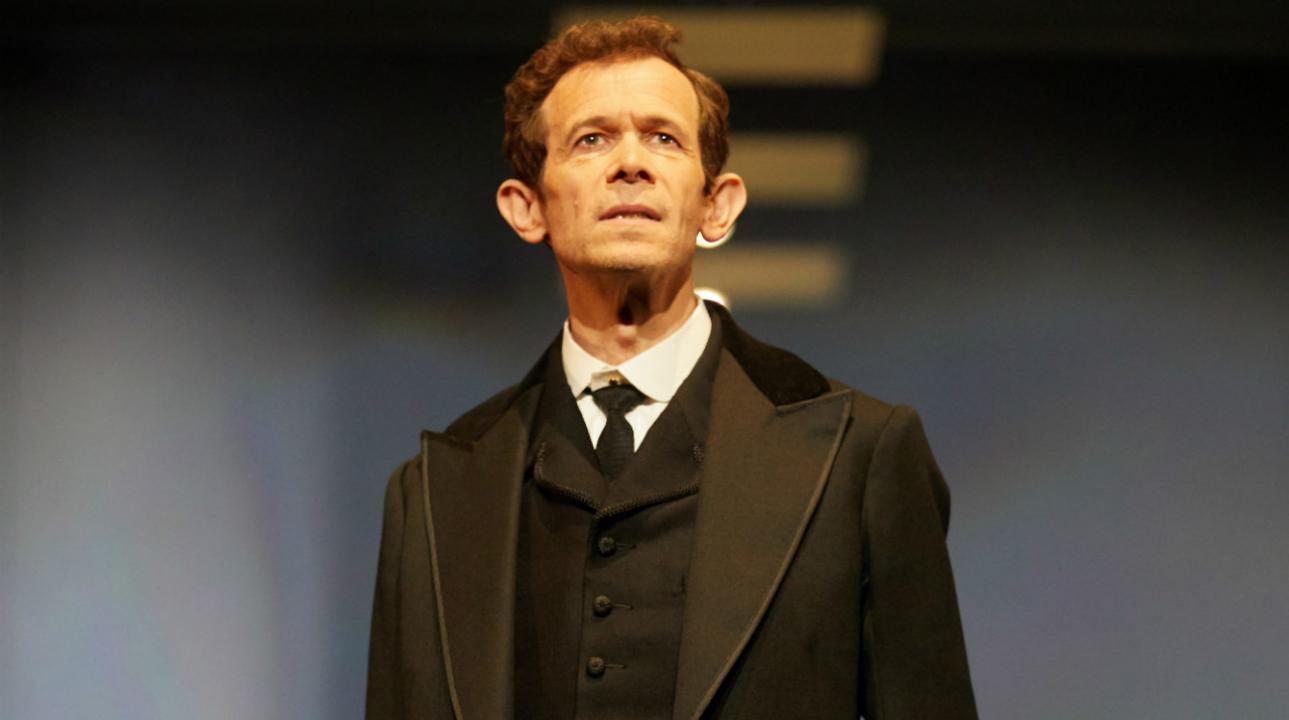 By the time we reach the final act, so too do we finally reach the end of the Lehman Brothers, as their prior successes give way to tragedies one after another. While the Lehmans have always miraculously, barely bounced back from one disaster after another, allowing us to root for them and hope for their success once again, there is an undeniable hopelessness that pervades this final act that makes us realise that their luck has finally run out.

One particularly poignant scene makes reference to Noah’s Ark and days of flood, a seemingly eternal rain heard falling over New York as the set revolves continuously, the various Lehmans pacing the set as they figure out how to solve a particularly distressing conundrum for the company. When we reach the 1960s, it hits us hard when we learn of the stock market crash, and hear of the countless stockbrokers leaping off buildings and plummeting to their deaths, fearing being unable to ever recover from the disastrous crash. Even when they do succeed in bouncing back from this, the Lehmans are now old and shadows of their former selves and ancestors, with children of their own with no desire to take over the company, effectively rendering the company bloodline coming to a standstill. 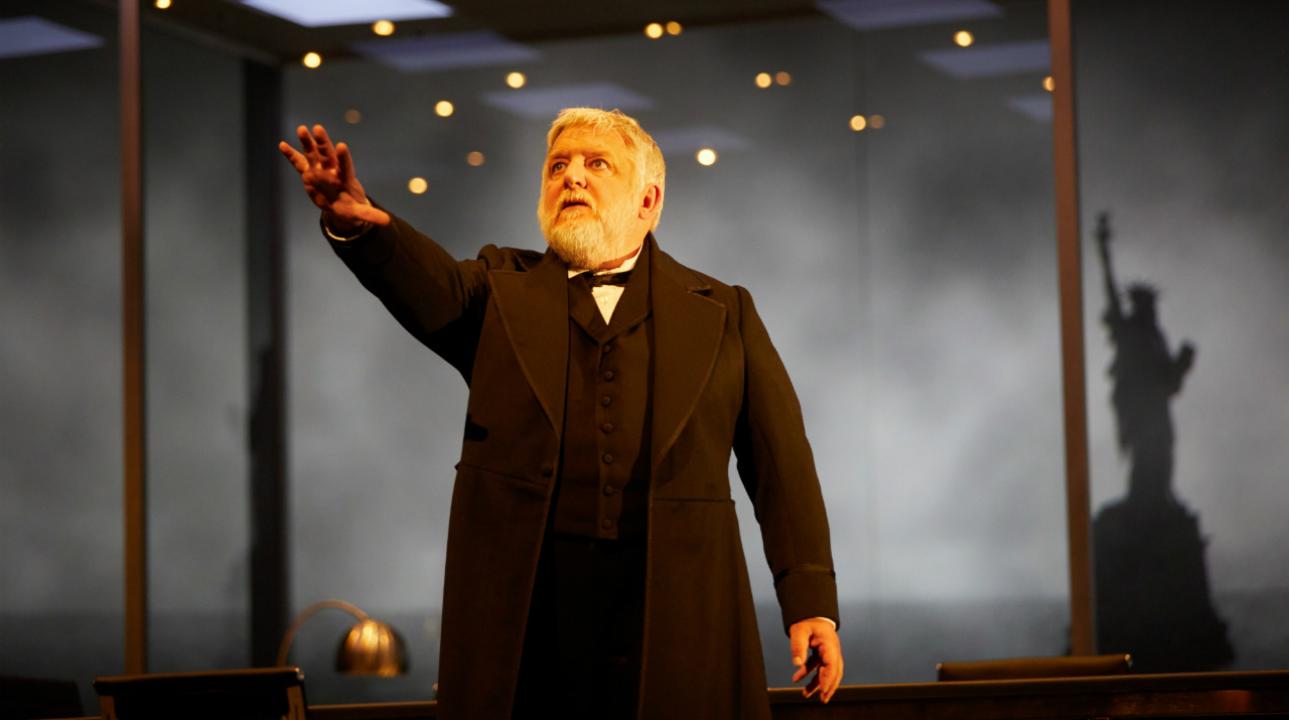 What is initially seen as a triumph of the American Dream is eventually revealed instead to be a tragedy, with the Lehmans going out not with a bang but with a whimper. As they sign control over to buyers from outside the family, the end result is quiet, non-eventful, and we wonder if their presence and role in this empire truly did have any meaning at all, if the process of handing over is so simple. The Lehmans, once dancing in glee at the prospect of generations of fortunes to come, leave with no fanfare, their names the only thing left to history, and their identities and personalities lost to the ravages of time.

In a sense, The Lehman Trilogy almost acts as a form of justice for the Lehmans, whose names have been so smeared thanks to the collapse of 2008, reclaiming them as American heroes in their own right, defying the odds to find such success. Capitalists to the last, the most upsetting aspect of the entire situation is how even though the company responsible for the crisis still bears their name, the Lehmans in fact, have nothing to do with the collapse, having completely relinquished control of it by the time 2008 ran the company into the ground. 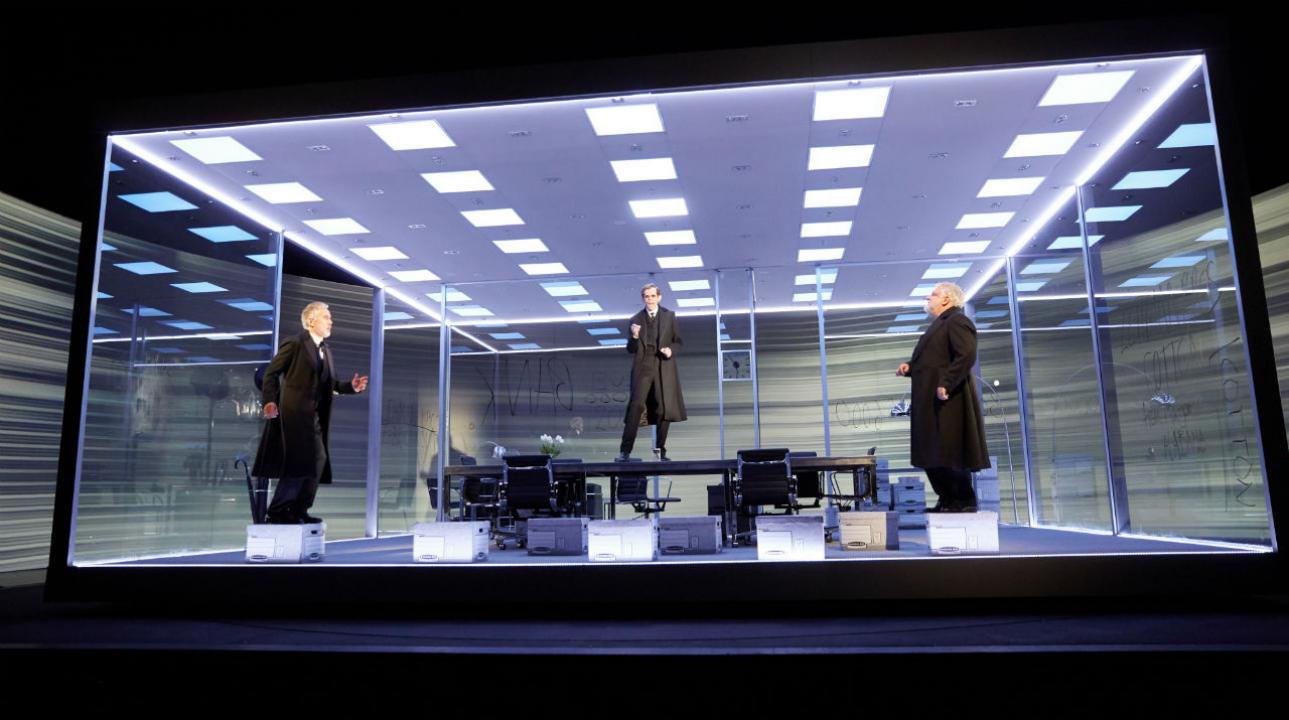 Running at three hours, despite being cut down from the original five hours of the original, The Lehman Trilogy does sag in certain parts, and even borders on indulgent at times, requiring full concentration from the audience to catch every subtle nuance and follow the three actors and they shift in and out of the many characters we come to meet. Director Sam Mendes has a real flair for bringing out the epic from the ordinary, and for making a play about finances feel riveting. allowing us to see and understand the family drama and dynamics at the heart of this sprawling history.

Thanks to the brilliant acting from all three actors, we sense the treachery and the fear in the air, understanding each person utterly, their hangups and their weaknesses and strengths in spite of the limited time each one is given on stage. It’s a marvel how much concentration it takes to maintain the quality of their performance throughout, mostly serious, but managing to break into welcome moments of humour from time to time, and we see each character as quintessentially human, neither devil nor angel as they themselves battle both market forces and insurmountable circumstances. 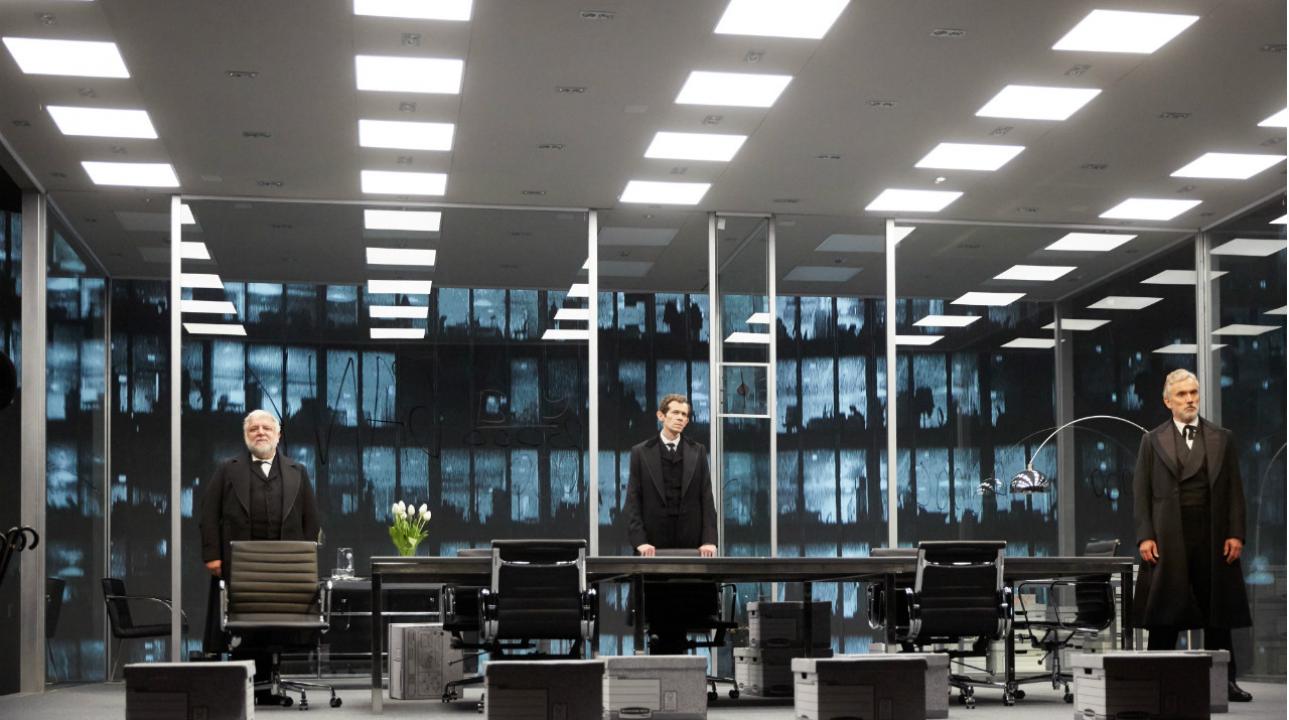 For a family whose dealings are based entirely on the basis of trust and risk, the Lehman Brothers’ luck does eventually dissipate by the end, and that trust completely broken, their family name besmirched. As we watch the final scene of petrified bankers in 2008 anxiously watching a single screen, horrified as they realise the extent of the crisis they are about to experience, we see The Lehman Trilogy as a historical epic, the rise and fall of a dynasty that results in a tragedy of world-crushing proportions. The Lehmans, once humble immigrants, are felled by their own trust in handing their name to complete strangers, a long, deep scar running not just across their family name, but across the world. 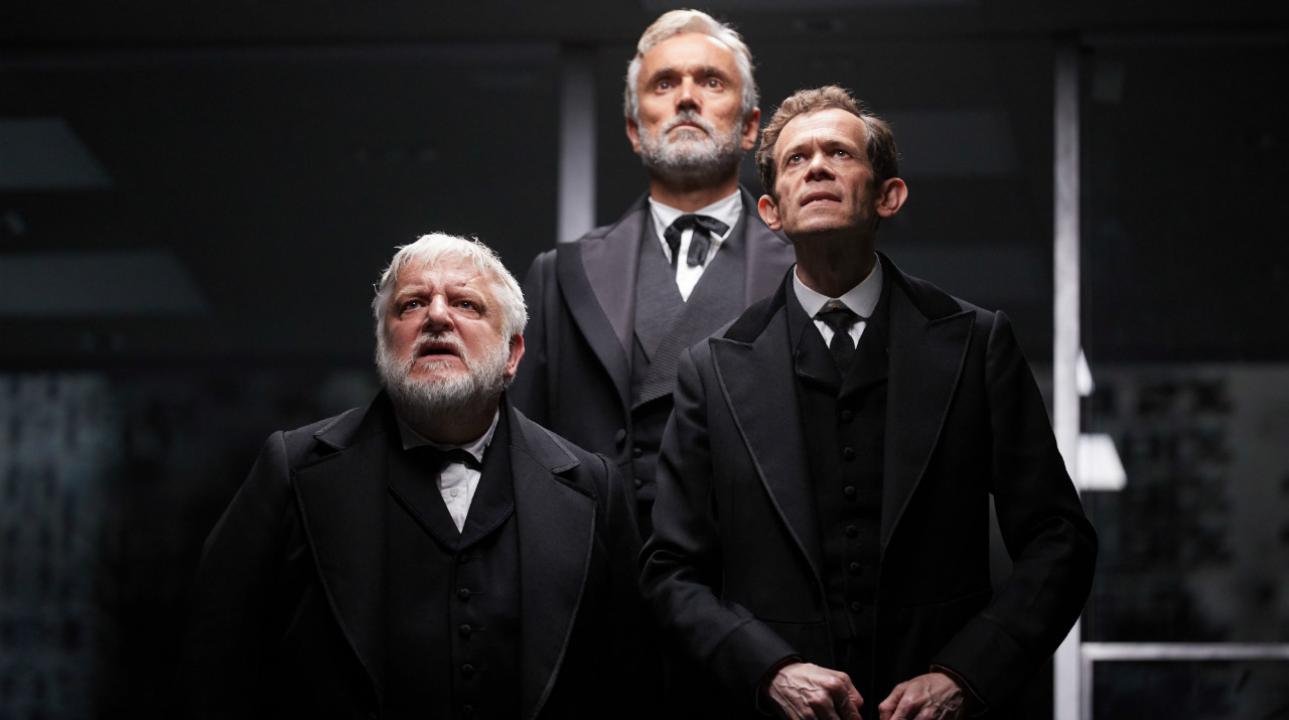 Moving like an unpredictable market as the Lehman fortunes rise and fall erratically over the play, we find it in ourselves to pity the Lehmans today, remembered not for their successes but their failures, and feel an insurmountable weight upon our souls, as we sense the overbearing shadow of capitalism and greed, and realise the eventual futility of the American Dream. Trust me, they say, time and time again over the years. But it seems that not even the most successful financial company out there can make a promise as big as that, that fragile trust now shattered forevermore.

The Lehman Trilogy played till 31st August 2019 at the the Piccadilly Theatre, London.

0 comments on “In London’s West End 2019: The Lehman Trilogy by National Theatre (Review)”