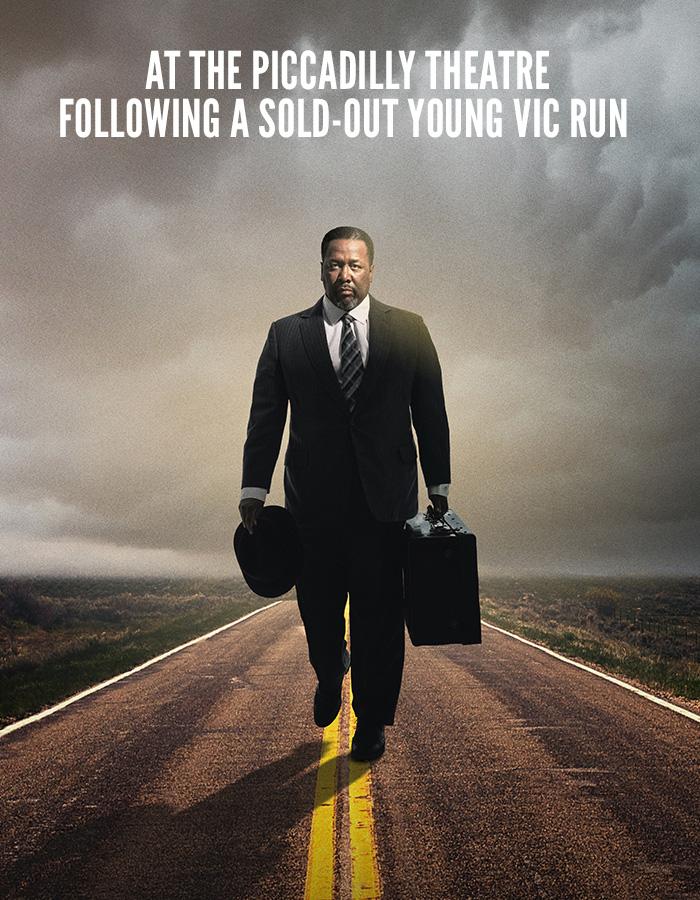 ★★★★☆ (Performance attended 4/12/19)
Arthur Miller’s classic play of the collapse of the American Dream feels urgent and racially charged in this new version by the Young Vic.

LONDON – For anyone who’s ever studied Death of a Salesman in school, Arthur Miller’s classic play is iconic as a symbol of the American Dream crashing down, with the titular death representing everything wrong with the relentless, unforgiving capitalist economy.

But in the Young Vic’s new version directed by Marianne Elliott and Miranda Cromwell, the already iconic play has been elevated further still, thanks to its choice of recasting the Loman family as black, with Suits’ Wendell Pierce starring as the long-suffering Willy Loman. No longer is this play merely one of the failings of capitalism and those it leaves behind, but shines a spotlight on the ones who never had a chance in the first place, for whom suffered a glass ceiling on account of their skin colour, and the prejudice they face at the hands of racism dealt out by white superiors. 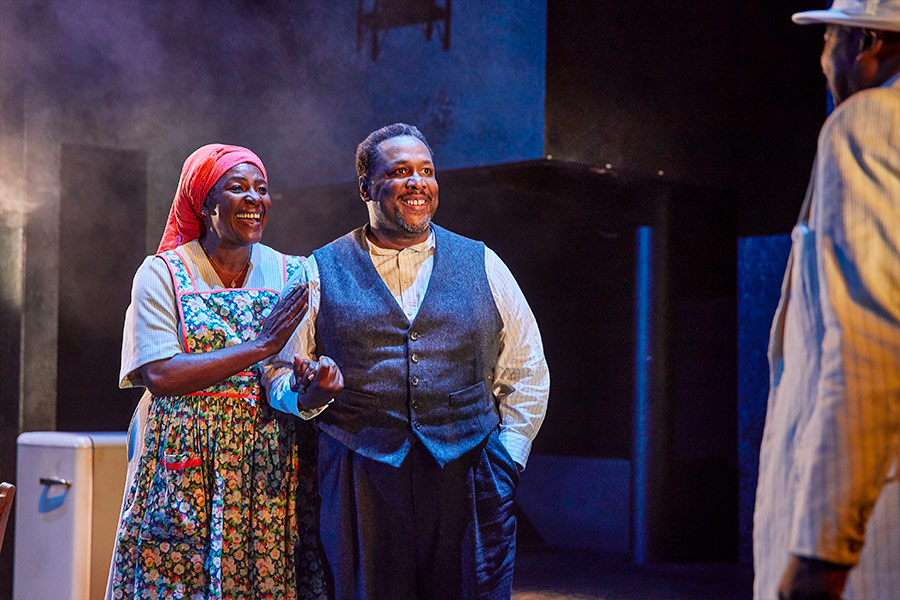 Set in the 1940s, fresh after the Great Depression, Death of a Salesman opens with an introduction to the cast via song (composed by Femi Temowo, and setting us in a black household). The show features a quaint set (with hidden multi-faceted properties, as designed by Anna Fleischle) that brings audience members straight to the simplicity of the American pastoral. 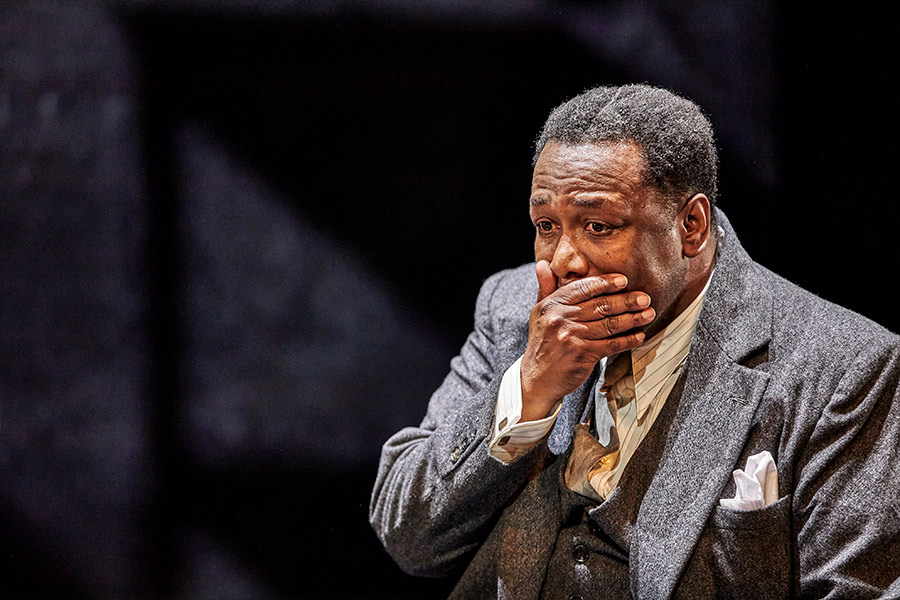 Willy Loman (Pierce) enters, just home from a sales trip, but is immediately questioned by his wife Linda (Sharon D. Clarke) on how bad business has been. The two look out the window, and think back to how simple life was before, seeking solace and comfort away from the complications on the modern day. We then meet both of Willy’s sons in their room – the elder, ex-football star Biff (Sope Dirisu) and younger brother Happy (Natey Jones). Both men discuss their future, dreaming, hoping for something better still to come. 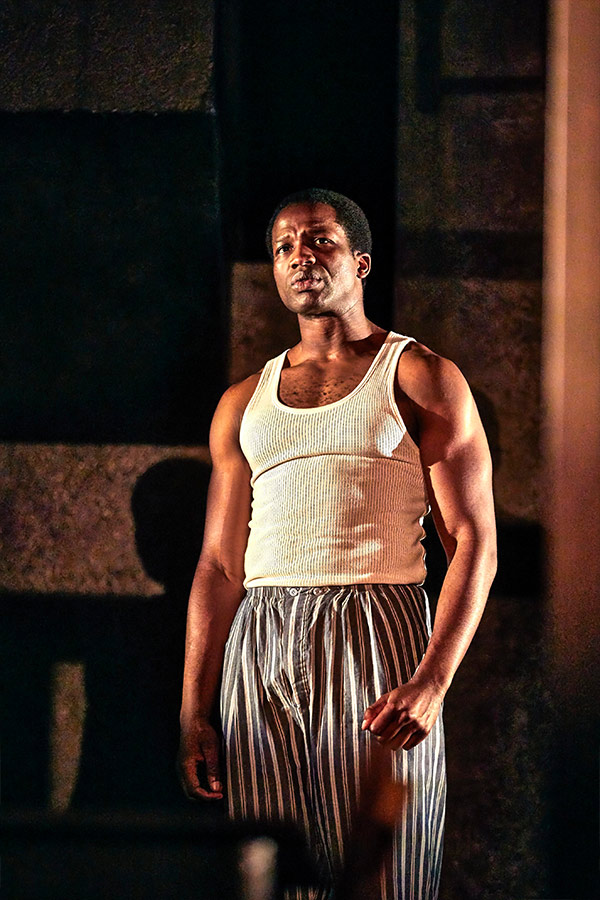 Returning to Linda and Willy, it is revealed that the family is in dire financial straits, with Willy not even having the $120 required to pay their insurance. It’s a troubling scene, and Linda asks Willy to ask to be stationed in New York instead. Flashing back and forth between Willy’s past and the present, we catch glimpses of the mysterious woman (Victoria Hamilton-Barrit) Willy has history with. It is almost as if we go in and out of dream and reality, no longer able to tell what is real from the surreal and leaving the audience uneasy. 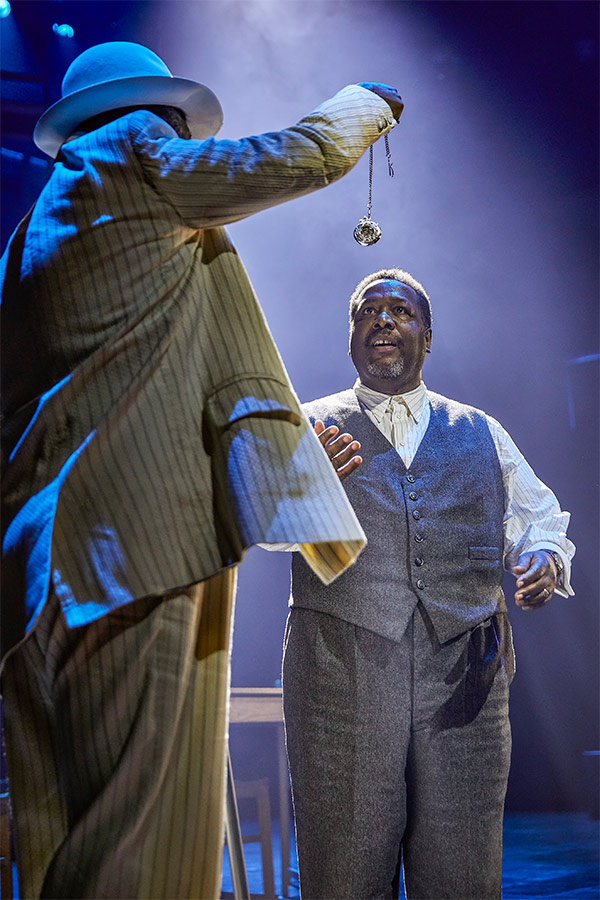 With Willy having worked for 36 years already, he is exhausted. Life has changed dramatically for this 63-year old man. Both sons continue to question why he doesn’t do more, to the point that even Biff begins to call Willy a fake, much to Linda’s chagrin. When it is revealed that Willy has been harbouring suicidal tendencies, both sons are left shocked by this reveal. 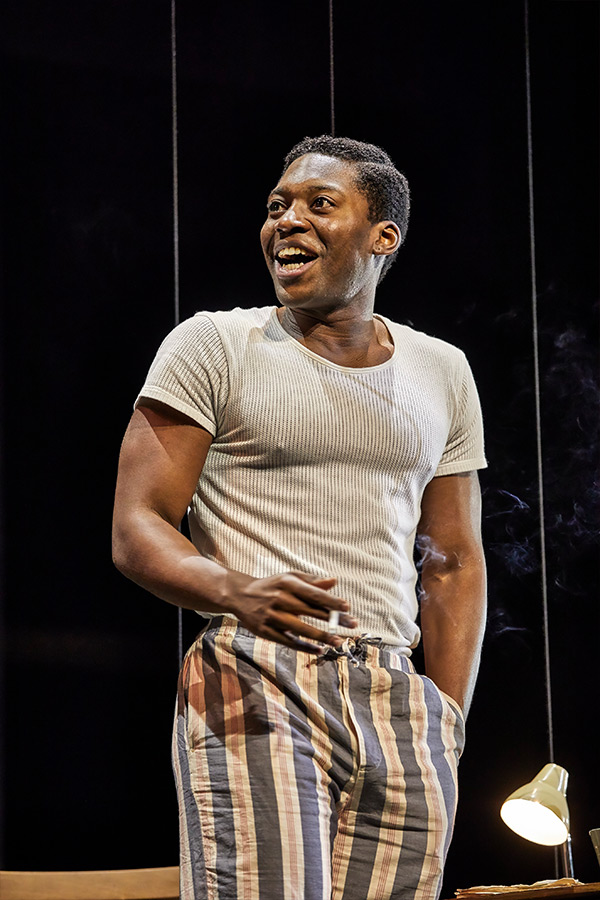 As Act 1 draws to a close, Willy returns to the room, it’s clear how much Willy cares for his sons, and how the Loman family dynamics is well and truly the centrepiece of this play. We see how the stage is split into two scenes, with Willy heading to bed and Biff in the corridor smoking. It’s smart staging to showcase the parallels between the two, and both of them look out the window simultaneously, almost as if reflecting on what is to come and what has happened. We feel for the troubled family, and want desperately for them to claw their way out of a hopeless situation. 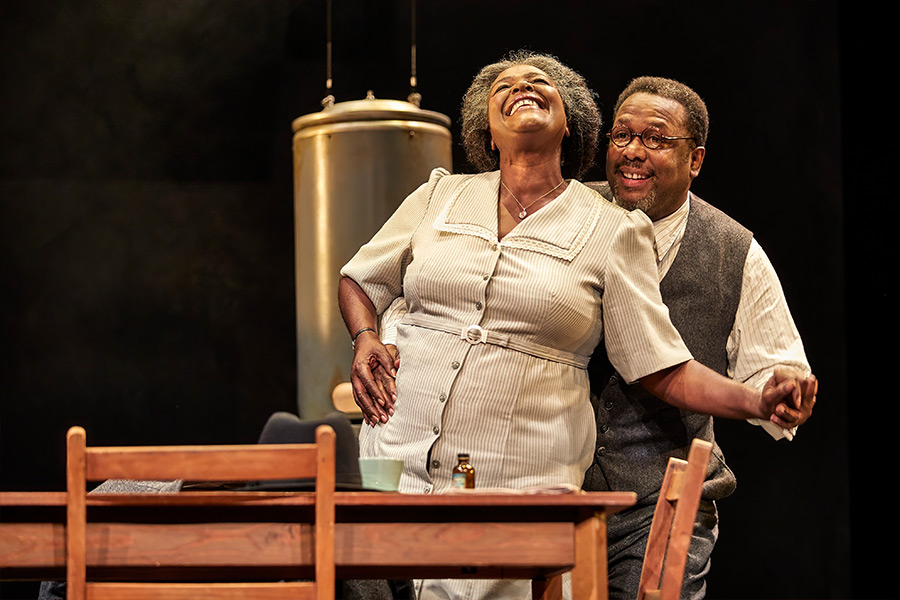 Returning from the intermission, things seem to finally be looking up for both Willy and Linda as they embrace each other in a dance, talking about how they are finally, almost about to pay off their 25 year mortgage on their house this very month. Biff calls, and Willy goes off to work in high spirits and full of optimism.

Yet the happiness doesn’t last. Willy meets his boss Howard (Matthew Seadon-Young) in the office, and the disproportionate power is made clear not just by the racial politics informing the scene, but with how Howard talks over Willy, never allowing him to speak. When Willy finally gets the chance to tell his story, Howard is nonchalant and dismissive, merely sitting down and putting his leg on the table, disrespecting him and turning down Willy’s request to stay in New York for the job. 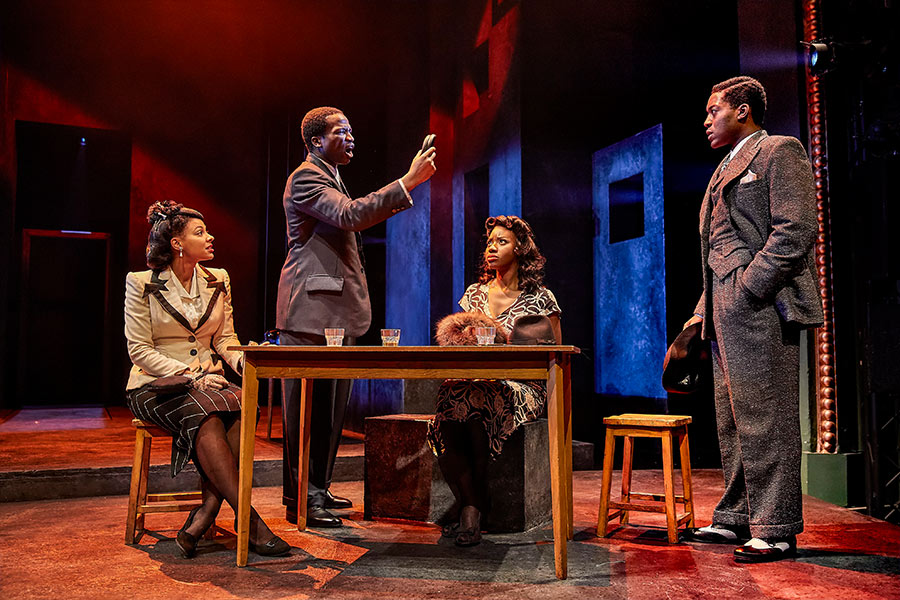 To make matters worse, Howard then tells chastises Willy for not doing a good job, and suggests he take a leave of absence, coming back only when he’s feeling better to talk about a job. A small but important detail director Elliott has included here is how Howard removes his valuables from the office before leaving, indicative of how he doesn’t trust Willy, taking steps to prevent him from theft. Howard, as the stereotypical ‘old white man’, is representative of the systemic prejudice that impedes the economic progression of the blacks in America. 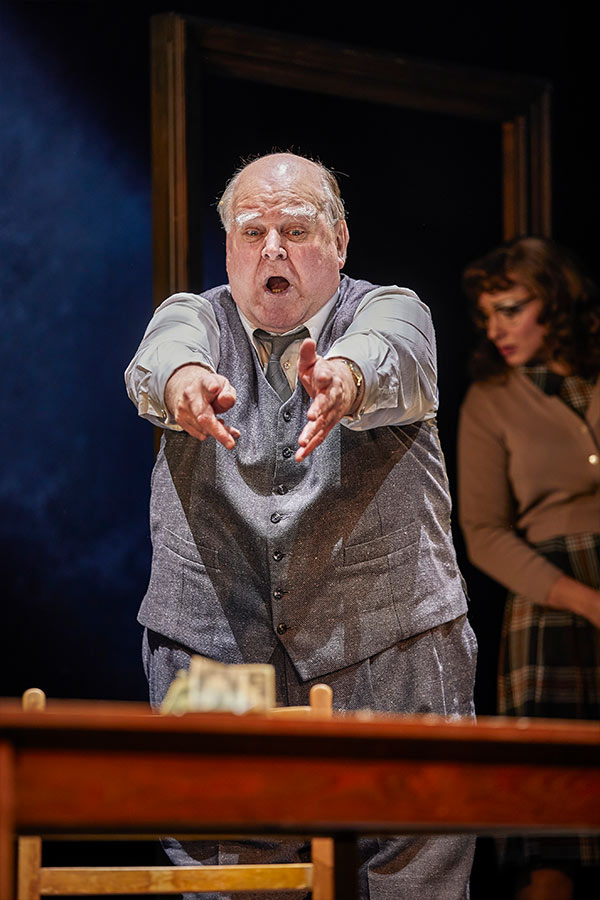 At his wit’s end and with nothing left to lose, he now goes to neighbour Charley (Trevor Cooper) to borrow money. When asked why not work for him, Willy turns him down, and it’s clear that once again, racial prejudice is at play, with Charley expecting Willy to work under him. Deeply discomforting to the audience, Willy finally breaks down and cries. Charley loans him the whole $120, and the stress placed upon Willy almost certainly sets him up for his fall and mental breakdown later on. 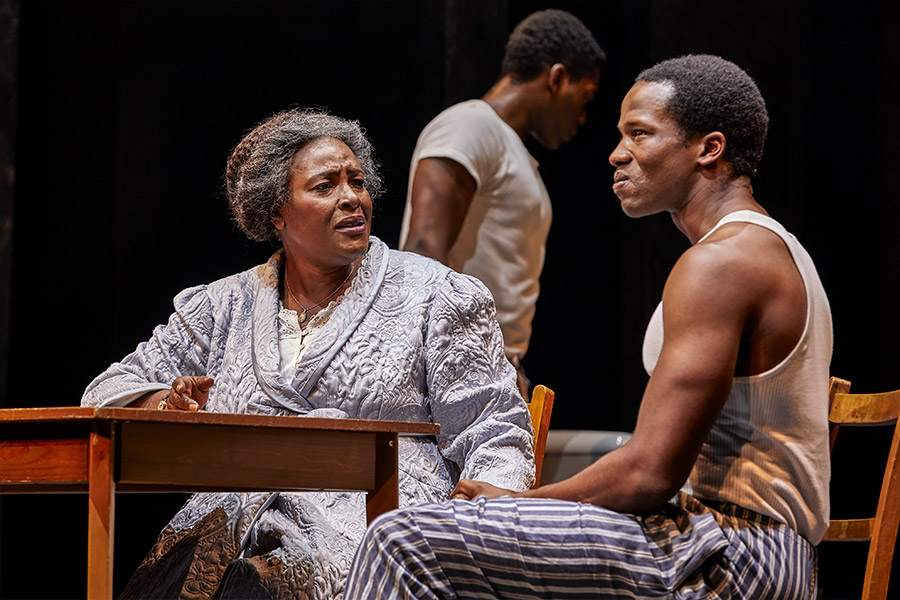 Turning our attention to the jazz bar where Happy and Biff are planning to give Willy a treat, Biff too is subject to racial prejudice, told by the staff that it’s better to sit at the back as the front could get busy. Even in the simple aspects of seating arrangements in public, we see Biff discriminated against, as just moments later, a white man comes in and takes up the very seat Biff is turned away from. Biff then recounts the disastrous job interview he encountered earlier in the day that ended with him stealing his interviewer’s fountain pen. Willy also confesses having been fired, leading the entire table to go silent. The family ends up fighting, almost like a deranged nightmare, well choreographed and directed. 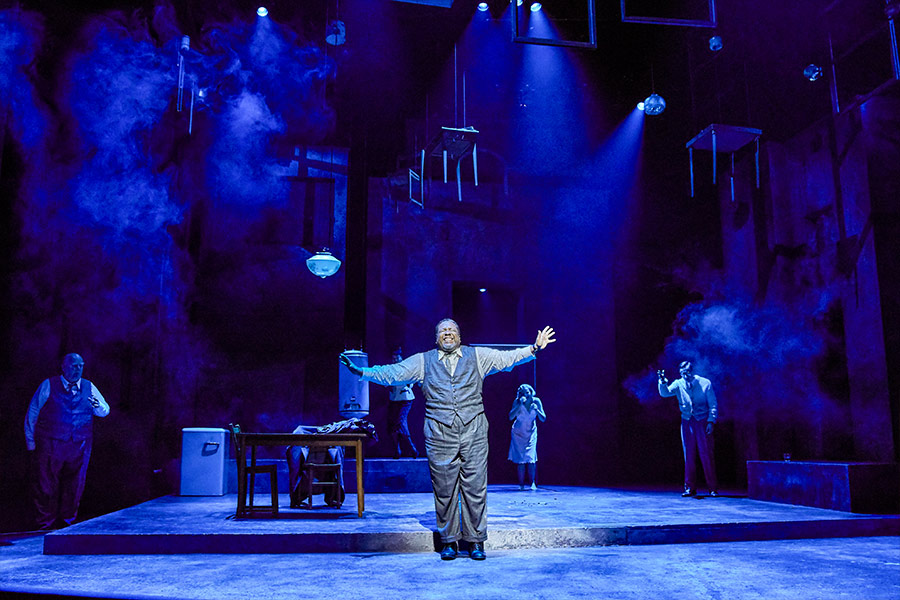 When Willy reveals having cheated on Linda with the woman, dinner ends on an uncomfortable note. We feel the frustration, anger and love emanating from the family, all mixed into a single messy cloud of chaos. Willy then says he got to go, he unable to take it anymore, and starts the engine of the car. With all the pressures surrounding him and the deranged laughter of all those mocking and looking down on him, he drives off into the distances, before we hear a crash, having killed himself. 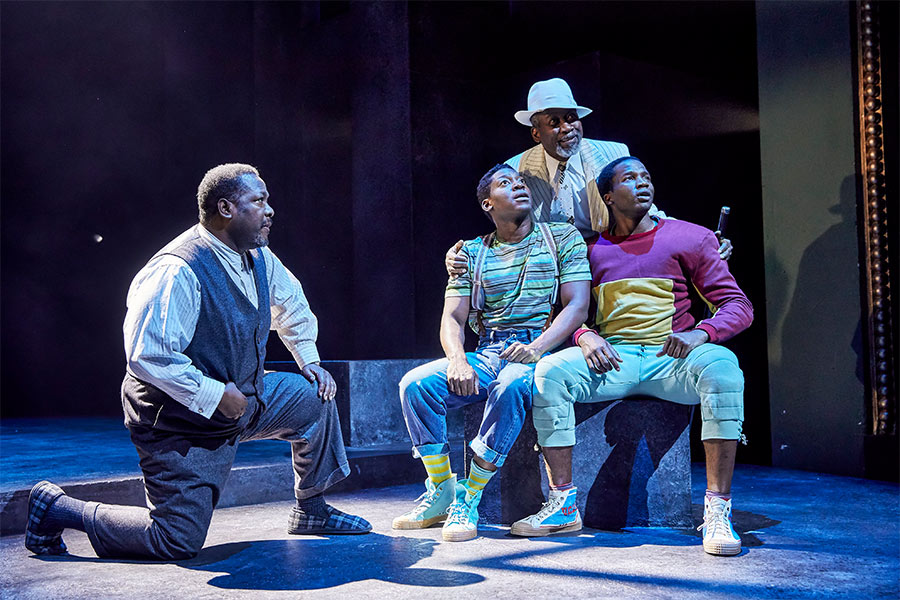 In the play’s epilogue, we see the family at Willy’s funeral, with no visitors save for Charley and Bernard. Linda wonders aloud and seems to recall that Willy was popular and had many friends. Yet the truth is, this was a lie he told himself and his family over and over, and in reality, he ends up alone in death. We see how much sacrifice Willy made to ensure his family always got by, having sacrificed his happiness and his life for their sake. Linda proclaims ‘we are free, we are free’ as she hugs Willy’s grave, finally free from debt with the mortgage paid off, thanks to the insurance incurred from his death. Almost reminiscent of historical freedom from slavery thanks to the sacrifice of many, Willy’s death becomes symbolic of black freedom, and we end Death of a Salesman on a song, just as the play began. Linda is in a state of happiness and sadness, unsure what to feel, and unable to shed tears, as the lights finally go down on this family tragedy, the still uncertain future made a little brighter by bloodshed.

Death of a Salesman ran till 4th January 2020 at the Piccadilly Theatre, London.

0 comments on “In London’s West End 2019: Death of A Salesman at the Piccadilly Theatre (Review)”