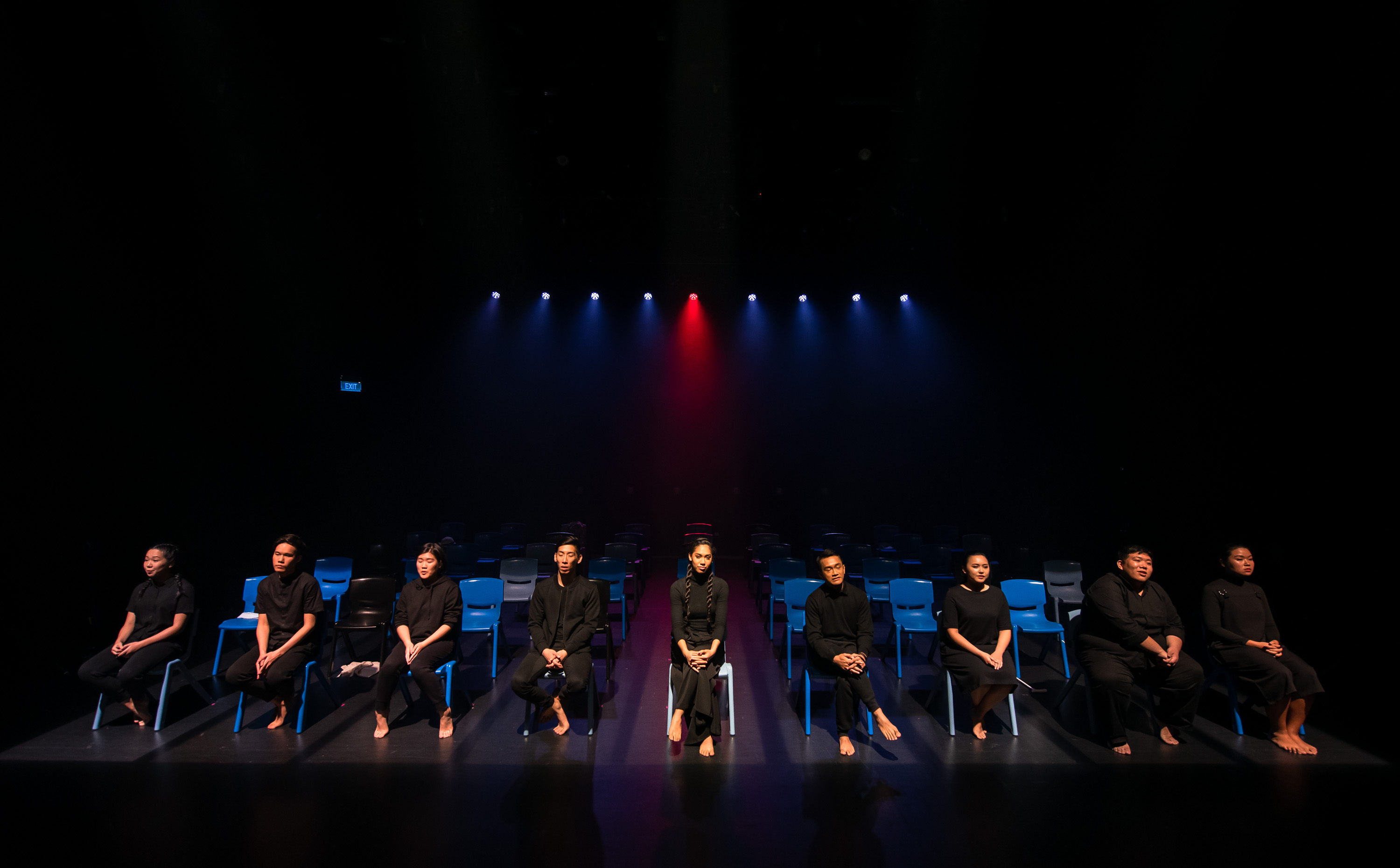 There’s something incredibly audacious about splicing two unlike plays together in an attempt to better bring out their shared concerns. Where Kuo Pao Kun’s Kopitiam was a naturalistic, three-character work in Mandarin concerning itself with an elderly coffee shop owner struggling to understand why his son does not want to inherit his legacy, Alfian Sa’at’s Anak Bulan Di Kampung Wa’ Hasan was a collection of fictitious ‘verbatim’ responses from villagers in Singapore’s last kampong, embodied in and performed by a single actor in Malay. Across both, we sense a constant struggle between two generations, as one wishes to hold on to values of the past, while another wishes to leave it behind and move on, physically, and into the future. 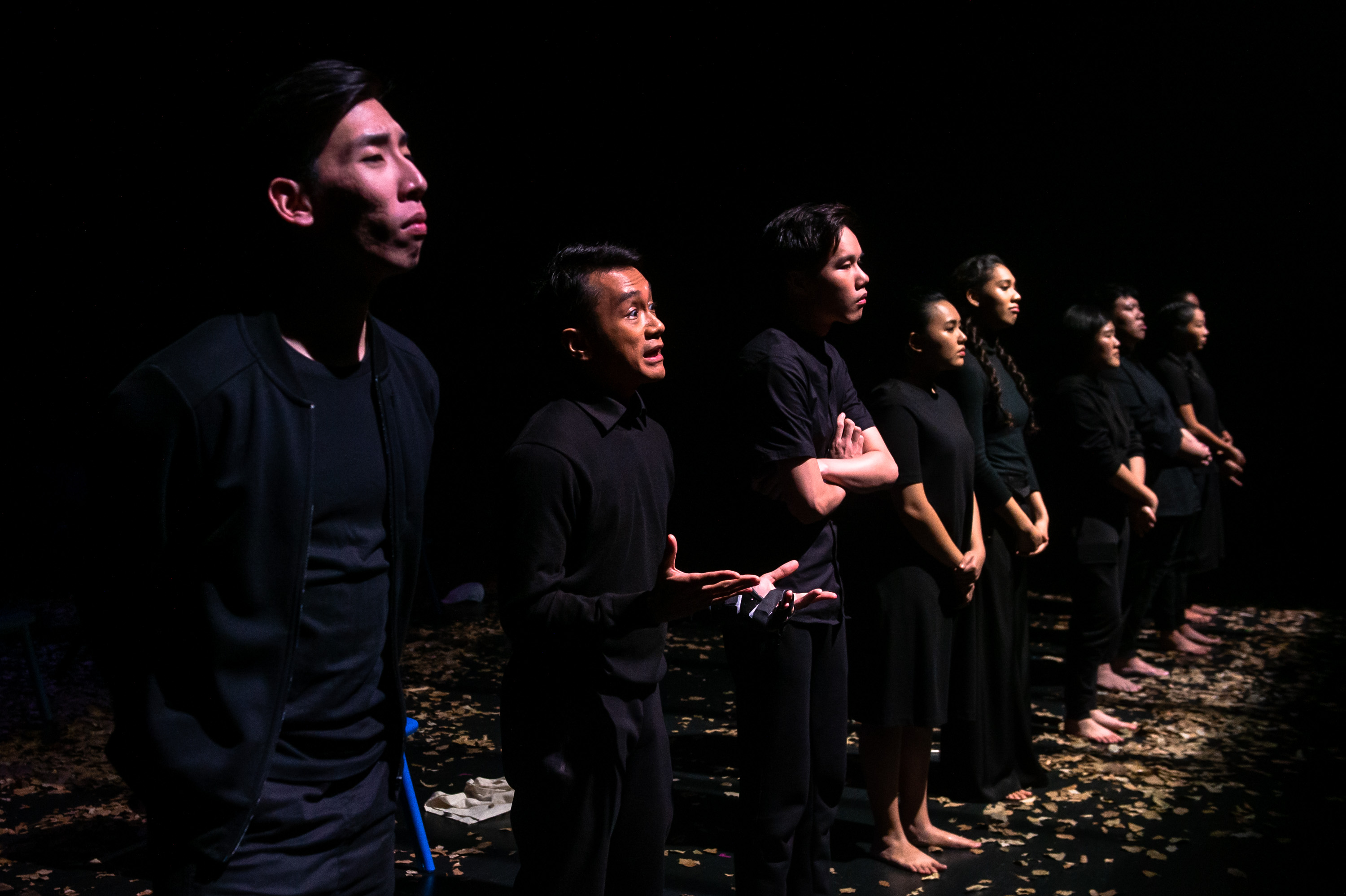 With Oliver Chong’s Contemplating Kopitiam and Kampong Wa’Hassan, scenes from both plays are interspersed with each other and performed in English by BA (Hons) Theatre Arts students from the Nanyang Academy of Fine Arts (NAFA), presenting commentaries on progress by playwrights from both the Pioneer and Post-Merdeka generations onstage. 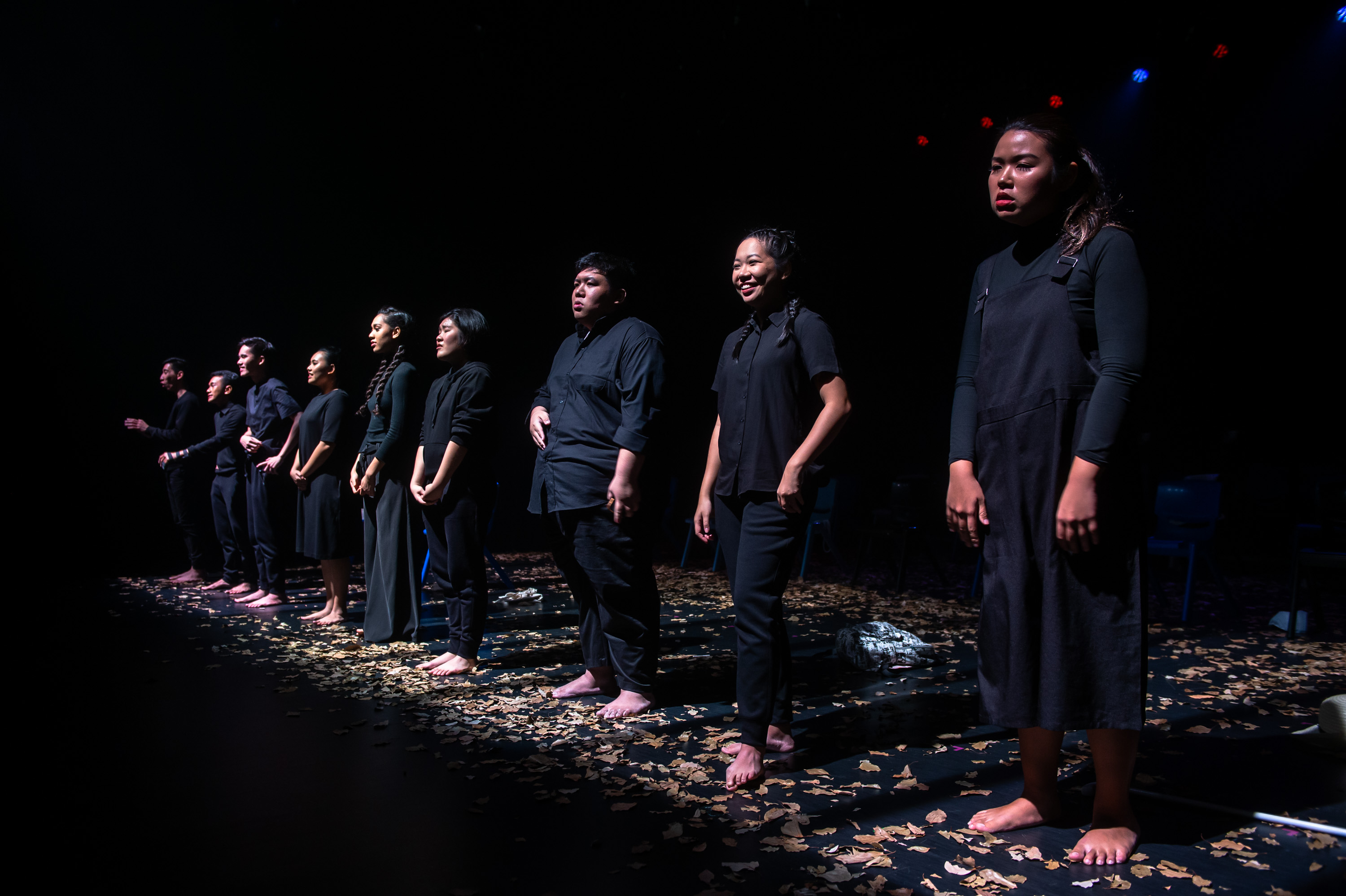 On top of these, Chong also includes scenes where the actors play themselves, delivering actual responses they had to a series of questions he posed to them, reflecting their views of their identity and perception of home. By having the students also perform these plays from generations prior, it is as if Chong is attempting to bridge the knowledge gap between the then and the now, by having them speak the words of these playwrights, in relation to their own views. 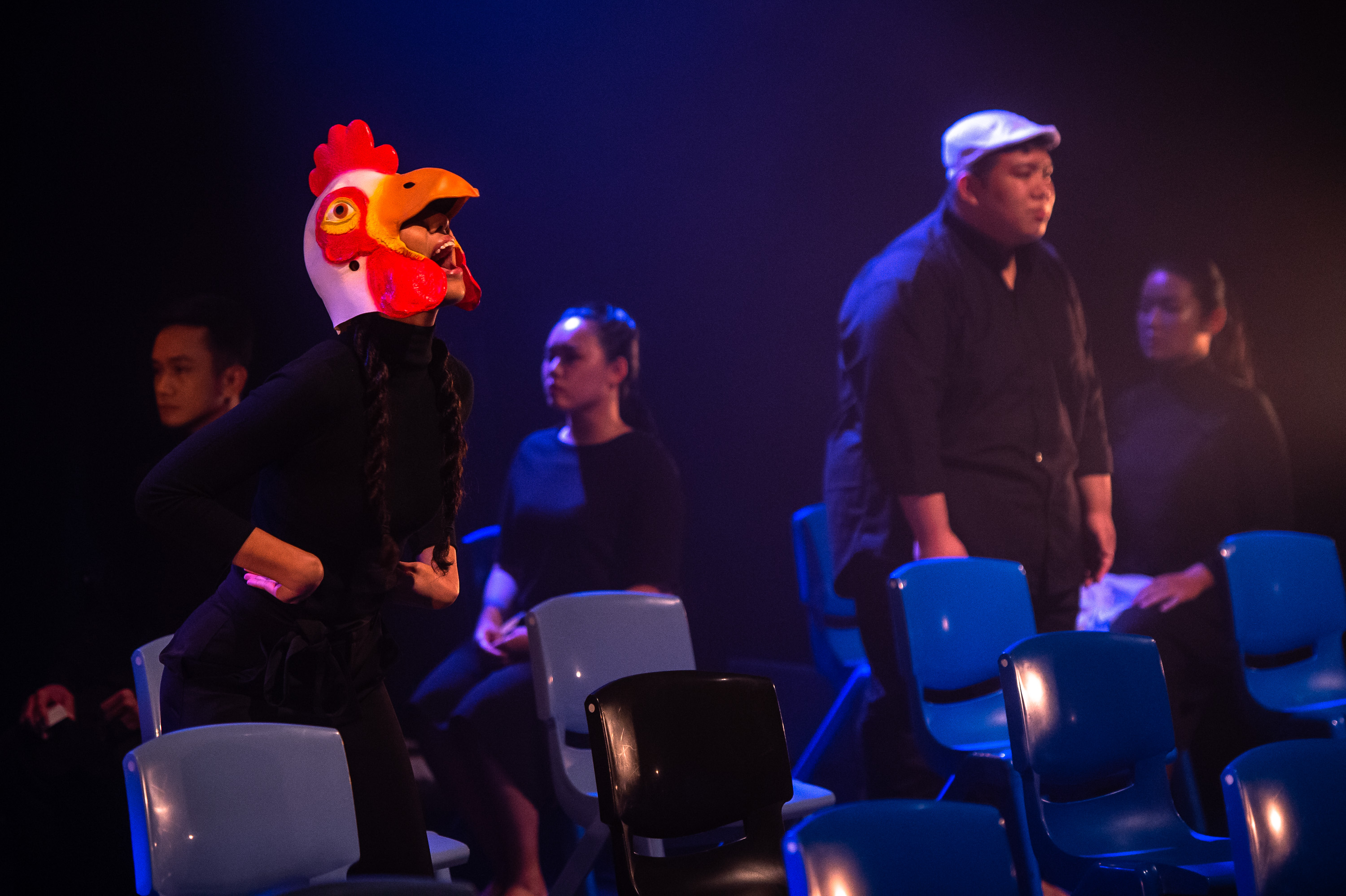 There is an underlying sense of loss that informs the show. Visually, actors layer the stage with a bed of brown leaves, as if referencing the gradual death of the kopitiam and kampong. There is a sense of the past haunting the present, with literal lingering ghosts in Kampong Wa’Hassan, along with multiple actors portraying the same character in one scene in Kopitiam, as if these are whispers by our forefathers. Throughout, various cast members’ handphones ring to interrupt scenes, as if it is the call of technology telling us that the future is constantly, always beckoning, with no time for nostalgia. 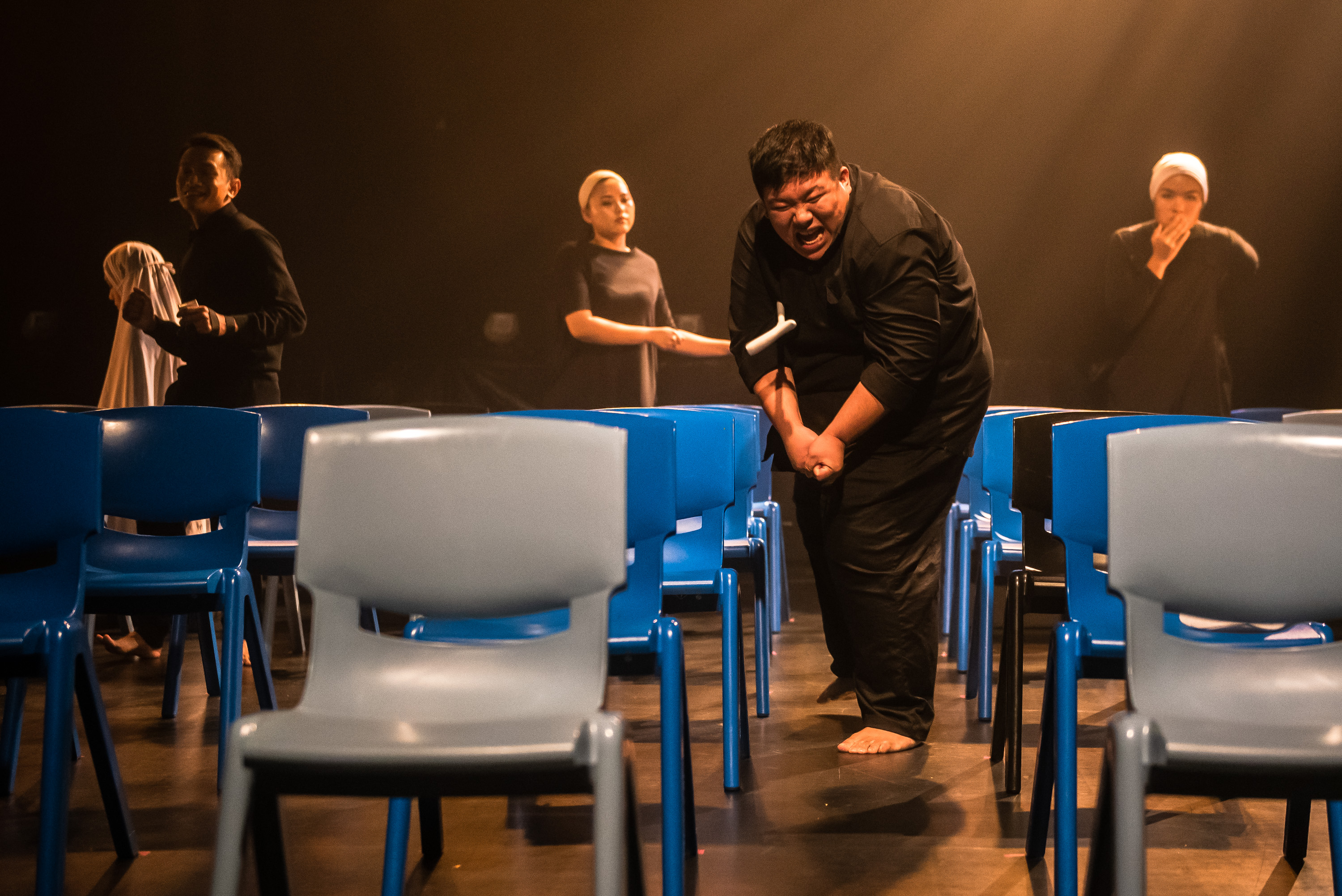 Chong’s direction brings out the best in the ensemble cast of Cally Yeong, Yazid Jalil, Darren Guo, Giannine Tan, Joseph Kong, Nara Nazurah Jumadi, Chen Guochang, Susannah Pang, and Emilbiany. Each time they switch roles with just a simple prop, their physicality, voice and delivery is distinct, and we understand exactly the type of character they’re playing. When they are playing themselves, their frank and sincere responses add a sense of urgency and power to the play, confessional and banter-like. 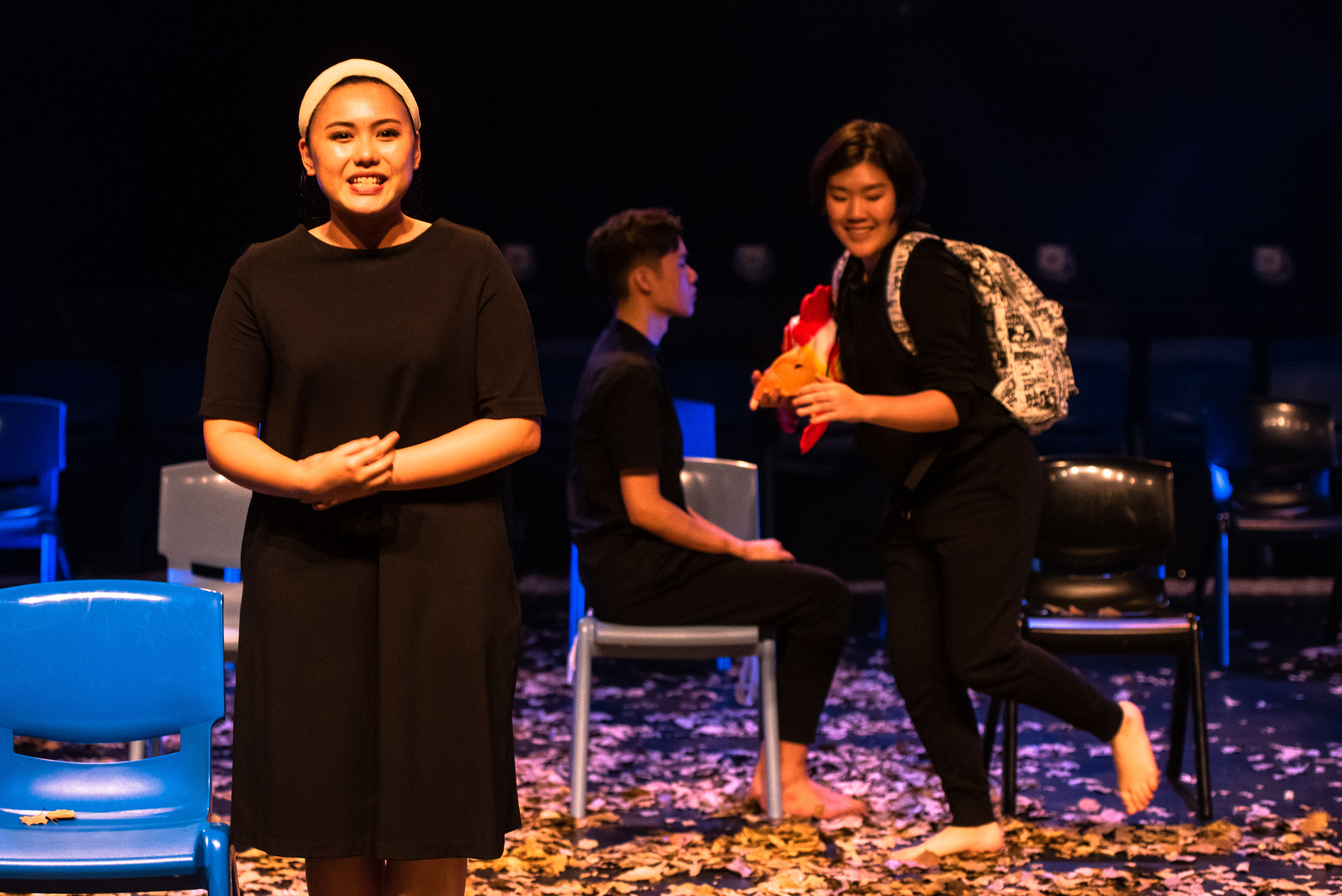 Where Contemplating Kopitiam and Kampong Wa’Hassan feels lacking is the linkage between all three narratives. While certainly not for lack of trying, especially with both Kuo and Alfian’s scripts merging and even interacting at one point, the three pieces are only somewhat linked by their shared themes, and often comes across as three separate shows taking turns to play out. 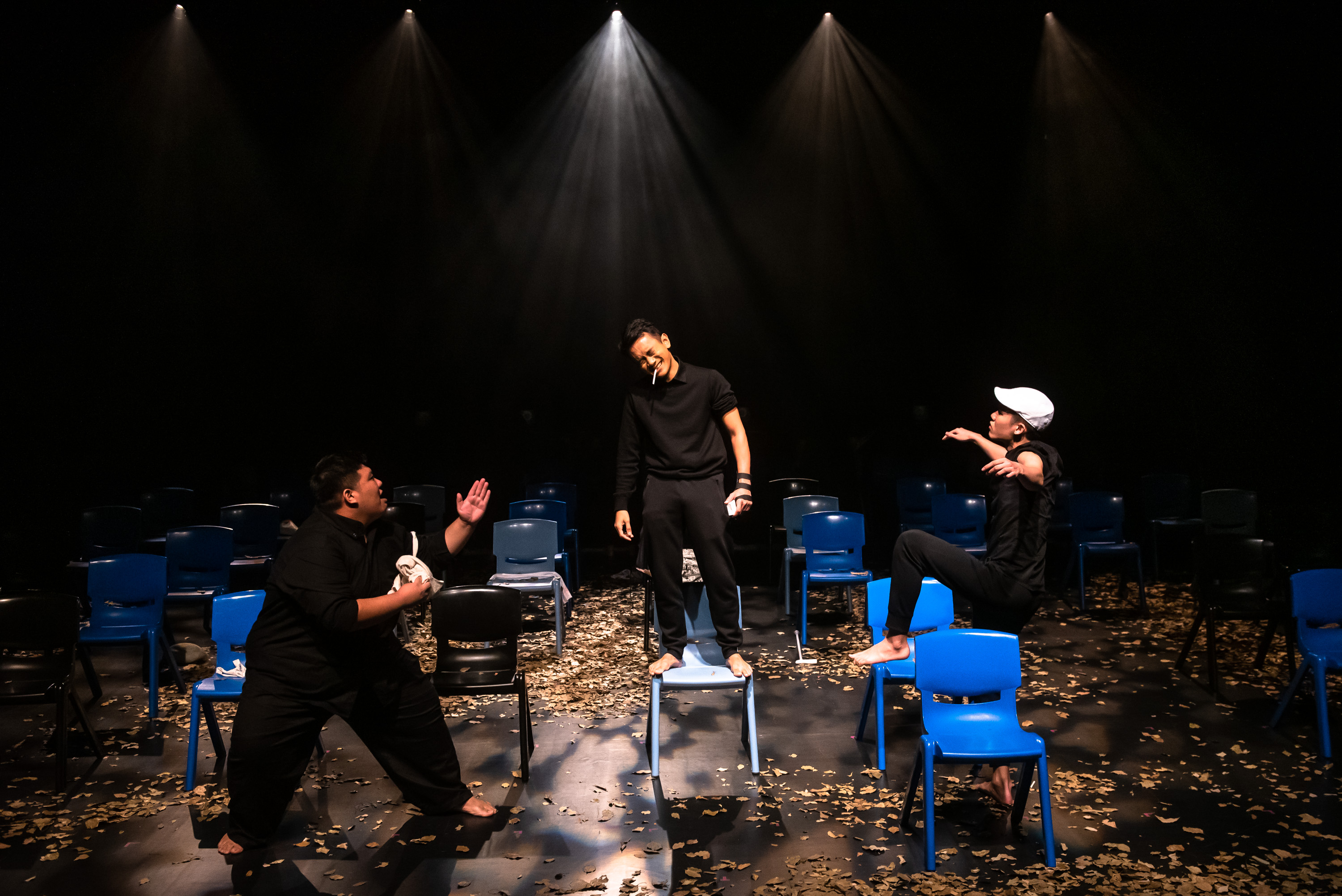 Particularly with how different each form and voice is, the way Contemplating Kopitiam and Kampong Wa’Hassan progresses feels more akin to switching channels on television – each a quality work in its own right, but more a montage than a single cohesive piece. One feels scenes from Kuo’s and Alfian’s scripts need not have been performed in full, and may have better served more as echoes to the verbatim text rather than wresting for attention (Kampong Wa’Hassan in particular, is guilty of dominating the production, with its multitude of characters taking up the most narrative space). 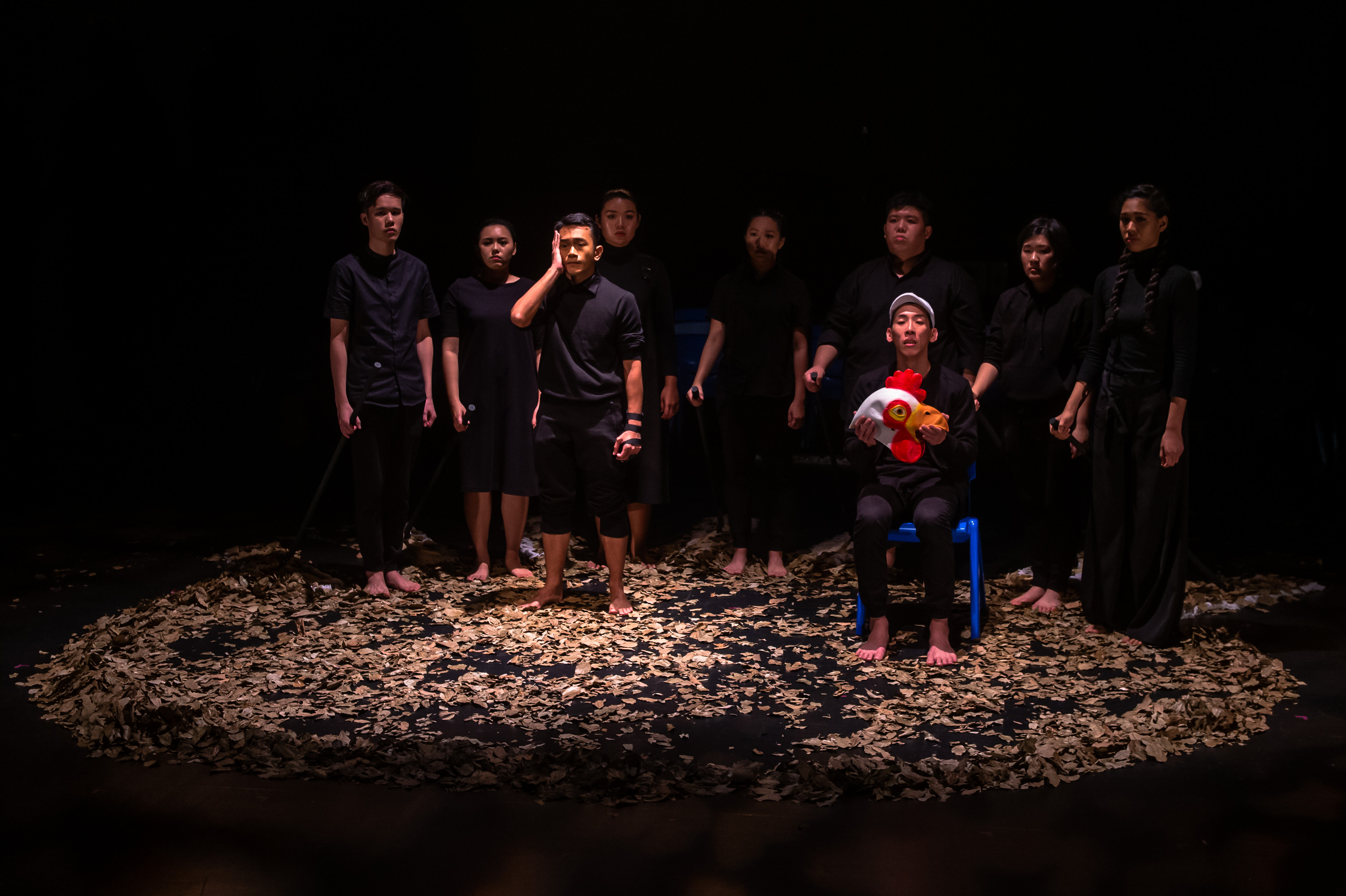 Still, there is plenty of value in what Chong and the team have brought to the stage, and the thematic threads of intergenerational conflict eventually weave themselves together enough to bring across the work’s message. In contemplating both these works and a modern view of the world, we are left with a single moment of peace, all three generations take pause and seem to share a consensus. There is a sad, quiet acceptance that eventually, all must be let go of to pave the way forward, but just for a minute, perhaps we can take time to appreciate what we’ve left behind for it.

Contemplating Kopitiam and Kampong Wa’Hassan runs from 9th to 12th January 2020 at the NAFA Studio Theatre as part of the 2020 M1 Singapore Fringe Festival. Tickets available from SISTIC