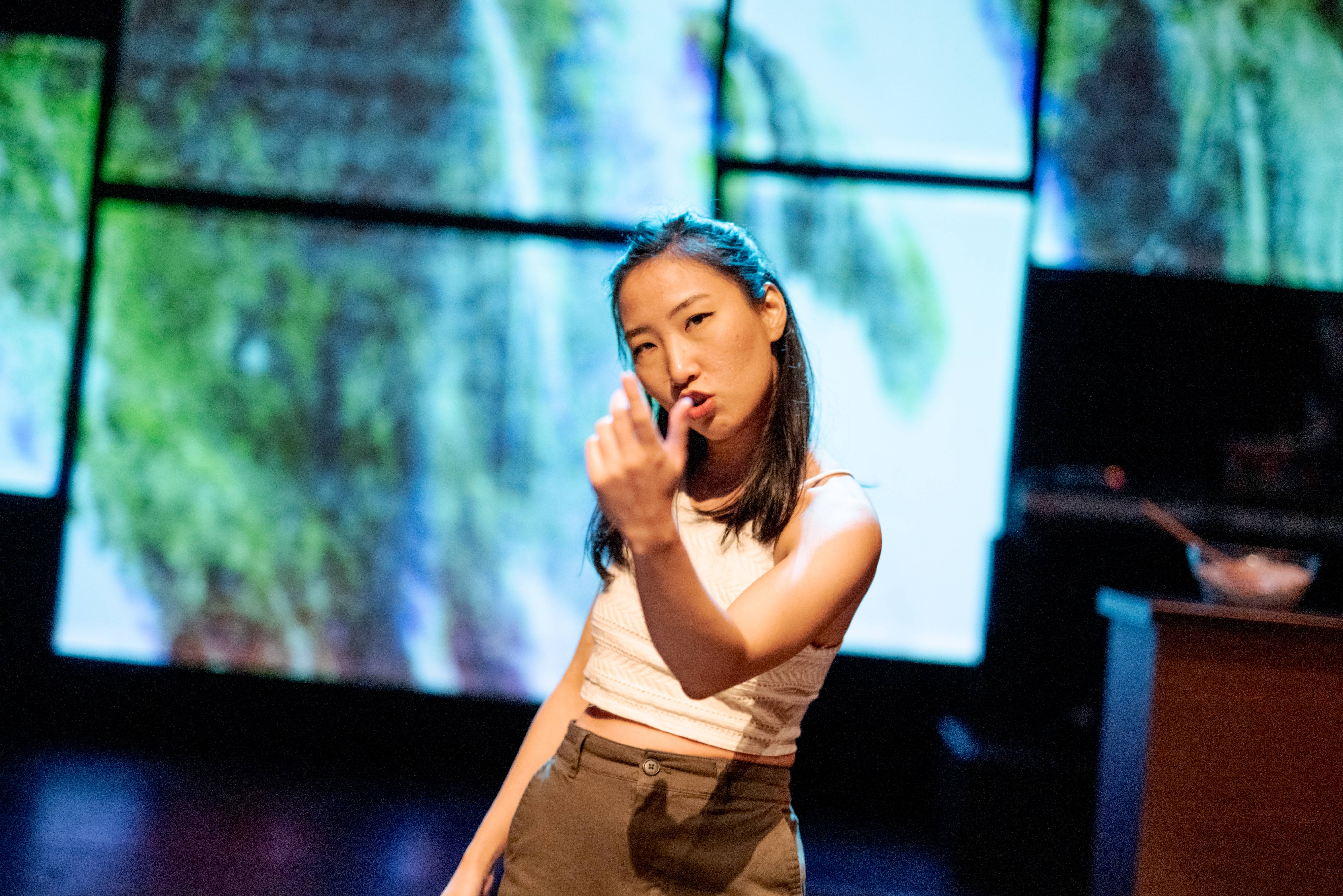 ★★☆☆☆ (Performance attended 10/1/20)
Great songs from .gif stitched together with a premature theatre production unable to fully capture the theme of displacement with its form.

While primarily known as darlings of the local music scene, local electronica duo .gif has also recently dabbled in mediums such as theatre, having provided the lush, trippy soundtrack to Checkpoint Theatre’s Displaced Persons Welcome Dinner (2019). Their iconic sound is singularly theirs, atmospheric and powerful enough to elevate one’s mind, making their voice prime for crafting a unique music-inspired interdisciplinary piece commissioned for the M1 Singapore Fringe Festival.

Directed by Anthea Julia Chua and written by Chew Wei Shan (Weish, one half of .gif), Beside Ourselves features Weish, Sharda Harrison and Isabella Chiam engaging in an increasingly absurd conversation (even making explicit reference to the play Waiting for Godot, the epitome of absurd theatre), casually dropping in mentions of academic theories while corrupting them with dirty wordplay. Along the way, they end up discussing a number of odd topics linked by their relation to the feeling of being displaced or dysphoria, disconnecting the mind from the self. Throughout, they embody various characters from ‘Techno Bengs’, dementia-ridden neneks, misgendered transgenders, and supermarket cashiers asking for PAssion Cards as the performance progresses, all while making Milo and terrible tacos represented by bowls and beakers of marshmallows. 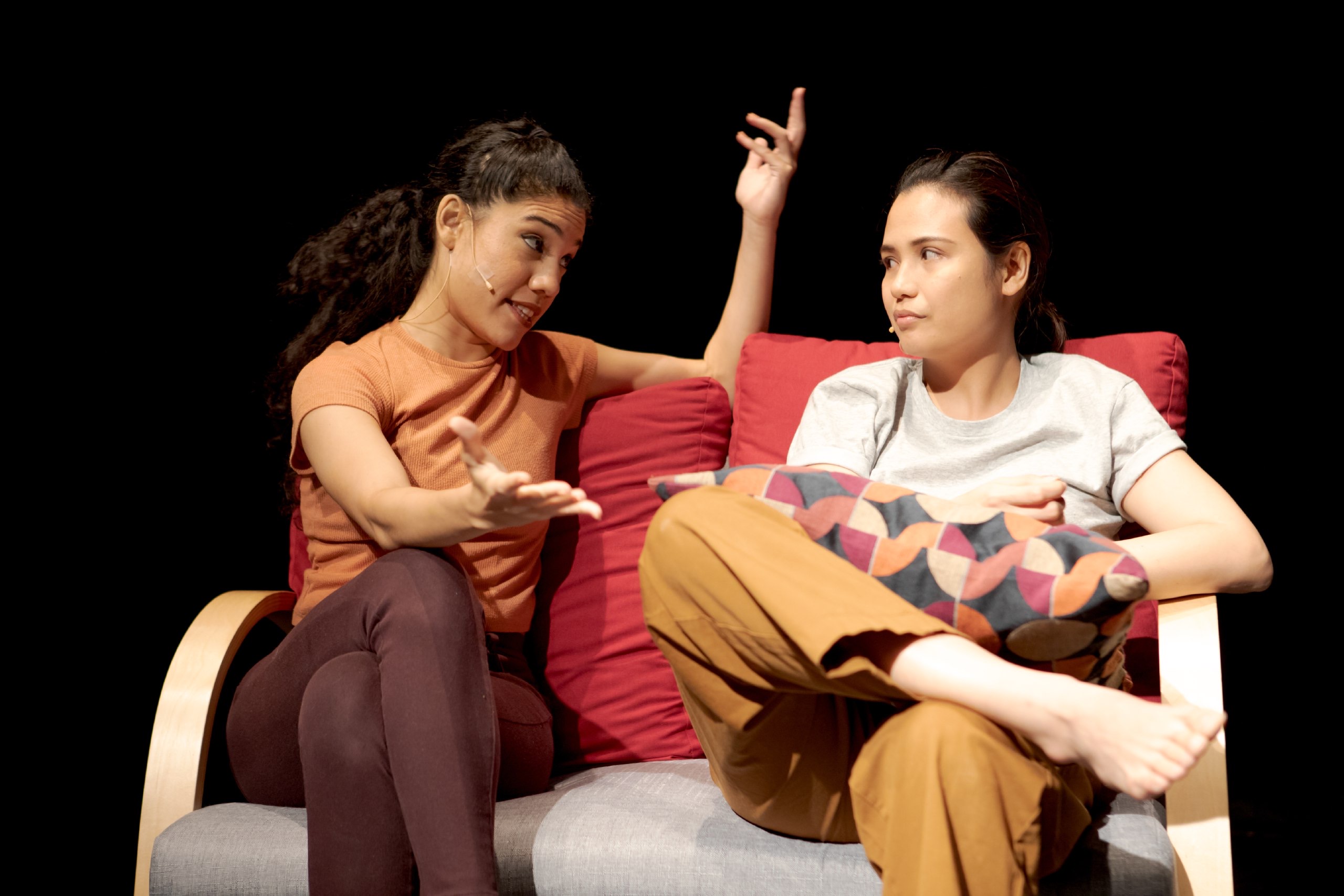 These scenes are accompanied by and interspersed with live music by Nurudin Sadali (Din, the other half of .gif), with all three cast members providing the vocals. Beside Ourselves ends up becoming a contemporary, alt-musical of some sort, with the songs often bearing some relation to the scenes that came before them, be it in mood or theme. The result of this is mixed. On its own, the music is ephemeral, and evocative, with Weish in particular taking centrestage and evidently in her element. With visuals of waterfalls, vortexes and waves (by art director Marc Gabriel Loh) playing on the fractured screens behind, we too feel as if we are carried on the sonic tides of .gif’s sound, on the verge of being lifted from the mundane. 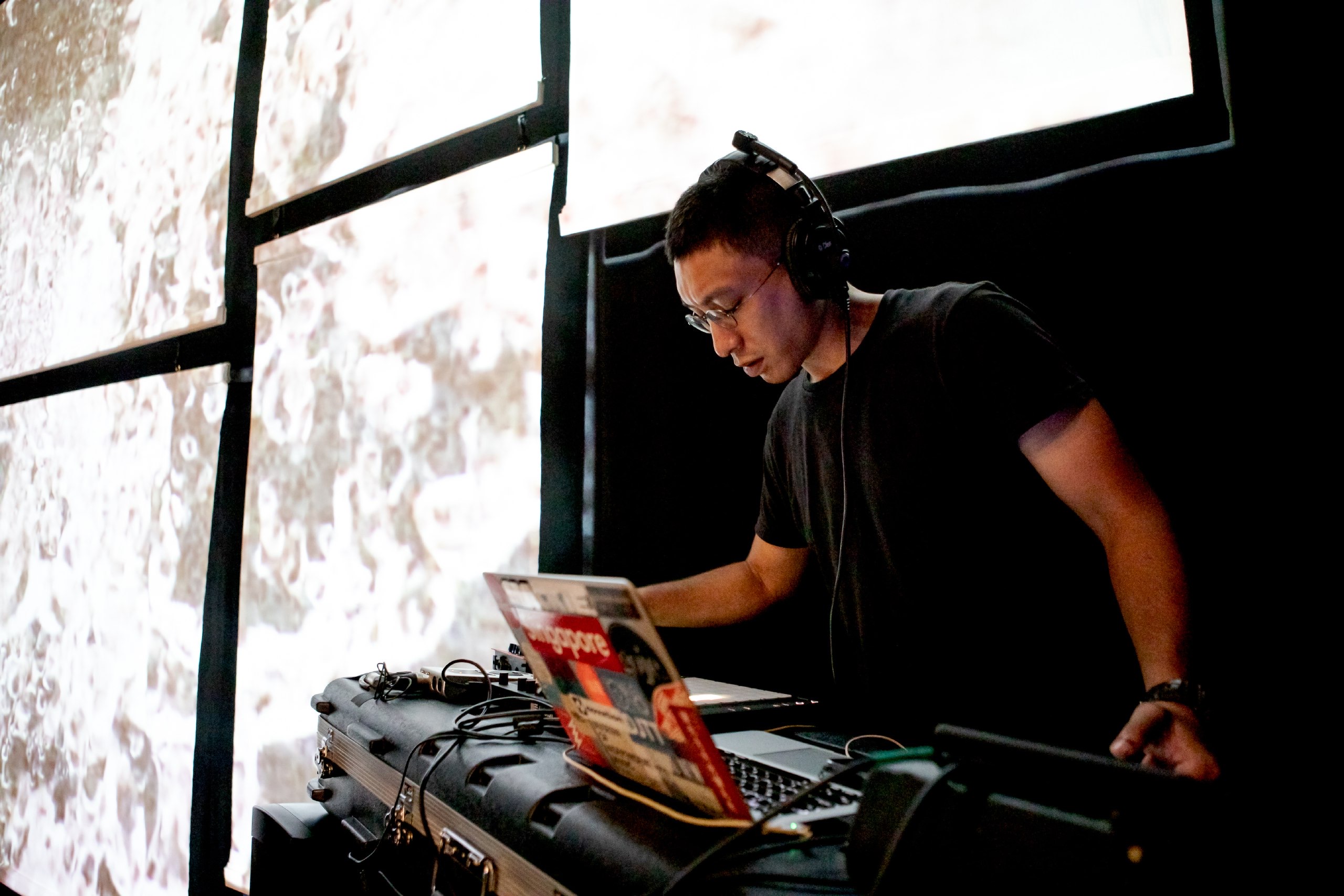 It is a pity then, that the theatrical elements of Beside Ourselves do not match the power of the musical ones, and in fact, almost serve to lessen their effect rather than amplify it. The accounts featured, while certainly useful for providing context and crafting a backstory to have in mind while listening to these beats, feel underdeveloped in their delivery, lacking a cohesiveness that constantly shifts us in and out of the alternate reality they attempt to put us in. 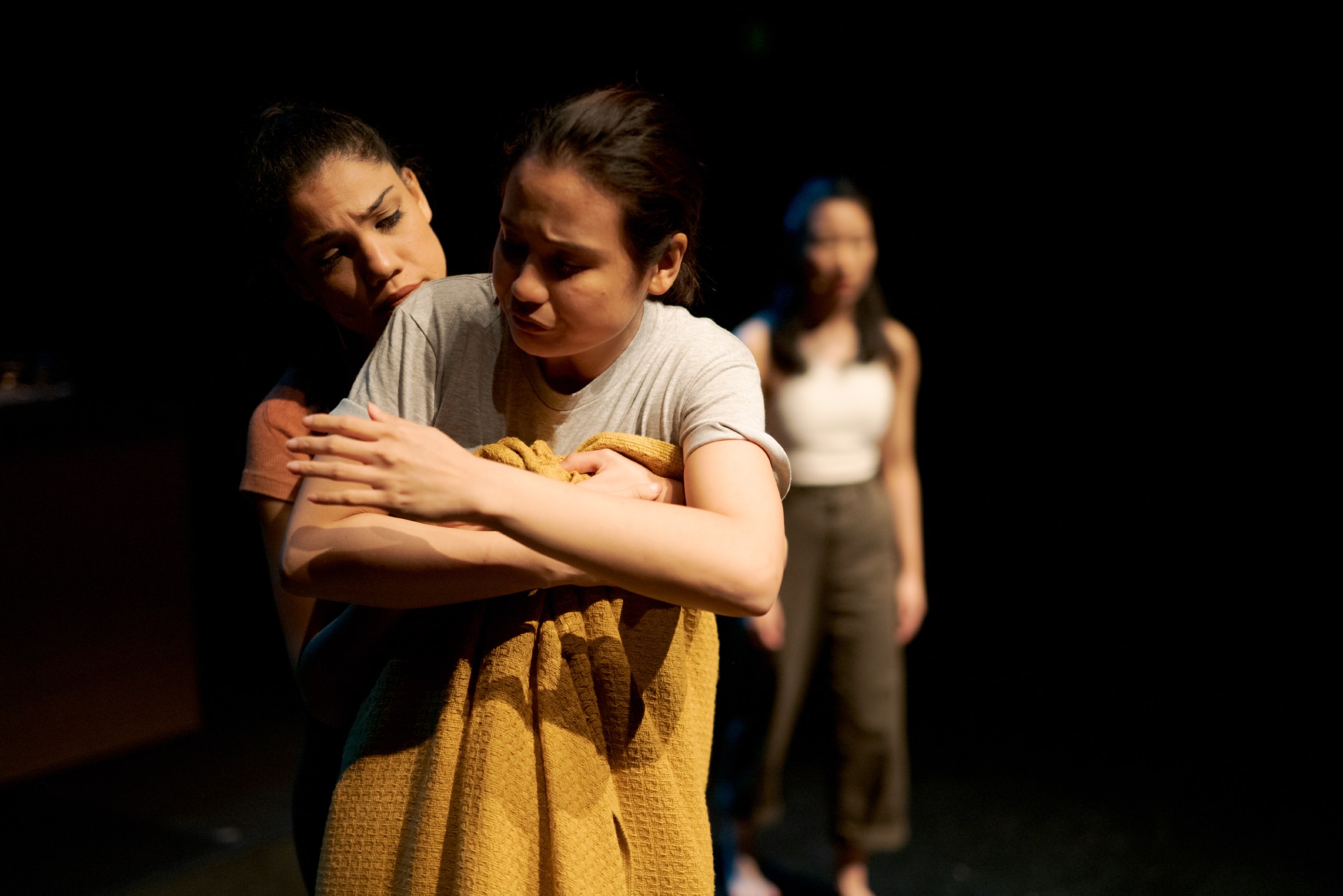 Beside Ourselves always feels on the brink of leaning utterly, completely into the weirdness it sets up, but never fully commits, leaving us still with two feet planted firmly on the ground. There are hints of what it could have been; early on, Isabella Chiam recalls wandering into the ‘wilderness’ of Yishun and encountering an Ah Beng asking if she’d like to see his ‘snake’. While certainly a little disturbing, the punchline is that he possesses a literal python in his bag that slinks its way around her, creating a deliciously dark, weird feeling of truth being stranger than fiction. The remainder of the stories never quite match up to the strength or oddity of this first, and their brevity often lacks enough scaffolding to bring us fully into the atmosphere of each story. 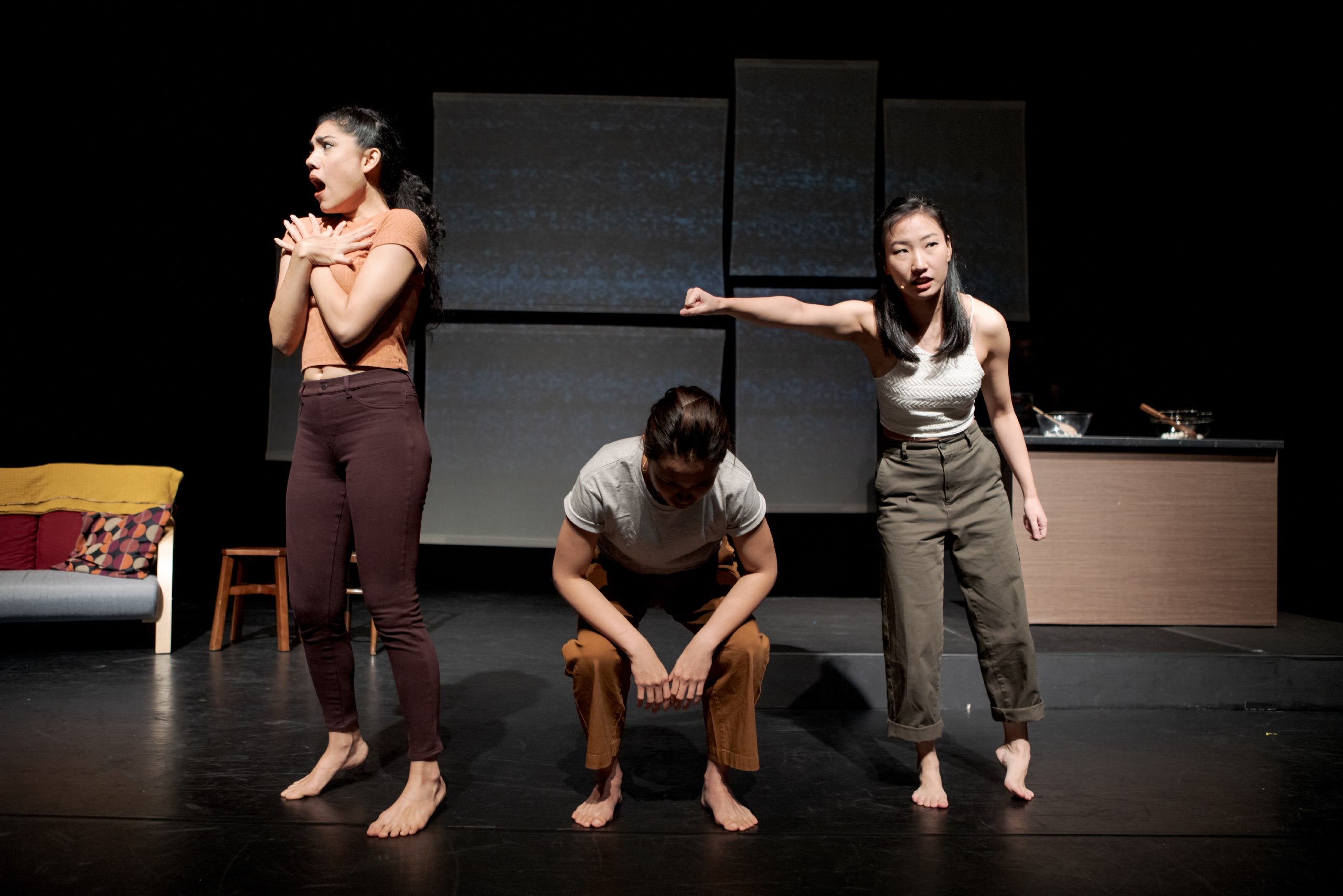 Often, director Anthea Julia Chua is unable to bridge the gap felt between audience and actress when they perform each confessional-like account. The intimacy is key to feeling the trauma experienced by each character, but it feels as if they are speaking into a void and physically distant from us. There is an almost frustrating amount of self-awareness that prevents us from fully immersing our minds into these odd worlds, such as how a transgender man passes commentary on how it is three cisgender women can possibly portray his experience. Weish intentionally calls out for a forgotten line to represent her frazzled state of mind and is criticised by her cast mates for not rehearsing enough. True, the sheer amount of ideas presented is representative of our overactive consciousness and worries, but do not feel as if it builds on itself, existing as a collection of anecdotes but not a cohesive enough one to drive home its message, 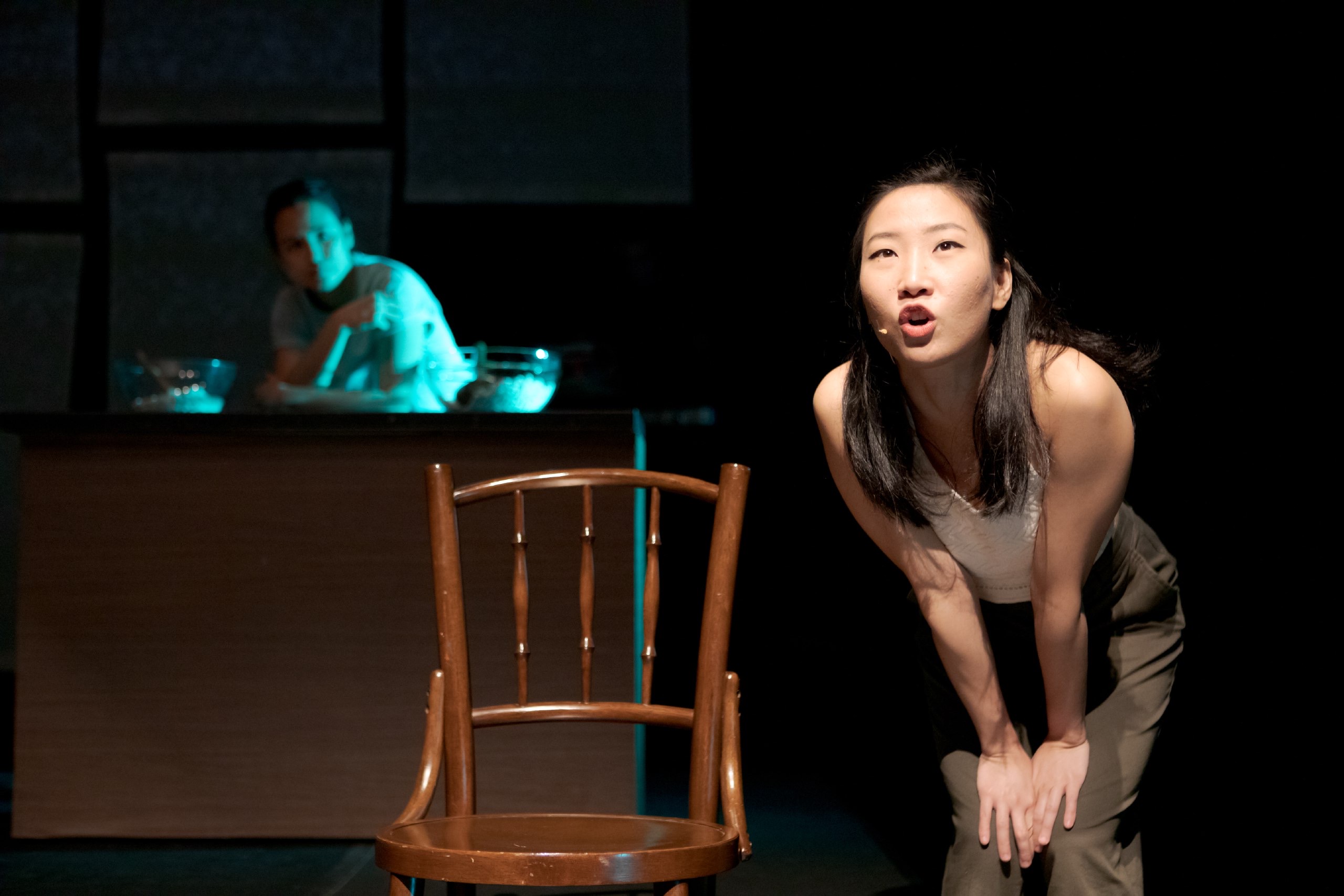 It is eventually revealed that all of this actually takes place inside Weish’s head. As she breaks down (despite her best efforts to calm herself), her friends comforting her and attempting to stem her anxiety, this is by far the realest, most affecting scene in the entire piece. There is value in .gif trying to bring out the absurd nature of our modern life, and attempting to stage these strange experiences too difficult to describe in words. But far too often, Beside Ourselves simply comes across as pedestrian and premature in development, failing to capitalise on the potential of its form and surreal soundscapes to take us on the out-of-body experiences it speaks of, something .gif already does all too well in their music alone.

Beside Ourselves ran from 10th to 11th January 2020 at the Esplanade Recital Studio as part of the 2020 M1 Singapore Fringe Festival.

0 comments on “Review: Beside Ourselves by .gif (M1 Singapore Fringe Festival 2020)”