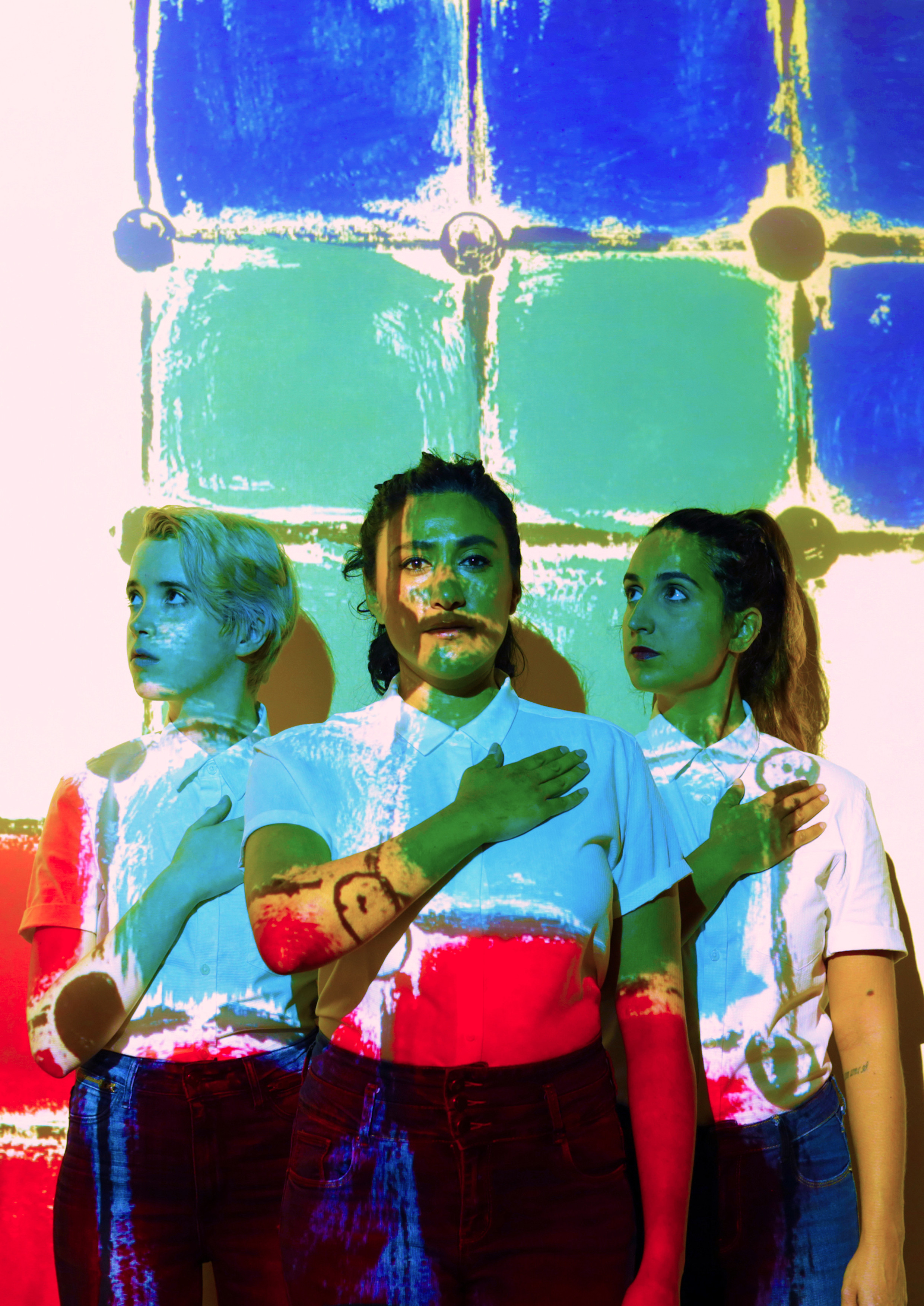 In the not so distant future of 2075, the world is at its end. Three people – a political exile, a former radical and a climate refugee go in search of a virtual utopia, in the hopes that they find some form of shelter away from everything else.

But what results is an absurd game, as Square One Collective’s No Place emerges as a social experiment that begins to chip away at individual identities, in the process, examining the relationships between citizenship, nationhood and personhood and asks what happens to people when they undertake an extreme journey of migration. We spoke to No Place co-creators Andrea Ang and Sarah McEneaney, and discussed a little more about the work’s conceptualisation, and what to expect from the piece. Read the interview in full below: 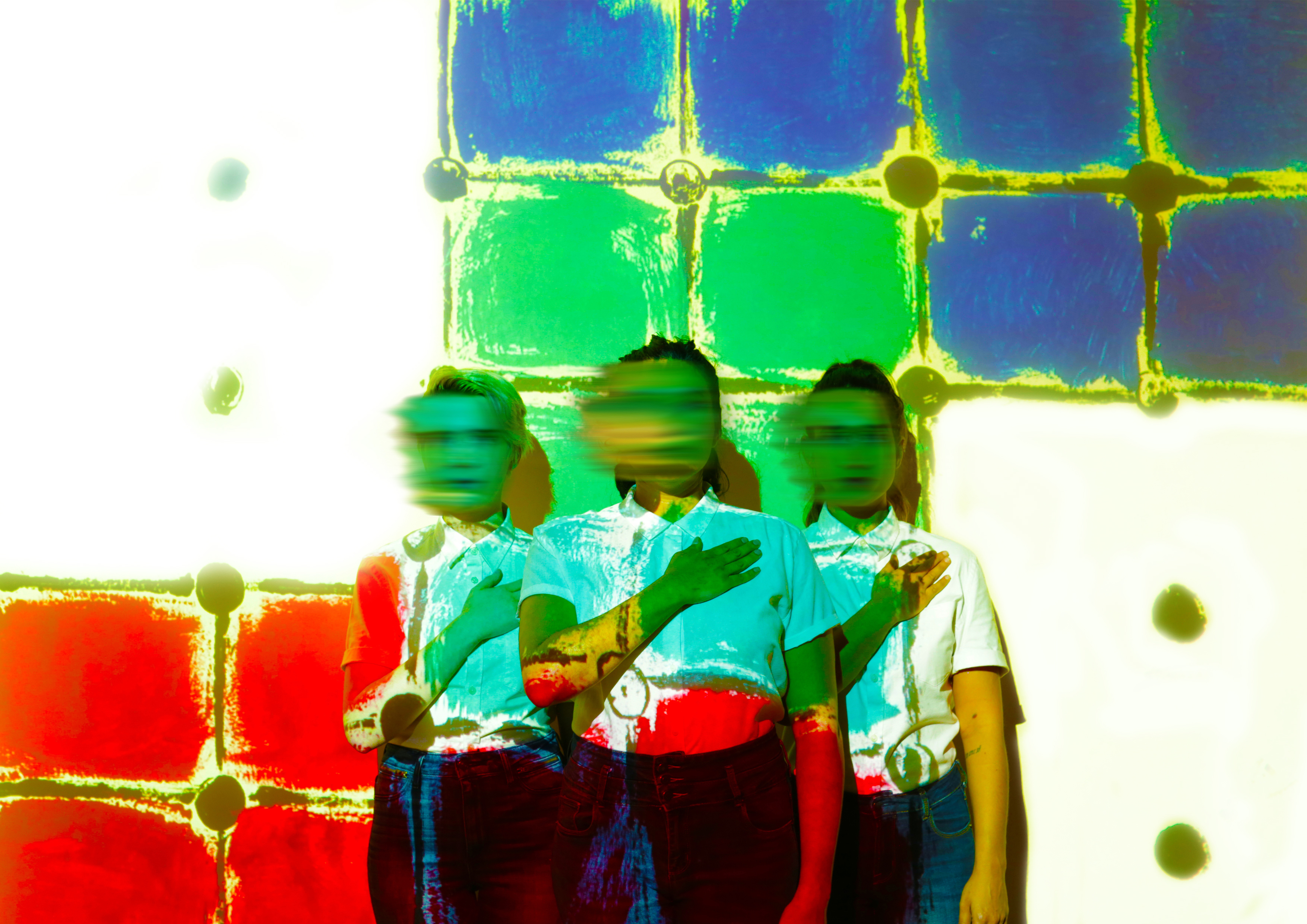 Bakchormeeboy: How did the idea behind this piece develop? Was there any specific reason why the year 2075 was chosen as the setting for No Place?

Andrea: The idea began with an interest in investigating the relationship between national and personal identity and the relevance of the national identity on the individual in today’s day and age, especially with the fluidity of information and travel. It started from a personal place for me as I had just immigrated to New York from Singapore and was trying to navigate what it meant to be an immigrant. At the time when we first started this project (in 2017), Trump had just been elected and there was also Brexit, and those events definitely influenced our conversations. As a group we first began examining our personal relationships with our country, then in our further research began delving into social experiments that countries or corporations had run on people.

We wanted the play to be set in the near future and near enough to make us reflect on and contemplate our present situation, especially because in our beginning phases of research and discussion we felt the ideas we were exploring could very well happen within the next few decades (which is scary). 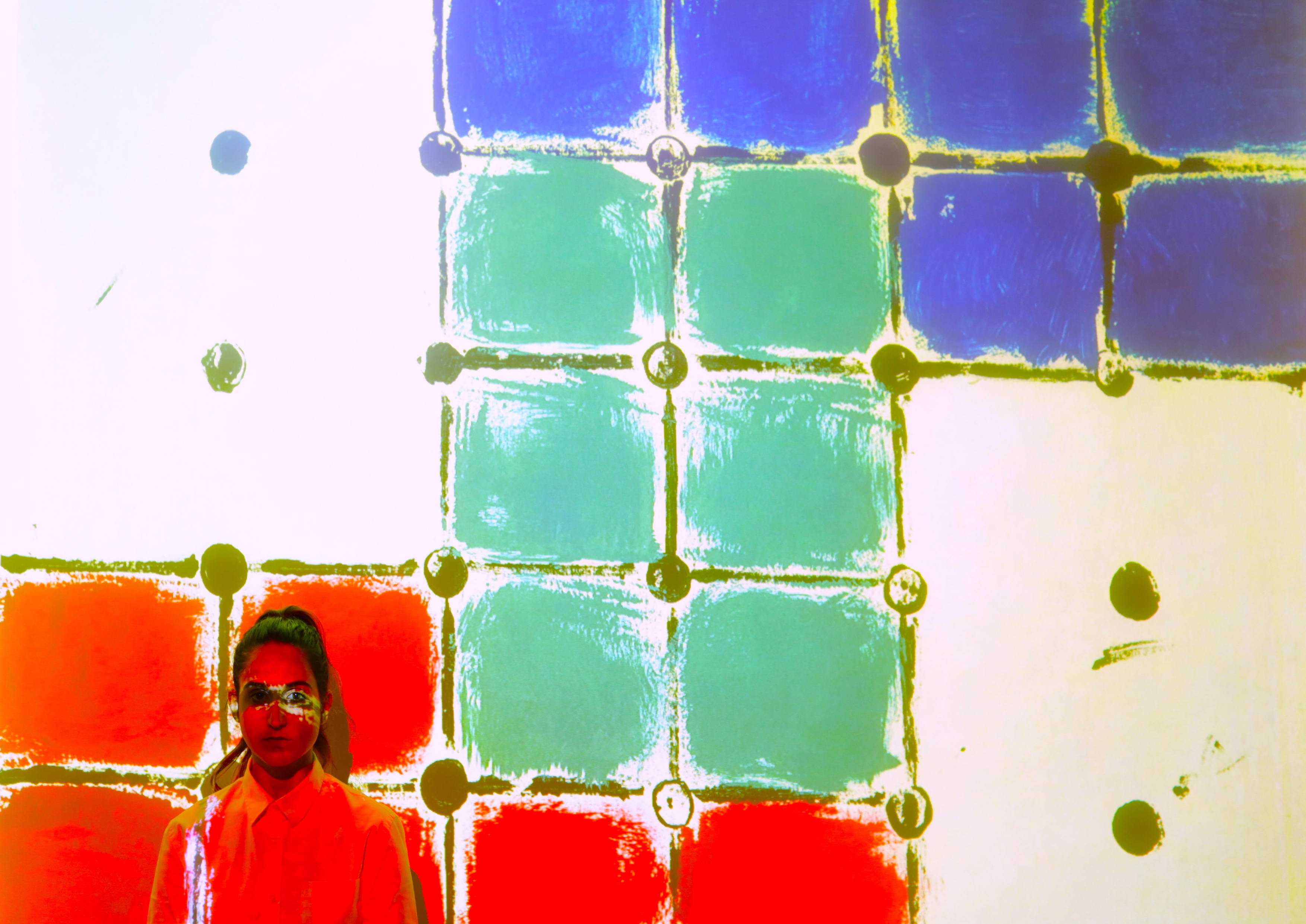 Bakchormeeboy: How was the design for the ‘absurd game’ the characters play conceptualised? What was some of the research or thought process that went into the creation of this piece?

Andrea: The absurd game that characters play is actually not a new one we invented. It’s a dots and boxes game (where players draw lines to form boxes and obtain points) that some might have encountered in their childhood, but we modified it further by expanding the conditions within the game.

We played a ton of board games to analyse how each gameplay would differ from each other and also how we, as players, were interacting with each other. In terms of characters, I was interested in people who were inhabiting a liminal space with regards to their relationship with their home like exiles, refugees, etc. I started to read stories on climate refugees as well as how former extremists became radicalized. Those laid the foundation to the characters and after that as a group, we began to devise and fill in the lives of the characters as well as the world that No Place is set in. 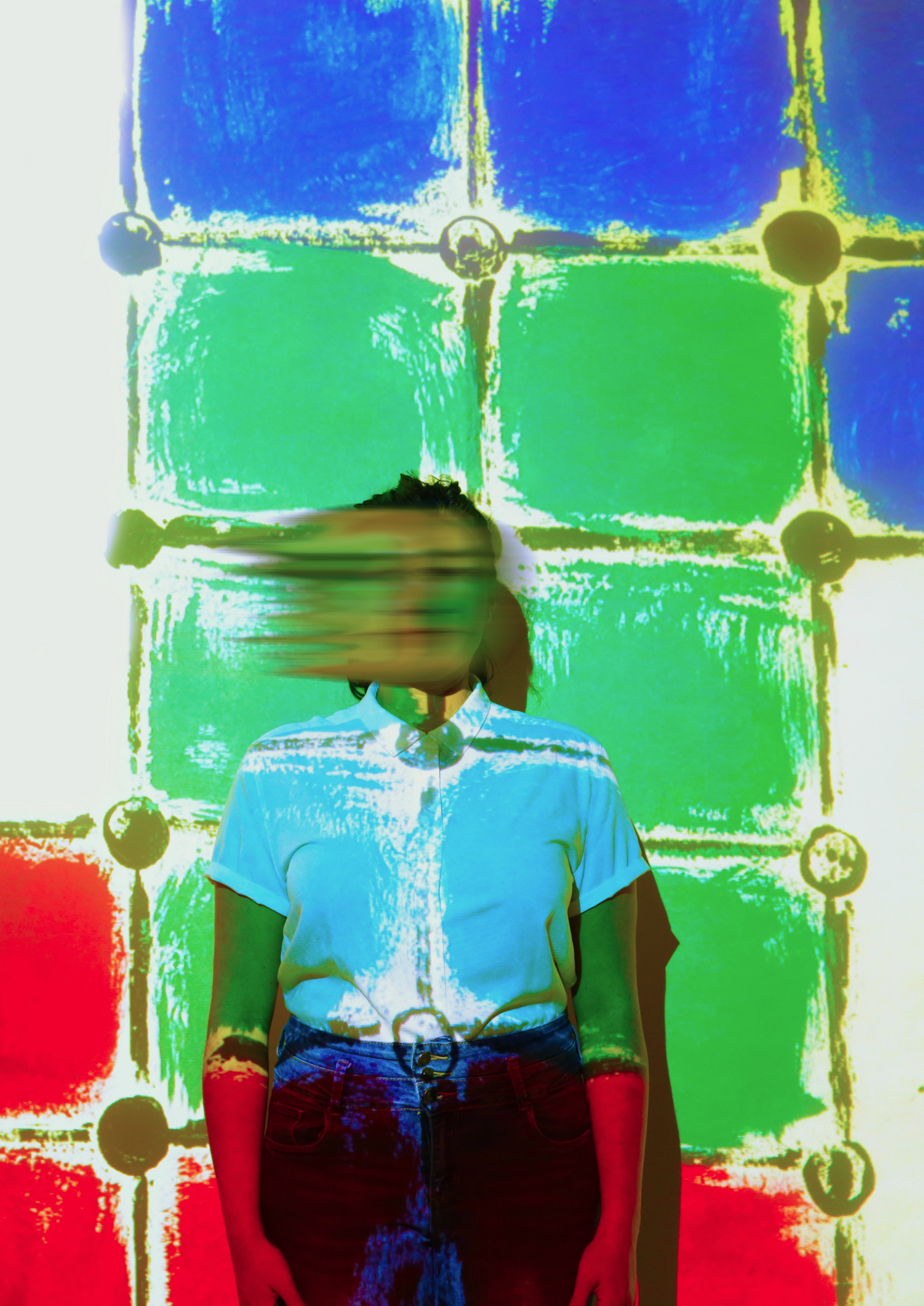 Bakchormeeboy: Though the grass is greener on the other side, no country is without its inherent flaws. What does it take to create a utopian country, and is that the one that is featured in No Place?

Andrea: Ironically, a lot of control- so that’s why I don’t think a utopian country could ever exist- any utopia will wind up being a dystopia. In No Place, the utopian country is alluded to but never really seen. Characters are on the threshold of entering a new world and what they’re really searching for is a place to belong to and to root themselves in. No Place isn’t so much exploring what a utopian country might look like as it is about these characters seeking this ‘better’ place and the personal gains and losses of making that journey.

Bakchormeeboy: Most of your creative team were either not originally from New York, or in fact, not even from America. With the diversity of backgrounds involved, how was this sense of foreignness or distance from home incorporated into the work?

Sarah: When we first began work on No Place everyone involved had recently moved to New York, so we were all united by our distance from home. It also just so happened that nearly everyone else we brought on as the project grew was also not from New York or the US originally. There’s this great essay by Naomi Hattaway called “I am a triangle” which is about how repatriation shapes you as a person, and how moving from one place to another means you’ll never really be from either, which we all related to. That feeling definitely influenced the direction of the work. No Place hinges on 3 characters who feel rootless, and that sense of rootlessness creates a desperation that influences their relationships and actions within the game. Theirs is obviously an extreme case, but a sense of foreignness is something we all brought to the table when making the piece and it does impact how we move through the world.

Andrea: To add on to what Sarah said, I remember before we even dug deeper into these characters, a lot of time was spent sharing with each other our personal experiences and stories of being away from home during the devising stages. While our journeys are very different from the characters of the play, they certainly shaped the way we approached the work. 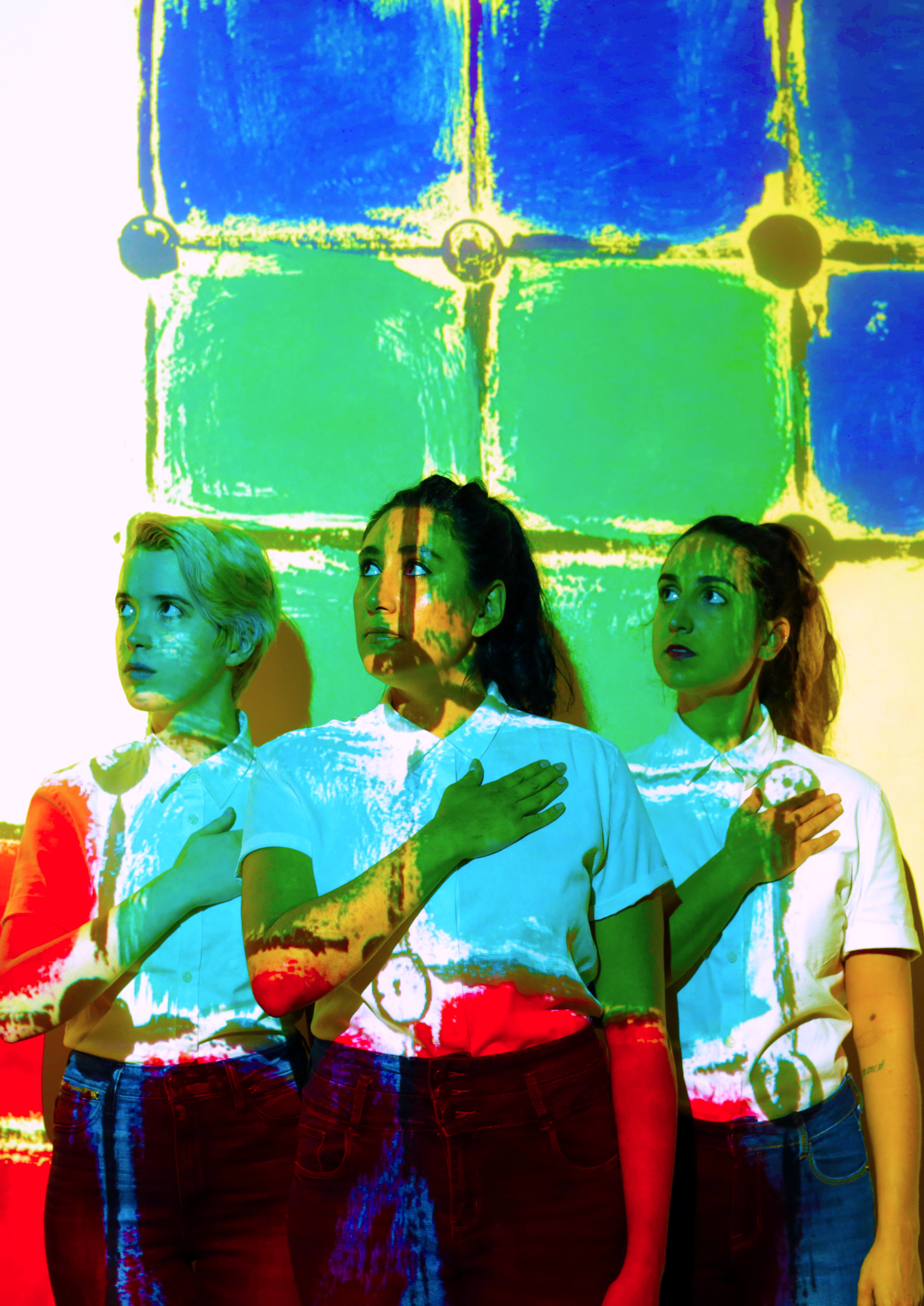 Bakchormeeboy: The three characters featured – a political exile, a former radical and a climate refugee, exist on extreme ends of the spectrum when it comes to not having a place to call home. Should all nations be open to accepting any and all refugees seeking asylum, or are countries justified in strengthening border controls, particularly when dealing with their own stresses and home affairs issues?

Sarah: I think all nations should be open to accepting all refugees. I think it’s a very slippery slope once you start denying certain groups of people citizenship, that’s a gateway to making the doorway smaller and smaller, until only the utmost “ideal” person can fit through. No one chooses to be a refugee, the circumstances that make a person leave their home are more dire than most of us can imagine, so denying them a safe place to call home is especially cruel.

There is the argument that countries need to focus on domestic affairs before dealing with immigrants and refugees, but there is time and space to handle both. I find in the US many of the politicians who call for denying entrance to refugees in favour of helping those who already live here are also the first to cut aid to social programs that help US citizens. So I think that argument is a bit of a straw man. We don’t live in a bubble, we never have, but we certainly don’t now. Turning a blind eye to those in need shouldn’t be an option. In the coming years the number of people needing to relocate is only going to grow, so we need to be coming up with solutions.

Bakchormeeboy: While there is a mix of race and nationalities in your creative team makeup, it so happens that every single member is also female. Was this a conscious decision on your part, and if so, how does that also inform the work and affect the message put across?

Sarah: Having our entire team be comprised of women wasn’t our original intent- the first iteration of No Place was actually created with our company member Akhshay Gandhi, but when he moved back home to India we were left with an all-female team. Andrea and I did decide fairly early on that all the actors should be women. It was important to us that the only people we see in this future world are women, not because it’s an amazing matriarchal society (it’s not), but because we’re women, and we want to tell stories that reflect our own experiences and focus on complex, driven women. Personally, I do believe the future is female, so that’s not not a part of it!

Bakchormeeboy: How do you hope audience members shift their train of thought, or realign their perspectives after seeing No Place?

Sarah: I hope our audience comes away with a new perspective on how displacement can really affect a human being. We spend a lot of time thinking about refugees as a concept but I don’t think we truly process what losing a home can do to a person, and how the need to survive outweighs everything else, even personal relationships.

Andrea: I hope that audiences get curious about systems of immigration within their country and that they would also be able to see the immigrant/refugee as an individual and grow a deeper empathy for the journey they have undertaken to be where they are. 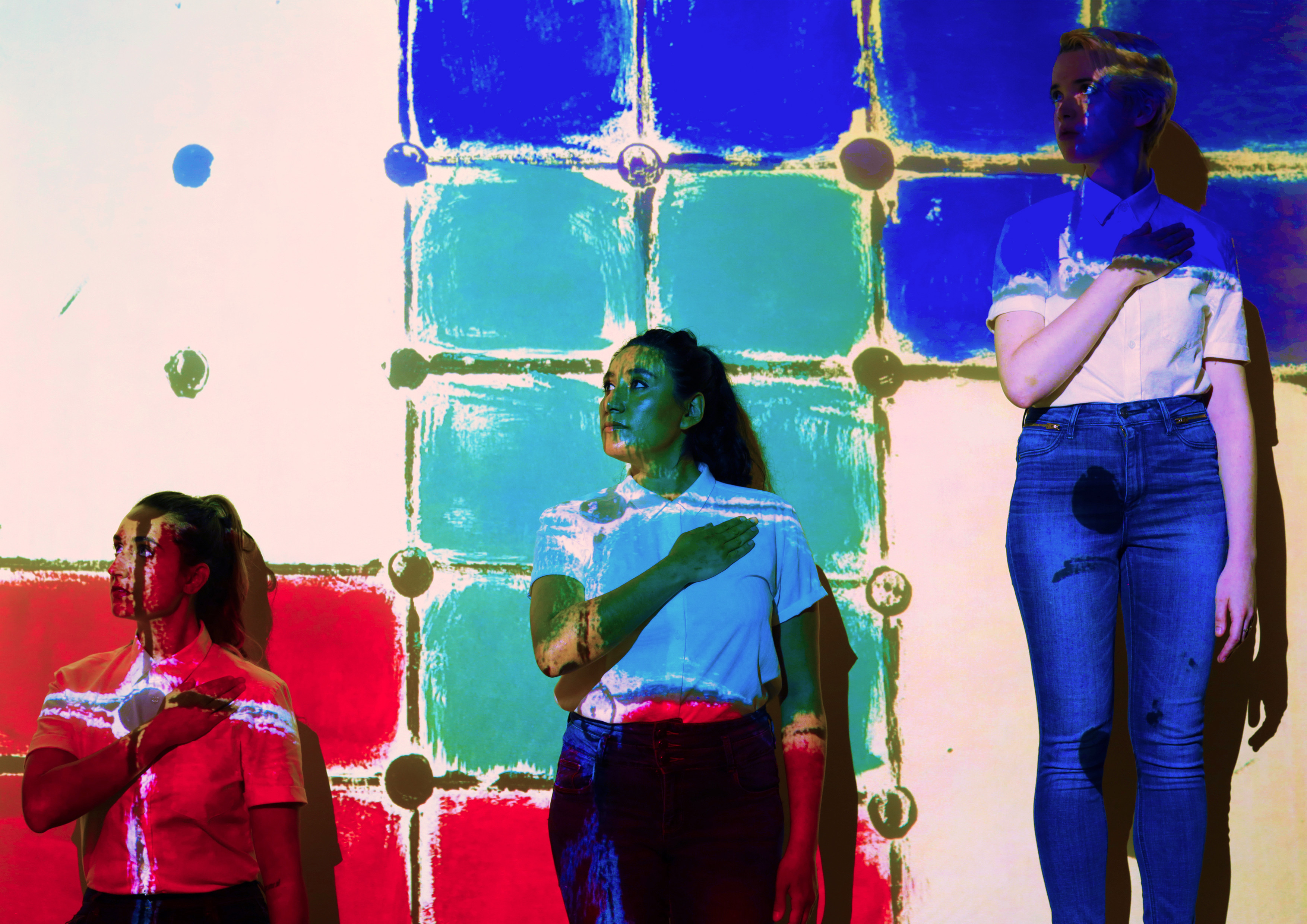 No Place runs from 15th to 18th January 2020 at the Centre 42 Black Box as part of the 2020 M1 Singapore Fringe Festival. Tickets available from SISTIC

0 comments on “M1 Singapore Fringe Festival 2020: An Interview with Square One Collective (No Place)”