Thanks to the film adaptations of Marvel’s Thor and Netflix’s Vikings, Norse mythology is no longer as foreign to Singaporeans as it once was, and gods from the one-eyed Odin to the trickster Loki can be recognised once introduced. But local immersive theatre company Andsoforth doesn’t just want that knowledge to stop there – they want to take it a step further by having audiences meet all these gods and more in person, with their latest immersive dining experience Valhalla and the Chambers of Asgard.

Once again taking on their popular multi-room format, Valhalla and the Chambers of Asgard imagines audience members as valiant vikings and shield maidens en route to a glorious, paradisaical afterlife in the form of Valhalla. But to get there, they’ll have to prove their worth first, as they make their way through various rooms, complete a series of tasks and challenges, and even decide which god they’ll ultimately follow as with the threat of a fiery apocalypse (Ragnarok). 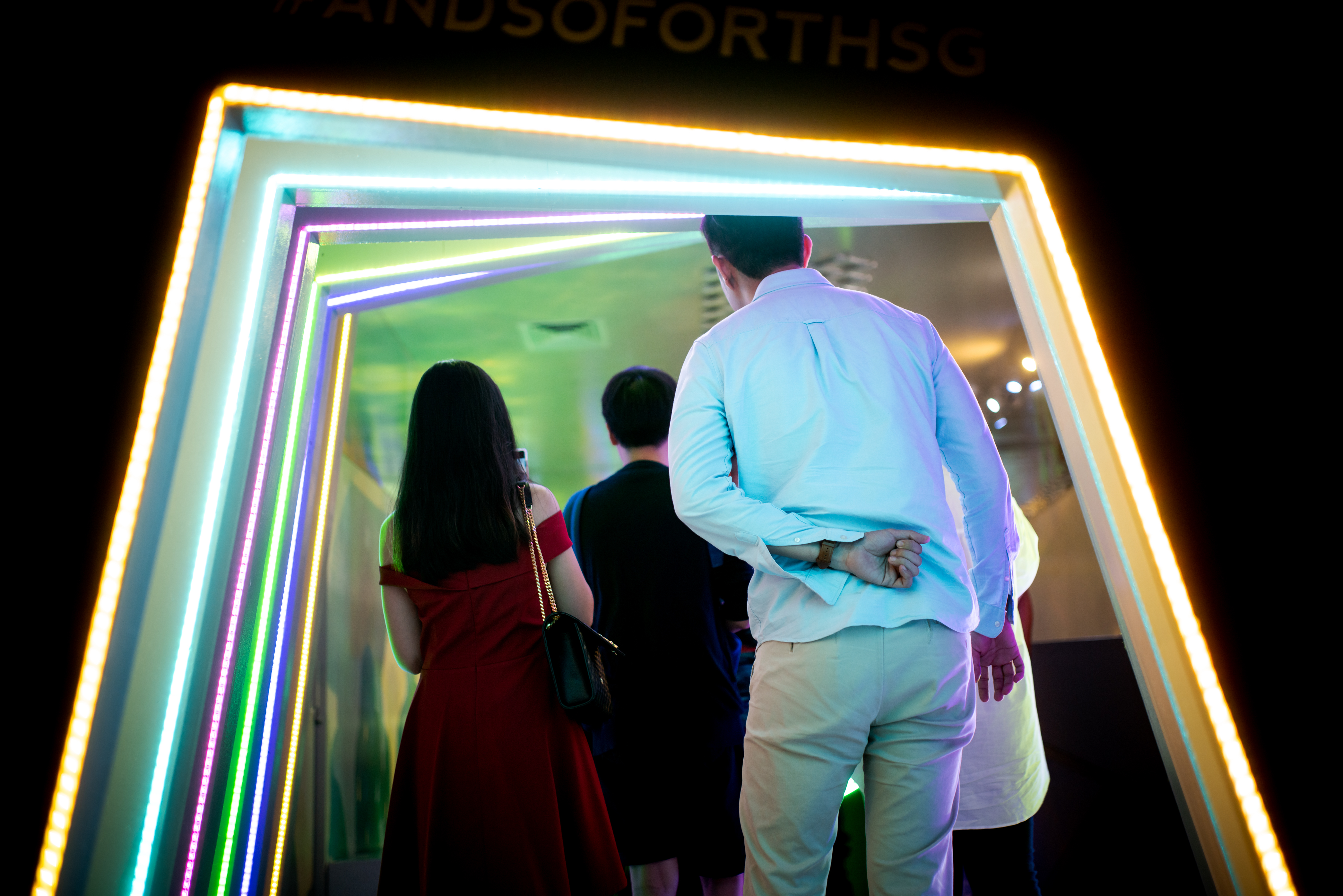 If there’s one thing to be said about Valhalla, it’s that this has to be one of Andsoforth’s most ambitious projects. With a total of seven rooms (designed by Petrina Dawn Tan, Lloyd Chia and Abigail Goh), each one designed to be completely unique, there has evidently been plenty of effort this time around going into planning the atmosphere each chamber provides. The unassuming secret location feels like the perfect place to insert a viking hideout where they might gather to drink, and right from the beginning, audience members start their journey by meeting the valkyrie Göndul (Azura Farid), as she signs each audience member in and ensures their dietary preferences are noted with a Valknut stamp. 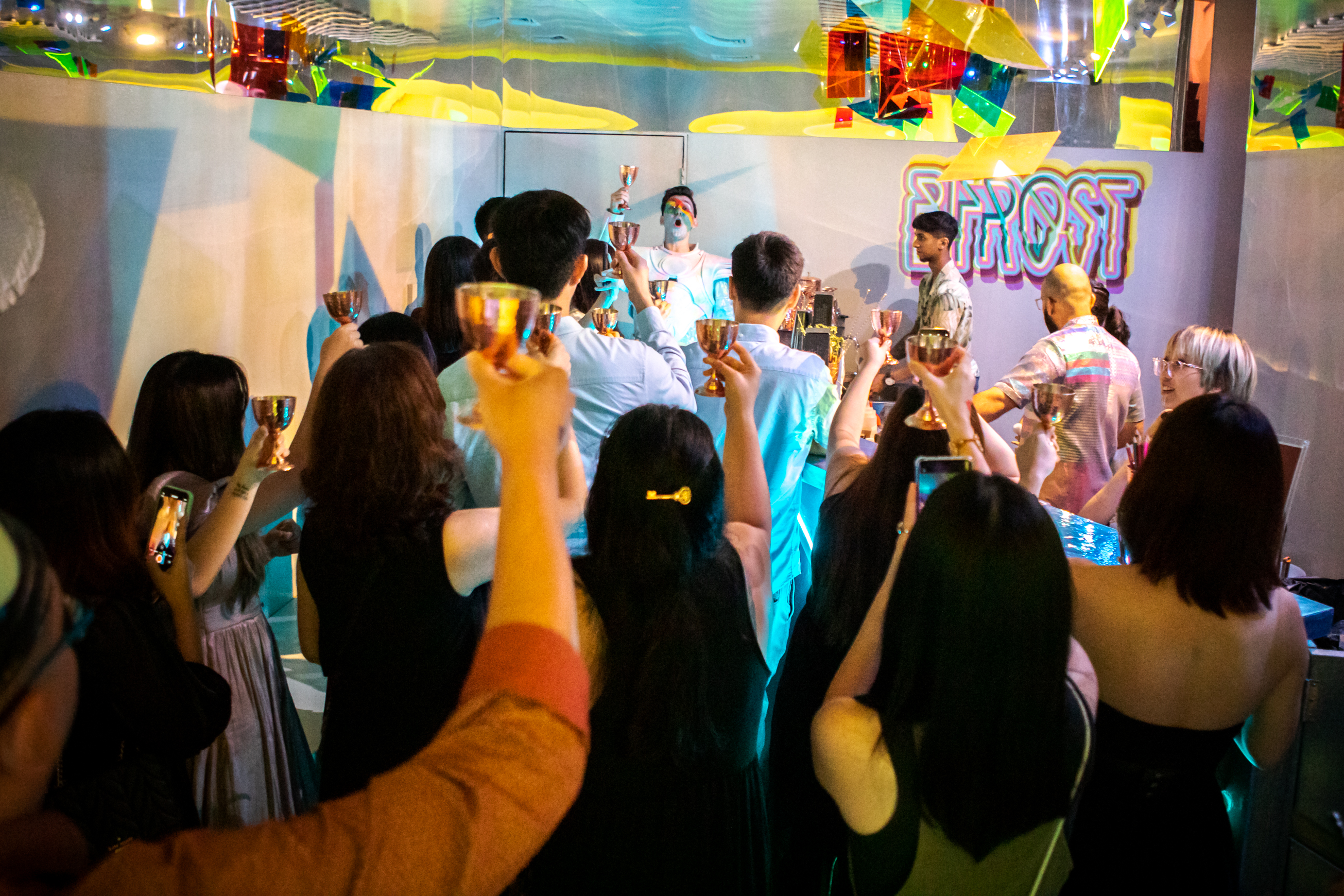 As we enter the space, there is the sense that we’re transported to a completely different world thanks to the portal-like Bifröst (the rainbow bridge of Norse lore), which leads us to the icy-looking bar in the first room. We’re then invited to peruse the drinks menu and arm ourselves with cocktails to last the night. Gifted with a strong welcome shot of mead (mixed with Highland Park Whiskey) to get as warm and ready for the journey that lies ahead, Valhalla then gets audience members off to a strong start with Norse watchman Heimdall (Jad Hidhir) breaking the ice with a series of initiation rites to let the group familiarise ourselves with each other. 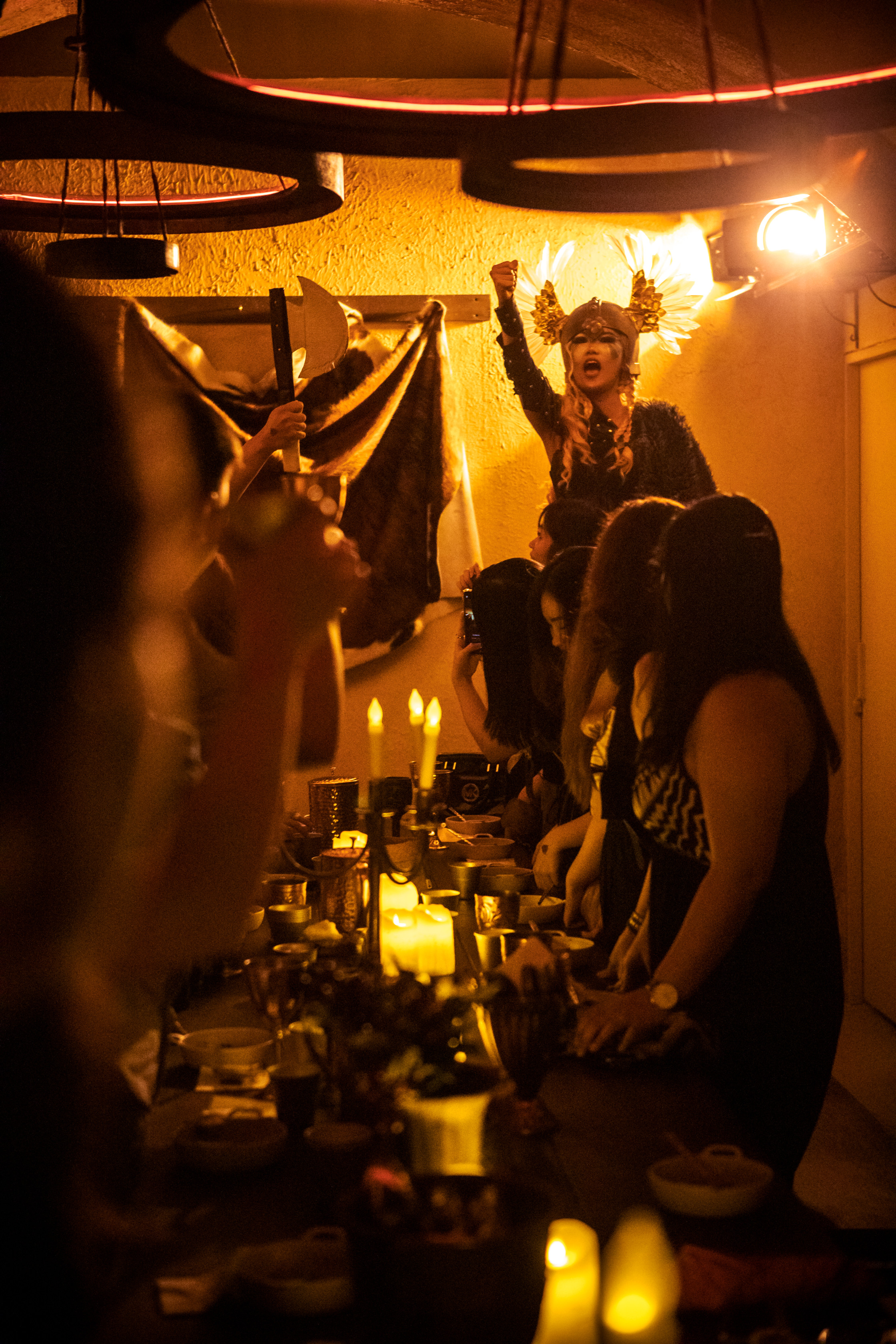 As we progress through the rooms, there is the sense that we’re building up towards something great. Introduced to the fearsome sorceress Grimhildr (Andrea Joy Alingalan), we were taught some useful Nordic phrases and the Valhalla anthem in the Tavern (while feasting on lamb stew), and got to know each other better in the intimate space. Warned of the coming end times, we were now closer than ever as a group, and forged ahead together to the cabin-like Medicine Room. 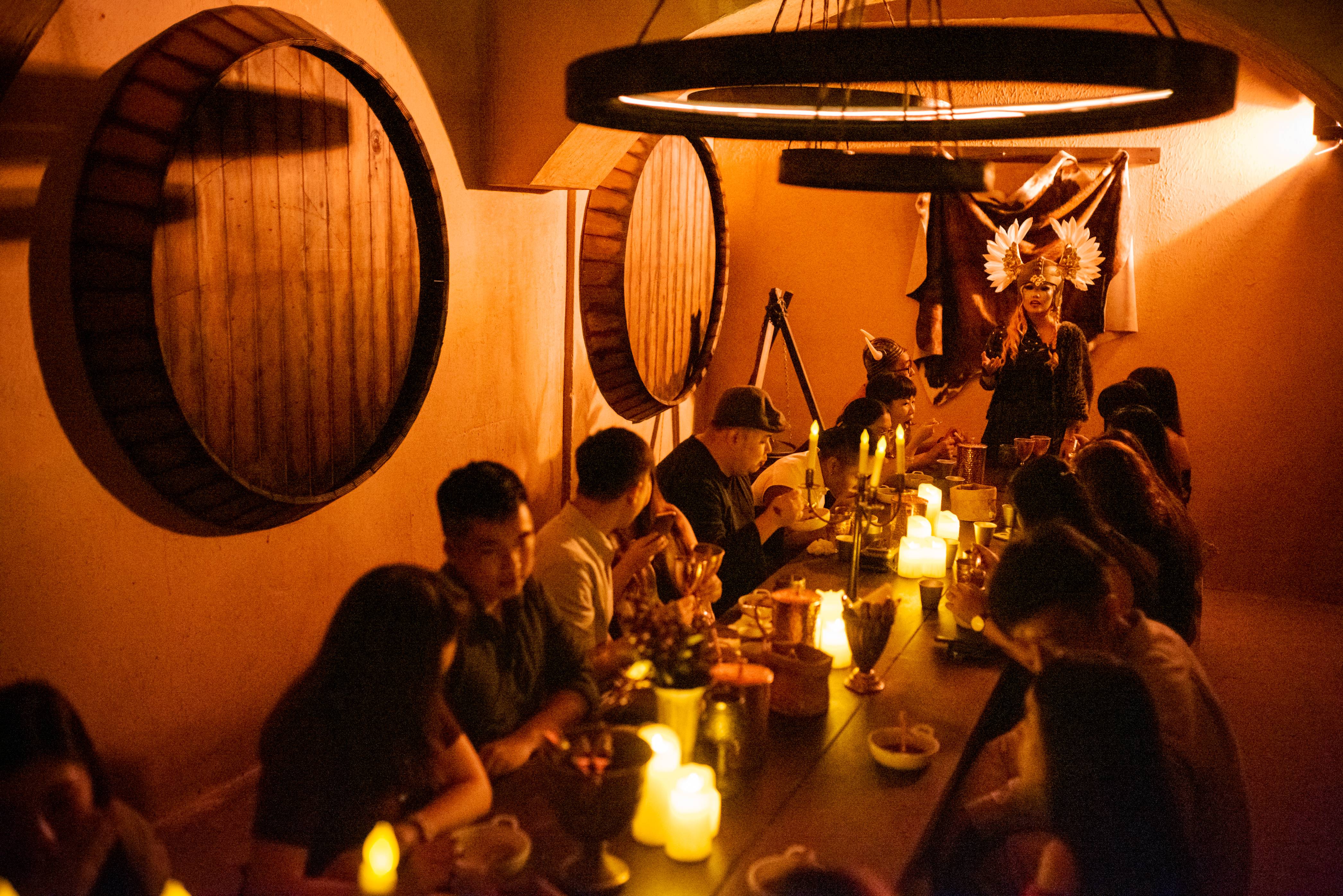 Here, Stacey Riley, as the vivacious valkyrie of mercy Eir, is the highlight of the night, as she embodies free love, recreational medication, and shows off strong improv skills reacting to and poking fun at the audience as they go about preparing a powerful sleeping draught. As we gather ingredients from around the room and grind it up, there’s plenty of great back-and-forth banter between the audience and Eir, making this one of the most fun rooms of the evening. Chef Jason Ang’s ‘fruit of Yggdrasil’ (fried salmon with tartar sauce) is also a delight here, despite what its charred, ‘turd-like’ appearance might otherwise suggest. 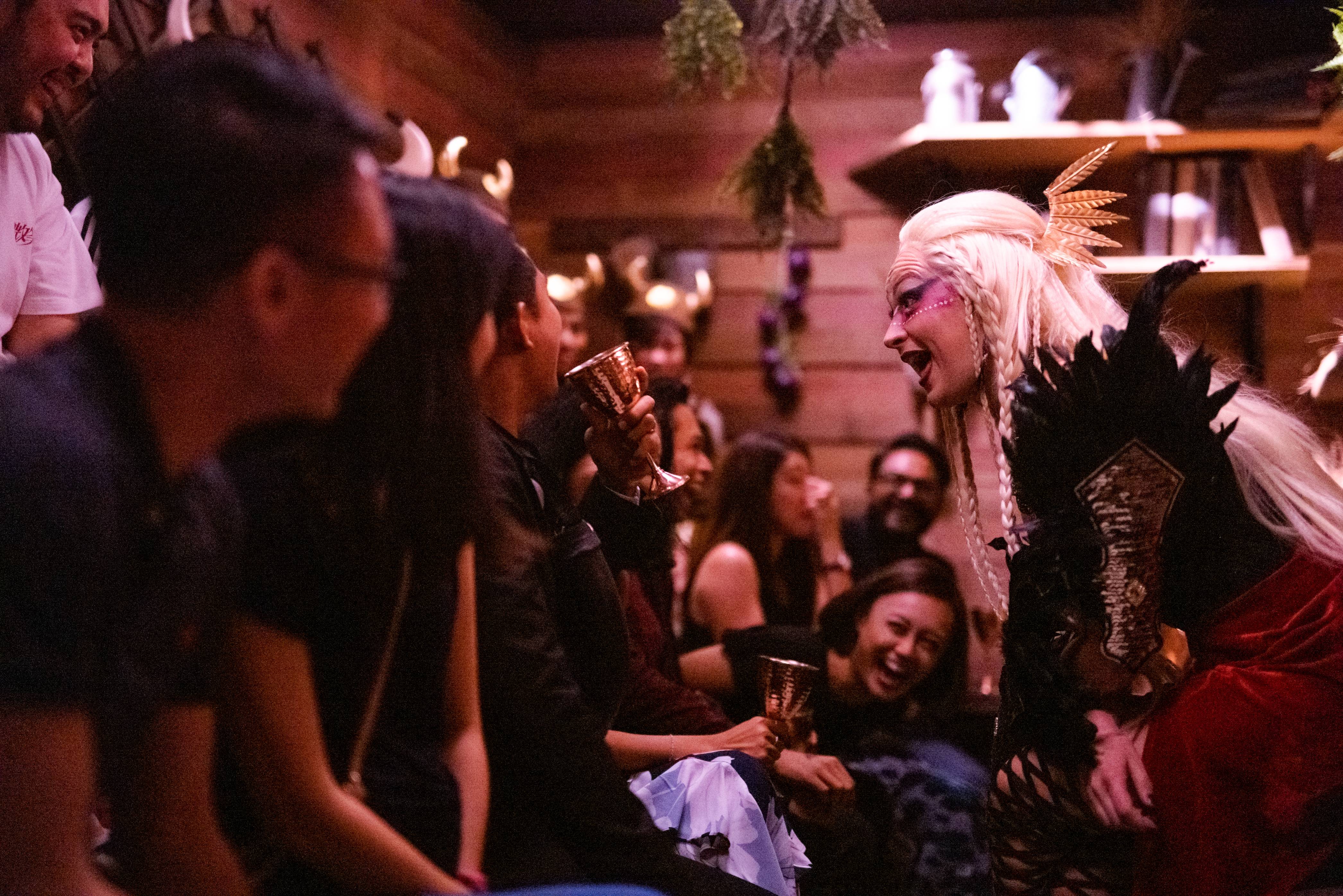 In both these rooms, Andsoforth builds up strong expectations and a rising action that suggests an epic finale still to come, with both Grimhildr and Eir making audience members feel important and integral to saving the world from Ragnarok. But there is a distinct drop in the energy levels once we enter the third room, where we meet bickering brothers Thor (Jakub Morawski) and Loki (Andre Brooke) in a steamy sauna. While the idea to have them duel over improv poetry based on audience suggestions feels fresh, the end result seems muted because of the odd chemistry between both actors. 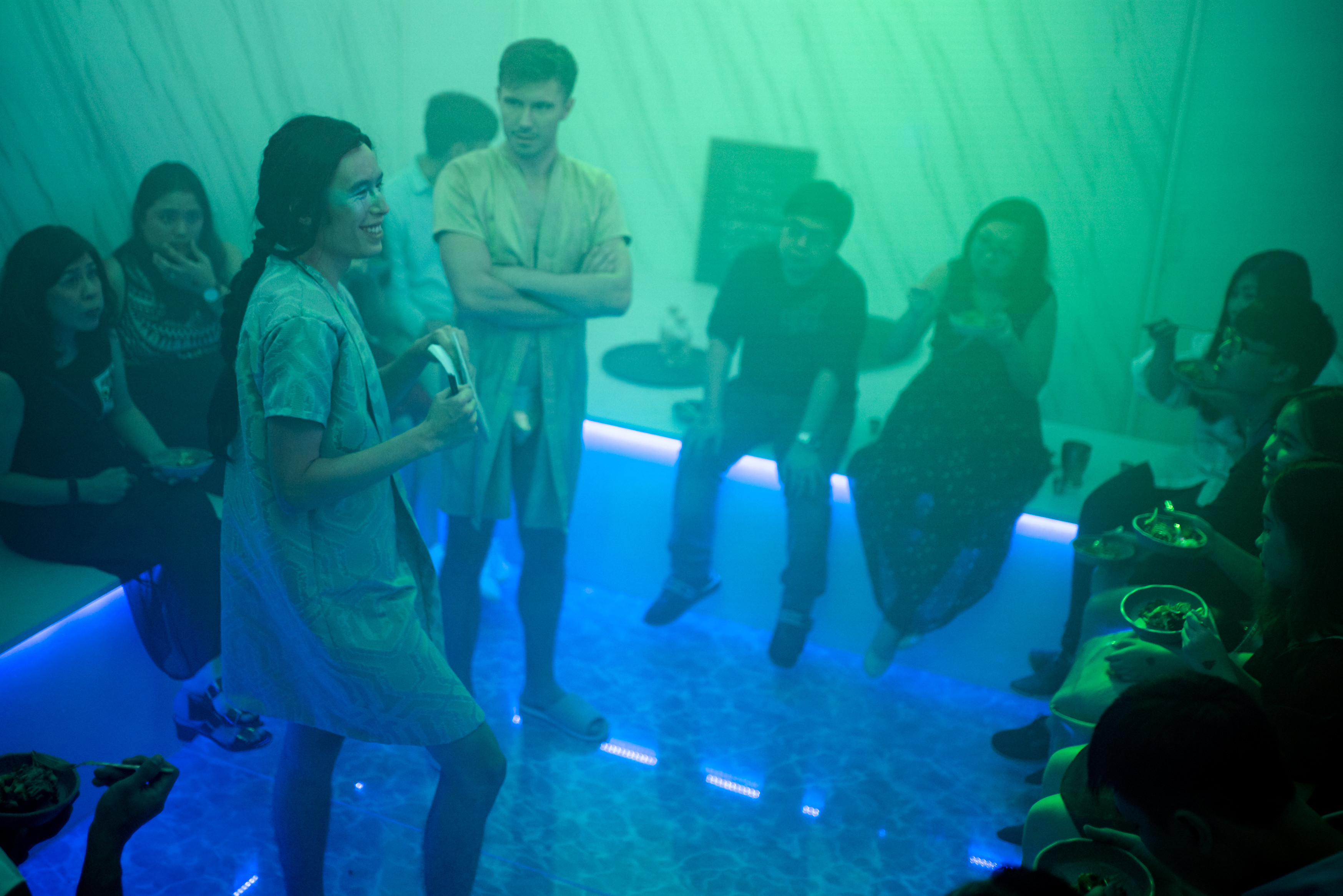 In the following two rooms, we meet the two most powerful gods of all – Freya (Suzana Salleh) and Odin. Freya’s forest-like Folkvangr feels lush, while her Children of the Forest (Stephanie Sim and Matilda Chua) perform impressive aerial silk work at close range, while Odin’s church-like chamber showcases stain-glass style windows and dappled sunlight streaming through. Both gods also show off some of the most impressive costumes of the night (designed by Riyan Haffys), with Freya’s showstopping headpiece and Odin’s leathery, biker-inspired getup, complete with a face almost completely obscured by his beard. 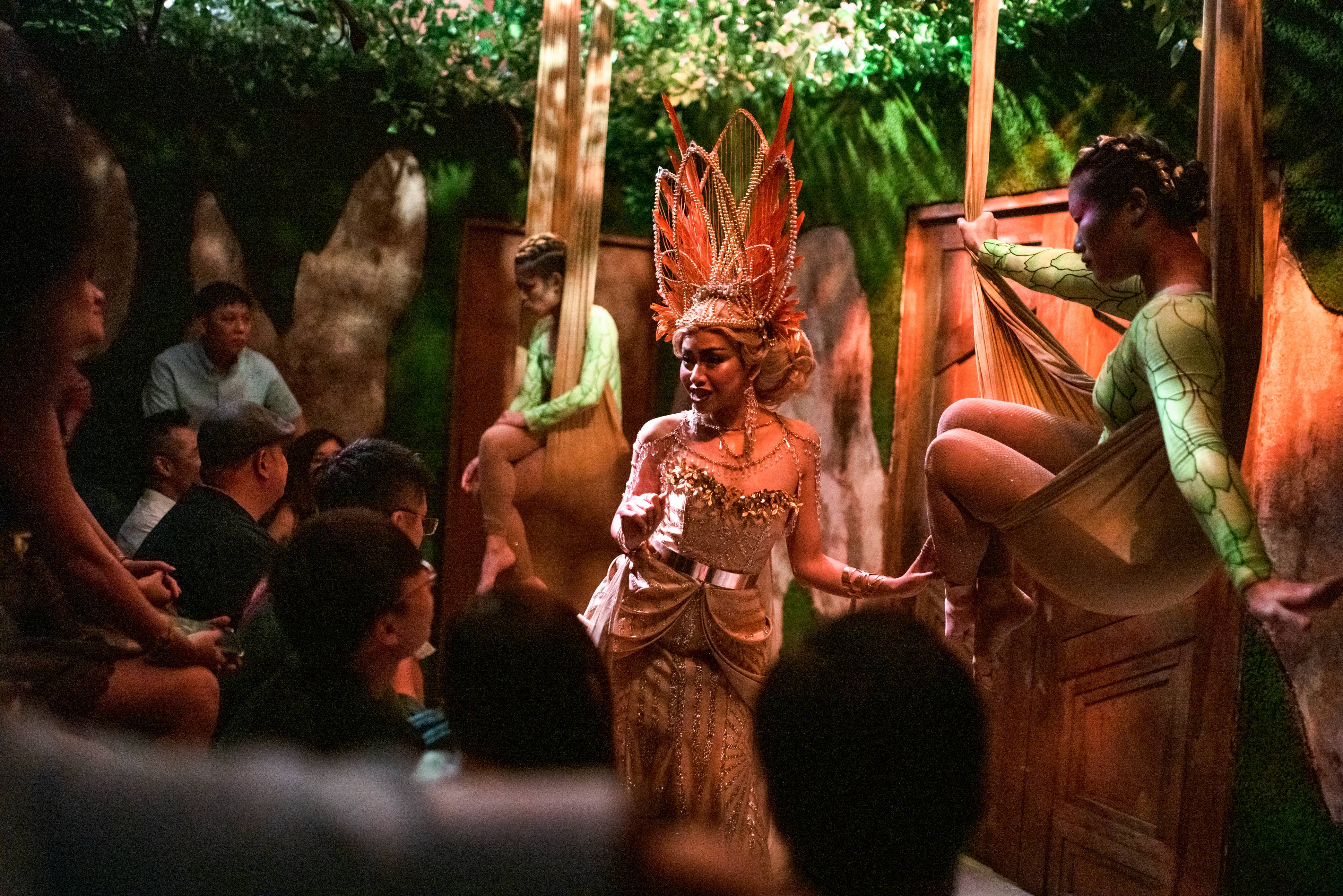 We are never given the promise of Ragnarok at the end, and both gods instead deliver lectures on the wonders of a garden of earthly pleasures (Freya) and a lesson on the origin of Norse mythology (Odin). No matter which god we choose to follow, the end result is inconsequential, and we move on to the final room – Valhalla. 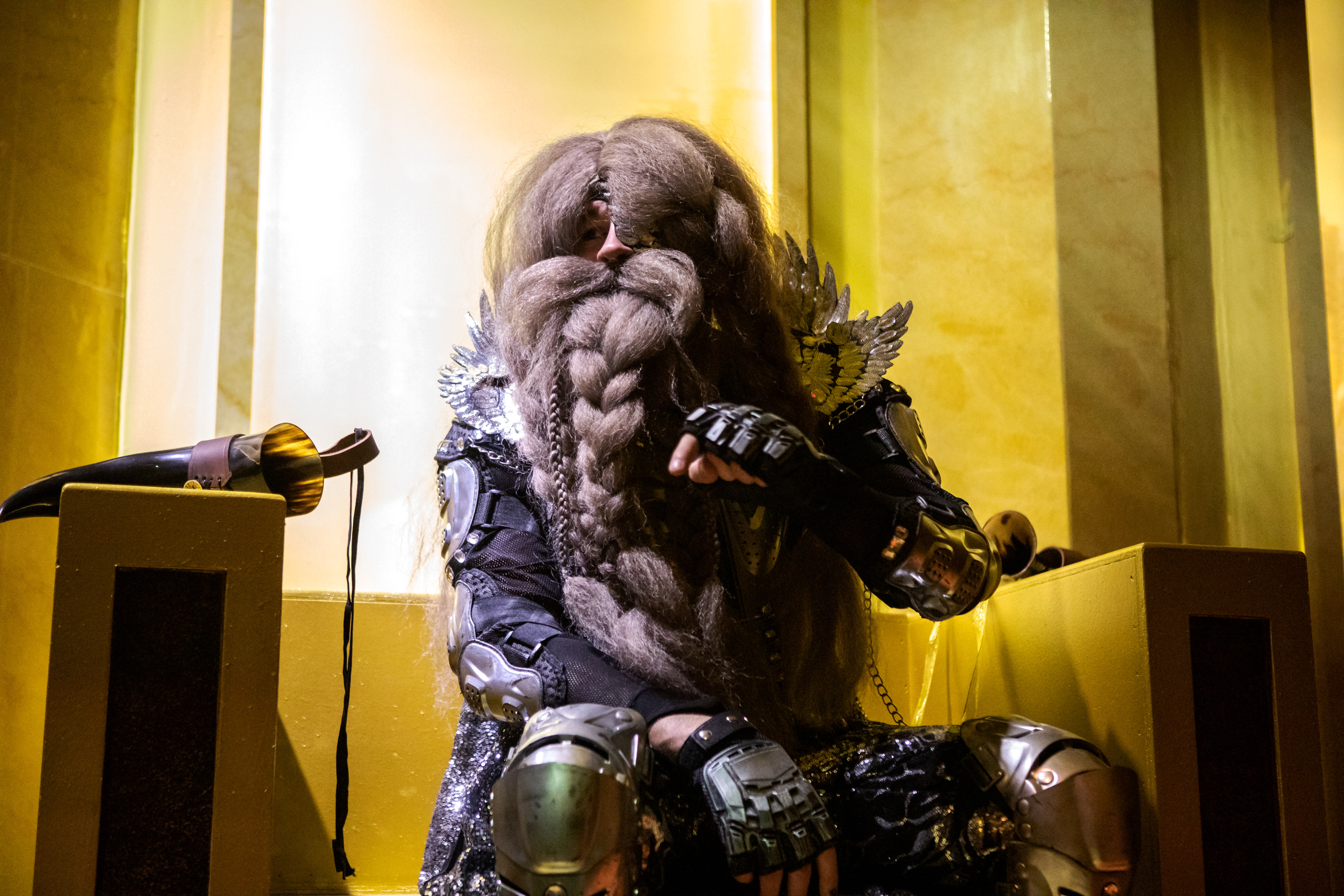 Ascending stairs as if we are truly scaling heights that lead us to the heavens, we find that we still have one final challenge to complete, as set by the bear-like Bob the Berserker. As Bob, the tall, imposing but friendly Shawnrick Hu is given a gargantuan task of having to bring our energy up and lift our spirits after a long night, and does an impressive job with his sheer enthusiasm and gung-ho attitude. Our reward? An opportunity to sit around, relax and chill with our newfound friends, drink heartily, purchase merchandise, and perhaps even meet the owners of Andsoforth themselves. 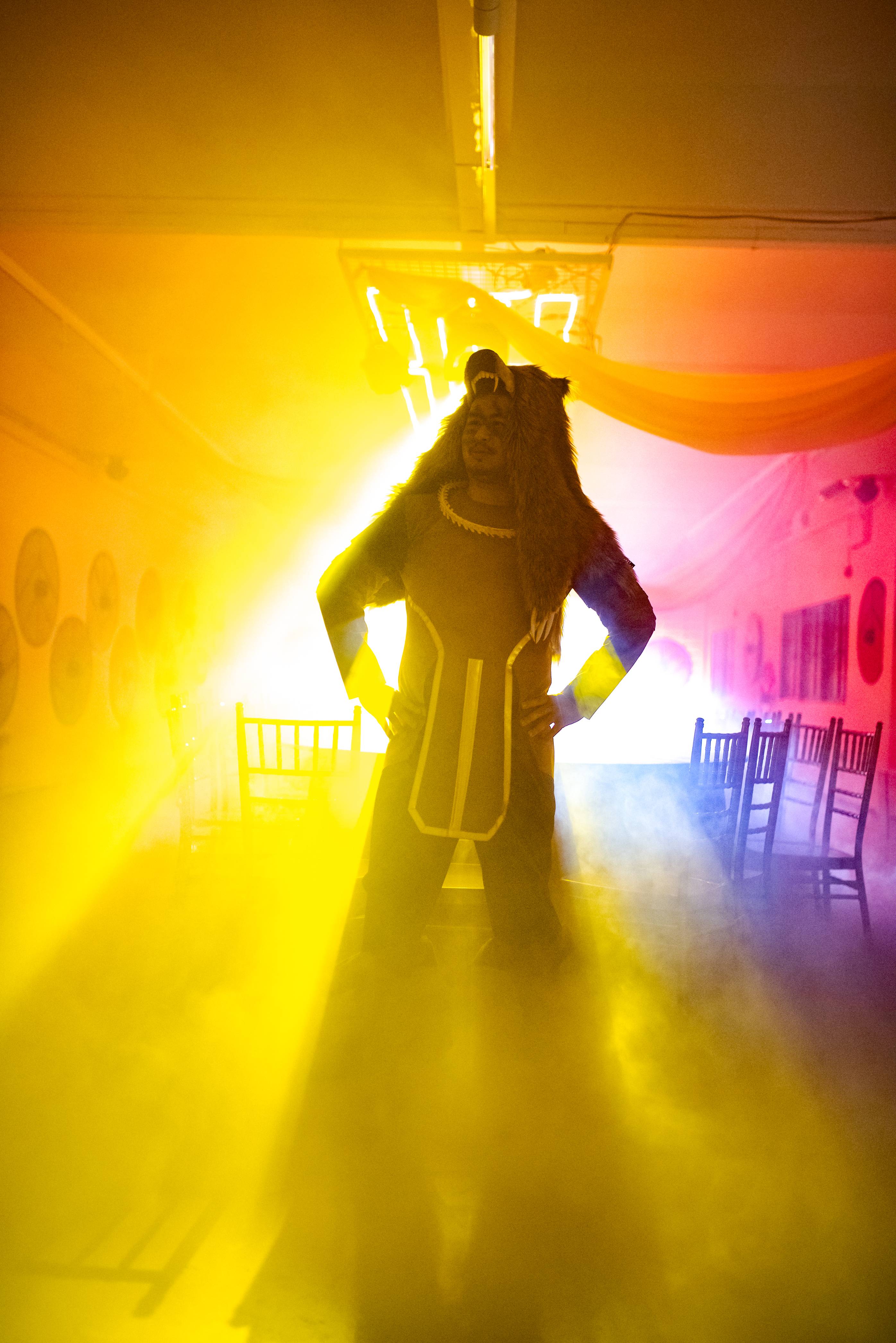 For Andsoforth, Valhalla and the Chambers of Asgard represents yet another strong showcase of their design elements, maintaining their usual high standards in both their elaborate set and costume design, with plenty of research put in to ensure they were accurate to pictorial and historical representations of Norse mythology. More than ever, we felt immersed in this quirky Norse world Andsoforth has created for us.

Visually and gastronomically impressive, Valhalla is a concept rich with potential that takes the company’s work to the next level. While there were certainly some rooms that were stronger than others, as a whole, Valhalla remains a work that remains fiercely faithful to the Andsoforth style and ethos that has won them loyal fans over the years. Gather a group of friends for a fun night out (once you let go of your inhibitions with some drinks), and allow these characters to take you on a colourful journey through the world of Norse mythology, one god at a time.

Valhalla and the Chambers of Asgard runs till 15th February 2020 at a secret location. For more information and tickets, visit their website here

4 comments on “Review: Valhalla and the Chambers of Asgard by Andsoforth”