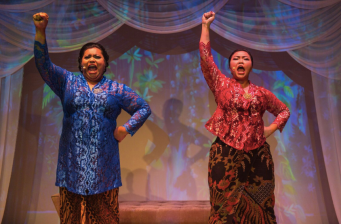 The Necessary Stage’s (TNS) most well-known works aren’t always something you’d readily call ‘fun’, with topics such as poverty, nationhood, climate change and political detainees just a few of the issues they’ve covered across the years. So when they do get a chance to take a lighter concept and run wild with it, the effort is much appreciated, with the opportunity to see a very different side to one of Singapore’s foremost theatre companies. 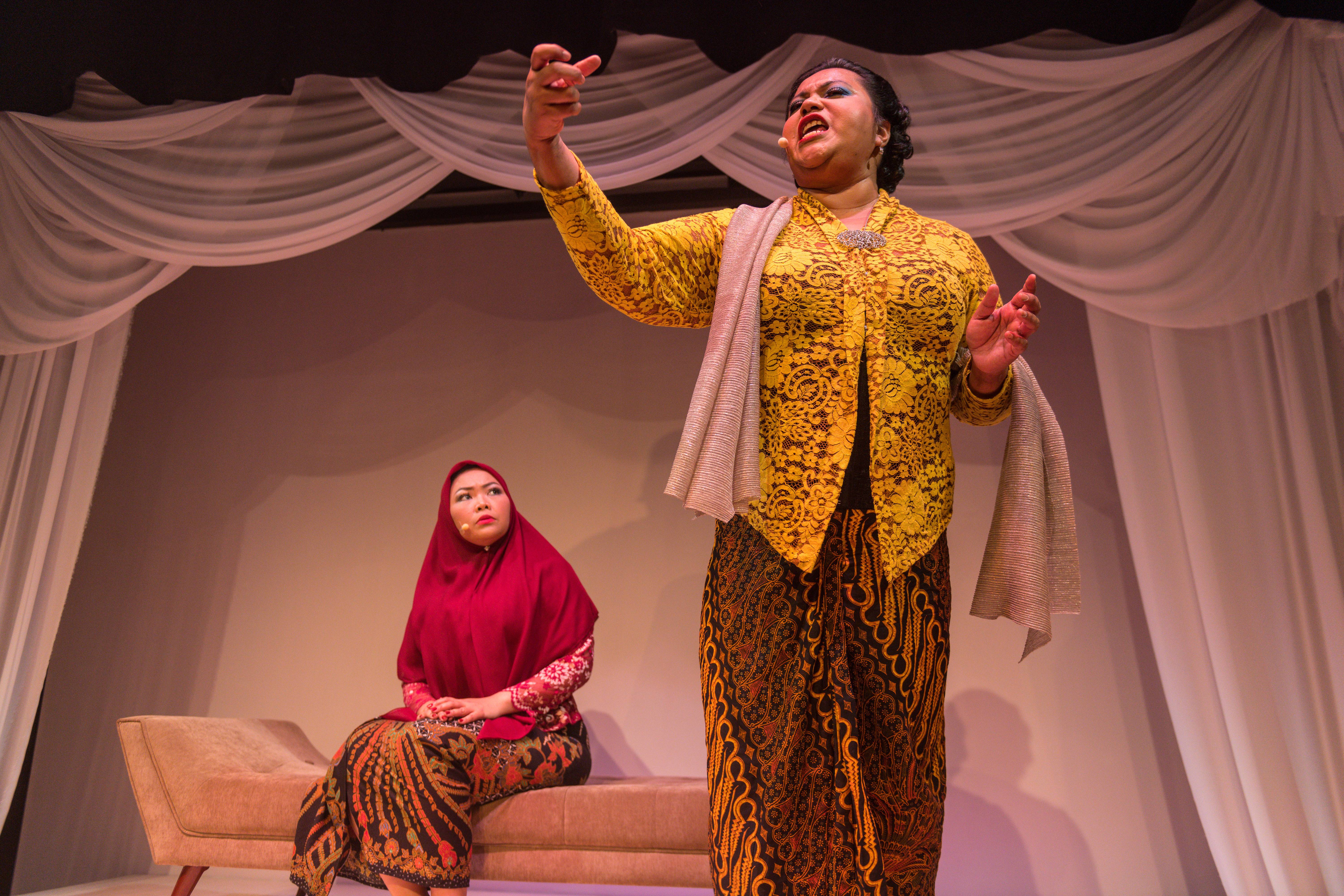 Building off Resident Playwright Haresh Sharma’s large body of work, director Alvin Tan and frequent TNS collaborators Aidli ‘Alin’ Mosbit and Siti Khalijah first came up with a prototype version of Kebaya Homies in 2015 as part of their Orange Playground programme. Now playing as part of the 2020 M1 Singapore Fringe Festival, it feels as if the team has gone all out with this first TNS Fringe show in years, celebratory and undoubtedly fun. 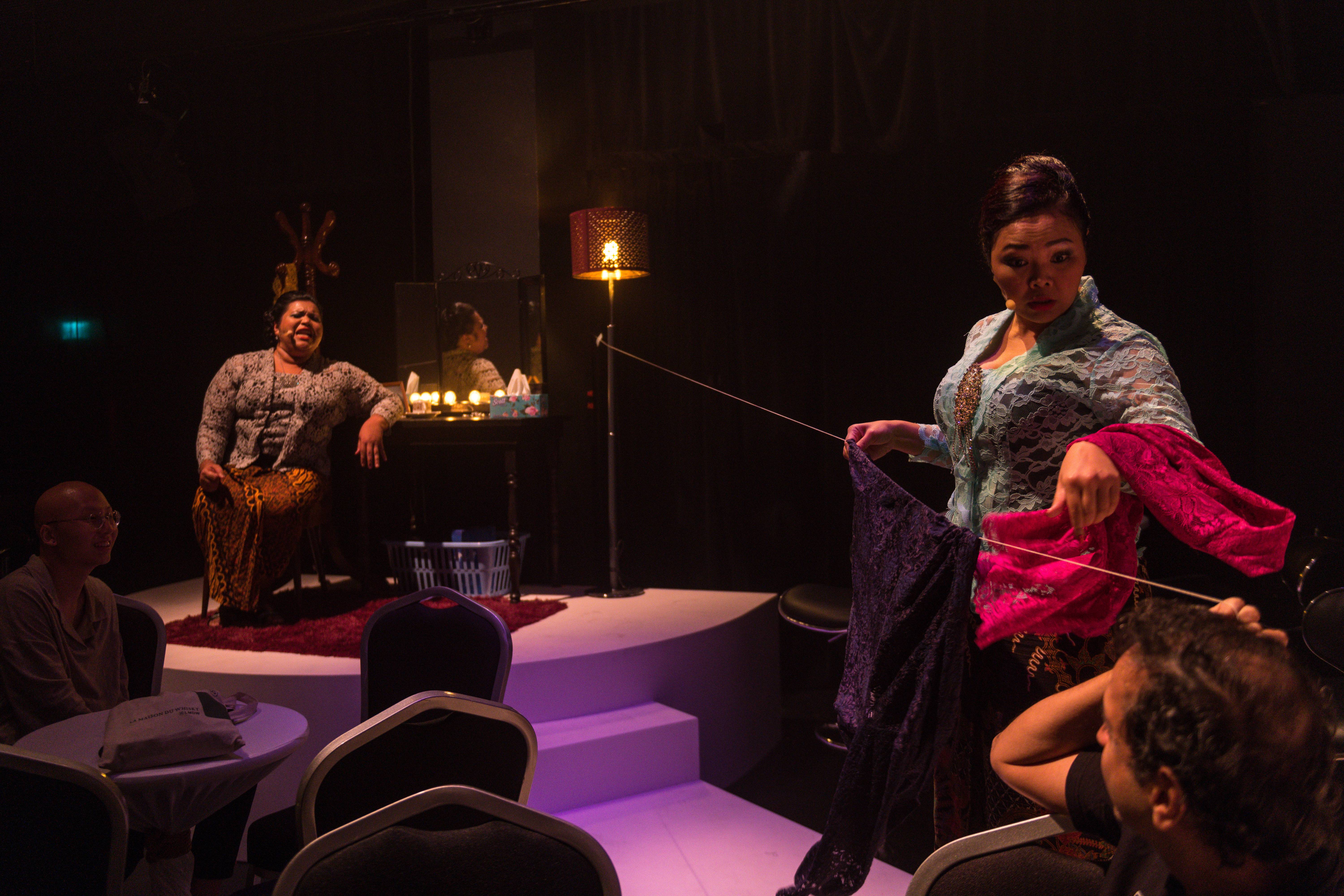 Taking a gander at crafting an immersive experience, Kebaya Homies sets up the Annexe Studio to resemble a club malam, with a small raised stage at the front, ‘dressing rooms’ at the side, and audience members seated in small groups around tables. There’s even a photobooth and a bar serving drinks when one enters. 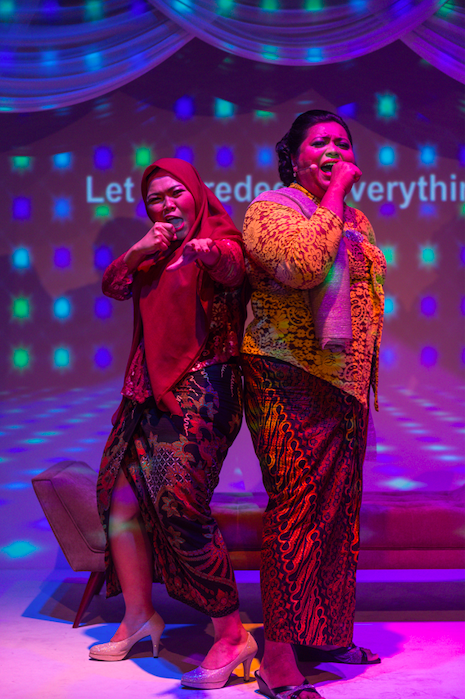 Performers Alin and Siti play Zubaidah and Rukiah, two perempuan-perempuan joget (dancing girls) where the aim is to entertain. Over the course of the evening, we’re treated to a series of scenes both devised and reprised from their roles across past Haresh Sharma scripts, interspersed with song and dance numbers from across the ages, ranging from traditional Malay numbers, to modern R&B tunes from the likes of Brandy and Monica, to Rihanna. 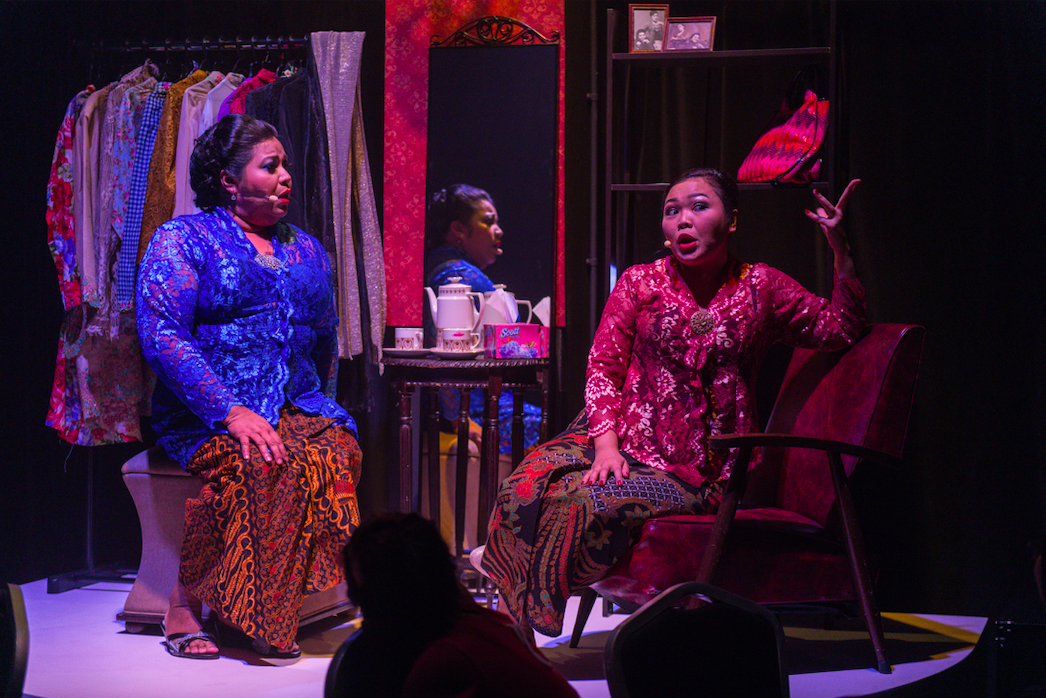 Employing a certain degree of magic realism, Kebaya Homies is also introduced as a ‘time-travelling club’, as the show charts Zubaidah and Rukiah’s unbending friendship over the years. Seemingly ageless, we’re never quite certain how much of what they’re showing us is ‘real’ (within the context of the show), or simply performance, speaking of the duo’s exploits as heroines of legend (accompanied by multimedia from Brian Gothong Tan) or performing lines from their previous roles with TNS in an attempt to string these disparate scenes together via the overarching show’s thin plot. 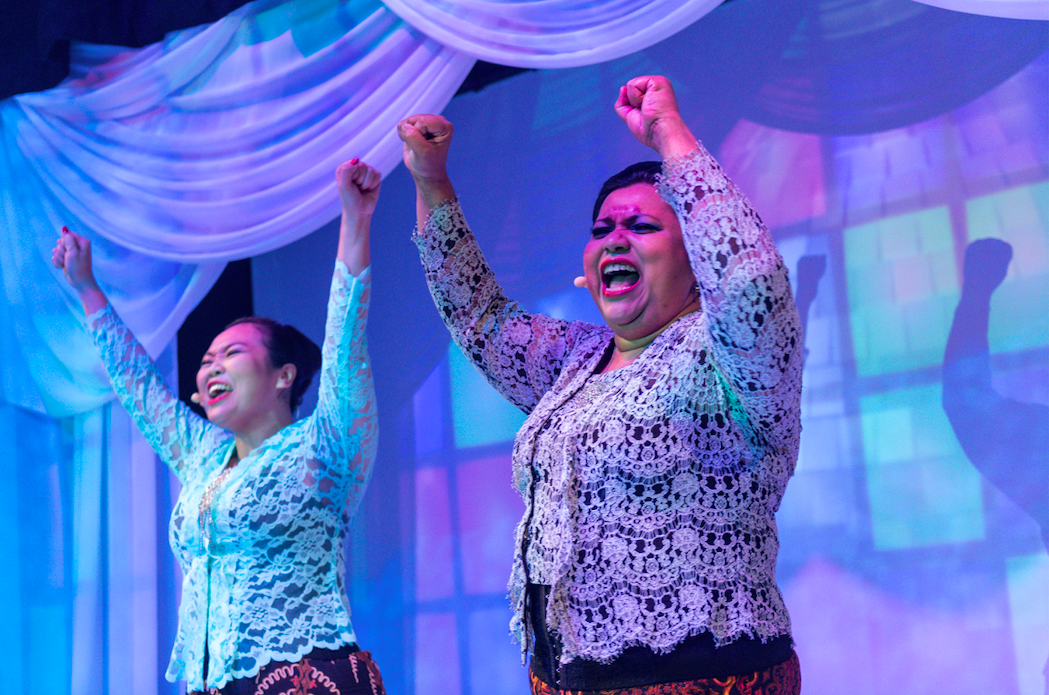 Scenes from Gemuk Girls, Rosnah and even Best Of are recognizable to those a little more familiar with TNS’ body of work, acting as Easter eggs for longtime followers. These scenes and lines end up forming a fascinating tapestry of Malay culture, discussing the ‘Malayness’ of kebayas versus tudungs, the ‘Arabization’ of Malay culture, imagining a world where Malaysia and Singapore never separated, or even the difficulties of bringing home a white boyfriend to conservative parents. On occasion, each actress is also given a chance to perform solo scenes, not only educating on the significance and intricacies of the kebaya, but even managing to take potshots at how Singapore has managed to fetishize itself as a means to promote tourism. 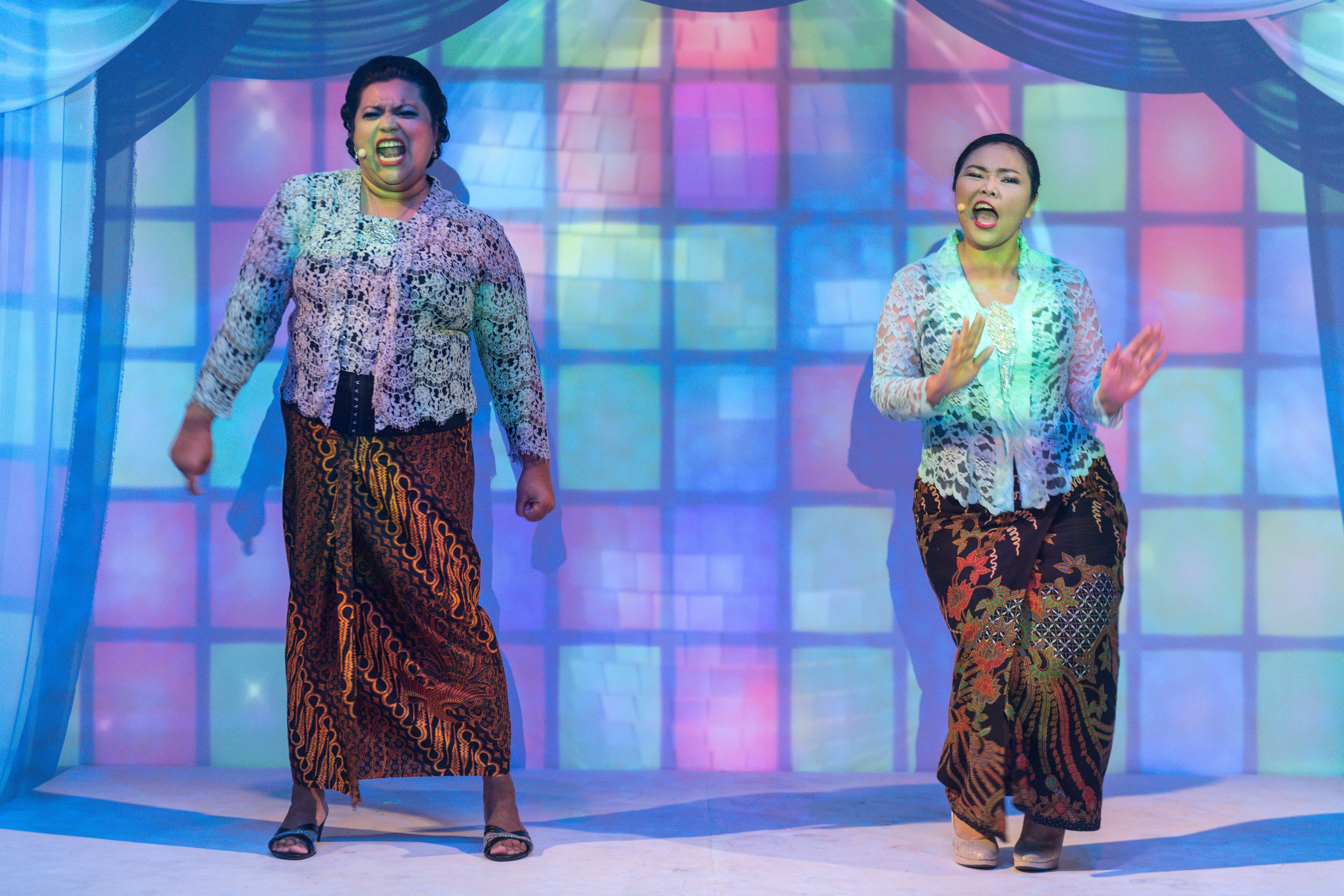 While the plot very quickly ceases to make logical sense, as a string of scenes that don’t necessarily link up, what makes Kebaya Homies enjoyable is how they never purport to come in delivering a big important message to take home. For every poignant line about what it means to be a Malay woman, there is often also an absurd moment of comedy that follows right after. It is to Siti and Alin’s credit that their incredible onstage chemistry and performance is what carries the entire show, leaning in entirely to its weirdness and their individual charm to make audience members believe and let themselves into this campy, disco-hued world (Aretha Franklin’s ‘I Will Survive’ even makes an appearance at one point). 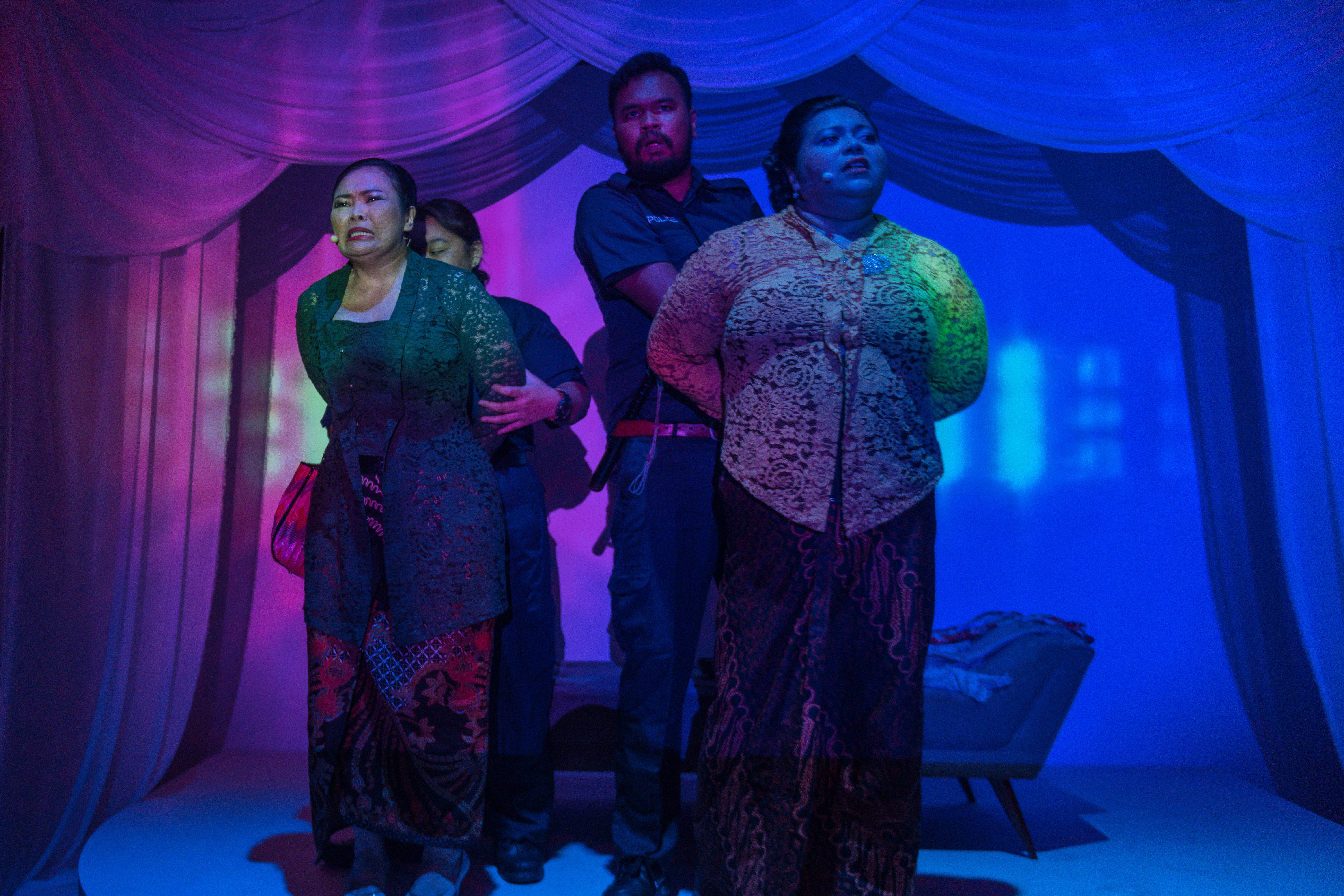 The point then of Kebaya Homies, is to capitalise on the offstage friendship of Siti and Alin to make an eternal onstage one believable. Over the course of Kebaya Homies, despite their differences and individual problems, an over the top police raid sequence, and even moving the club to a thriving gay community on Bintan, Zubaidah and Rukiah remain bonded by a sisterhood that withstands the ravages of time and circumstance. 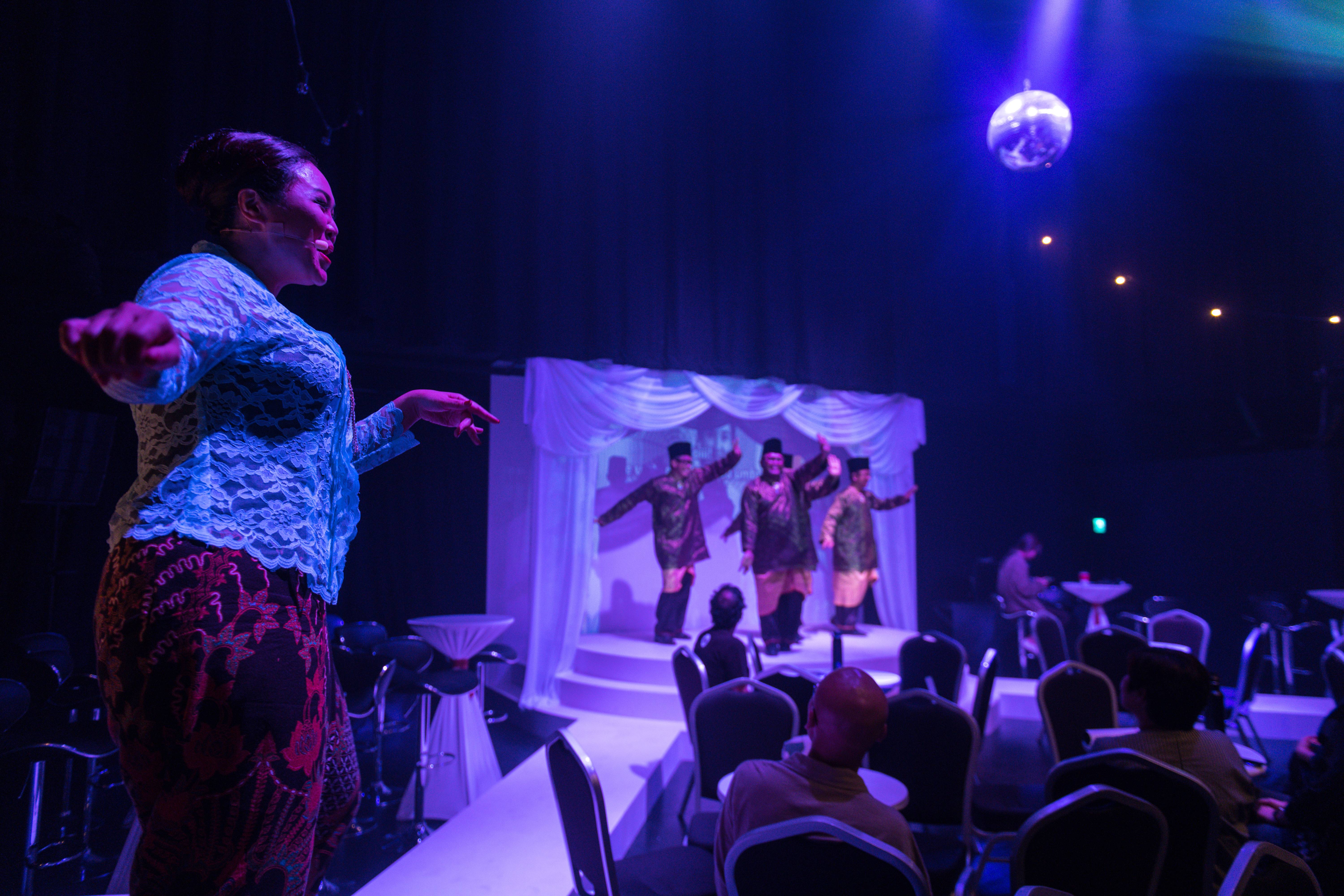 Anchored by strong performances, a madcap trip of a journey and whole lot of irreverent fun, Kebaya Homies represents a fringe show done right, showcasing a side to TNS they so rarely get a chance to do in their main season. There are some shows that don’t need too much reflection on the audience’s part, and Kebaya Homies has succeeded at showcasing just how close these two ‘homies’ are going through thick and thin, celebrating their roles and friendship. You may not walk away having learnt anything new or having had a huge life-changing revelation, but what it makes for is a fun night out at the club, with Siti and Alin as our kebaya-clad hosts we’re more than happy to be a part of, singing and dancing into the night.

Kebaya Homies plays from 15th to 19th January 2020 at the Esplanade Annexe Studio as part of the 2020 M1 Singapore Fringe Festival. Tickets are SOLD OUT.