In United Queendom, experience the incredible true story of two powerful women often overlooked and forgotten by history; the smart and intelligent Queen Caroline and the enigmatic and passionate Lady Henrietta Howard, told within the palace’s magnificent State Apartments, once home to both women.

Step into the court of King George II. He’s decided to celebrate his birthday, but little does he know that his mistress, Lady Henrietta Howard, is about to drop a bombshell. And she’s seeking an audience with his wife Queen Caroline first! Meet Henrietta, the girl born in Norfolk, who married a drunkard, lost everything and then ascended to everything.

Or instead, you might meet Queen Caroline, one of the first people to inoculate her own children, who introduced Sir Isaac Newton to court and established women only educational forums, is changing the face of court, re-defining what a woman can and should be, and ruling her husband with just the right amount of good advice and steely leadership. But can this queen rise above the constraints faced by women in the 18th Century? 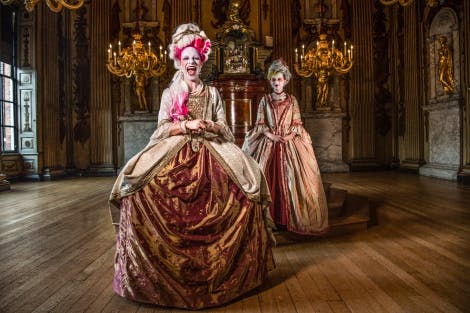 Delving into the world of political intrigue, court games, high drama, scandalous gossip, and smiling through gritted teeth, this immersive theatre show presents you with a choice of two separate journeys highlighting the stories of these brilliant women who might have otherwise been lost in the shadow of their king.