Due to the ongoing COVID-19 situation, Berak has been cancelled.

Originally written by Chong Tze Chien and presented as Poop by The Finger Players, this March, Teater Ekamatra adapts the play into Malay, presenting it as a brand new production at the Ngee Ann Kongsi Theatre at W!ld Rice.

Berak chronicles the aftermath of a suicide: A grandmother bargains with divine powers to release her son’s soul from hell. Failing which, she brings him home; she takes over the reins of bringing up her granddaughter, while keeping her daughter-in-law at bay, saving the granddaughter all for herself. She tries to instill in her granddaughter that death is merely a joke, that there’s nothing to cry about as she takes her on a mind trip towards the underworld and purgatory. 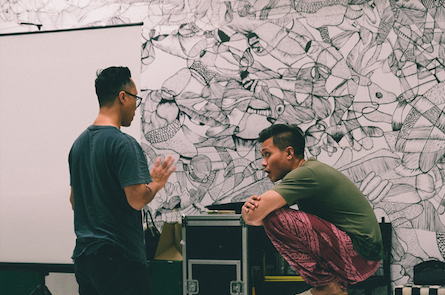 These personal fantasies of the afterlife are challenged however when her granddaughter contracts a terminal illness. The never-ending days of mourning are brought to lurid 3-dimensional, high-definition life as the agonizing wait for the ultimate redemption is an imprisonment in the realm between living and non-living on earth.

Adapted by Zulfadli ‘Big’ Rashid, and directed by Teater Ekamatra artistic director Mohd Fared Janial, Berak will star Aidli Alin Mosbit, Fir Rahman, Siti Hajar Abdul Gani and Siti Khalijah Zainal. In our 2018 review of Poop, we described the play as “swelling with raw emotion while evoking the heartbreak of everyday tragedies, cleverly weaving in whimsical humour amidst its pitch black plot to deliver a powerful portrayal of death and its effects”. Will Teater Ekamatra’s adaptation be able to live up to this precedent set? Find out, as Berak premieres this March. 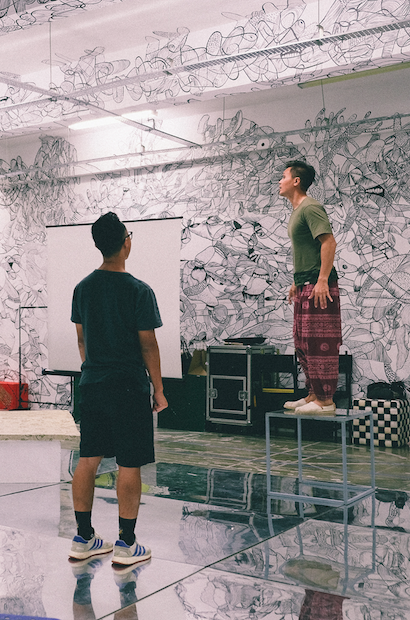 Bakchormeeboy: When was the decision to adapt Poop into Berak decided, and why?

Fared: Poop is just a great play written by Chong Tze Chian and it’s one of those that strike an emotional chord based on the plot and premise. Ekamatra has been dealing with difficult issues that may not sit well in the community. In Hope (Harap), it was about suicide and homosexuality, while Potong dealt about dementia in the family with a transgender character.

They may be difficult issues but they deserve attention as we continue to represent a wide spectrum of people within the community, not just the majority. It may not be up to us to find a solution, as that is a collective effort. But the bottom line is to acknowledge and not sweep it under the carpet. Staging Poop at some point has always been in our mind, but we only seriously thought about it about 2 years ago, in line with our fascination with doing transcreated works. 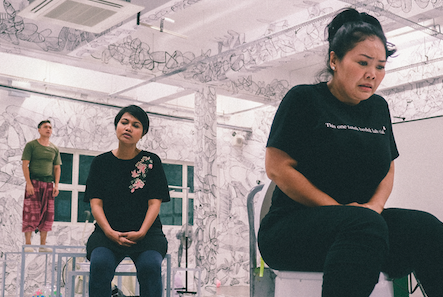 Bakchormeeboy: In the original Poop, The Finger Players used puppetry and elements of black light theatre in their production. In terms of staging and set design, how different will Berak be, as compared to the Finger Players’ version?

Fared: The Finger Players have done a remarkable job with the aesthetics of puppetry in all their versions of Poop, but we are not a puppetry company and we can’t pretend to be one. It is always possible to use that device, but it will need a longer runway to learn, understand and be very good at it. We’d rather focus on what we are comfortable with.

For our version, it will be the usual set, sound and light. But as apparent in most of our shows for the last couple of years, the use of multimedia is another added element that alleviate the storytelling, and that is one area where we are constantly pushing with every shows. It is not easy as it requires extra effort beyond the rehearsal space and time, but when everything is being put together, in tandem with the other production elements, it does provide another layer, another perspective.

Our starting point for Berak derives from the quirky works of Michel Gondry which is distinctive in his films and music videos. There is an innocent child-like elements that exist in most of his works and we try to add that as another layer to Berak. So get ready to see some fun stuff that the actors do on stage and how the designers create the world around it. 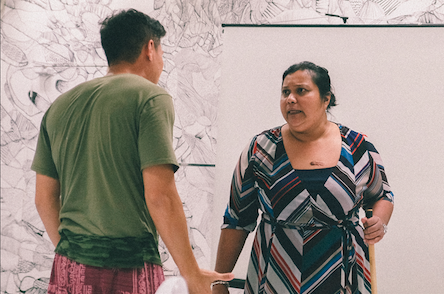 Bakchormeeboy: One of the things that was lost between The Finger Players’s stagings at the Esplanade Theatre Studio version and the Victoria Theatre version was the sense of intimacy afforded thanks to the size of the stage. With Wild Rice’s theatre, how do you plan on retaining that sense of intimacy with the audience?

Fared: Ngee Ann Kongsi Theatre is already an intimate space, despite holding a capacity of 358. It has great acoustic too. But the bigger challenge of that space is the sightlines and acknowledging that audience are really all around, from three sides as well as on top. Being a dedicated thrust stage and the first of its kind in Singapore, it does pose a challenge to all directors and actors. But as theatre-makers, we ought to grasp such challenges as it should keep us on our toes and not get too complacent. 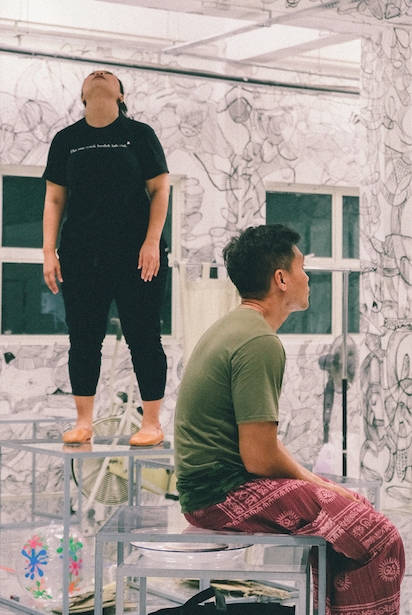 Bakchormeeboy:  In terms of casting, how immediate were the actors you had in mind for each role, or did Ekamatra keep an open mind as to who might be cast in Berak?

Fared: Over the years, Ekamatra have worked with some wonderful actors who understand our style and approach, and always ready to be pushed beyond their own comfort. Casting can be tricky, because we may have our wish list, but at the same time it cannot be a hit and miss or random approach.

This is when knowing your peers and their capabilities become very important. For Berak, we were quite certain with who we would like on board, and also very grateful that they are willing to do so. 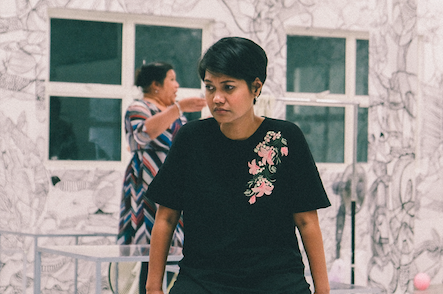 Bakchormeeboy: What are your own personal views on death and the afterlife, and how is it that we can learn to cope with grief in the aftermath of a tragedy?

Fared: There are two ways to look at the concept of die before you die. For some, it is a conscious decision and the art of letting go. You choose what is essential to you. But for others, their life reached the end before the physical death. When someone you love left you, how long does it take for you to come to term with it?

Our stream of consciousness and our relationship with the higher being force us to understand life and death in an abstract, fluid and blurred way because sometimes we are dead long before we are buried, we can’t let go of someone we love long after they are gone, and our impression of the afterlife is so vivid as if its within touching distance. How do you measure grief? You say you have moved on but the grief still stay in you. It is about how and when you choose to unlock it. But you learn to cope, with family, friends, surrounding or a change of pattern in life, just to break from the old cycle.

With empathy, love and unconditional support, we build the strength to move forward. 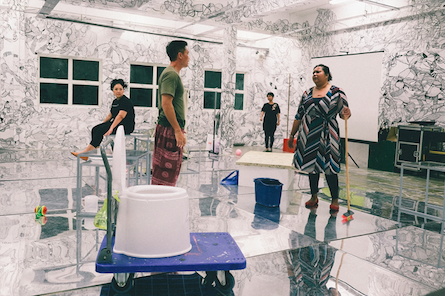 Bakchormeeboy: How closely did you work with Chong Tze Chien, and what were some of the biggest concerns or challenges you had in the process?

Big: We met once. In 2019 if I recall correctly. Tze Chien was really cool about Ekamatra’s intention to stage Poop in Malay. I think he gave us his blessings to do what we deem fit for the play we would be staging.

I am always discussing with Fared and Safuan (the sound designer) how to ensure that Berak is not merely a translated play performed by Malay actors. Berak must exist in a Malay universe with all its absurdities and peculiarities. Only then I feel, we can have an honest conversation with regards to the play’s subject matter.

I had no big concerns or challenges in adapting Poop, just curiosity. I am curious to see how different this play would be from the original, with the different belief systems and taboos that the Malays hold on to as compared to the original characters. 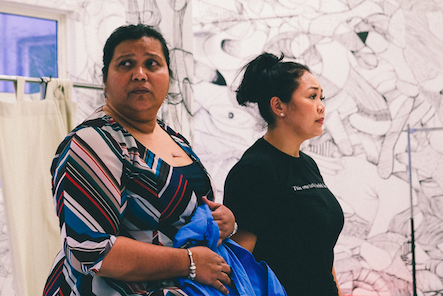 Bakchormeeboy: While the original Poop was not tied to a specific religion, by virtue of the family in Berak being Malay, one imagines that Islamic views of death and the afterlife inevitably become touchpoints in the play. How do these play into your script, and is it any different from how Poop handles it?

Big: You can never escape death and grief, no matter what belief system you hold on to. Berak, like Poop, takes on a layered but candid take on religion while we cope with death and grief, albeit in a Malay-Muslim universe. 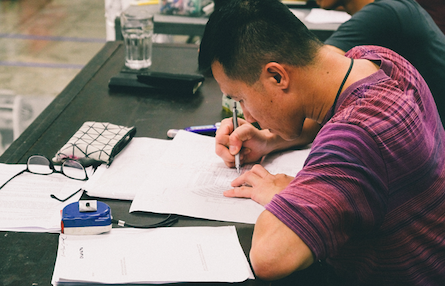 Bakchormeeboy: What determines the necessity of a non-Malay work to be translated into Malay for staging, as opposed to simply performing an English text but with Malay actors? 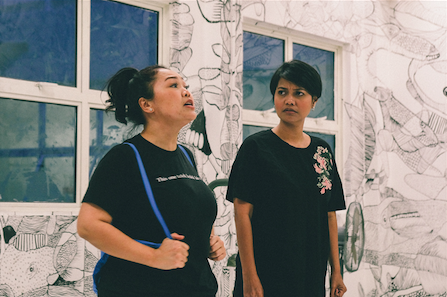 Bakchormeeboy: What are your own personal views on death and the afterlife, and how is it that we can learn to cope with grief in the aftermath of a tragedy?

Big: The living is more important than the dead. Take care of the living. 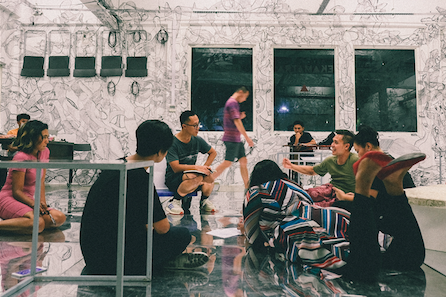 Berak was initially to play from 25th to 28th March 2020 at the Ngee Ann Kongsi Theatre @ W!ld Rice. but has been cancelled due to the COVID-19 situation. For more information, visit their Facebook page here

2 comments on “Preview: Berak by Teater Ekamatra + An Interview with the Creatives [CANCELLED]”