Immersive theatre for social change has an interesting premise marred by a host of problems.

With immersive theatre being one of the trendiest, most exciting forms of theatre today, it’s no surprise that everyone wants to get on board and create a production of their own. And for Underground, not only has the company attempted to capitalise on the entertainment value of immersive theatre, but also harness its potential to evoke change in audience members with their new production Hurstville: The Heir.

Playing at a multi-storey shophouse just off Chinatown, Hurstville draws inspiration from established immersive productions, such as Punchdrunk’s Sleep No More. Set in a hidden village during the Great Depression, Hurstville gives audience members free reign to explore the space and follow a myriad of characters over the course of the performance. Each character the audience meets has their own story to tell, and based on audience decisions and interactions, will either choose ‘regression’ or ‘redemption’ for themselves.  For every audience member, their experience of Hurstville is shaped by their choices and interactions with the space and characters, and based on their own backgrounds and perspectives, results in a completely different experience for every person. Even the ending of Hurstville is dependent on the decisions audience members make, and how they choose to interact with the characters.

While the idea sounds novel, Hurstville is unable to fulfill the first rule of immersive theatre: to be able to transport audience members to a different world. From the moment we step into the building, we do not feel as if we’re in a quaint village, with the sights and sounds of Chinatown still clearly visible and audible. For one thing, the parquet flooring feels anachronistic, and overall, the set seemed to be incomplete, or cobbled together at the last minute. Some effort was made in creating a forest-like environment, with the smell of woodchips and a mysterious altar on the ground, but this was not done throughout, at times feeling like we were still in an abandoned shophouse. In spite of actors dressed in appropriate vintage clothing from Vintage1961, our experience was marred by seeing staff dressed in modern attire, such as jeans, showcasing a lack of discipline in keeping up a consistent immersive experience. 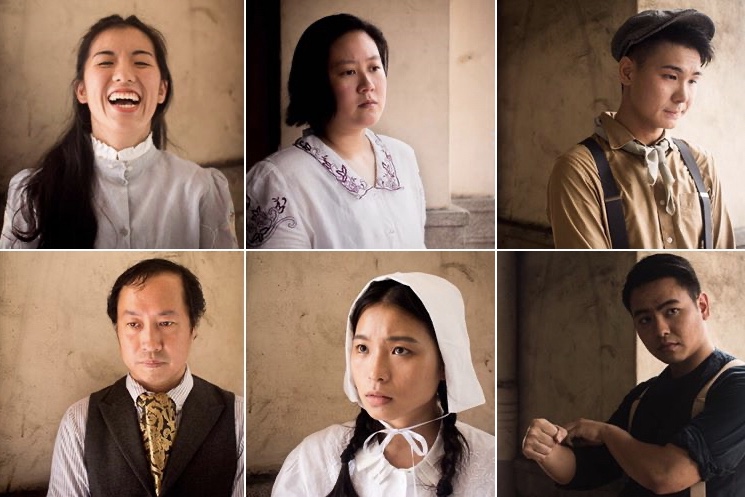 While there was a speakeasy bar, which featured a mocktail and two cocktails specially designed for the experience, there were no other opportunities for audience members to purchase additional drinks nor did they have any hydration points throughout the experience. As the bell rings, for those who opted to attend the banquet (at an additional cost from the show ticket), we made our way up to the chapel, where our ‘feast’ awaited us. While they used this space well to recreate a chapel, there were many elements that didn’t match. For a banquet, one would expect a grand table setting, but it was clearly a number of smaller tables placed together. Though we expected to be in the middle of a forest, the decor used clearly comprised of plastic leaves and shrubs, and broke the illusion.

Prepared by chef Tay Yi Xian, it was evident that there was a lot of effort and thought that went into preparing and plating each dish in this three-course menu. We were first served butternut squash soup. The butternut was well-pureed butternut and served with a dollop of cream to add lusciousness and fullness to the soup. For our main course, we were served braised beef with mashed potatoes (compliments to the chef for using real potatoes, not instant ones), served with a side of baby carrots and heirloom tomatoes. The beef was beautifully cooked, served with a delicious jus that tied the whole dish together. However, all of this was undermined by the fact that every dish was served cold.

As we ate, we watched as the chaplain entered and conducted Catholic confessions with the other characters, sitting with them and listening to them before delivering a sermon. It felt apt that we were here on a Sunday, a time for mass and worship together, creating the atmosphere of a real church before service, and one of the few parts of the script that felt clear. While exploring the ‘village’, we came across three ‘shopfronts’. Featuring a baker, a carpenter and a tailor, each shop was clear in portraying what their professions were. It’s almost like how in our daily lives, we put on our best face for the public. But we also have our own lives to lead, and at the back of each shops, there was also space for each character to show how they were really feeling. 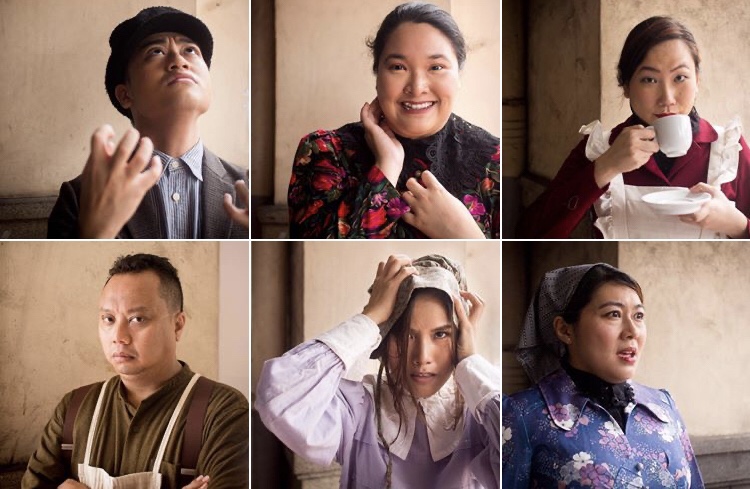 But again, there is simply too much inconsistency in Hurstville to compel us to believe in its stories or inhabitants, unable to leave us intrigued by its characters’ plights. In addition, the Great Depression setting has little to do with the stories that unfold. Co-directors Sheena Ling and Dyllis Teo have championed the work as an exploration of mental health and a means to break barriers by showcasing daily struggles, but Hurstville ends up more frustrating than rewarding across all our interactions, and there is little attachment or reason to care about any of the characters.

While the team at Underground was forced into changing their venue at the last minute, and to their credit, still managed to put on a show, Hurstville feels neither clear in its aim nor elegant in its execution, ultimately unfinished and unconvincing in its intent to make audience members aware of how their decisions have consequences. From the beginning, Hurstville has been an incredibly ambitious project for Underground to attempt. Through this experience, one hopes they learn the valuable lesson in how difficult it is to put up an immersive theatre production. While we’re always supportive and excited to see new talent and companies arrive on the scene, Hurstville shows little ambition and a need for Underground to do better research and show more professionalism, should they still choose to stay on in the immersive theatre scene.

Hurstville: The Heir runs on Sundays and Mondays at 265 South Bridge Road, from 1st March to 20th April 2020. Tickets and more information available from their website here