The teenage years can be one of the most brutal in a person’s life. Academically, secondary school is a huge step up from primary school, while one’s body goes through the ravages of puberty, and the people you thought would be friends forever begin to slowly drift away. It’s no wonder 13-year old Abriana Yeo feels a little like an alien at Bukit Timah Secondary Girls’ School.

But she’s in for the surprise of her life when foreign student Octavia Wu joins the school and becomes her new desk partner (and neighbour), who as it turns out, is an actual alien from the planet Viridis. Crash landing in Singapore after escaping an invasion, Octavia has gone undercover as a student to seek assistance in her quest for the Anteris – a key element that could help her family return home and help in the war effort.

Awkward, unsporty and friendless, readers who’ve ever felt like a misfit are likely to find a kindred spirit in Abriana. It’s little wonder that she feels a sense of aloofness when she first meets seemingly perfect Octavia, who feels like Abriana’s polar opposite. But as the old adage goes, opposites attract, and the two become fast friends the moment Octavia reveals her secret to her (including having super strength). Abriana is quickly drawn into Octavia’s world as she learns of her prestigious heritage and gets introduced to the newfangled alien technology her family possesses.

It’s easy to get hooked and binge read My BFF Is An Alien in a single sitting, not just for its very manageable length, but also how it dives straight into the girls’ quest and keeps up the pace for the rest of the novel. Less than 40 pages in, and the two are already off on an islandwide adventure, with landmarks ranging from the Botanic Gardens to Sentosa that will spark the imaginations of any Singaporean resident. Weaving in these missions as afterschool activities (as instructed by Octavia’s parents) also ensures the book doesn’t encourage younger readers to skip school and remain responsible students.

Throughout the novel, Octavia and Abriana constantly face off against a group of popular mean girls. While they’re mostly one-dimensional stereotypes, their pranks give rise to a couple of fun antics and schemes the girls develop to counter them. Of the mean girls, Naomi, formerly Abriana’s best friend, helps add emotional depth to Abriana as she struggles with accepting how Naomi has moved on. And while there are cute moments where both girls bond over local dishes or during class and CCAs, it is ultimately a potentially devastating mishandling of trust that, once resolved maturely, truly seals their friendship as BFFs.

As the first book in a four-part series, My BFF Is An Alien works well both as a standalone novel and as a good set-up to the girls’ adventures still to come. Vivian Teo has a firm grasp over making slice of life stories relatable and accessible to younger readers, and introduces just enough sci-fi elements to still feel fresh. Coupled with the whimsical illustrations by Ng Min Min, My BFF Is An Alien is a simple but fun read, its final chapter especially powerful in its ability to evoke what it feels like to miss your best friend. Readers will find it easy to believe and hope that they too might find an Octavia Wu in their life before long.

Recommended for: Upper primary and lower secondary students who wish that their school days were a little more exciting, and are itching for an adventure. 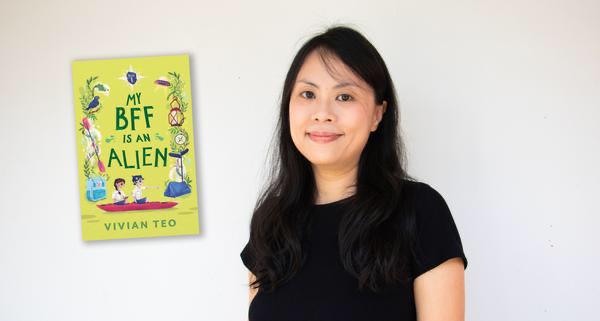 My BFF Is An Alien is published by Epigram, and available online here