HONG KONG – 2020 may have brought the pace of the world to a crawl, but for promising young choreographers Felix Ke, Christy Poinsettia Ma, and KT Yau, there’s no slowing down, each of the three choreographers presented brand new works reflecting on the broken state of society and even the value of identity in performance as part of City Contemporary Dance Company’s (CCDC) Project NEXT Wave. 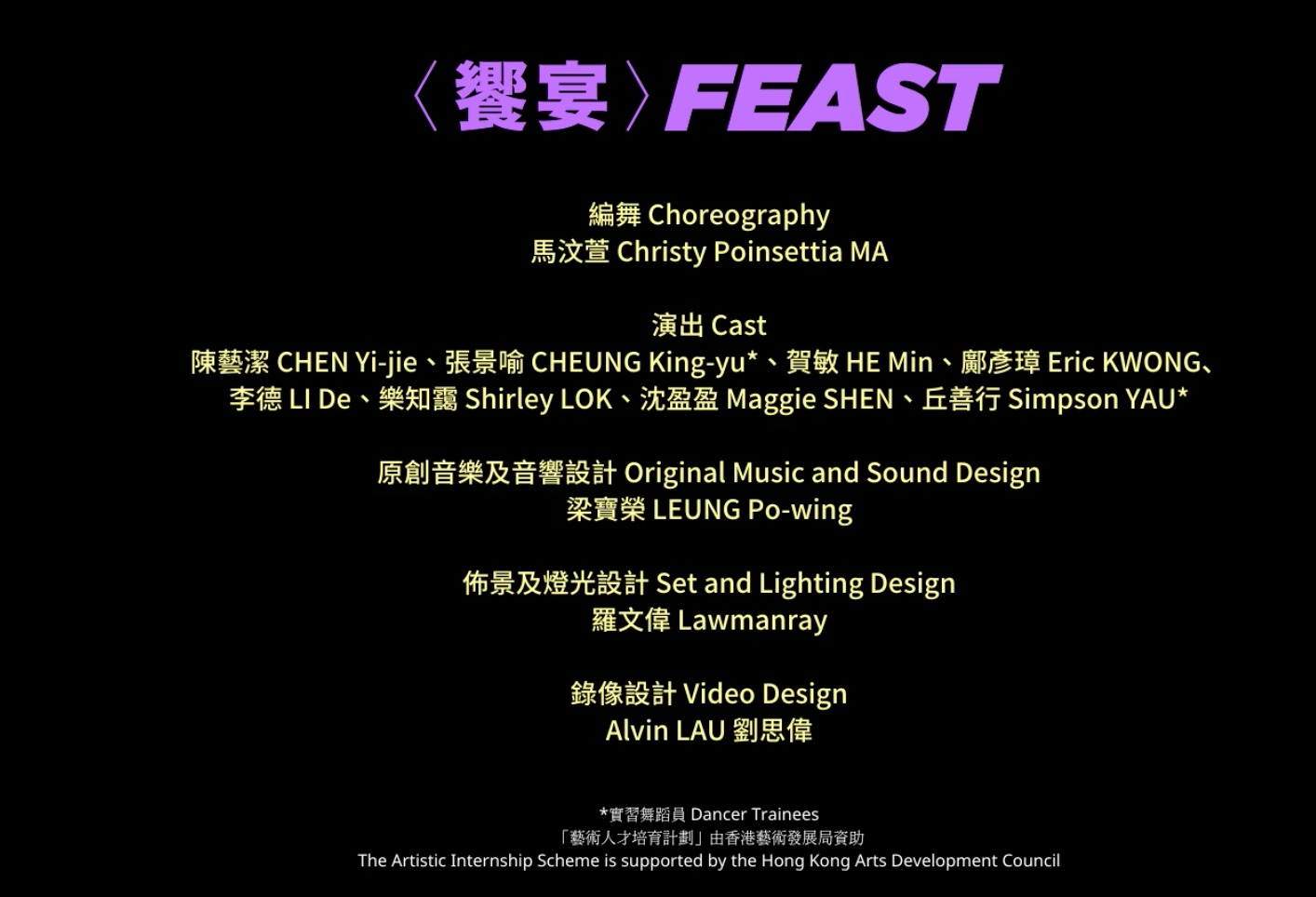 Christy Poinsettia Ma opened the evening with FEAST, a theatre-dance hybrid piece exploring the flaws of consumerism today. Inspired by her observations of the world and the things happening around her, leading Christy to think about the world as an ‘absurd buffet’ where both odd and reasonable things happen, and we stop questioning how to make changes. The resulting work is a visual feast, much like the ‘absurd buffet’ she mentions, where there is often so much going on, that we feel overwhelmed by the cornucopia of ideas and images we have to focus on. 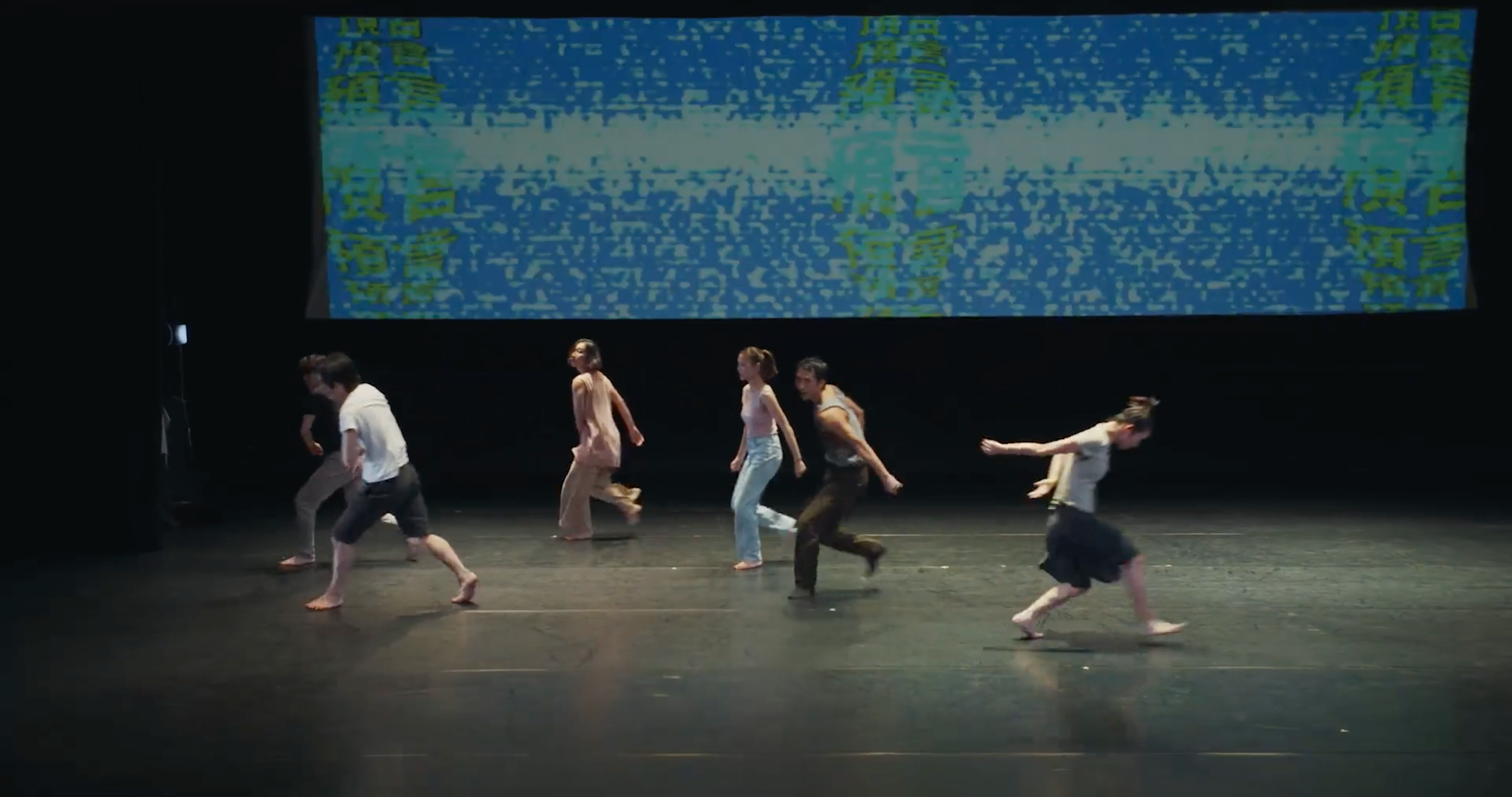 The piece opens with the dancers warming up together, synchronising their movements before transitioning into what appears to be a club scene. Indulgent and lost in the moment, here, the camera focuses on their lower bodies and legs, while they deliver non-sequitur lines of speech, adding to the deliberately confusing nature of the work. 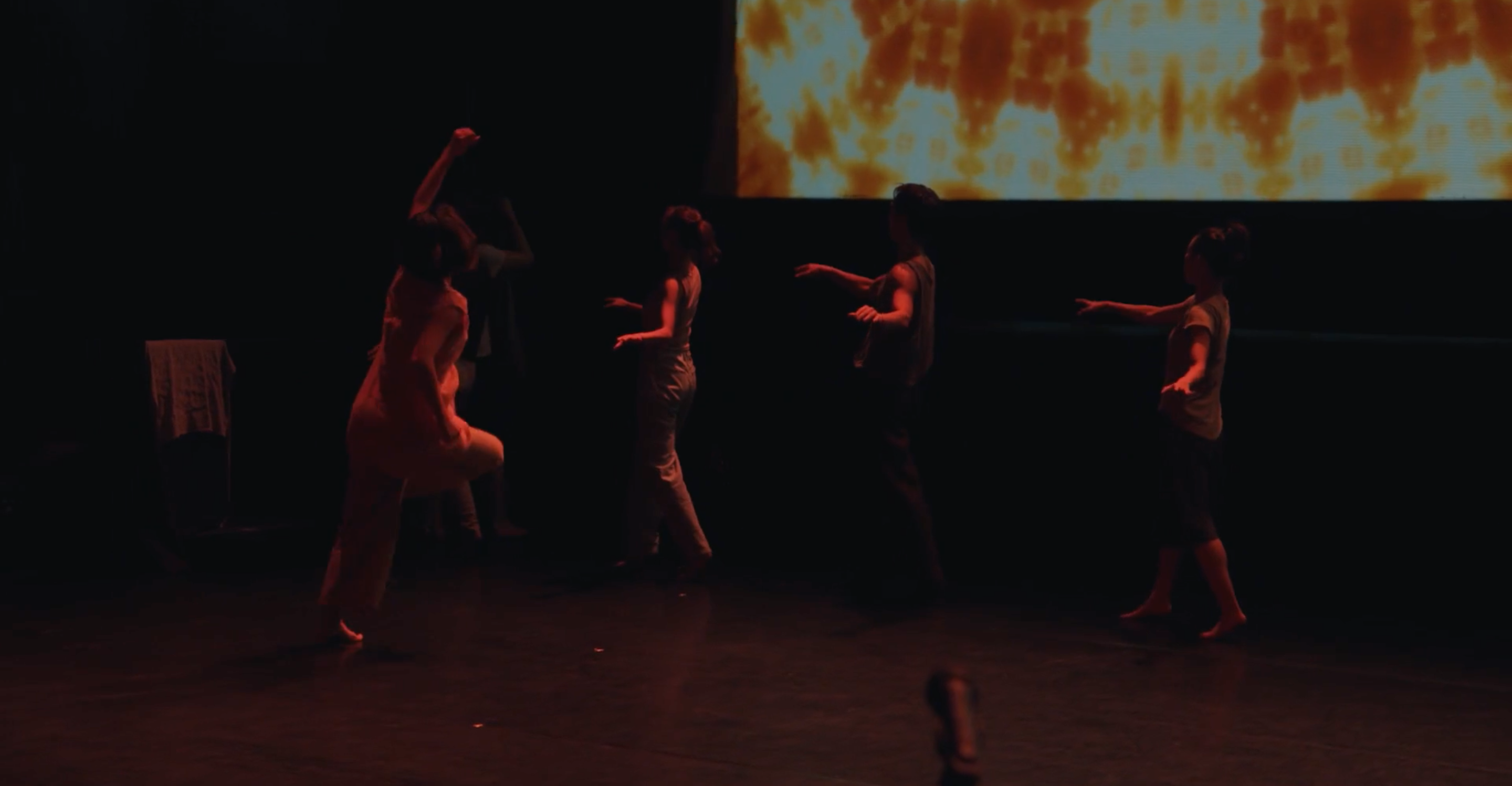 Christy also employs the use of projection, using an uncanny montage of images to emphasise the message behind the choreography, such as how a video of food being churned and blended is mirrored by the dancers onstage, spinning wildly to represent chaos. There were times we could not see what was happening on the screen, making it occasionally hard to see the link between video and choreography. 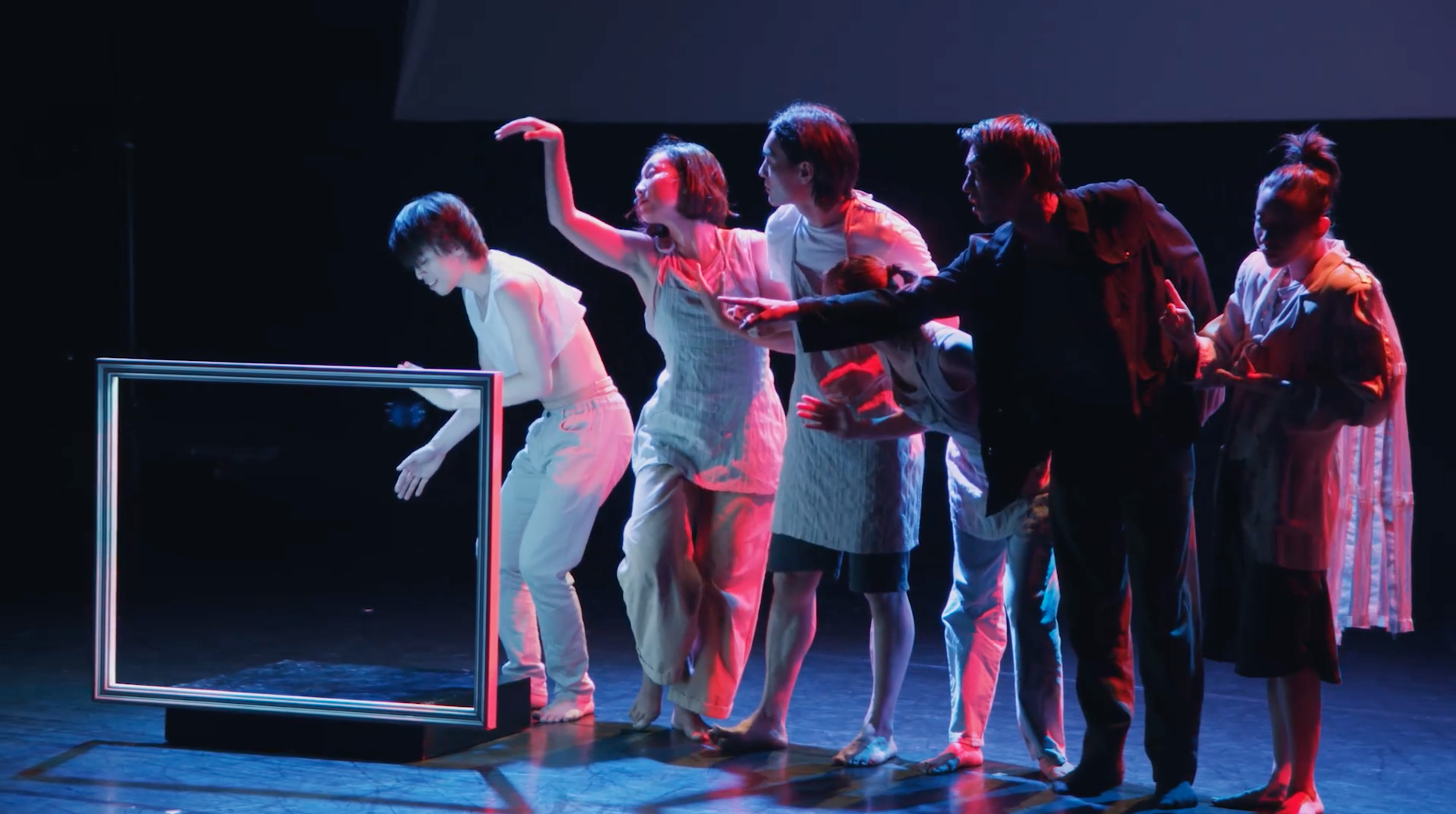 Now as a picture frame is rolled from one end of the stage to the other, with the dancers taking turns to occupy the space in the frame, as if signifying how we are becoming obsessed with being framed up and admired, like in a museum. All but one of them strip down to skin-tone outfits, with only Li De left in a smart black shirt, as if the others are lower beings compared to him. Onscreen, we see images of animals consuming food, while Li De does the same, picking ‘food’ from the ground to consume it, showcasing how we are still mere animals inside, regardless of how sophisticated we may seem. 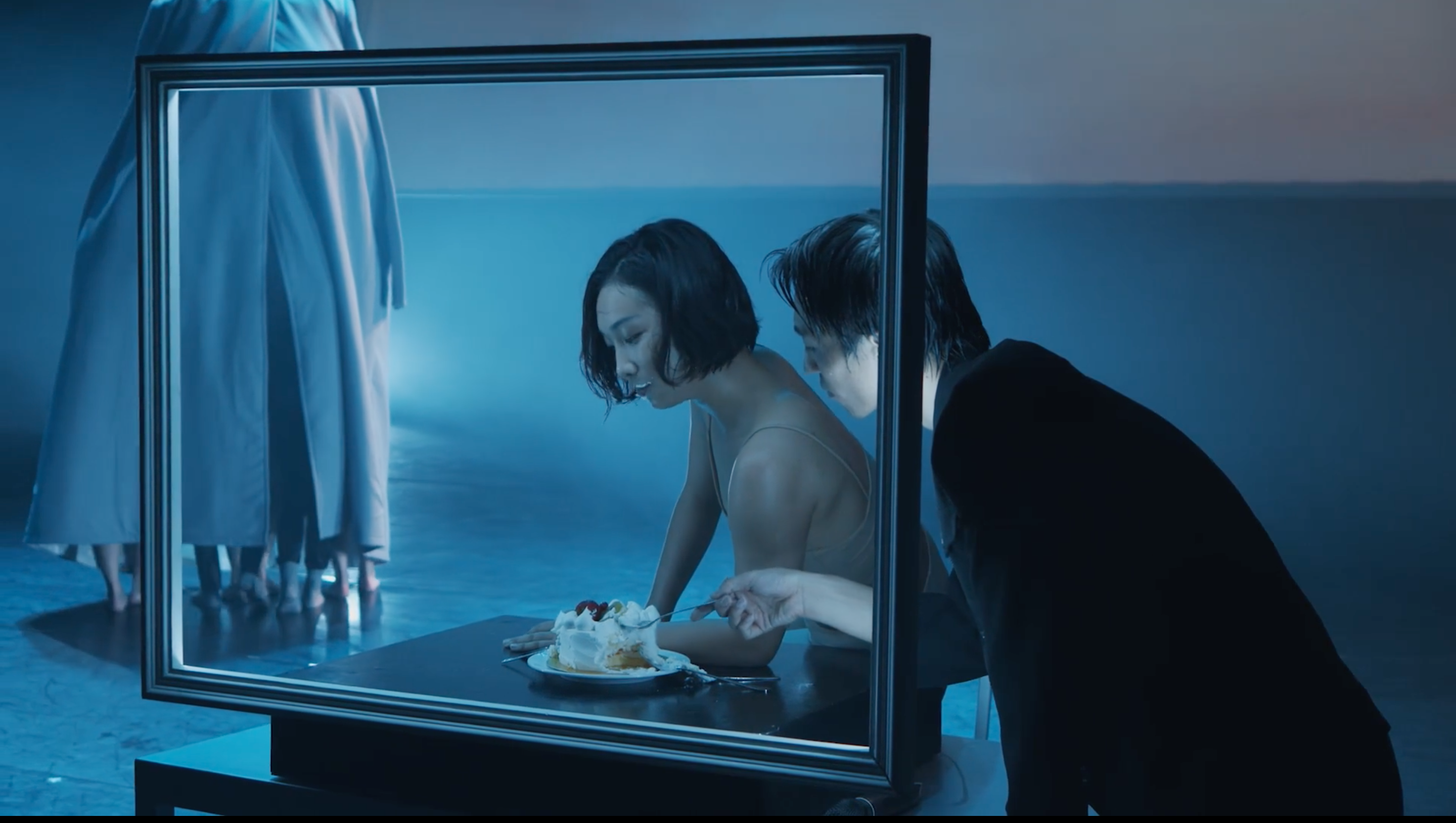 As Li De settles down at the table, he produces a handkerchief and wipes his sweat before his meal is wheeled over to him, served in a pure white plate. While consuming it, the dancers behind him mime cutting themselves, like animals killed in a slaughterhouse, and representing the invisible cruelty going into our food. Chen Yi-jie then sidles up to the table, and begins to eat cake, voraciously and without hesitation, as the others feed her, consuming without thinking of the consequences or source of the food. 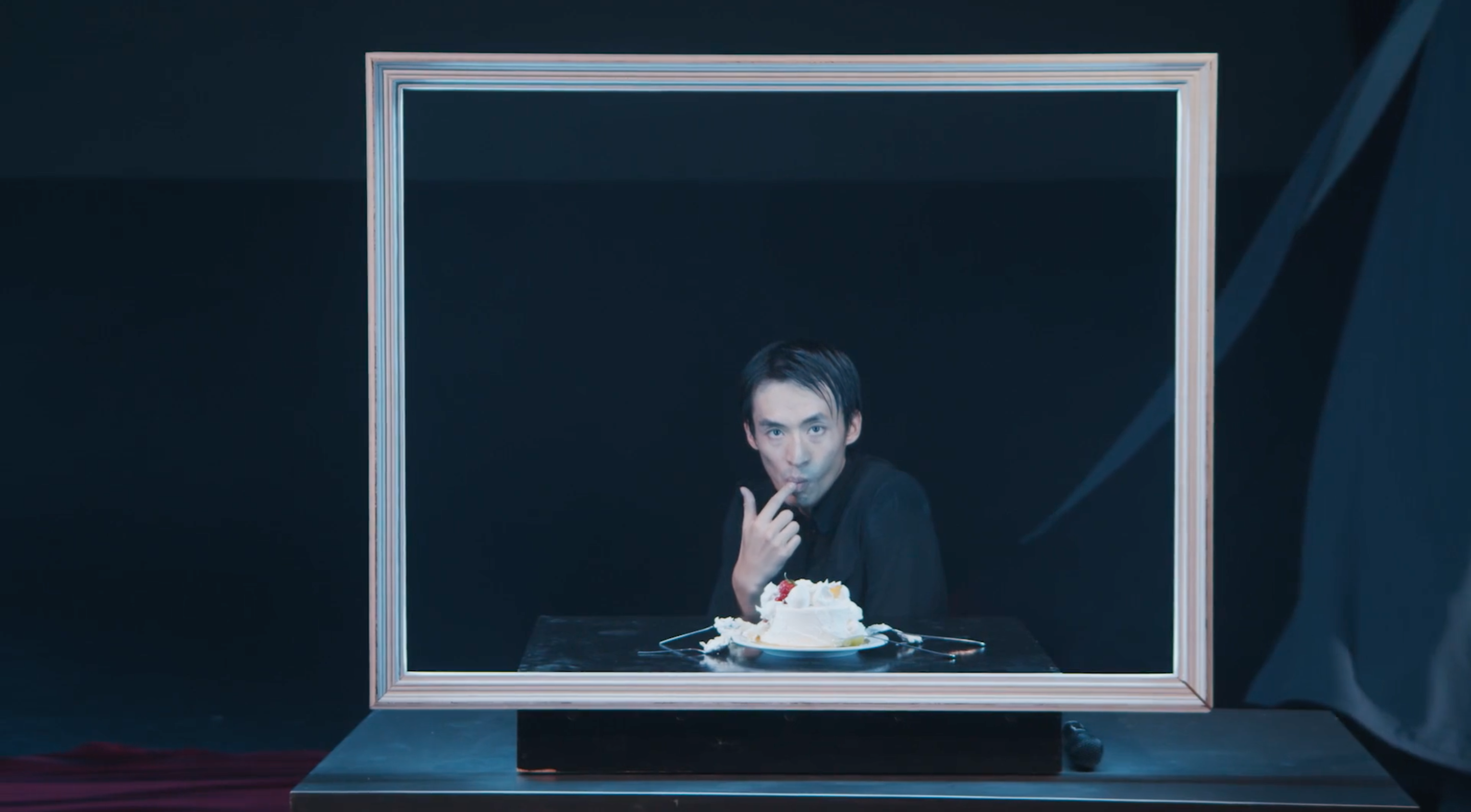 Perhaps most frightening of all, a grotesquely large, limbless torso silently approaches the dancers. The dancers willingly enter the figure, who seems to consume them whole, before they are ejected behind it, marked by a red cape resembling a trail of blood. As the piece ends with Li De in the frame, we watch him indulging in what remains of the cake while looking directly at the camera, as if sinisterly aware of all that is going on, yet continuing to eat as the stage fades to black. FEAST then leaves us thinking about issues of mindless consumerism, and our own wilful ignorance to the corrupt practices and habits that go into our pleasure today. 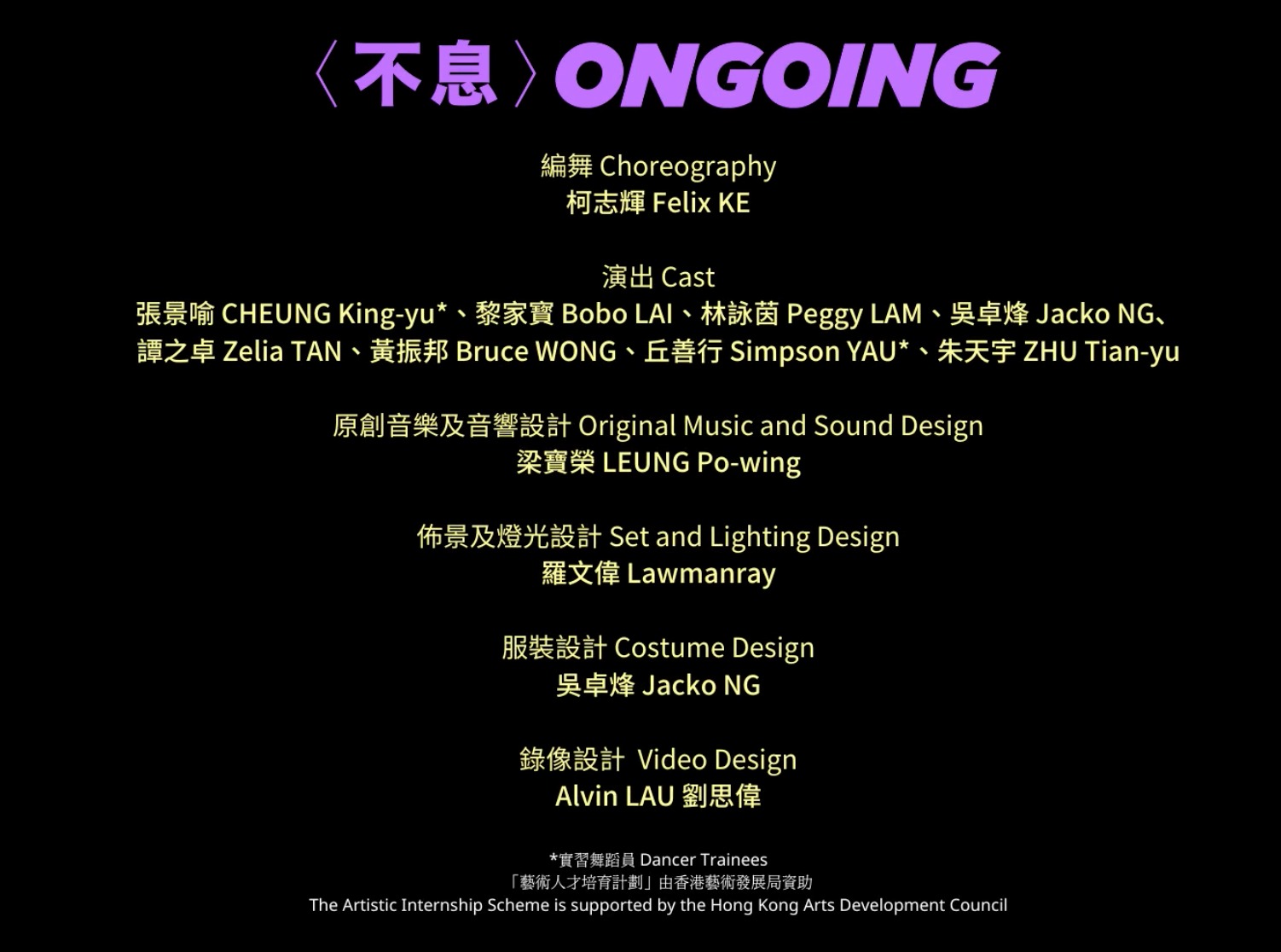 In Felix Ke’s ONGOING, he reflects on the chaos that has swept Hong Kong over the last year, using it as the inspiration for which to consider issues of barbarism and hope. While he does admit that he was unused to the process of filming, Felix also took the effort to think about the right camera angles and presentation to overcome the constraints, with the resulting film displaying the strength of his vision and the work he has put in to figuring out the medium, alongside the good work of the filming team and film director Rita Hui. Clever use of close-up shots, for example, make it feel as if the dancers are directly addressing us, engaging and immersing us despite being separated by a screen. 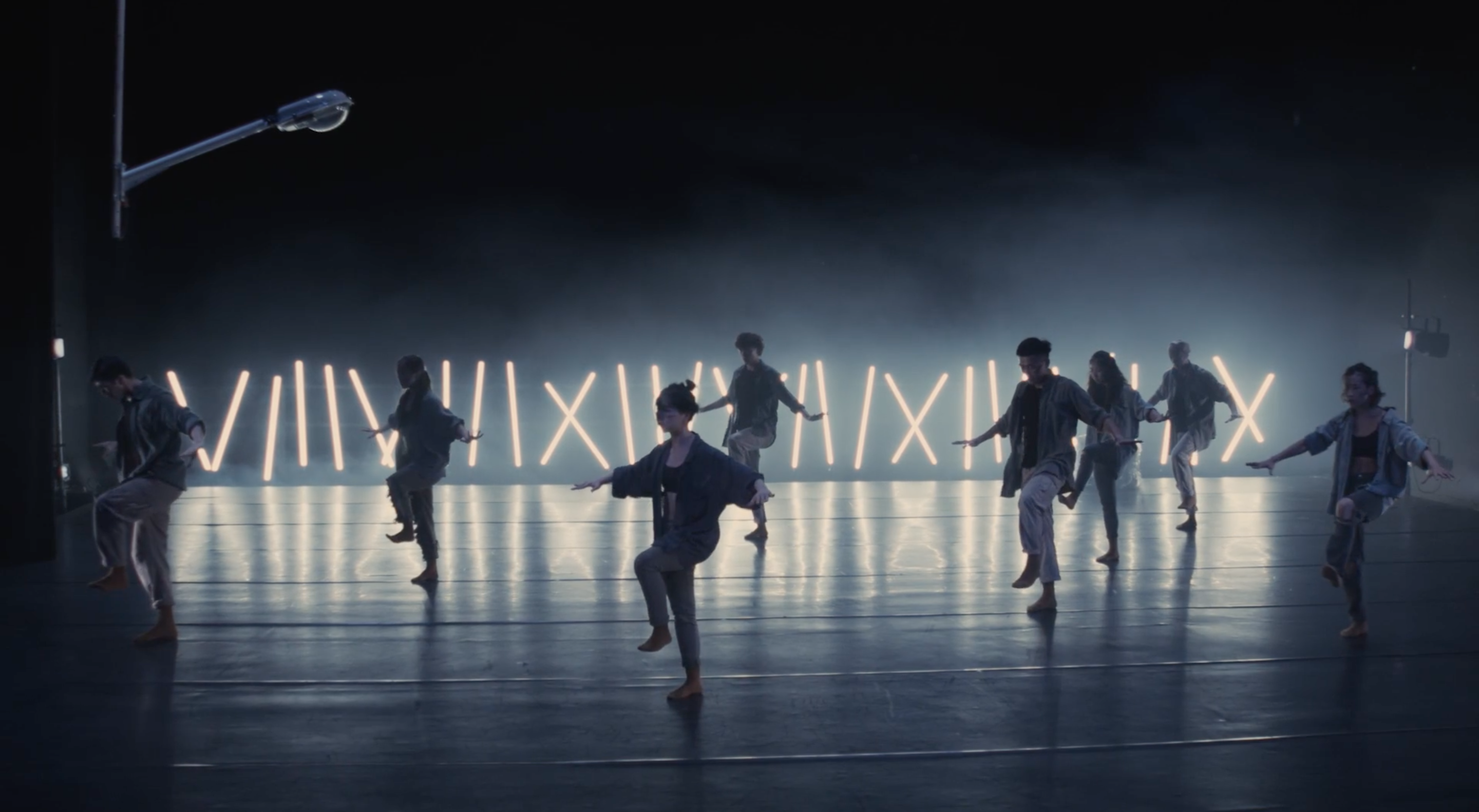 ONGOING opens in darkness, before slowly revealing the dancers in dim lighting, with a television screen behind them flickering with static. We see them dressed in streetwear, while a street lamp hangs overhead, and we recognise that this piece is set on the streets of Hong Kong. 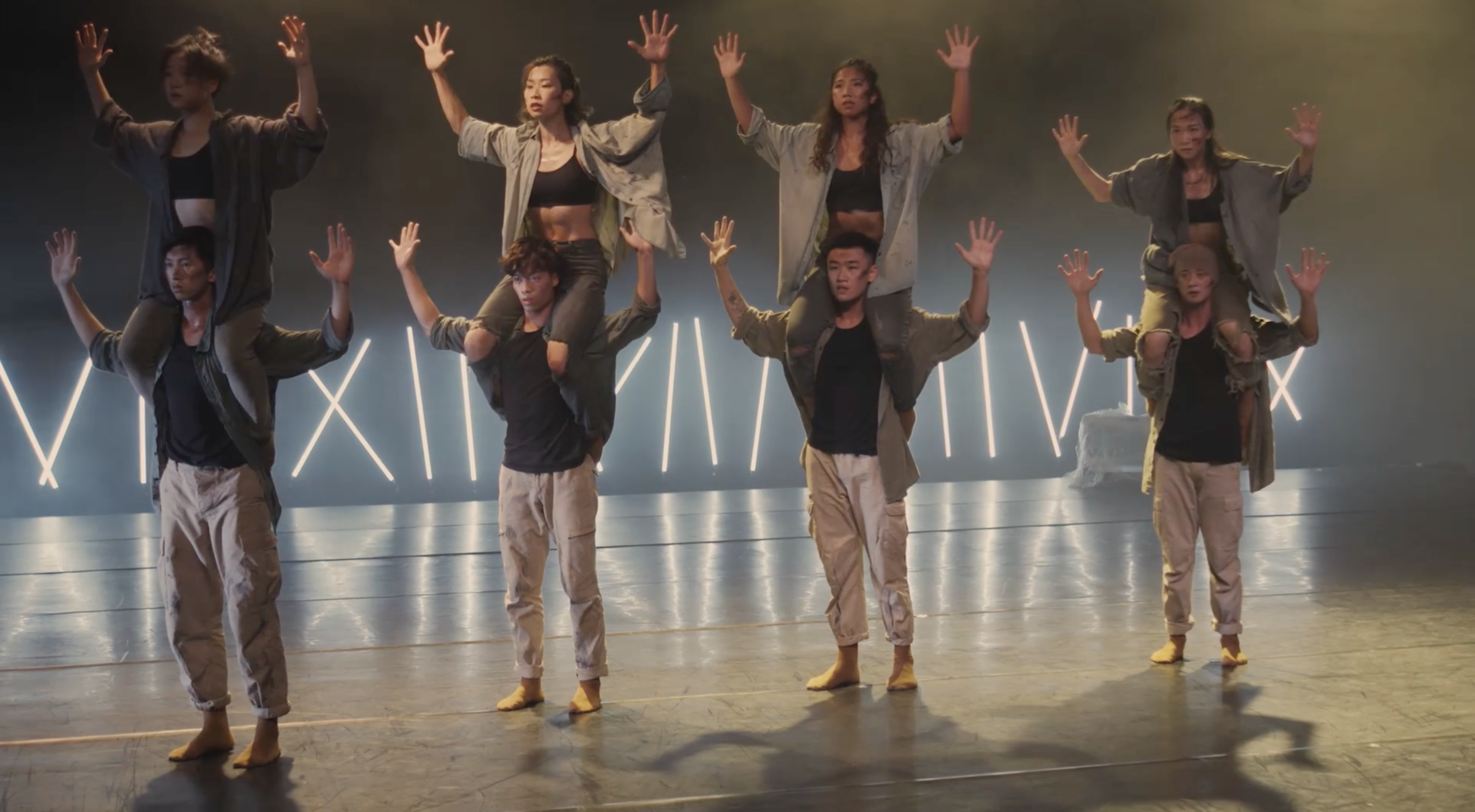 As they come together, expressing their frustration and exhaustion in unison, we imagine that the dancers have been protesting for some time now, their faces smeared with dirt and weariness, while sweat drips down their faces. They’re determined, yet cautious, as they continue to keep a lookout around them, afraid of being caught. Just as they seem they’re about to give up, Bruce Wong steps towards a loudhailer, and begins to sing”美麗新香港”. Upon hearing this, the group seems to gain strength, now imbued with more energy to keep up the good fight. 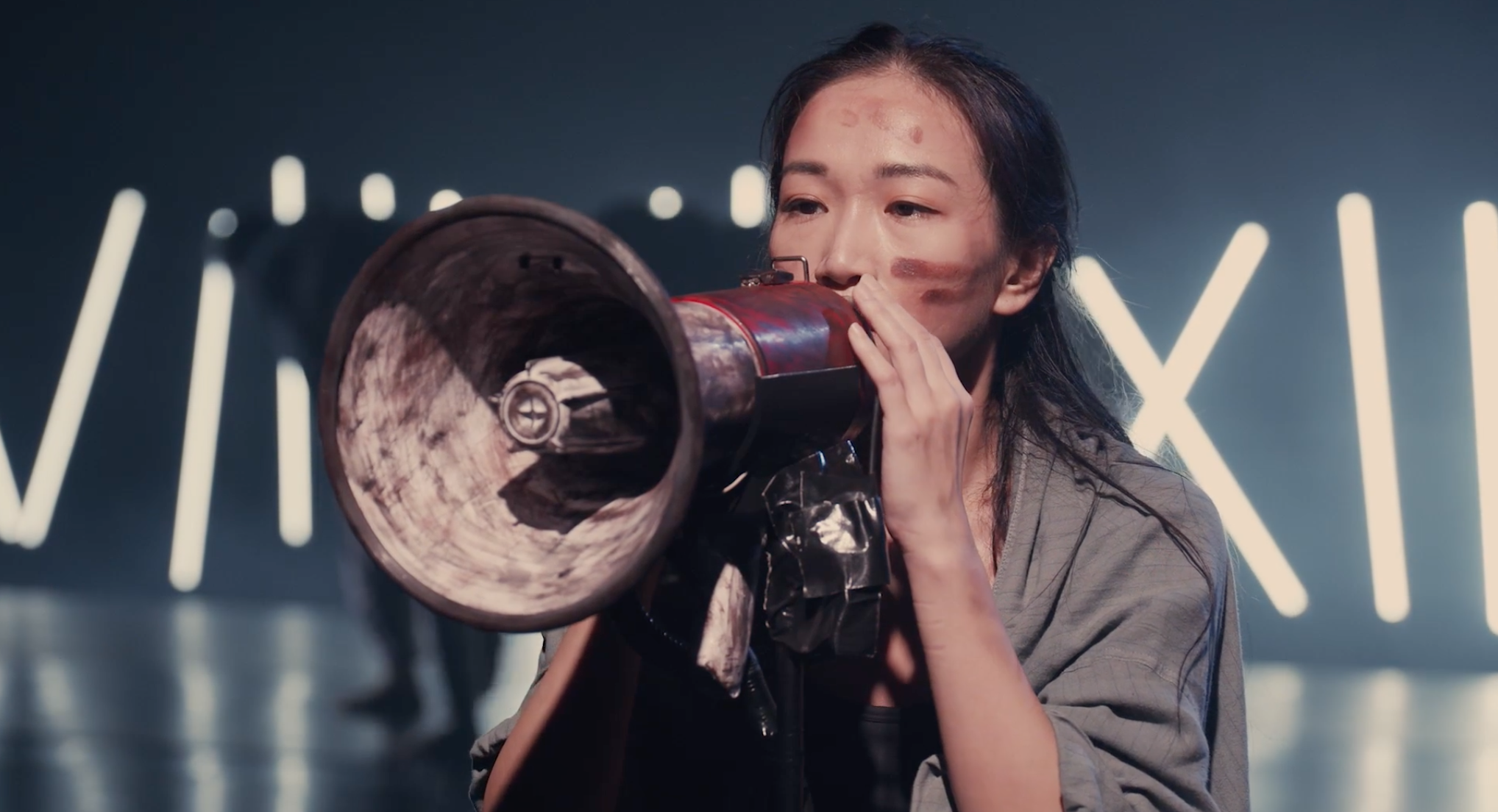 The ominous music returns, while a series of fluorescent lights behind them glow bright, almost as if they formed a barrier of light, while a smoke machine adds a little fog and uncertainty to the atmosphere. Now weary, they seem to be wondering to themselves where to go now, their movements showing restraint and resistance, reminding us of the arrests and struggles the protesters have faced. Bobo Lai now steps up to the loudhailer, speaking clearly, confidently, and encouraging them to press on, showing how much the younger generation need a voice and want to be heard. 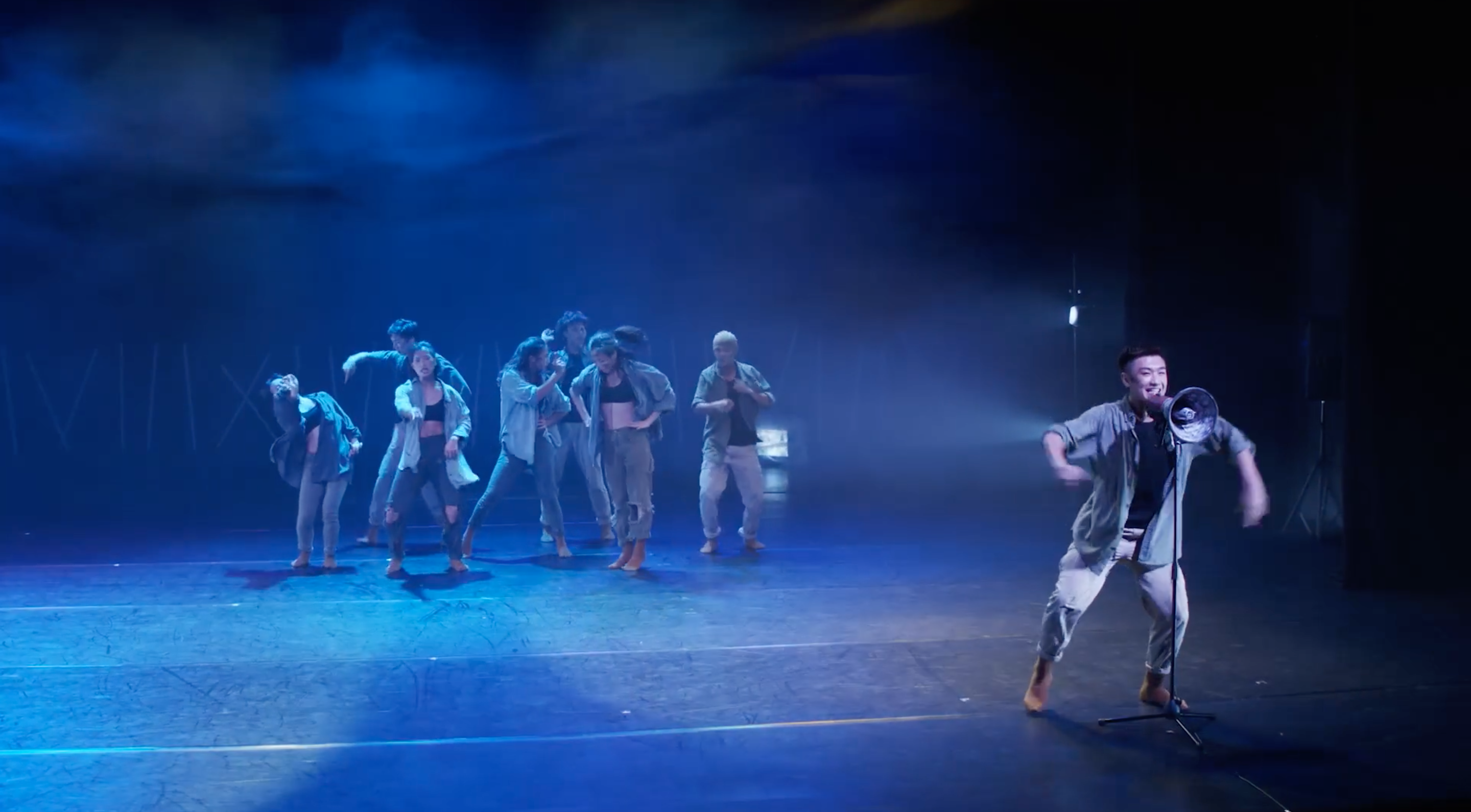 We hear a siren wailing in the distance, and there is fear in their hearts, knowing how long and hard the road ahead is, the darkness encroaching onto them as they huddle together, the only light left projecting directly onto them, fragmenting them like the static on the television. We now hear the same song from before, only jazzed up and played at an increased BPM now, sounding far cheerier than before. It no longer sounds like how it was previously, masked by its cheery tone and energy. The scene feels almost surreal as for the first time, the dancers put on a smile, as if forcing themselves to forget about the current situation. Only Jacko Ng remains at the loudhailer, his off-key singing almost a shout, as if desperate to remind the others what they are fighting for. 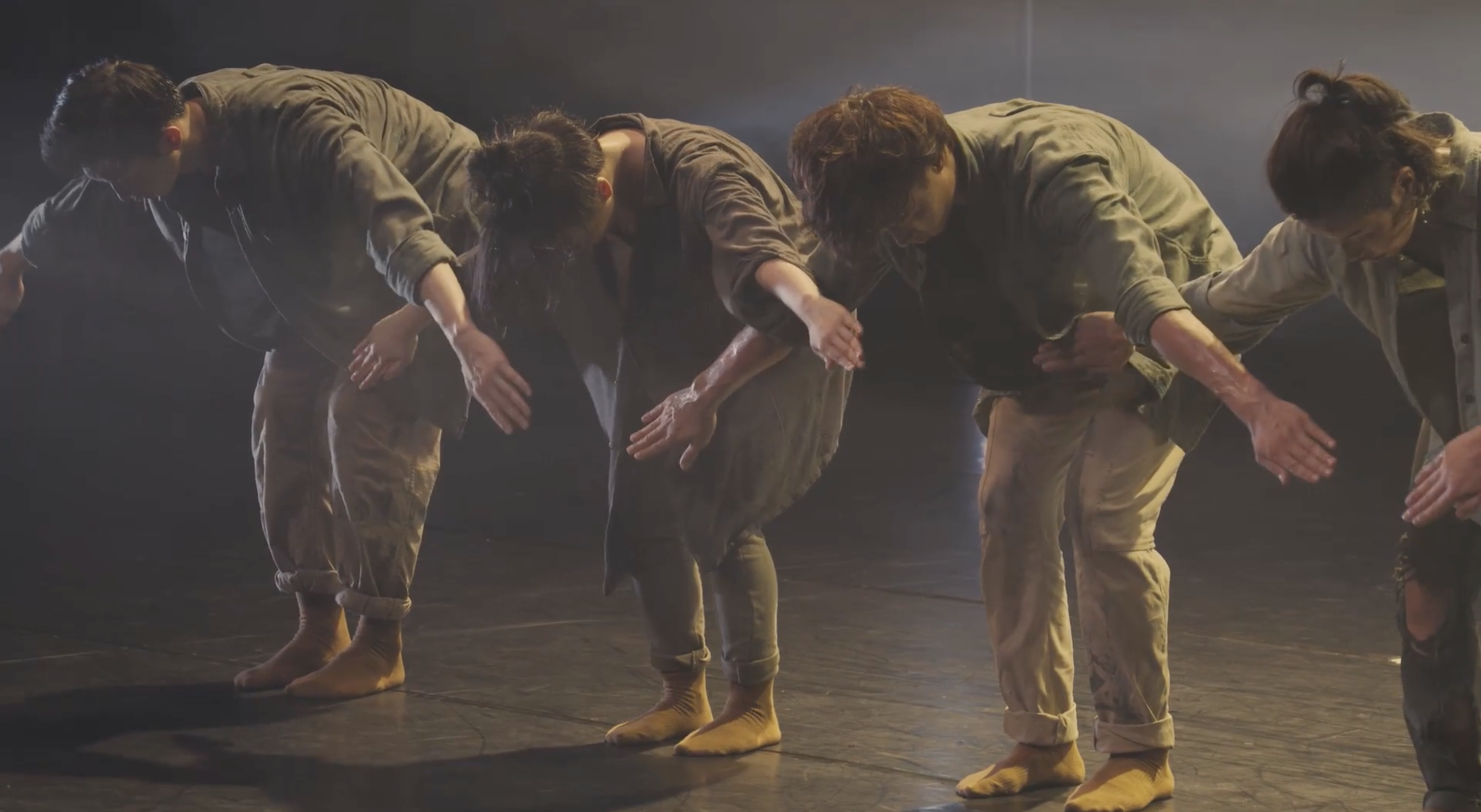 As the music gives way to the dark mood from before, the dancers continue to protest, knocked down over and over again, yet always getting up. Eventually, everyone has fallen down, leaving only one protester still standing, the streetlight shining down on her as she hops on one foot, unwilling to give up. Despite us being so distant and removed from the actual protests, ONGOING evokes sympathy and admiration for the protesters, allowing us to understand how difficult it’s been for them to keep up the fight for freedom all this time. It is only because they continue to hold on to their shared beliefs that they have the unwavering energy to fight on. As we zoom in to the static on the television, we are left to wonder when the future will become clear once again, and when the ongoing chaos will finally come to an end. 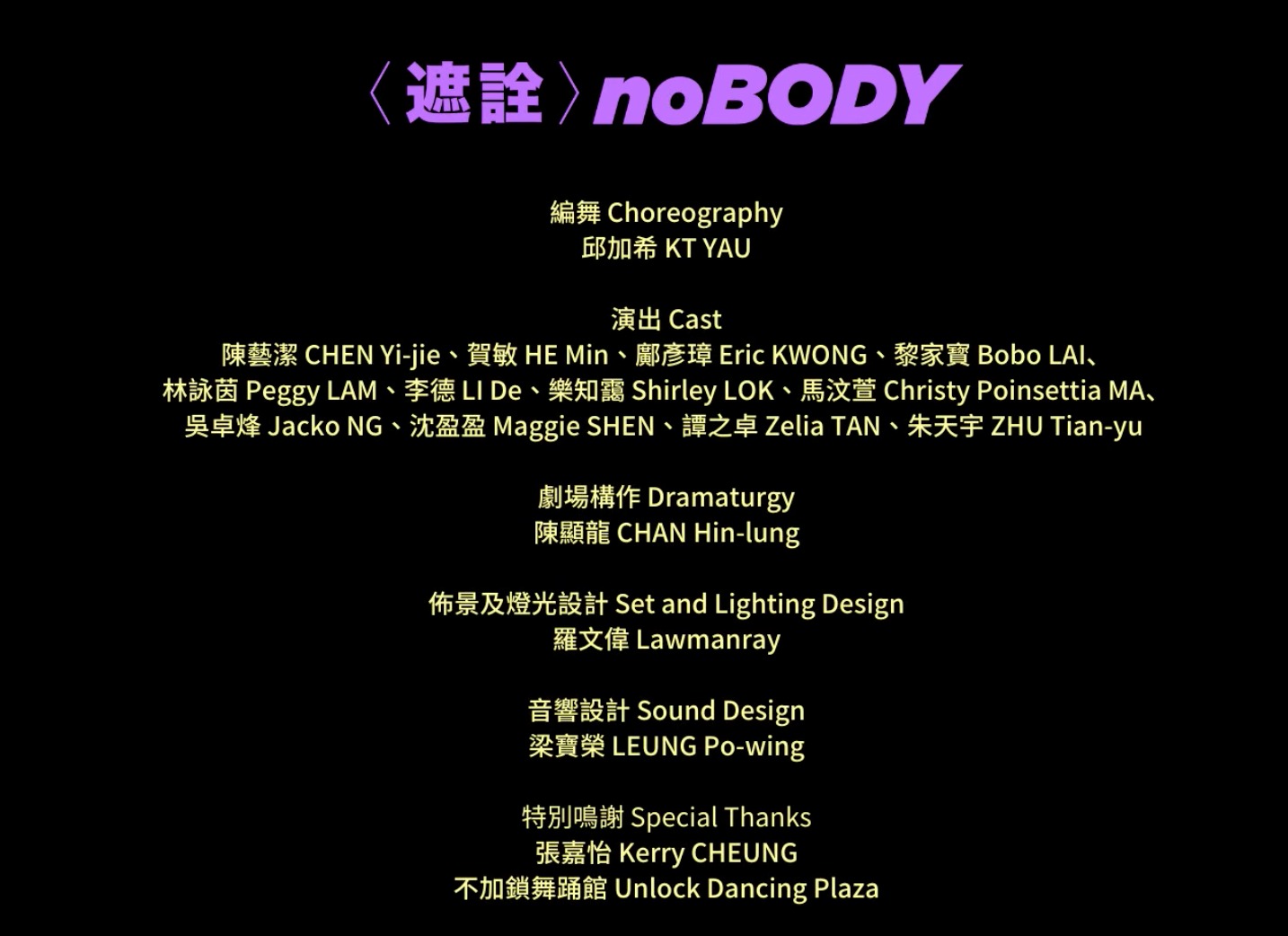 Project NEXT Wave concludes with KT Yau’s noBODY. Pondering over the significance of the individual dancer’s identity, noBODY questions how much an audience member recalls about an individual after the curtain falls. Speaking almost metaphorically in her prelude to the show, KT asks us three questions: ‘where are you right now’, ‘how long have you been in this place’, and ‘how is the air at your place’, and advises us to get comfortable for the almost hour-long piece. She suggests a possible seating position – sitting on our hands on a chair. Could it be that she is telling the audience that we are simply ‘sitting on our hands’, and not doing anything about a pre-existing problem? 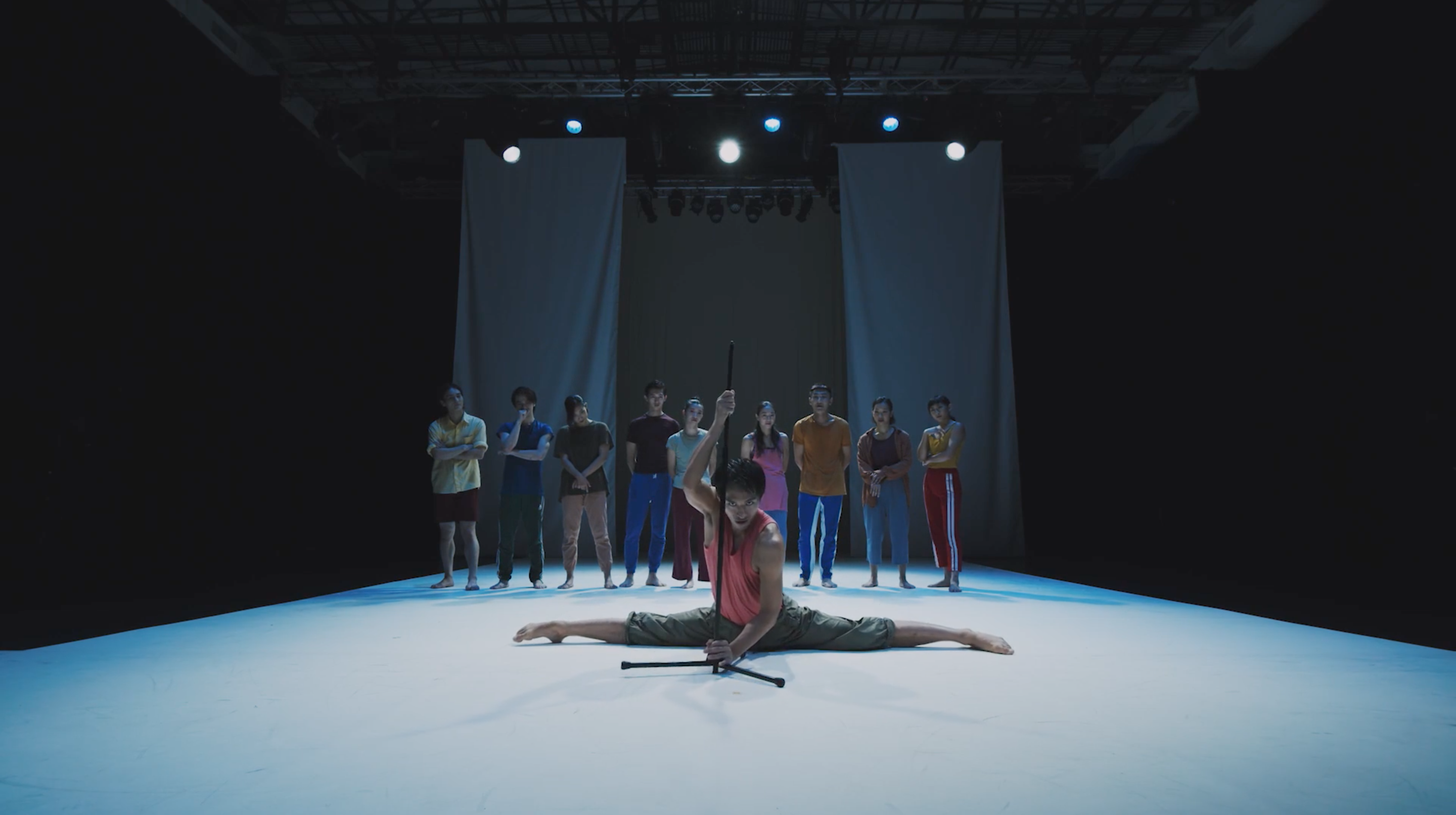 noBODY begins with the dancers onstage, each dressed in their own outfits, and taking turns to come to the mic and introduce themselves verbally, almost as if we are watching them audition. Light-hearted and relaxed, we get a sense of who they are and their personality, and as the camera pans out, we see the stage is set up almost like a runway, giving the dancers and opportunity to showcase their skills one by one, each one distinct from the other. 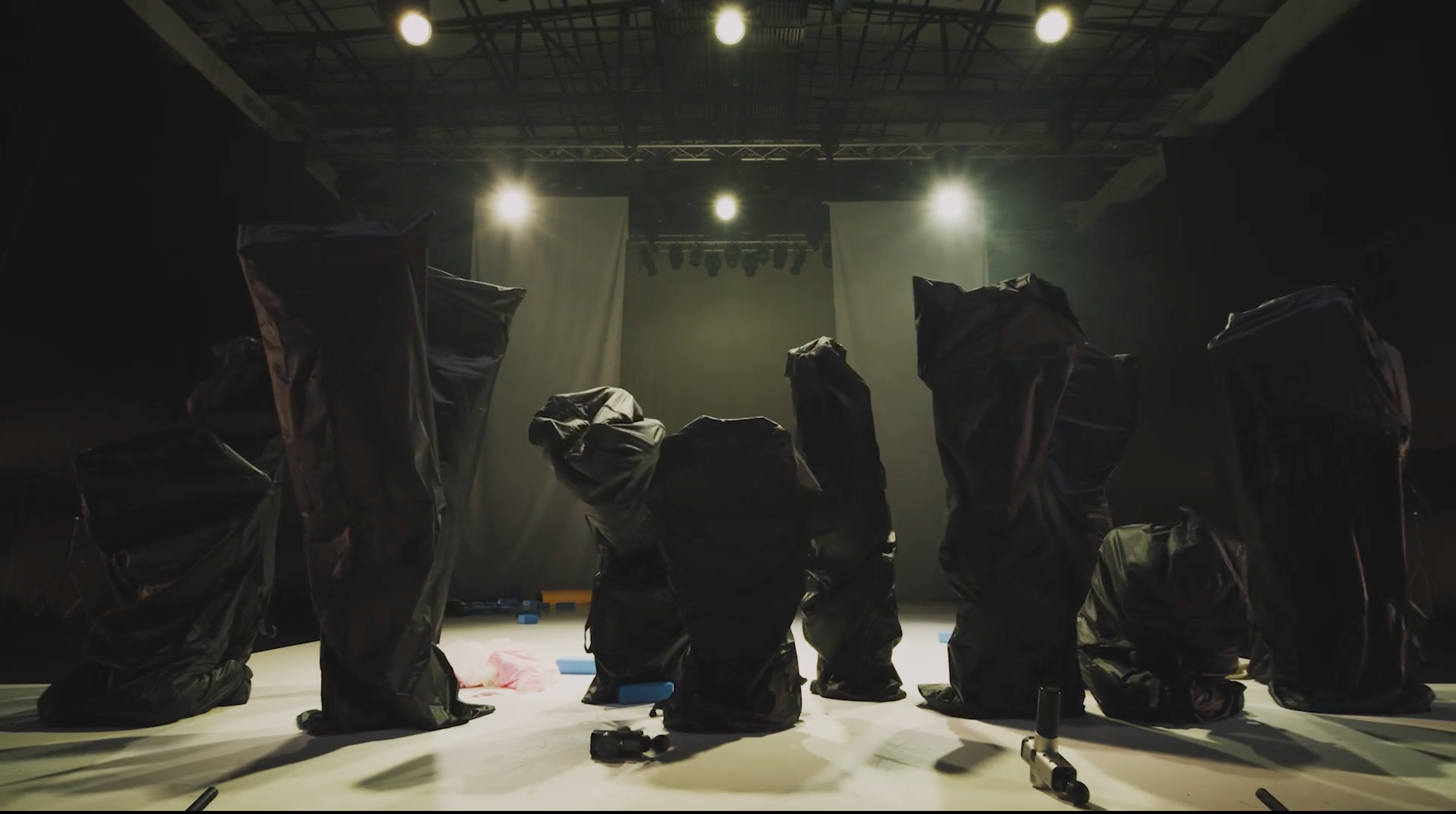 But just as we think we’ve gotten to know them, they head backstage and come out again donning black body bags, covering their entire body and making them indistinguishable from one another, making their previous speeches and demonstrations a futile effort at establishing their individual identities. There’s something disconcerting about the macabre image of body bags hopping about the stage and dancing, while soaring, grandeur classical music plays in the background, making the scene look almost like a bizarre ballet. We wonder if these ‘dead bodies’ are responding to the music, struggling to come back to life even after death. 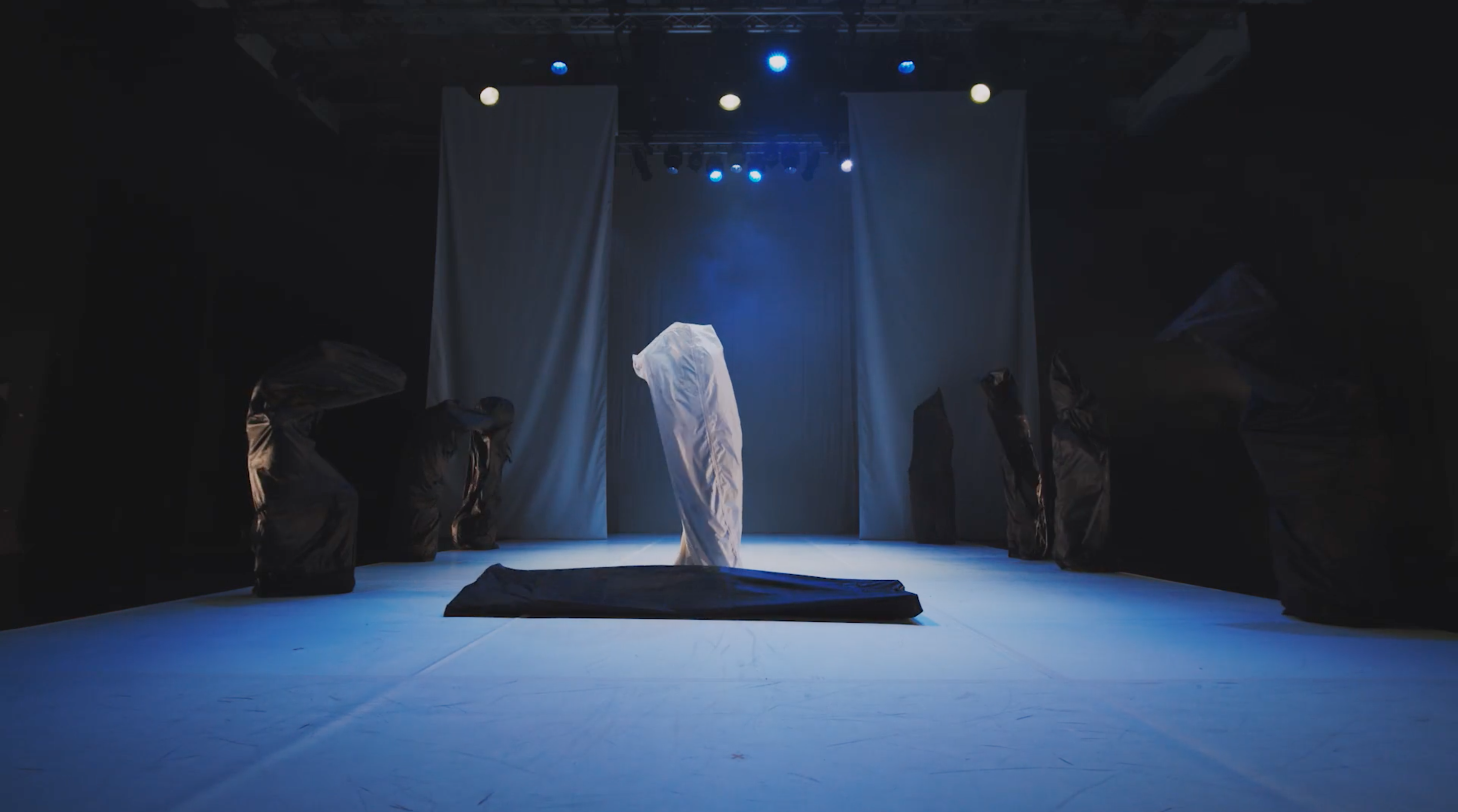 Even when one of the dancers appears in a white body bag, it’s almost comical how they begin to remove it, only to reveal that they are dressed in another black body bag inside, raising the question of just how difficult it is to stand out in a crowd. Hopping around, their limbs reduced to mere protrusions from each bag, one is unsure whether to laugh or to admire how much effort it takes from the dancers to navigate the space and still perform well with these unusual bodies they now have, thinking of the sheer amount of control and practice it takes to maintain one’s breathing and energy while stuck in a restrictive body bag. 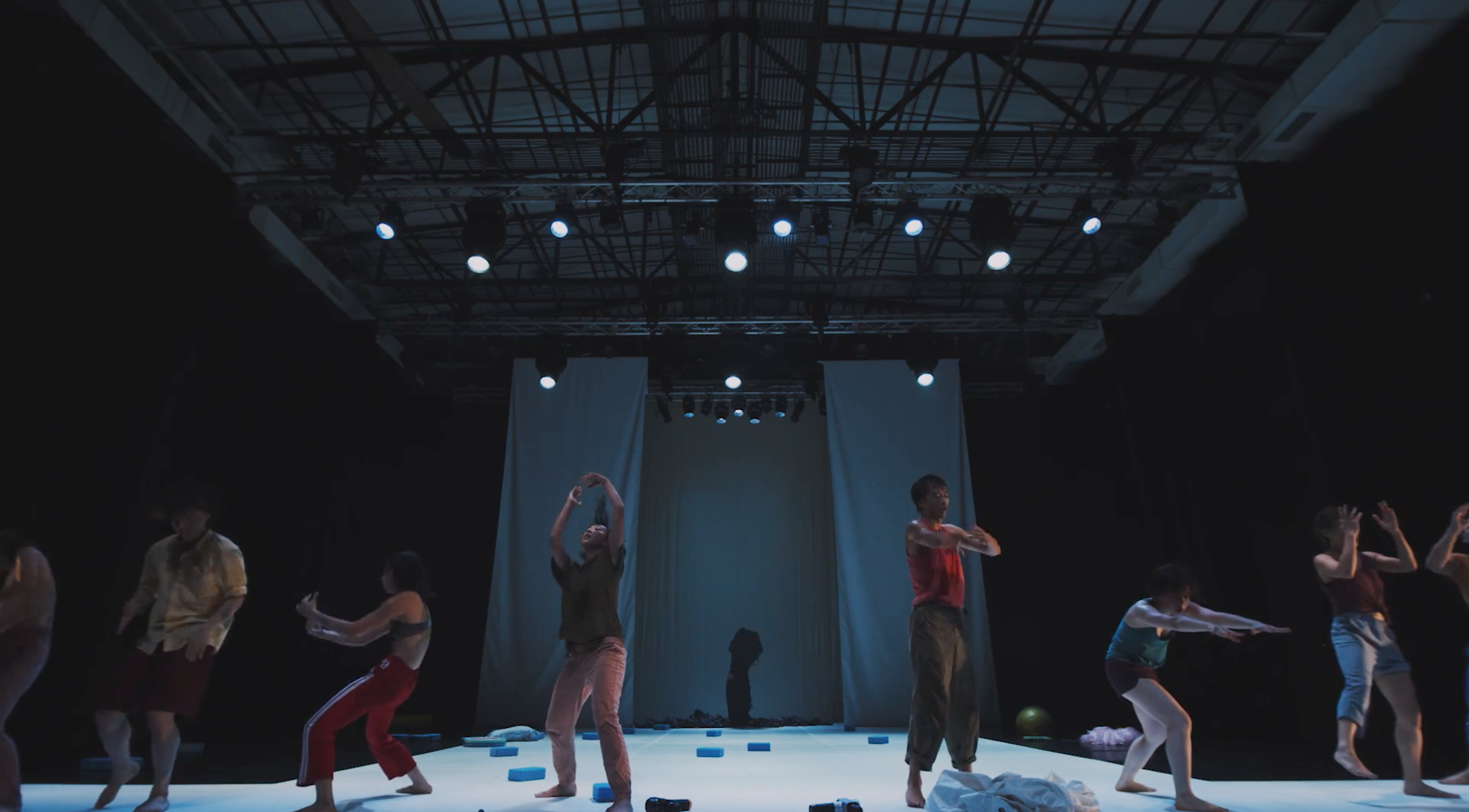 The dancers then begin throwing items out of their bodybags around the stage, as if getting rid of their own personal baggage and uncertainties, before they themselves get out not only of their bodybags but also their comfort zones to reveal their true selves once again, if only for a moment. Choral music fills the stage while they get back in the bags, as if resigning themselves to their fates, a phalanx of mystery bodies rather than a solo star. 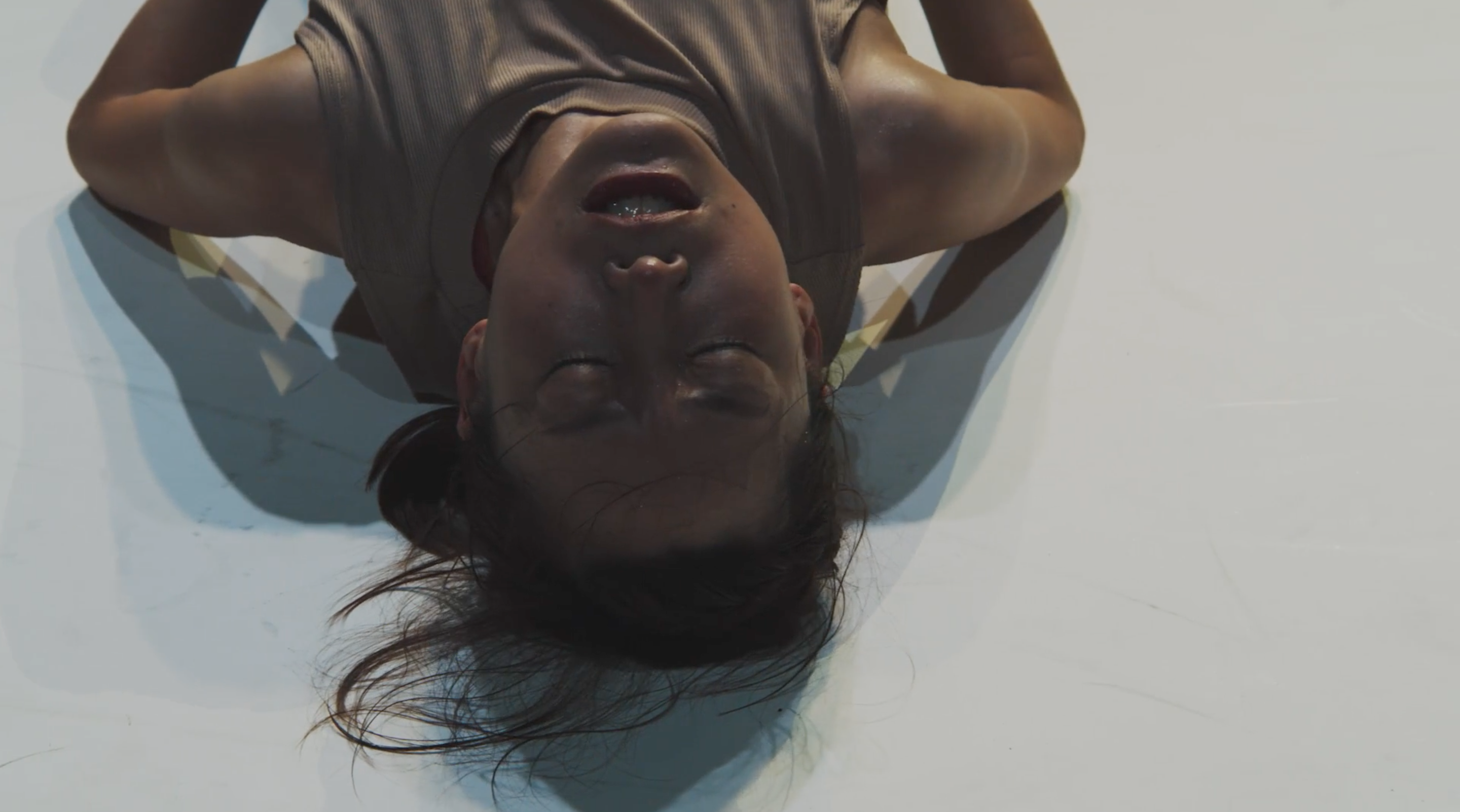 As if rebelling against this fate, they go backstage and come out again without the bags. While they appear to be dancing together in synchronised movements, each of them are performing their own unique, repetitive moves over and over again, still trying their best to stand out from the others. As their movements become more frenzied and strenuous, sweat dripping from their bodies, we hear a ticking in the background, as if counting down. A bell rings, and they fall to the floor, tired, yet controlling their breathing and stopping themselves from panting. As an audience member, we feel almost guilty with how relaxed we are, sitting comfortably at home compared to how exhausted they look. They have given all they can, and wait with bated breath for how the audience responds. In the empty theatre, there is no audience, as they stand up, take a bow, and hope that their hard work pays off, leaving us to think about the unseen labour that goes into every performance, and how little recognition they have once we leave the theatre, yet persevering on in the name of art.

With Project NEXT Wave, CCDC has produced a thought-provoking triptych of work showcasing the rich imagination, talent and awareness of these promising young choreographers, addressing the pressing societal, artistic and philosophical issues of today. An immense effort from all the dancers involved, the images and moments from each piece still etched in our minds.