Zoom becomes an unlikely medium for hope and solace in this timely, reflective comedy-drama.

While we’ve watched a number of performances on Zoom already, no play has tackled the medium quite as directly as Pangdemonium has, with their production of Marc Palmieri’s Waiting For The Host. Conceived when he participated in a recording of a Passion Play for his local church, Palmieri’s script is one of the first new plays this year that was written specifically to be performed on everyone’s favourite online conferencing platform. 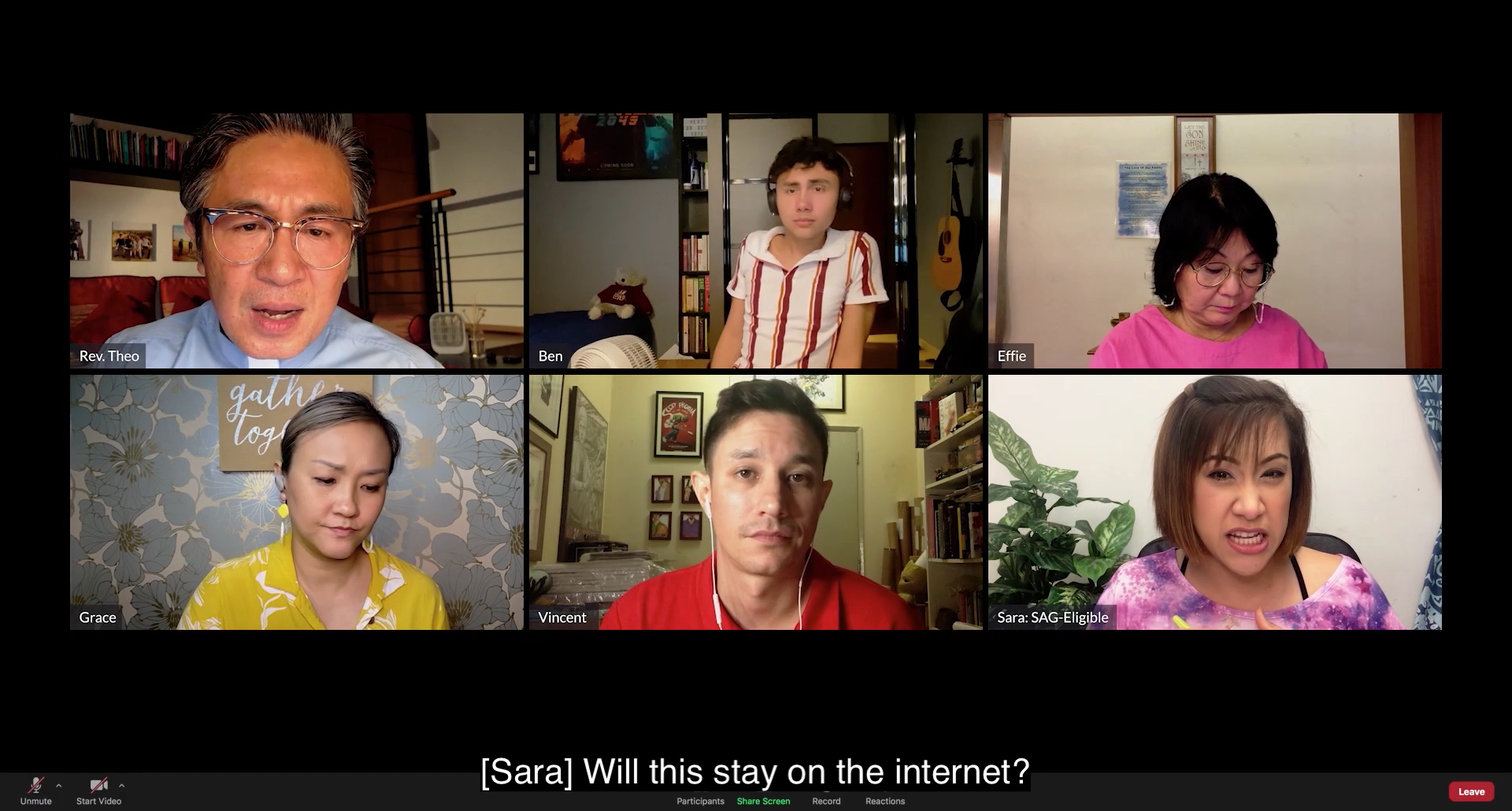 Directed by Tracie Pang, the comedy-drama follows a group of churchgoers as they attempt to stage a reading of the Passion Play during Lent – virtually, that is. Led by Reverend Theo (Adrian Pang), we’re quickly introduced to the motley crew of would-be theatremakers as they join the room: the reverend’s literary, university-going son Ben (Zachary Pang), all-around nice guy Vincent (Gavin Yap), his Screen Actors Guild-eligible ex-girlfriend Sara (Mina Kaye), ditzy but lovable auntie Effie (Neo Swee Lin), and enthusiastic ray of sunshine Grace (Petrina Kow). What follows is an immensely true-to-life, if slightly exaggerated, attempt at recording the reading, only to have the cast constantly interrupting with their running commentary, underlying tensions, and of course, the ever-present threat of COVID-19 hanging over them. 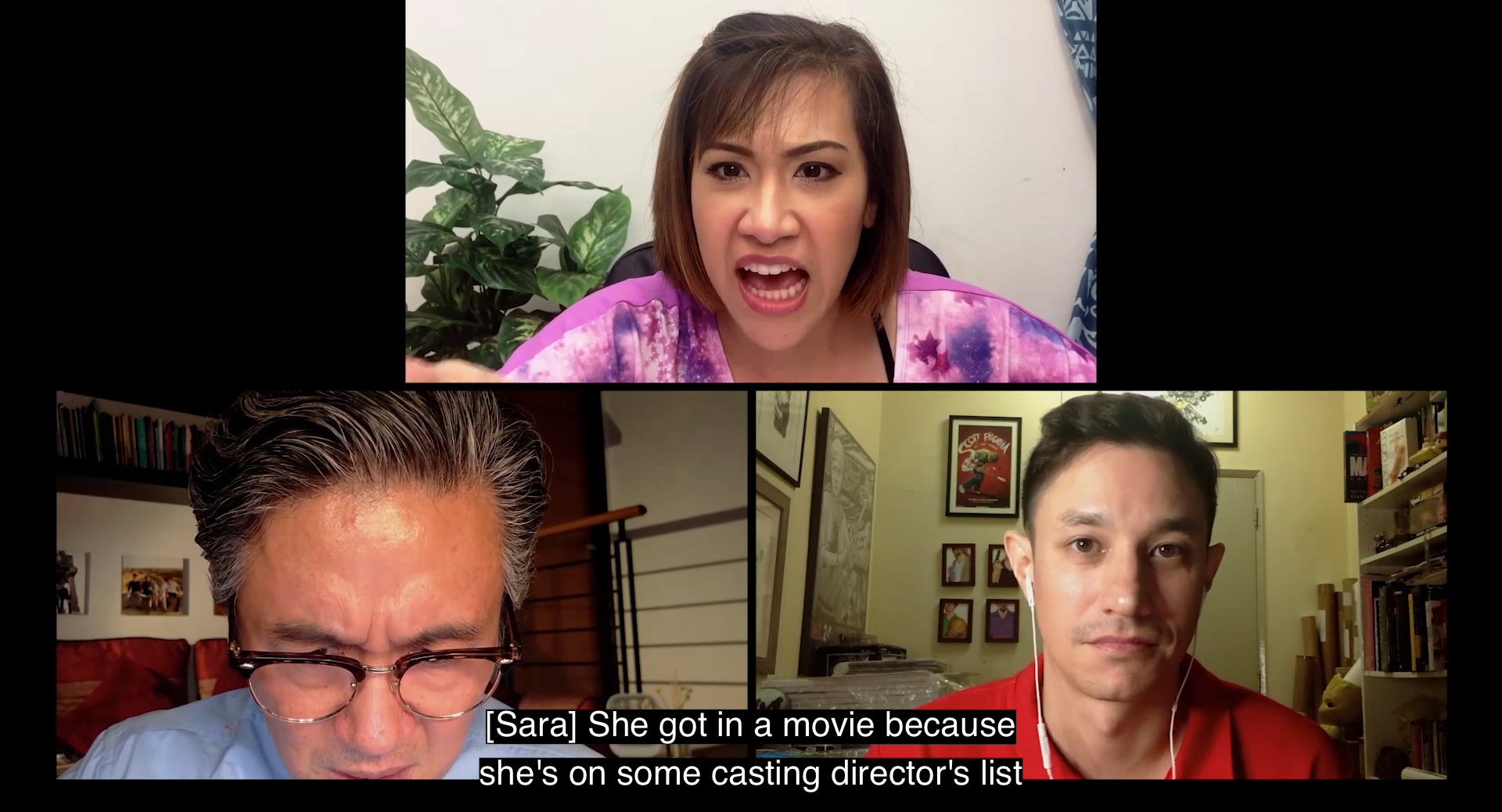 Unlike most Zoom performances, Pangdemonium chose to pre-record this production, rather than perform it live. This allowed them to circumvent the usual technical hiccups such as mid-show disconnections or wonky cameras, a move that pays off with a clean, stable stream edited by Genevieve Peck, enhanced with music by Joel Nah and sound by Jing Ng. Beyond the production value, Waiting For The Host also works because of the strong scriptwriting. Not only does Palmieri effectively meld the meta elements of the play; he allows for plenty of lowbrow humour and situational comedy in-between as well, giving the show a good ebb and flow that keeps us laughing throughout, before managing to hit us in the feels towards the end of each act. 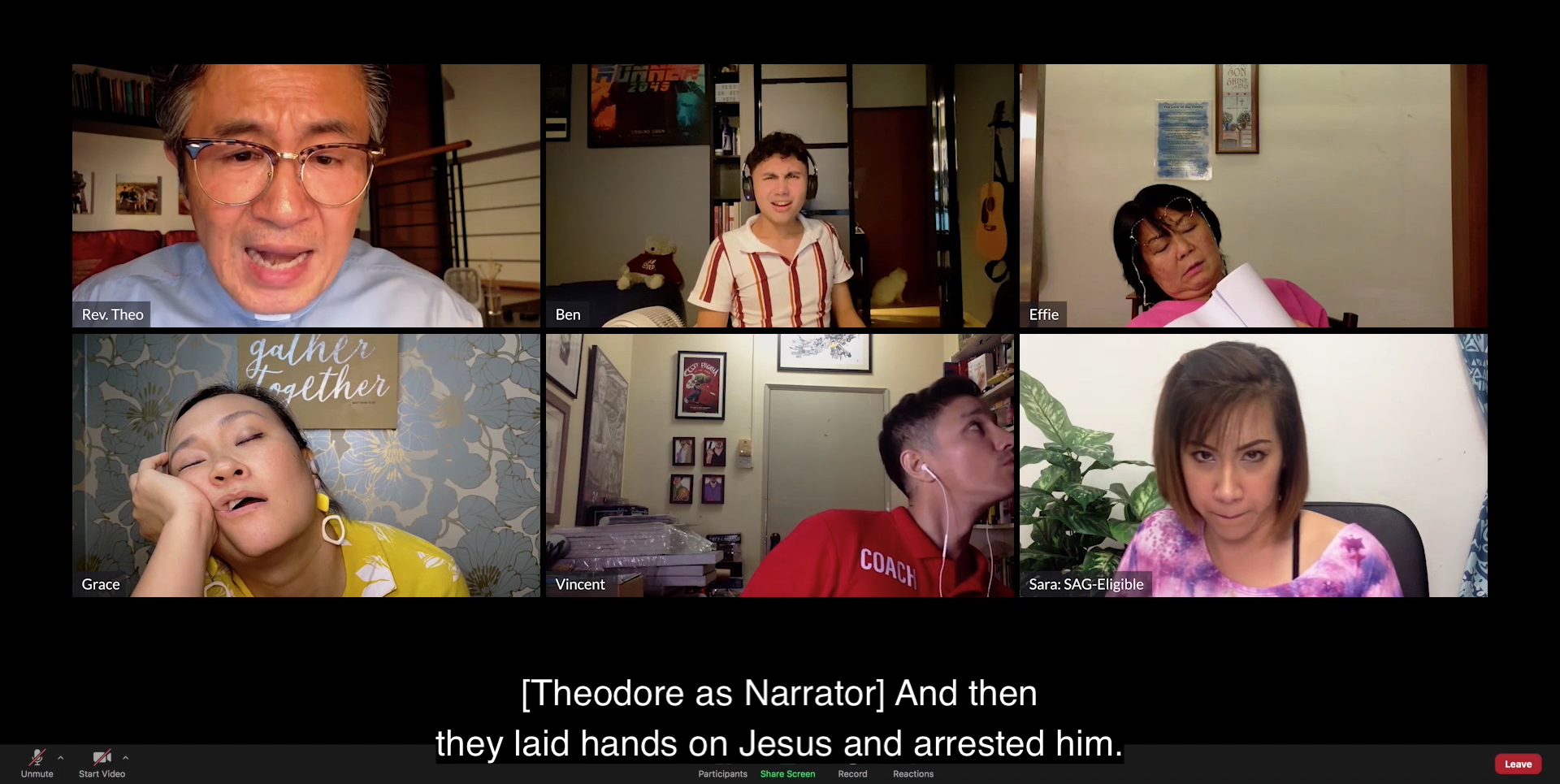 Key to the production is its casting, where all six actors share strong, natural synergy with each other and often come across as larger than life versions of their actual selves, with Tracie’s direction allowing the cast to shine in their roles, alongside strong enunciation. Gavin Yap and Mina Kaye shine as ex-lovers whose romantic pasts are intermingled with an uncomfortably hilarious portrayal of Judas’ betrayal of Jesus. Neo Swee Lin’s Effie, so often in her own world, comes in at just the right time and punctuates scenes with the right punchlines, from not knowing how to turn on her camera to announcing that she’s attending a funeral wake via livestream. Petrina Kow, despite never having worked with Pangdemonium before, allows her natural charisma and can-do spirit shine bright as the effervescent Grace. And Zachary and Adrian, as the most ‘serious’ characters attempting for some semblance of control, allow for a strong point of contrast for the chaos of the others to bounce off against (Adrian’s exasperated, horrified look will be etched in our minds for a while). It helps that the rooms each performer is in are also subtly, but effectively decorated to further reveal their characters, such as motivational Christian posters hanging behind Effie. 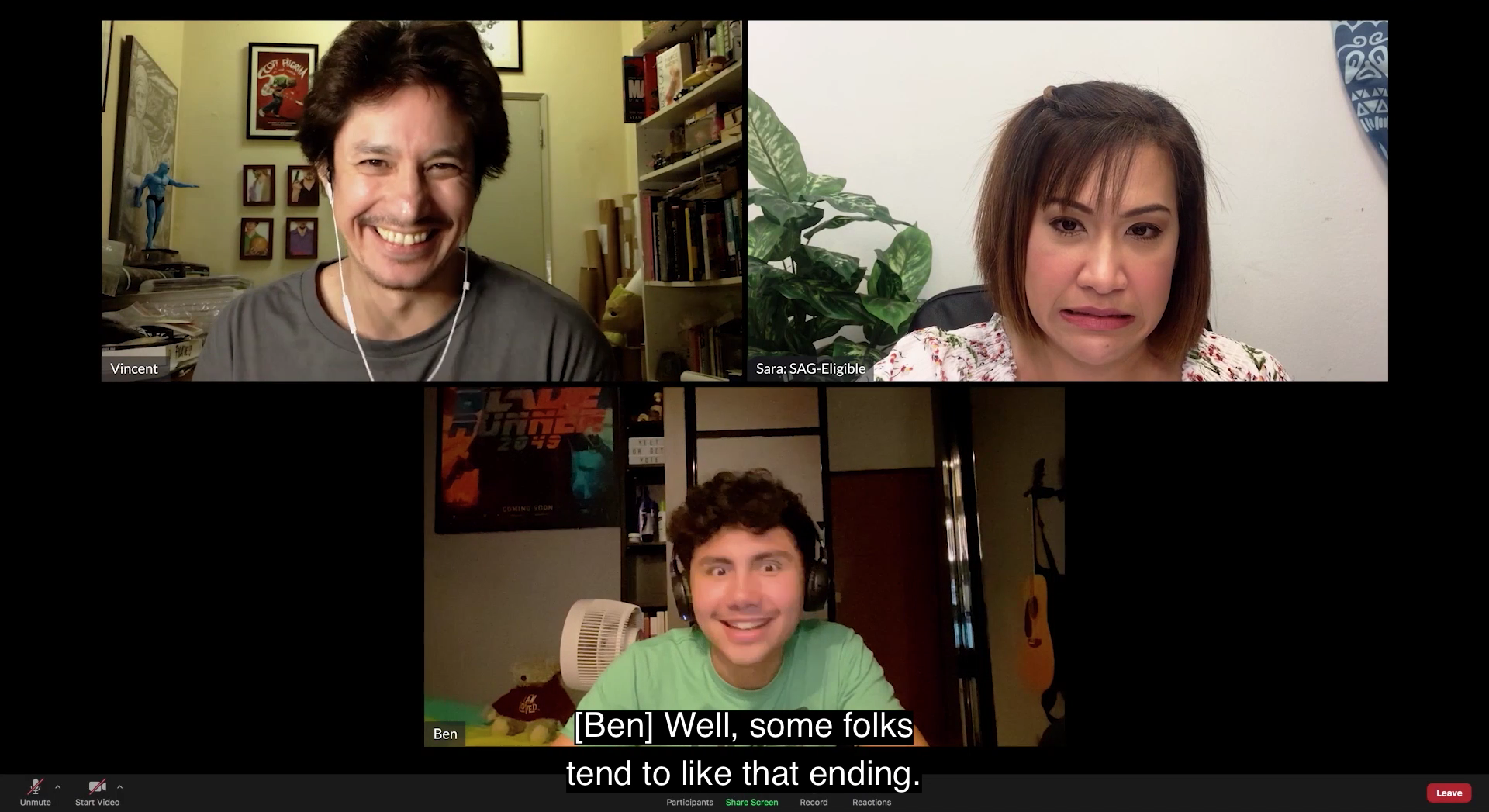 But at the heart of Waiting For The Host, there is also a distinct element of care, concern and hope. The six of them end up undergoing a transformation process, from a messy, confused group of churchgoers, to a close-knit community brought together by the pandemic. The reading is not just a reading, but an opportunity to meet (even digitally) during the circuit breaker lockdown, to share their thoughts and fears with each other, no matter how fleeting, and to know that they’re all going through similar degrees of stress. Making mention of siblings who are frontline workers, the difficulty of judging ‘COVIDiots’, and even the experience of contracting the virus, the production interrogates the grey area we’ve found ourselves in during the pandemic, and how everything we’ve ever known has suddenly become uncertain – even faith itself. Jesus’ iconic plea ‘my God, my God, why hast thou forsaken me’, as he hangs crucified from the cross, rings bleak when said in this context, and prompts careful reflection on whether we can remain hopeful in these dark times, furiously washing our hands and praying. 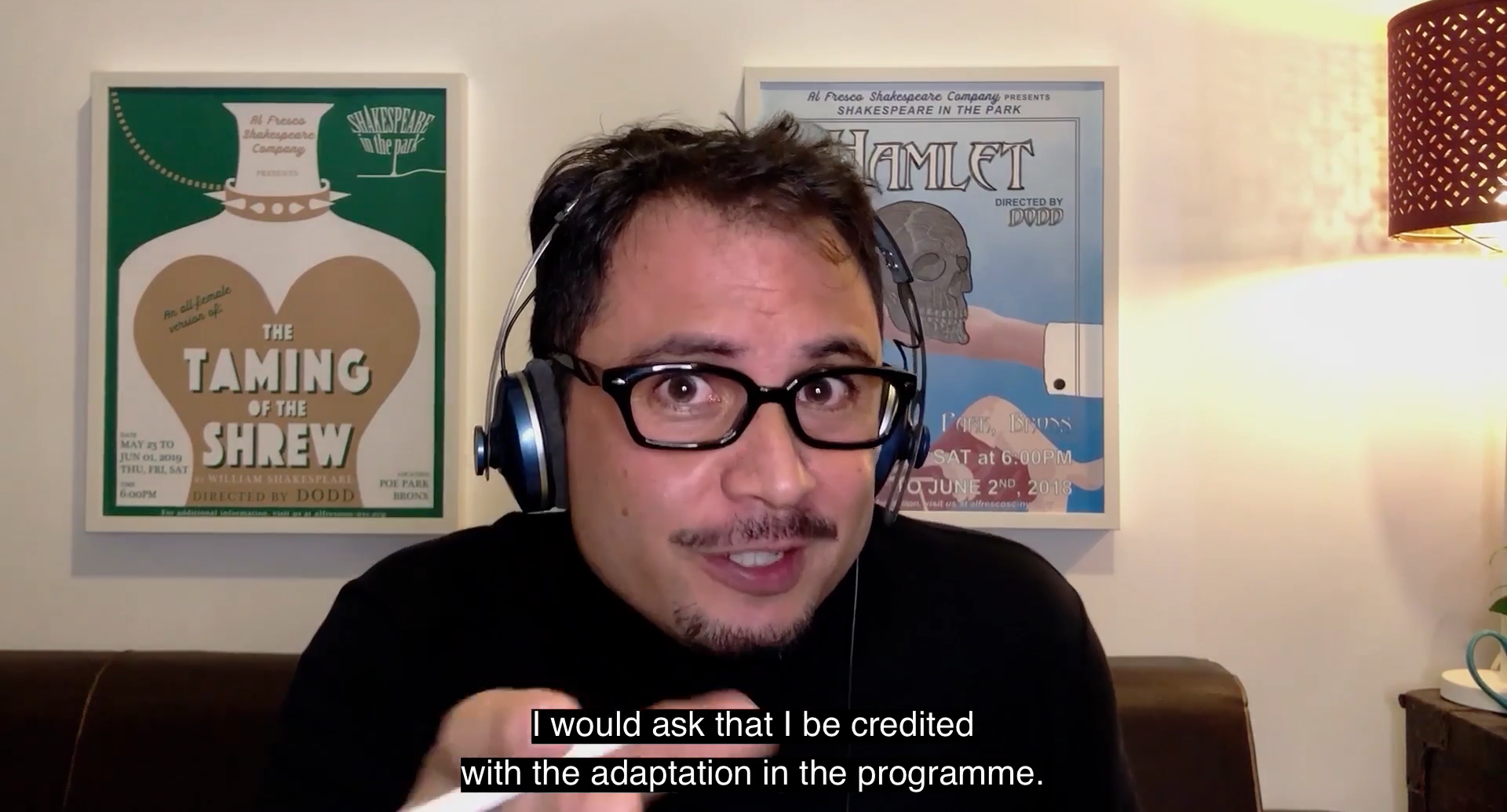 When the group reunites during Phase Two of the circuit breaker to perform a new set of plays, this time they’re joined by Sara’s cigarette-smoking, outdoor theatre director-friend (Keagan Kang, reminiscent of Johnny Depp’s most extreme characters and clearly having fun with this heavily accented, hammed up role). What could very well have been an antagonist is instead organically absorbed into the group as he performs with them, in reimagined bible stories set to laugh out loud musical numbers. In many ways, Waiting For The Host is a reminder of the joy that one can still continue to derive in the presence of others, even when all hope seems lost, and the power of theatre and theatremaking to evoke that positive spirit and sense of community once again. 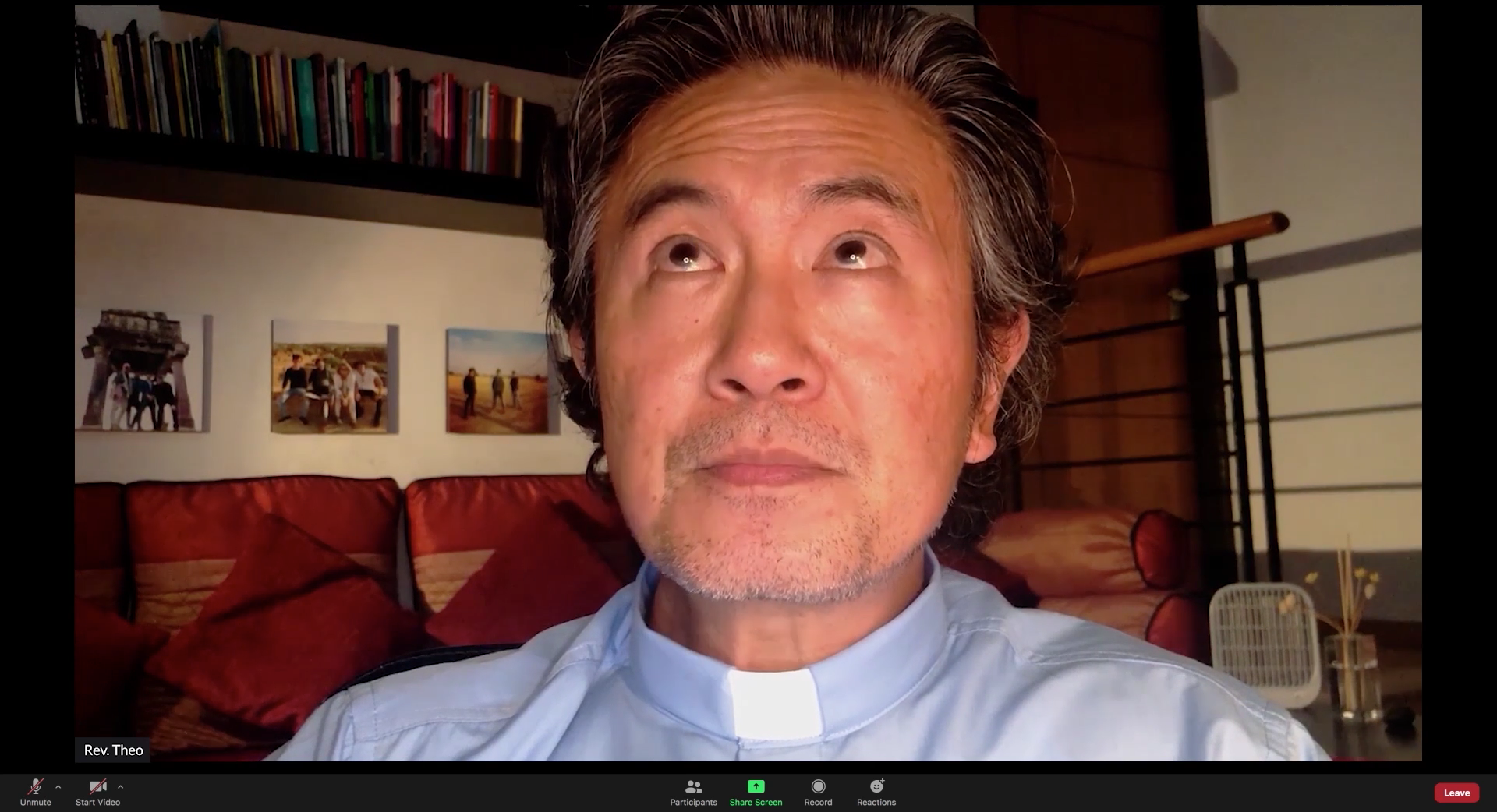 Towards the end of the play, Adrian Pang, as reverend Theo, is given an opportunity to truly let his acting abilities shine. Exhausted from the stress and responsibilities of his job, the reverend finds unexpected solace and pours out his fears and unloads his burdens. Perhaps, there are times we simply need to offer a listening ear when we sense there are those around us who need it most. There is an undeniable poignance to Waiting For The Host as it navigates, with humour, this strange new normal we’ve found ourselves in, encapsulating our fears, the absurdities and most of all, our humanity in a Zoom production. As we hear Mina Kaye’s cover of Amazing Grace, we remember what Adrian mentions in his pre-show message: ‘when life gives you lemons, break open the tequila’. Amidst the uncertainty and pain, we must remember that we are never alone in this, and that we will weather the storm and wait out the new dawn, in the company of others and in the comfort the arts brings.

Waiting For The Host will be streamed online via SISTIC LIVE every Thursday to Sunday, from 15th October to 1st November 2020. Tickets available here

3 comments on “Review: Waiting For The Host by Pangdemonium”