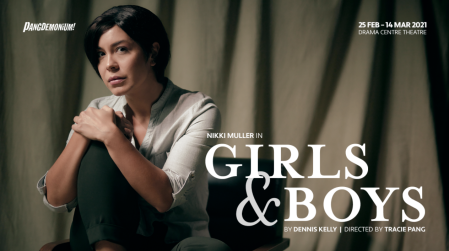 After their digitally-presented, pre-recorded performance of Marc Palmieri’s Waiting For The Host, Pangdemonium has now announced their first live production since 2020’s The Son, and their first ever one woman show set for February 2021.

Directed by Tracie Pang, Pangdemonium presents Dennis Kelly’s Girls & Boys. Originally performed in 2018 at London’s Royal Court Theatre by acclaimed Hollywood actress Carey Mulligan, Girls & Boys is very much in line with Pangdemonium’s curation of plays, as it follows one modern, 21st century working class woman owning her life. She first spies her future husband in an easyJet queue at the Naples airport, finds her way into the film industry, gets married and has two children. It’s the beginning of a beautiful life ahead. But it’s not long before it all starts to fall apart.

Described as both funny and harrowing, Pangdemonium’s version of the play will star Nikki Muller (who last worked with Pangdemonium in The Effect and Fun Home), as she invites you into her home, into her life, and gets ready to tell you a story like no other – the story of her life, her perfect, happy ever after life, until it ceased to be. Get ready as Pangdemonium returns to live theatre with this tour de force performance, as Girls & Boys comes to the Drama Centre Theatre next February.