It’s been about 8 months now since live performance venues were closed due to the coronavirus pandemic. While most artists and performers have either taken this crisis to pivot to different lines of work, or adapt to digital performances, the bottom line is, almost all of them have missed being in an actual space, performing to people live.

And of all the performance mediums out there, it’s perhaps surprising how it is stand-up comedy, often considered the most accessible and popular of genres, that’s taken the longest to come back. But now, thanks to comedians Rishi Budhrani and Sharul Channa, live comedy is set to make a much-anticipated comeback, with The Great Covid Comedy Comeback, a series of four standup comedy performances taking place at the Capitol Theatre this December. 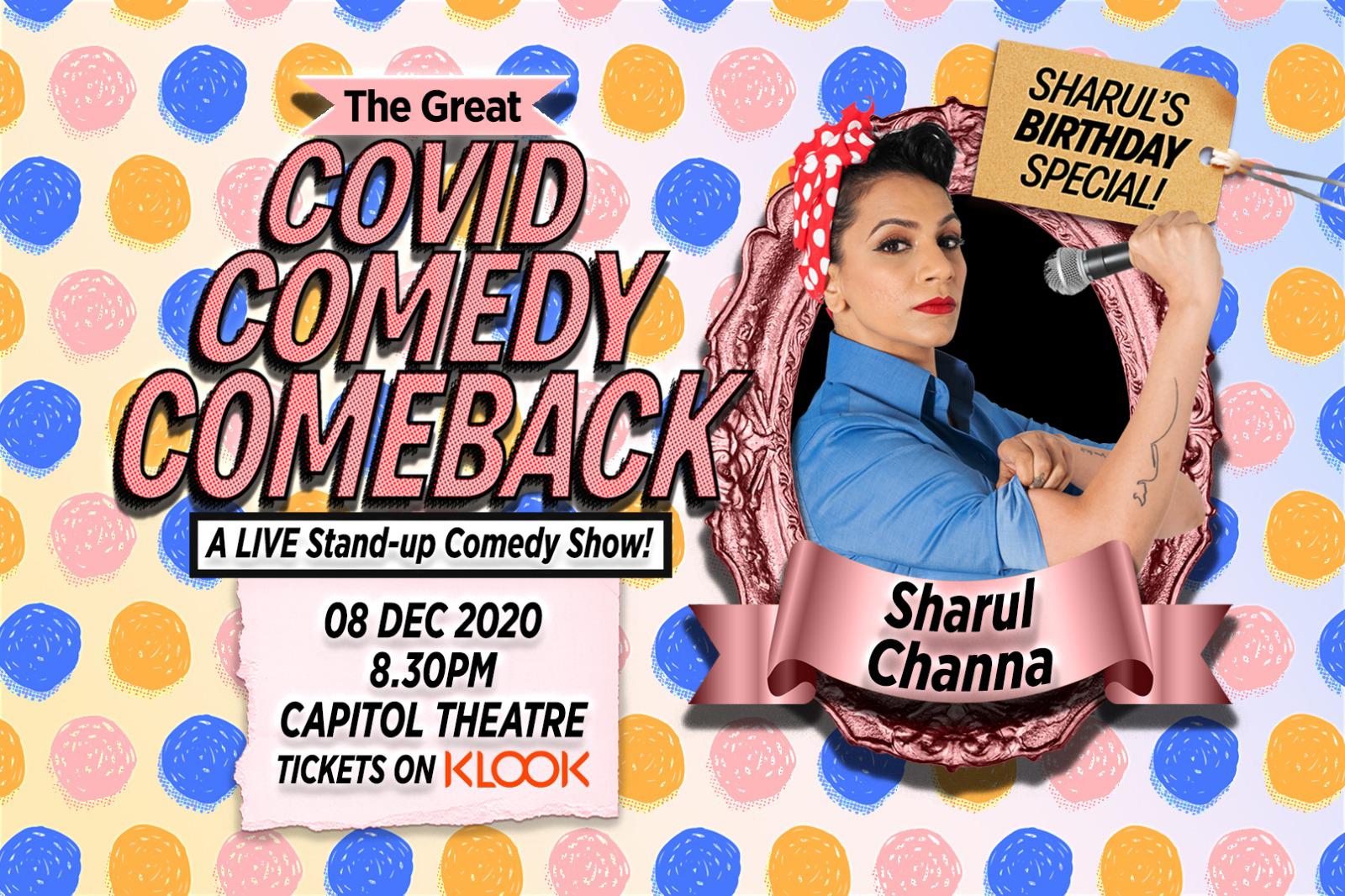 The performances kick off with Sharul Channa on. 8th December, coinciding with her own birthday. “Capitol Theatre reached out to Rishi after live performances came back, and he announced that he was looking for potential venues to host a show,” says Sharul (also Rishi’s wife). “Even though we had only a few weeks to prepare, we jumped at the chance when they offered us slots in December, and this ends up being a kind of joint venture with them. We’ve both been doing digital work online, and our content has been piling up, and once we submitted our scripts to IMDA, we went into production.”

“For this show, there have been so many wheels in my head churning without any specific outcome, planting the seeds with venues and audiences, and making sure that if we produced something, there would be people who would buy tickets and come,” adds Rishi. “It’s been especially difficult for comedians during this time, because you’re your own producer because no one else is willing to take the risk for you. But it’s something myself and Sharul have always trained for, with no managers on our end.” 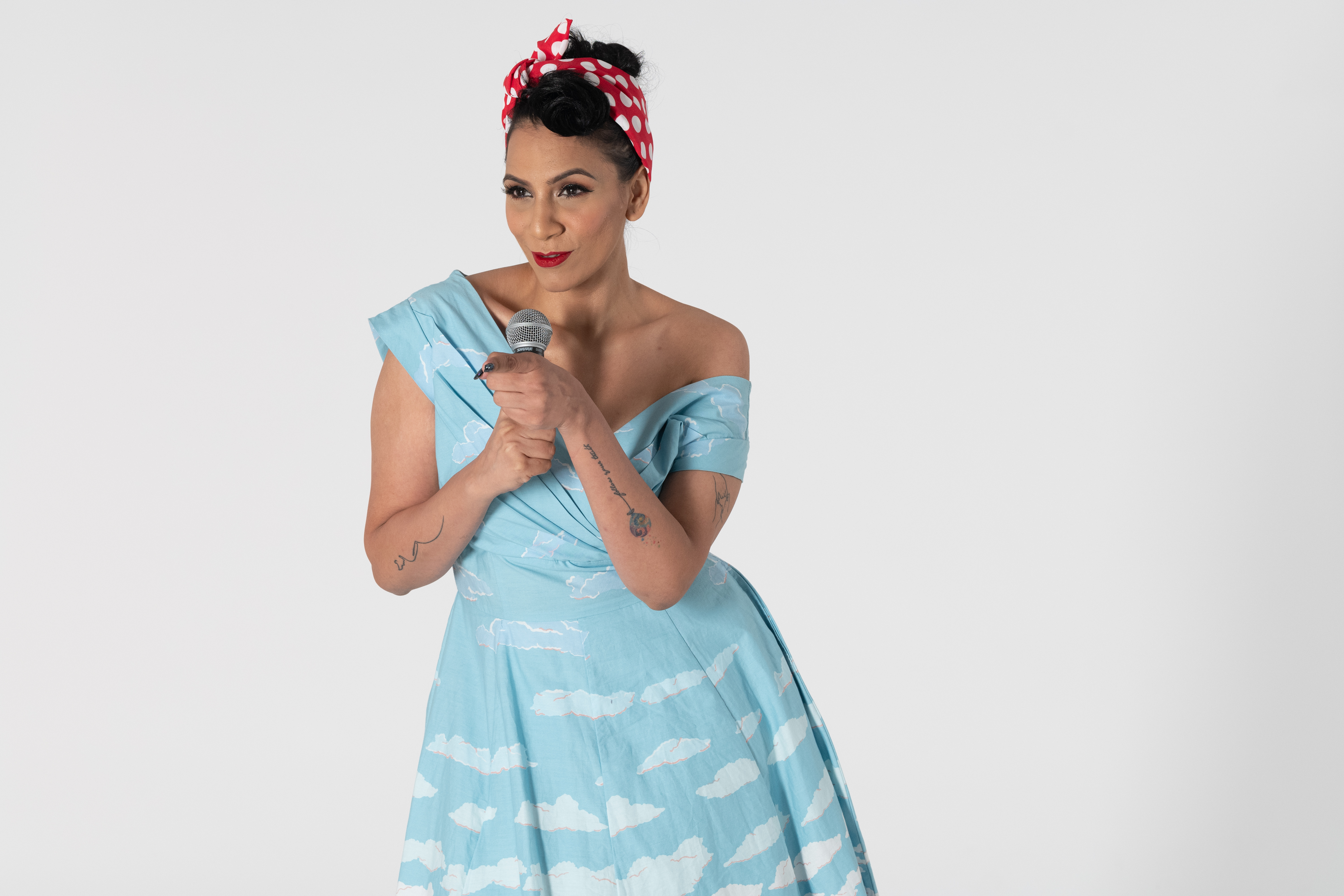 Without a doubt, the chance to get back into the theatres again has been a welcome one. Over the last few months, Sharul has been hard at work, not only adapting her show Am I Old? for Zoom in collaboration with AWARE, but also having performed her new one-woman stand-up show Co-weird Times in September 2020, as part of a new Zoom open mic comedy initiative.

“Some people are purists, but I think that both digital and live shows offer very different kinds of experiences for both audience and performer, not to mention how we’ll probably still be at limited capacity at least till mid-2021,” says Sharul. “Like how when I did Am I Old? on Zoom, people were very active on the chat box, and literally typed responses to every line, unlike in the theatre. That also helps me map out what are the high points of the show and learn to improve each performance from there. I also like to think that I’ve become a better writer because I’ve done so much of that during this time, and putting it on social media. But really, I think people are dying for entertainment, and just want to sit in a space and laugh together to lighten the mood.”

Rishi echoes Sharul’s thoughts, and is just happy to be able to perform in front of a live audience again. “Even during this time, we haven’t stopped working just because of COVID-19; think of it like football during off season; you don’t just stop playing, but you gotta keep playing practice matches and training,” says Rishi. “And while I’ve been working on digital work like The Rishi Report and testing material on Zoom, I’ve also been lucky enough to have gotten a few wedding gigs, which I’ve used as a platform to test some jokes. I’ve been testing material on Zoom, and updating bits or adding follow ups. Just being around people in a physical space is euphoric, and to feel the genuine appreciation people have for human connection again. The process may be different, but I hope the outcome will be similar.”

“This show has been exhausting but exhilarating at the same time, and there’s a genuine drive on my part to make it a good show not just for the audiences but for me as well,” says Rishi. “It’s been hard because even though the theatre is only at 1/10th of the capacity, you still have to pay the same amount of insurance, pay your crew and for manpower, and that’s the hard truth behind the economies of theatre. But we’ve also received a lot of support in kind from organisations we’ve approached, like The Magic Carpet, who’re feeding the comedians over show nights, and Stamping Ground Coffee, who will be sponsoring coffee for the comedians backstage. We’ve even got a potential microphone sponsor, who will be providing custom engraved names on each mic for us.” 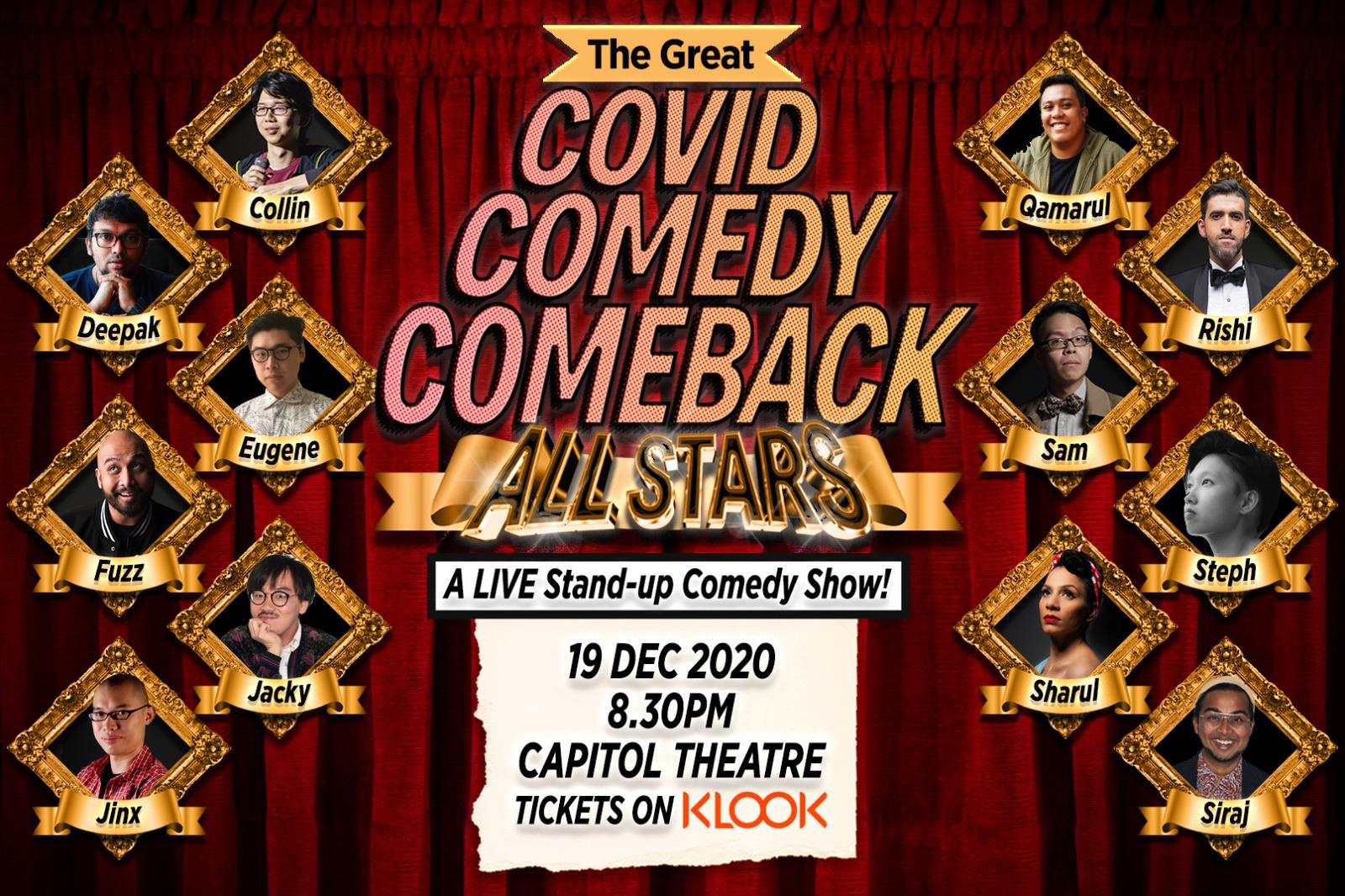 Sharul’s initial show on 8th December will be followed up by solo acts by Fakkah Fuzz and Rishi (on 11th and 18th December respectively, both sold out), before a final All Star performance to round off the series on 19th December, featuring other local comedians such as Sam See, Jacky Ng, and Jinx Yeo. “Jack and Siraj have been my writers on The Rishi Report for the whole year, so they’re the openers on that night. They’ve been working hard and deserve the stage time,” says Rishi.

“During COVID, it really is the arts and entertainment industry that has continued to work hard and beat the odds and challenges to keep people sane. But it’s been hard on us too, and we’ve been trying to cope in various ways, especially with how you get so much pandemic fatigue from performing content in the same house over and over again,” says Sharul. “We’ve lost so much during this time, from a close friend, to the closure of the Merry Lion Comedy Club. As comedians, we are always performing exaggerated versions of ourselves onstage, and as people, we tend to feel very intensely, and are always sharing so much about ourselves. We’re emotional people too, but sometimes, people don’t see that because of the nature of our job. What’s most important is really that we go out there and make people happy again, to get that human interaction again.” 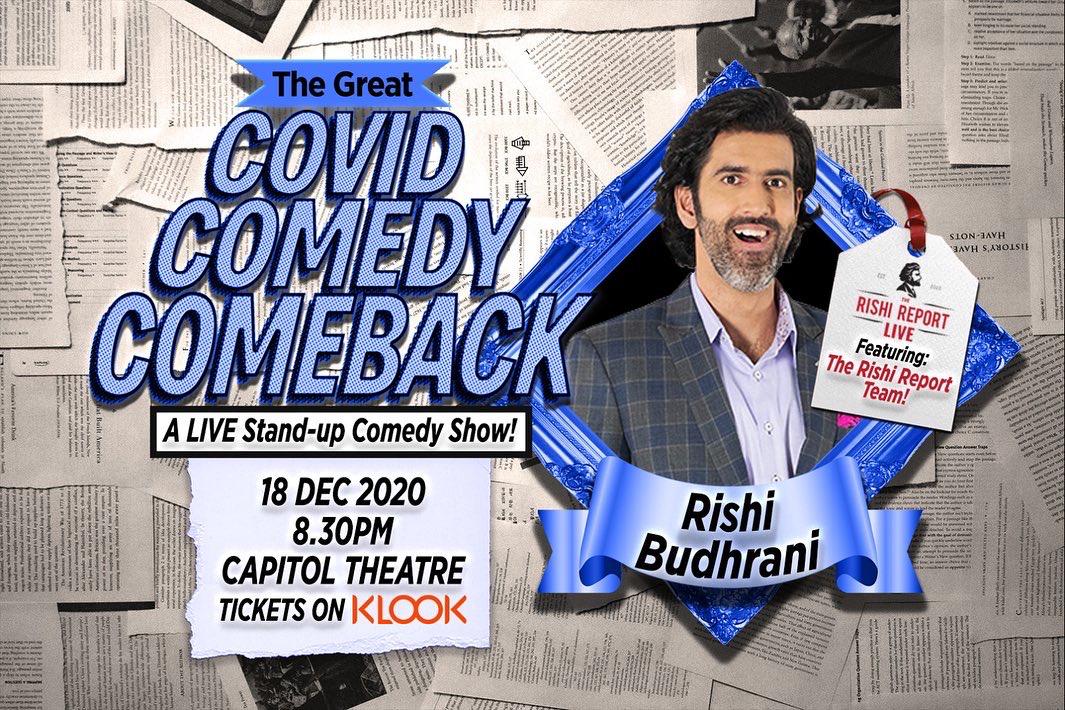 “While the comedy scene still isn’t seen as proper subset of arts industry, but IMDA constantly making effort to see our side of the story, along with having constant dialogue with the officers to get them to understand our concerns,” Rishi continues. “The appeal of our art form is about us making light of the heaviest things. Some become pop culture icons, or influential speakers, but it’s always difficult to take them seriously. It’s a weird paradox, and I’m still figuring it out, but maybe the show is a way to start bridging the gap, change perceptions, and being able to take comedy in a serious way.”

“And that’s why this show is almost like us resurrecting, and rising from the ashes,” adds Rishi. “More importantly, comedy is still a rare career choice for Singaporeans, and I don’t want the next generation of comedians to give up on it. And now, having two sold out shows, it’s a signal of hope to potential future comedians and s a testament to how people have an appetite for it, so the comedy community won’t be disheartened by the year we’ve had. It’s been so important as a tool and fuel for us to continue existing as human beings, and keeping us going on in spite of the challenging year.” 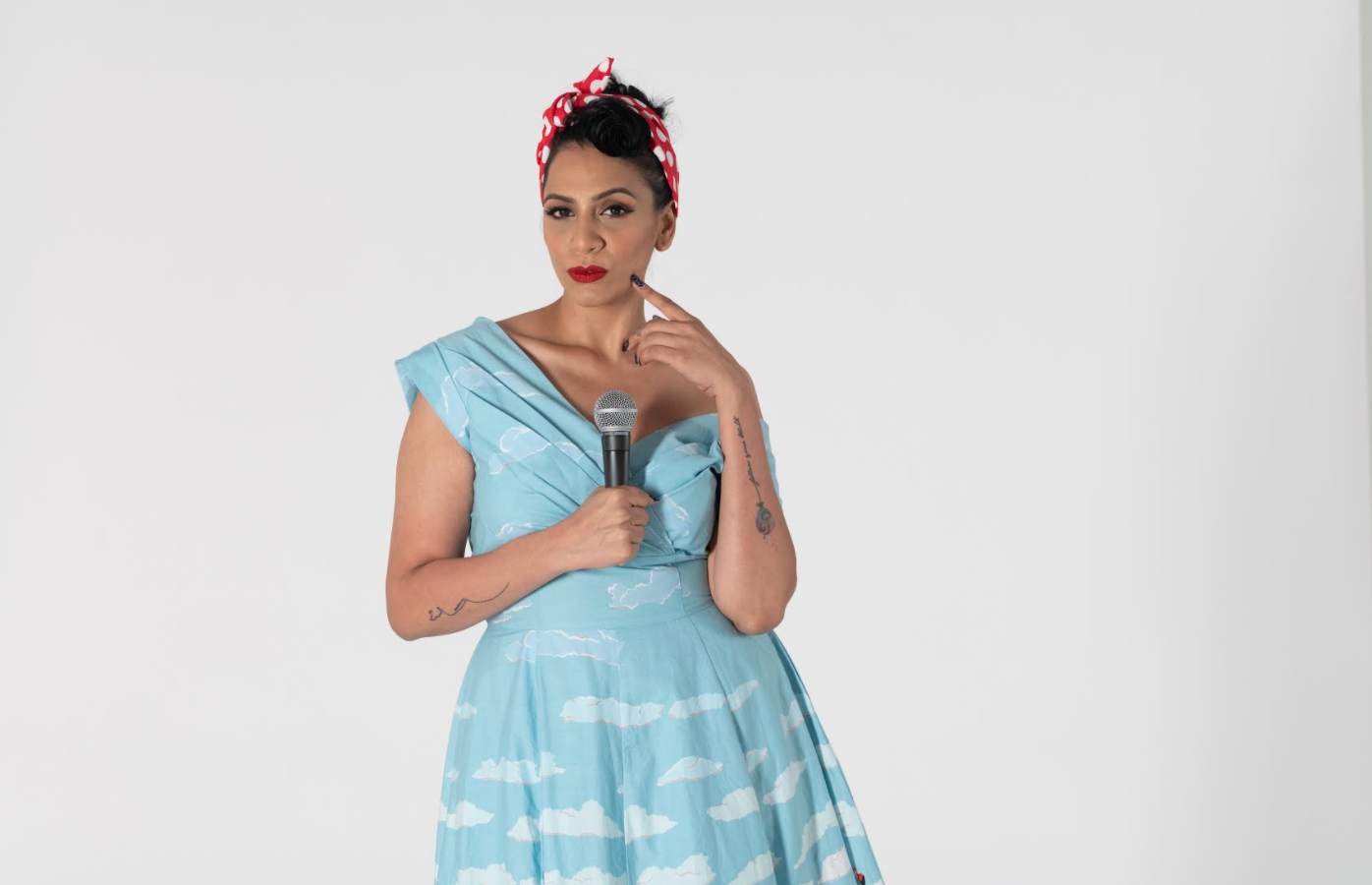 “This show is so important to us all, because it’s been so long since we last saw a live audience in front of us,” Sharul concludes. “I’m looking forward to it, but also afraid I’ll feel so overwhelmed by it all, I’m scared I might even cry! I think going through this period of not being onstage has really made me realise how much we’ve taken for granted the laughter of an audience, and being back onstage will be a genuinely emotional moment. You get validation on Instagram and Zoom of course, but it’s just not the same. All the more I want to make sure I do a good job, and make sure the audiences come back in and laugh.”

2 comments on “To be a comedian during COVID-19: An Interview with Sharul Channa and Rishi Budhrani”