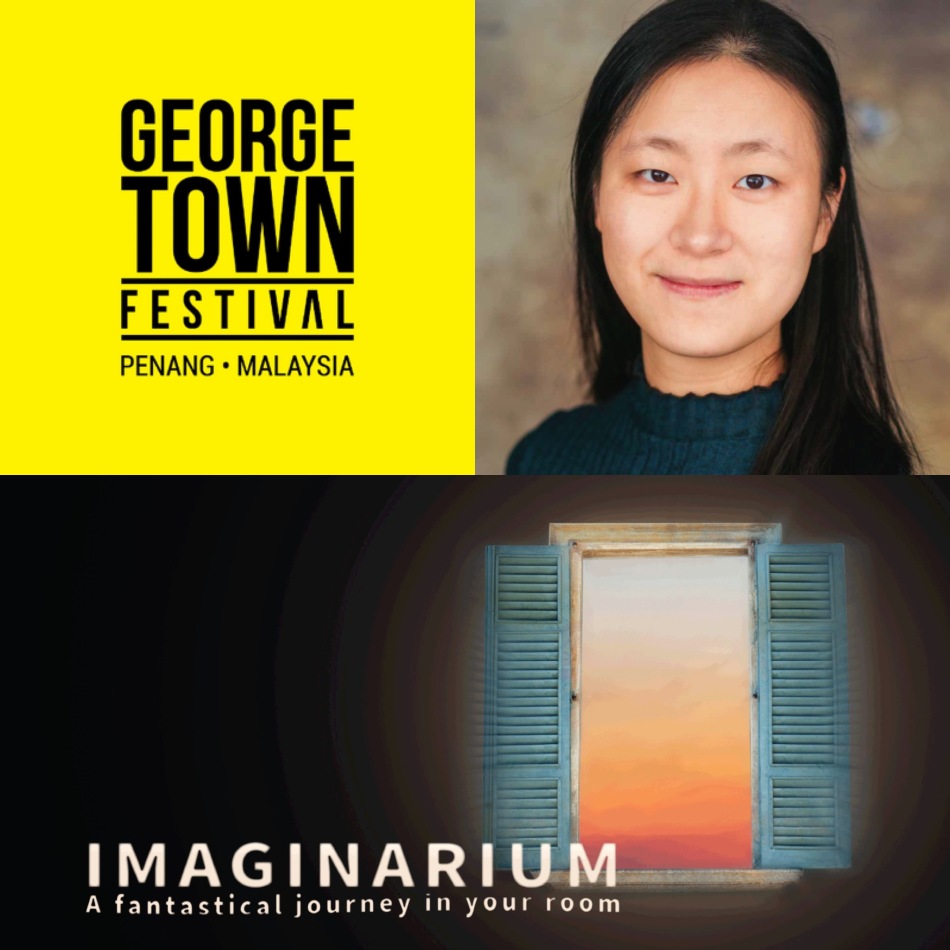 While the 2021 George Town Festival was planned as a hybrid festival, the ongoing lockdown measures implemented across the country have relegated most of its shows to either indefinite postponement, or taken online. And for the general public, it’s all they can do to wake up in the same bed, the same room, the same house, and learn to cope with the seemingly endless ennui that comes with it.

Enter Imaginarium, a new online audio-immersive theatre experience designed specifically during the pandemic for audience members in isolation. The genre itself sounds complicated, but really, the show itself is a matter of plugging in your headphones, and letting creators Out of the Blue Theatre take you on a journey that helps you activate your imagination and see the world from a different point of view.

Speaking to Haylin Cai, co-founder of Out of the Blue Theatre and creator of Imaginarium, we discussed what it was like for the fledgling company to get a chance to present their work at an international arts festival, and how her experience has been like as a Chinese theatremaker who studied in the UK.

“The idea for Imaginarium came about 3 years ago, when I was casually thinking if I could create a show where there’s a character that imagines things, and showcases how wild and complex our mind can be,” says Haylin. “To me, it seemed like a bad idea at first and got shelved quickly. But during the pandemic, it re-emerged again, and I thought now was the best time to go for it, particularly when I realised how much my imagination was running during lockdown, how much I was craving for more sensations, all of which led to this piece.”

“I know that the description says it’s ‘audio-immersive’ theatre, but I think a better definition for the show’s genre would be ‘bedroom immersive theatre’,” she adds. “While a lot of audio experiences out there are just about creating a world to immerse audiences in, Imaginarium is interactive, and doesn’t tell a specific linear story to audiences. It takes you on an emotional journey of the audience, and as you complete the activities we ask you to, we hope it can wind up as a cathartic experience.”

Despite Chinese being her first language, Haylin opted to write the script for Imaginarium in English before having it translated. “Being in the UK for three years helped with my command of the English language, and my collaborators encouraged me to play with the Imaginarium script a lot,” she says. “There’s quite a few segments, and I took a lot of inspiration from various writers, where the rhythm and tone and characters are different in each segment.”

“When we were translating it into Chinese, it was actually difficult for me to do, because stage Chinese isn’t the same as the Chinese we speak regularly. Kind of like how dialects will factor into it, and it’s poetic but different. Even the metaphors used, some work in English but others don’t in Chinese.”

For Haylin, the pandemic has had its fair share of ups and downs for her as a theatremaker, but she chooses to focus instead on the positives. “I think the pandemic has created both obstacles and opportunities for art,” she explains. “Limitations have always inspired creativity, and I don’t think I’ve ever learnt as much as I have during this period, thanks to all the online classes I’ve been taking!”

“During this time, we’ve seen a lot of industries slowing down, and while that’s not good for the economy, it’s also given us an opportunity to reflect on all this,” she adds. “Theatre for example, has been touted as a product that can be used to bring in tourism and money. But then what about theatre that isn’t created for that purpose?”

“And with regards to Zoom theatre…I’m still not a big fan, because of the lack of physical contact or lack of movement within the frame. At the same time, I have seen some work on Zoom that’s been inspiring, in a way that makes me go ‘wow that’s brave and pretty interesting’. And I guess one of the big positives is that it’s given us the opportunity to work with anyone at any time, so that’s good for creativity.”

Speaking about the process of how Imaginarium came to George Town Festival, Haylin recalls how the story began all the way back in her London days. “I went to watch Royal Central’s graduation show, and I met a really good actor from Malaysia. The show itself was so good, I actually watched it three times!” she says. “But because of the pandemic, we all went back to our respective countries, and didn’t really get the chance to work together. Under lockdown, I started to miss doing improv, so I started organising online improv jams with others, and this Malaysian actor ended up joining in. When we learnt that Malaysia went into lockdown again, that Malaysian friend recommended we try applying to George Town Festival, and that’s how we got involved.”

Haylin’s days as a student and artist in the UK are looked back on fondly, thanks to the myriad of opportunities and growth she received there. “I liked the UK theatre industry a lot, in terms of the infrastructure and atmosphere. Sure, I could have chosen to go somewhere like Germany, but I think I wanted to be in a place that championed more diversity, especially in terms of the topics of discussion,” she says, on her decision to study in the UK. “At the same time, it’s very competitive there, so it does balance out.”

“Over in China, there’s much less of an infrastructure for creatives, and they don’t really have a union for equity, or a standardised set of rules to determine payment. I guess every country has its share of challenges, and any director will find it difficult no matter where they are.

“Back in the UK, I was also involved in the fantastic Young Vic Directors Programme, which gave me so much access to workshops and to shadow experienced directors,” she adds. “They’re a very generous organisation who offer a lot of these programmes for free, and even during the pandemic, I still attended lots of high quality online workshops, and got to meet plenty of well-known directors.”

“Still, there was a lack of Asian people in the programme, and even fewer non-British Asians, making me quite the minority,” she admits. “And in general, Asian creatives are still hugely underrepresented in the UK, and I think it’s in part because all the minorities are conveniently grouped under the BAME umbrella.”

“Producers and casting directors then think that as long as you have someone who’s at least mixed race of BAME descent, then it’s enough. But it’s never enough, and being seen as a minority all the time even limits what we can talk about in theatre. People expect a Chinese person to create works about communism or racism, but we’re more than just our race, and we’re capable of producing work that deals with topics like the environment and philosophy.”

Still, Haylin believes that things there are constantly getting better. “There’s definitely an increasing awareness to bring more quality to the process, and I’ve been lucky enough to get some great gigs in my time in the UK,” she says. “When collaborators are genuinely curious about me as a person, that’s when the process becomes enjoyable. Plus, I like to think that Out of the Blue is already a very international company – after all, we’re comprised of members from both the UK and China. We champion diversity and equality, in the sense that we treat each other as fellow human beings regardless of cultures and backgrounds.”

Regarding the future of her Malaysian collaborations, Haylin expresses hope to keep working together, especially after establishing such good ties with George Town Festival already. “I saw some great photos of George Town, and I think it’s a beautiful, diverse place, with a whole new culture to explore,” she says. “It’s wonderful to be able to present my work in this country, and a huge step to be recognised and accepted as part of an international festival, especially as an emerging artist.”

“Naturally, I’d love to be part of the festival again in future, and perhaps even be here in person. I am very lucky and happy to connect and collaborate with people in Malaysia.”

And while Imaginarium is very much a production created during the pandemic, for pandemic audiences, Haylin is certain that it has legs to go much further, and has staying power even if we return to normal. “Imaginarium refers to a space for imagination, and it’s about learning what we can do to make the mundane into something unexpected,” she explains. “From audience feedback of the show, they’ve told me that they now see their bedroom in a different way, and it’s a means of helping you learn to enjoy where you’re staying.”

“There’s a lot of potential to go beyond 2021 – after all, it’s not just about the pandemic, but about how we learn to face things that divide us, whether it’s racism or international borders, all of which were accentuated by the pandemic, but will continue to exist years later. And by taking you on this journey, you as an individual can re-learn how to connect in different ways.”

“If you want advice on success, well I guess there’s something I heard once from one of the National Theatre directors, and that was ‘don’t give up’,” she says. “It sounds simple, but it’s so important – so many people give up before they ‘succeed’, but I believe that it’s important to keep persevering.”

“To me though, a lot of success has to do with the ability to create, something that can be hard when it comes to funding and space and people who all need to be onboard with you. But so long as I constantly find joy and curiosity in what I’m doing, then that’s success to me. It’s always interesting to see what kind of effect theatre has on audiences, and what emotional responses they’ll have.”

0 comments on “George Town Festival 2021: An Interview with Haylin Cai, creator of Imaginarium”