If French philosopher Jacques Derrida were still alive today and caught Germinal, one wonders what the creator of deconstruction himself might have made of the show.

To deconstruct an object or concept, one essentially takes it completely apart in all its complexities, almost like laying out all the parts of a well oiled machine, reducing it to the sum of its contents. What seems like an act that would rob a concept of its charm surprisingly, does quite the opposite, and in line with the 2017 SIFA theme of enchantment, Germinal reinvigorates our world with a newfound sense of wonder by deconstructing the world around us and viewing it through brand new eyes. 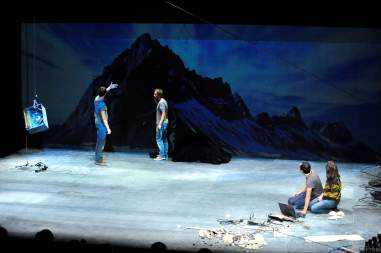 Even through the act of deconstruction and reconstruction, Germinal comes nowhere close to making the monstrously huge concepts of consensus and communication any easier to understand, practically scratching the tip of the iceberg in attempting to even begin work on this gargantuan topic. It is thus to their credit then that what they do manage to achieve of this Sisyphean task in their short 90 minute duration feels surprisingly accessible through their fantastic, light-hearted presentation. In fact, Germinal has so much fun with deconstruction that at one point, the cast quite literally begin taking apart the very stage which it is performed on.

Taking place in a conceptual, closed universe separate from our own, Germinal begins in darkness, before lights slowly begin to illuminate various parts of the long, narrow stage. Eventually, the lighting (designed by Sebastien Bausseron) stabilizes, revealing the cast of four (Halory Goerger, Beatriz Setien, Denis Robert and Jean-Baptiste Delannov) fiddling about with control panels that ‘control’ both light and screens. 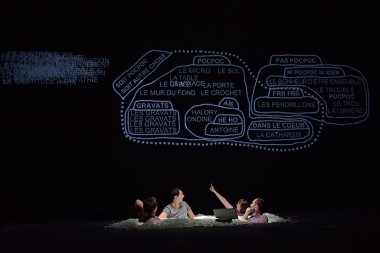 Germinal has no main narrative thrust though, birthed from what feels like a mindmap of deconstruction given life. The control panels are quickly deemed extraneous, and set aside, as the show moves into even more abstract territory. Germinal then goes through an expedited process of conceptualising language, selfhood and communication, beginning with cleverly incorporating surtitles to discuss concepts of identifiers and space for self-expression to an evolution into speech, as the cast discover an entire treasure trove of tools to help them to continue developing their new constructs of definitions, categories and expression. Just to name an example, at one point, the cast attempts to categorize objects based on the sound they make when tapped, quickly leading to an impasse once they realize the futility of a dichotomy.

None of this would be possible of course, without the fantastic tech that Germinal employs. Conceptualized by Julien Fournet and Colin Plancher, every surtitle and projection is carefully mapped and is synced perfectly to the cast’s discussion and development, taking on meaning beyond simple display to hold visual impact and additional significance based off their position, timing and context. While Jean-Baptiste acts as orator for the other cast members’ thoughts for example, the surtitles continue to display their names as originators of the words that appear onscreen, yet it is Jean-Baptiste who is coming up with increasingly lofty daydreams and utilizing their names as placeholders to hide his identity. Credit is also due for set constructors Christian Allamano, Cedric Ravier and Danny Vandeput (Kunstenfestivaldesarts), who must have had a whale of a time reconstructing the set each night after the extensive damage it goes through over the course of the play.

Whether it’s encountering an unhelpful telephone saleswoman attempting to sell them the laws of physics and thermodynamics, a metatextual, self-referential chronological timeline or a laptop that can cause trees to spontaneously burst into existence, Germinal is an incredibly high concept, entertaining romp through the complicated world of semiotics, language and communication, and one of this year’s most intelligent, unforgettable experimental works. Even if you do walk away from the theatre feeling more mind-boggled than ever before, there’s an immense joy in watching the process of deconstruction happen before your very eyes, the germination of new ideas sprouting forth from the tiniest conceptual seeds, and no doubt will fill audience members with a thirst for knowledge with this new exposure to the esoteric world of philosophy.

Germinal will be performed in French with English surtitles at the SOTA Drama Theatre till 2nd September. Tickets available from SISTIC

Germinal
When: Till 2nd Sep, 8pm
Where: SOTA Drama Theatre