As part of their Contemporary/Classics series for their 2017 Main Season, the Finger Players are bringing back Chong Tze Chien’s Poop! this October! Last staged in 2010, this restaging will feature all of the original cast and production team. Masters of applying puppetry in the most ingenuous and creative of ways, Poop! is a heartbreaking, dark fairytale about dealing with grief…but as seen through a child’s eyes.

We managed to get an exclusive interview with director/playwright Chong Tze Chien and cast member Janice Koh to gain a little more insight to the play prior to the show. Here’s the interviews in full below! 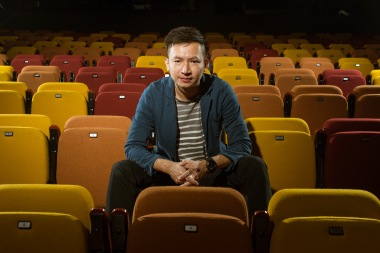 BCM: What inspired you to write Poop, and to give it such a whimsical title despite its heavy subject matter?

Tze Chien: I was approached by actress Jean Ng a couple of years back to write a new play based on her monologue And Buddha Said Mop The Floor. She also introduced me to “The Book of Living and Dying” (a teaching of Tibetan Buddhism) as additional material. To be frank, I was overwhelmed by the depth and length of both source materials, and had much difficulty digesting the information (in both the book and play) to write a play properly. It wasn’t until Jean gave me her blessing to abandon the original brief (to write the play based on her monologue) that I felt free to write.

The first draft of Poop! was produced from a two day writing frenzy. Serendipitously, the draft carried many of the elements in jean’s monologue and “book”. Subconsciously I must have ingested many of the things I read from the source materials, and I only needed to be less reverential to write freely.

It was one of those ephemeral writing processes where the play almost wrote itself; Emily, the protagonist, with her mummy, granny and daddy jumped out of the page right from the get go. Emily steered the piece from beginning to end, looking at life and death through the lens of her young mind; I felt the title of the play should retain the playfulness and cheekiness of a child to reflect Emily’s perspective and attitude towards a heavy subject matter such as mortality. Even though the play’s subject matter may sound heavy, the optimistic naivety of a child shines though, and the title reflects that.

BCM: Being both director and scriptwriter essentially gives you full creative control over the production. How did you ensure that the final product was one that would create a universal experience and not one unique to you and people like you?

Tze Chien: It’s actually quite the opposite as being both a director and playwright is akin to being bipolar, one trying to wrestle control from the other. The director in me sometimes interferes with the writing process, and vice versa when the playwright in me is too precious with this words and resists directorial reinterpretation. But this internal conflict is also the very thing that checks and balances potential blind-sight. The thing which I keep reminding myself is that characters have a life of their own, and both creators (as playwright and director) have to surrender control to these fictional lives and their world views so that the end product is greater than the sum of its parts, and by extension of this argument, bigger than the creators’ worldview. That’s what makes art-making so empowering as artists always strive towards creating works greater than themselves.

What do you personally think is the best way to get over the death of a loved one?

Tze Chien: There are not enough words in the world to describe grief, especially over the death of a loved one. There are different phases of mourning, and the challenge is to get through each one without succumbing to dark thoughts and self-destruction. The important thing is to reach out to one’s own support system in friends and families, even when you think you are strong enough. There’s no shame in being sad and depressed; grief has no expiry date. At some point, this vulnerability turns to strength. An audience who watched the first staging wrote to us; she remarked how much she remembered her loved one from watching the play. She cried during the show not out of sadness but because she remembered the interactions between them when he was alive. For her, the play celebrates the bonds the living have with their loved ones, beyond mortality.

BCM: In the years since last acting in Poop, how have you changed the way you decided to play your character? Is there a specific event or memory that you draw on to enhance your portrayal of a grieving widow?

Janice: I try not to bring any preconcieved notions about the character to the rehearsal other than what I can gather from the script. What I love about Tze Chien’s writing in ‘Poop’ is the surreal and dream-like state of the world his characters inhabit, which makes the layers of emotions and feelings both raw and poetic, but also highly relatable. As the actor, I have always felt no need to ‘put on’ anything other than finding the honesty and truth in his text.

BCM: What do you personally think lies in the great beyond and afterlife?

Janice: Absolutely nothing. As such, I believe in making the most out of this life, and to leave it in a better place than when we first arrived.

BCM: Your public image is that of a strong, independent woman who has it all – a steady career and a happy family. Yet in recent productions you’ve acted in, you’ve been playing troubled women who have gone through emotional hell and back again. Is there a side to you that relates more to these characters, and if so, how do you exorcise the personal demons that haunt you in real life?

Janice: Don’t we all have our personal demons! Acting and performance is my catharsis, but I also enjoy stepping into another person’s shoes and walking a mile in them, even longer sometimes. I don’t always instantly relate to the characters I play, but I like the challenge of sitting with them, studying them, finding where we are the same and where we are different, and hopefully, becoming a richer and more empathetic person as a result. We can’t exorcise all the demons that haunt us, and I certainly try to find it in myself to be equanimous and accepting of what I cannot change. But in the meantime, why not channel those energies to help tell great stories on stage?

Want to catch Janice Koh alongside a stellar cast and playful puppetry in Poop!? We’re giving away THREE pairs of tickets to catch the show on 20th October, 8pm!

To win tickets to the show, all you have to do is: