The hills are alive once again as The Sound of Music returns to Mastercard Theatres this November!

Winning six Tony Awards in its original 1959 Broadway run, including Best Musical, The Sound of Music is arguably the biggest success story of Rodgers and Hammerstein. The Sound of Music is best known to audiences through the critically and commercially acclaimed 1965 film starring Julie Andrews, nabbing five Oscars and still one of the most popular films of all time. Even if you’ve never had a chance to catch The Sound of Music before, you’ll more than likely have heard some of its songs, including “My Favourite Things”, “Do-Re-Mi”, “Edelweiss” and of course, the unforgettable title song “The Sound of Music”.

Last seen in Singapore in 2014, the beloved musical is back with an all new cast, including eighteen Singaporean actors set to play six of the seven Von Trapp children (excluding eldest child Liesl Von Trapp). At the media preview of the show, we were treated to two numbers from the show – “Do-Re-Mi”, performed by Maria and the Von Trapp children, and “Climb Ev’ry Mountain”, performed by the indomitable Janelle Visagie to stunning operatic heights.

As for “Do-Re-Mi”, the children were expectedly, adorable, while Carmen Pretorius as Maria was perfectly cast (more on that later). But it hasn’t been easy for them, working late into the night with countless rehearsals before waking up again for school the next morning, with the cycle then repeating. Said Sophea Pennington, who plays Louisa: “There are times where I have to skip first period because I get so tired. Our parents have been really supportive of us though, and even help collect our homework, which we do in between school and rehearsals.”

Said Mateo Fuentes, who plays Friedrich: “Most of us know each other from beforehand, so during the audition process, there was also this sense of competition amongst us, and we were worried that if some of us didn’t get through while others did. Thankfully, we’re all still friends.”

Ultimately though, it’s been an immensely rewarding experience for all of them. Said Alfie Hodgson (who plays Kurt): “I auditioned for the role back in 2014 but was told I was too short. This time around, I was afraid I’d be too tall, and it’s been a while since I’ve returned to acting and singing, so I’m pleasantly surprised I was called back and will be part of the cast!”

Said Chloe Choo (who plays Brigitta), who was also in the 2014 production and who we last saw in Pangdemonium’s Fun Home: “This has been a really fun experience for all of us. I appreciate how we got to make so many new friends and work with a really professional team.”

This is due in part to Frank Thompson’s acute directorial skills. Thompson has some prolific directorial credits to his name, including The Bodyguard and A Christmas Carol on the West End. Thompson himself was resident director of this production (conceptualized by Andrew Lloyd Webber) during its inception in 2014 at the London Palladium, which even had an incredible mountain set-piece during that run (unfortunately absent on tour).

Thompson has also sung endless praise about Carmen Pretorius, who will be playing the coveted lead role of Maria. “There are some actors who on tour, end up falling back on a kind of automatic acting. But Carmen is special – every time she gets up on stage, there’s an honesty and earnestness to her acting that keeps every performance fresh,” said Thompson.

Watching Carmen onstage with the kids performing a rendition of “Do-Re-Mi”, it was evident that she truly knew how to embody the maternal role, reaching the high notes with ease and a voice that soared. Carmen was in fact, also in the 2014 production of The Sound of Music at Mastercard Theatres, but in the role of eldest child Liesl von Trapp. In the three years since, she’s blossomed into a truly confident actress, quipping: “Although Maria is a much more challenging role, it’s a really rewarding one to play. I’ve grown so much with the production, and I’m incredibly excited to be returning in a new role in one of my favourite musicals.” 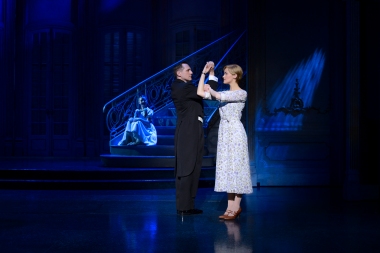 Said Nicholas Maude, who will be playing the role of patriarch Captain Von Trapp: “Rather than pretending to be a character, the way we act is more an extension of ourselves as that character, and I imagine how I would perform as a father to these seven children. There’s something incredibly exciting about live theatre where absolutely anything can happen, and each night is a different experience, where we might say a line differently and we feed off the different energies of the audience.”

On returning to Singapore once again, said Carmen: “Honestly, I love Singapore, it’s actually one of my top three favourite cities to perform in. I love how safe it is and how conducive to happiness it is because of how organized everything is and how it all works.”

Said director Thompson: “We want to take audiences on a journey through this show. The Sound of Music transports audiences to a simpler time before being bombarded constantly by social media and electronic devices, and hopefully, they’ll leave the theatre singing, dancing or both!”

With that in mind, it’s high time to get yourself a ticket down to catch The Sound of Music this month. Whether you’re a diehard fan of the film or completely new to the beloved story of a young nun who brings hope and joy wherever she goes, you’ll be in for a real treat and practically burst with song as familiar tunes fill the theatre. Get your tickets to this incredible musical now, sure to warm even the coldest of hearts.

0 comments on “Preview: The Sound of Music at Mastercard Theatres”